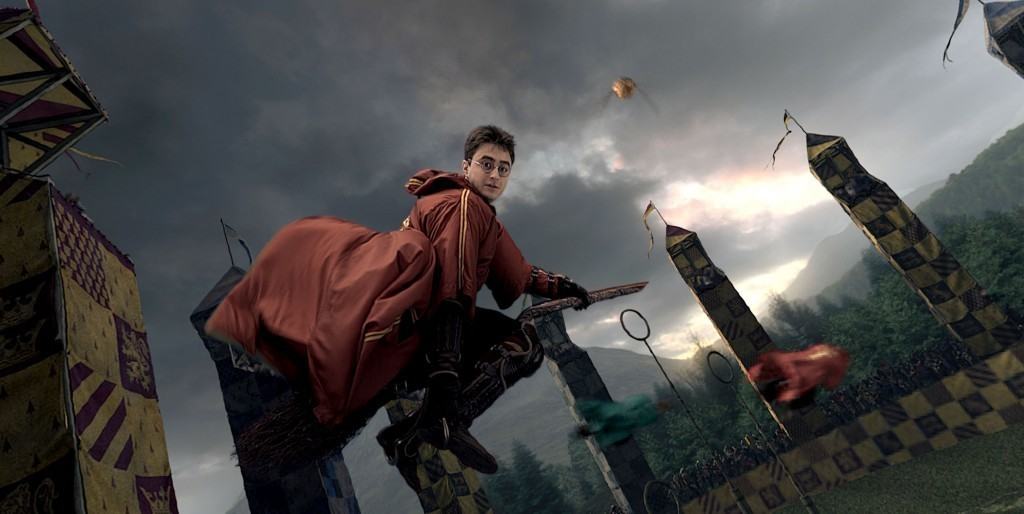 What is Harry Potter and the Forbidden Journey?

The first part of Hogsmeade’s signature attraction is a tour of Hogwarts Castle’s most iconic rooms, including Dumbledore’s office and the Defense against the Dark Arts classroom. The ride itself takes you on a flying adventure around the grounds of Hogwarts, as you dodge Dementors, survive a giant spider’s lair, and face a fire-breathing dragon.

Where is Forbidden Journey located?

In The Wizarding World of Harry Potter – Hogsmeade, which is in Islands of Adventure.

Height requirement is 42 inches; loose articles must be stowed in lockers; Express Pass access; has a single-rider line. For guests who may have difficulty boarding a ride vehicle from the moving platform, a non-moving transfer station is available.

A huge appeal of Harry Potter and the Forbidden Journey lies in its queue, which snakes all throughout Hogwarts Castle and contains nearly as many Easter eggs from the books and films as all the rest of The Wizarding World of Harry Potter – Hogsmeade combined.

Once you’ve entered the castle via the regular line, you’ll walk a very short distance through a hallway meant to be its dungeon (where you can catch Professor Snape’s voice chiding Neville Longbottom) and past a statue of Gunhilda of Gorsmoor, which hides the secret passageway from Hogwarts into Honeydukes (in the source material, at least). After a few steps, you are back outside, in the partially covered section that is Hogwarts’s greenhouse. And though it’s really just a large holding area, there are still details to take notice of, such as the baby Mandrakes ready to be re-planted.

Having navigated the switchbacks through the greenhouse, you’ll enter Hogwarts again through a backdoor. If you’re a dedicated fan of the Harry Potter movies, the sights and sounds will become familiar to you as you pass a statue of Godric Gryffindor, the scorekeeper for the House Cup, and another statue, this time of Salazar Slytherin.

In this extremely detailed office, the scene is set for the storyline of the ride, as Professor Dumbledore introduces you to Hogwarts School of Witchcraft and Wizardry and welcomes all muggles to the school tour. After explaining the purpose of Hogwarts – and commenting on one of its most infamous students – the headmaster informs you that you’re heading next to the Defense against the Dark Arts classroom. Once there, Professor Binns “will condense hundreds of years of Hogwarts history into a few short hours.” I hope you brought your quills and parchment to take careful notes!

Defense against the Dark Arts classroom

In this room, you’ll await the arrival of Professor Binns and his Hogwarts history lecture, but Harry, Ron, and Hermione appear instead – they sneak into the room underneath the Cloak of Invisibility (look for the door to the right cracking open) and unveil themselves in front of everyone.

The trio of students suggests that instead of staying for Binns’s “very boring” lecture, you should join them to watch the Quidditch match instead, and they arrange to meet you in the Room of Requirement. Having set the new plan, they slip back under Harry’s cloak and sneak out the door.

The Fat Lady and the Daily Prophet

From the Defense against the Dark Arts classroom, the line moves through a small hallway. In the first part, you see a portrait of the Fat Lady, who guards the password-protected entrance to the Gryffindor common room, as she picks up the storyline and gets excited about the upcoming Quidditch match you’ll be attending. Further down the corridor is a cabinet filled with Quidditch supplies and a bulletin board with a copy of the Daily Prophet pinned on it.

For those who have been sorted into Gryffindor, entering the common room may be a dream-come-true. The talking portraits are back, and they are chatting about the Quidditch match, and, perhaps more importantly, they also start directing the conversation toward you, bringing to your attention the upcoming ride’s safety parameters.

If you selected the single-rider line, this is where you’ll enter once you climb the stairs from the sorting area at the entrance to Hogwarts. In this room, Universal team members will stop the lines and parse them into the final staging area for the attraction. If necessary, children’s heights will be double-checked, and there is a set of test seats, as well.

You are now at the final stage before the ride! The line moves through a short hallway, where the Sorting Hat looks down at the queued guests and recites Forbidden Journey’s safety spiel – in rhyme, of course.

Standing in the final staging area, you’ll wait your turn to board an enchanted bench that will take you to Hermione. A Universal employee is here, separating groups into parties of four guests. (Odd-numbered parties will be joined by a single rider.)

(After you disembark the ride, you’ll walk down a set of stairs and into Filch’s Emporium of Confiscated Goods, which serves as the attraction’s gift shop.)

Harry Potter and the Forbidden Journey takes you on a flying adventure throughout the grounds of Hogwarts on a magical, enchanted… bench. Once Hermione has magicked your seat, you’ll be whisked through the Floo Network up to the Observatory, where the plan to make it to the Quidditch match quickly goes awry. You’ll encounter the familiar sights of the most famous school for witchcraft and wizardry as you dodge the Whomping Willow, zoom around the Quidditch pitch, and come face-to-face with soul-sucking Dementors, in a combination of physical sets and screen-based moments.

The visible ride vehicle for Forbidden Journey is deceptively mundane, as it sits above one of the most technologically advanced ride systems ever created – a KUKA robotic arm that runs along a ride track, providing an extreme amount of motion as it dives, turns, and pivots your bench. While you do not go completely upside-down, you will be tilted in just about every other direction you can think of. If you are prone to motion sickness, you may want to do some research online to see how other riders have coped with the experience.

How scary is Forbidden Journey?

We would rank Forbidden Journey five out of five Dementors in terms of scariness. Close encounters with over-sized spiders and those pesky Dementors, along with the unique ride motion, can make the experience as scary as it is amazing.

What was Forbidden Journey’s opening date?

When originally designed, Harry Potter and the Forbidden Journey had many more Dementors, including the ones painted on the walls in ultraviolet light that were originally going to be activated by the ride vehicles. However, Harry Potter creator JK Rowling and Warner Bros. deemed them too scary, so the Dementors remain dormant on the walls to this day.

I first rode this in 2011, and as both a thrill-seeker and Potterhead, this was quite an experience. The queue is beautiful, and the ride itself is awesome.

by phillip painter on Harry Potter and the Forbidden Journey
forbidden journey
Date Of Last Visit: 7/13

ok, not a big harry potter fan, haven't seen the movies,the ride swings up and down through different rooms, the castle and walk thru before the ride to me is better than the ride, love the area and the shops, it's like you are separated from the rest of the park

by Patrick on Harry Potter and the Forbidden Journey
Truly Magical
Date Of Last Visit: 7-12-14

One of the best rides ever created, the Forbidden Journey is a truly unforgettable experience. Everything from the ride cue to when you first sit down is incredible. The ride system is not one used by many other big name theme park operators, making it truly unique. This ride manages to deliver an experience that everyone can enjoy, especially anyone who enjoys Harry Potter. Even if you aren't a Harry Potter fan, this ride is definitely a must see, as it's truly one of the greatest theme park rides ever crafted.

by sasha donner on Harry Potter and the Forbidden Journey
best ride EVER!!
Date Of Last Visit: July 2013

If I could give this more than 5 stars I would. This is my absolute favorite ride at IOA...wish we could use the fast passes but it's TOTALLY worth the wait. Even if you aren't a big Harry Potter fan (whicbi am a huge nerd when it comes to HP) you must ride this ride!

There isn't much I can say that hasn't already been said. The special effects are impeccable and the detail is amazing. Basically, this ride is a must (for all the reasons stated below and more!!!). I think I rode this thing 13 times... and probably could have gone 13 more HAHA!

Page 1 of 12:
«
‹
1
2
3
›
»
Do you have a question about the information on this page, would like to provide feedback, or did you spot an inaccuracy? Please let us know by posting in our Orlando Informer Community on Facebook.
OI Universal Center » Islands of Adventure » The Wizarding World of Harry Potter – Hogsmeade