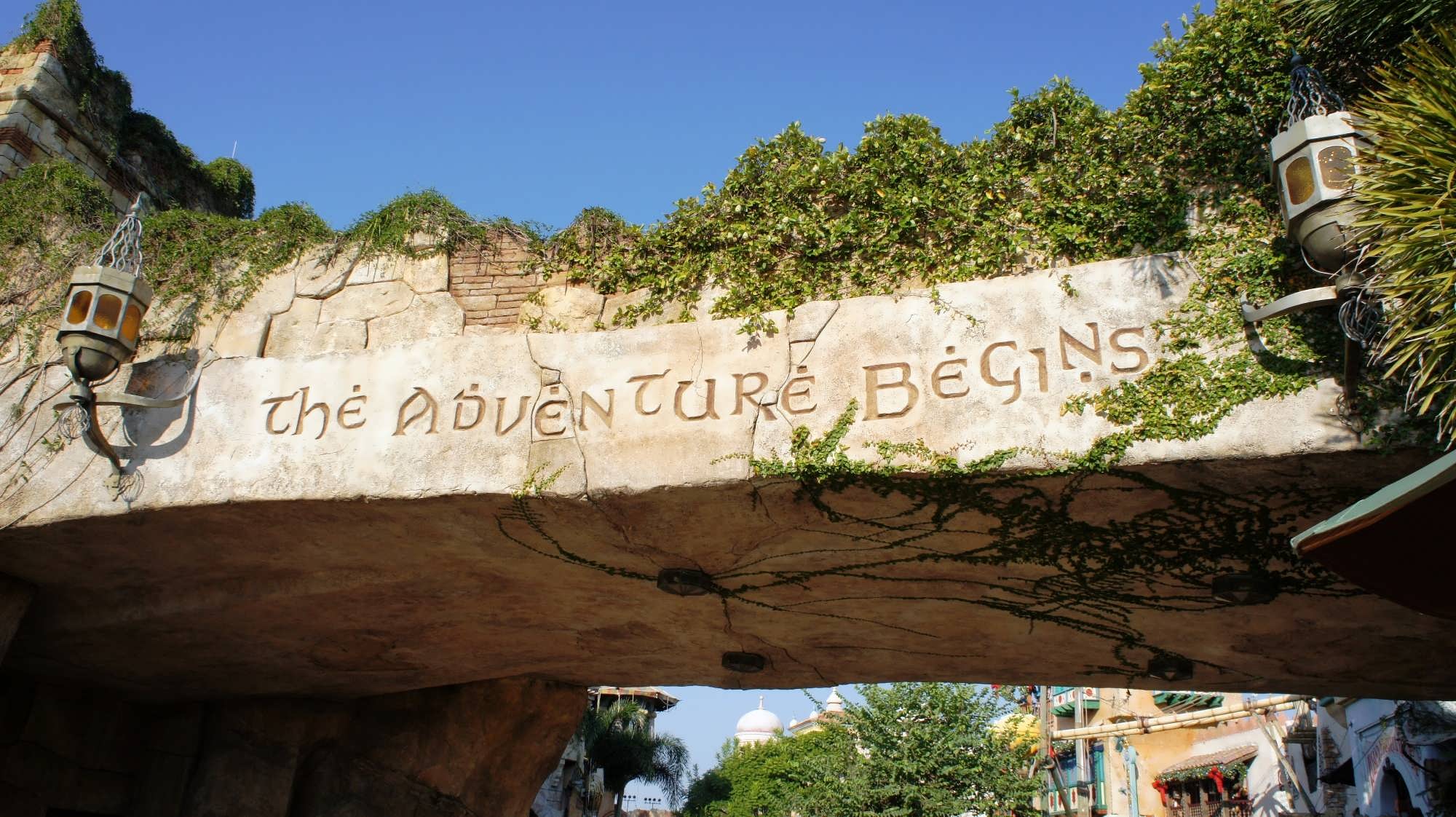 Port of Entry at Universal’s Islands of Adventure.

Take an unforgettable journey through the uniquely themed islands of Universal’s Islands of Adventure, where the world’s most cutting edge rides, shows, and interactive attractions bring your favorite stories, myths, cartoons, comic book heroes, and children’s tales to life.
This page includes a history of IOA , common misconceptions, and a description of the park’s layout. When you are done here, use the navigation links at the top or bottom of the page to continue your training.

Islands of Adventure – a history

The most highly anticipated piece of this addition was the second theme park, Islands of Adventure, which would occupy 110 acres. Although Universal worked to keep the plans for the new park quiet, enthusiasts and reporters were able to glean information from plans filed with the city of Orlando’s building department. In 1997, two years before its opening date, the Orlando Sentinel broke the news that Islands of Adventure would be divided into five “islands” placed around a lagoon. Each of these areas – including Isla Nublar, Toon Lagoon, Superhero Island, Seuss Landing, and the Lost Continent – would be home to at least one attraction, with Isla Nublar housing one rumored to be themed to Jurassic Park. Universal media relations refused to comment on the news leak, and Universal staff members began blacking out details on blueprints the company was required to submit to Orlando officials in order to prevent further information from being leaked. Weeks later, however, the company conceded the battle for secrecy and held a media event for journalists from around the world to officially reveal details about the park.

At the grand unveiling of a preview center at Universal Studios Florida, park officials discussed the high-tech attractions and thrill rides planned for the new attraction. Tom Williams, the president of Universal Florida, stated that ”[t]here’s a tremendous amount of creativity and innovation wrapped up in the new park” (Shenot, Universal’s New Adventure: Hang With Spidey and Pet A Dinosaur, 1997). With a price tag of $1 billion, the park would feature top-of-the-line technology to bring guests new experiences including an Incredible Hulk launching coaster, Dudley Do-Right’s Ripsaw Falls (the first flume ride designed to plunge guests below the water’s surface) and a 3D Spider-Man ride utilizing motion-simulators and an immersive ride experience that would send guests on a journey through New York.

At the news conference, Universal officials confirmed rumors that, while the park would offer a number of thrill rides, Islands of Adventure would be more focused on families with young children than was Universal Studios Florida. Officials also announced that the rumored Isla Nublar would actually be named Jurassic Park, featuring a play area for children, a river ride, and an animatronic triceratops.

Beginning in March 1999, Islands of Adventure hosted a limited number of guests for soft testing before an official opening date was even announced; Universal did not want a repeat of the disastrous opening day of Universal Studios Florida in 1990, which had resulted in 10% of guests requesting a refund due to attraction closures. This gave the company time to “tinker with rides and the other logistics involved with running a theme park” (Barker, Universal Says It’s Time to Let Real Adventure Begin, 1999).

On May 28, 1999, Islands of Adventure officially opened its doors to the public. Though the park was scheduled to open at 9 a.m., it opened an hour early to accommodate hundreds of guests who had lined up to enter the park in the early morning (Barker, 1999). The soft-test “tinkering” was successful; opening day had few attraction issues, with only temporary closings of the Eighth Voyage of Sinbad, Poseidon’s Fury, and Dudley Do-Right’s Ripsaw Falls causing glitches throughout the day (Barker, 1999). The most popular ride that day, with an average wait time of around 40 minutes, was the Amazing Adventures of Spider-Man, which had been highly anticipated by theme park goers and comic book fans alike (Barker, 1999).

On opening day, ticket prices for the park were set at $46.64 for adults and $37.10 for children, with children younger than 3 being permitted free entry. Guests hoping to visit Universal Studios Florida would need to buy a separate ticket, available at a similar cost. Universal officials had high hopes that the new resort would bring in more guests who would be willing to spend more time at the complex, as they had aimed to create an environment where guests could enjoy themselves from early in the morning (at the theme parks) until late into the evening (at Universal CityWalk).

CURRENT ERA
Despite the compelling lineup of attractions and the hiring of ex-Disney Imagineers to help design them, attendance at Universal’s new park was sluggish — and the park itself remained virtually unchanged for a decade. It wasn’t until June 2010, when Islands received its first expansion, that its popularity exploded and the star of the entire Universal Orlando Resort started to shine: the Wizarding World of Harry Potter (now formally called the Wizarding World of Harry Potter – Hogsmeade, to help differentiate it from its Diagon Alley sister area at Universal Studios Florida) opened to much fanfare and unbridled success. The new island, which was comprised of most of the neighboring Lost Continent’s land and some undeveloped acreage, took Imagineering to the next level by actively incorporating quick-service restaurants, gift shops, and even restrooms into the overall themed experience. When combined with scores of unique – and high-profit-margin – merchandise, Universal officially entered the big leagues, which were hitherto only manned by Disney.

The new influx of revenue and mainstream media attention has caused NBCUniversal and its owner Comcast to invest in its theme parks in ways that it never has before. With the 2014 opening of Diagon Alley, a new Hogwarts Express attraction links the two Wizarding Worlds together, marking the very first time ever that multiple geographic locations connect in one seamless experience. And while most of the post-Harry Potter construction will continue to be centered on next-door Universal Studios Florida for the next several years, Islands of Adventure will also see its share of further expansions, starting with Jurassic Park in 2014-2015. Universal is also actively considering varying plans for Seuss Landing, which may very well receive its first new addition in 15 years, and for Toon Lagoon, which might get replaced by an entirely new property.

With the continued presence of such mainstays as the Incredible Hulk Coaster, Harry Potter and the Forbidden Journey, and the indelible Mythos restaurant, along with the bevy of impending new attractions that are fully expected to be modeled on the Wizarding World of Harry Potter theming template, Islands of Adventure has a future that looks brighter with every passing year.

The biggest misconception about Islands of Adventure is really not as much of a misconception as it is a lack of conception. Many guests just do not have any idea what Islands of Adventure is. Now, the Wizarding World of Harry Potter has certainly help define the theme park in the minds of a lot of people. Nevertheless, uninformed guests often think IOA is a water park or other type of entertainment center. (The water park misconception is helped by the fact that there is a water park called Adventure Island next to Busch Gardens Tampa Bay.) To put misconception aside, let me tell you that IOA is a regular theme park like USF , which features a mix of rides, attractions, shows, and entertainment for kids.

The second misconception regarding IOA is the same as the second one for USF : there is nothing for kids to do here. Well, you can throw that misconception right out the window once you realize that there is an entire island just for kids called Seuss Landing. And that’s not all. See our Visiting Islands of Adventure with kids page to learn more.

Islands of Adventure – layout
IOA is made up of six distinct areas, or “islands”, surrounding a large lagoon — this is similar to Universal Studios Florida with its six sections surrounding a lagoon. Port of Entry is the first and smallest of the areas, and is more of a shopping district then one of the full-fledged islands. At the end of Port of Entry, you have the IOA lagoon in front of you. Heading to the left brings you to Marvel Super Hero Island and then on to Toon Lagoon. Next is Jurassic Park, at the very back of the theme park. The next area is the Wizarding World of Harry Potter, followed by Lost Continent, and finally Seuss Landing. Much like USF , there is not a right or wrong way to go around IOA . If guests are interested in the Wizarding World, this is usually the first stop. Guests not interested in the Wizarding World generally start with Marvel Super Hero Island. 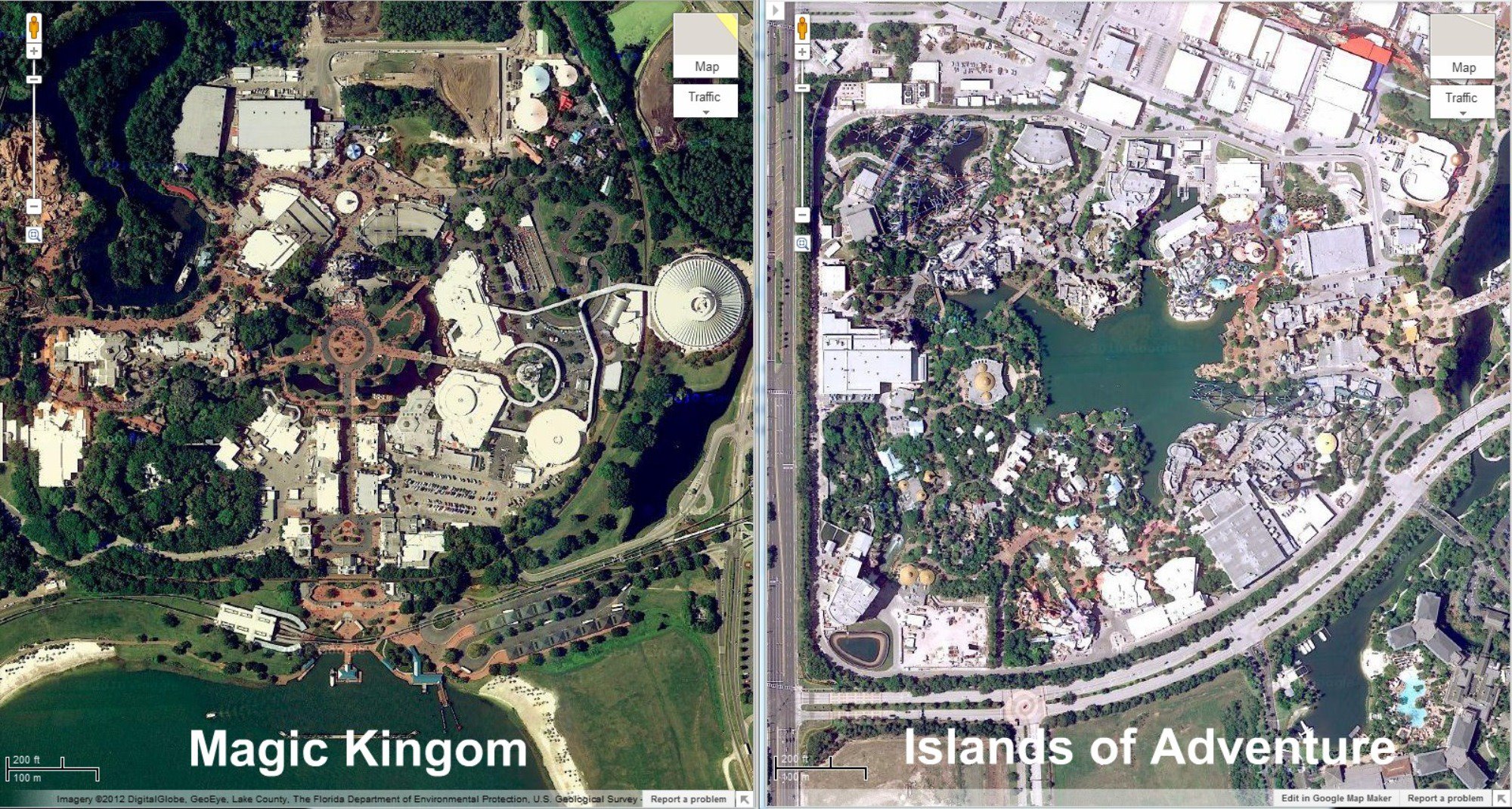 Magic Kingdom and Islands of Adventure side by side.

Islands of Adventure – map
Click any marker to display the attraction or venue name. To scroll or zoom, use the controls on the top-left of the map. You may also switch to different map views by using the buttons on the top-right of the map.

3 best (and most unusual) replacements for Toon Lagoon