The future (and past) of Wet ‘n Wild Orlando
Just because providing a general overview of Universal’s upcoming built-from-the-ground-up water park, Volcano Bay, and pinpointing one of its 13 rides simply isn’t enough, this week Screamscape has reported on what its sources are whispering in its ear – and it’s quite exciting, to say the least.

Back in the late 1990s, when Universal was not only going full-out in expanding its single-park Universal Studios Florida into the full-fledged Universal Orlando Resort, but also in acquiring an additional 2,000 acres of land down south to convert into a second resort (you can get the full details here),the company’s goal was a simple, albeit daunting, one: reach parity with Walt Disney World Resort. Since multiple theme parks, a dining/shopping/entertainment district, several on-site hotels, and, even, various sporting complexes would be taken care of, there was still one final component that needed to filled – a water park. Rather than building one from scratch at considerable expense, Universal decided to do the next best (and far quicker) thing: buy one from another company. 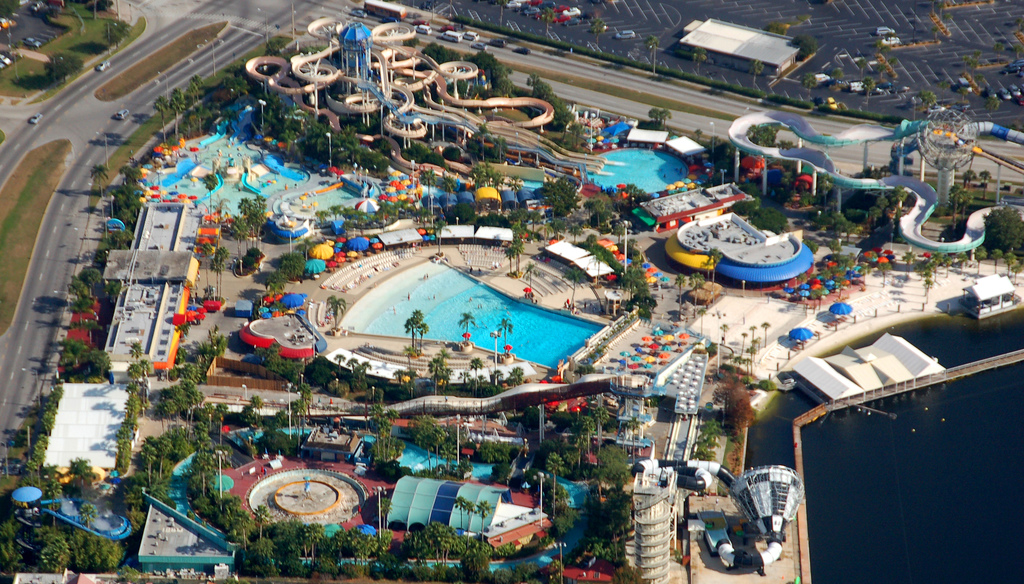 Wet ‘n Wild Orlando, as it turns out, has a history that is nearly as involved and as momentous as is Universal’s. Created by George Millay, the driving force behind SeaWorld (which, ironically enough, started in California nearly a decade before moving over to Florida), Wet ‘n Wild was, at its opening in 1977, the first modern water park in the world, combining the formerly disparate elements of water slides, wave pools, and splash pads. (It also spawned its own chain of sister locations all across the New World, ranging from Texas, North Carolina, and Nevada to Mexico and Brazil.)

When Universal purchased the location in September 1998, it was the most popular water park in Orlando (yes, even more so than Disney World’s trifecta of River Country, Typhoon Lagoon, and Blizzard Beach), which instantly qualified it as a successful competitor to Disney. Wet ‘n Wild’s performance since then, however, has proven to be middling, at best, as Disney has continued to invest in its water properties and Universal Orlando’s less-than-stellar attendance numbers throughout last decade caused the company to turn off the money spigot (just by way of comparison: in 2012, when Universal’s current building spree kicked off, Typhon Lagoon drew 2.1 million guests, Blizzard Beach received 1.9 million, and SeaWorld’s Aquatica Orlando nabbed 1.5 million, while Wet ‘n Wild only had 1.2 million visitors). 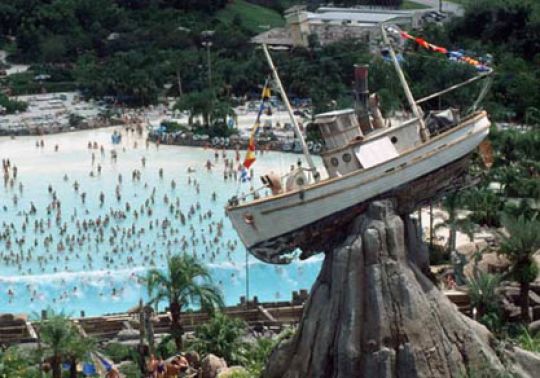 Now, with the arrival of a certain boy wizard having revitalized the level of spending and theming both across the entire resort, Universal is anxious to replace what has become a depressingly standard water park with a brand-new, immersively impressive one (a 200-foot erupting volcano? Yes, please), a decision which leaves a rather large question in its wake: what is to be done not only with Wet ‘n Wild, but also the 50-acre plot of land that it sits on?

This is where Screamscape comes in.

According to the site, the old park will be permanently closed once the new one opens in the summer of 2017, although, as has been speculated in the rumor mill before, a number of its newer, easy-to-transport rides – including Disco H2O, Brain Wash, and Aqua Drag Racer – just may be shipped up the road to Volcano Bay. (Screamscape also seems to think that several other attractions could additionally make the move, depending upon their condition and their ability to possibly be rethemed.) 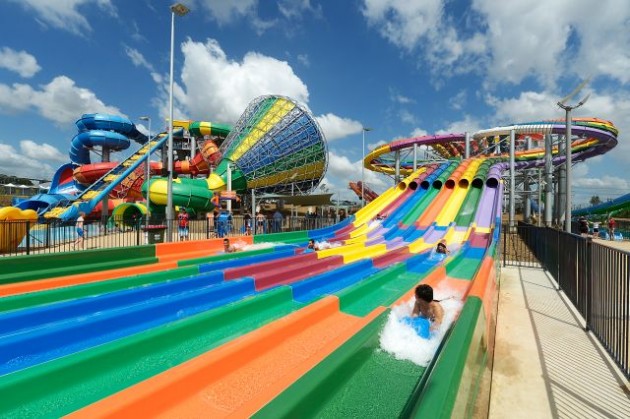 What happens to the property Wet ‘n Wild sits on is a far more interesting – and open-ended – question. In June 2013, Universal decided, after 15 years of leasing the land, to purchase it outright for the somewhat staggering sum of $30.9 million, a transaction which also included several extra acres surrounding the park, its parking lot, and office space. Spending that much money is not a decision that corporations make lightly, and, furthermore, they tend to only buy real estate when they intend to do something with it (as happened in the ‘90s near the Orange County Convention Center, when Universal was drawing up plans for 18-hole golf courses and time-share units).

Although 50 acres is only a drop in the bucket compared to Universal Orlando’s 840 – or, for that matter, Disney World’s 13,000 – that’s still more than enough land to erect several more hotels on, which would obviously help the company on its current quest to double, if not triple, the number of hotel rooms it currently has on hand. And Screamscape goes one step further and suggests that not only could a “massive resort” be installed here, but also a “mini-CityWalk,” as well, providing the launching pad for Universal Orlando’s much-heralded second expansion. 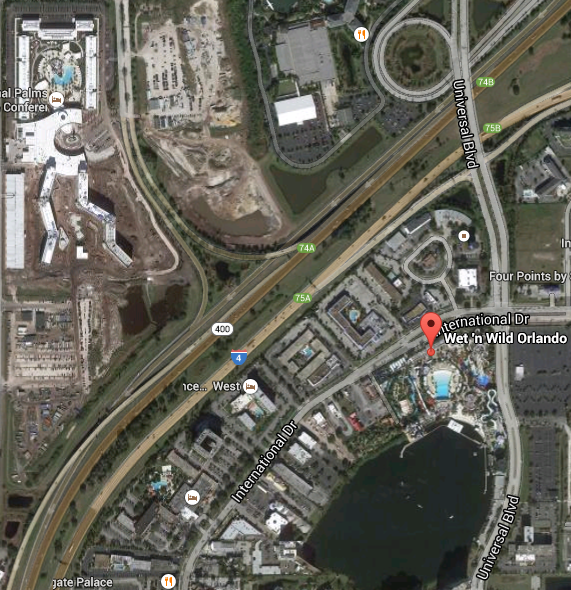 And, actually, this may very well be the point. In the site’s last piece of speculation, Screamscape notes that at least one of their sources has stated that Universal is actively looking for other parcels of land around the International Drive area, particularly on the other side of the road from Wet ‘n Wild. If true, the company may be going for a whole new theme park paradigm here, one that consists of little “islands” of resort property rather than brandishing one continuous expanse of land.

Twister’s final twist (for real, this time)
Will Twister… Ride It Out be torn down, or won’t it? Will it be shutting its doors right away or later in the year, once some of the busier tourist seasons have subsided? Will its replacement be opening this year or next?

Twister has become one of Universal Orlando’s most convoluted ongoing stories over the past year, which is ironic, given the rather simplistic nature of the attraction’s design and the rather limited scope of its experience. And while we don’t yet have definitive answers for most of these questions – although more and more details are pouring in, both from other sites and from our own private sources – at least one of them can now be (more or less) put to rest. Take a look at this photo: 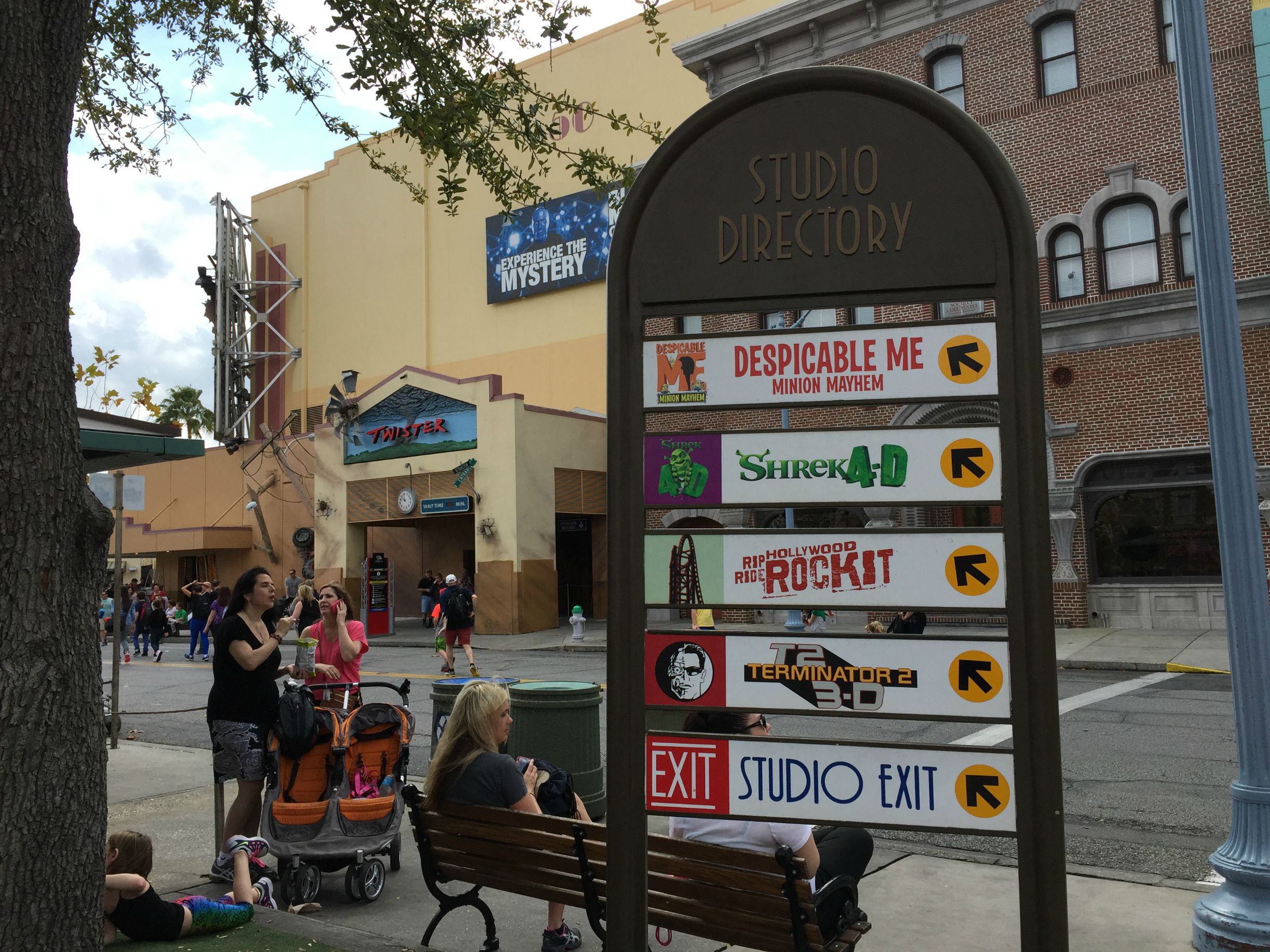 The only item missing from this “studio directory” sign is, of course, a reference (and corresponding arrow) to Twister, which has been there until just recently. If Universal is already taking down all signage dedicated to the attraction, then its demise is presumably just around the corner, perhaps as soon as within the next month.

Special thanks to Designing the Fear for tipping us off to the development and to Chuck, the good-natured community manager of our forums, for snapping the picture.

It’s everyone’s favorite time: annual price increases
When Disney unveiled its price hike for 2014, it surprised everyone for two reasons.

The first was simply its timing – instead of waiting for the traditional summer months (2013’s price increase occurred in June, for example), and instead of waiting for Universal to go first (which it had done in both ’13 and ’12), it hit the gates early, in February, which actually prompted concerns from some analysts (and guests!) that the company was preparing for a second rate bump later on in the year. That, fortunately, didn’t come to pass, preventing the company from upping its prices a record-breaking three times within a 12-month period.

But then there’s the price itself, which was the second reason that eyebrows were raised throughout the industry. The cost of a one-day, one-park ticket to Magic Kingdom, Disney World’s most popular destination, went up to $99.00, putting it on the very precipice of what has long been considered to be the do-not-cross mark, $100.00. 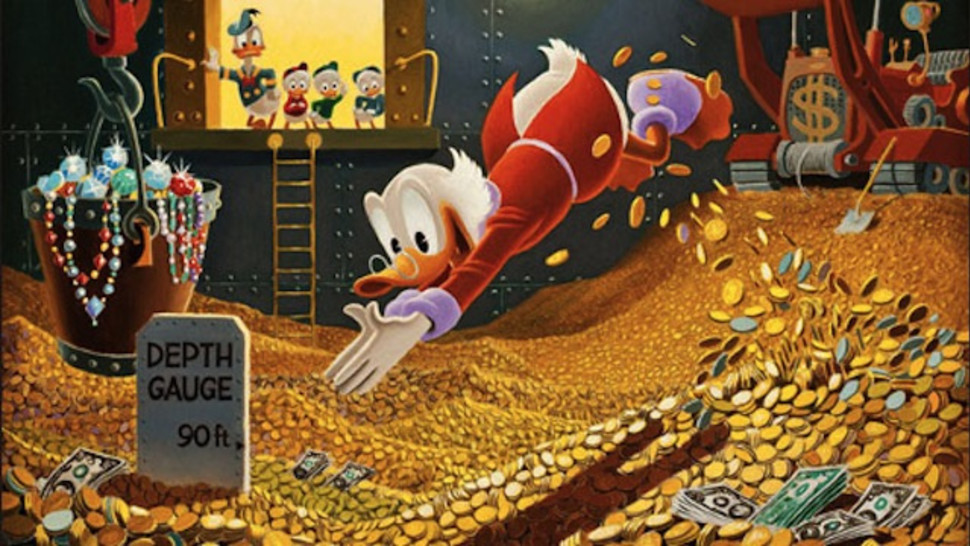 It looks like February has become the new price-increase date, as nearly every single outlet across the world wide web is reporting that Disney will once again take the charge and beat its competition to the dollar game this weekend. Expect Universal to follow suit sometime next week – if not sooner.

What will 2015’s dollar amounts look like? The truth is we can’t be certain, but we can make some educated guesses. Here’s a handy-dandy listing of the various prices for the big two Orlando resorts (specifically for a one-day, one-park adult ticket) across the past four years:

Seeing as how Universal has been rather consistent with its $4.00 increases, it’s likely that a one-day, single-park trip to either Universal Studios Florida or Islands of Adventure will end up running $100.00 for the remainder of the year, which might be considered something of a “sweet spot,” given that it sits exactly on the triple-digit threshold. Disney, meanwhile, is probably eying $104.00 for Magic Kingdom and $99.00 for all its other parks, knowing that the general public will pay just about anything to enter the world’s busiest theme park while keeping its other three destinations just within double-digit territory. 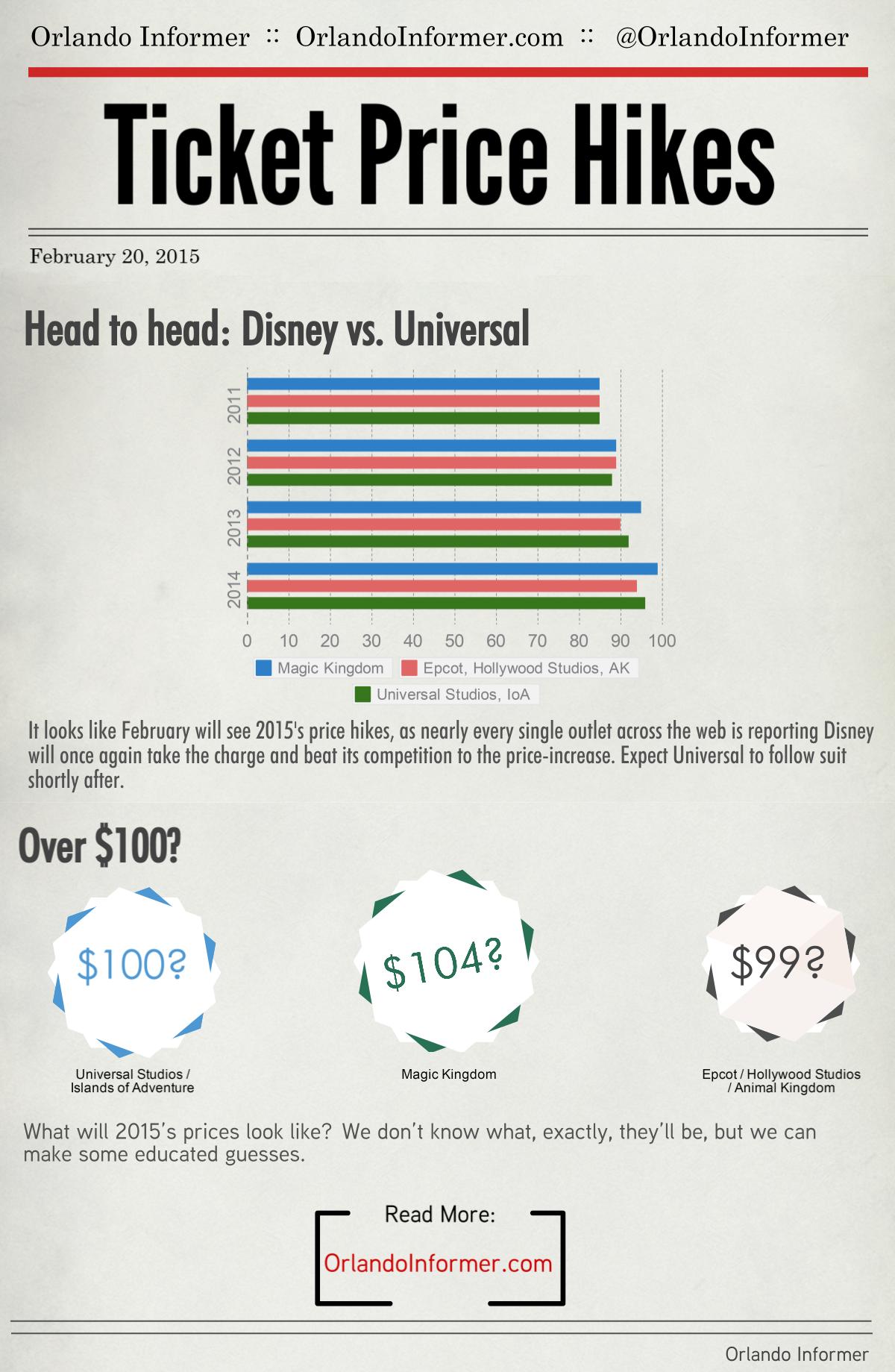 Is it a mistake for Universal to expand in chunks throughout the I-Drive area? Will Disney World and Universal Orlando be too expensive to visit this year and on into the future? The comments await below.

Want to price out your vacation and find the best deals before the price hikes? We’ll do it for free. (seriously) – learn more.