Universal’s next must-do experience is…

You are reading an article tagged as a rumor.

On August 16, NBA City – one of Universal CityWalk’s very first tenants – closed its doors. While we know that it’s preparing to make its move over to the competition down the street, becoming the NBA Experience at Walt Disney World, what its replacement is has remained a mystery ever since the development was first announced, nearly three months ago (and, really, for the year before that, when rumors were heavily circulating that NBA City was on the chopping block).

Information is still sparse on this front, but we here at OI HQ have been hearing some things, particularly from our friend Unknown, who likes to haunt our community forums and drop cryptic prophecies from time to time. While the picture is still very much coming together, it already appears to be a worthy addition to CityWalk and yet another must-do experience that Universal has been so good at unleashing on its poor, unsuspecting guests over the past several years, ever since a certain Boy Wizard landed in Islands of Adventure.

Want a taste of the future? Read on…

Although CityWalk has long been the most popular spot for Orlando nightlife, it hasn’t been until just recently that Universal has been giving the area the amount of love and care that it not only deserves, but that is also usually only spent on the theme parks and hotels. Finally adding some more entertainment to the dining/shopping/entertainment complex, Universal unfurled Hollywood Drive-In Golf in 2012, followed by the advent of “CityWalk 2.0” in 2014 – including such venues as Vivo Italian Kitchen, Antojitos Authentic Mexican Food, and, but of course, The Cowfish Sushi Burger Bar – which updated the area’s aging aesthetic and established a new standard for quality cuisine at the resort.

And work on the area has continued to trickle ahead, albeit in a piecemeal fashion; this fall, we’ll be receiving NBC Sports Grill & Brew, an updated sports bar that throws in such flourishes as an incredibly expansive menu (over 100 beers!) and open fire grills, which allow guests to watch their food be cooked in front of them. Oh – there’s also some 90 flat-screen televisions scattered all throughout the interior and, even, plastered all over the exterior, giving CityWalk something of a post-(theme park) modernist touch.

NBA City’s replacement looks to very much continue this trend, further giving CityWalk a glamorous touch while also continuing to fill in the resort’s culinary holes (with the recent advent of The Wizarding World of Harry Potter – Diagon Alley and the always-booked Cabana Bay Beach Resort, more people than ever before have flocked to Universal Orlando, mandating food options that are both plentiful and robust).

What we don’t know

Before we can dive into what is known, we first have to cover what isn’t – and it, unfortunately, is a rather big swath at the present moment.

The name is the biggest blank as of right now, although it seems that Universal is currently veering towards an original property (like Red Oven Pizza Bakery or Bread Box Handcrafted Sandwiches) rather than a pre-existent brand (like Cold Stone Creamery or Menchie’s Frozen Yogurt). We also don’t know what its overall ambiance or design ethos will be – though we have a few good guesses in this regard – or what the breadth and depth of its menu will entail.

Oh, just to add insult to injury, we also have no clue when its opening window will be, though if NASCAR Sports Grille’s closure and NBC Sports Grill & Brew’s opening are any kind of indication, this time next year is the most likely candidate.

What we do know

Now on to the fun stuff.

First and foremost, it looks as if Universal is electing to keep NBA City’s layout almost exactly the same, electing instead to redo the interior instead of demolishing and rebuilding the exterior. This actually makes a lot of sense, as not only does it mean a far shortened (and significantly cheaper) construction period, but the previous layout is spacious and inviting enough to fit practically any theme or ambiance. 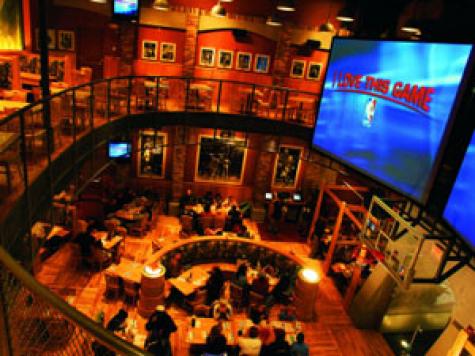 Yes, this is the best pic of NBA City’s interior we could find.

The operating word for the new venue is “upscale”; Universal is angling to make this something of a posh dining experience, something more along the lines of, say, Emeril’s Orlando than Bubba Gump Shrimp Co. Expect a color scheme of white theming with black, which should do much to up the elegance quotient. And the finishing touch in this regard is the one major alteration being done to the interior: the inclusion of a brand-new grand staircase. Although it will more than likely lead to nowhere, it will still establish a certain mood and grandeur.

What will the culinary focus be? Why, dessert, with chocolate (and, possibly, wine) being inserted everywhere one looks. The term “chocolate pots” has been used extensively in our conversations with our sources, which leads us to believe that the new restaurant will be at least something of a fondue joint.

Just to round out the picture, it looks like NBA City’s gift shop will be getting an overhaul to become a chocolate lover’s paradise – so much so, in fact, that plans might even call for its (slight) expansion.

We expect the latest culinary sensation at Universal Orlando Resort to be announced sometime in the very near future, probably within the next month (though the company has a rather spotty, last-minute reputation for such things, as yesterday’s Fast and Furious: Supercharged announcement has more than shown).

Do you think Universal is right in landing a fancy dessert location for CityWalk, or is it missing another giant hole it should be filling instead? Sound off in the comments below.

In the meantime, read even more about what the future (possibly) has in store for Universal with both Konami and The Wizarding World of Harry Potter – Ministry of Magic.

Fast & Furious racing to Universal in 2017