The first time we visited Universal Studios Florida was in 1992. Our daughter was 10 and so little for her age but she was tall enough to Ride the Movies, catch-phrase of Universal at the time. I remember how she slipped down in the seat while on Back to the Future (which now, of course has become The Simpsons Ride, not to mention the entire town of Springfield USA), and we thought she was going to bounce completely out of the car; it scared me half to death and later I couldn’t even remember what happened on the screen! But she LOVED it and giggled so hard it was comical. She loves anything that moves, even elevators, so Earthquake: The Big One (now known as Disaster!) amused us all. We took the backlot Studio Tour and got a kick out of seeing sets from TV shows and working studios.

We didn’t take a lot of pictures because film and prints cost a bunch back in the day, but I do have several from that first visit. I decided it would be fun to go back to the same spots and take new digital photos to see how Universal Studios Florida has changed in 23 years, especially since Universal Studios Orlando is now celebrating its 25th Anniversary on June 7, 2015. We have been Annual Passholders for 17 of those years, so we also have hundreds of digital photos now!

I truly dislike the phrases “I’ve been there” or “I’ve seen it” when it comes to going to theme parks. Yet, when we ask visiting friends to go with us just one day, these are the phrases I most often hear. There is NO WAY anyone who visited Universal Studios a few years ago can say that they’ve experienced everything! I honestly wish I were able to treat all of these people to a second visit so they could see the changes over the years and how the park has continued to expand. Universal Studios is more fun now that it was in 1992, or even 1999! So, I’ve put together those few photos from 1992 with updated images.

Central Park & World Expo
We stopped in Central Park to give our daughter her lunch in 1992. At the time we had to carry her prepared meals with us (she can’t chew), so we enjoyed this grassy knoll as a picnic spot. 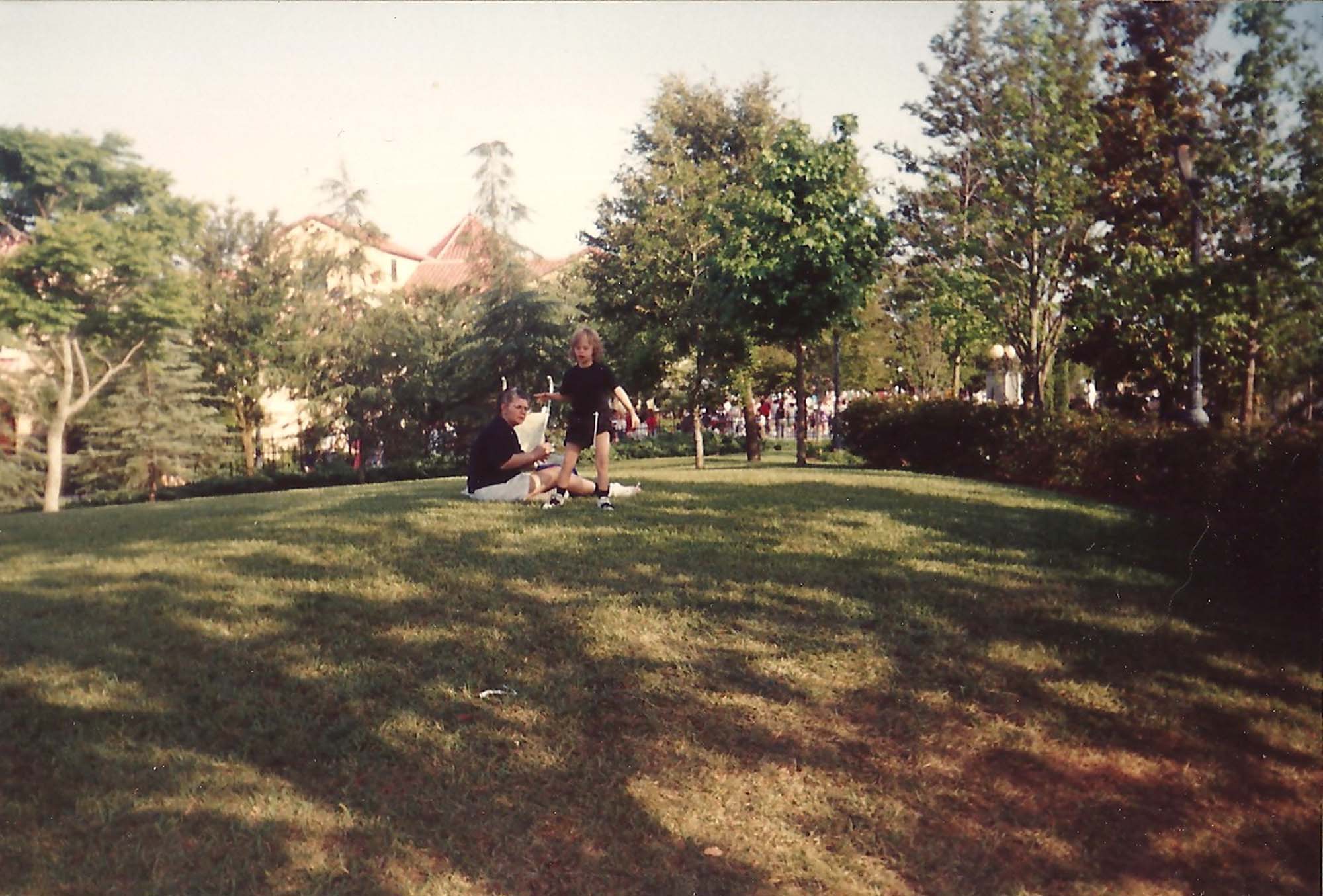 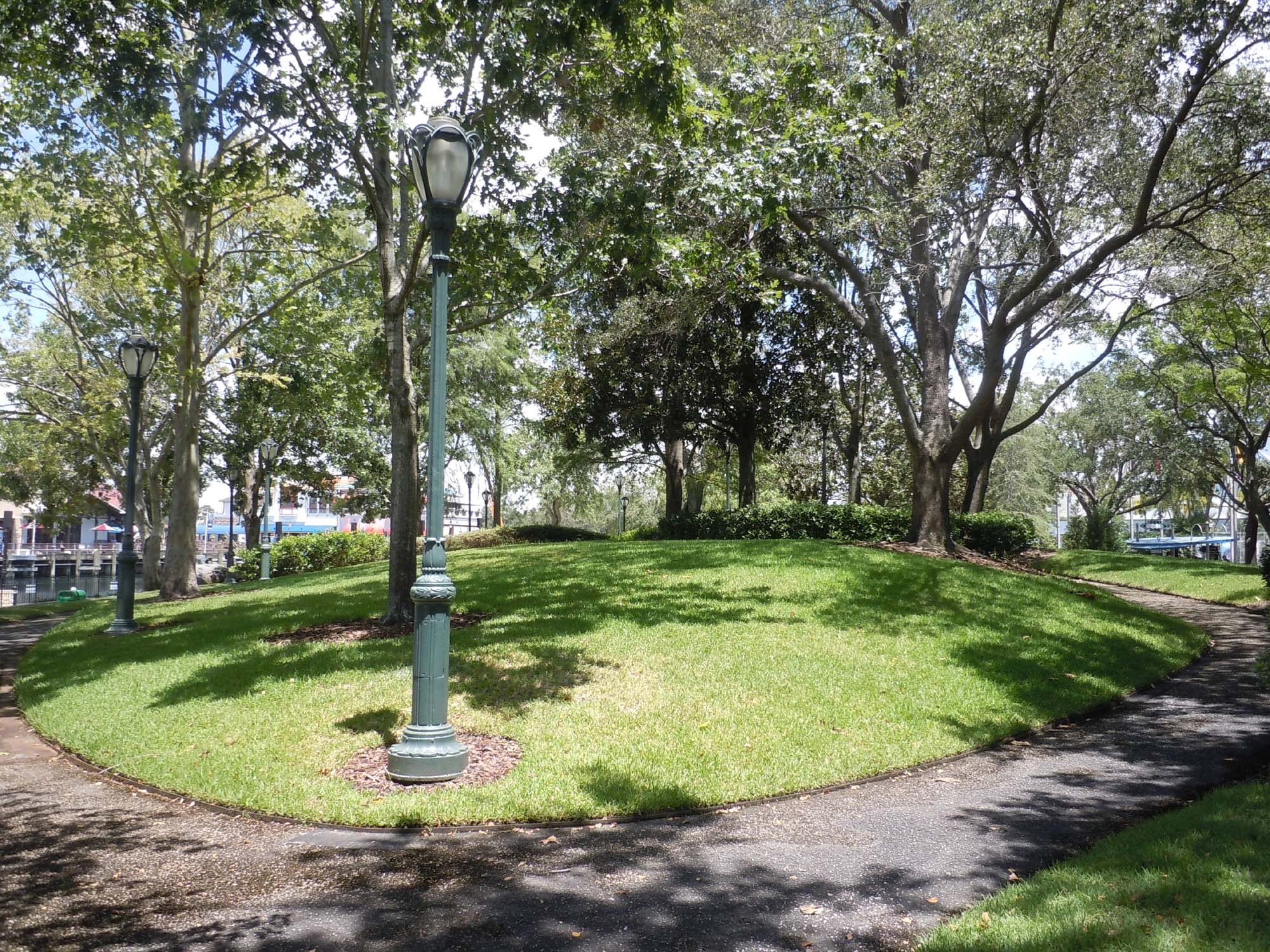 There have been changes just since this photo was taken in 2012 – bushes have been added behind the lamppost and there is far less grass available for picnicking. You can also see that walls have been put up around The Gardens of Allah Villas, which is under construction for a future attraction. 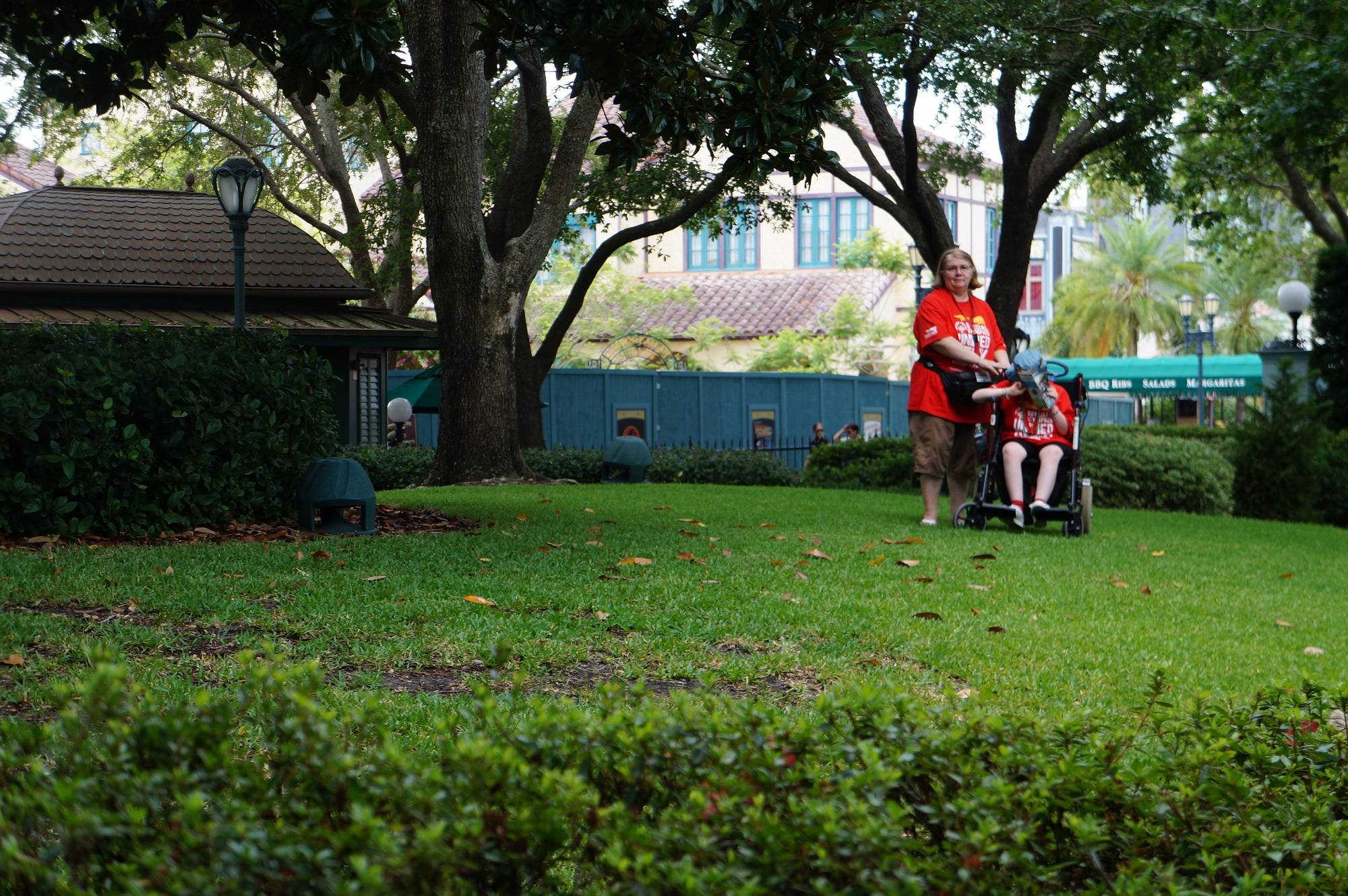 We could see completely across the lagoon as the trees were all small and views were not obstructed. It is one of the prettiest spots in Universal Studios and I don’t understand why we rarely see visitors make use of it. We also took pictures from this area toward Lombard’s Seafood Grill in San Francisco. 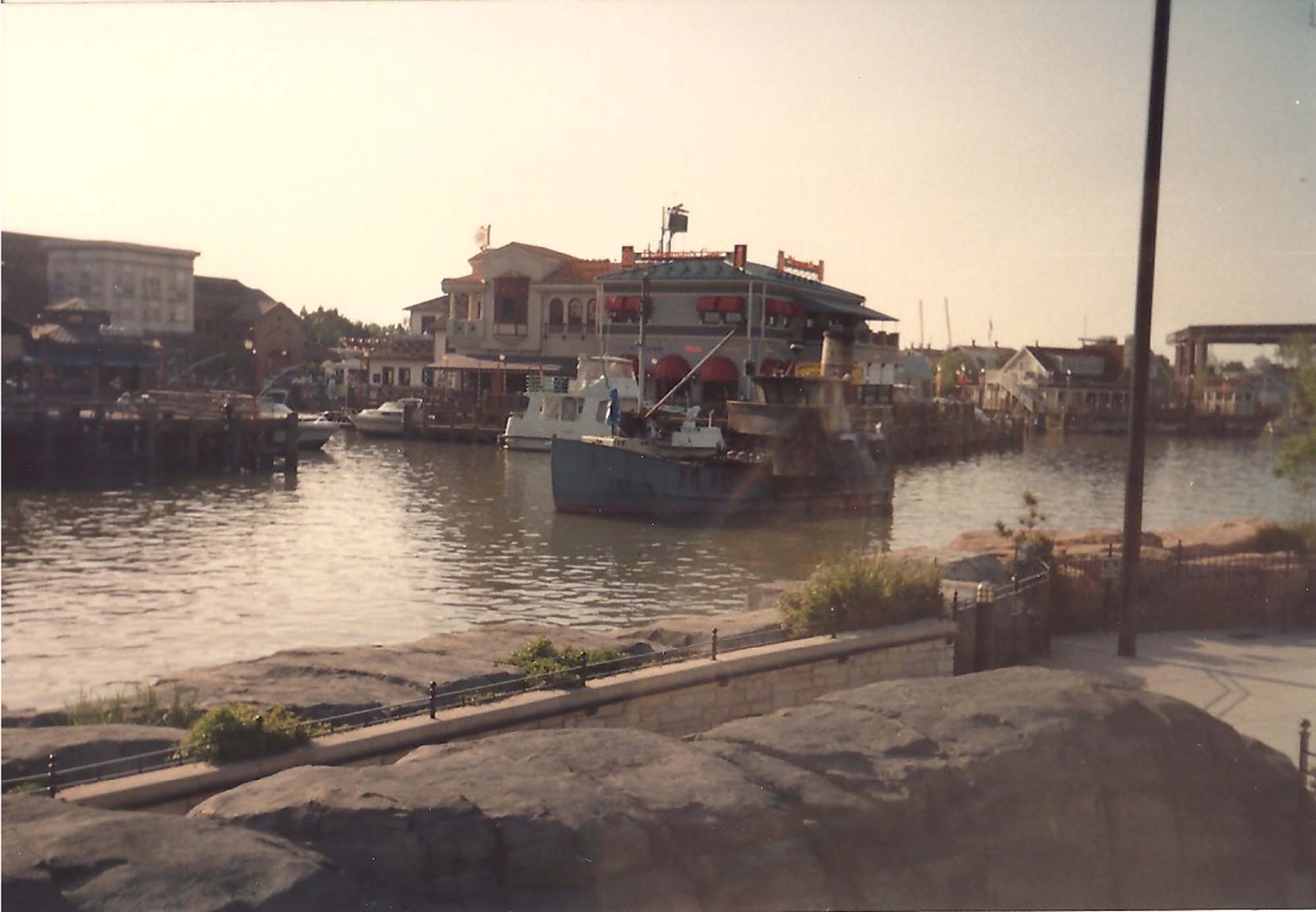 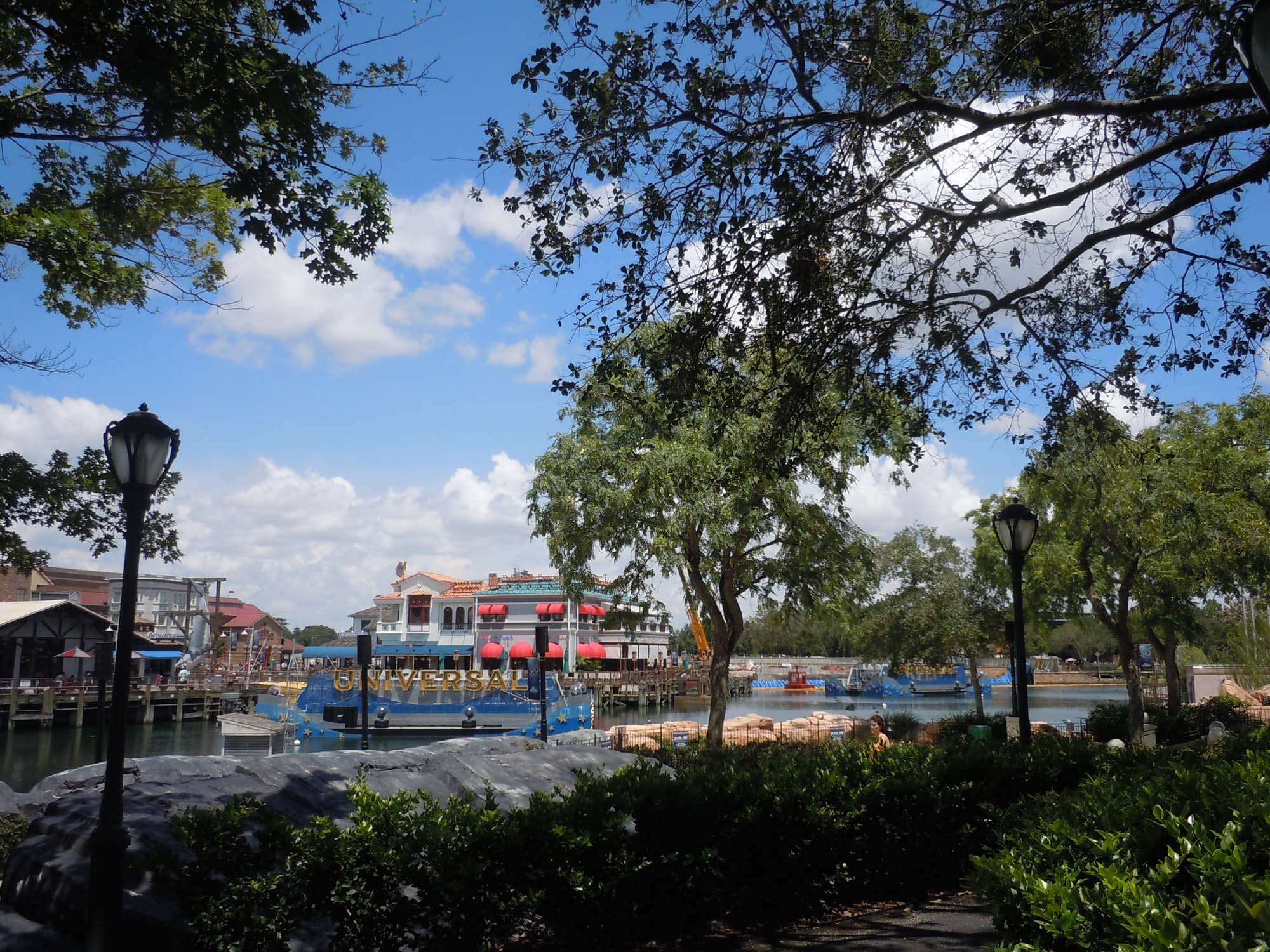 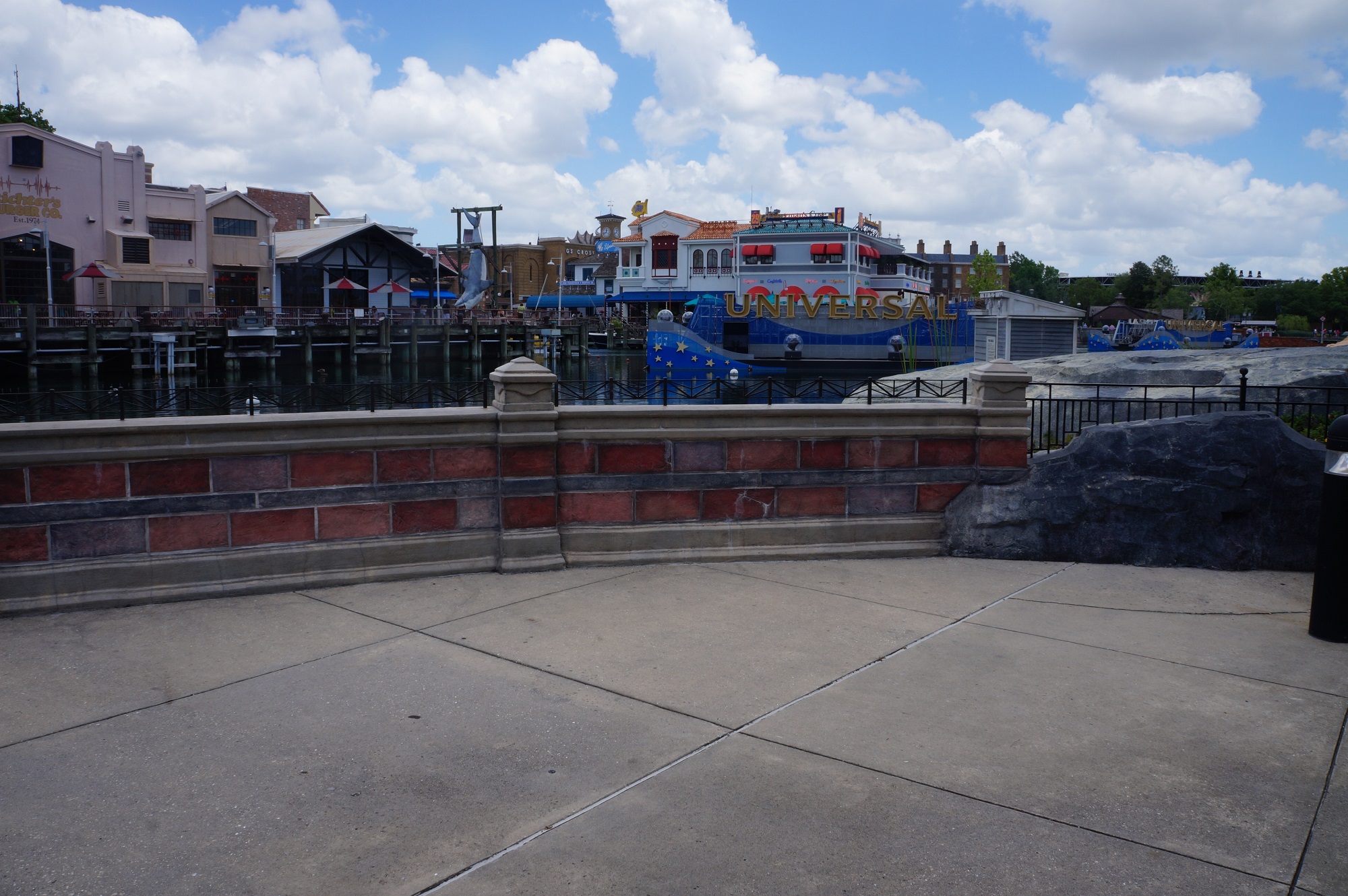 And now that Jaws and Amity are part of the past (except for Bruce the Shark’s new home), the buildings along London’s waterfront, entrance to The Wizarding World of Harry Potter: Diagon Alley can be seen behind the seafood restaurant.

Looking toward New York, while waiting for the boat show on the Lagoon, we clicked this photo: 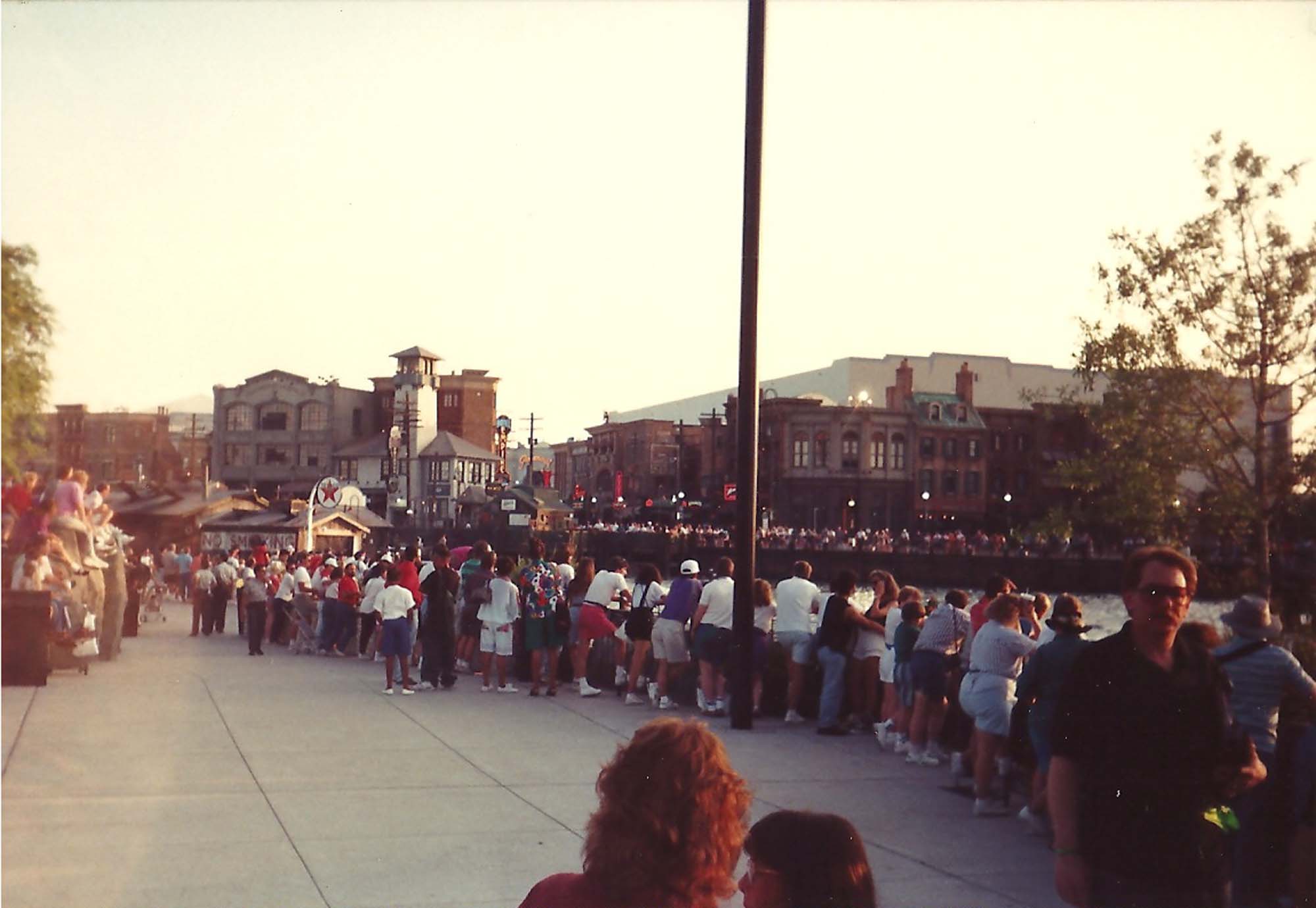 But now, in 2015, Hollywood Rip, Ride, Rockit Coaster can be seen spiraling through the skyline and Transformers, The Ride 3-D can be seen where a Soundstage 44 once stood. 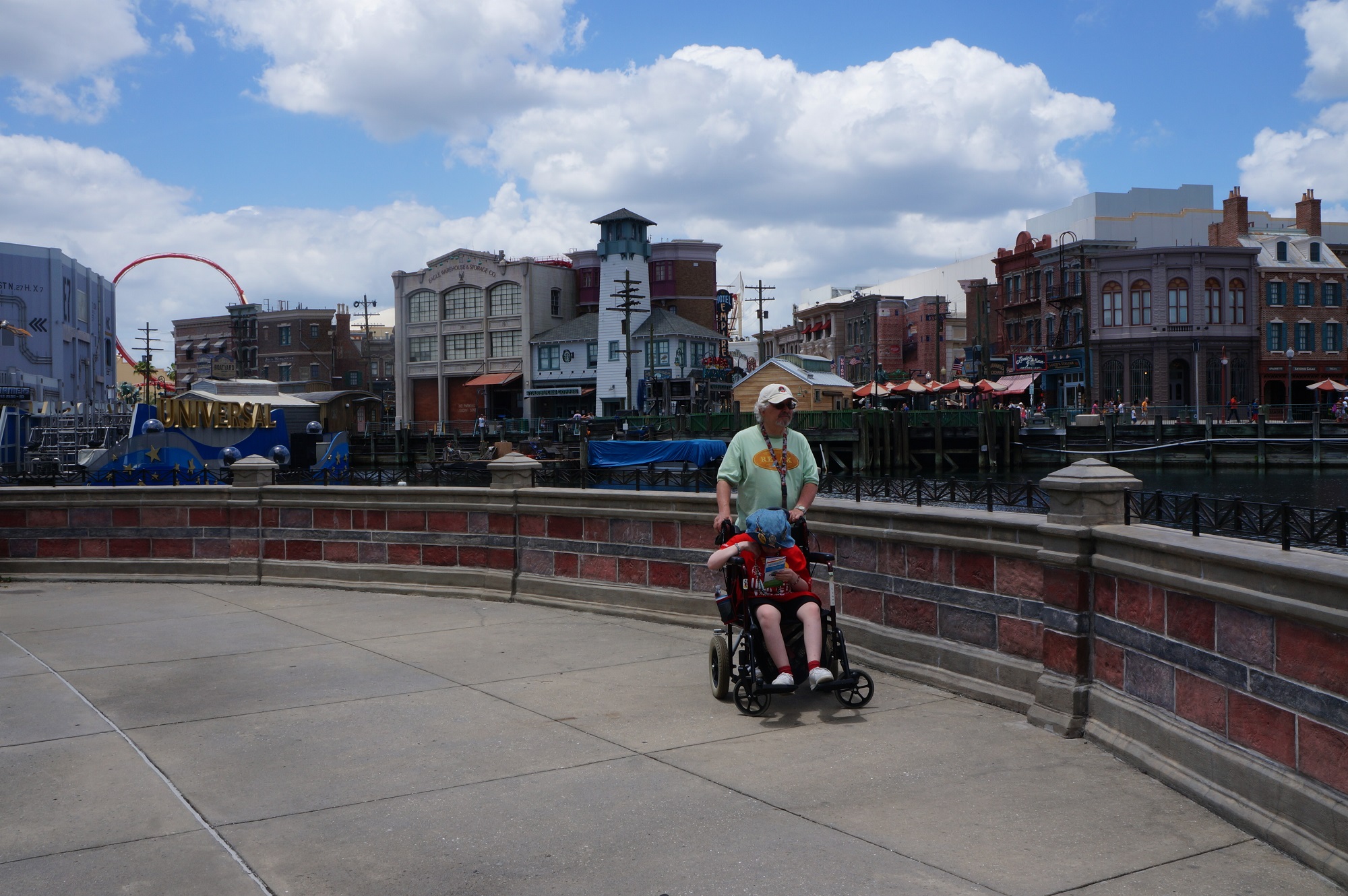 And the speed boats have been replaced by Universal’s Cinematic Spectacular. 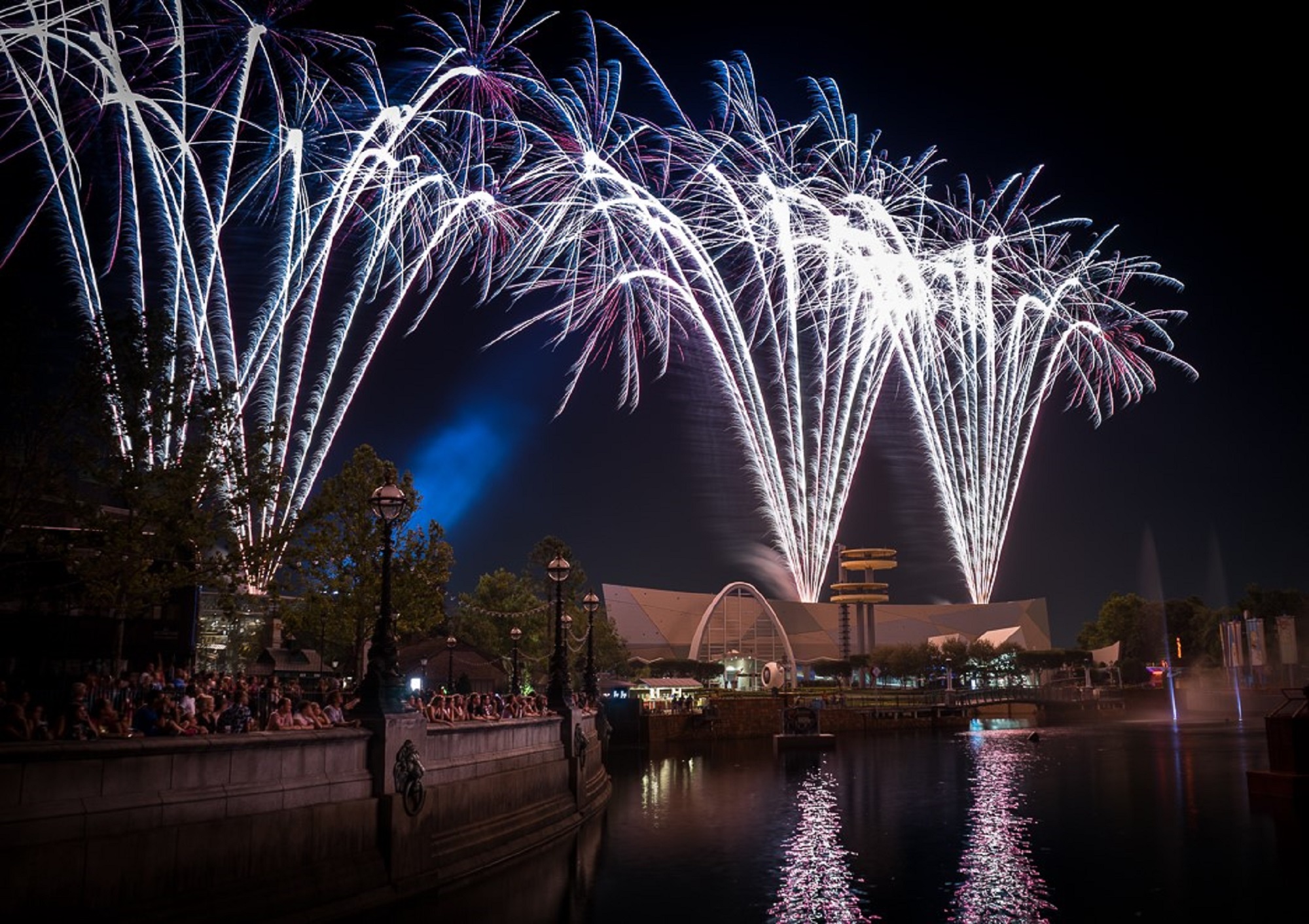 Opening as the Animal Actors stage in 1990, this attraction became Animal Planet Live in 2001 but was re-named Animal Actors on Location in 2006. Later in 1998, Woody Woodpecker’s KidZone was opened in the area behind the Animal Actors show. This is how the stage looked in 1992 and in 2012: 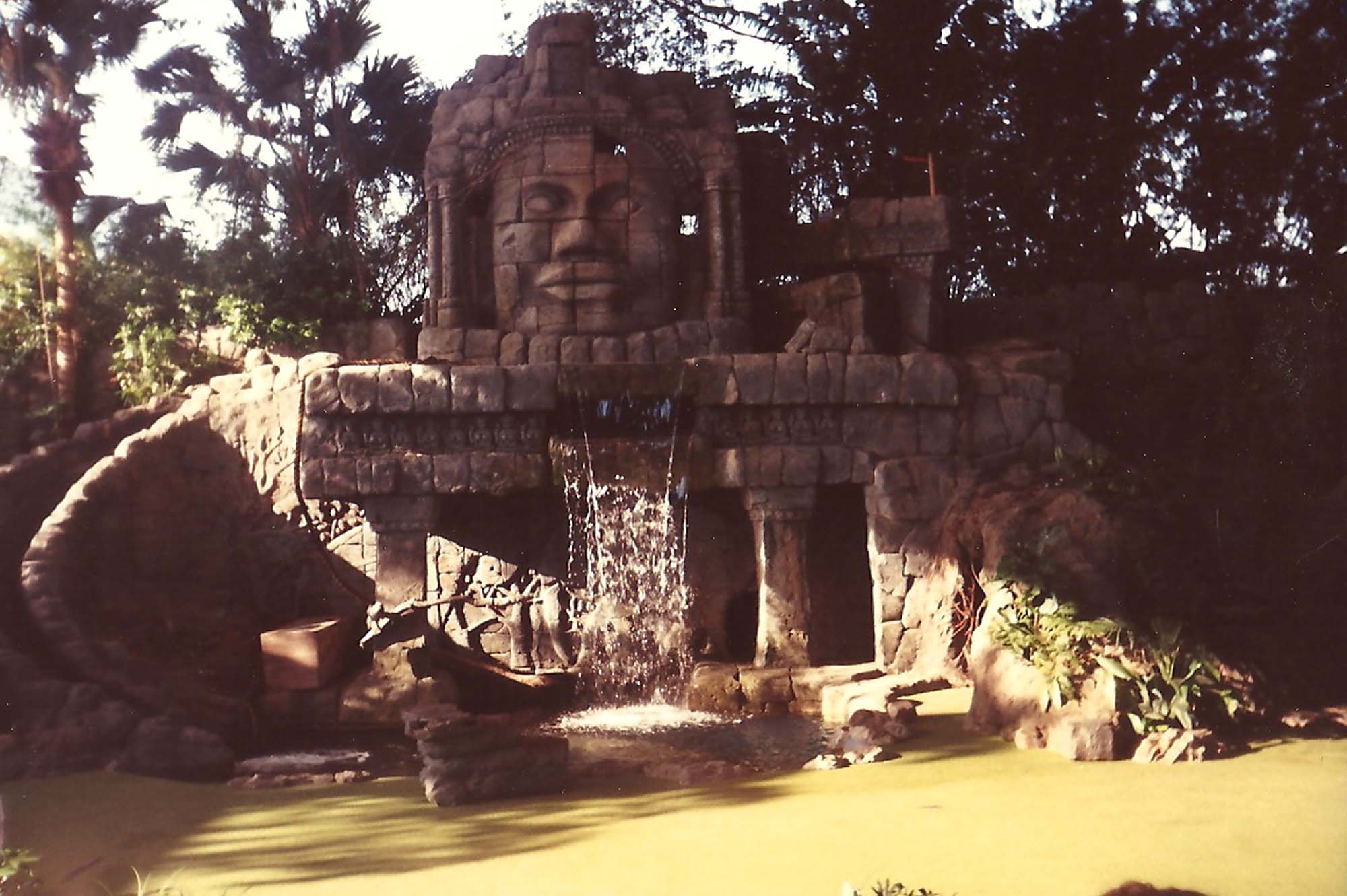 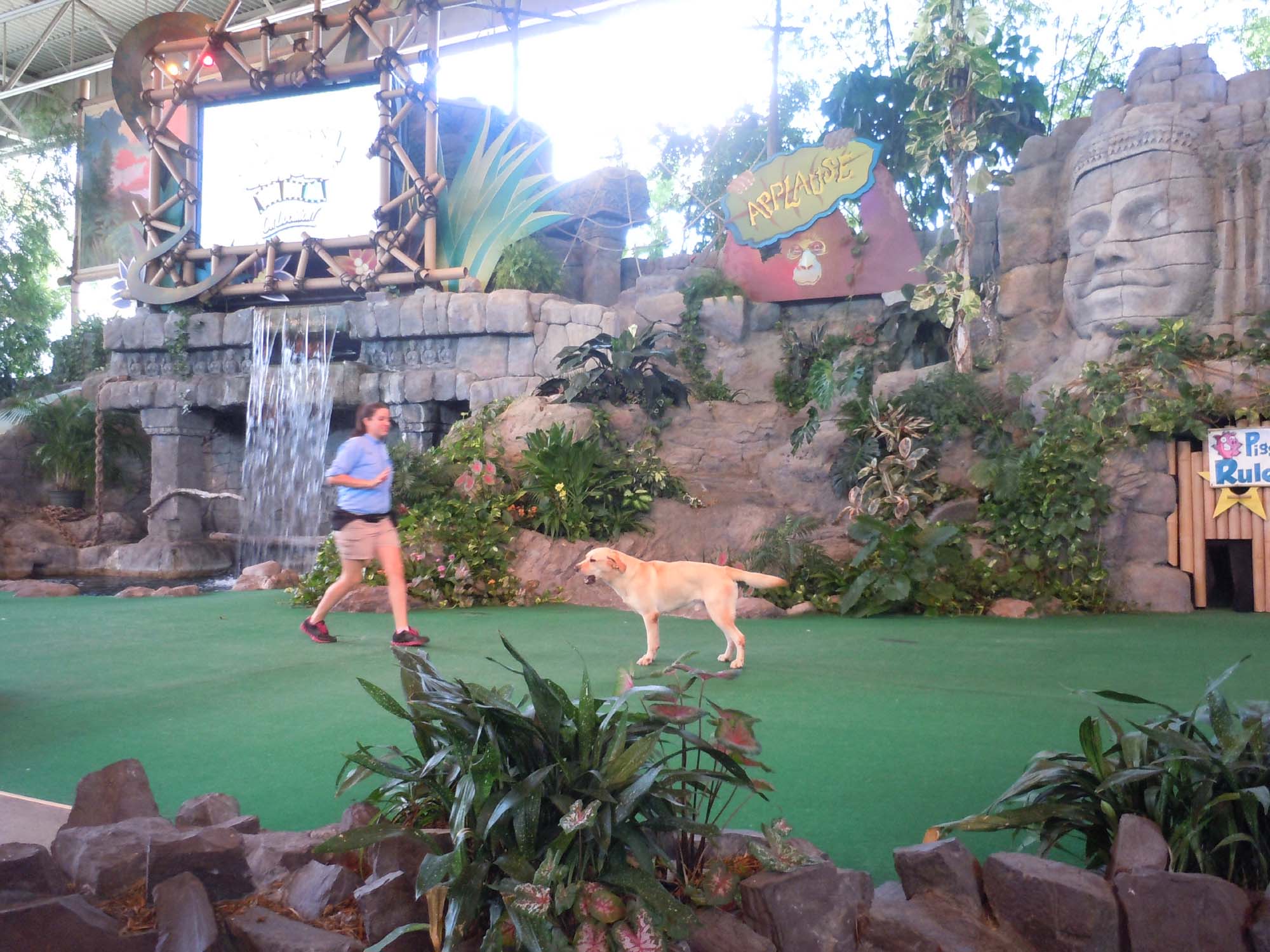 In 2012, I would have loved to have taken the picture from the same spot, but the area was for electric scooter riders. When I tried to get a recent photo, the attraction was closed. The show’s stage has not changed since 2012, however.

On The Studio Tour tram we went by Universal’s first “on-site” motel, The Bates Motel, which was used in Psycho IV: The Beginning. It was also used for the Psycho Path Maze during Halloween Horror Nights until it was demolished in 1995 to make way for A Day in the Life with Barney. The Bates Mansion was demolished to make way for Curious George Goes to Town, which opened in 1998. 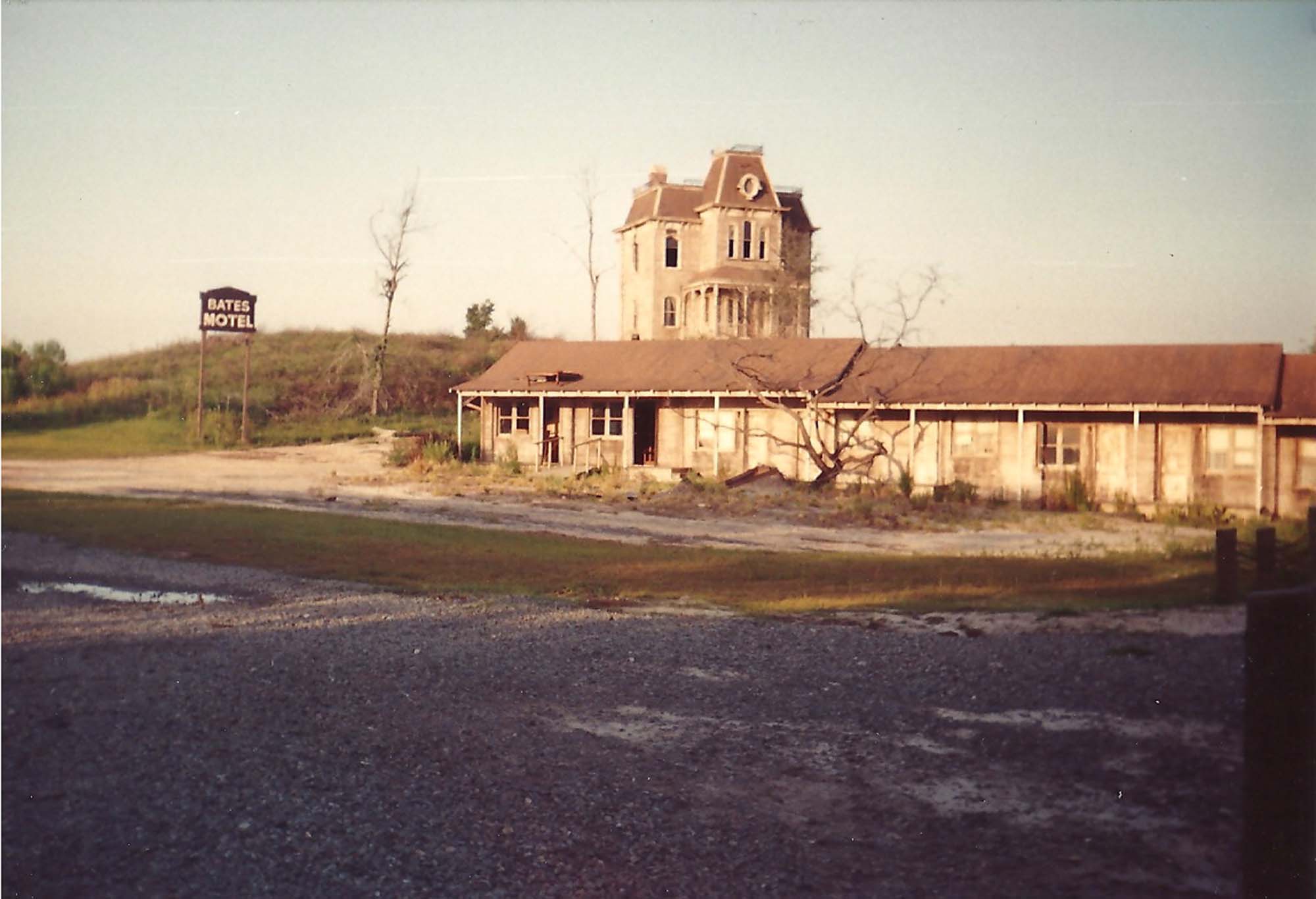 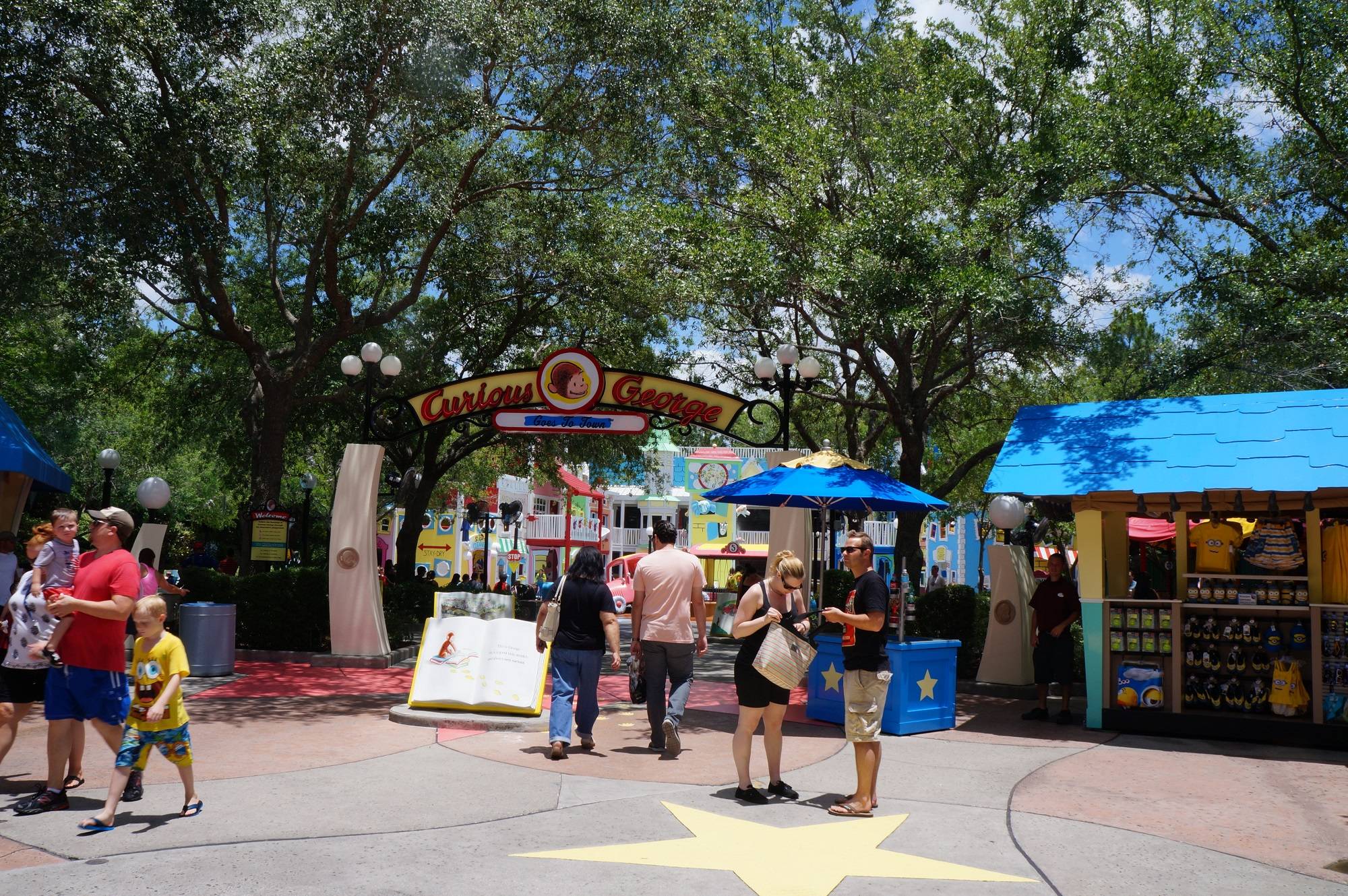 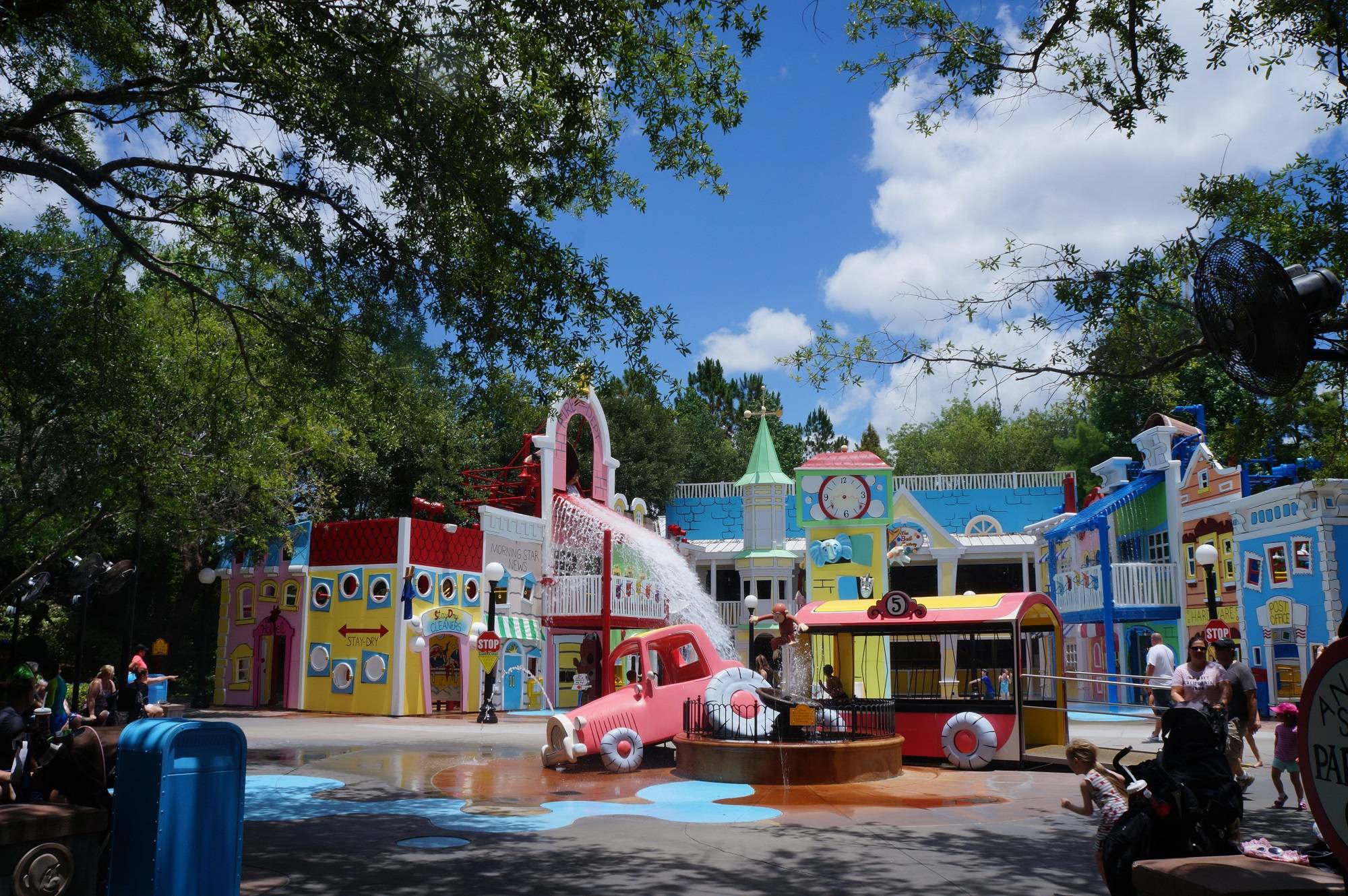 The Studio Tour was discontinued in the fall of 1995, but on the tram we also saw the working set for Swamp Thing: The Series, a TV show that ran for three seasons beginning in 1990. MEN IN BLACK Alien Attack now occupies the land. 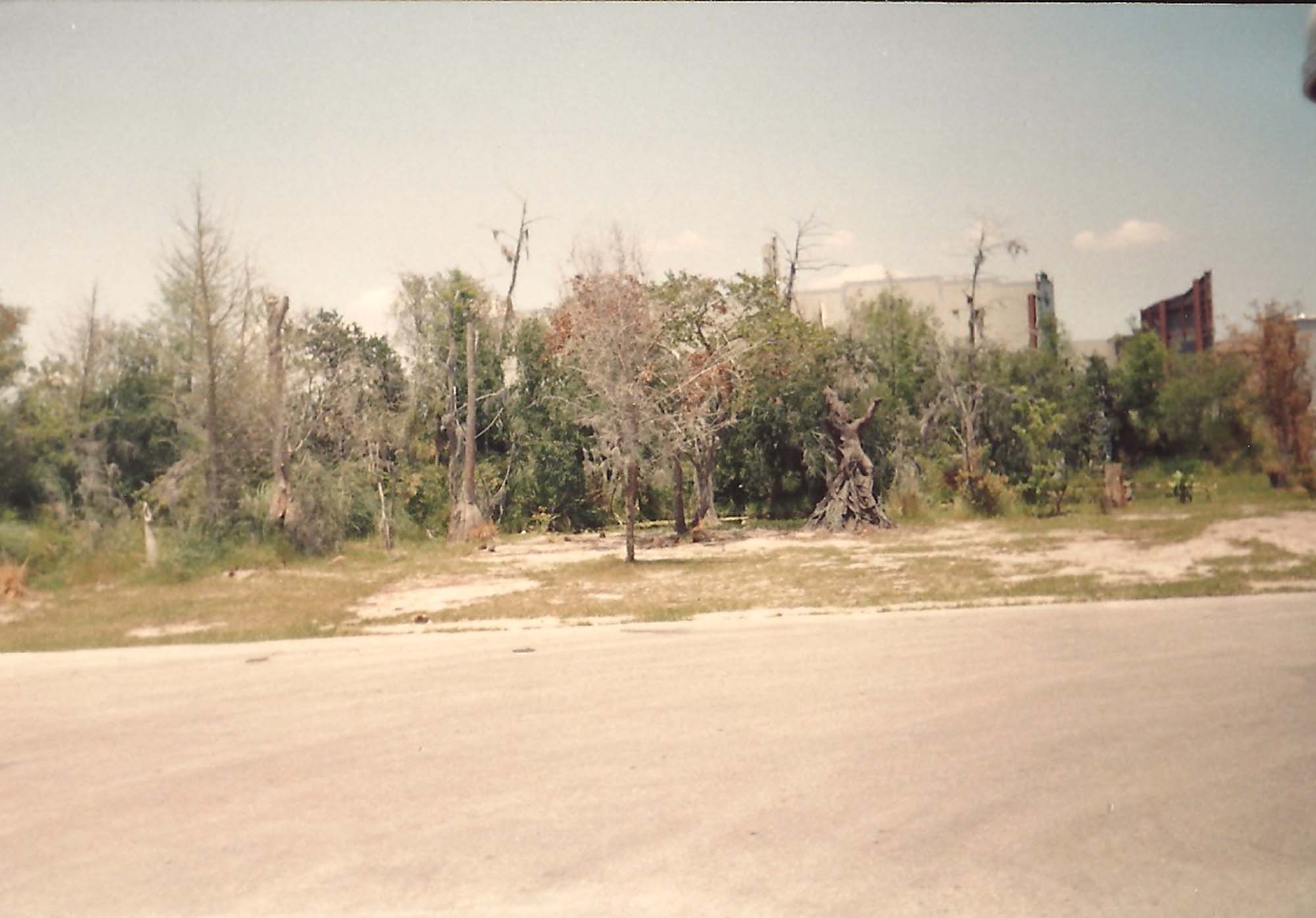 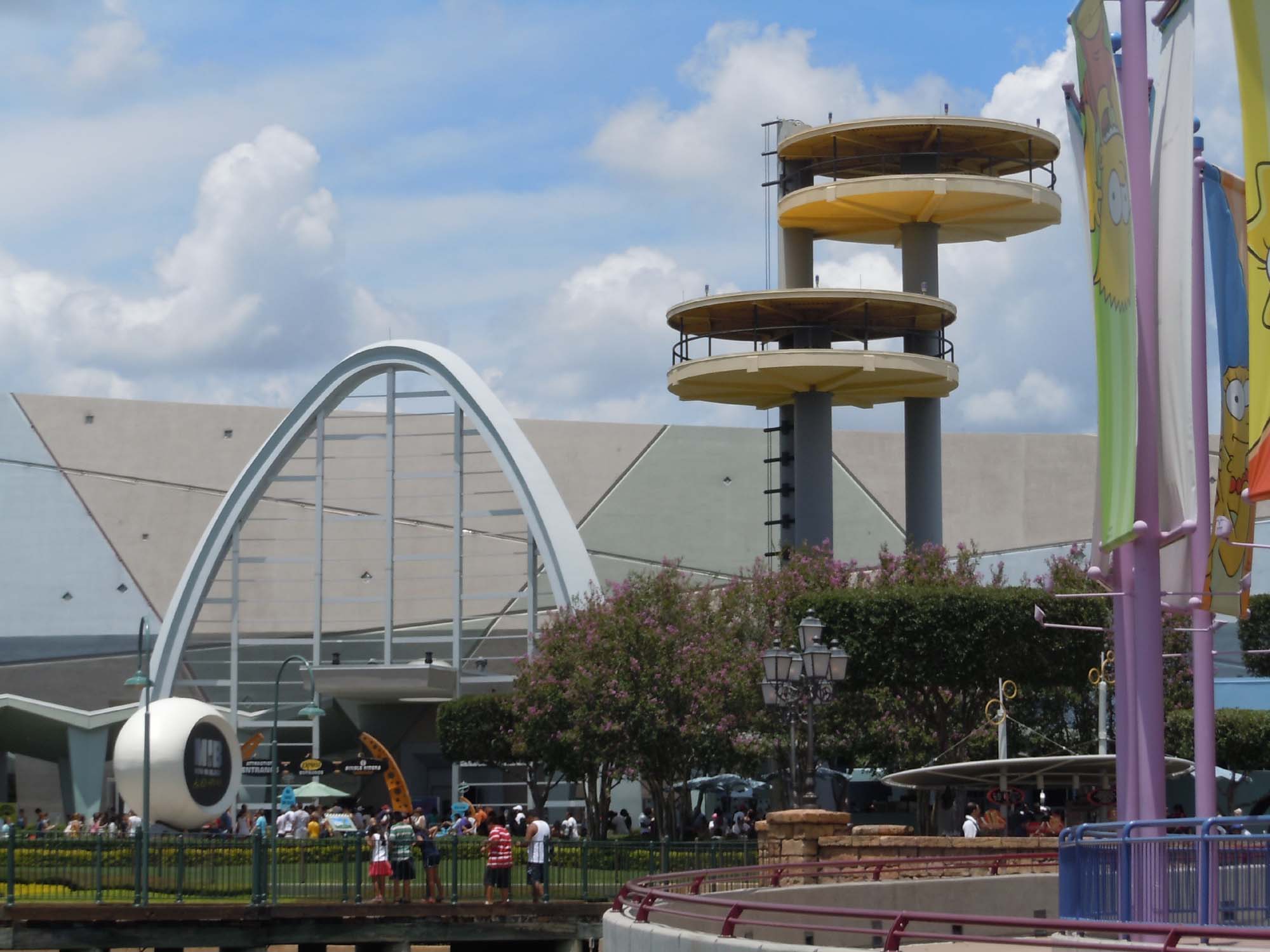 New York
The large painted sets of the New York Public Library and skyline and the faux Guggenheim Museum are impressive, especially when viewed from a distance, but the subway tunnel is showing its age. It had a bronze finish when we first saw it in 1992; now has a beautiful green patina. The most obvious addition is the Hollywood Rip Ride Rockit track jutting out of the Guggenheim facade. 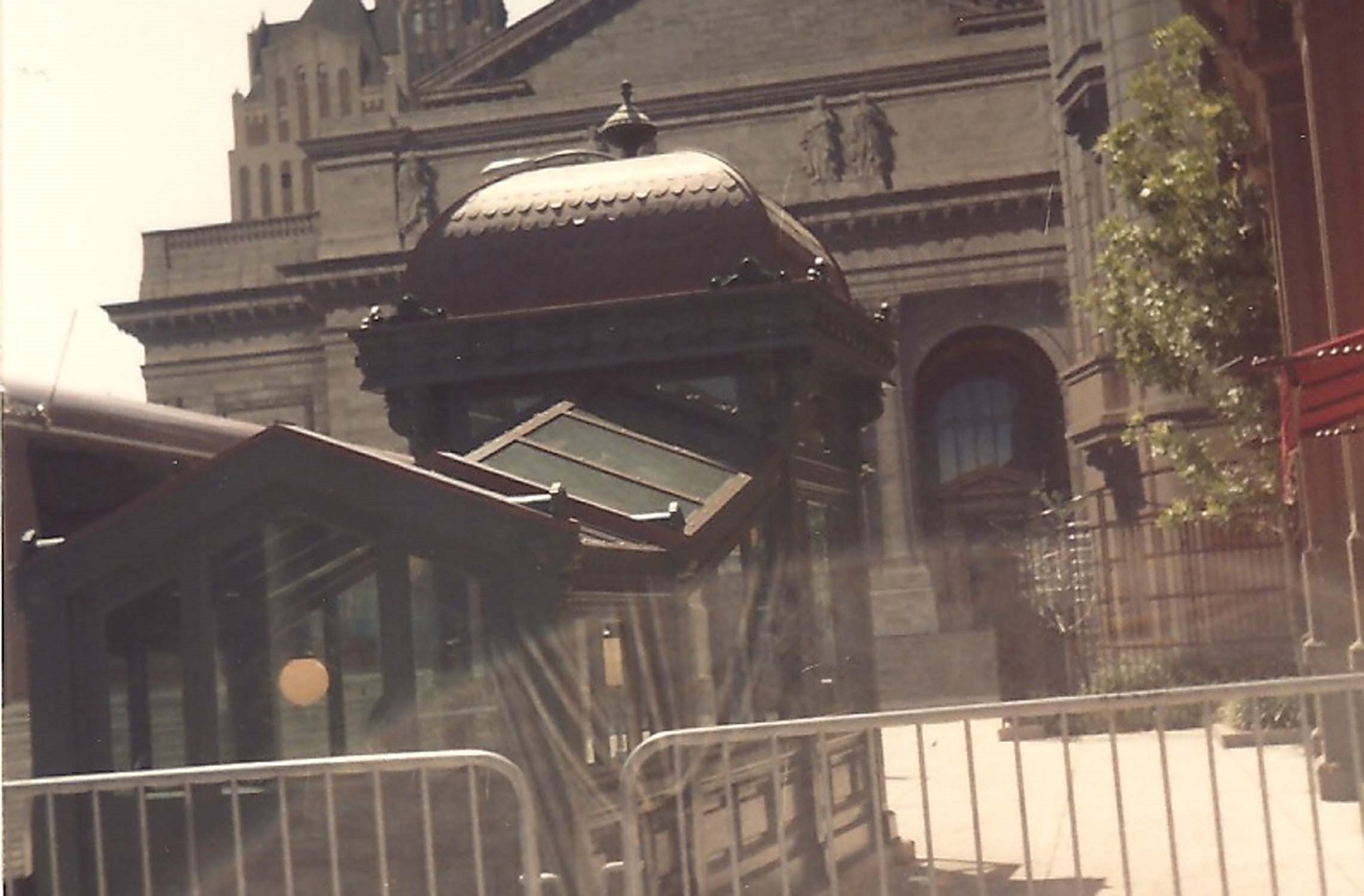 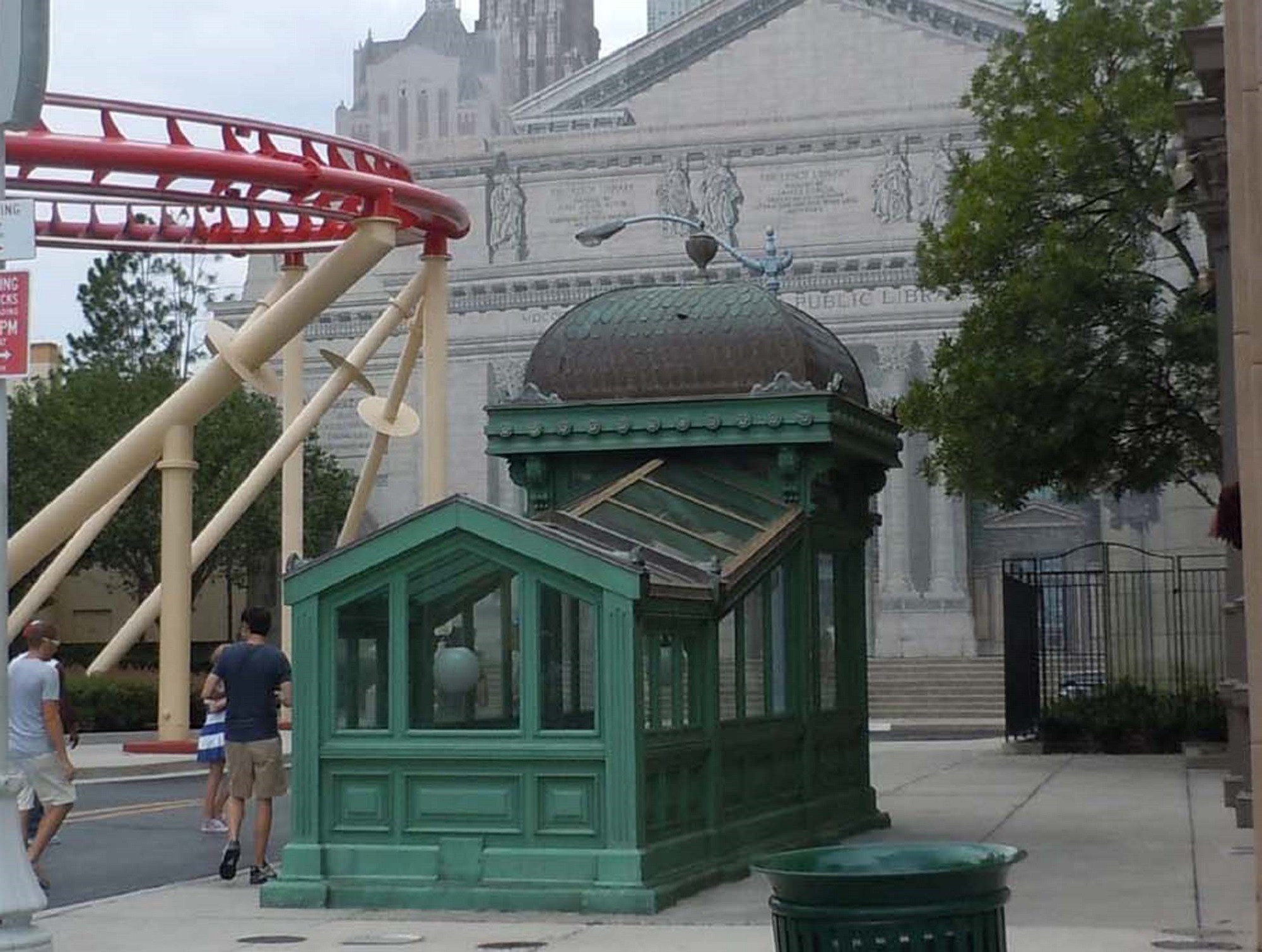 The longer view of the street is even more spectacular. In the 2012 photo, you see the entrance for Twister…Ride it Out on the left and another view of the Rockit track. Until the debut of the Universal Music Plaza, bands performed on the steps of the library. 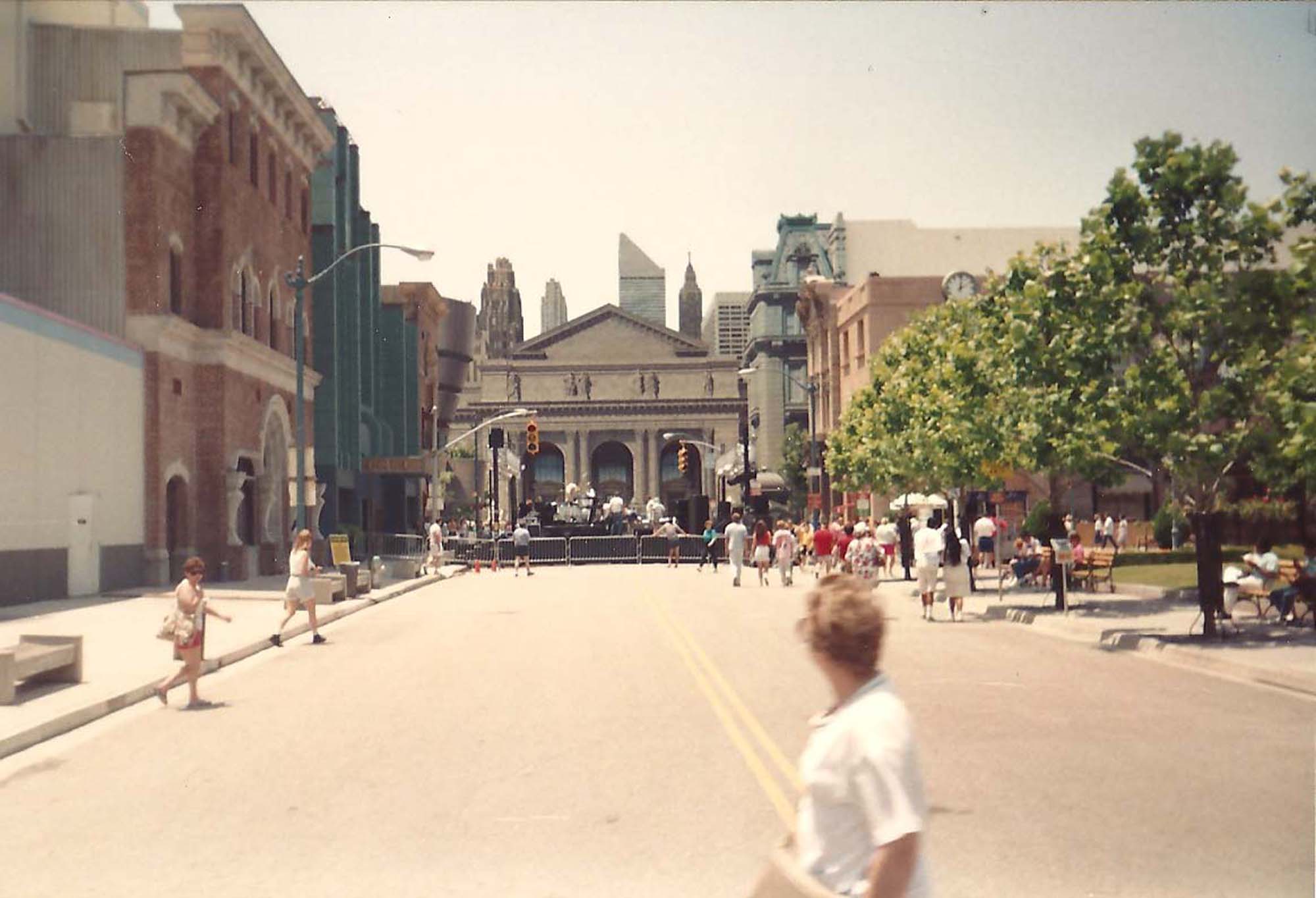 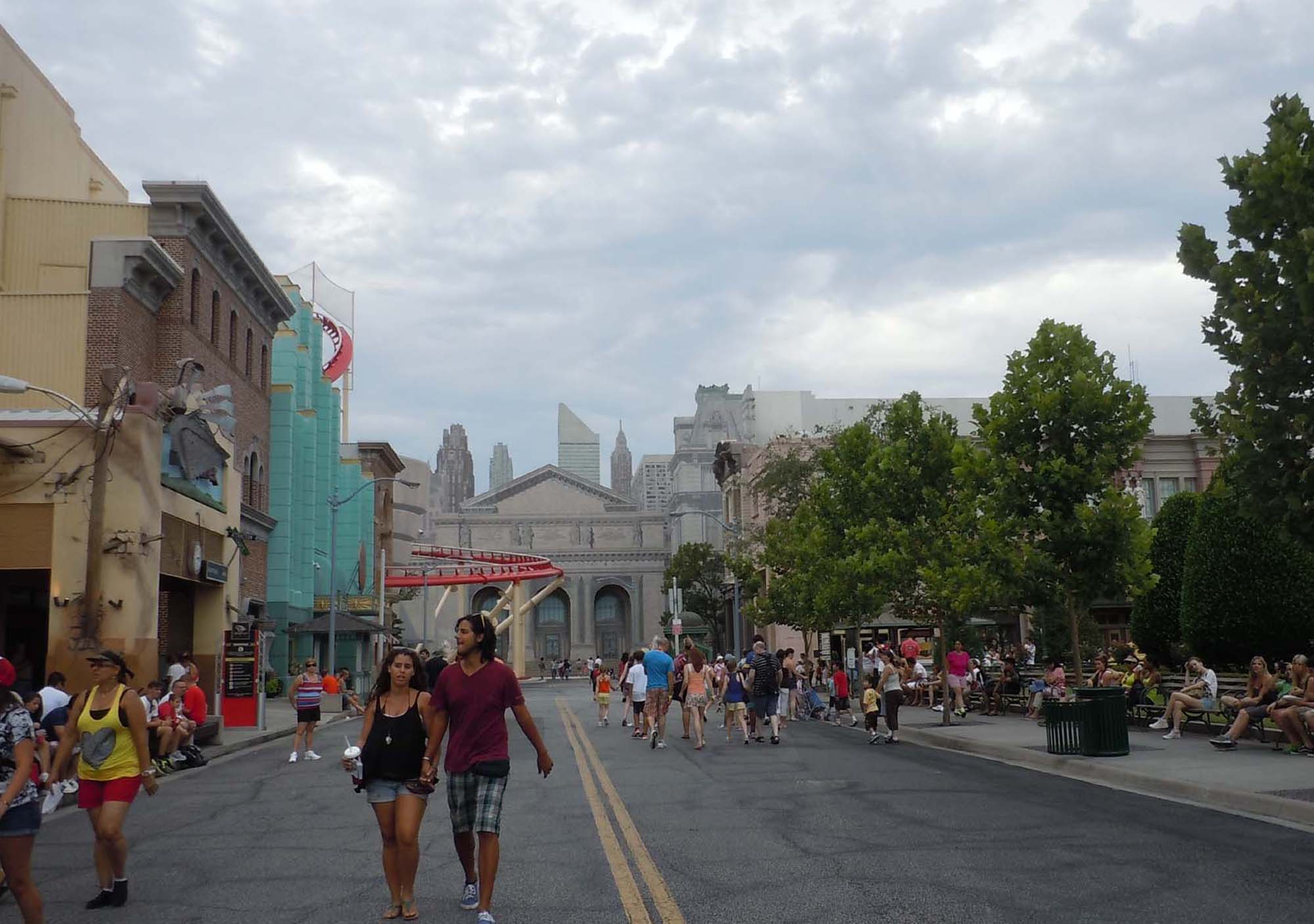 Production Central
The Boneyard was a part of the Backlot Studio Tour, but you could also walk around all the vehicles and objects used in many of Universal’s productions. But with the building of the Universal Music Plaza stage and viewing area, even more renowned bands are able to play for Universal guests during Mardi Gras and other special events. Hollywood Rip Ride Rockit also gets its share of spectators even when bands are not performing. 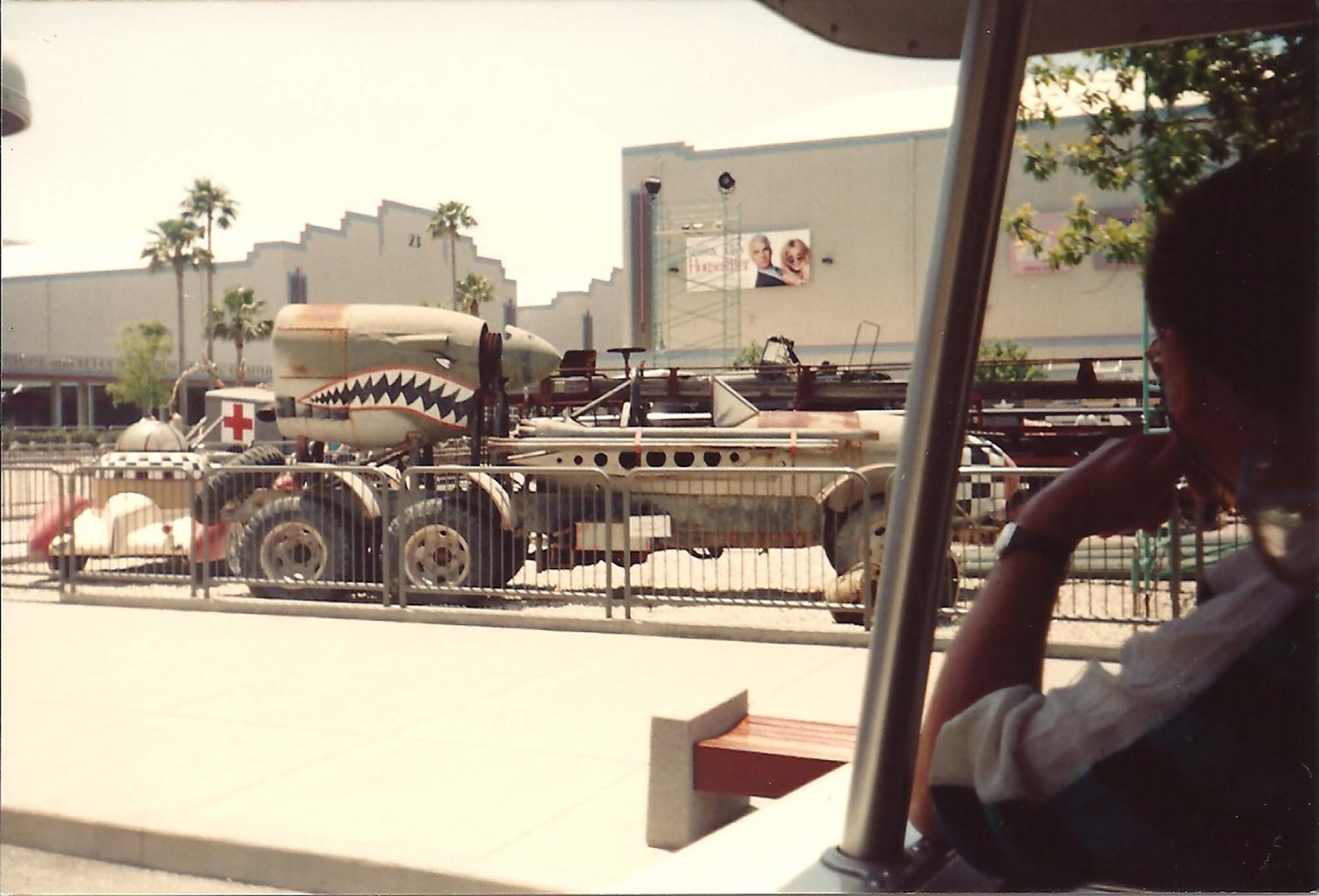 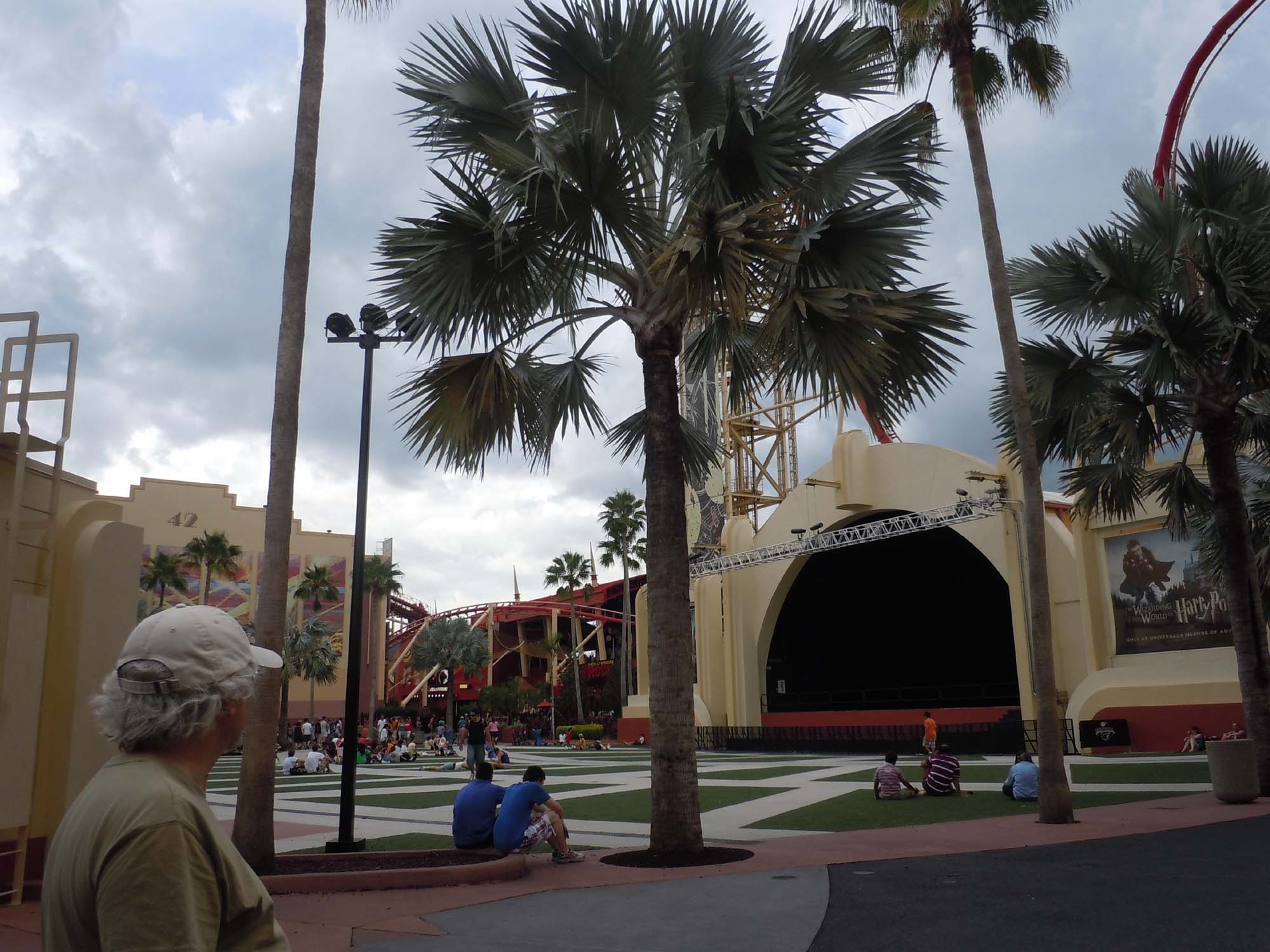 Needless to say, every time we go to the Universal Orlando Resort we notice something new, and it’s one of the core reasons why we continue to be Annual Passholders. The next time someone says they’ve been to Universal Studios but not recently, I’ll pull up this article and show them HOW the place has changed and then challenge them to see for themselves. You should do the same!