One of my favorite shops to visit in all of the Wizarding World of Harry Potter is the Weasley’s Wizard Wheezes toy and joke shop. Universal did such a great job that it mirrors what was in the Harry Potter franchise, both the books and movies. Located at 93 Diagon Alley, the Weasley twins’ shop is a great place to pick up some of the best Harry Potter merchandise. 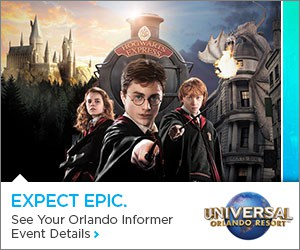 The Sneakoscope itself is battery operated (comes with 4 batteries) to make the colorful flashing lights go off when it is moved. It has a ball inside which adds a knocking sound to it. The bottom part of the item is motorized and actually spins. So give it a few twists, let it go, and see what kind of dark magic lies around!

This is item is also available online to purchase on the Universal website for the same price as it in the store: $14.95.

Though not seen in the books or movies, Bubble Blowing Boy is a fun toy especially when you have a group of friends around. It does exactly what is says and more. Place the bubble liquid inside and watch Bubble Blowing Boy blow bubbles and burp!

It is 8.5 inches tall and 5 inches wide. Bubble Blowing Boy comes with batteries and bubble liquid.

Another invention by the Weasley twins is the Decoy Detonator. The Detonator serves as a diversionary device, which is designed to distract an individual or group of individuals. When activated in the franchise, the horn like device travels a short distance, makes noise, and emits a poof of smoke. The Detonator was seen in the Deathly Hallows Part 1 when Harry Potter and friends infiltrate the Ministry of Magic to get to Dolores Umbridge’s office in search of a horcrux.

The Detonator from the store is slightly different. Tamed down for Muggle use, I suppose. Pull back like a friction controlled toy car and let it go to make a bunch of noise like in the movie. Guaranteed to distract…

This too is also available online to purchase at the Universal website for $18.95. Batteries are included.

Besides He-Who-Must-Not-Be-Named, the most despised character in all of Harry Potter is Dolores Umbridge. Also known as Madam Undersecretary Professor Dolores Jane Umbridge, she at one point installed herself as the Hogwarts school “High Inquisitor.” She cruelly punished the children at the school and teachers. For example, she forced Harry to use a Blood Quill that ended up scaring Harry’s hand with whatever he wrote with it. She even sent a Dementor after Harry and his cousin.

Though we no longer have to worry about her (although there’s a new book about the former Umbridge coming out soon), you can watch her ride a unicycle as she is balancing buckets as she did in the franchise. The Cycling Dolores Umbridge was seen in the Half Blood Prince in the Wizard Wheezes shop on a tightrope saying phrases such as “I will have order!”

The toy is battery operated (included) and just cycles forward when turned on. If you have not seen it before, the cool thing is that you can see the Cycling Umbridge in the Weasley’s store in Diagon Alley. So the next time you are in there, look up!

The Extendable Ear were created by Fred and George Weasley themselves. Though not described to have a human like ear in the book (“thin piece of flesh-coloured string”), the ear is attached to a long wire that connects to an ear piece. The ear amplifies whatever sounds or conversations are being had by it and sends it directly to the user with the earpiece.

It was famously used by Harry Potter in the Order of the Phoenix. While upstairs, Fred, George, Ron, and Harry used it to listen in on the conversations being had downstairs by the Order of the Phoenix. Crookshanks, Hermonie’s cat, famously interrupts the eavesdropping by knocking the ear off of its string. Despite Molly Weasely’s dislike of the gadget, the Extendable Ear proved handy throughout the horcrux search for Harry and his friends.

The Extendable Ear from the store is attached to a 12-foot cord with an amplification/control box in the middle. It is available online to purchase at the Universal website for the same price as it in the store: $22.95. Batteries are not included.

While most of these items are best suited for Harry Potter fans, everyone can enjoy taking something back from one of the coolest stores in Universal Studios Florida. Make sure to check it out while you’re in Diagon Alley.

Check out some of the items to purchase online at Universal’s Official Store.

What’s your favorite toy from the store? Let us know in the comments below.

Step inside the original houses at Halloween Horror Nights 2016

Hi everybody! I am a huge fan of Universal and Disney. I have annual passes to both parks and try to visit them at least once a month. More often than not, I can be seen with my wife, Annie. I really enjoy dining at the parks and would rather make my stomach hurt by eating as much food as possible rather than get on rides that turn my stomach inside out. I do not receive any compensation from the parks, nor do I own any interest in them either.