Christmas time is here and now the holidays at Universal Orlando have finally begun. Orlando is absolutely incredible this time of year; each theme park gets into the action in their own special way.  Universal Orlando’s holiday celebration is very special and unique, offering holiday cheer in a way that only Universal can. Though these festivities are always the last to start each year, (typically they start the first weekend in December), the level of excitement and joy makes the wait worthwhile. I was invited to cover the kick off of the holidays at Universal for Orlando Informer, here are all the highlights of this year’s offerings as well as some behind the scenes treats! 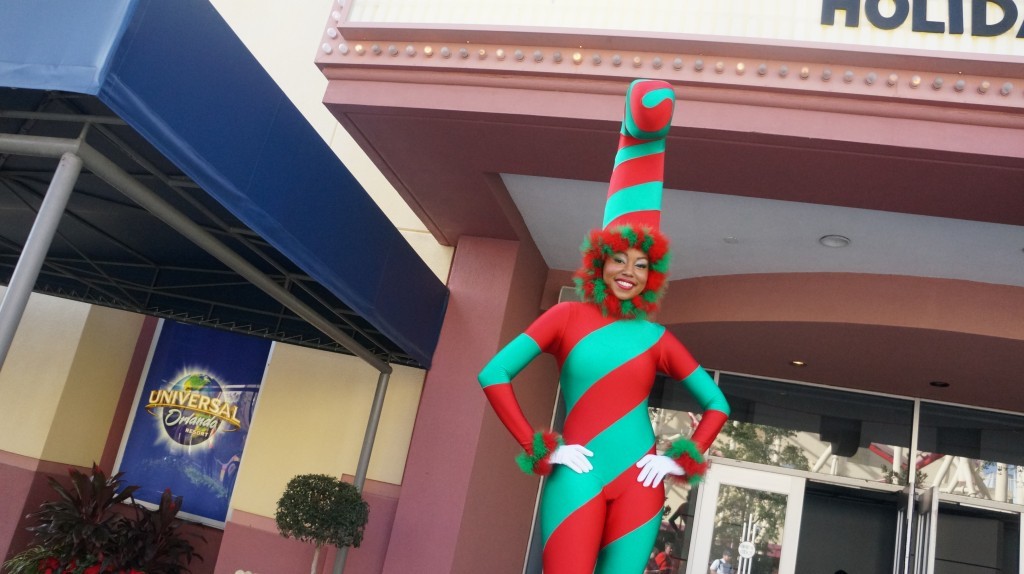 Welcome Christmas, bring your cheer. That’s the spirit you’ll feel throughout Seuss Landing, the most festive land within Islands of Adventure. There are decorations adorning every building and structure here. Citizens of Whoville, in their Christmas-y best, come out to the streets to meet and give their seasons greetings. 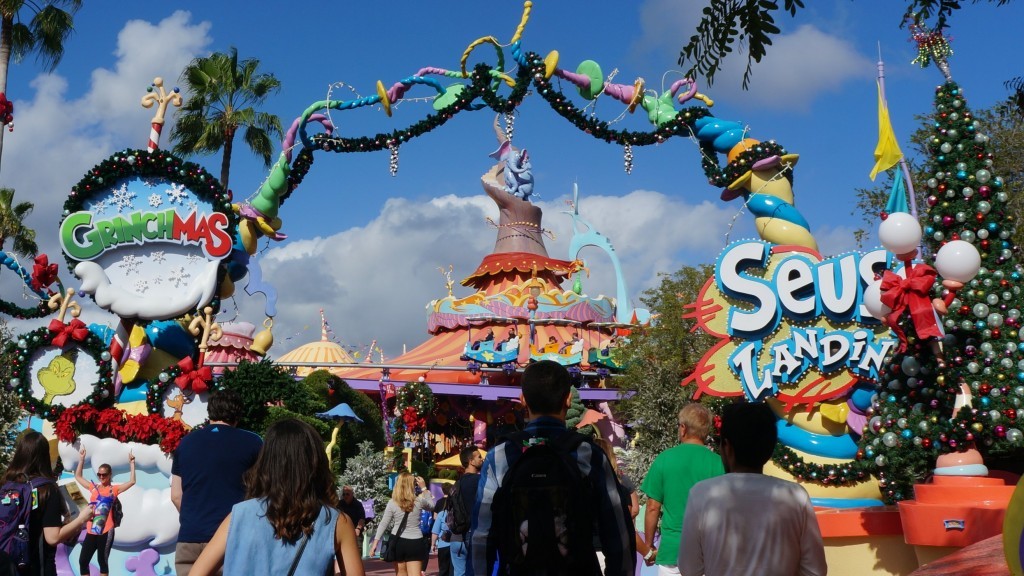 The centerpiece of Grinchmas is the live show, “How the Grinch Stole Christmas.” This show is very popular, the first and last shows of the day draw a very large crowd, so be prepared to wait. The production value is very high, the costume are bright and colorful as if this holiday cartoon came to life. This year’s cast has very strong vocal ability and it is highlighted well. During the Universal Holidays kick off event I had the opportunity to interview Lora Wallace, Show Director at Universal Orlando Resort. Lora explained to us that auditions for the show start in June and rehearsals begin in the beginning of November. Her enthusiasm about the show is infectious and it is evident that the cast works hard to bring us a thoroughly enjoyable show. 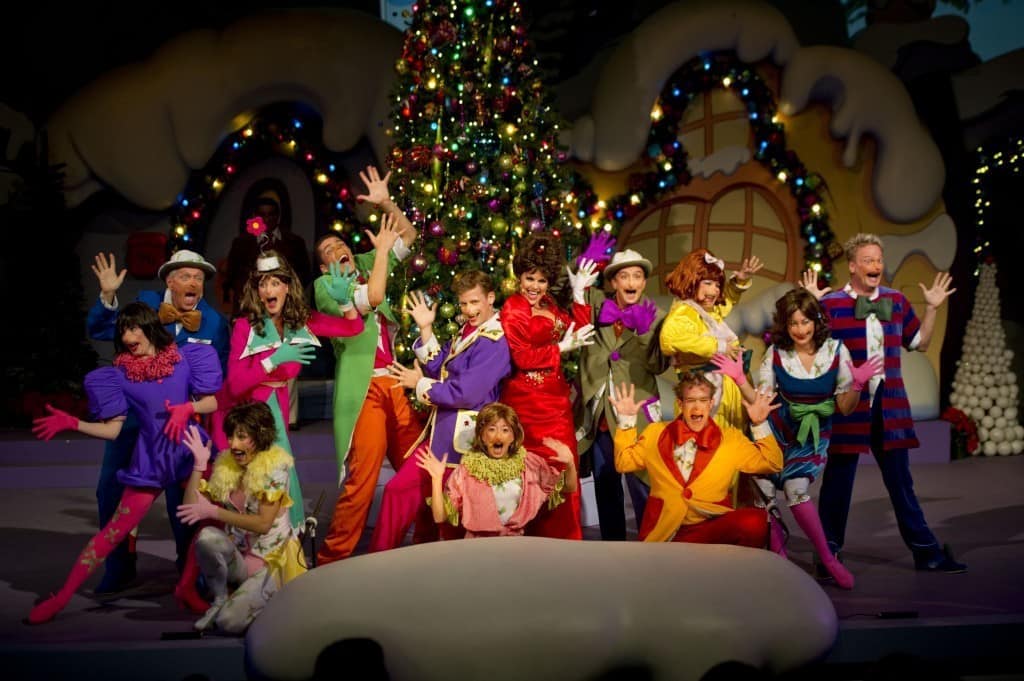 How the Grinch Stole Christmas at Universal’s Islands of Adventure. 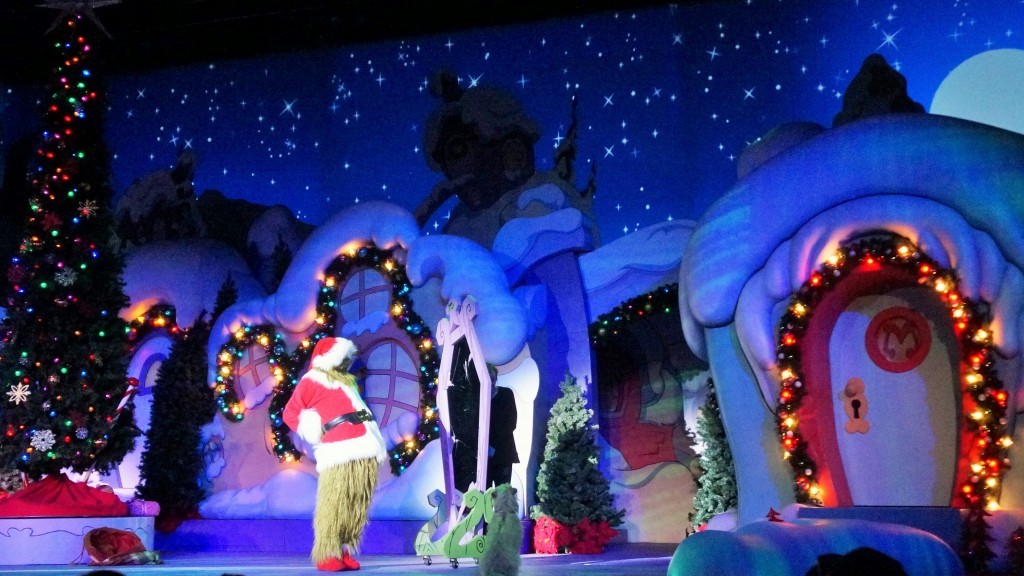 How the Grinch Stole Christmas at Universal’s Islands of Adventure.

The star of the show, the Grinch, brings the snark we’ve come to expect from Jim Carey’s rendition of the character, as well as the warmth, that is reminiscent of the classic cartoon. I got to have a quick interview with the green, mean one himself. Although the three words that describe him best are stink, stank, stunk, he claims that the three words that best describe his show are awesome, awesome, and awesome – and I tend to agree. Whether you’re more of a fan of the original cartoon or Universal’s live action film starring Jim Carrey, this show is a definite must-watch.

While inside Islands of Adventure take a stroll over to Hogsmeade Village to enjoy the decorations that adorn a few select places. These decorations are simple, but perfectly themed and give the village a very wintry feeling.

Fourteen years ago the most iconic holiday parade in America traveled from New York City down the Eastern seaboard to Universal Studios Florida. Like so many children in America, I grew up watching the Macy’s Thanksgiving Day parade and fourteen years ago when they announced that Universal would be the proud recipient of a select group of floats and balloons, I was ecstatic. And I still get giddy each year for its arrival.

As part of the kickoff festivities we were able to tour B79 (aka, the parade building, where they store the balloons for the parade). Walking into this building was a dream come true. Before my eyes the bright balloon giants greeted me, Happy the Hippo all bulbous and rotund, smiled down at me (and yes, I want a hippopotamus for Christmas – such a cute song!) 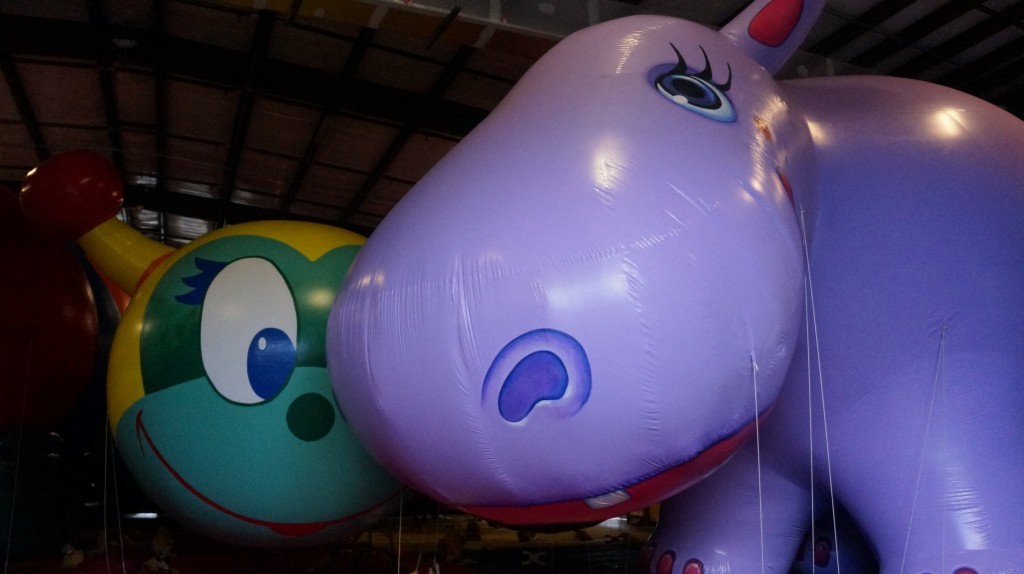 There to greet us (besides the balloons) stood John Piper – Vice President, Macy’s Parade Studio and Amy Kule – Executive Director of the Macy’s Thanksgiving Day Parade. I had to hold back being a little star-struck because I’ve seen Amy leading the parade for many years now on TV.  Amy and John’s passion for the parade permeated the building. They explained that over the years elements of the parade have evolved. A lot of the floats, balloons, and other elements, like a balloonicle which combines a balloon with a vehicle are special recreations of elements in the parade in New York City. They are scaled specifically for the unique streets of Universal Studios Florida.

This year the parade kicks off with an all new balloonicle inspired by a float that has become iconic to those who watch the Macy’s Thanksgiving Day parade annually. Tom Turkey leads the parade each year, for the past few years. He is a recreation of a float that was used in the early days of the parade. As John explained to us in a one-on-one interview later in the day, more winter holiday details were added to Universal Orlando’s version since the Macy’s Holiday Parade is more about Christmas and other winter holidays rather than Thanksgiving. 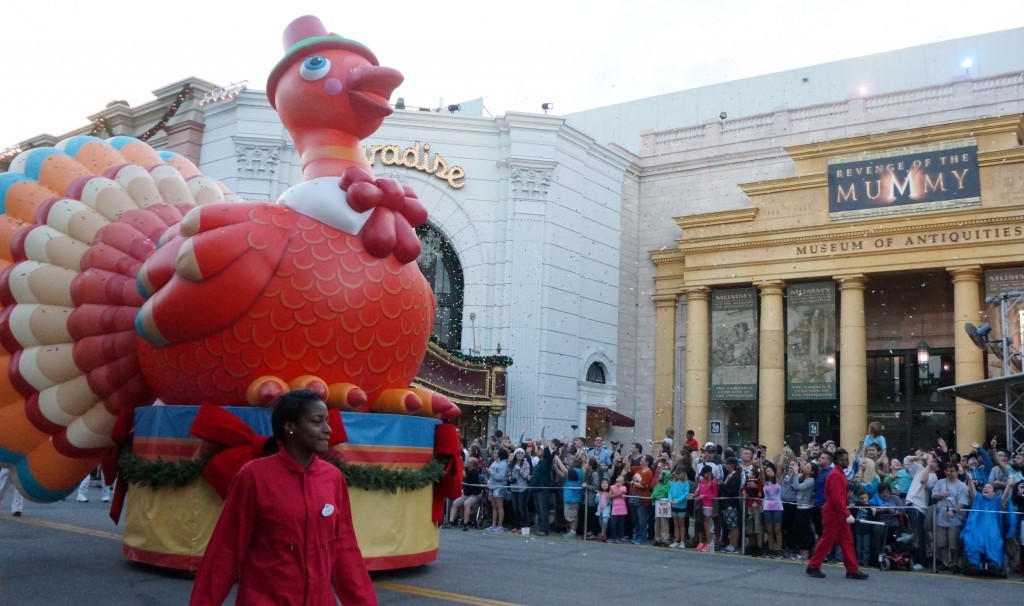 While inside the balloon assembly building John showed off the second newest edition to the parade, a string of Christmas lights that actually light up and blink! I am a big fan of these style of lights, known as C7s and C9s, so this string of balloons quickly became a favorite of mine. 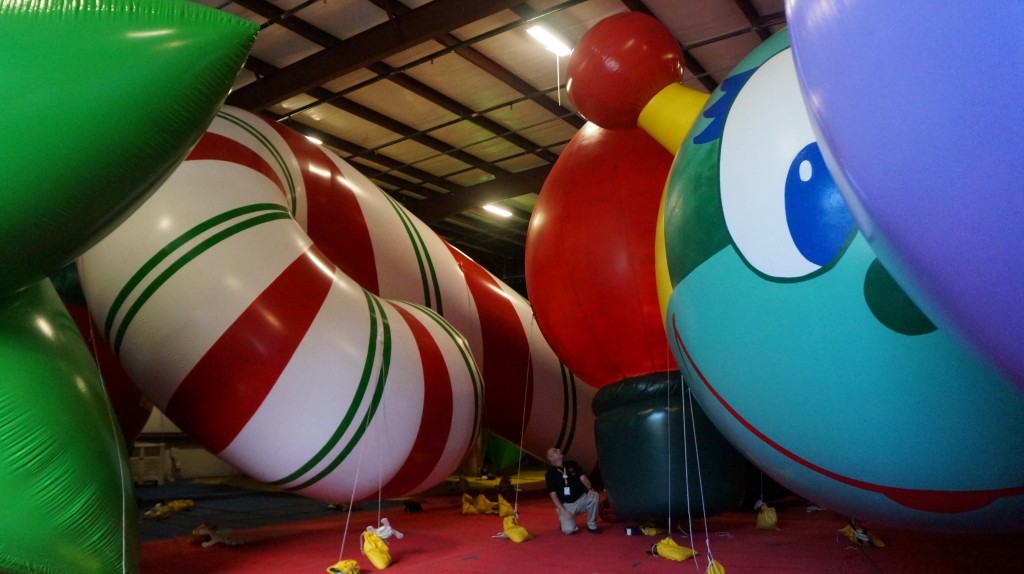 One of my favorite things about this parade (and the Mardi Gras parade) are the pre-parade photo opportunities. Be sure to visit the New York backlot area about two hours before parade step off. Many of the parade performers roam the streets for great photos.

This year, in addition to the new Christmas light balloon and the turkey balloonicle there are some new costumes. Things are bigger and brighter this year. I also love that the Orlando Police Department leads off the parade, giving me all the hometown feels. Even more hometown love comes in the form of dance groups and marching bands, many from nearby Florida communities. 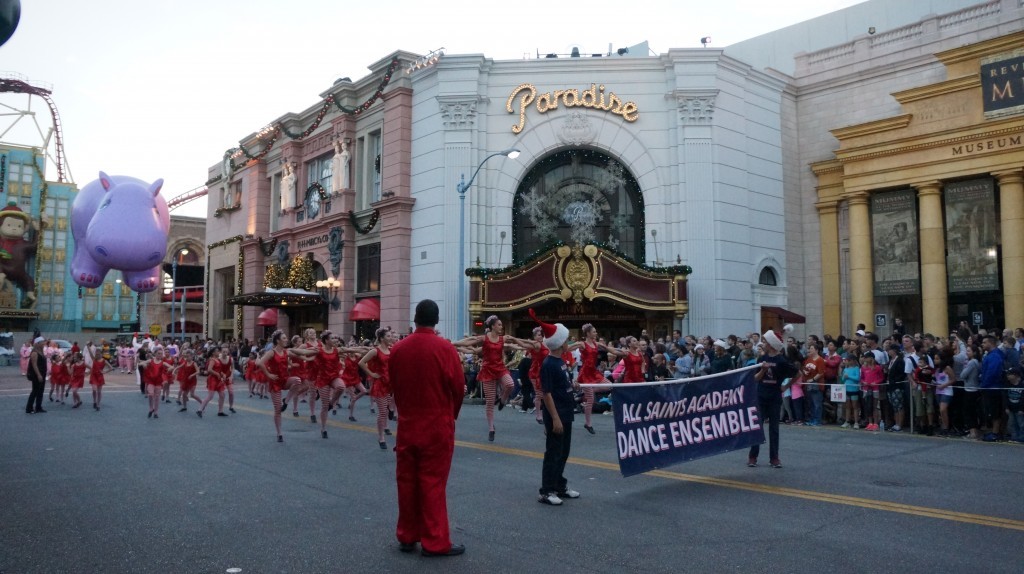 When Tom Turkey and the new string of lights made their debut this year I felt happy, seeing new holiday magic come to this great parade. It seemed the balloon handlers enjoyed showing off their new toy. I can’t wait to see the lights blink during one of the 8pm performances later this year. All in all, it seems like this year’s parade might be the best one yet! 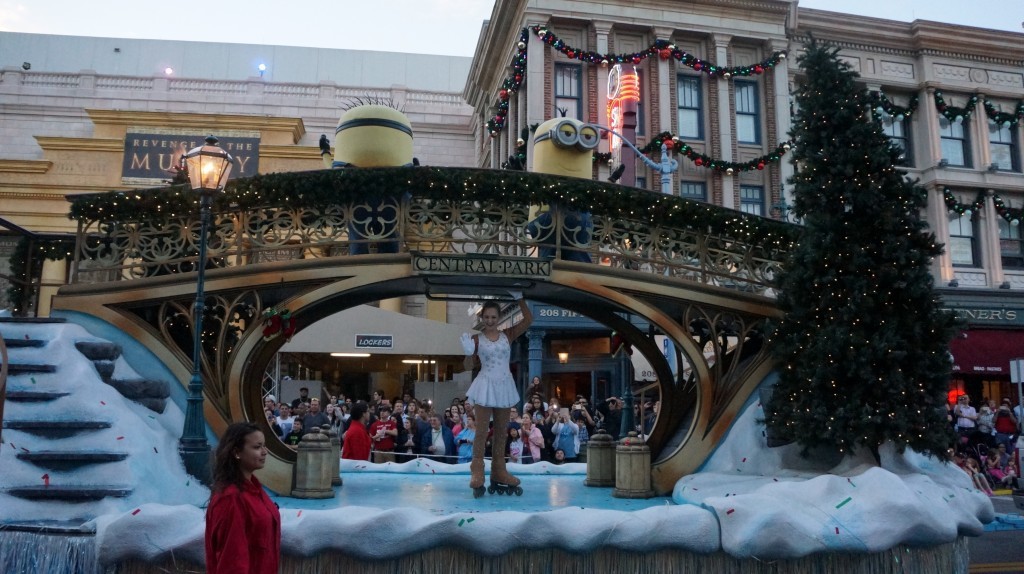 One of my favorites and a float direct from NYC in Macy’s Thanksgiving Parade now at Universal Orlando. 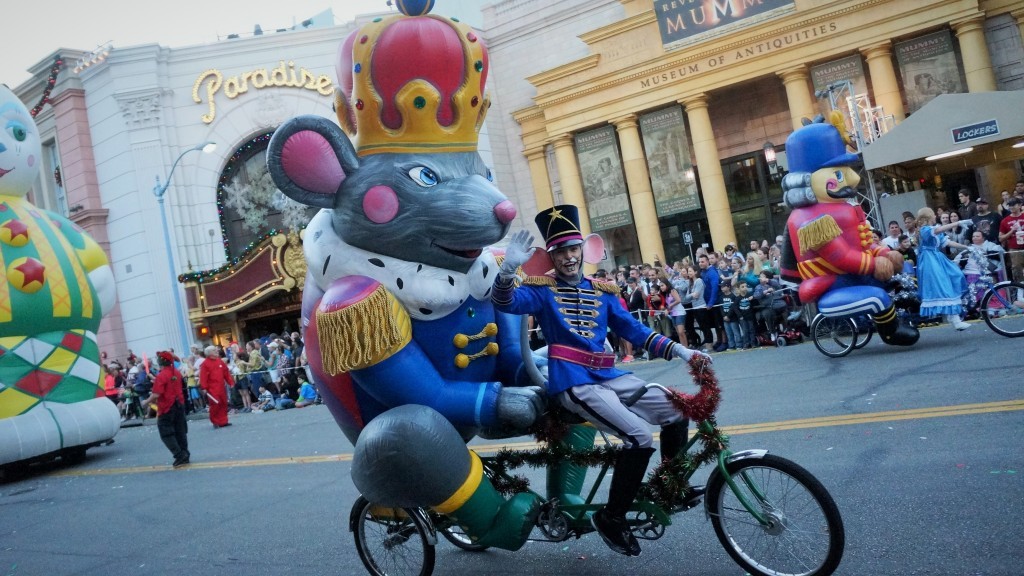 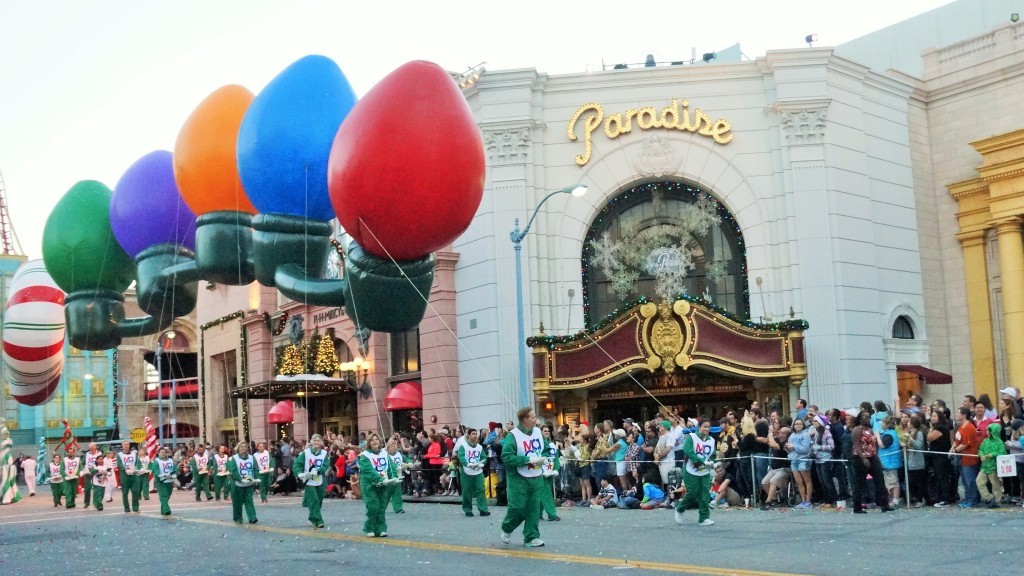 For tips about viewing the parade, be sure to read the Orlando Informer Macy’s Holiday Parade 2015 – visitor guide & tips page. The New York area is my favorite place to catch the parade because of the quick tree lighting ceremony that takes place when Santa’s float makes it around the bend.

While you’re in the New York area be sure to catch the Blue’s Brothers Christmas show. I love the fact that this classic street show is made over during the holidays. It is a toe tapping, fun way to shake your tailfeather and celebrate the season!

This is the first year I finally got to see the Mannheim Steamroller concert. This special kiss goodnight happens on select weekend nights. Whenever my mother and I would decorate the house for Christmas, which was a multiple day event, the music of Mannheim Steamroller could be heard throughout the house. For anyone who appreciates live music, orchestras, or visual effects, this is an enjoyable concert. 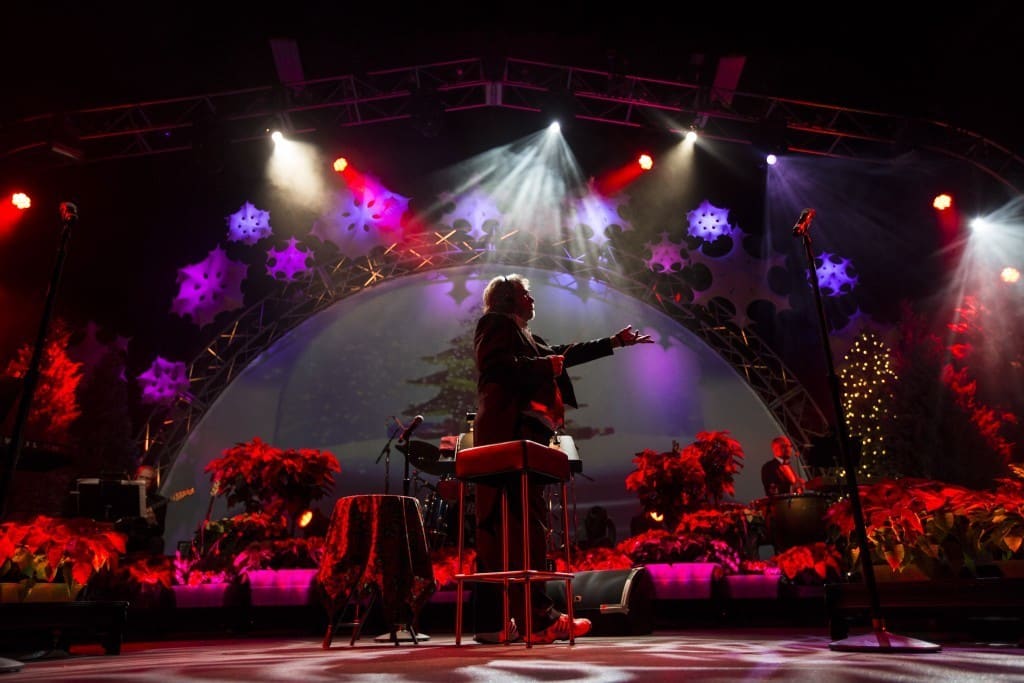 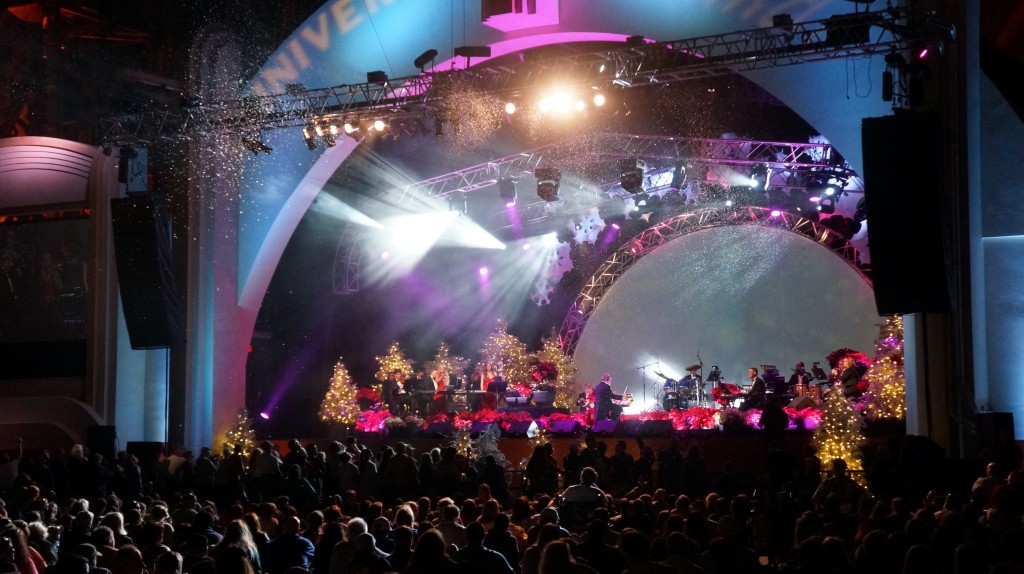 Admittedly, it is a longer concert, clocking in at just under an hour, and there are some slow moments. So, keep this in mind if you plan to cap off an all day marathon in the parks with this concert. The grand finale comes when the top cast of the How the Grinch Stole Christmas show from Islands of Adventure arrive on stage to perform all the songs from the show. It is a real treat for anyone who missed the show or enjoyed it so much they want to relive it! 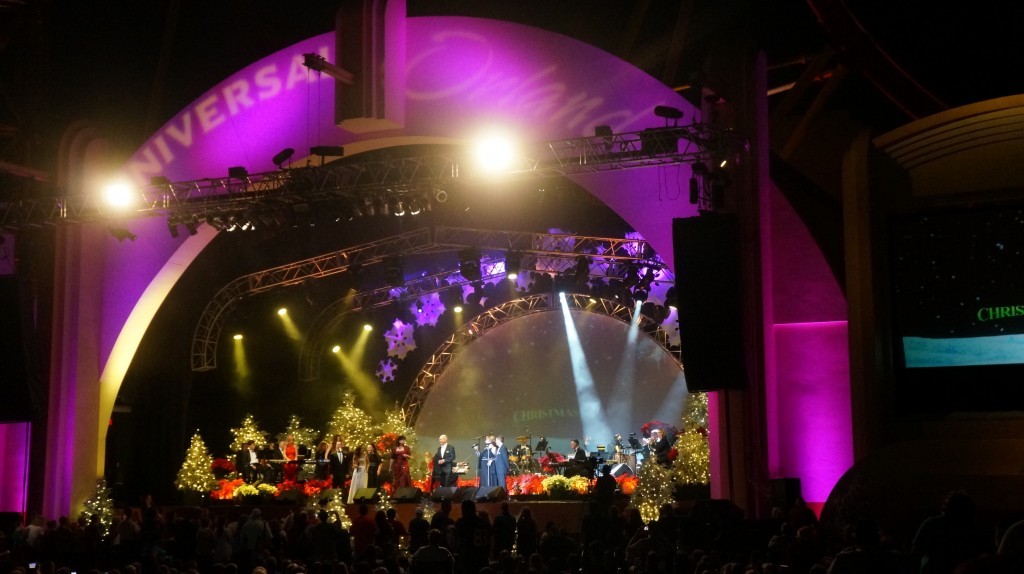 This year feels better than ever, so you can bet I’ll be grabbing a hot butterbeer from Diagon Alley then strolling on over to watch the parade and the special Blue Brothers show, and hey maybe get another round at Hogsmeade Village before strolling through Grinchmas at Seuss Landing. I suggest you hop to it and enjoy  it, because although the Whos have taught us that Christmas Day will always be so long as we have we, the holidays at Universal Orlando will only be until January 2, 2016!

wpDiscuz
0
0
Would love your thoughts, please comment.x
()
x
| Reply
We utilize cookies to ensure that we provide you the best experience on our website. By continuing, you acknowledge our cookie policy.Ok