My visit to Universal Orlando Resort started out with a few glitches but ended up being a great day. Arriving at the Universal parking toll booths, I realized my annual pass was sitting on my desk at home. I didn’t have the time to make the round trip home to get my pass so I explained my situation to the parking attendant. She looked up my annual pass using my photo ID and saved me from having to pay $20 for parking. 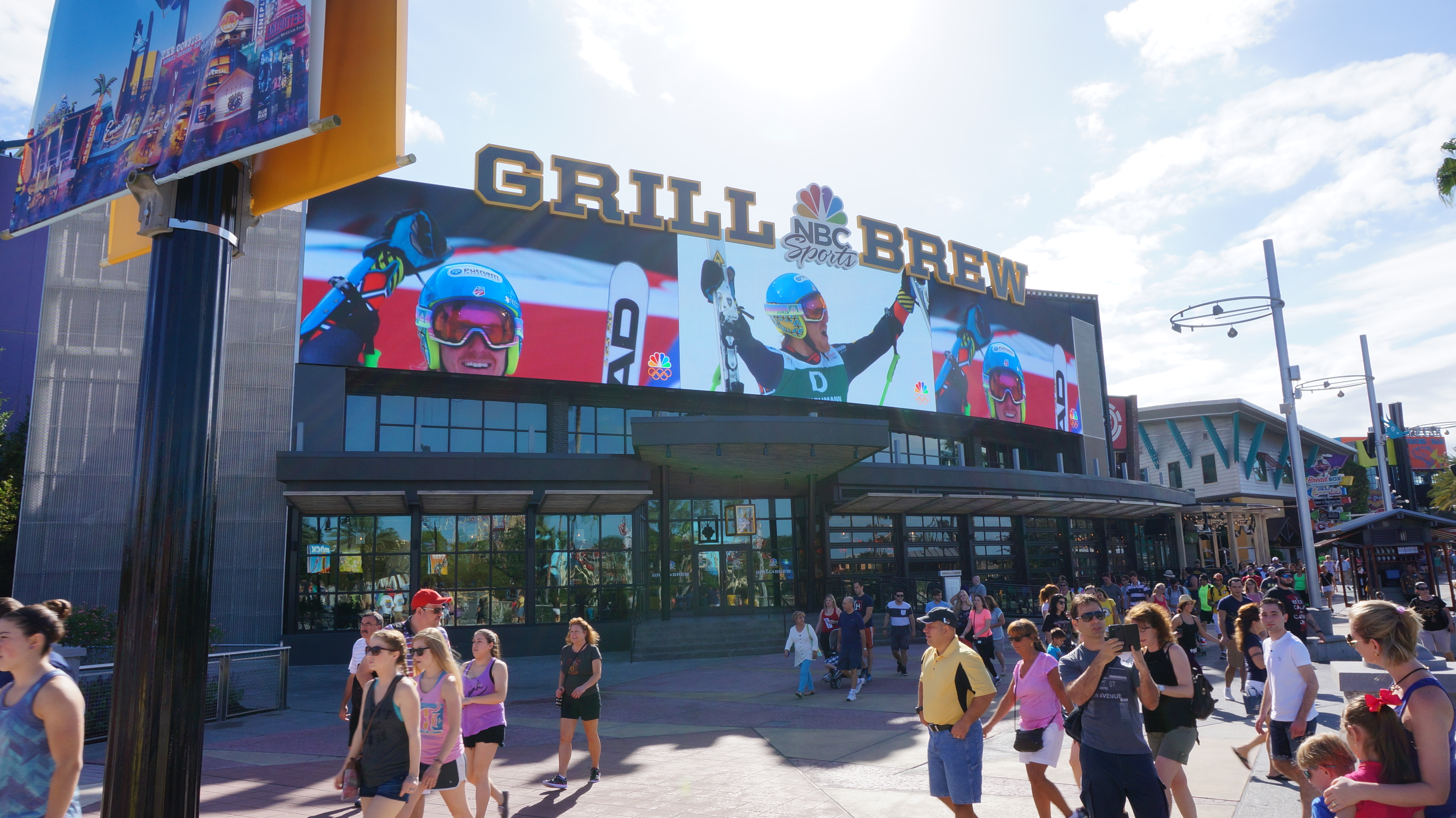 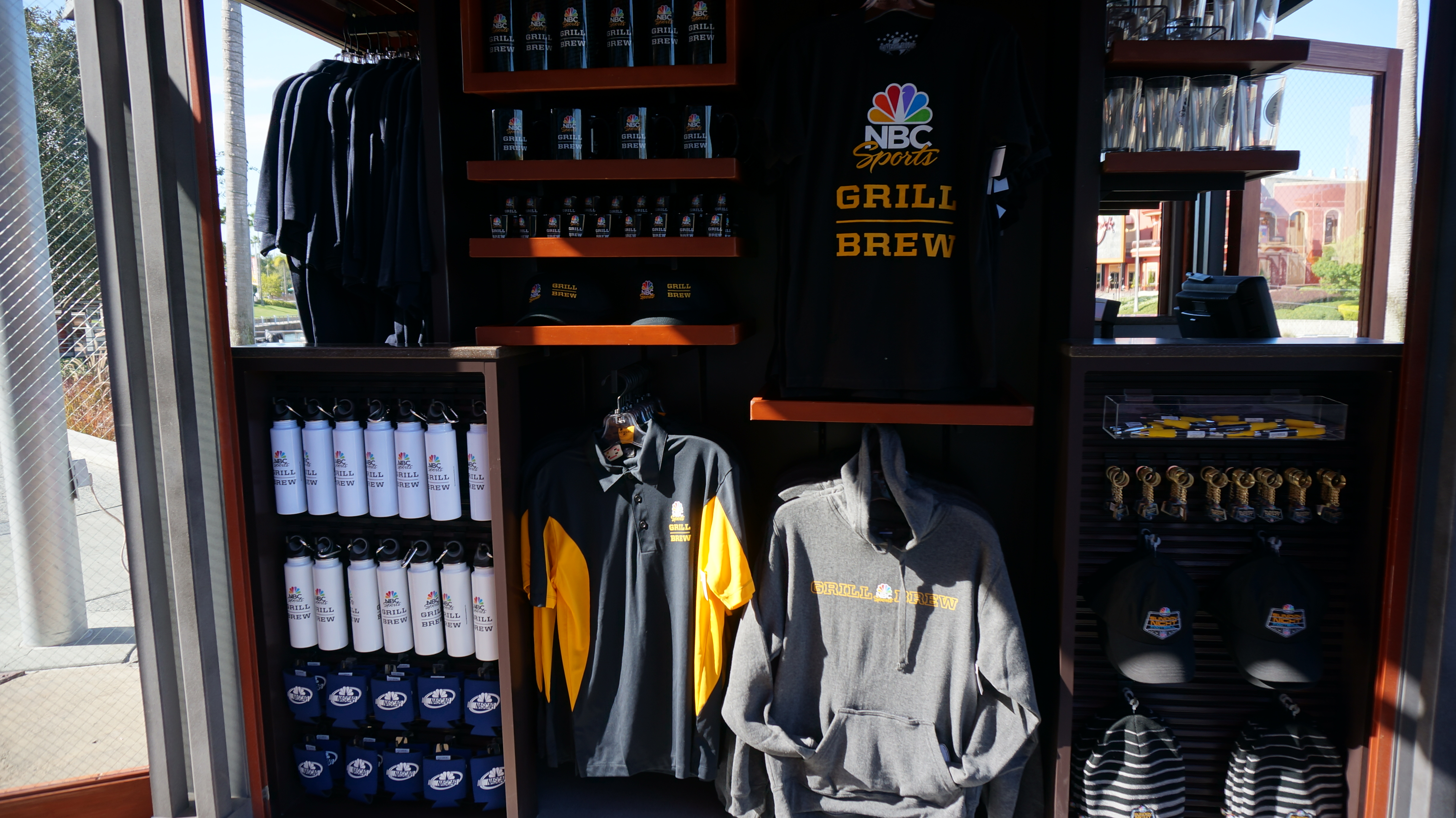 NBC Sports Grill & Brew merchandise available outside of the restaurant.

After walking through CityWalk, I headed toward the outdoor guest relations queue at Universal Studios Florida. It was very busy, which was expected on a Saturday morning, and I waited about 20 minutes in the strong sun before I was able to explain my lack of a park pass to a team member. The employee was very helpful and like the parking attendant, used my photo ID to look up my account. He printed a new pass for me and I headed toward the entrance turnstiles. 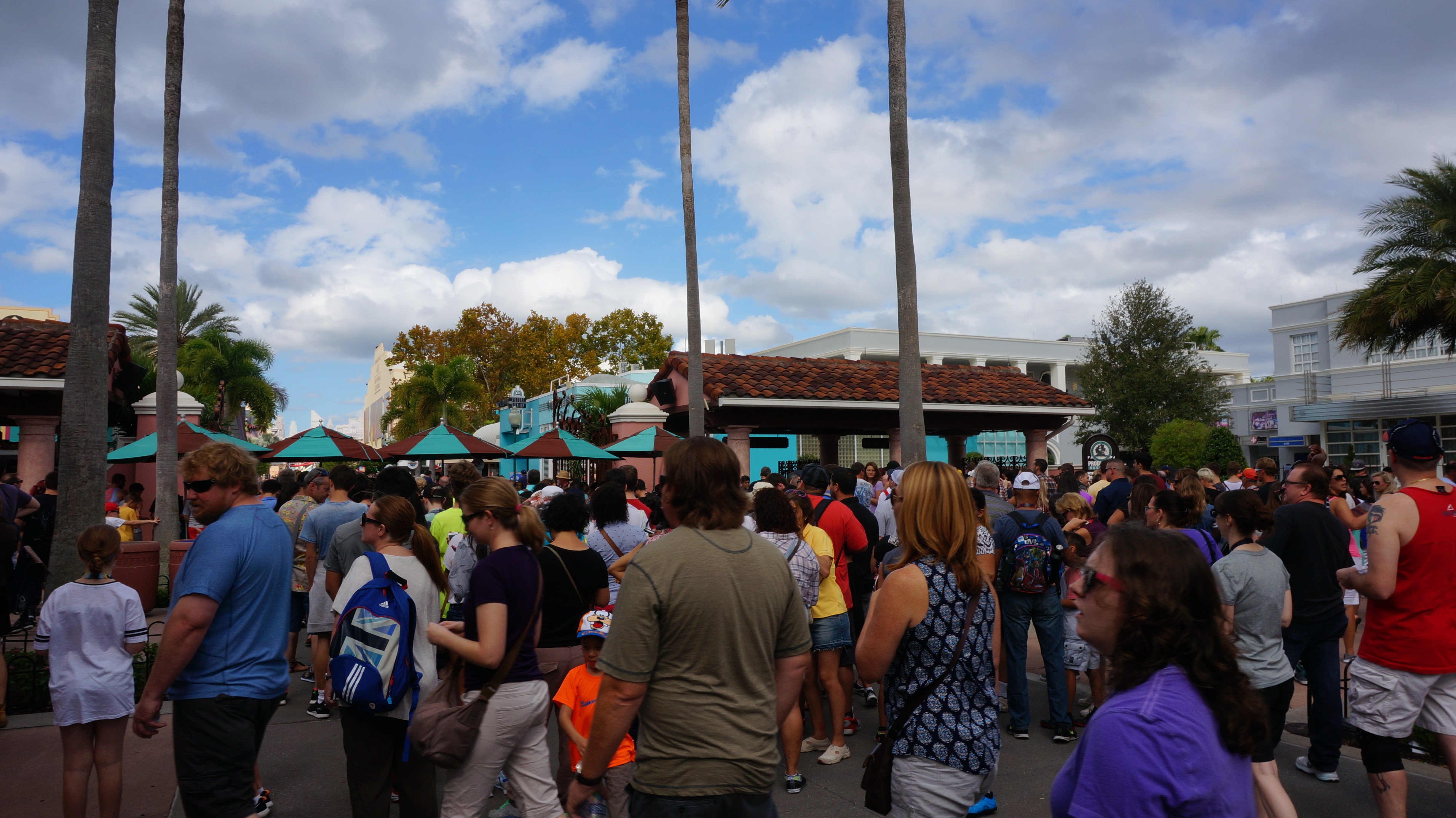 The entrance to Universal Studios Florida.

The entrance to the Studios was very crowded. All the turnstiles were open including the center entrance gates and the lines were still long to enter the park. I decided to walk around to the Blue Man Group side entry to Universal Studios and avoid waiting in the crowd in the hot sun. As I arrived at the side entrance, it was locked. I didn’t pay attention to the time and just walked back to the main gate entry. I waited in the entry queue for about 15-20 minutes and finally walked into the park about 11:05. By this time, the side entry gate at Blue Man Group was open. I learned it didn’t open until 11:00 am and I should have waited just a few minutes more. 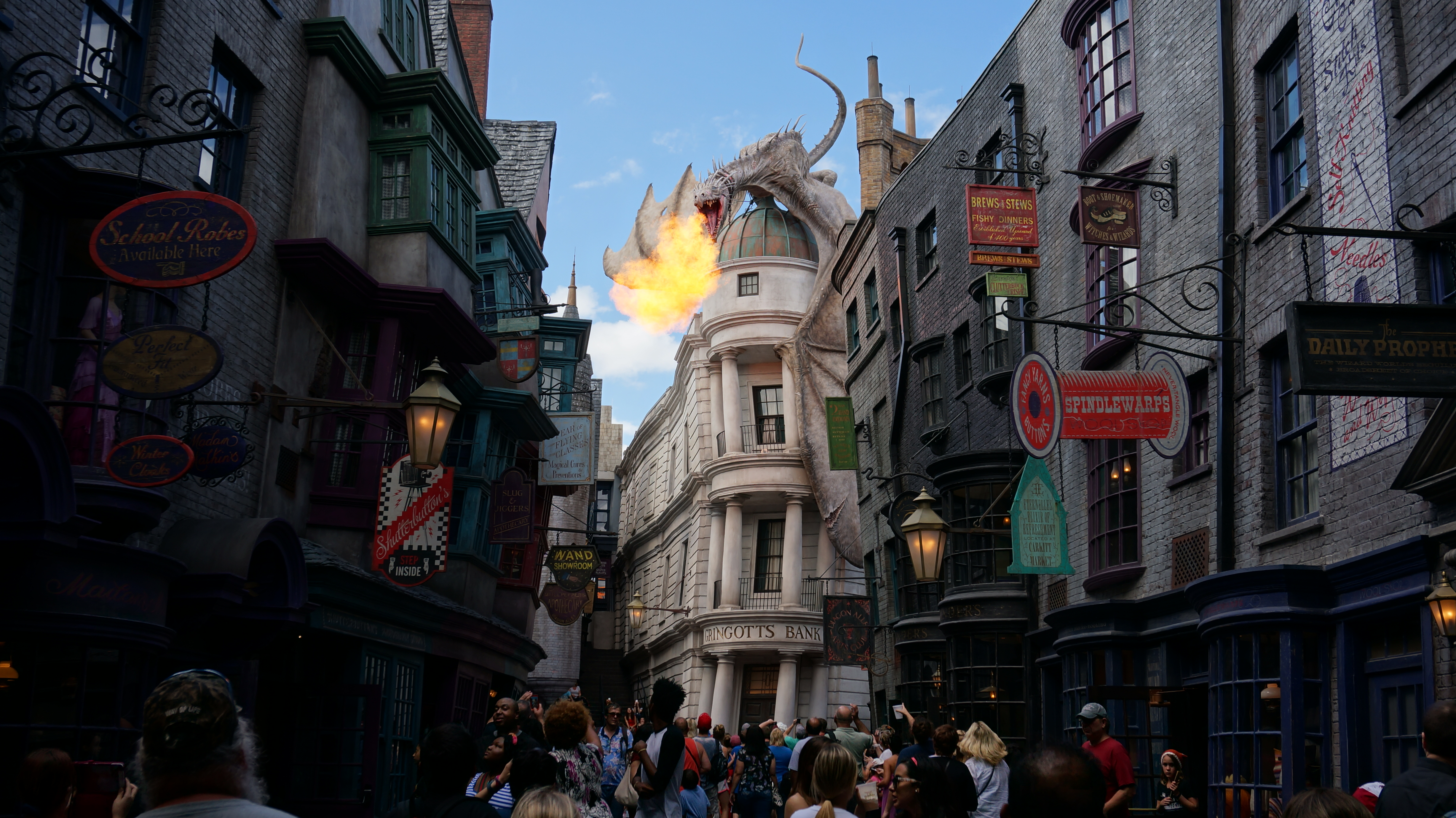 The crowds in Universal Studios were moderate to busy with posted wait times of Despicable Me Minion Mayhem at 70 minutes, Shrek at 30 minutes, Rip Ride Rockit at 30 minutes, Transformers: The Ride at 45 minutes, The Simpsons Ride at 50 minutes, Men in Black at 25 minutes, and Escape from Gringotts at 60 minutes. 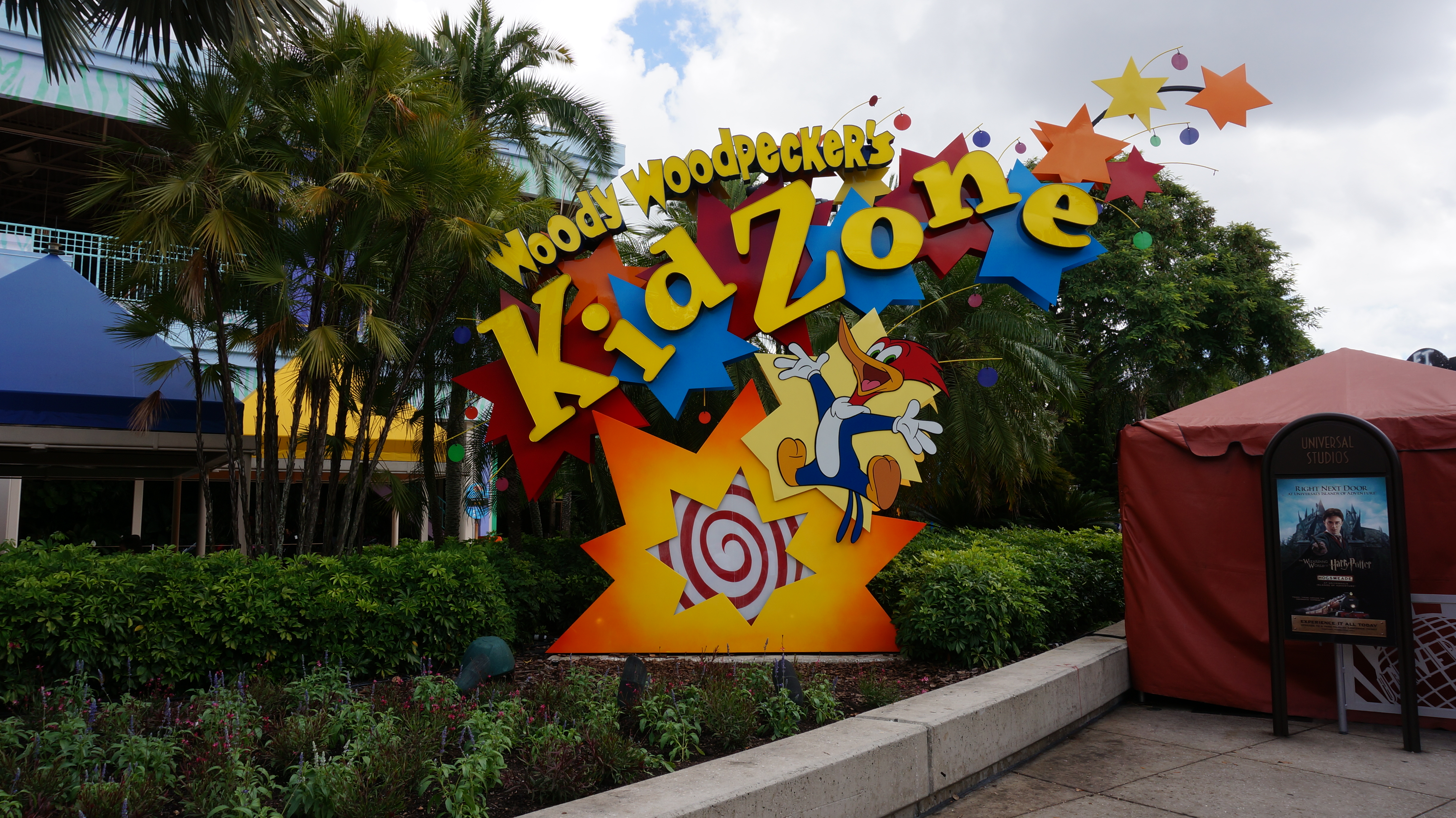 I’m often asked if there are things for families with young children to do while at Universal Studios. In addition to the Character Party Zone, one area designed for young families is Woody Woodpecker KidZone. 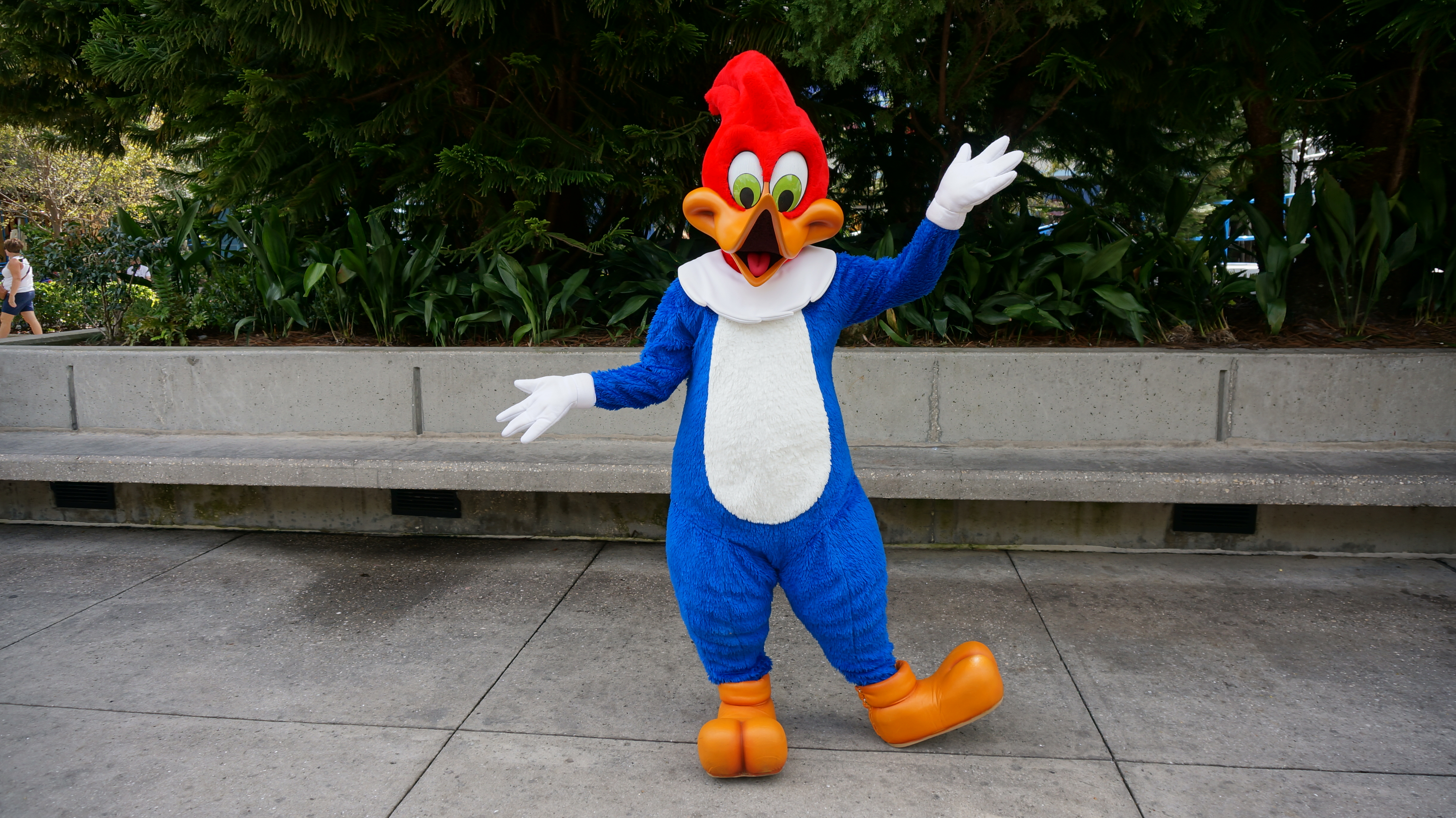 The KidZone has a lot of fun activities for young children including the popular family attraction E.T., the Animal Actors show, the Woody Woodpecker family roller coaster, Curious George Goes To Town interactive water play area and ball pit, Fievel’s Playland, and the classic A Day in the Park with Barney show and indoor playground. Kids can also meet and greet Sponge Bob and his friends inside SpongeBob StorePants. 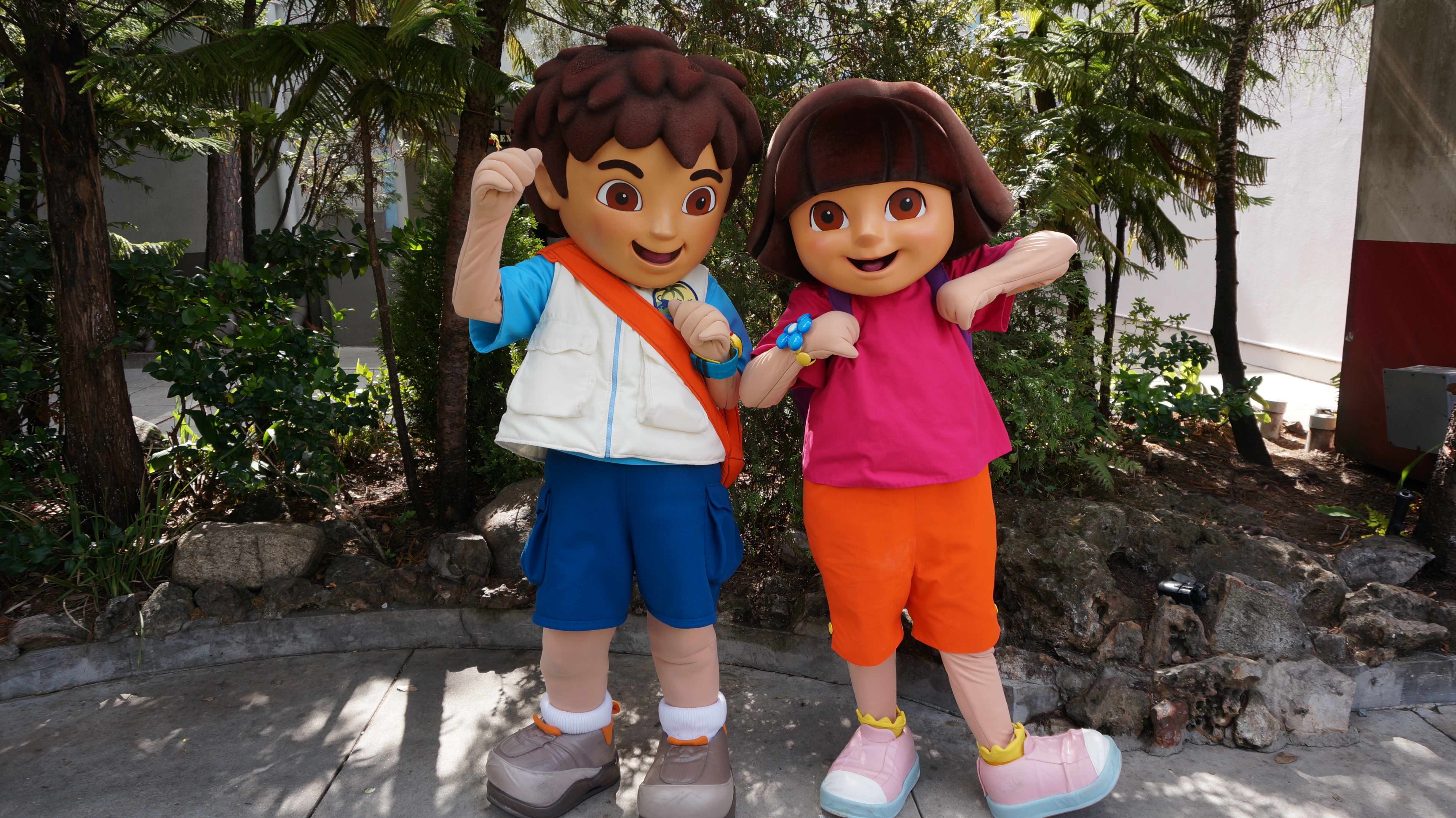 As I was walking around the KidZone, I saw superstars Diego and Dora, Curious George, and Woody Woodpecker meeting guests. In addition, Barney was meeting guests inside his playground. 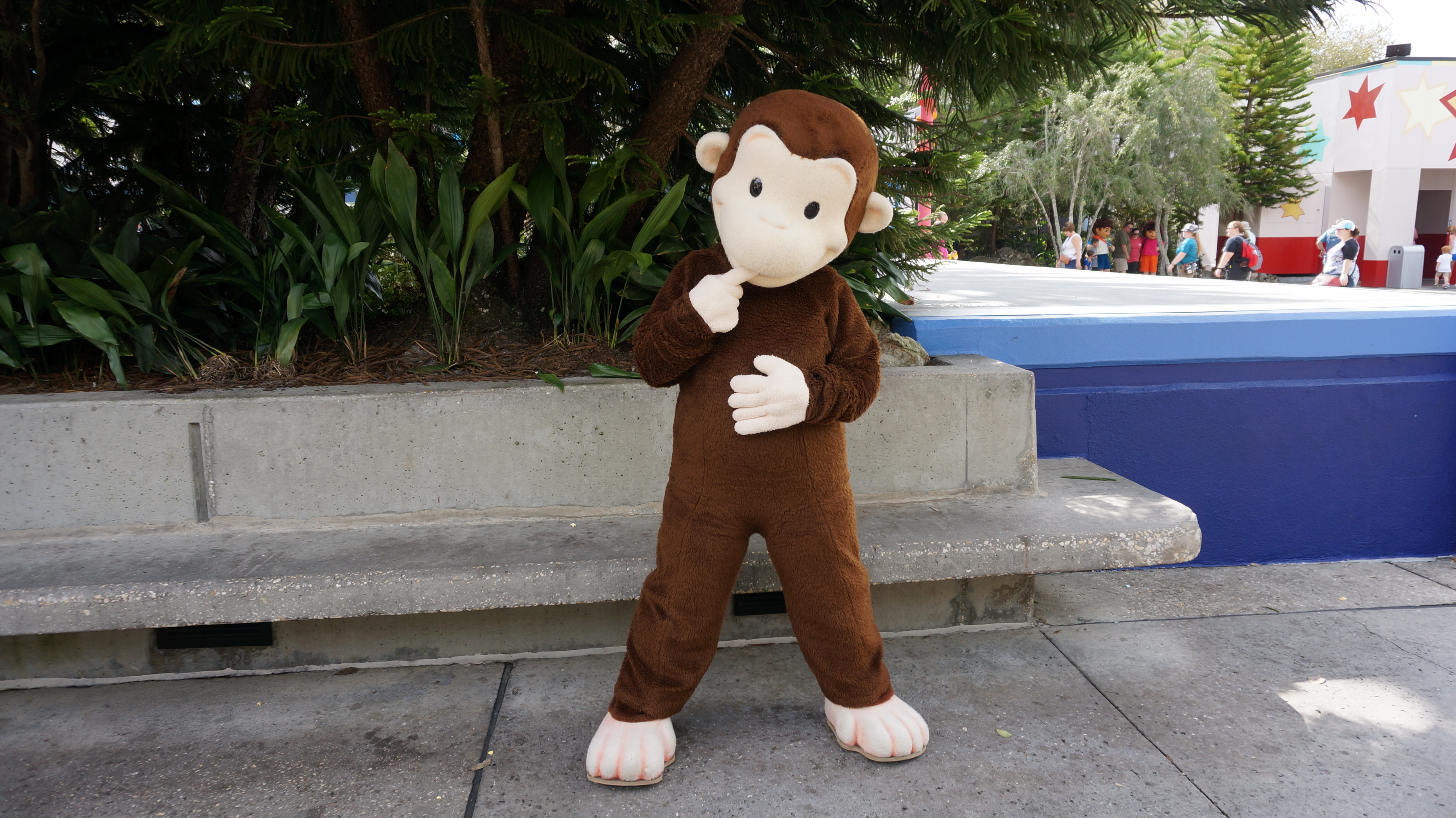 Families who have younger children also ask me if there are any visible scary Halloween Horror Nights props in Universal Studios during the daytime. The answer is no. The scariest thing guests will encounter during the daytime may be images on t-shirts or other souvenirs. If a prop is scary, it is covered. Otherwise, the props that are visible are innocuous. 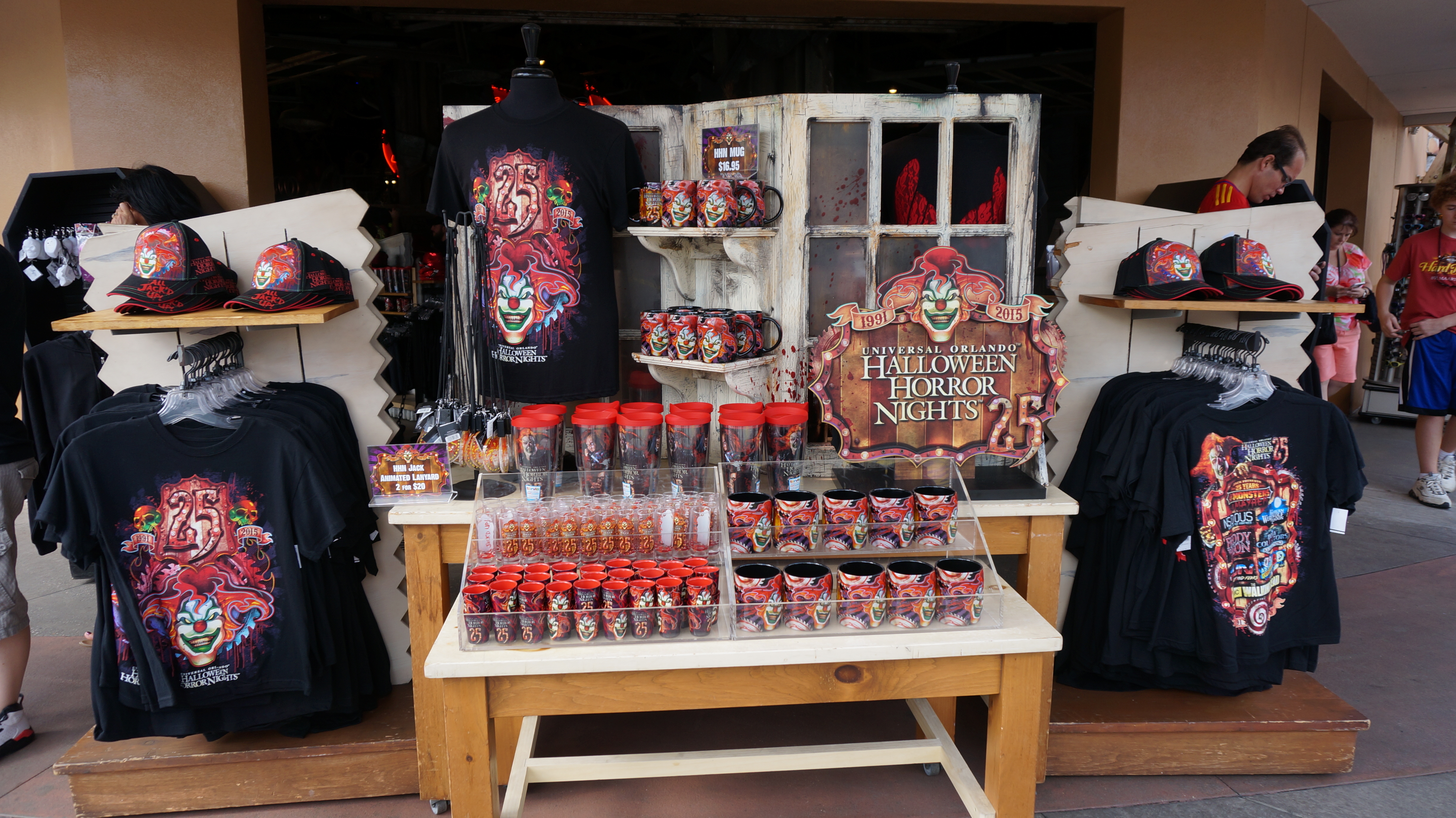 Those guests, like myself, who do not like scary things or don’t want their children exposed to scary or gruesome images can enjoy the studios during the daytime while the more daring guests can experience the thrills and scares of Halloween Horror Nights in the evening. 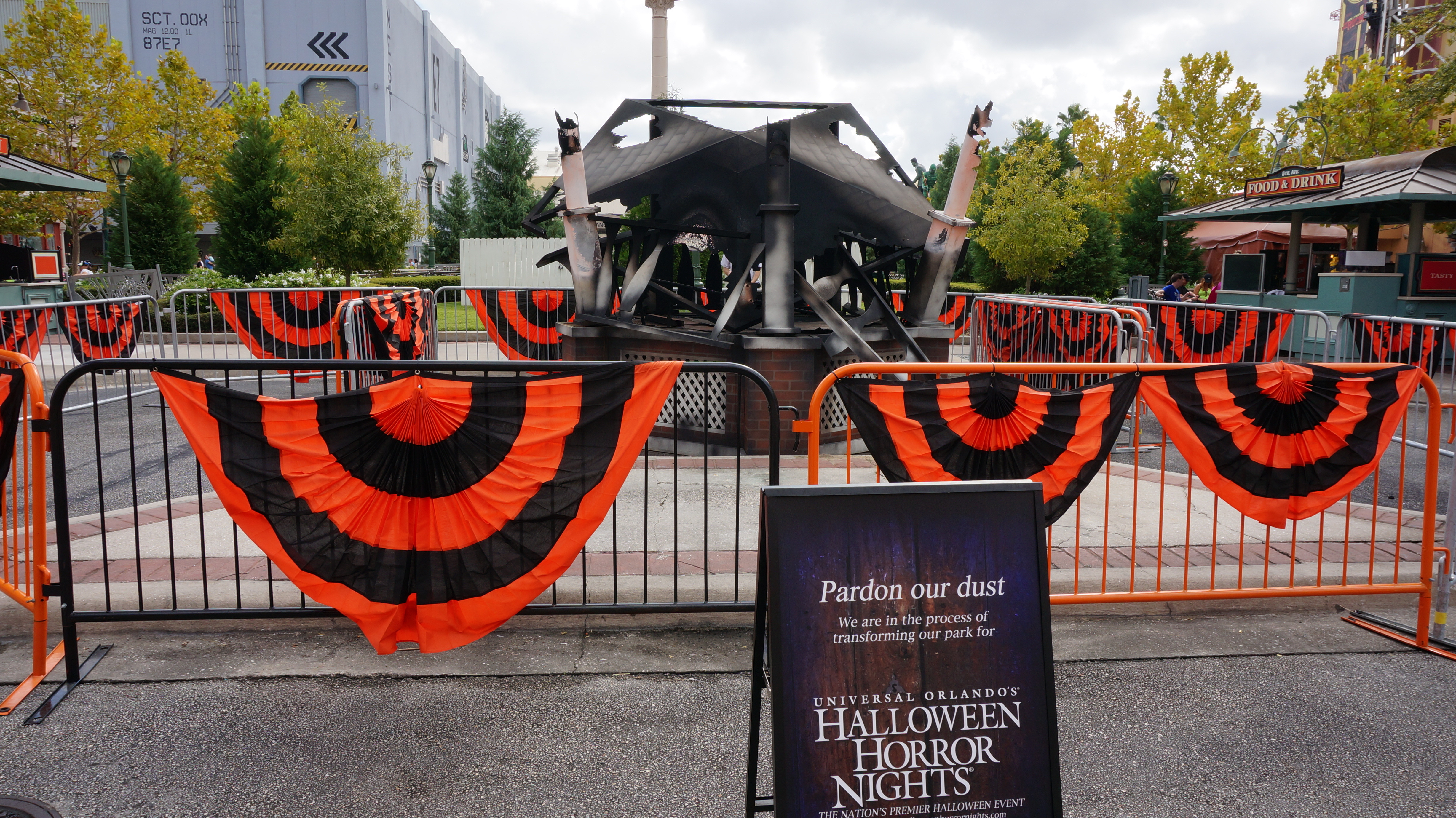 This visit I decided my lunch would be from the Frying Dutchman inside Fast Food Boulevard in Springfield. I ordered the Battered and Plattered fish that included three tasty pieces of fried fish, a generous portion of tater tots and one very small hush puppy. With a drink and annual pass discount, my lunch was $16.47. If you are looking for something besides a burger in Fast Food Boulevard, this fish meal is a good choice. 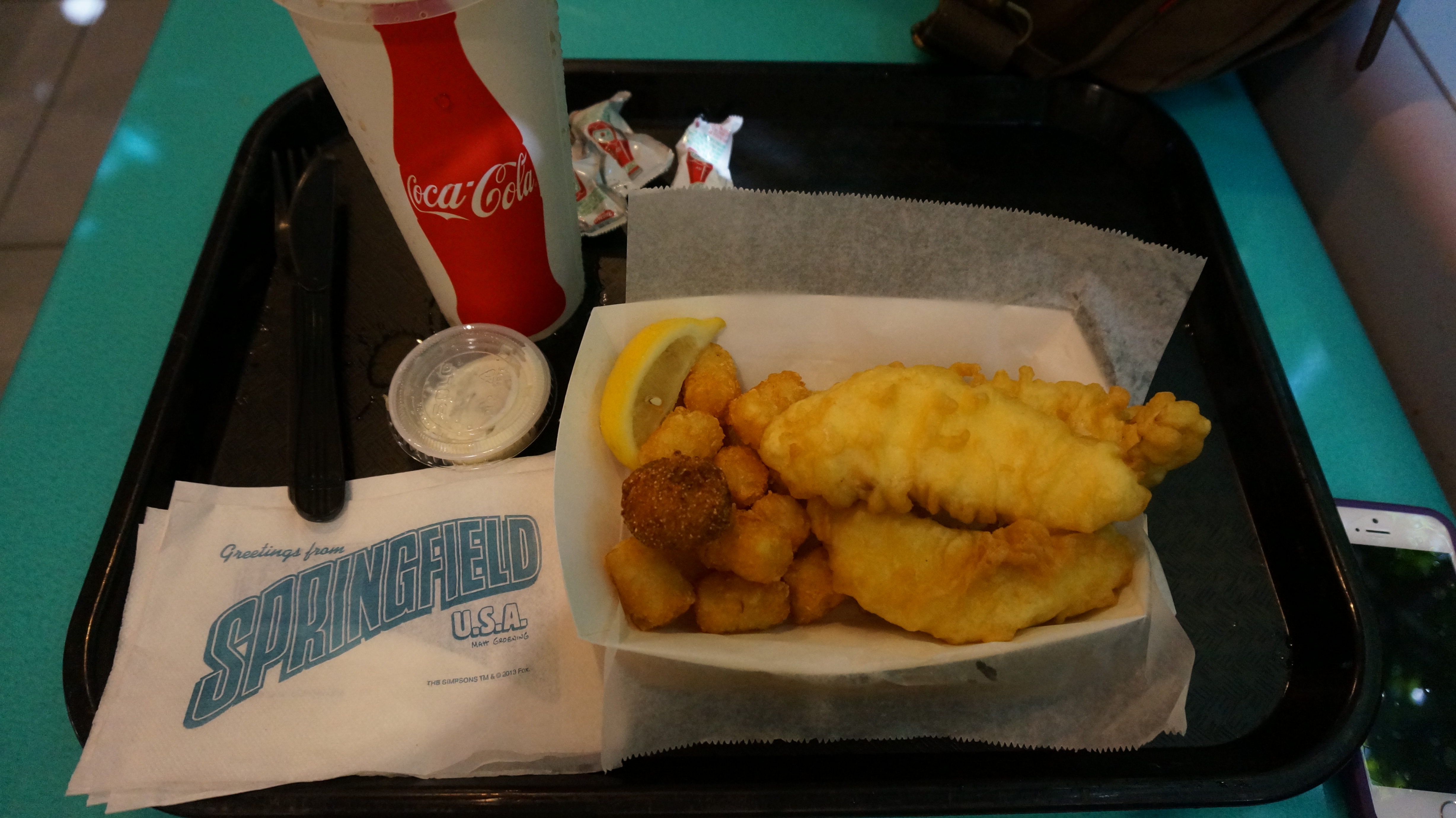 Walking through Universal Studios, I relished the beautiful sunny day and made my way to the London section of the park. Diagon Alley was compelling as always and I stopped to listen to the very talented Celestina and the Banshees perform in Carkitt Market. 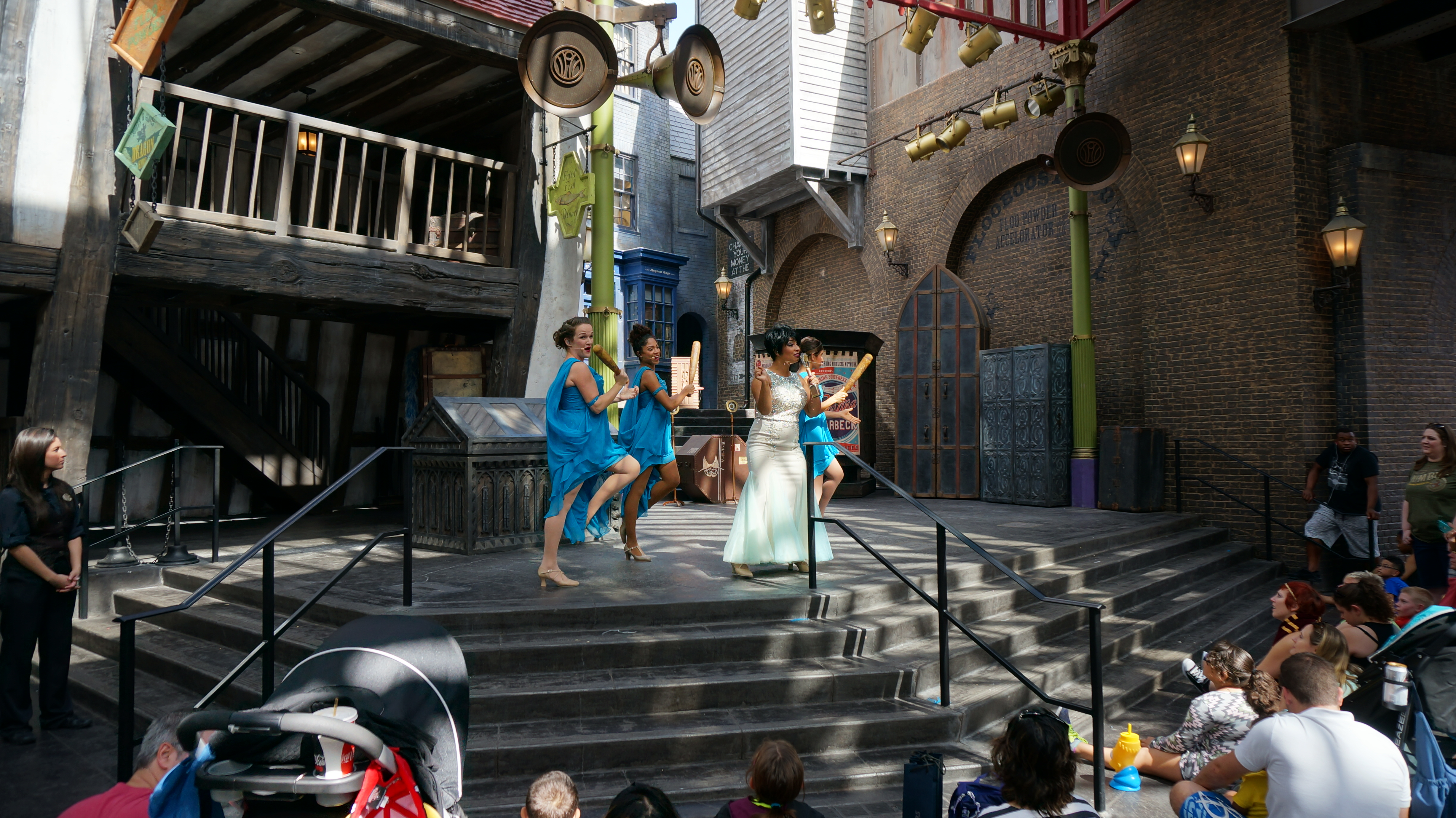 Celestina Warbeck and the Banshees at Universal Studios Florida.

I noticed that Shutterbuttons Photography Studio has been relocated next to Madame Malkin’s Robes for All Occasions and is open for business. The former Shutterbuttons building is now vacant. 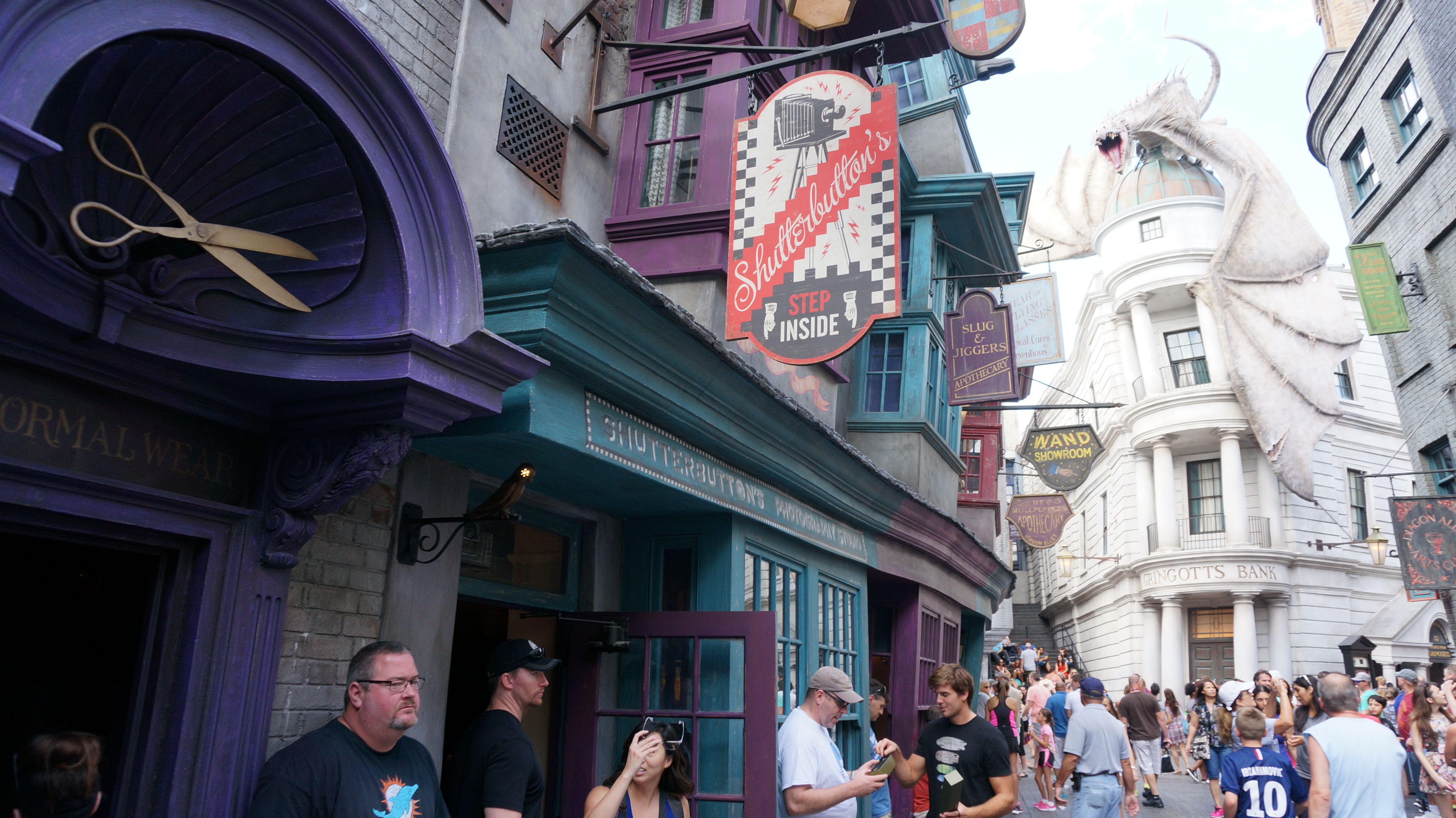 Since my plans were to visit Islands of Adventure after I finished at Universal Studios, I decided to take the Hogwarts Express over to Hogsmeade in Islands of Adventure. It’s been several months since I rode this magical train and I was excited to board via platform 9 3/4. The posted wait was 30 minutes and was an accurate reflection of my wait time. 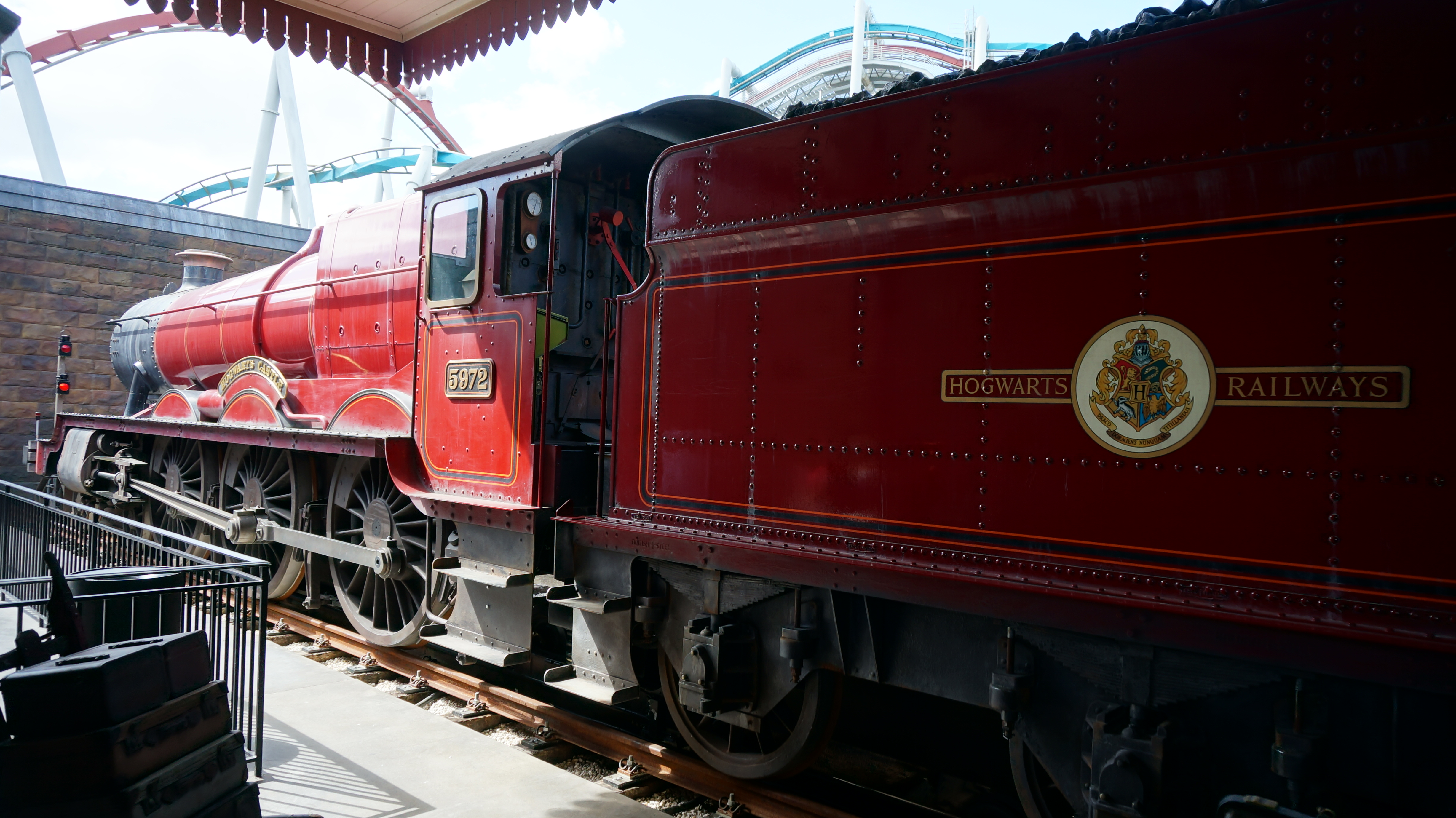 After disembarking at Hogsmeade Station, I absorbed the sights and sounds of the amazing Wizarding World of Harry Potter. This section of Islands of Adventure was busy with posted wait times for Dragon Challenge at 40 minutes and 30 minutes for both Flight of the Hippogriff and Forbidden Journey. Guests were queuing for the opportunity to purchase and taste the unique, delicious Butterbeer while other guests were partaking in the interactive wand experiences at the carefully detailed Hogsmeade storefronts. 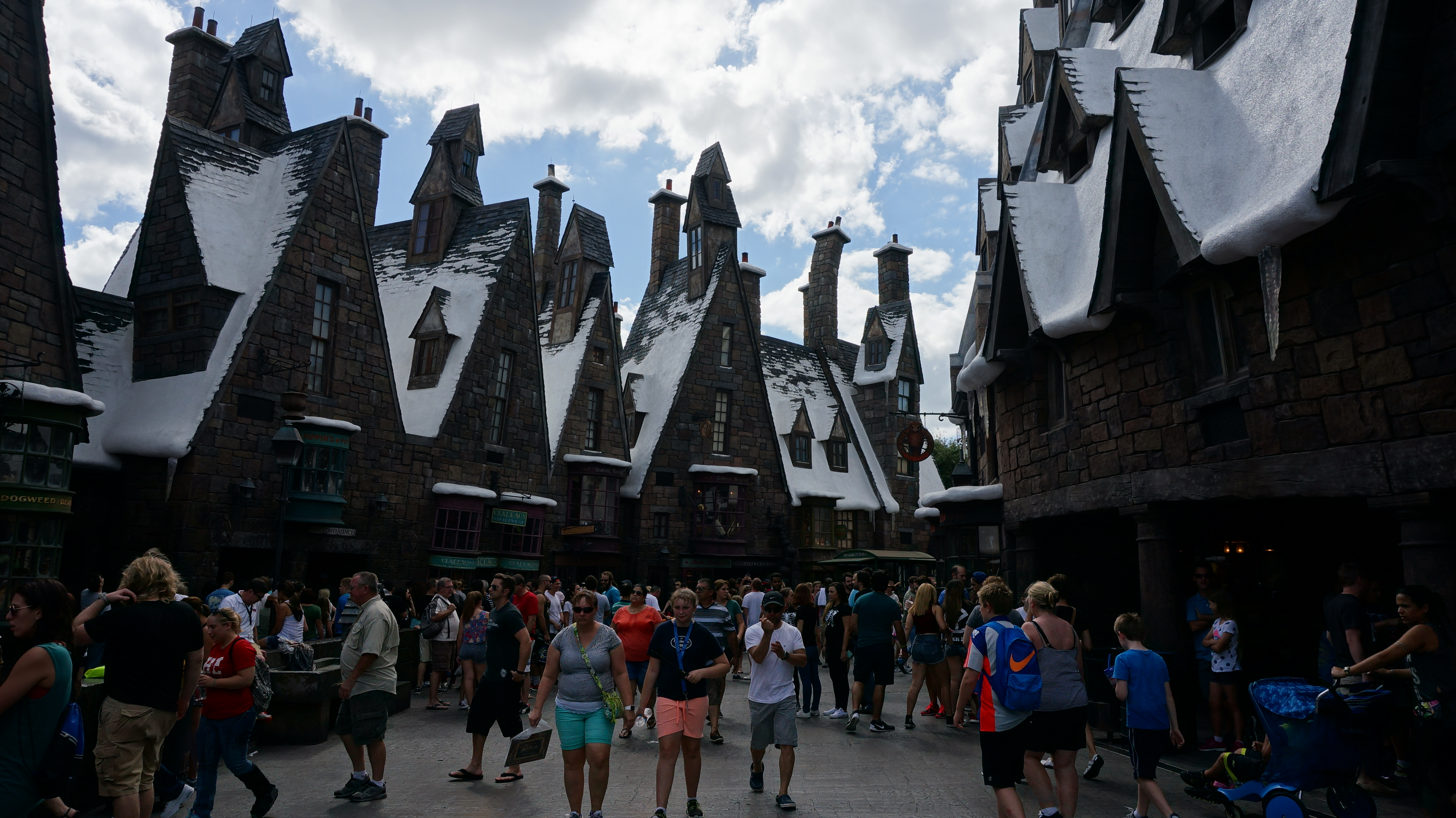 The Wizarding World of Harry Potter: Hogsmeade at Islands of Adventure.

In Jurassic Park, I waited about 25 minutes to experience the incredible Raptor Encounter. This meet and greet has been a very popular addition to Islands of Adventure and it’s not to be missed. Standing in the queue, I could see and especially hear the Raptor as she roared and was coached by her handler to pose with the guests. 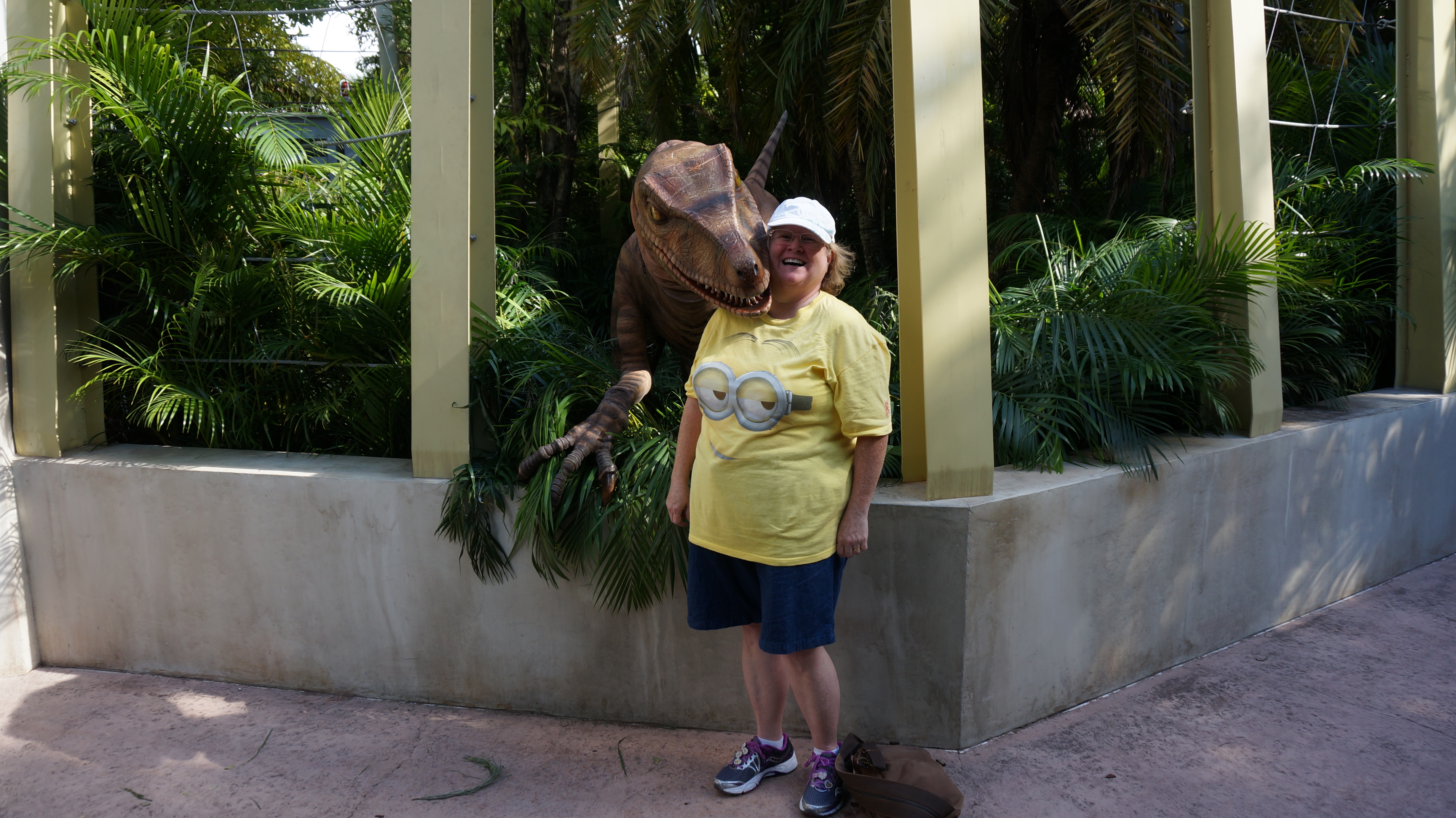 Raptor Encounter at Islands of Adventure.

The team members were very helpful and took photos of me standing with the 9 foot tall Velociraptor. After I told the Raptor she was pretty she started rubbing her face against mine! It was a hilarious yet slightly unnerving encounter and I’m glad I decided to meet her this visit. 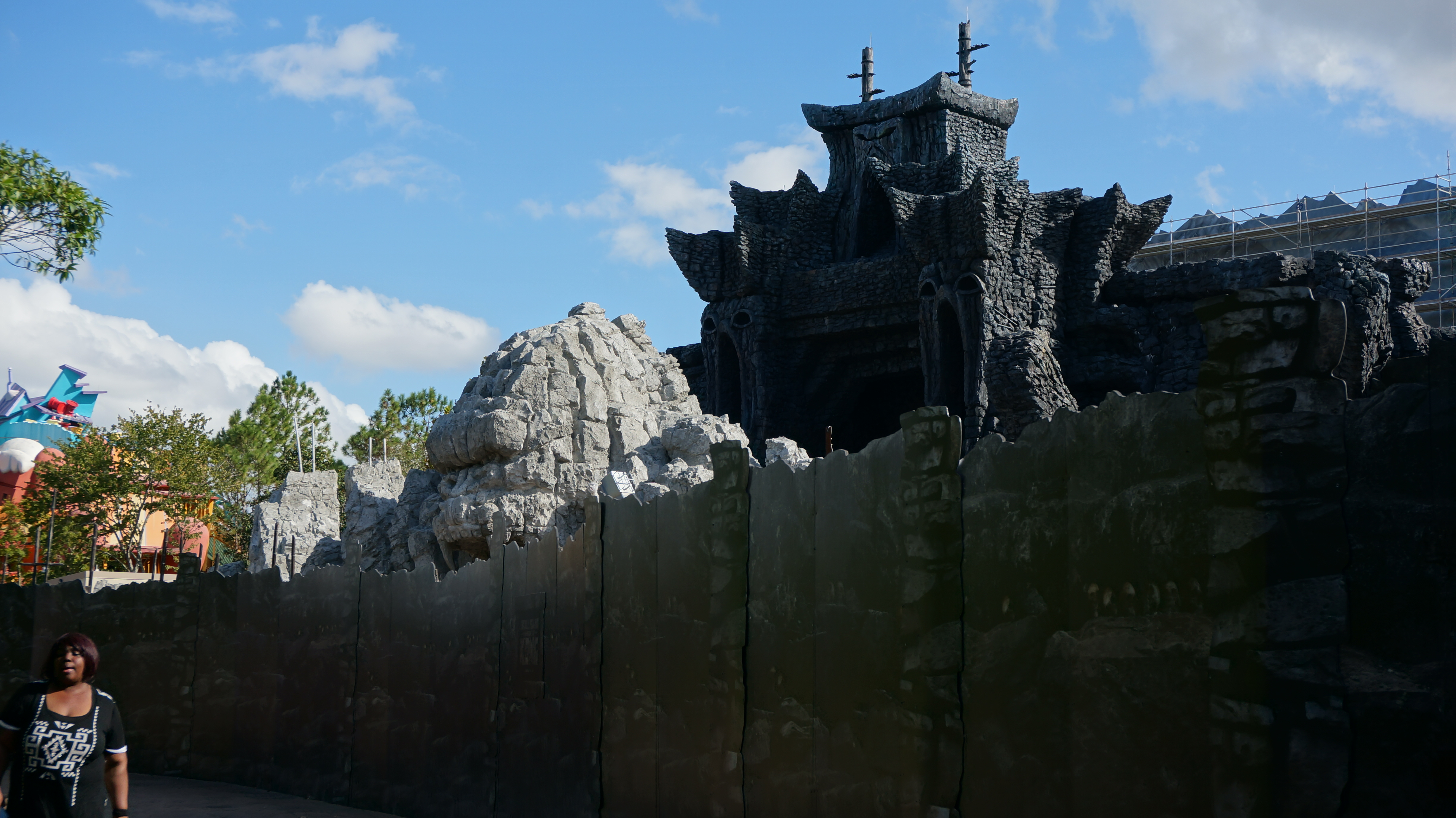 Skull Island: Reign of Kong construction at Islands of Adventure.

Construction on the new Skull Island: Reign of Kong is progressing along well. I noticed the mural backdrop of the mountains is being painted and will undoubtedly enhance the visual landscape in that part of the park. 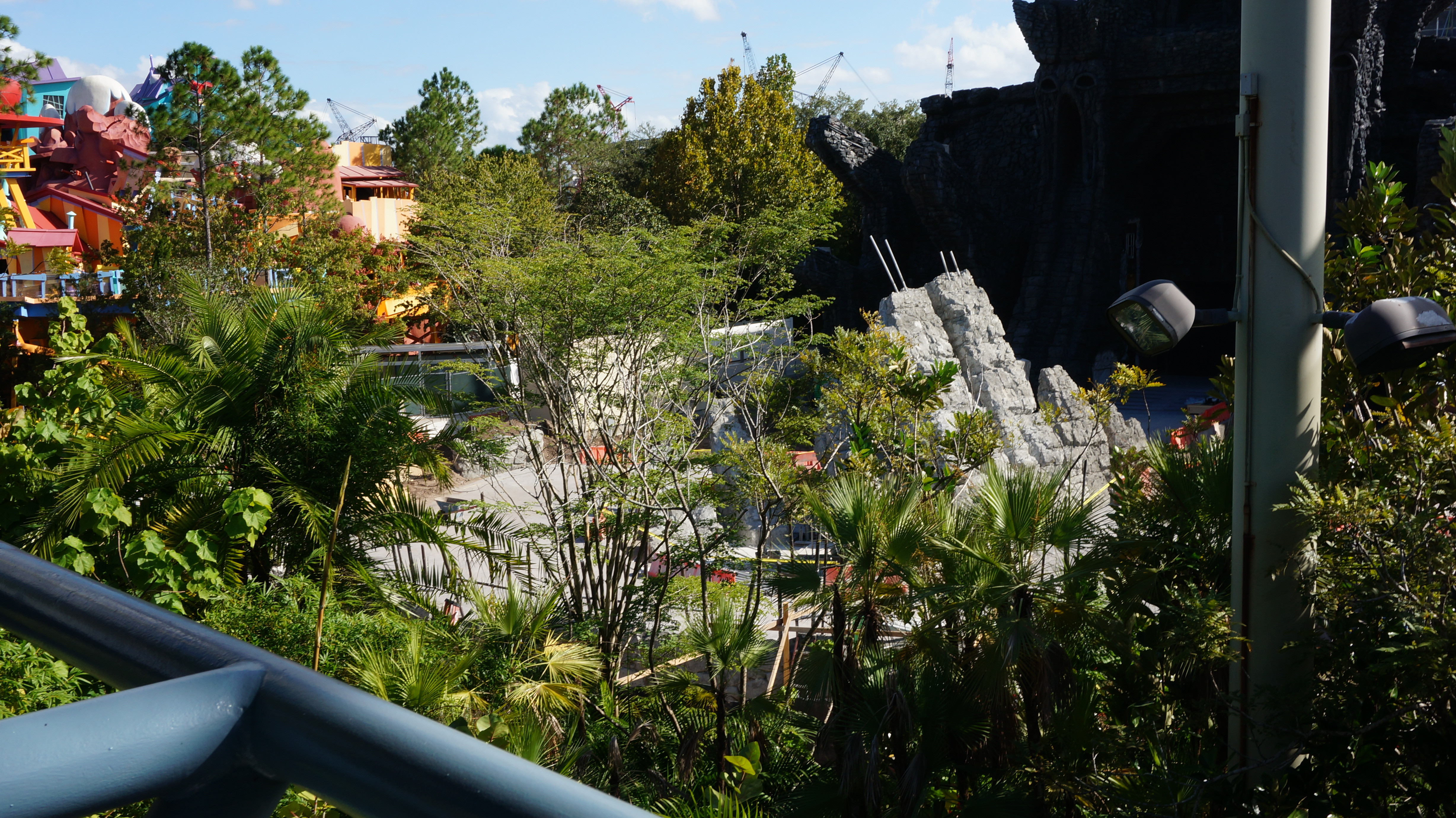 Skull Island: Reign of Kong construction at Islands of Adventure.

The remaining areas of Islands of Adventure were moderately busy with posted wait times of 35 minutes for Rip Saw Falls in Toon Lagoon, Spider-Man at 30 minutes and in Seuss Landing, Cat in the Hat at 15 minutes and the Trolley Train Ride at 30 minutes. 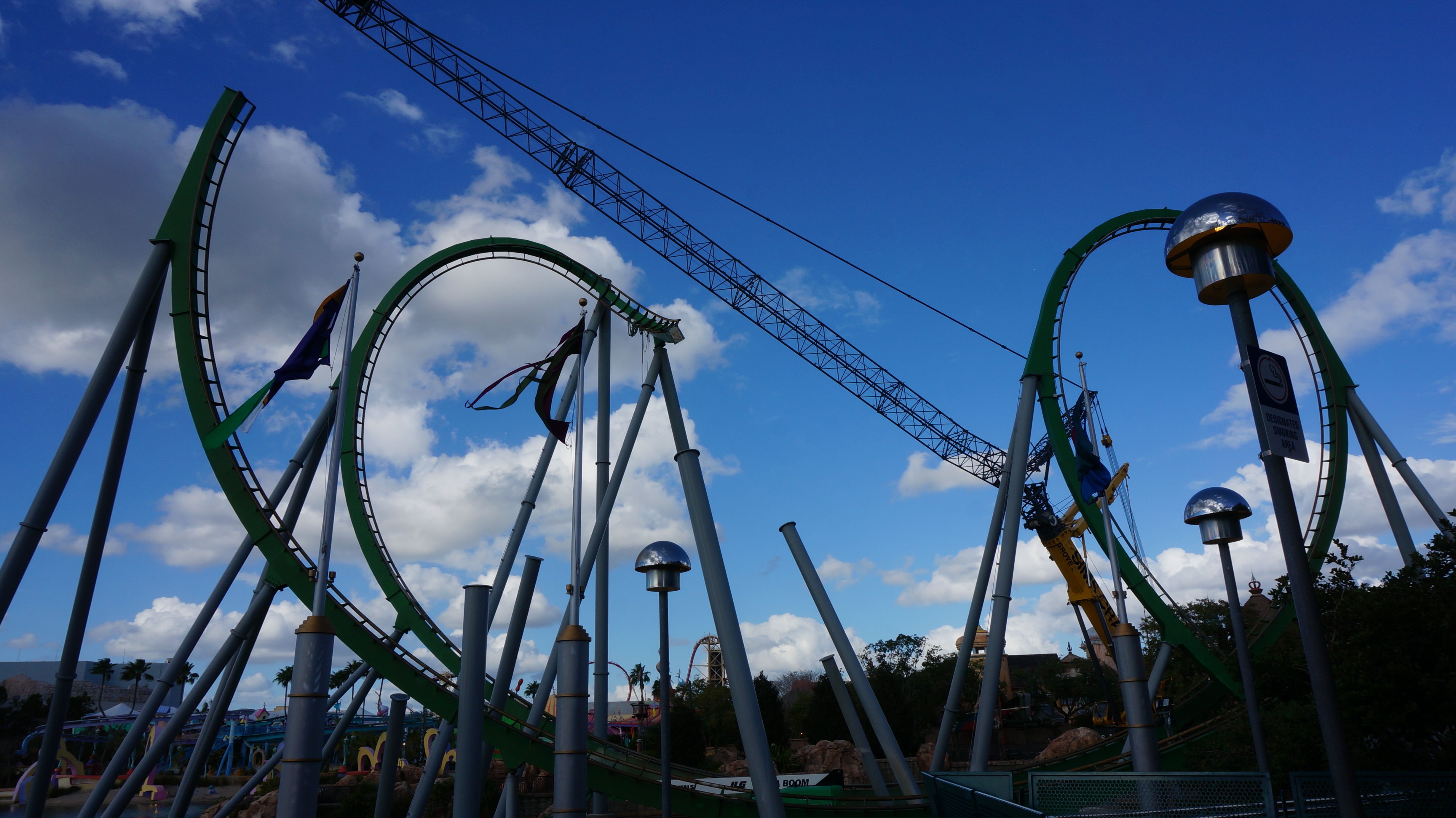 The Incredible Hulk Coaster under refurbishment at Islands of Adventure.

As part of its ongoing refurbishment, sections of The Incredible Hulk track have been removed and a large crane dominates the skyline, changing the view of the coaster from down below. It was surreal again this month walking through the front of Islands of Adventure and not hearing that roar. At least the colorful comic scenes along the construction walls are available for fans to observe and the Incredible Hulk sign on the fence lights up at night. 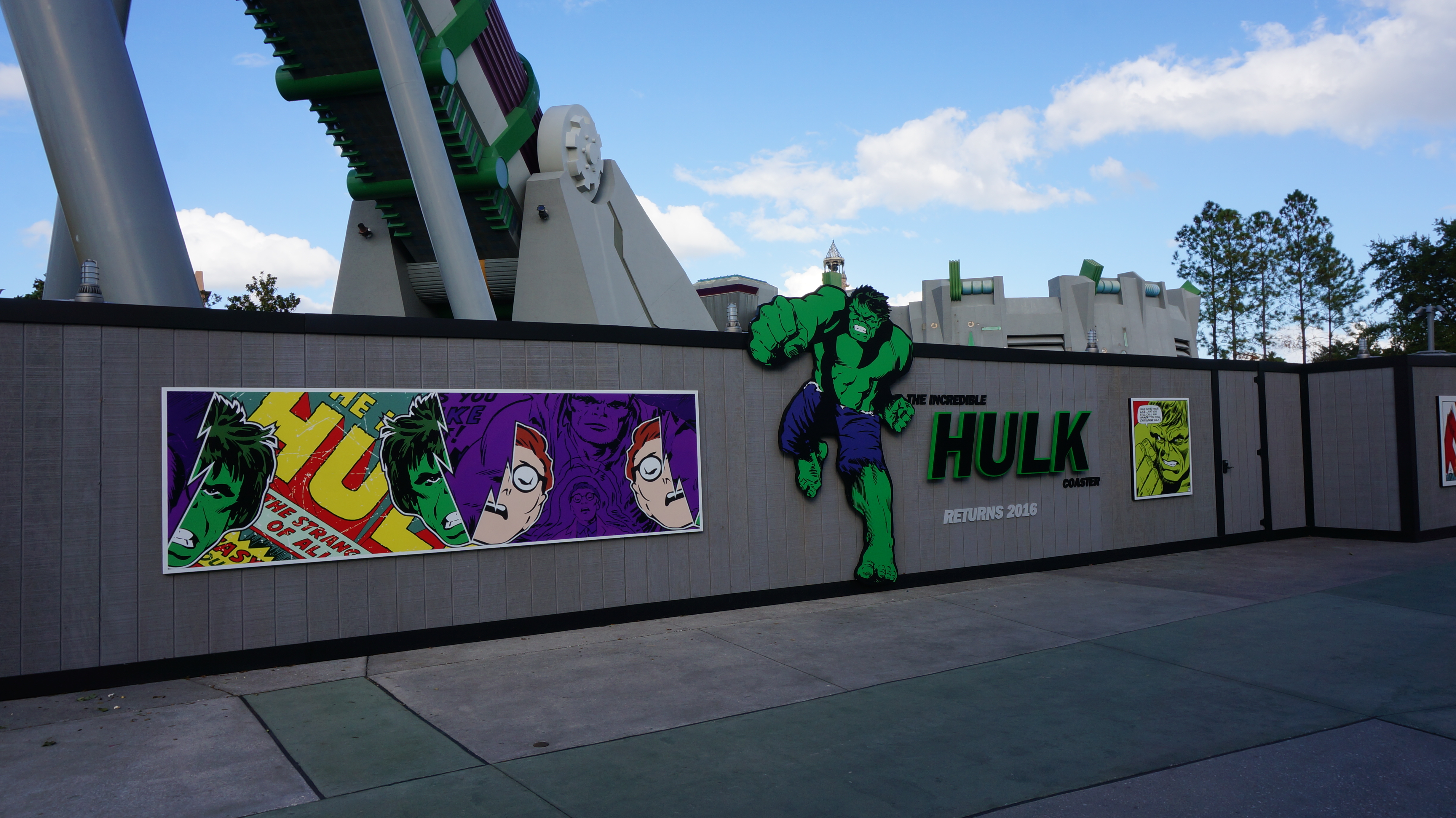 The Incredible Hulk Coaster under refurbishment at Islands of Adventure.

The most unique theme park wedding in history