Now that the cat’s officially out of the bag (read: Universal officially announced its new Volcano Bay water park yesterday morning), many fans who have been waiting for the grand reveal may be feeling a tad disappointed; the company, after all, simply released one piece of concept art and offered more in the way of a mission statement – “Imagine a place that offers radically innovative, thrilling attractions, peaceful moments of relaxation, and an inspired guest experience that will forever change the perception of water theme parks,” the press release reads – instead of actual, concrete details. (While this may be in keeping with Universal’s announcements of both The Wizarding World of Harry Potter – Diagon Alley and the more recent Skull Island: Rein of Kong, it is still something of a letdown given the sheer amount of leaked information that preceded yesterday’s debut over the course of the past few years.)

Luckily for us, however, there’s actually quite a few tidbits strategically scattered all throughout the singular piece of artwork, clues that tip Universal Creative’s hat as to what magical wonders Volcano Bay will have on hand when it opens in the summer of 2017. 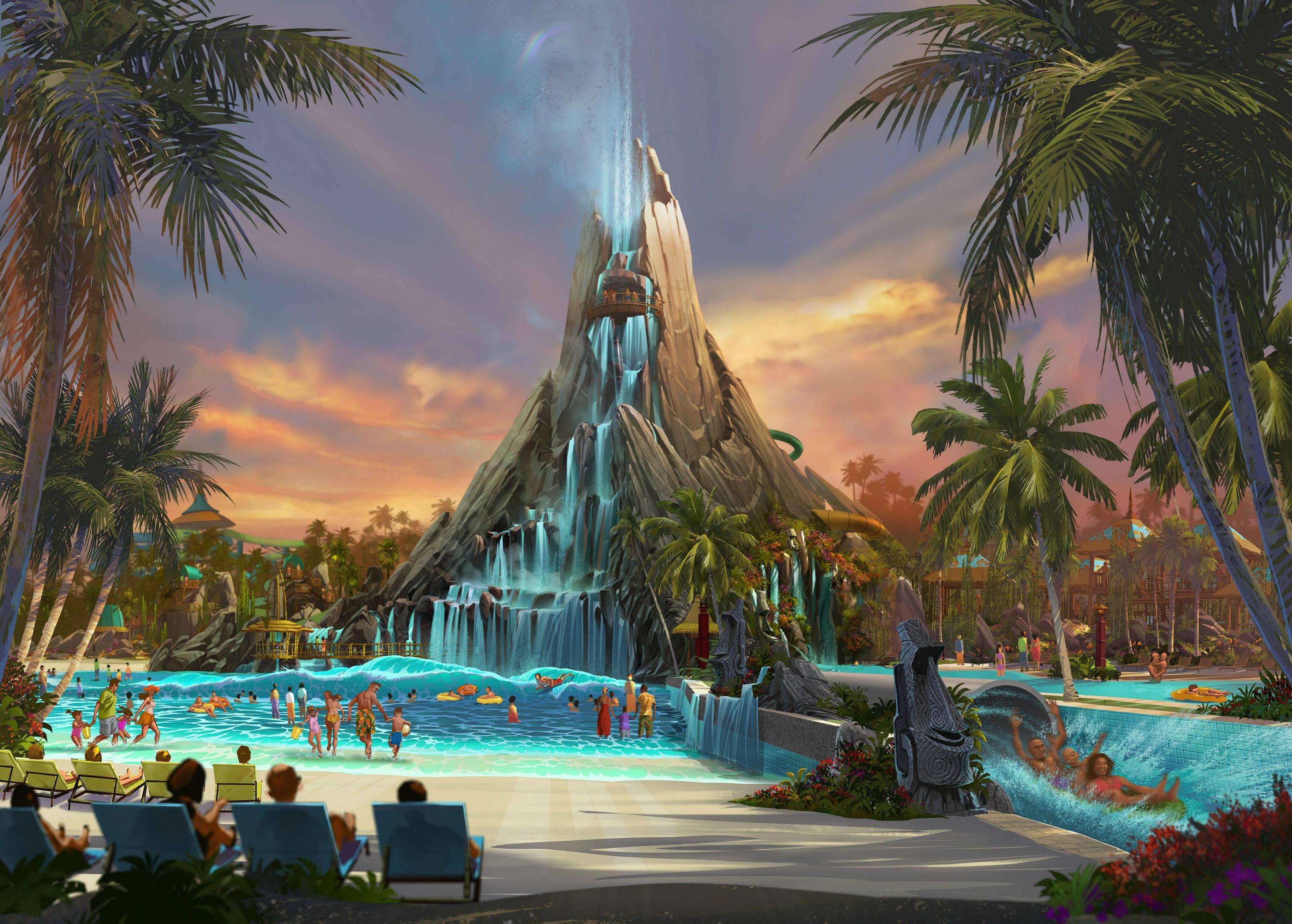 First, though, let’s get the Easter egg hidden right in the text itself out of the way: notice how Universal keeps referring to its new baby as a “water theme park”? This is more than just marketing speak – as has been previously reported, the company truly is aiming to deliver a full-day, theme park-esque experience, replete with attractions and activities that would enable guests to be occupied from dawn to dusk.

With that little morsel serving to set the stage, let’s dive into it, shall we?

One of the single coolest aspects of the promo piece, the titular volcano’s eruption has more to do with reality and less to do with artistic flourishes: not unlike Typhoon Lagoon’s Miss Tilly – the icon(ic) boat that unleashes a 50-foot geyser of water every half hour – Universal’s 200-foot central feature will have regularly scheduled eruptions. 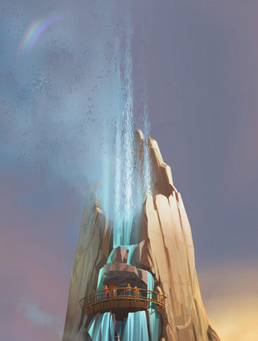 The most intriguing aspect here is just how the eruption will look at nighttime. According to several insider reports, including Teebin’s from Orlando United, Universal will light the water making its way around or through – or, in this particular case, up out of – the volcano with yellows and reds, making it look like lava. Our guess is that the regularly-occurring eruptions won’t be exempt from this impressive special effect, instantly making this one of the single coolest icons at any of the theme parks in Orlando – or beyond.

You see that observation platform featured prominently atop the volcano, just underneath its peak? That’s actually less a sightseeing destination and more the entryway for what has just become Volcano Bay’s first revealed ride: a massive, nearly 200-foot-tall water slide. 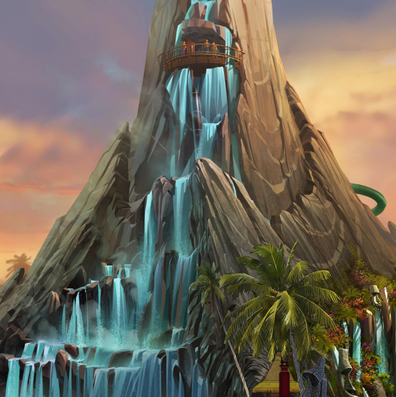 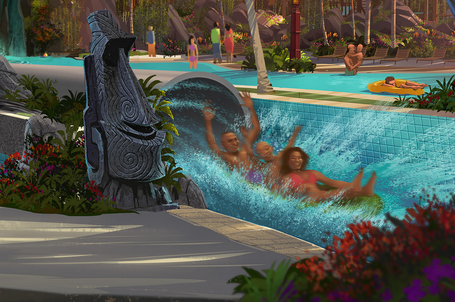 The first picture shows the slide’s clear tube making its way down from the platform and on into the innards of the mountain, while the second displays the three-man raft that guests will strap into in order to shoot the lava tube(s).

Just to put this ride into context, the tallest water slide at the moment, Verruckt at Kansas City Schlitterbahn (which just opened a year ago), stands at 168 feet and seven inches (with a second hill that is 50-feet-tall). It seems likely that Universal will be breaking this record by a good 10 feet or so, bringing the same level of thrills from its theme parks over to its first-ever water park.

(Curious just what the specifications of this slide might be? Let’s look to Verruckt for inspiration: according to Schlitterbahn’s official site, the height requirement is 54 inches, and each raft can accommodate two to three riders with a combined weight of somewhere between 400 and 550 pounds. It doesn’t sound unreasonable for Volcano Bay’s mystery ride to have comparable restrictions, particularly considering that it’s going to be using [essentially] the same ride vehicle.)

For those riders seeking a less intimidating, more traditional water slide experience, Volcano Bay’s concept art has four additional slides hiding in the background: two look to sit side-by-side off to the left-hand side of the frame (one is green while the other is blue), while the third (dark green) and fourth (yellow) ones literally peek out from behind – or from within! – the volcano. 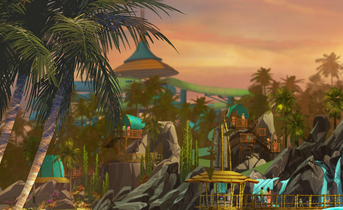 While it’s absolutely impossible to discern what kind of slides these will be (raft or traditional?), there are two important takeaways to note. First and foremost, the fact that at least two slides will be weaving their way throughout the volcano is incredibly evocative – what kind of experience will be waiting for guests inside? Will there be fully themed scenes to shoot past, or will they, not unlike Revenge of the Mummy, plunge riders into bouts of darkness?

Secondly, the fact that there are five rides within just this single view of the park bodes well for just how many attractions Volcano Bay will be loaded with, making full use of its comparatively smaller size (at just 34 acres, it’ll be little more than half the size of either Typhon Lagoon or Blizzard Beach).

It’s starting to become easier and easier to see how Universal is promising a full-day experience with this park.

The water that cascades down the face of Volcano Bay’s mountainous icon looks to do more than just be an impressive touch of theming (particularly at night): it also is feeding the seemingly-mandatory wave pool to the left-hand side of the massive water slide’s exit. (It may also be pulling triple duty, if the walkway that seems to work its way through the various waterfalls in the background is any indication.)

Off to the right-hand side of the artwork, meanwhile, sits another water-park staple – the lazy river. And least these everyday features sound a little too pedestrian, the fact that rumors have consistently been pointing to the lazy river also working its way through the volcano for at least part of its circuit should instantly elevate your excitement level.

Beyond the impeccable Tiki theming and copious amounts of slides, pools, and other assorted aquatic features, there is one final type of structure hidden in the concept art, and this is just as vital to the park’s vitality – and viability – as are its rides.

Off to the very leftmost side of the picture, beyond the water slides and partially obstructed by a palm tree, is a green building that looks suspiciously like a cabana, the ubiquitous amenity that serves as a pool lounger’s home-away-from-home, containing such necessities as a ceiling fan, flat-panel television, refrigerator, outlets, and, of course, a personal server. The ones at the various on-site hotels cost anywhere from $80 to $100 per day, though it wouldn’t be surprising to see Universal charge more at the water park – if, indeed, they are even coming to Volcano Bay. 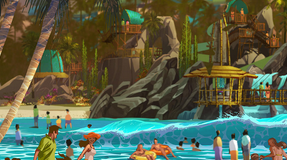 Off to the extreme right is actually the most mysterious element of the entire piece of artwork: a covered building – or, indeed, series of buildings – replete with people standing on its raised platforms. There are so many different possibilities for what this structure can be (a restaurant? Observation deck? Larger-scale cabanas? Private bungalows, like the recent ones that debuted at Disney’s Polynesian Village Resort? More rides?), and so little information contained within the image, it’s difficult to say what it can be with any degree of certainty whatsoever.

Oh, well. At least speculating on it gives us something to occupy ourselves with during the two-year wait for Volcano Bay’s grand opening.

Spotted any clues or tidbits that we’ve missed? Point them out in the comments below.