Welcome to THE BIG 5, a definitive top-five list of various Orlando-related, uh, stuff. THE BIG 5 is wide ranging and will run the gamut from the top five roller coasters in Orlando, to the top five gift shops at Universal, to the top five billboards on I-4, and everything in between.

This week’s list is the Top Five Secrets of Disney’s Art of Animation Resort. Back in 2003, Disney created the Pop Century Resort, whose theme revolved around all the different decades in the 20th century. Disney built buildings based around the 1950s, ‘60s, ’70s, ’80s, and ’90s and had planned to complete the project by building another set that would cover the 1900s through the 1940s. For several reasons construction of the second half of Pop Century stopped, and the area stood vacant until Disney announced in 2010 that it would use this area for the new Art of Animation Resort. 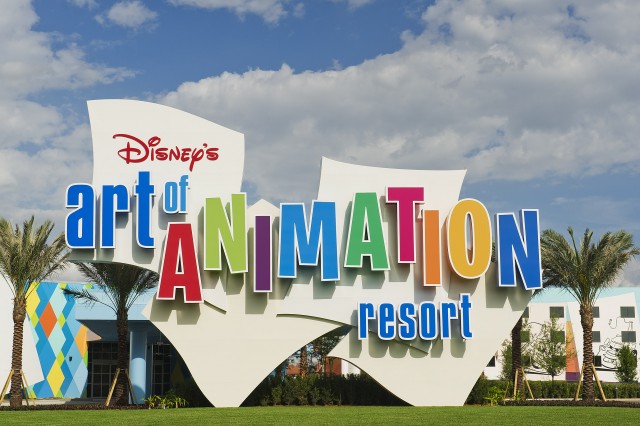 The Art of Animation property focuses on four of Disney’s most popular animated films: The Little Mermaid, Cars, Lion King, and Finding Nemo. Since one building was almost completed before Disney gave up on the Pop Century expansion, that building was converted over to Little Mermaid and has the standard Disney hotel room layout. The wings for Lion King, Cars, and Finding Nemo were built from the ground up and are the first-ever Disney “family suites” that can sleep up to six people, have two bathrooms, and a small kitchen area. Until Art of Animation, families with more than four members would have to buy two separate standard hotel rooms.

An instant hit from the day it opened on May 31, 2012, the overall theming at Art of Animation wowed guests. Disney also took a new approach to the standard check-in procedure as well as introducing a wide array of food choices in the Landscape of Flavors food court, both of which are huge improvements over what takes place in the other Disney value resorts, including Pop Century and the All Star Resorts. Having stayed at Art of Animation several times, it has quickly become my favorite place to stay on Disney property. Therefore I am proud to present my top five “secrets” you didn’t know about this amazing resort. 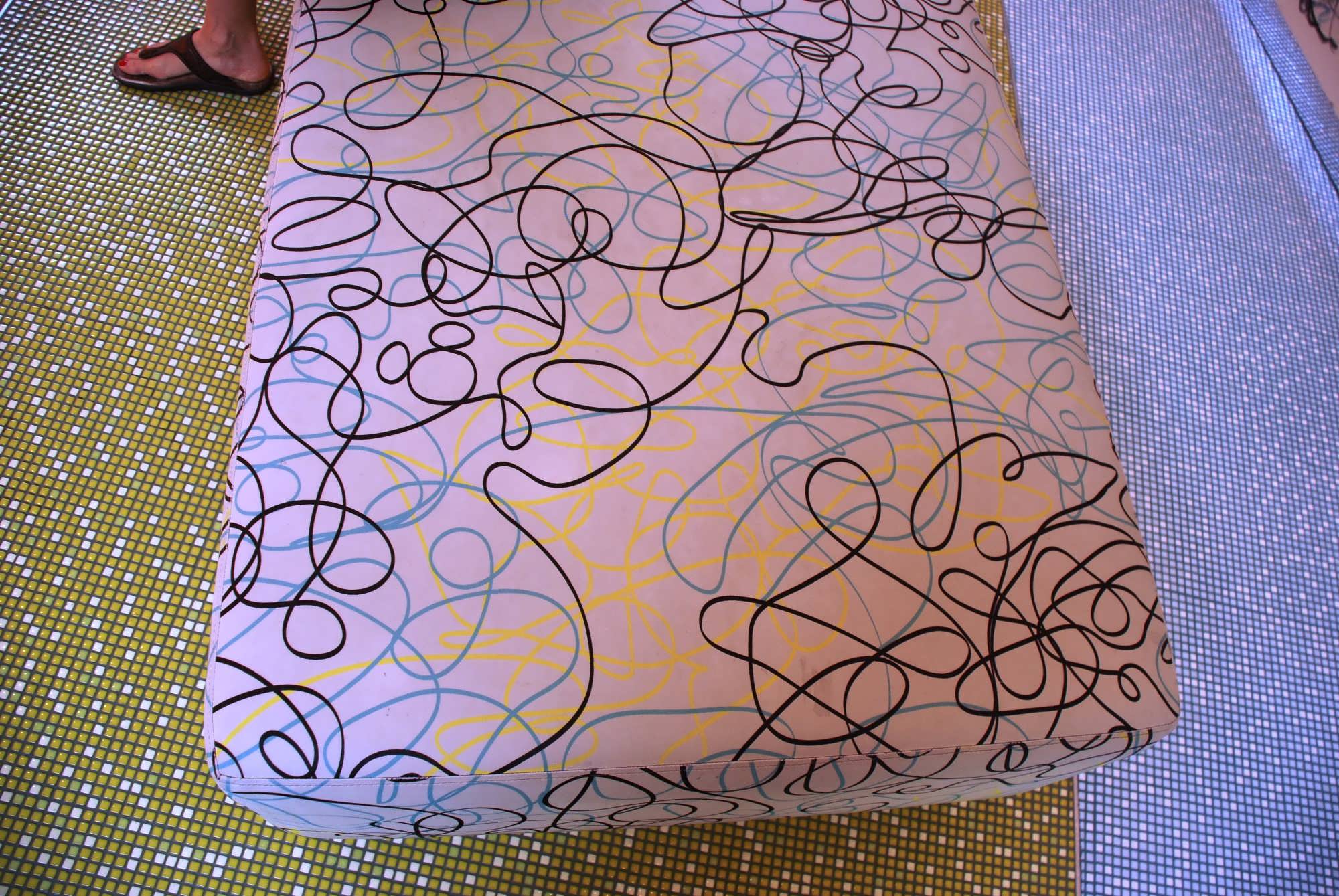 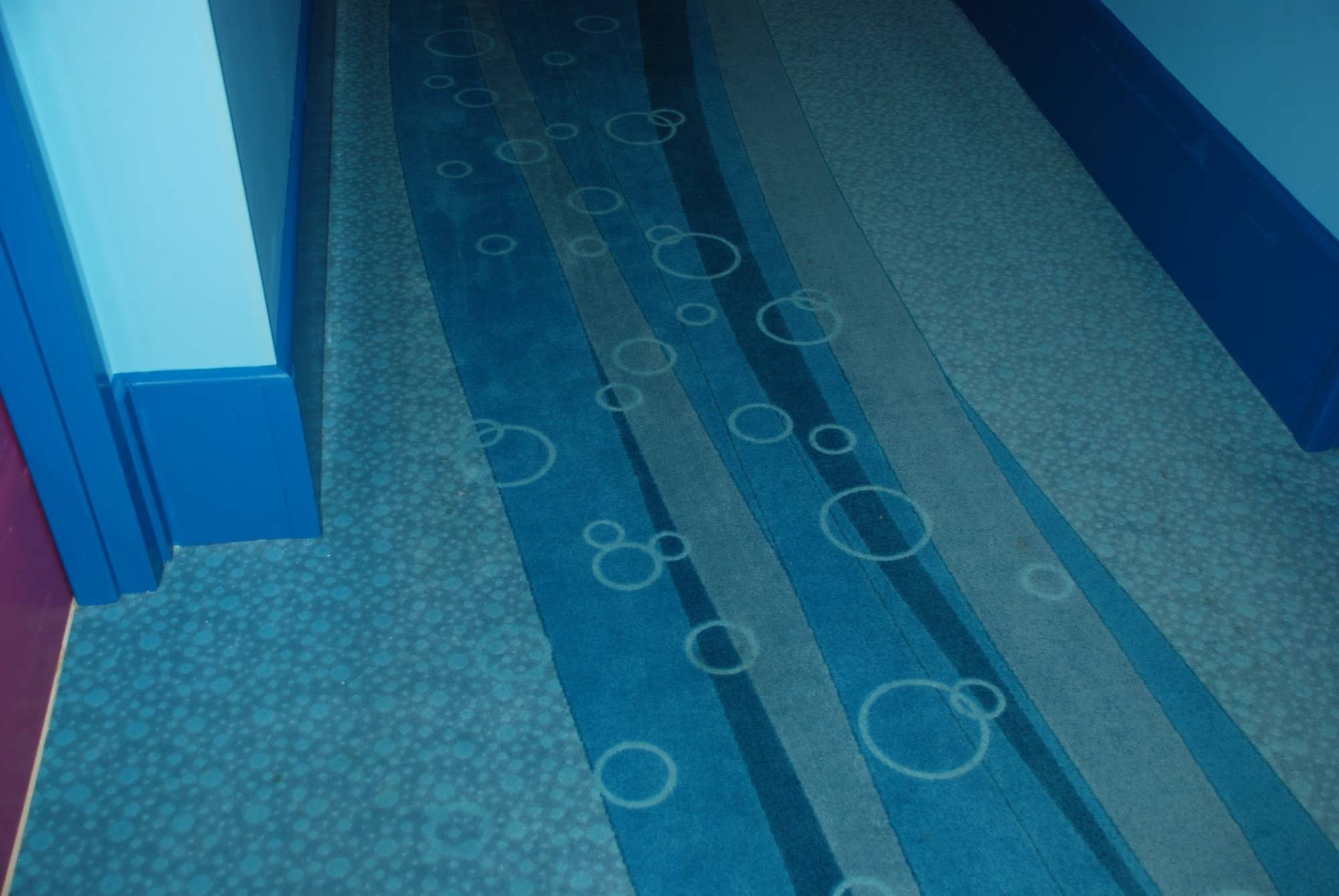 So keep your eyes open and you’ll see the iconic three circle Mickey head all around, as well as some other hidden surprises.

#4 – Discover changes made to some of your favorite films
Because Art of Animation is designed for guests to experience all aspects of creating an animated Disney film, Animation Hall gives a glimpse to how a movie can evolve over time. When you walk into the lobby, you will first see early concept work from Disney artists and gradually as you walk down the hallway the artwork becomes more and more finished until, by the end, we see the characters that we know and love today. It’s within that early concept work that we can see some real secrets. For example, we see pictures of Ursula (from Little Mermaid) and Timon (from Lion King) that look much different from the final drawings that appear in the movies. You can also see a drawing of Lightning McQueen with the number “57”… 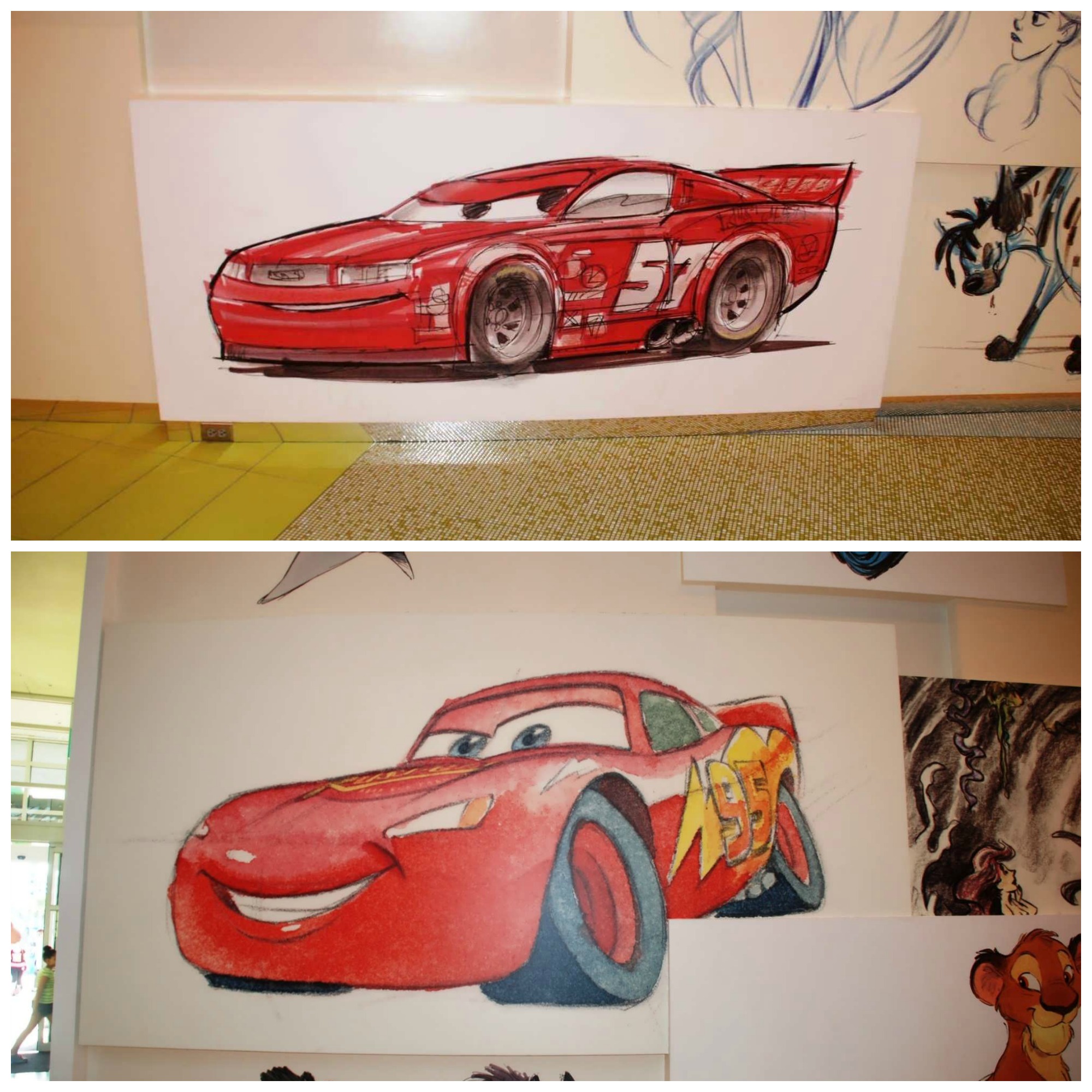 John Lasetter, the director of Cars, was born in 1957 and the number was a dedication to him. However, when Cars was released to theaters, Lightning McQueen’s number had been changed to “95,” which pays tribute to Pixar’s first hit Toy Story that came out in 1995.

#3 – You can find a little Downtown Disney at the food court
The Landscapes of Flavor food court already has the widest array of food choices at any Disney food court. The quality of food is heads and tails above any other value resort. To top it off guests even get real plates and silverware to eat with. However, the true secret here is over in the refrigerated cases: along with almost any drink and snack you can imagine, there is the opportunity to pick up a four-pack of Babycakes NYC brownie cupcakes! 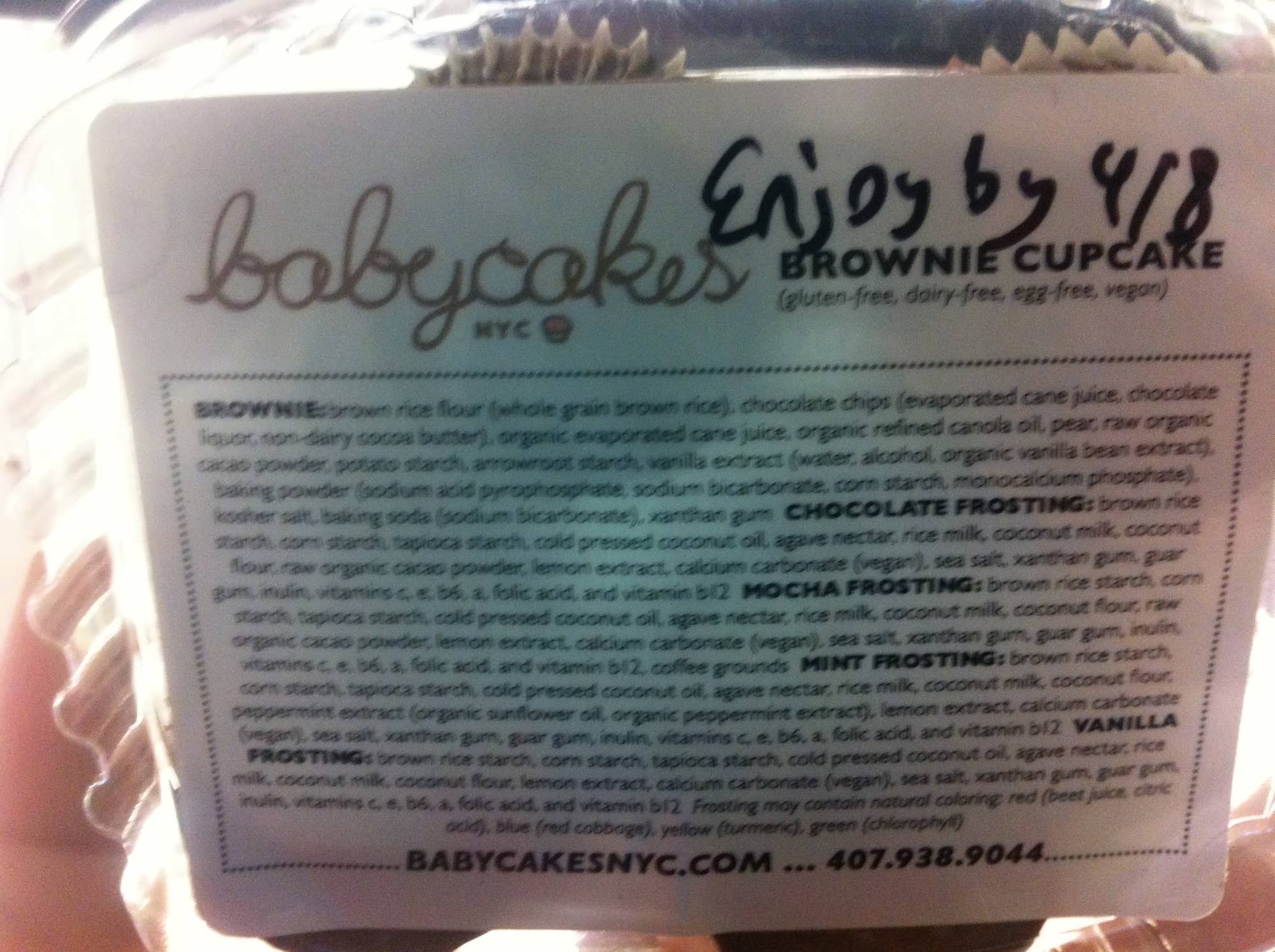 Babycakes NYC, a vegan bakery, is located at the Downtown Disney Marketplace directly next to T-Rex — for the time being, at least.

#2 – All the little details in the Cars section
Believe it or not, the section of Art of Animation that Disney has the hardest time filing up with guests is the area dedicated to the movie Cars. There could be several factors behind this: The Little Mermaid rooms are less expensive to stay in. The Lion King and Finding Nemo are two of the three highest grossing animated films of all time and more well known “brands”. The Finding Nemo area is also connected to The Big Blue Pool, the largest pool on Disney property. However, after staying in all four wings, I can say that the Cars area may be the best. Its “Cozy Cone” pool is the only one that offers cabanas (neither the Little Mermaid pool or the Big Blue Pool have them), which can be very helpful when it gets hot outside. The cabanas are free, have a small table and lounge chairs in them, and are offered on a first-come-first-served basis. 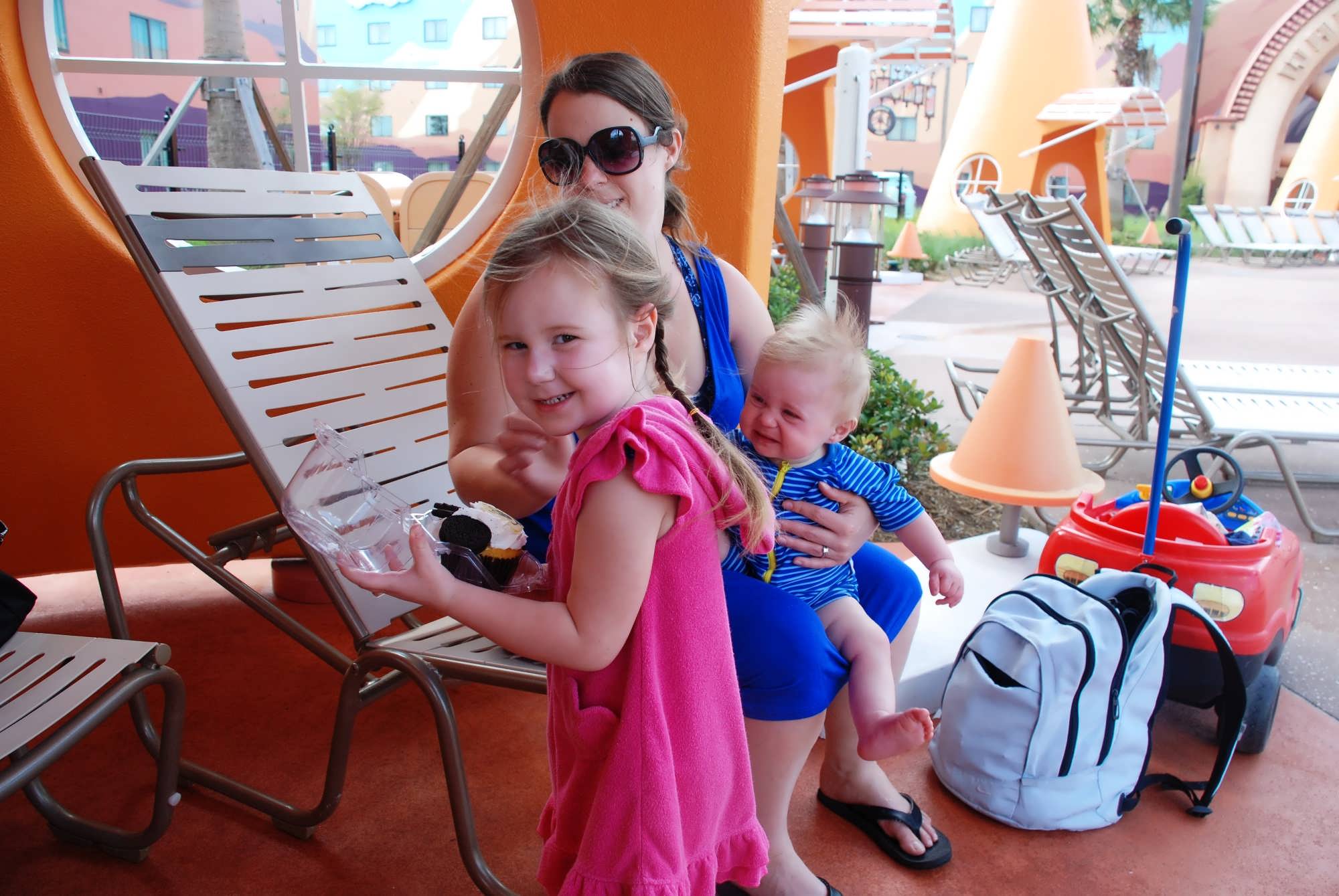 The pool also seems to be the least crowded of the three swimming areas. There are a whole bunch of photo ops to be had, including ones with every major character from the movie and in front of the stunning Wheel Well Hotel.

But the best part of the Cars area is all the little details throughout. Every guest will love taking a picture in front of the huge stack of tires next to Lugi and Guido, but how many will notice they are “Lightyear” tires, in reference to Toy Story character Buzz Lightyear? The clouds on the buildings have a hidden Lightning McQueen in them. And my personal favorite is all the little signs and knickknacks that adorn the Cozy Cone pool area. There are a whole bunch of Cars themed postcards in the front window, and signs for “Knights of Combustion” playing off the real world Knights of Columbus organization. 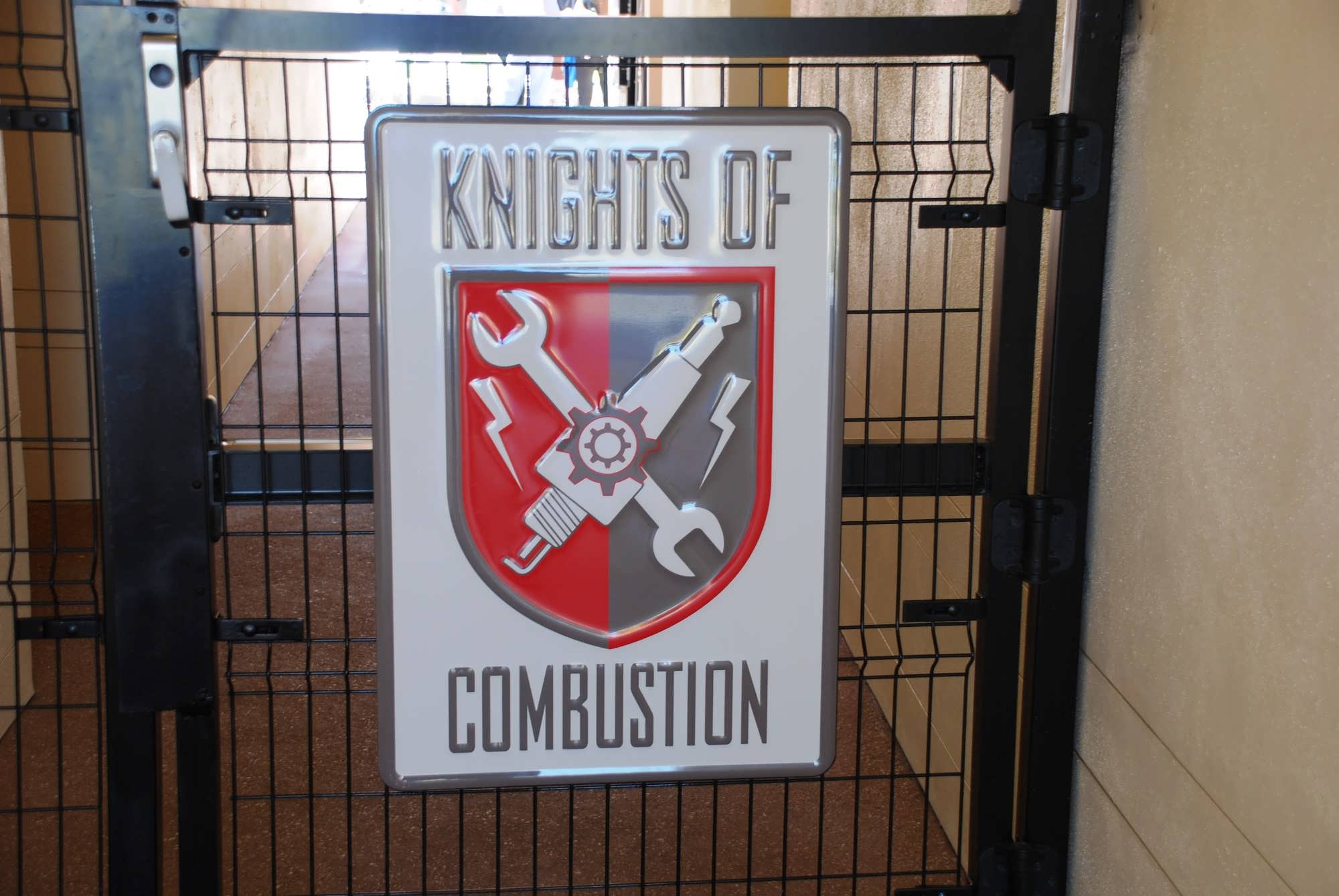 The Cars area is the most immersive and well done area on Disney property outside of New Fantasyland — it’s that good.

#1 – Sketches from some of Disney’s most famous directors in the lobby
Animation Hall, the lobby for Art of Animation, gives a deluxe feel to this value resort. While most Disney resorts have a long check-in desk where each guest is called up, Art of Animation is filled with smaller desks allowing the cast members to come out and have a much personal interaction with each family checking in. Besides the vibrant colors and artwork adorning all the walls, the highlight of Animation Hall is the incredible chandelier created by Imagineering that seems to “explode” with sketches. 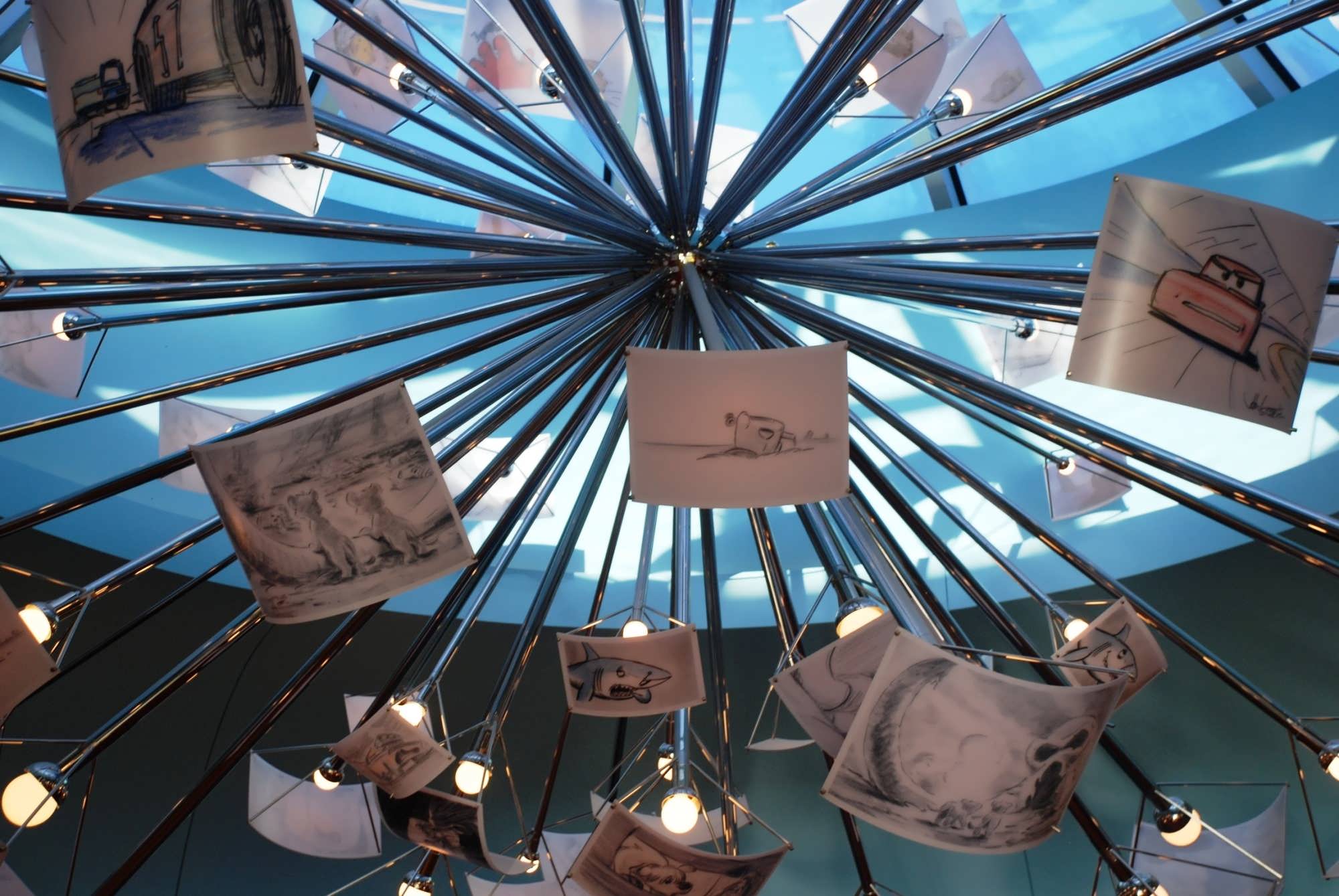 If you look closely at this chandelier you’ll see three sketches that are hand signed by four of the biggest directors in Disney animation history. Many people can spot the Cars drawing done by John Lasseter, but keep looking and you’ll also see a Finding Nemo drawing by Andrew Stanton (see it) and a Little Mermaid picture signed by Ron Clements and John Musker (see it), who were co-directors on Mermaid back in 1989. Another trivia note: Musker and Clements also co-directed the Disney film Aladdin in 1992, and can be spotted early in the movie flanking Aladdin as the suitor on the white horse comes calling for Jasmine.

What are your favorite secrets at Disney’s resorts? Share ’em below.