Top 5 reasons to get excited for Sapphire Falls Resort

Universal Orlando Resort’s array of on-site hotels is about to get a fifth entry in the form of Sapphire Falls Resort, which, it was just revealed last week, will be having its grand opening on July 14, 2016.

But that’s not all that was unveiled: Universal has started to lift the curtain and divulge more of the new resort’s amenities, theming, and other tropical-infused details. It’s enough to start to get us really excited about staying, splashing, and eating there, and it’s also enough to get us to list our points of interest like the full-on theme park nerds we are.

Not interested in the soon-to-arrive hotel? Here’s five reasons to change your mind.

Let’s get the bad news out of the way first: no, there are no complimentary Unlimited Express Passes offered when staying at Sapphire Falls, unlike its sister property, Royal Pacific Resort. And while this may seem strange at first glance – Sapphire may have a lower room rate than Royal, but it’s not low enough to get into the Express Pass-free value hotel territory – it’s actually quite understandable, from an operational standpoint; an extra 1,000 Express Passes a day would actually put a huge strain on the parks. 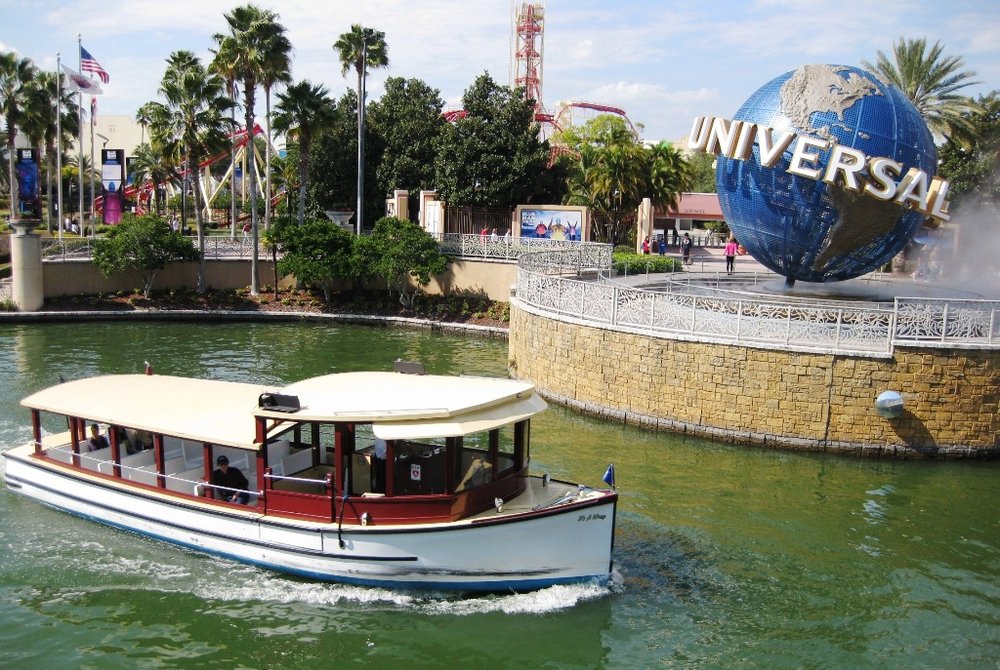 But there are a few extra benefits that have, up until now, been reserved for the three higher-end resorts. First and foremost, the nifty, time-saving water taxis will also stop at Sapphire Falls, allowing you to travel to the parks with convenience and in style (this is made all the niftier once we stop and realize that Sapphire will be the only non-“deluxe” hotel to get this feature). And then there’s the 24-hour room service and the possibility of bringing your pet along on your vacation (for an extra fee, of course).

Finally, there’s all the standard on-site perks, as well, such as Early Park Admission to The Wizarding World of Harry Potter, the delivery of merchandise to your hotel room, and character appearances, probably in the form of breakfasts on select days.

That sounds like a pretty good balancing act between the premier and prime value resorts to us.

Universal’s on-site resorts are, not to put too fine a point on it, gorgeously detailed. It’s easy to let it all slip past you – since Universal’s real-word theming is significantly more subtle than what you can find over at Walt Disney World Resort, with its heavy infusion of characters from Cars, The Little Mermaid, and a whole gamut of its other films – but Sapphire Falls Resort looks to change all that: with a giant waterfall that feeds into an even bigger lagoon, a massive pool, and hotel rooms that scream tropical fun, it’ll be hard to miss all the thematic touches that build up to create a Caribbean getaway. 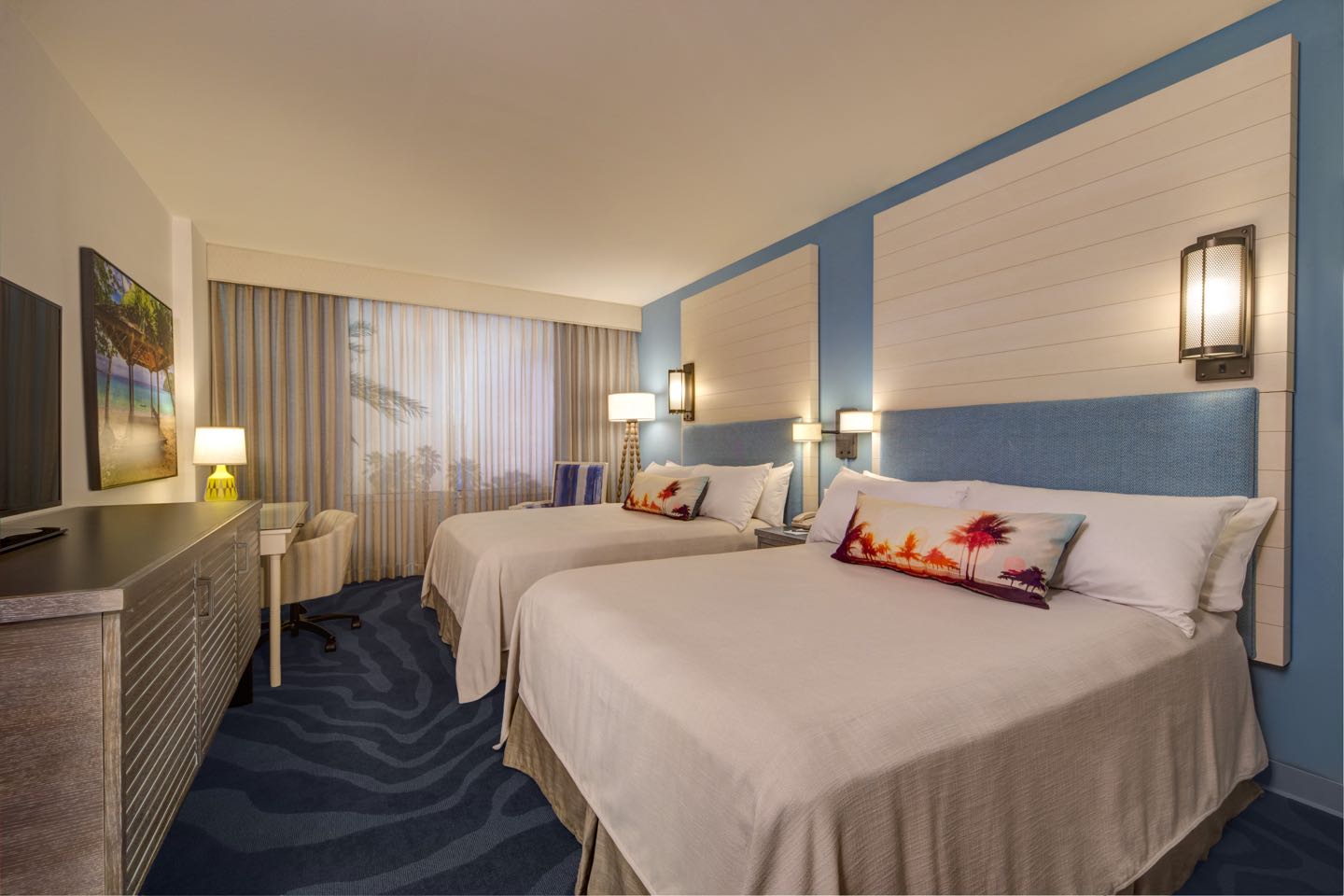 Beyond all the “stone ruins, sandy beaches, waterfalls, and uniquely-themed dining experiences,” however, there are a couple of smaller elements that already stand out in all the descriptions and early concept art. “Reclaimed” wood will be used throughout the building in an effort to give the impression that an island mansion was “beautifully restored into a breathtaking resort hotel” – is it just me, or are there certain Hard Rock Hotel overtones here? – and, even more majestically, there will be a four-story stone turret located in the lobby. 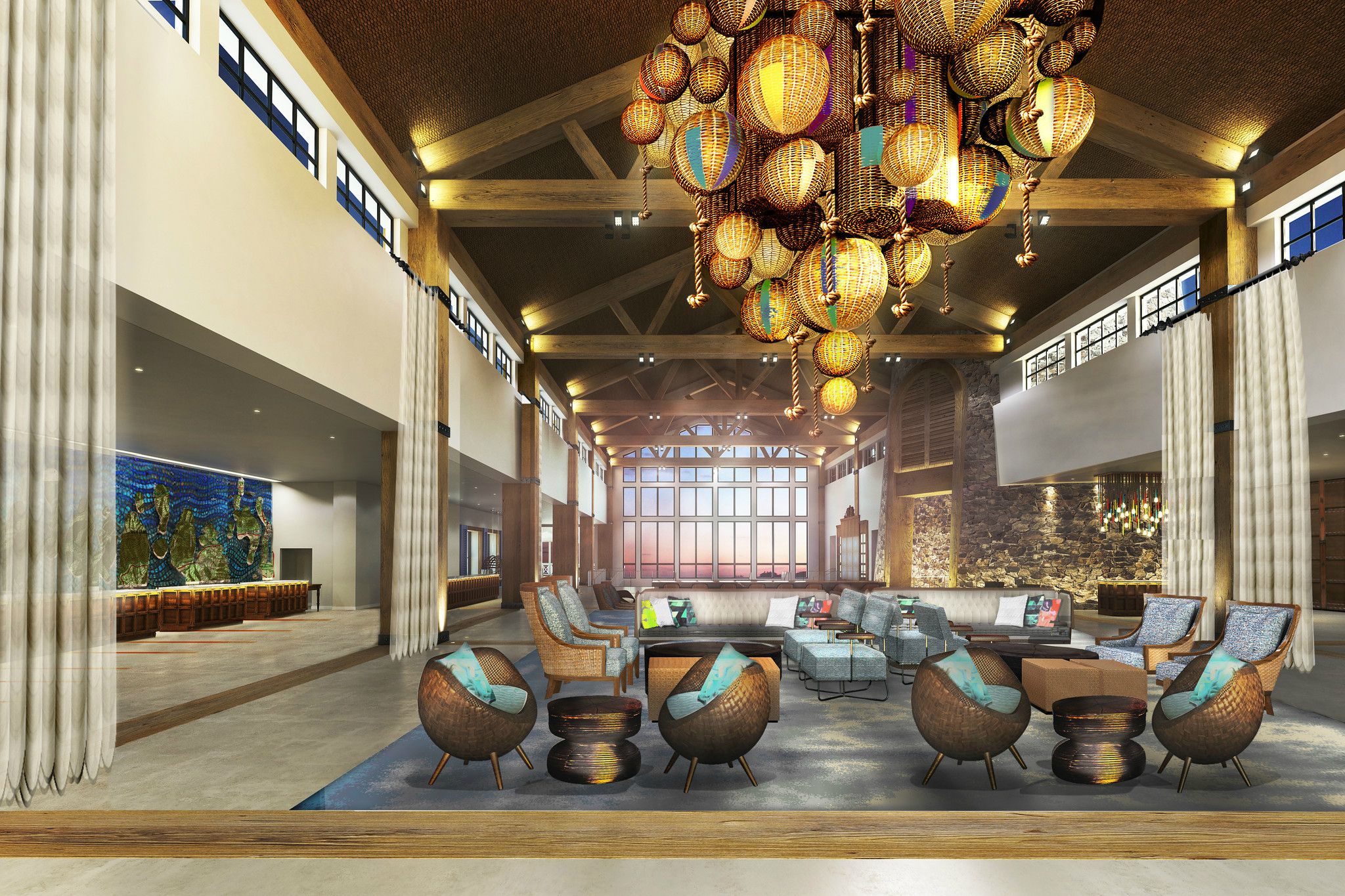 We can’t wait to experience it all for ourselves.

Here’s where things start to get really exciting.

Royal Pacific Resort used to be able to boast that its pool was the largest in the city of Orlando, but now its sister property will be swiping the title. And in case 16,000 square feet just isn’t enough for you, there’s also two white sand beaches, a children’s play area with pop-up jets, a water slide, a “massive” fire pit (for making S’mores, but of course), and Universal’s ubiquitous cabanas. 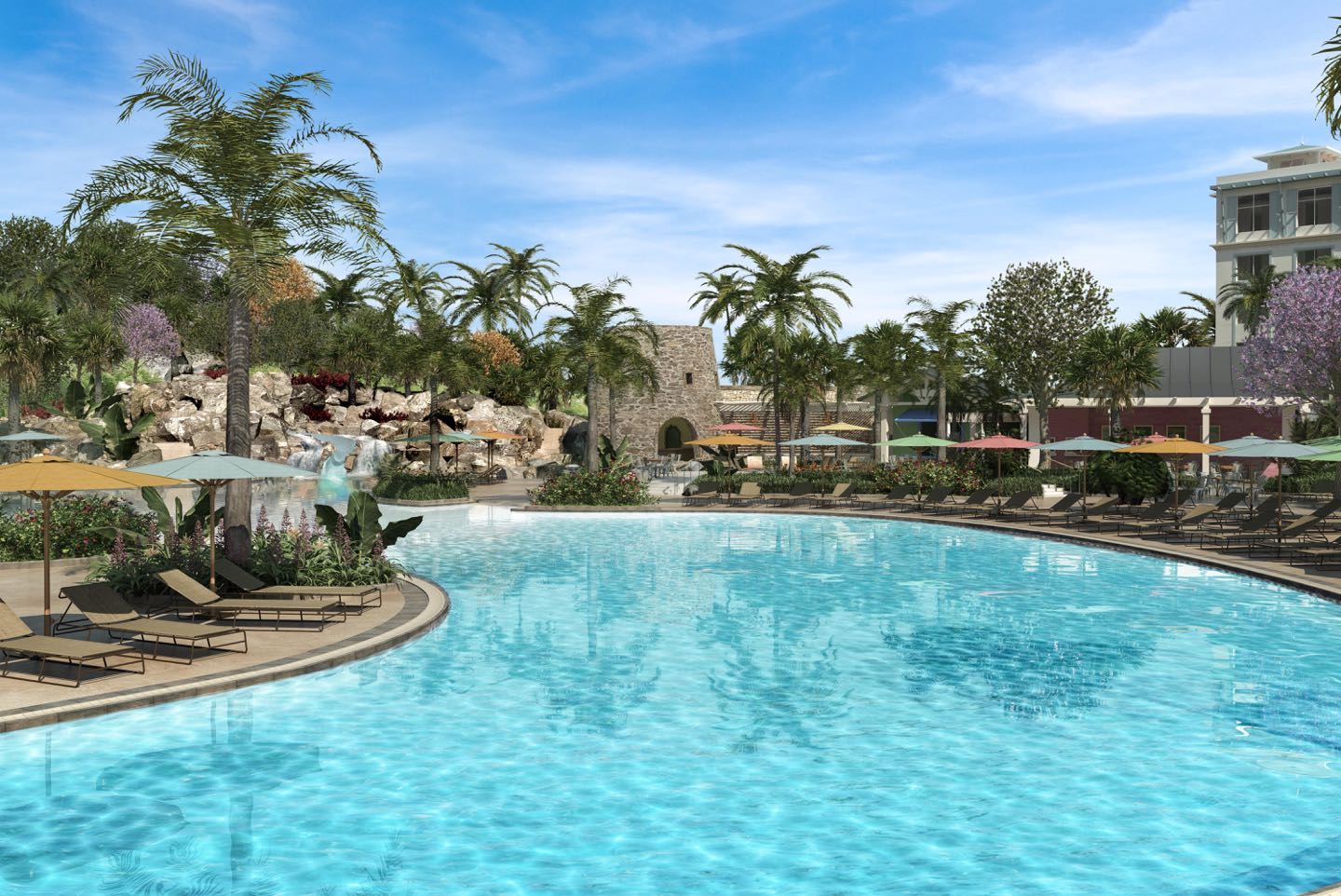 The only downside here? Universal has yet to release any photos or, even, concept art of the pool area’s many splendid features (all we’ve got thus far is the sole overview rendering above). Still, there’s more than enough to get our imaginations soaring – Portofino Bay Hotel’s water slide, for instance, is a clever play off of ancient Roman aqueducts, and Cabana Bay Beach Resort‘s doubles as a fantastic retro-‘60s water tower. There’s no telling what kinds of fun Universal will have with the Caribbean theme in this department – particularly since it’s already knocked the poolside bar concept out of the park here (no pun intended).

Universal has made a recent habit out of taking rather basic-sounding food and beverage premises and adding a certain spin on them, making them more than what anyone imagined when first hearing of the concept. NBC Sports Grill & Brew, coming to CityWalk later this year, is a perfect example: rather than simply throwing together the standard sports bar, Universal has amassed a large menu, including a selection of over 100 beers, making that sporting event that much more exciting.

The Caribbean-inspired fare to be found at Sapphire Falls’s four dining establishments look to be the icing on this newfound culinary cake. Drhum Club Kantine will not only serve the standard assortment of poolside drinks (but, of course, with a Caribbean twist), it’ll also offer up seafood, making it the only pool bar to do so (the menu is still forthcoming, but it already sounds incredibly promising). 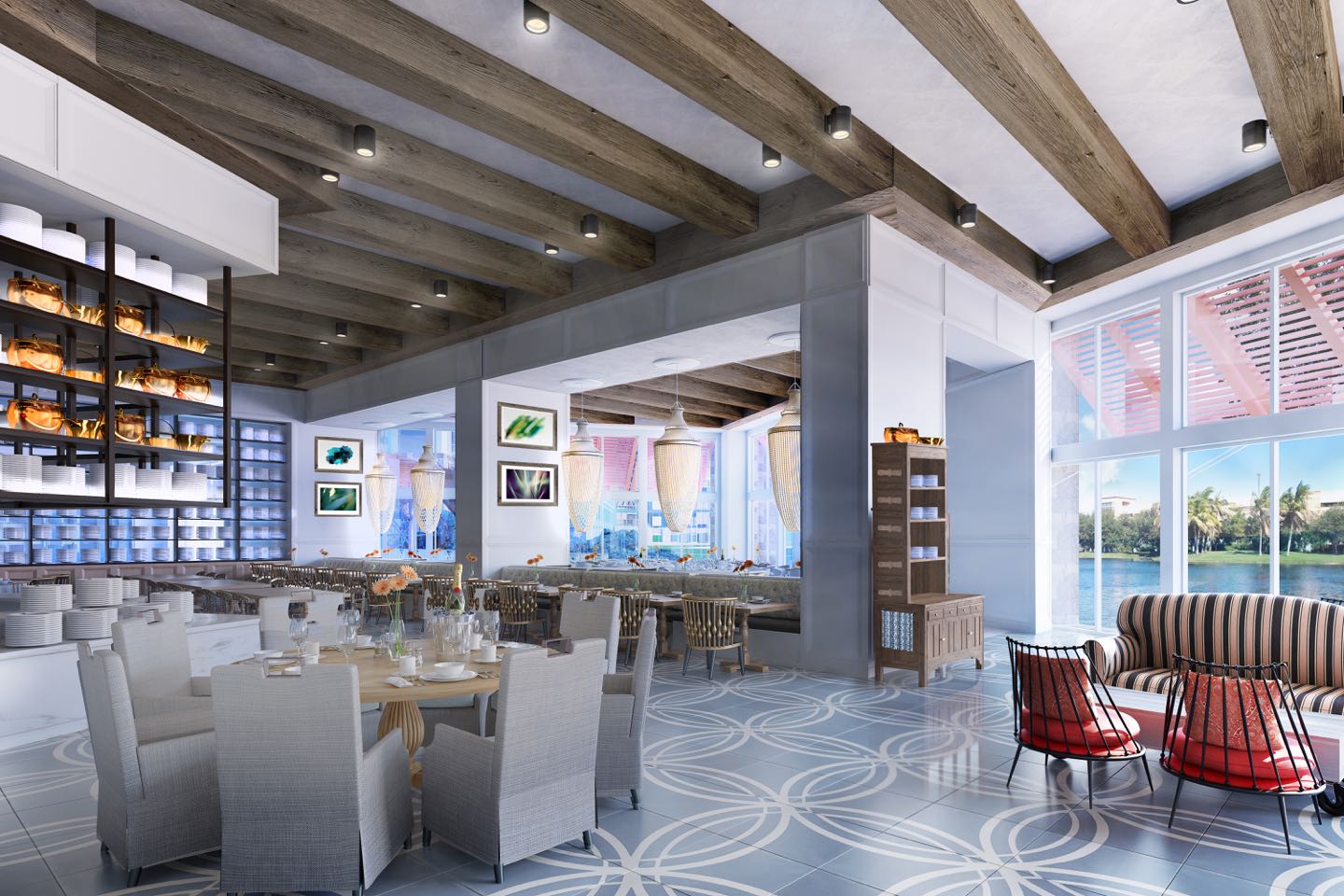 Then there’s Amatista Cookhouse, the hotel’s main restaurant, which will be located near its lobby. An open kitchen and a majestic view overlooking the resort’s already-iconic lagoon are its signature touches – our guess is that it instantly will become one of Universal Orlando Resort’s must-do restaurants, right up there alongside Mythos and Fast Food Boulevard. 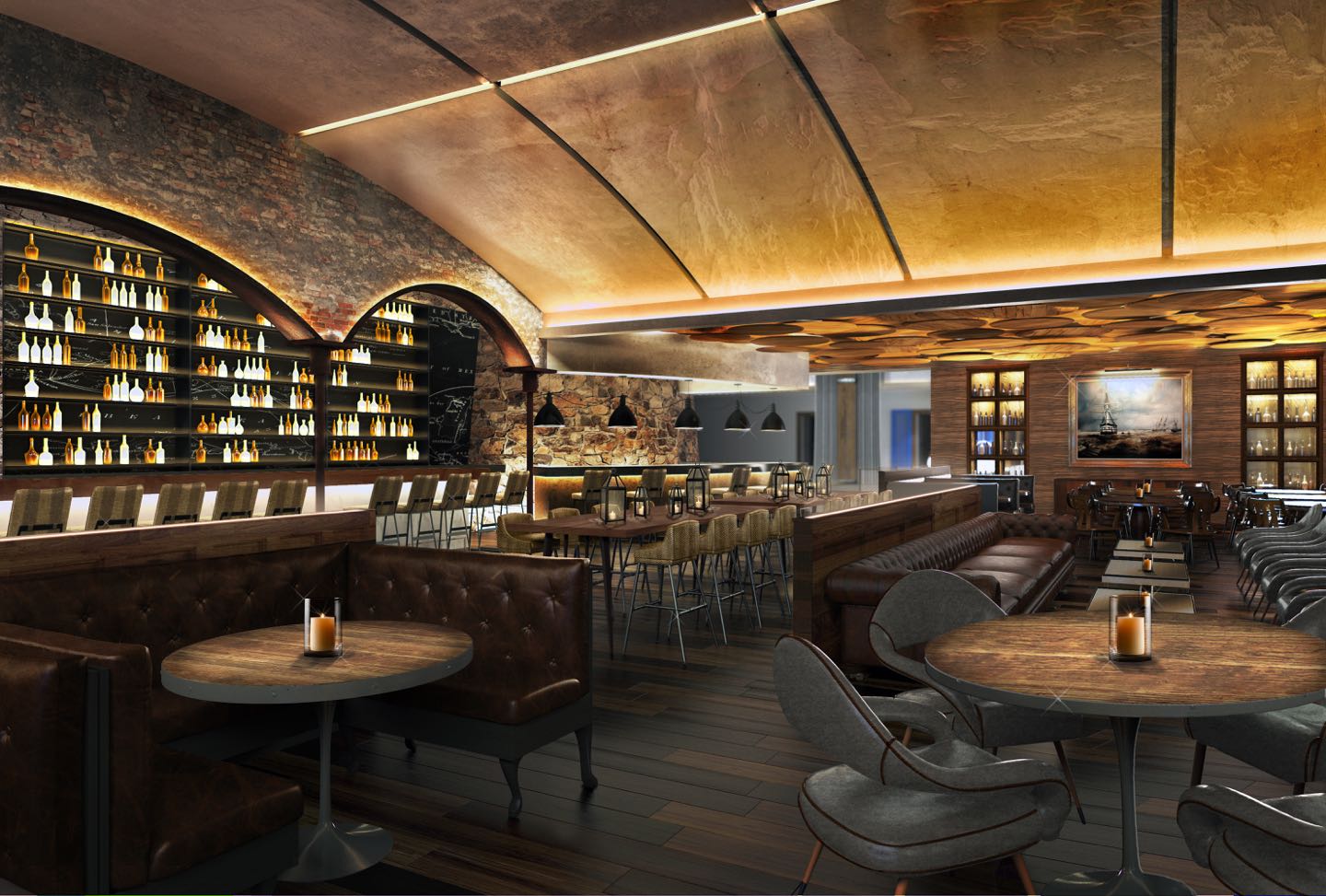 But the cream of the crop here has to be Strong Water Tavern, a bar which includes a trinity of features that are sure to be a huge draw to those who are looking for a little adventure: a wall of vintage rums, your own rum specialist, and daily rum tastings. Think of it as the hotel version of CityWalk’s Antojitos, which has one of the largest selections of tequilas in the city, if not also the state, and whose bartenders were trained by a “tequilaologist.”

This is the centerpiece of Sapphire Falls Resort, the one element that Universal is betting will define its brand-new hotel and continue to show off its post-Harry Potter design chops.

And it’s easy to see why. Roughly half of the hotel will wrap around it, presenting what are sure to be majestic views (not unlike Portofino’s balconies overlooking its own harbor – an unparalleled experience at night, which may finally be getting its first serious contender). A waterfall cascades down into it, covered by a beautiful bridge and possibly fed by Sapphire’s massive pool. And given that it’s already being billed as a major selling point for the hotel’s top-tier dining establishment, it’s sure to be the backdrop for many a memory-making vacation moment.

Is it silly to be so excited by such a detail? Yes and no. Yes, it may just be a small body of water, and, yes, it may, moreover, be suspiciously similar to Royal Pacific’s own, pontoon-plane-parked lagoon – but it’s also the embodiment of theme park design, of the ability for guests to be whisked away to a different time and place.

Next year’s Skull Island: Reign of Kong may be splashier, and the still-on-the-horizon Nintendo Land may hold more geeky potential, but Sapphire Falls Resort is already proving to be one of the most immersive corners of the ever-rapidly-changing Universal Orlando Resort.

We couldn’t be more excited – and, now, so should you.

What are your reasons for being excited about Sapphire Falls Resort? Tell us in the comments section below!

Six Vintage Universal Commercials You HAVE to See