The second rumored house for HHN 25 is…

Our super-secret friend, Unknown, in the Orlando Informer Community Forums has been continuing to tease this year’s Halloween Horror Nights lineup (and he’s even managed to keep updating the same post, just to make it easy on everyone. What a nice chap!).

His first revelation – that An American Werewolf in London is, for at least the time being, on the roster once again – was shocking enough, but it’s this second one that will really divide HHN’s wide spectrum of attendees (probably along the lines of die-hard fans and the more casual Halloween goers):

The Walking Dead is currently slated to return. Yes, for its fourth straight year. 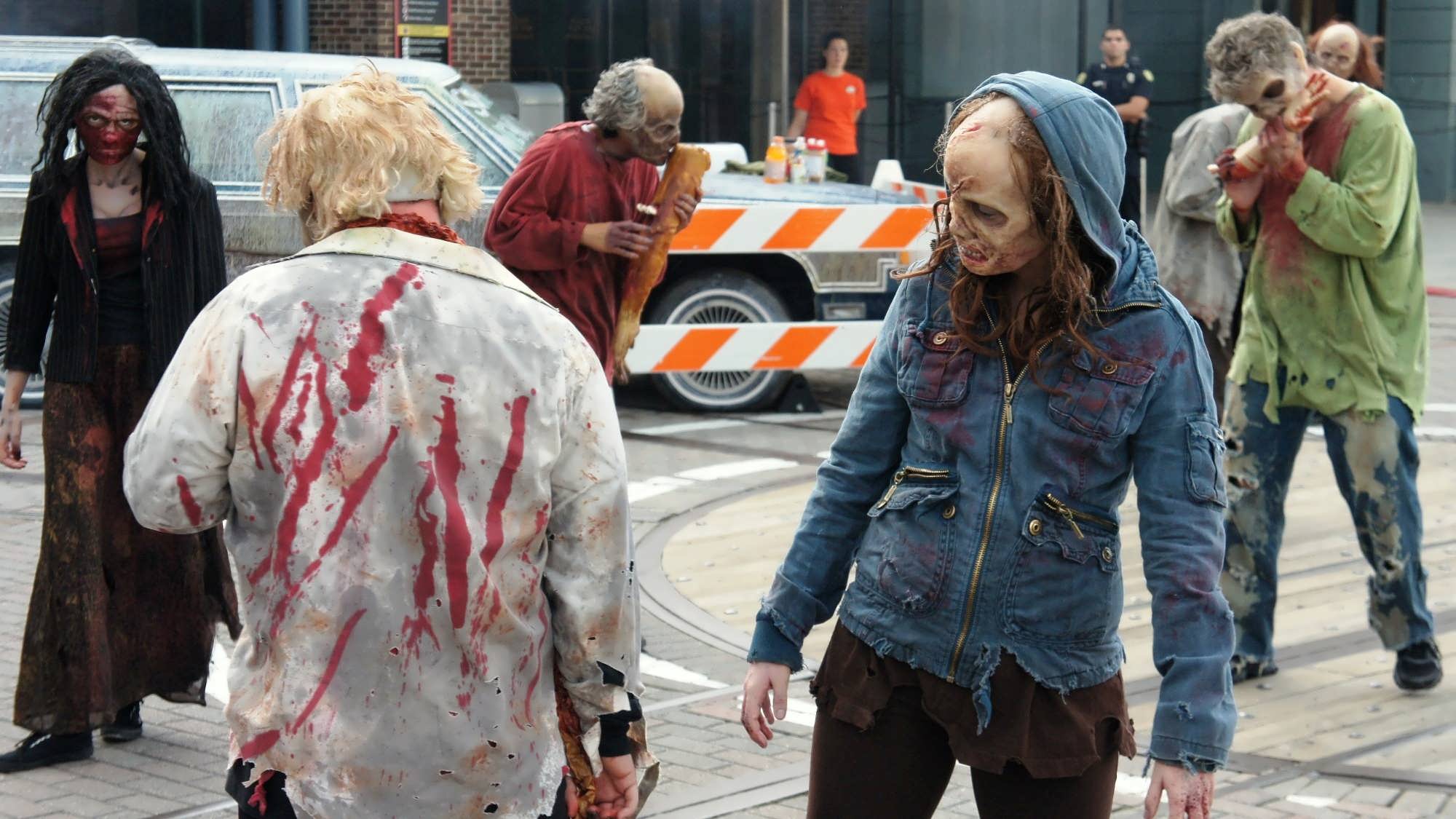 There’s obviously a lot to cover in this bombshell, so let’s take it one step at a time, yes?

The history of the Dead
After premiering to mammoth ratings success on Halloween day 2010, Universal swept in to lock down the nascent franchise for Halloween Horror Nights 2012, which kicked off just a few weeks before the show’s third season debuted, to be its headlining haunted house. Based upon the popularity the haunt enjoyed, the company negotiated The Walking Dead’s return for every single year since, with 2013’s event even taking the unprecedented step of devoting all five scare zones to the intellectual property.

And, just to be thorough, 2013’s scare zones looked a little something like this:

(All of which isn’t, of course, including Universal Studios Hollywood’s Horror Nights, which featured slightly different versions of the houses in 2013 and ’14.)

Whither 2015?
If it seems like it might be something of a stretch to have the same exact property be entering its fourth year at Halloween Horror Nights, you’re not that far off from the challenge that has been handed to Universal Art and Design, the department responsible for crafting the annual event. Yes, each season brings with it a plethora of new environments to recreate in soundstage form – Hershel’s farm, the prison, the long and treacherous road to Terminus – but there’s also a considerable amount of restrictions handed over with them, including the inability to utilize the show’s cast (besides the occasional extra, like No Safe Haven’s Penny Blake [that’s the Governor’s daughter to you], or the even rarer cameo, such as Hershel’s severed head in End of the Line).

(This subject is actually strong – and peculiar – enough to warrant a brief tangent. If the drama’s main strength lies in its actual drama, in the relationships between its diverse cast of characters as the horrors of the external world threaten to corrupt their internal ones, one may very well ask what the point of [continually] adapting it to haunted house form without its heart is; it would be like doing last year’s Halloween maze without Michael Meyers or Dracula Untold minus Vlad. Without any meat for the walkers to chew on, the houses simply become a series of jump-out-at-you boogeymen whose repetition quickly undermines the mazes’ efficacy at scaring guests.)

There just may be, however, a silver lining here. Although smart money is on Universal continuing the trend and basing this year’s house off of The Walking Dead’s fifth season, AMC will this summer be debuting a spinoff show – imaginatively titled Fear the Walking Dead – which will be set at the beginning of the zombie apocalypse all the way on the other side of the country, in Los Angeles. Although the premise isn’t that far off from the progenitor show’s, and although the typical ban on incorporating the cast of characters will presumably still stand, that at least gives Universal a certain amount of wiggle room to attempt something fresh and, hopefully, scary. There may even be the opportunity for the company to merge both properties into one cohesive experience – after three solid years already, the ability to take risks with the source material should be strengthened, not weakened.

That may indeed be the biggest advantage to sticking with such a tried-and-true property… although, should Fear the Walking Dead be selected as the focus, it does come with a new possibility: with AMC having already picked up two seasons of the new series, Universal just may be inclined to stay the course next year, too.

The compounded problems of an elongated presence
Of course, more importantly than what will be shown in a fourth Walking Dead haunted house, there’s the little matter of how it will be shown.

In an attempt to justify the IP’s third appearance at Halloween Horror Nights – and, presumably, to nab as many HHN virgins as possible – last year’s End of the Line was literally the size of two houses, both in terms of its square footage as well as its scareactor count, combined into one super-sized maze. It’s pretty hard to imagine just how, exactly, Art and Design will attempt to top this. Will it add on a third haunted house in duration? Or will it attempt to go in the exact opposite direction, going for a smaller, more intense experience that will shake up the status quo? When taken with the aforementioned lack of characters that can be imported into the maze, Universal’s options look increasingly constrained, reinforcing the idea (or is that the hope?) that a fundamentally different approach will be attempted.

But the uncertainties don’t stop with the prospective haunt’s contents – they actually spill out and swirl around the entire event, as well. When combined with An American Werewolf in London, HHN 2015 is suddenly looking very heavy on returning licenses. While, on the one hand, this may be appropriate for a 25th anniversary year, on the other, it raises questions about just how often and how long these IPs can be sustained, particularly across several consecutive years. And even beyond the creative considerations, the amount of negative fan feedback has already hit an almost exponential acceleration, particularly after 2013’s controversial decision to devote all of Horror Nights’s scare zones to The Walking Dead; how will the HHN faithful react to two reused licenses possibly sitting side by side in the lineup?

(On the flip side, however, for every enraged hardcore follower, there’s at least one or two newbies who are drawn in by their favorite television series headlining this Halloween thingie, and they, in turn, just might end up falling in love with HHN and form the next generation of devoted fan – otherwise, why keep bringing the franchise back?)

The aftermath
Even more importantly, however, is this one little inexorable fact: at some point, sooner or later, there will have to be a stop to The Walking Dead’s presence at Halloween Horror Nights, even if it’s only when the main series goes off the air, after all 12(!) of its planned seasons run their course. The first official image from Fear the Walking Dead.

That’s the most interesting question of this entire leaked house list, and the one that potentially has the biggest ramifications for Halloween Horror Night’s future – on both coasts. There’s little doubt that the event’s current phase is one of dependence (or is that addiction?) to IPs, generally, and Walking Dead, specifically; what does Universal do once that crutch is removed? Will the ballooning attendance numbers drop? Will another property be selected to be the next five-year icon? Is there another horror franchise with the same cultural imprint or pull as AMC’s flagship series? And, finally, what happens when all those top-tier licenses are exhausted?

It’s no exaggeration to say that The Walking Dead can make or break the future of Halloween Horror Nights – and that the final outcome’s shape can start to be seen this year.

We’ll have lots more on HHN’s lineup of houses and mazes over the course of the next several weeks. Until then, be sure to check out our insider’s guide to start your plan of attack, read about the first leaked house here, or leave your comments and questions below.

Top 8 ways to stay healthy during your vacation