In case you’ve been safely tucked away in the land of the Muggles for the past few years, there’s been this little rumor making its way around the wizarding community that Universal isn’t quite done with the boy wizard. An additional two phases are said to be currently under development at Universal Creative: one likely being a set of new interactive wand experiences at both Hogsmeade and Diagon Alley, and the other entailing yet another theme park land, which is most likely to be none other than the Ministry of Magic, the seat of the wizarding government in the United Kingdom. 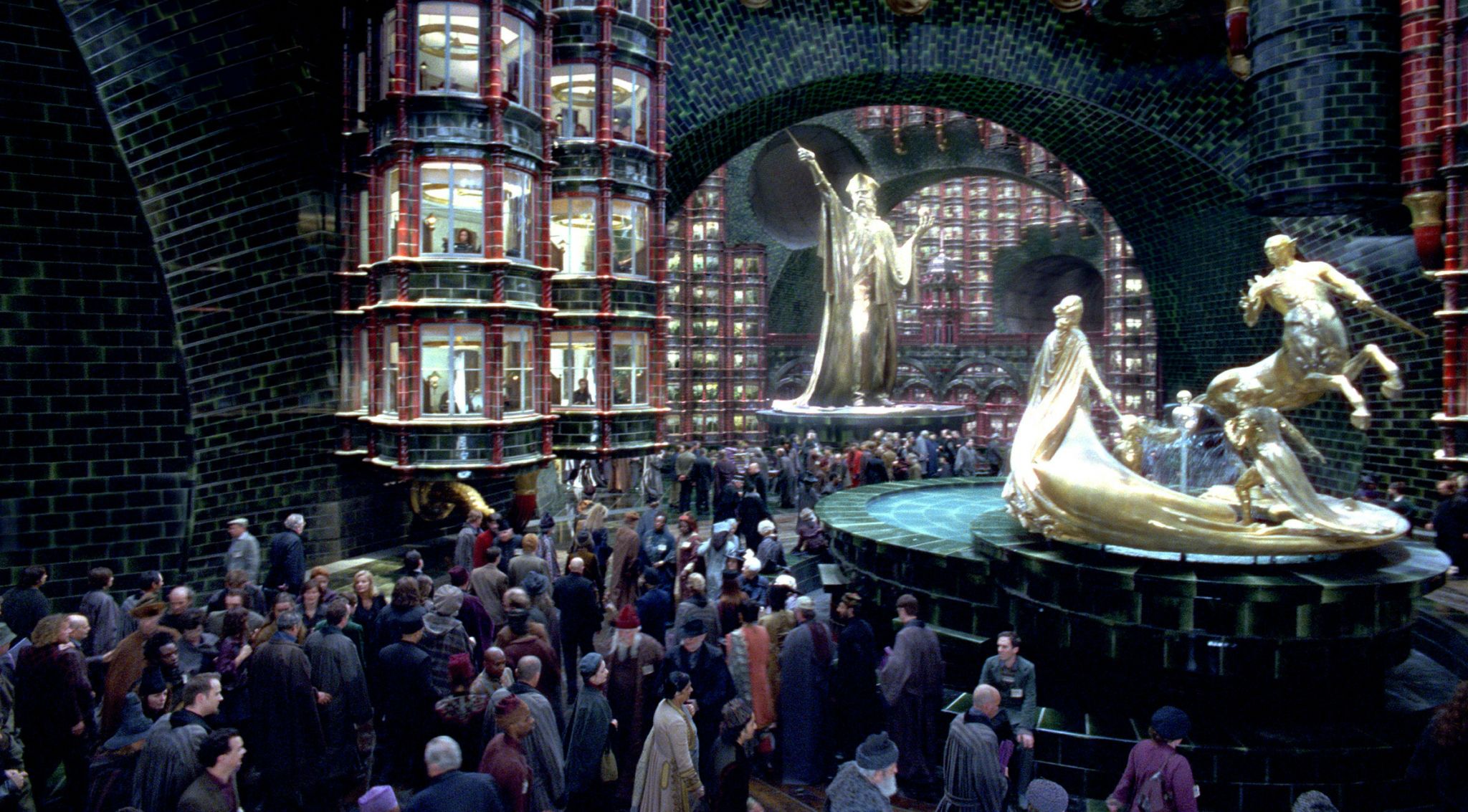 Welcome to the Ministry of Magic.

While it’s true that these plans might never leap off the drawing board, as happens to so many other blue-sky concepts, there’s actually quite a bit already pointing to their having some serious legs, particularly in regards to the new expansion. The Fear Factor Live building – which may or may not be home to Beetlejuice’s Graveyard Revue soon – is literally right next-door to Diagon Alley, and since the Ministry is also located in London, it’s not much of a stretch to see how the two could connect. Furthermore, reports of journalists getting a preview tour before Diagon opened last July included the little tidbit that the massive back-stage doors near the Celestina Warbeck show were open, revealing a utility road that went directly in Fear Factor’s direction. And, finally, there’s the little nugget that went around last summer that Alan Gilmore, who was the art director on the first four Harry Potter films and on the two theme park lands, would like to tackle the Ministry of Magic next.

So if we are, indeed, getting a third Harry Potter-themed area, what would it entail? Rumors here are practically non-existent, but that doesn’t mean that I can’t provide my own little wish list of what the main attraction should be…

Layout of the land
Unlike either Hogsmeade or Diagon Alley, Ministry of Magic is likely to be just one building, given the narrative and real estate requirements both (in the source material, the Ministry is a subterranean structure, completely hidden away from the prying eyes of Muggles). Just what, exactly, the exterior of the building will be is anyone’s guess, although it would probably just be an extension of the London waterfront that sits literally next-door – unassuming and completely thematically congruous.

The “exterior” of the Ministry.

All the attractions, shops, and restaurants being indoors does make for a nice variation on the other two pre-existent areas, and since this is just an expansion instead of a brand-new land (think of it more along the lines of Hogsmeade Station at the first Wizarding World), it would be a perfectly acceptable occurrence. However, this does make for some difficulties, significantly reducing the total amount of stuff to do, see, buy, and eat… though, then again, given how large Diagon Alley is in this regard, everything would probably balance out nicely – and might even be what Universal originally had in mind in the first place.

Harry Potter and the Duel of Fate
Hogsmeade has Harry Potter and the Forbidden Journey, which remains, five years later, one of the best rides ever conceived. Diagon Alley features Harry Potter and the Escape from Gringotts, a more family-friendly take on the franchise. Ministry of Magic, of course, will need its own headlining E-ticket attraction, something that will force theme park enthusiasts of all stripes to brave the long lines to the new building to experience it.

What do I think it should be? As it turns out, I have a few ideas – but we need to lay out the ground rules first, those unavoidable facts that Universal Creative and Warner Bros. will have to contend with when/if they tackle the project in the really-real world.

First of all, Universal will want to keep it a (largely) screen-based attraction, and they’ll want to do this for two reasons: (1) author J.K. Rowling has mandated that only the film actors portray their characters, meaning that Disney’s meet-‘n-greet approach is completely off the table and the possibility of deploying audio-animatronic figures is hugely decreased; and (2) there are a number of spectacular magical elements that special effects (i.e., practical illusions) would have a hard time replicating but which visual effects (e.g., computer-generated imagery) can do without a hitch. And then there’s the little trifle that the Ministry, as a specific location as opposed to a general narrative concept, barely ties into the Harry Potter mythos – at least, nowhere near as much as either Diagon Alley or, obviously, Hogwarts Castle. This means, of course, that the number of recognizable assets, from characters to sets to plot points, is much more limited.

There’s one last item to take into consideration before we get to my pitch: whereas Forbidden Journey was a straight mash-up of “best of” scenes from all eight movies and all seven novels, Escape from Gringotts was an attempt to lift a storyline directly from the source material and intertwine a new experience around it. While there are a number of narrative errors or minor glitches with its end result, it still, I think, is representative of the future of themed attractions, specifically the Universal ones. This is the direction that the company will almost surely be forced to take, anyway, given that dearth of material to work with that we mentioned just a moment ago.

The Hall of Prophecies.

So this is what we’re left with. The setting is the fifth film/book, Harry Potter and the Order of the Phoenix. Harry is led to believe this his godfather, Sirius Black (yes, that’s the nice bloke in the wanted poster outside of The Three Broomsticks), has been taken captive at the Ministry of Magic by Lord Voldemort and his Death Eaters (who have secretly returned to power, though the wider wizarding world is still in denial over it). Harry and his friends, who together make up the so-called Dumbledore’s Army, rush to the scene – only to discover that it was an ambush, an attempt to have Harry retrieve a prophecy made about him so that Voldemort may, at long last, have access to it. As the kids try to escape, Albus Dumbledore and his Order of the Phoenix arrive, and all hell breaks loose, headlined by a duel-to-end-all-duels between Dumbledore and He Who Shall Not Be Named.

This ride will function on the premise that guests, eager to help Harry and Dumbledore convince the rest of the wizarding world that Voldemort really is back, have signed up to join Dumbledore’s Army (yes, Harry and the gang are so desperate, they’re even turning to Muggles for assistance). That means that they, of course, tag along to the Ministry, and they’re caught in the middle between all the dueling witches and wizards. As events get out of hand, riders are ordered to evacuate the building (maybe Dobby the house-elf is charged with this particular task, making for a neat cameo), but they only end up being caught right in the middle of the epic fight between Voldemort and Dumbledore – maybe even being used as a pawn in the battle, another way for the greatest dark wizard of them all to try and get the upper hand. By the end, guests return to safety and are triumphant in having helped expose Tom Riddle’s return.

The ride vehicle here would probably work better as a variation on Forbidden Journey’s Kuka arm instead of Gringotts’s more traditional track design, but either method would be a good fit for the frantic, high-energy chase through the Ministry’s various rooms and the subsequent war that follows. And the queue could cover all those environments that the ride proper wouldn’t allow people to have access to, such as the inquisition rooms in the basement that are featured in the beginning of the movie/novel (it would also allow guests to see the main entrance hall, where the final duel takes place, before it’s utterly trashed by the contest). The highlight here may even be a ride through the Ministry’s special elevators, replete with enchanted paper airplanes that dart to and fro.

Let’s call it Harry Potter and the Duel of Fate (cheesy? Yes. But does it match “Escape from Gringotts”? Absolutely). And let’s get crackin’ on its construction.

What do you want from the next Wizarding World? Tell us in the comments section below!