The most unique theme park wedding in history

Think you’ve seen everything that can be done at a theme park? Think again.

On Back to the Future day, October 21, 2015 (y’know, when Doc Brown and Marty McFly arrived at the future), Stephenie and Jeff Lodermeier tied the knot inside of Universal Studios Florida, decked out in full BTTF regalia. Being a professional photographer – she also does Dapper Day at Disneyland and Walt Disney World Resorts – Steph had seen more than her fair share of weddings and decided she wanted something different.

What she ended up with is, perhaps, the most unique wedding in history, and arguably the most perfect way to enjoy Universal Orlando Resort.

We’ll let her tell the story in her own words – odds are you’ll be just as jealous of her special day as were we.

How did you meet Jeff? And how long have you two been dating?

We met on online on OkCupid six years ago, on October 14. I canceled last-minute three times on Jeff before I agreed to meet him. (I’d had some bad internet dating experiences. But when I met him, I felt at home.) So we’ve been together for six years. 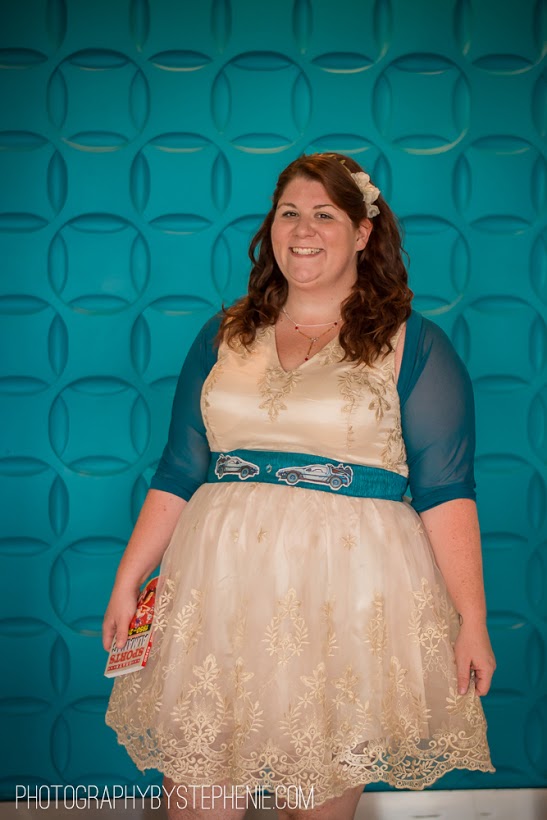 When/where/how did you get engaged?

We’re laying in bed the morning before our fourth anniversary, two years ago, looking at the internet together, and we saw a meme about how we were supposed to dress in 2015 because of Back to the Future. We’ve both always been huge fans of the movies; they’re in our individual top tens. I said we should plan something for October 21, 2015. And Jeff said, “We should get married on that day! “ And I was like, “OMFG – that’s the best idea ever!”

And we started talking about what we would do, and we went on Amazon and ordered a ring.

Back to the Future represents a lot of things to us. We are both independently obsessed with the notion of time travel. We both love pop culture. I was born in 1985 (when the first movie came out), and I remember hearing Robert Zemeckis talk about why he made the movie, and it resonating with me when I was young. It’s just one of those movies we’re each obsessed with, and when we realized we were equally obsessed, it was very exciting.

We’re very non-traditional. I’m a wedding photographer for a living, so I’m at weddings every weekend. I love my job. It gives me the chance to live out every dream wedding I could imagine. But it’s made the “traditions” of weddings very commonplace to me. Jeff is my second photographer, so he’s been to a majority of them, as well. 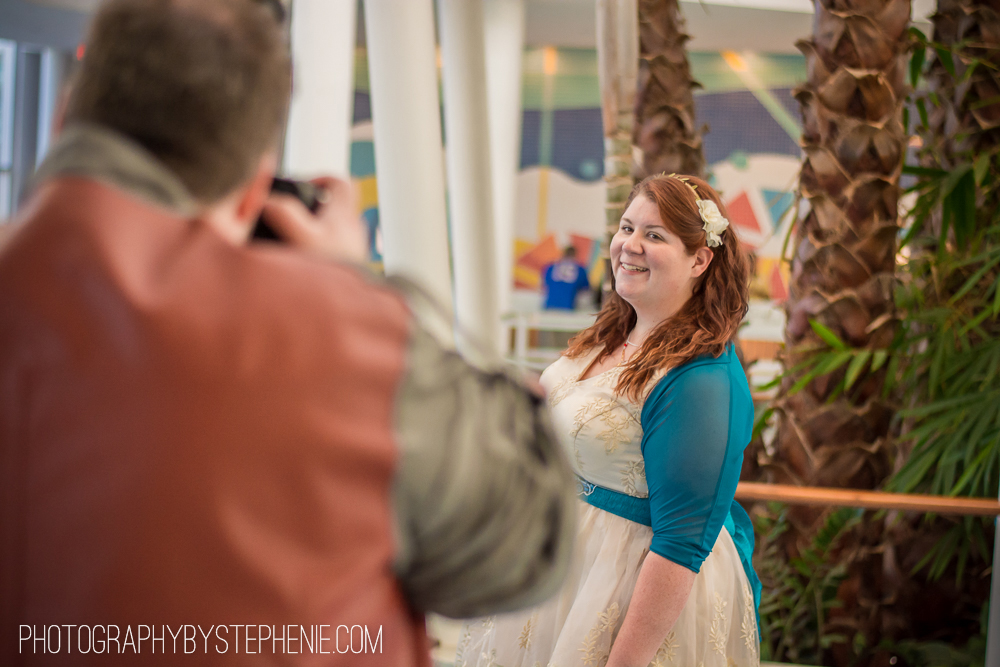 As we started to think about what we wanted to do, we knew we wanted a BTTF location to be a central theme, and we knew we wanted it to be very intimate and for the ceremony to be exclusively for us. Years ago, I went to LA to tour the BTTF filming locations, so we started thinking maybe we would do that or rent a DeLorean locally or something. Finally, we settled on having the ceremony – on the down low – at Universal Orlando, and we thought we might do a reception at our house a few days later, but that didn’t pan out because it became too “wedding stressful” with a caterer and decor and landscaping our backyard. We wanted to eliminate stress as much as possible. So we settled on a little dinner afterwards somewhere in Universal.

Initially, we told our friends and families not to come, because of the expense, but they insisted on showing up, and we were so glad we had about 20 people committed to watching us tie the knot.

How was Universal in helping to set everything up for you?

We left Universal out of it. We were under the guise of begging for forgiveness rather than asking for permission. We didn’t want to be told no and have our names put on a list, so we knew our ceremony was going to be less than a minute long, and figured we would gather and do it quick.

Once they found out, they were very nice, and Universal gave us some perks throughout the day, which was so considerate.

Please walk me through your wedding day. It sounds so exciting!

The weekend before, we had a joint bachelor/bachelorette party at Busch Gardens Howl-O-Scream, because we are big fans of the event.

For the wedding, we all stayed at Cabana Bay Beach Resort, because we had been dying to stay there – I love mid-century architecture and kitsch. It was the perfect backdrop for our friends and family, and we enjoyed the pools, the bars, and the convenience. 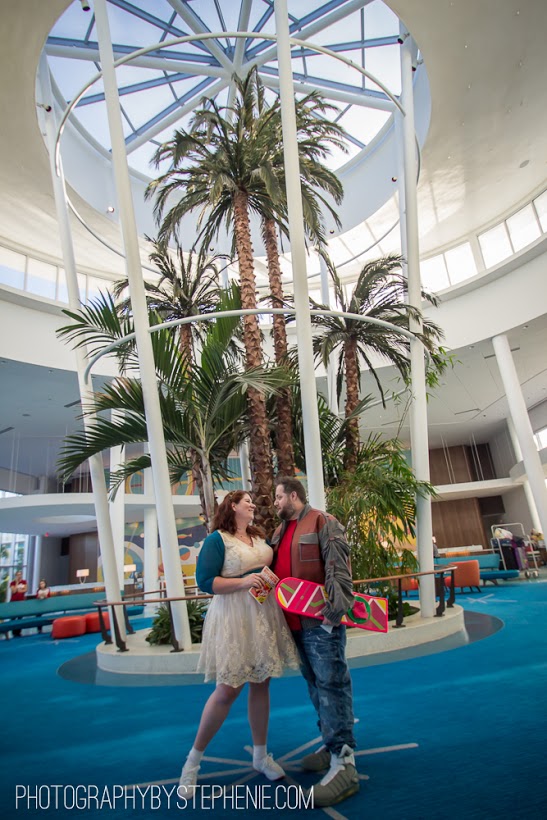 Two years ago, I bought my dress after finding it on eBay, new for $25.00. I didn’t want a traditional gown and never set foot in a David’s bridal. It was a size too small when I bought it, but I’d lost about 40 pounds this year after going vegetarian, so it fit perfectly. I bought Keds, ala Jennifer Parker’s outfit. I found a design online for a Flux Capacitor necklace, and my mom made that for me. And I made myself a teal sash with iron from the Back to the Future, Part II DeLorean. I wanted my hair and makeup to be how I normally look. I didn’t want a bouquet or a garter, so I held the sports almanac, and that seemed fitting. 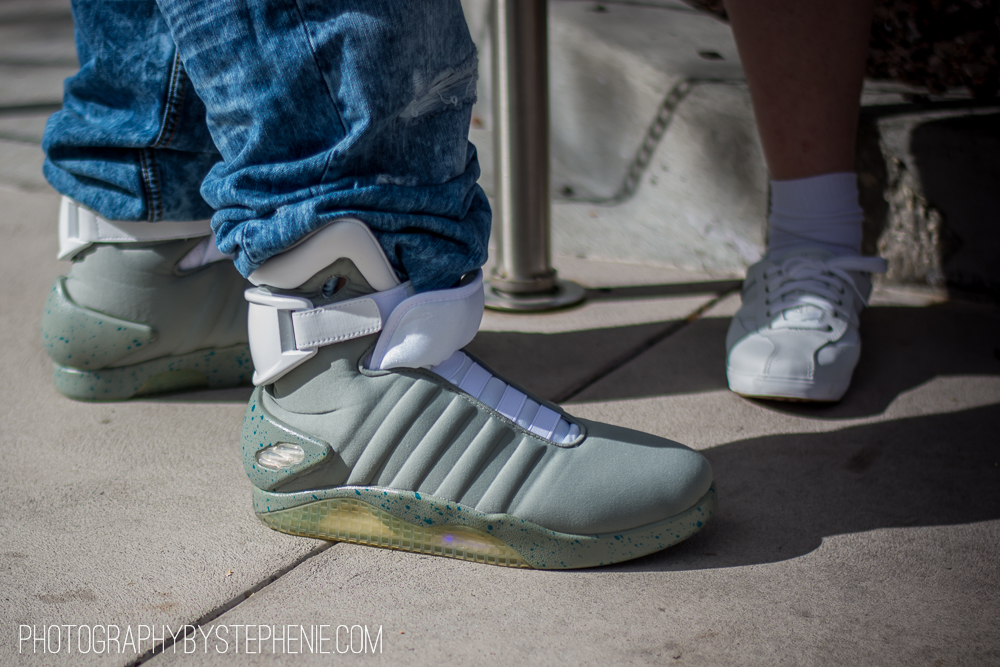 Jeff didn’t know what direction he wanted to go for his clothes initially. Finally, he decided he wanted 2015 fashion from the movie, and we bought him some trendy acid-washed jeans, a red T-shirt, and Marty’s jacket from Back to the Future, Part II. Unfortunately, it did not self-fit or self-dry, but it looked great! We also purchased a replica of the Nikes from the movie. They light up and everything. And we purchased a (non-working) hoverboard for Jeff as a prop. 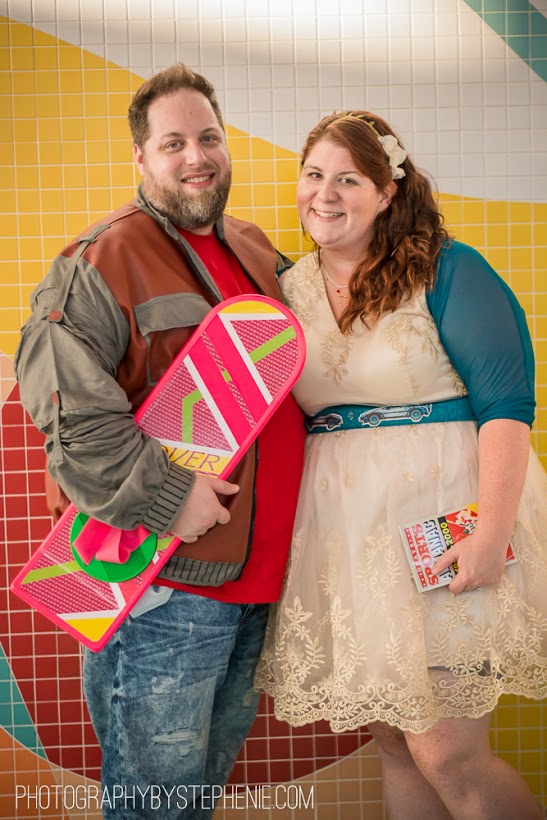 We asked our good friend, Jason Frink, who has no issues with public speaking, if he would officiate our wedding, and he went through the process through the Universal Life Church online. We thought it would be fun for him to wear two ties like people in 2015 do in the movie. 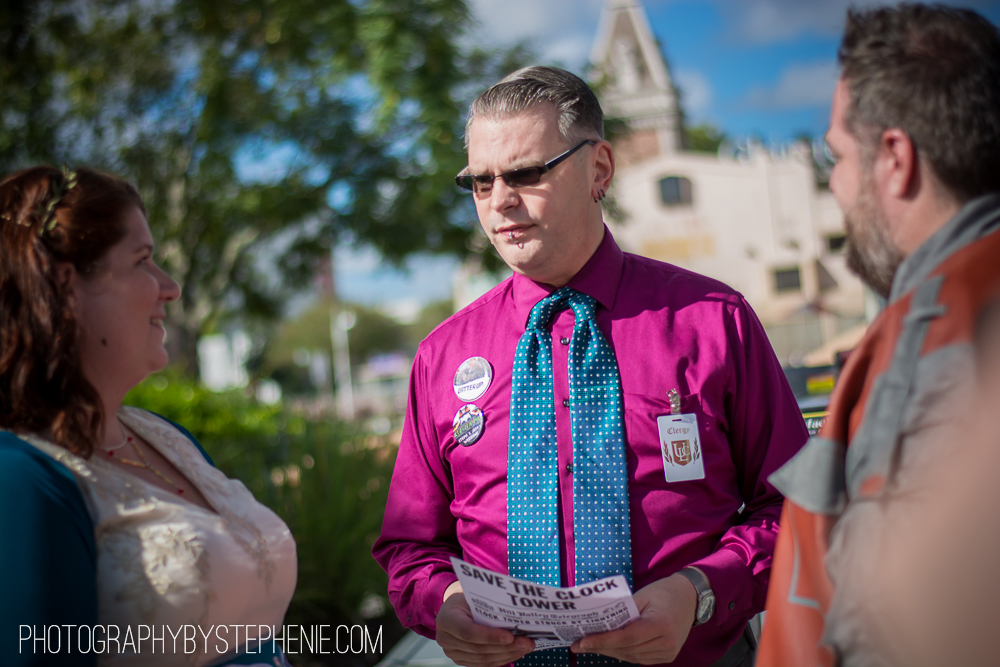 I also purchased two bottles from Michaels that looked similar to the Pepsi Perfect bottles from the movie. We ordered some stickers for them, and they were the perfect prop; we got lots of compliments on them.

On the day, we got up early-ish, put on a Back to the Future playlist that included music from the movies, as well as songs personal to us, and we got ready together. Before we left, privately we said our vows to each other – unscripted and from the heart.

Once we were ready, we walked around the resort with a friend and took pictures. We didn’t want to hire a wedding photographer because this just wasn’t a traditional day, and we know enough photographers that we knew we could get what we wanted. So my friend, Leila Frink, took the pictures, and I directed the photography and I edited the photos. Essentially, I shot my own wedding, which was perfect for us. 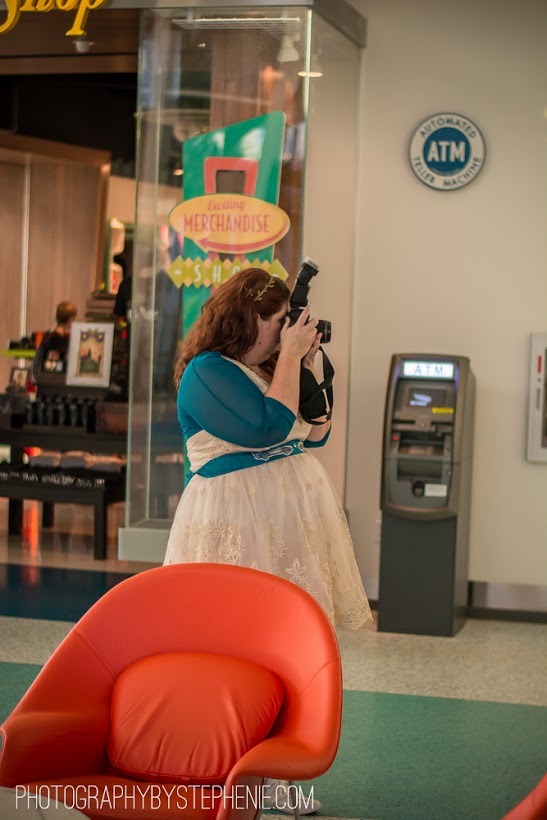 We headed to Universal and went straight to the DeLorean, gathered our friends and family around, and did our ceremony, which lasted 45 seconds. Afterwards, we took some pictures, had some drinks, and began doing the things Jeff and I hadn’t done since the last time we were in Universal a few years ago (for Halloween Horror Nights). We had a group of about 20, so it was like herding cats. But we managed to ride Transformers, Harry Potter and the Escape from Gringotts, and the Hogwarts Express before Jeff and I left to go back to the resort and grab our favors for the evening’s dinner. 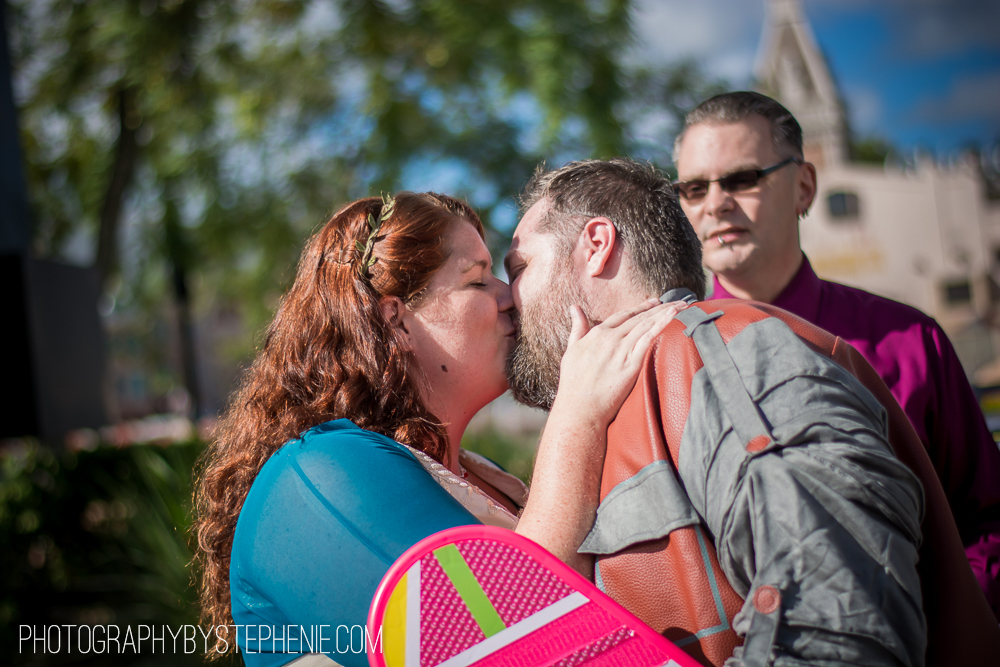 Each item in the favor bag was handmade. Here is what we gave our guests:

Each bag said “be careful in the future,” which is what the police say to Jennifer when they drop her off at her 2015 house in the movie.

We ended the day with dinner at Royal Pacific Resort, which was a nice, quiet affair with our friends and family.