After three years of continual teases, delays, and general confusion amongst the theme park faithful, Disney this afternoon finally revealed the first details on Star Wars Land at its biennial D23 expo.

These first tidbits admittedly amount to more of a tease, since they were unveiled during the live-action film panel, but we should expect much more this evening, when the Parks and Resorts segment kicks off.

Don’t worry – we’ll be sure to update this story with all the new tidbits then.

Disney’s further revelations from its nighttime panel didn’t revolve around Star Wars Land, though they’re still worth mentioning: Star Tours: The Adventures Continue will be getting one of the new planets from Episode VII: The Force Awakens (hopefully Jakku!), Star Wars Weekends will be expanded into Star Wars: Season of the Force at both American resorts, and, finally, Hollywood Studios will be getting a new Star Wars-themed fireworks show set to John Williams’s famous score (though this last bit was previously-reported information).

Star Wars Land – which, by the way, is not the official title – is coming to both Walt Disney World and Disneyland Resorts, though no specifics as to exact locations were provided. It seems almost a complete certainty, however, that the Floridian version will arrive in Hollywood Studios, given (1) all the plethora of attractions that have closed there in the past several months, and (2) the fact that Star Wars already has a presence there, with Star Tours: The Adventures Continue and the Jedi Training Academy.

And, yes, both coasts will be getting the same version of the land.

What is its premise?

Taking a cue from Universal’s Wizarding Worlds of Harry Potter, Star Wars Land will occupy just one specific location from the Star Wars galaxy, with all the rides, attractions, and experiences conforming to its specific theme. And at 14 acres, it’s the single biggest area Disney has ever built for just one property – fitting for Hollywood’s biggest intellectual property of all time. (Hogsmeade is approximately 20 acres, just for comparison’s sakes).

Unlike Universal, however, Disney’s Imagineers have opted to go in a completely different route with this more immersive approach: instead of recreating a location already depicted in the SW films or television series, the theme parks will present a brand-new planet. What’s more, Disney promises that “nothing will be out of mythology,” meaning that every building, character, and ride will tie somehow into the ever-more-unfolding Star Wars universe.

What is this new planet? While we don’t have a name as of yet, we do know that it’s one of the very last stops before “wild space.” Expect that rough-and-tumble, anything-goes vibe to play into all of the land’s experiences.

What are its attractions?

Only two specifics have been singled out in both the (leaked) concept art and the quotes from Bob Iger, the CEO of the Disney Company: guests will be able to board – and even to fly! – the iconic Millennium Falcon and to experience some sort of battle between the Resistance and the First Order (those are the new names for the original films’ Rebel Alliance and Galactic Empire, for all those not up to speed with Episode VII: The Force Awakens’s latest developments), though there is no word on whether this will be a traditional ride, a show, or something else entirely. 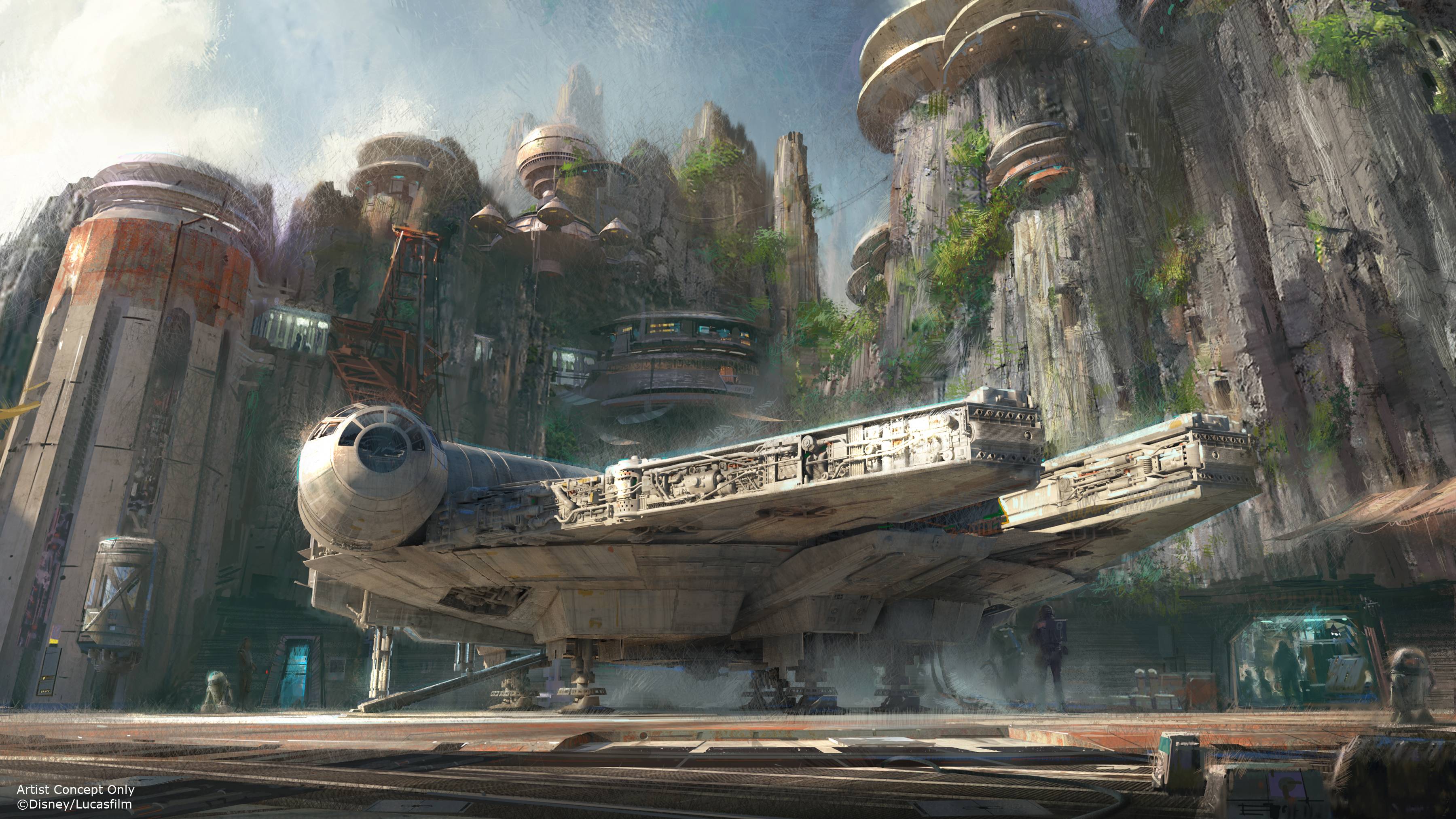 Yes, as a matter of fact. A restaurant that looks suspiciously close to Mos Eisley’s cantina in Episode IV: A New Hope is coming, which should make the SW fanboys happy, given the continual demand for such an experience over the past few years.

Oh – and it looks like there will even be massive tusked beasts ambling along the streets, providing a decidedly feel than anything available at Universal Orlando Resort.

In short, we can’t wait. 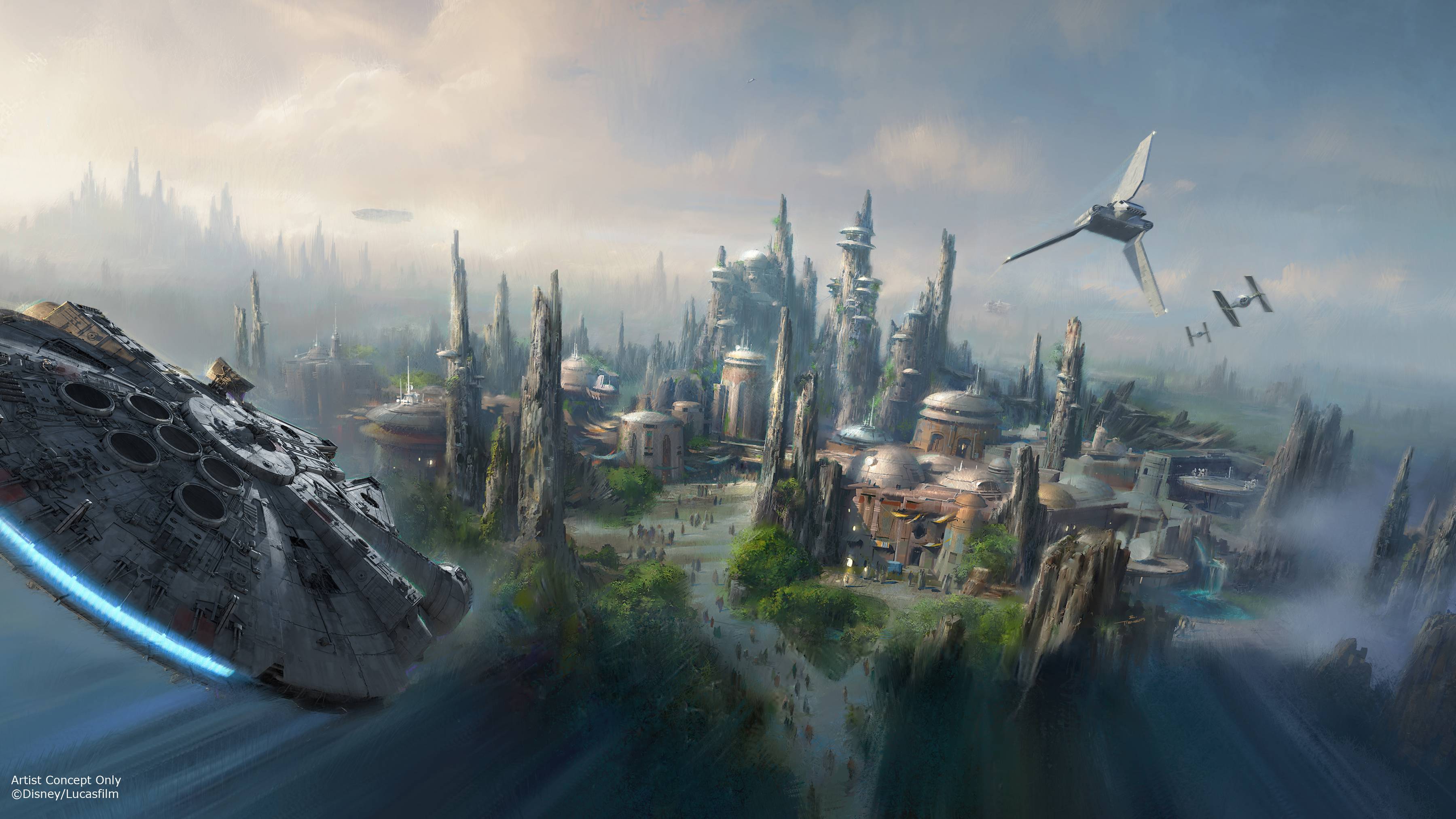 What do you think – will Star Wars Land blow Harry Potter out of the water? Sound off in the comments below.

4 videogames Universal NEEDS for its next park