Let’s dive in and explore a few of the overlooked photo opportunities hiding throughout Universal Studios.

Location: Springfield, on a bench attached to the Quik-E-Mart 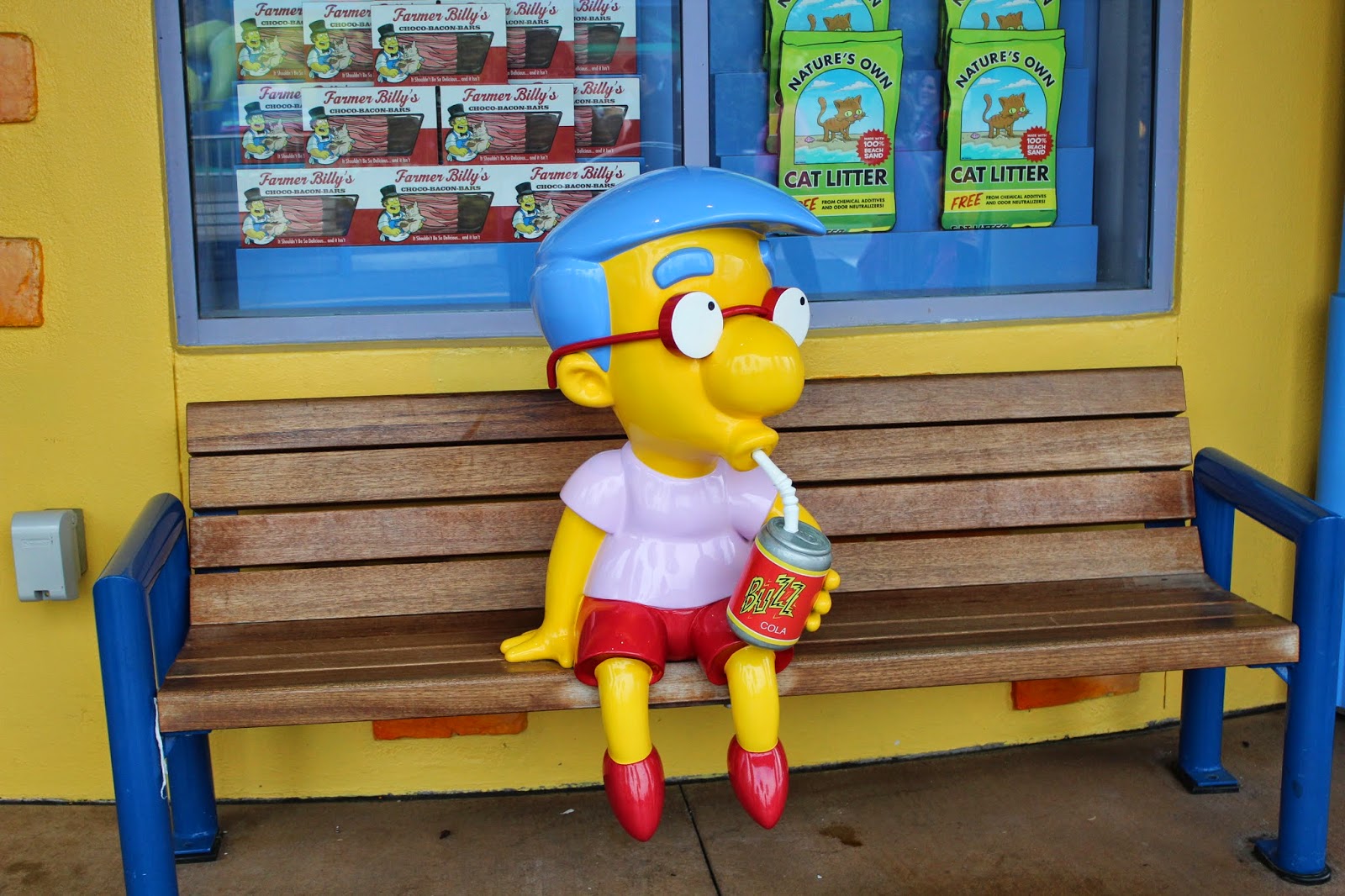 Springfield U.S.A. is a treasure trove of photo spots, some obvious, some less so. Everyone’s gotten their picture taken with Barney, Duff Man, and Police Chief Wiggum, but not many notice poor Milhouse Van Houten sitting outside the Kwik-E-Mart.

Milhouse is just as detailed as the other Springfield denizens (he’s even sipping a Buzz Cola), and an empty spot on his bench makes for a great photo op. Bart’s best friend is located next to the ringing phone outside the Kwik-E-Mart (pick that up for another easter egg).

Location: New York, entrances next to the Film Vault store and across from the Arcade 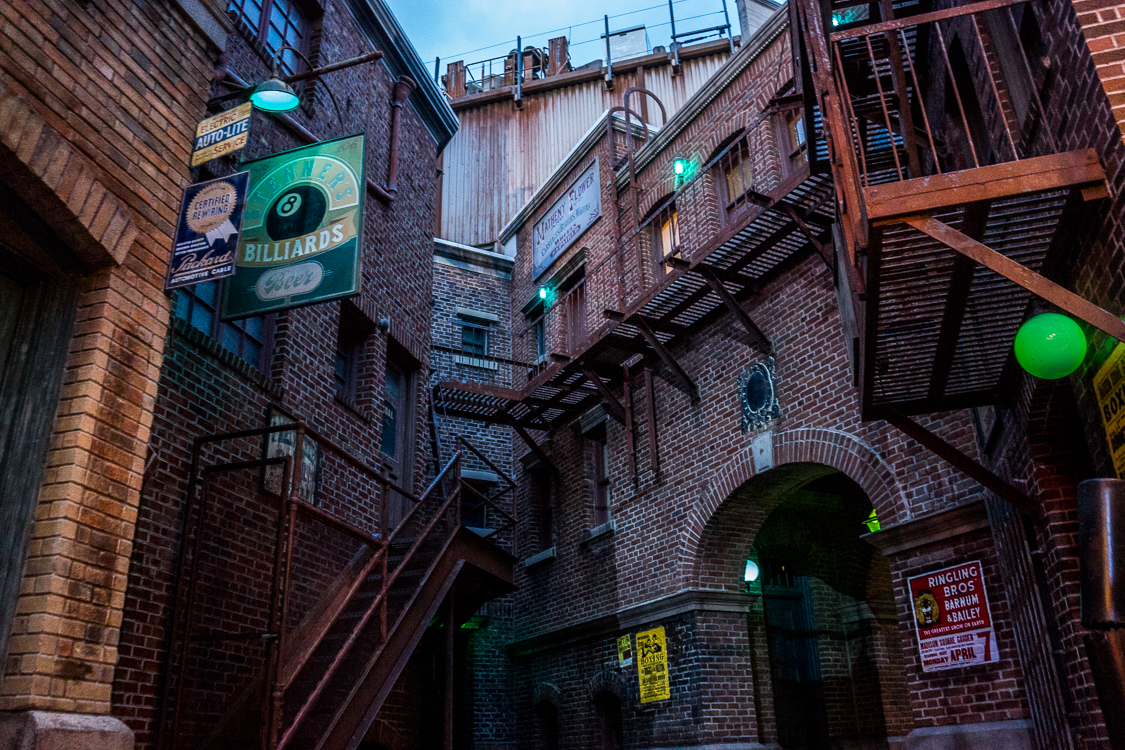 Arguably as immersive as The Wizarding World of Harry Potter.

Halloween Horror Nights veterans are quite familiar with this popular, claustrophobic scare zone spot, but daytime vacationers often miss it entirely. Sting Alley is a testament to the park’s origins as a working film studio, an immersive, film-ready set. Though filming in the park isn’t that common anymore, the area remains open to the wandering public.

Within Sting Alley you’ll find a slice of old New York isolated from the rest of the park. Advertisements for the Ringing Brothers’ Circus and a boxing match line the walls, and numerous catwalks and fire escapes flank the roofs. Pictures taken here might actually pass for authentic New York.

If you don’t know what you’re looking for, Sting Alley can be hard to spot. The path cuts through the facades that hold the Film Vault Store and the Ben & Jerry/Starbucks. On the lagoon side, you’ll find it easily if you move past the Film Vault store toward San Francisco and look for the opening on the left. If you’re on the Revenge of the Mummy side, move toward San Fran past the Blues Brothers stage and bear right. 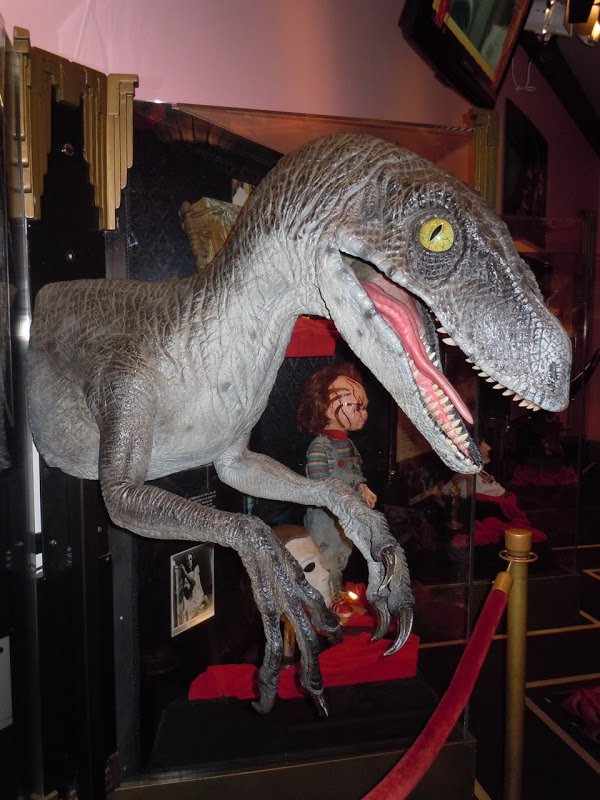 Over at Islands of Adventure, you can snap a posed picture with enormous T-Rex and Spinosaurus models. The Studios has its own photorealistic dinosaur in the form of a velociraptor lurking in the lobby of the Horror Makeup Show. Islands of Adventure now hosts the Raptor Encounter if you’re interested in seeing a “living, breathing” version of the creature, but this model was actually used for positional and close-ups in the original Jurassic Park film.

Bonus: The Horror Makeup Show lobby functions as a museum on horror classics and hosts plenty of other fun photo ops – visitors can pose with Chucky, a monster from John Carpenter’s The Thing, and Jack the Clown from Halloween Horror Nights, among other things. To experience the lobby with minimal crowds, visit just shortly after the scheduled start time of the Makeup Show – it should be nearly empty. 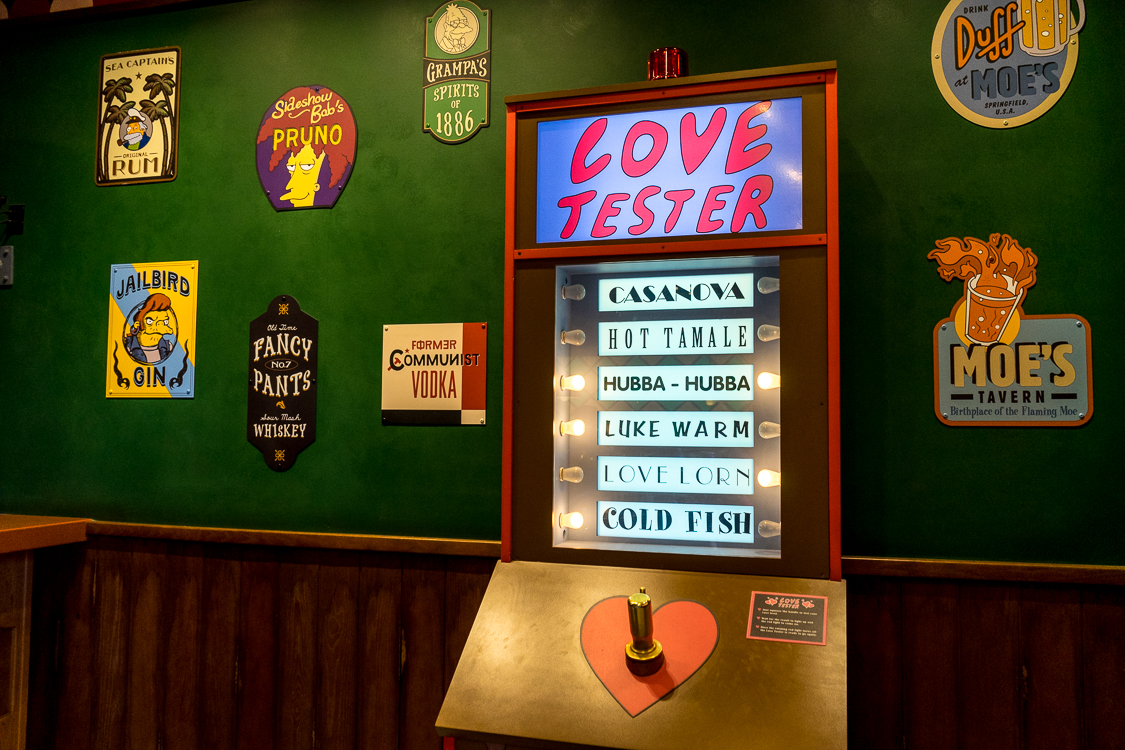 Are you Cold Fish?

Any fan of The Simpsons will get their picture in front of Moe’s Tavern or with the beleaguered Barney inside, but many miss the unassuming “Love Tester” sitting in the bar’s corner. The machine, which identifies one’s rank on the “love scale,” first appeared in the classic episode “Flaming Moe’s,” with encore appearances in “Krusty Gets Kancelled” and “The Simpsons Spin-Off Showcase.”

The Love Tester works just as it does in the show, sans voice: one presses the button, and the machine will light up with your rank, leading to a potentially hilarious gag (depending on the selection and your sense of humor). For extra fun, take a picture with your significant other and see if the Tester approves.

The machine is located in the back corner of Moe’s, immediately to your right via the main entrance. With Barney close by, this corner can get crowded, so be patient in waiting your turn.

2. Up Close with the Animal Actors 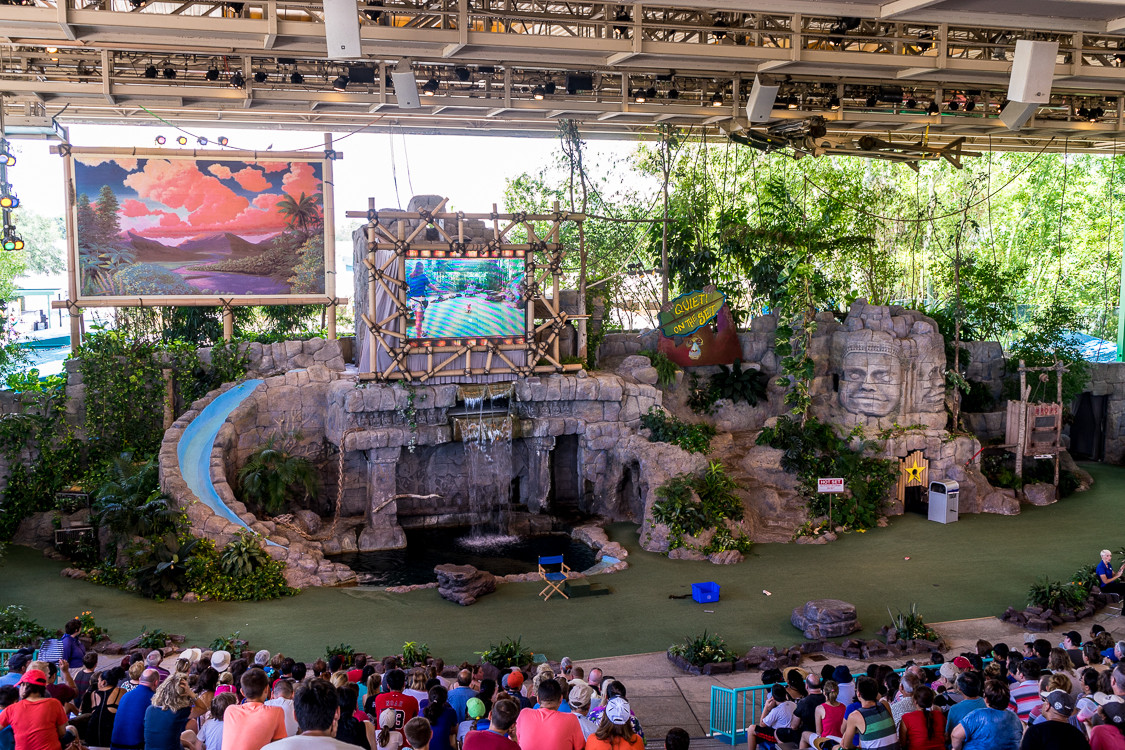 Trainers will usually bring several of the animals to the front of the stage, where the turf meets the pavement.

The Animal Actors show is a hugely underrated delight, playing host to a menagerie of screen-used animals: dogs, birds, monkeys, and even pigs! One is welcome to take pictures and videos throughout the performance, which can vary show-to-show depending on the mood and cooperativeness of the critters. But many don’t realize that if the animals are well-behaved, trainers will sometimes bring out several of the audience-friendly animals at the show’s conclusion. Exiting audience members will have a moment to pet the animals (usually dogs) and snap a quick picture.

Keep in mind the photo opportunity isn’t guaranteed – the comfort and safety of the animals comes first. In a performance earlier this year, several dogs were brought out for photo opportunities, including a dog from Marley & Me and a pug from Men in Black II. If you want to take a picture, have your camera ready and ask the trainer if it’s okay (they usually encourage it). Be gentle and kind to the animals, and enjoy your picture with a furry celebrity! 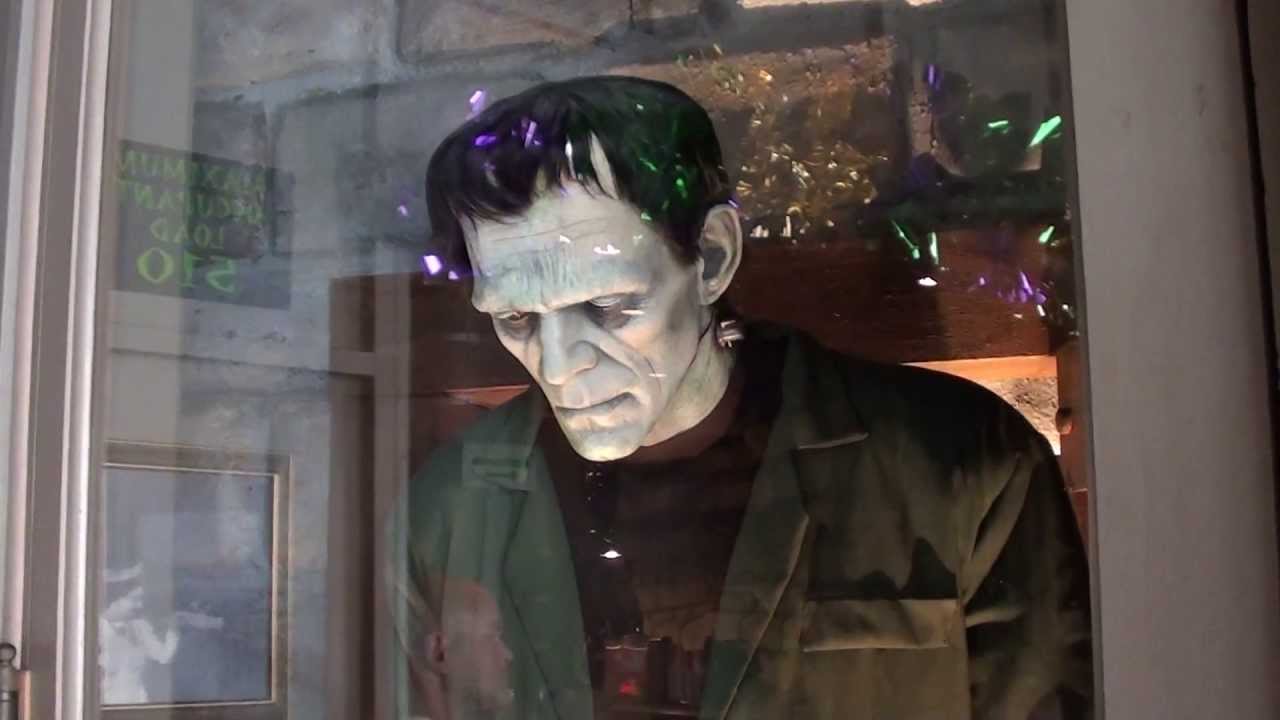 The Leaky Cauldron and Springfield’s Fast Food Boulevard have become the de facto counter service restaurants of choice at the Studios, and rightly so. The Monsters Cafe isn’t culinary nirvana – it has your usual assortment of chicken platters and hot dogs – but the interior hosts some spectacular tributes to the monsters that started it all.

Throughout the restaurant’s seating areas, you’ll find chilling, life-size vignettes of Frankenstein’s Monster, Dracula, The Wolfman, and the Creature from the Black Lagoon, each in their respective environments. If you’re a Classic Monster fan, you won’t want to miss posing with these villains. Don’t worry – you can explore the restaurant without eating. If you look around, you’ll find some props and costume pieces from even more obscure creature features.

These are just a few of the Studios’ many photogenic spots. What are some of your favorites? What else have you discovered throughout the backlot?