This month I visited Universal Orlando Resort solo without my family. Visiting the park by myself doesn’t happen often but it enables me to do things at my own pace and at my own discretion. 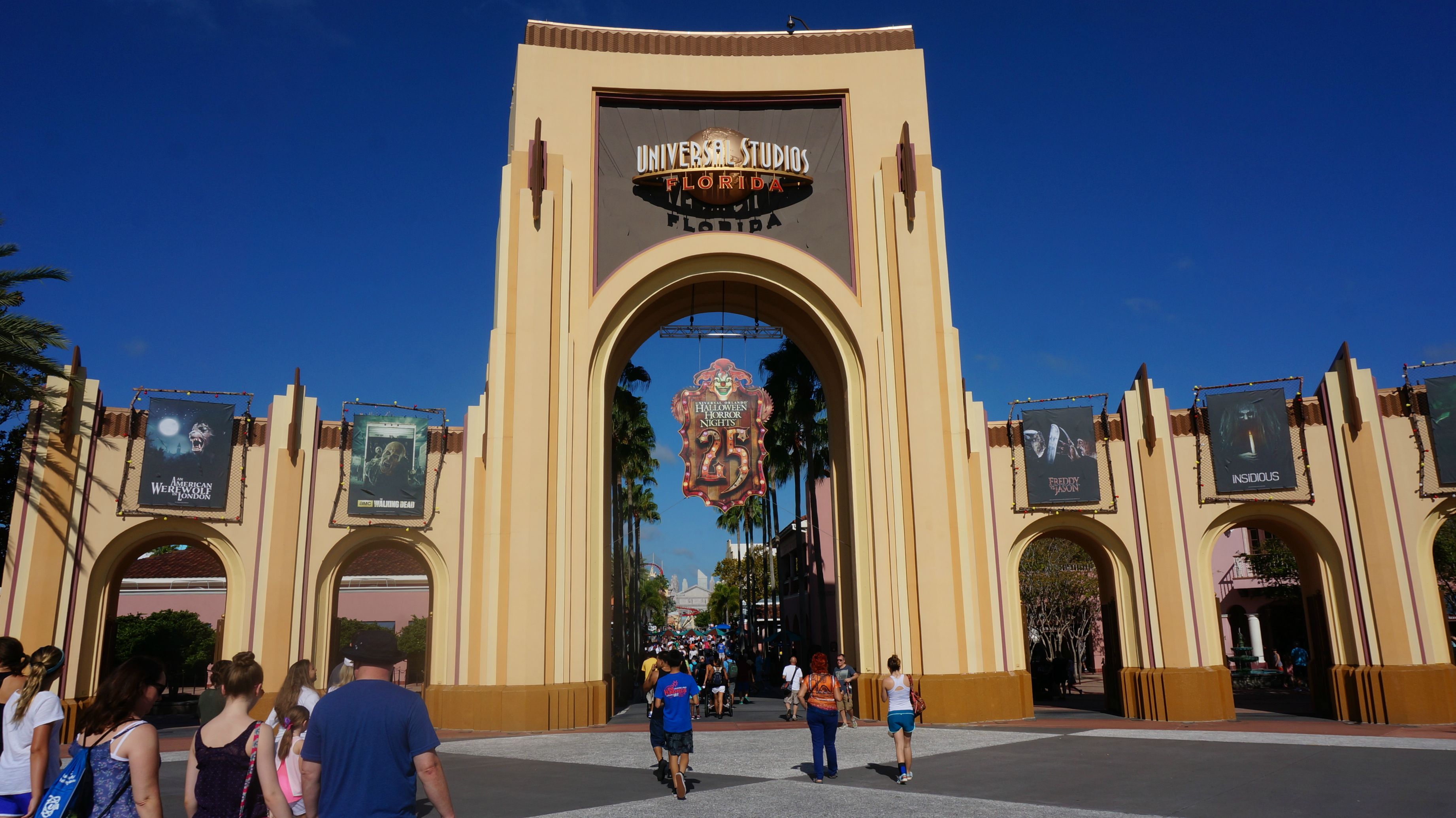 Rain was predicted the day I went to Universal Studios Florida (USF). It was hot and muggy that day so when it did rain, it was a welcome relief. The convenient thing about USF is most attractions are indoors and allow guests the opportunity to escape the inclement weather or take a break from the heat. 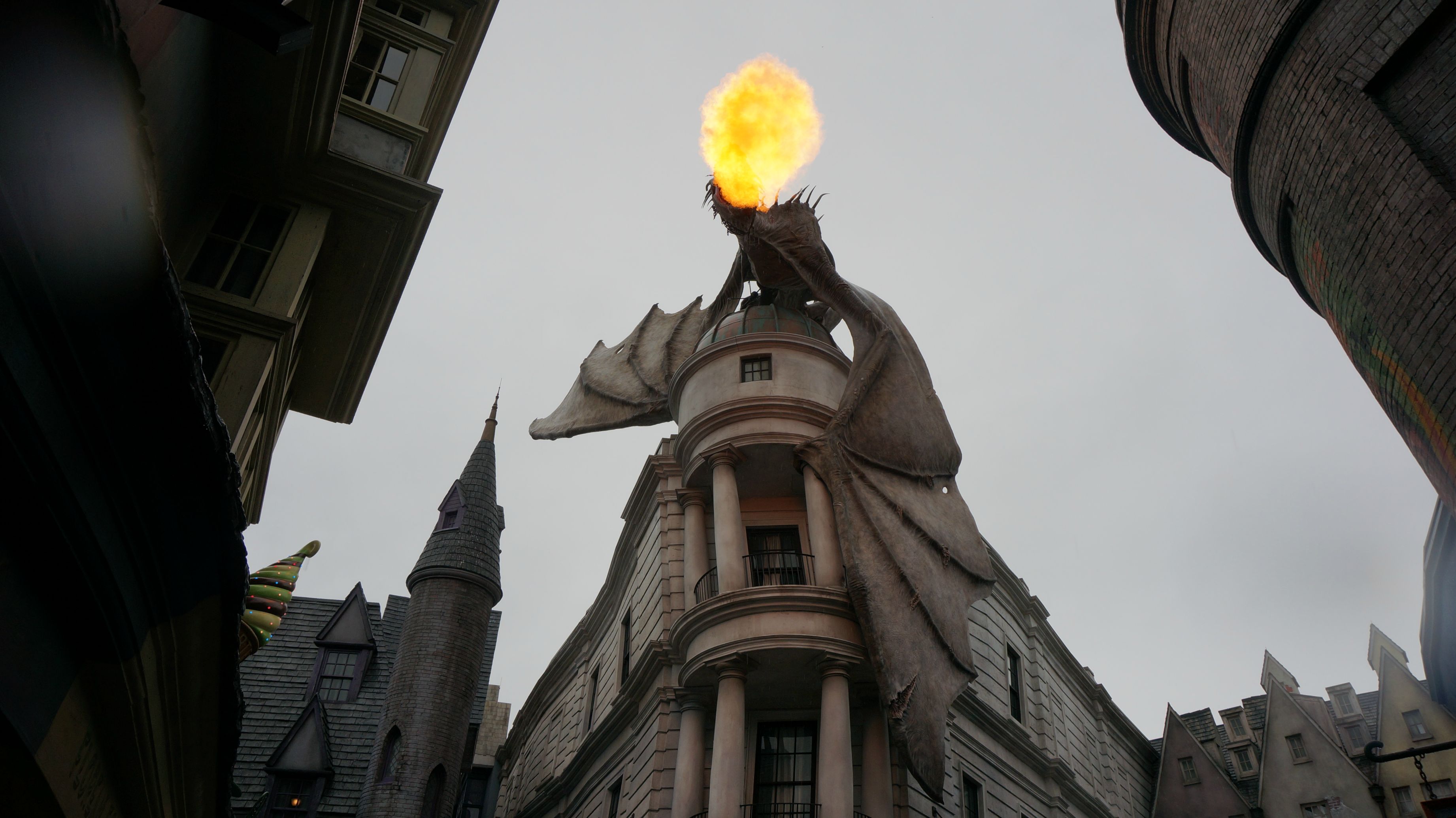 The crowds at USF were moderate with posted wait times ranging from 50 minutes for Despicable Me Minion Mayhem, 45 minutes for Escape from Gringotts, 30 minutes for Men In Black and only 10 minutes for most of the remaining attractions. 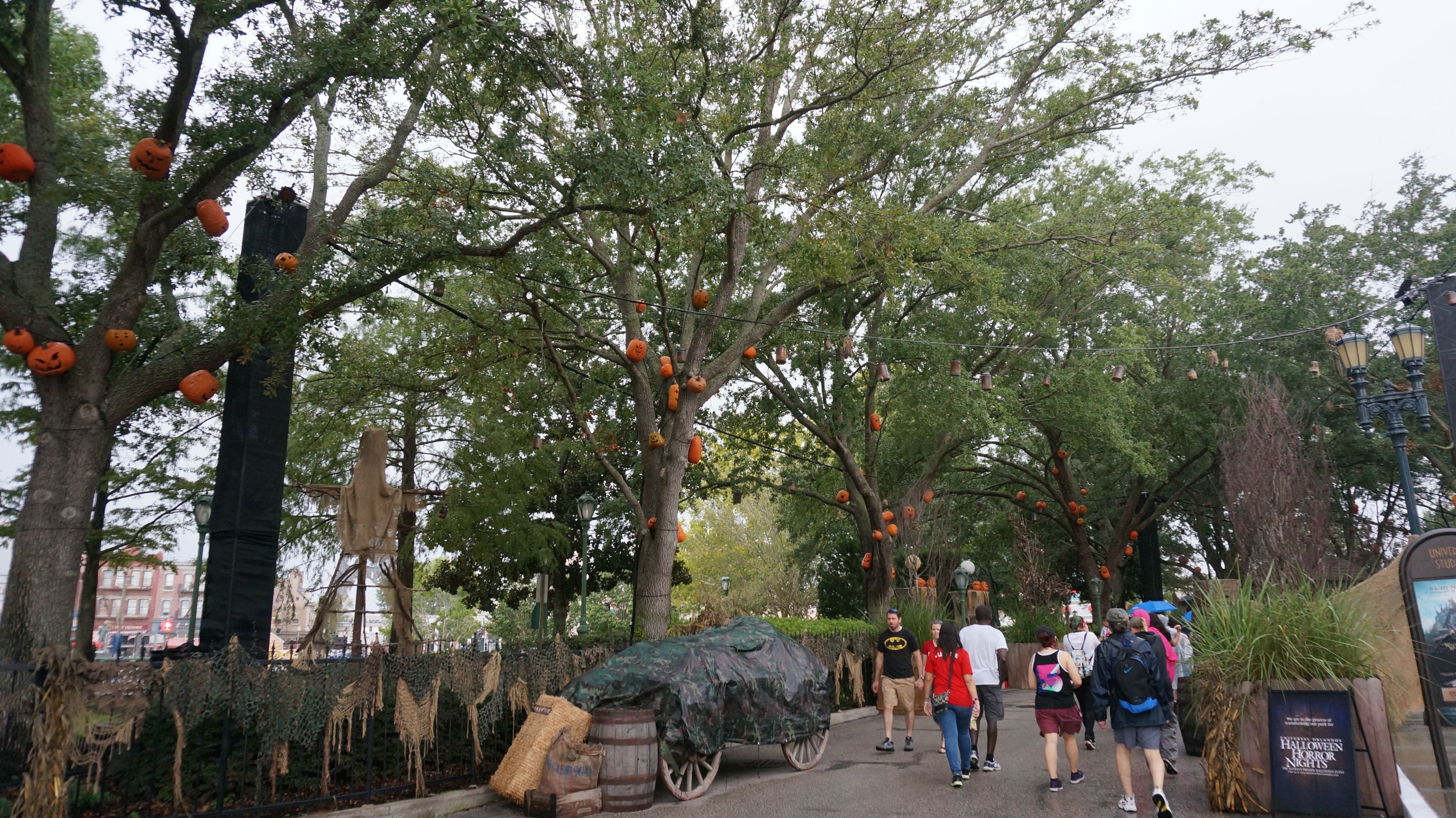 Props for the highly anticipated 25th Anniversary Halloween Horror Nights were located throughout the park but nothing was visible that would frighten or repulse young or sensitive family members. Most of the visible props were things like abandoned vehicles and jack-o-lanterns in the trees. 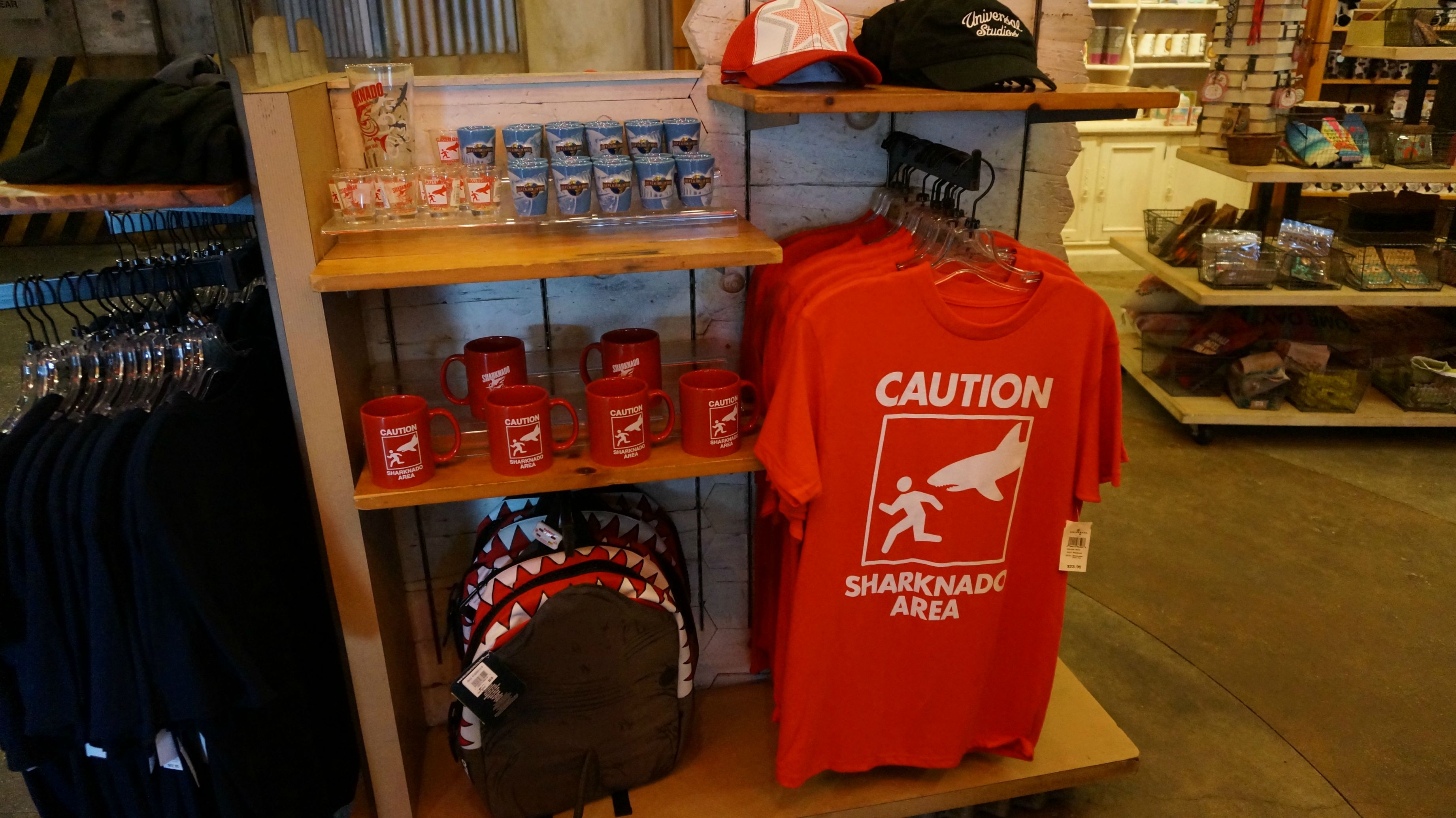 I laughed when I saw some Sharknado merchandise in the Aftermath gift shop exiting Twister. Shirts, hats, mugs, plush toys and even a shark backpack were available for purchase by fans of the cult movie. After my visit to USF, the Twister merchandise shop was converted for Halloween Horror Nights. 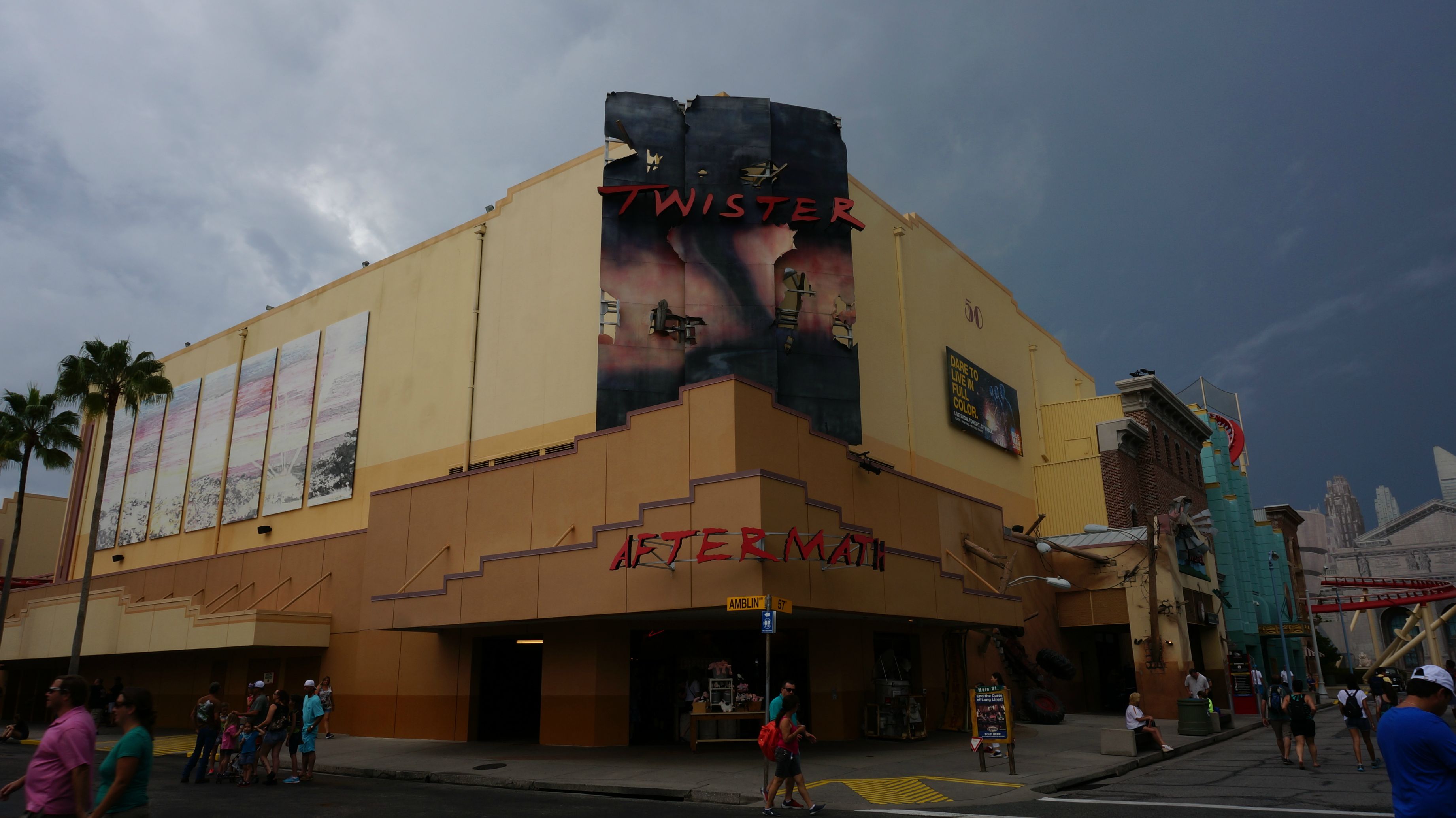 Because the posted wait was only 10 minutes, I decided to ride Transformers: The Ride 3D. This was the first time I used the regular queue (I usually use the Single Rider or Express Pass queue). 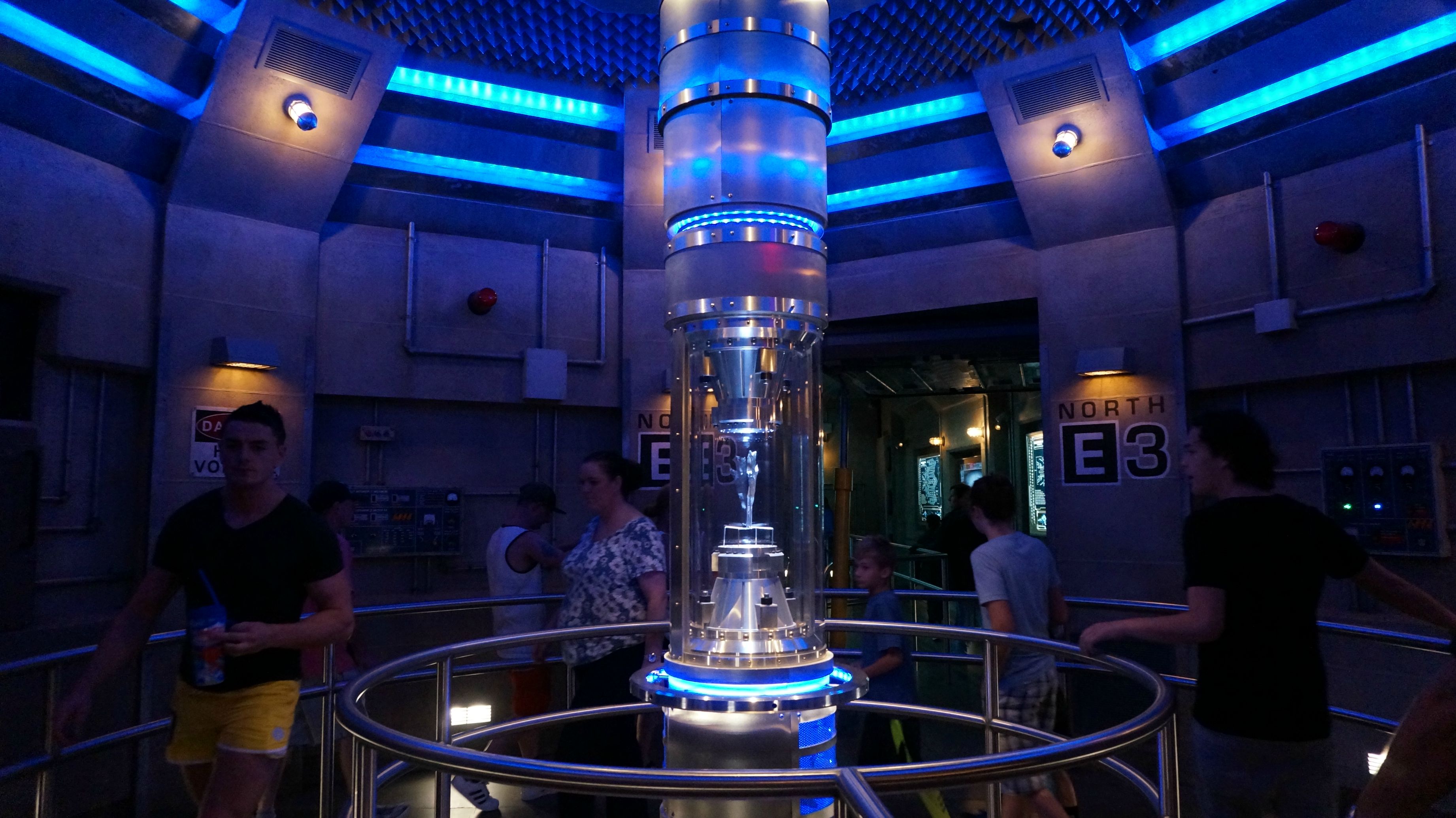 I really liked the immersive theming and props including the impressive and mesmerizing AllSpark. Transformers: The Ride is my favorite non-Harry Potter attraction at Universal Orlando and saving the All-Spark from the Decepticons is a thrilling and compelling adventure. 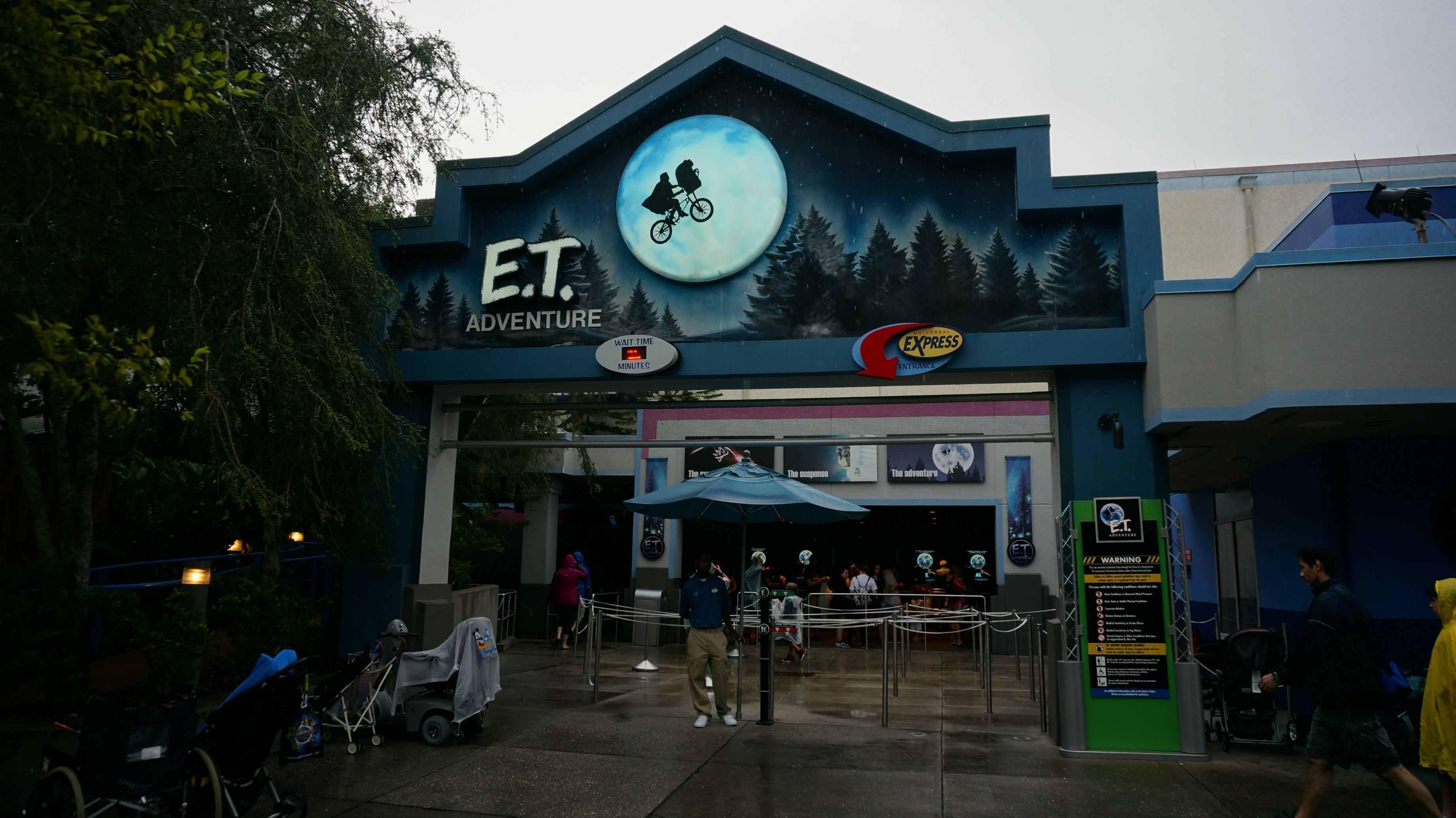 E.T. is a classic attraction I enjoy at USF and was able to ride it after only waiting for 15 minutes in their unique, elaborately themed queue. 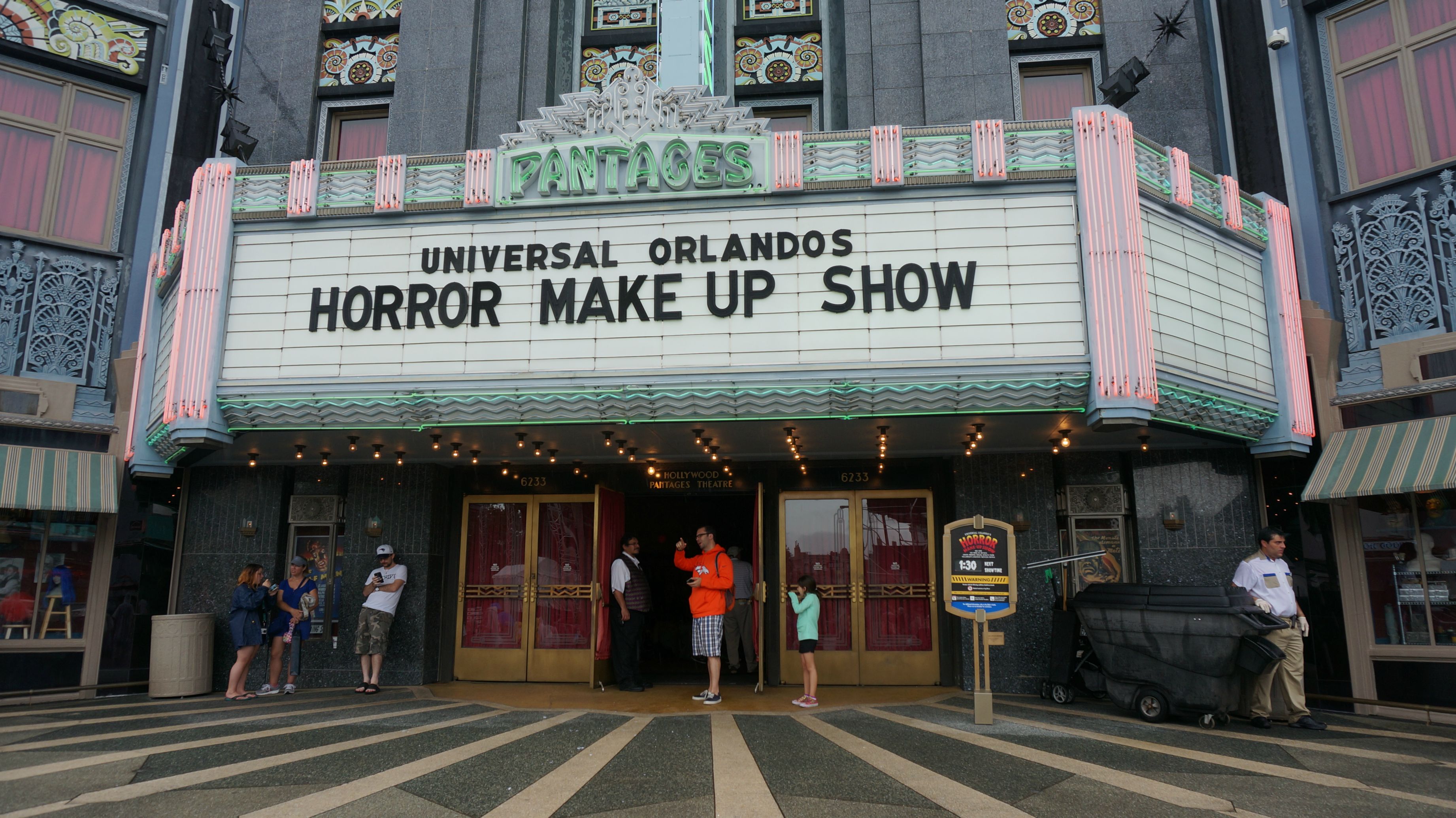 I also attended the Horror Makeup Show this visit. This comedic and informative show about the history and secrets of Horror Movie makeup is very amusing. 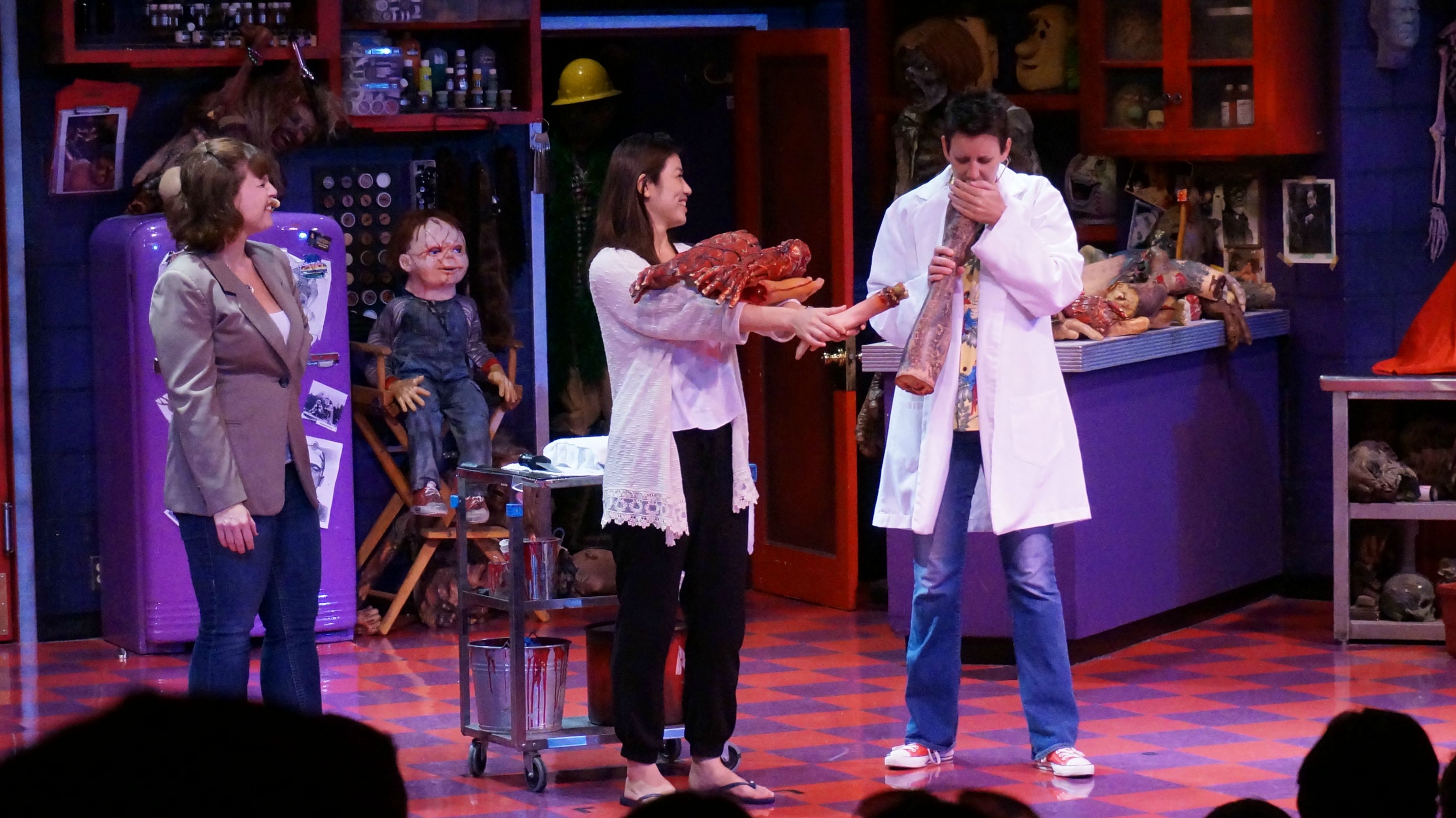 The cheesy lines, interacting with the audience (“This isn’t Disney. We don’t have to be nice to kids.”) and the surprise scare are excellent features of the show. 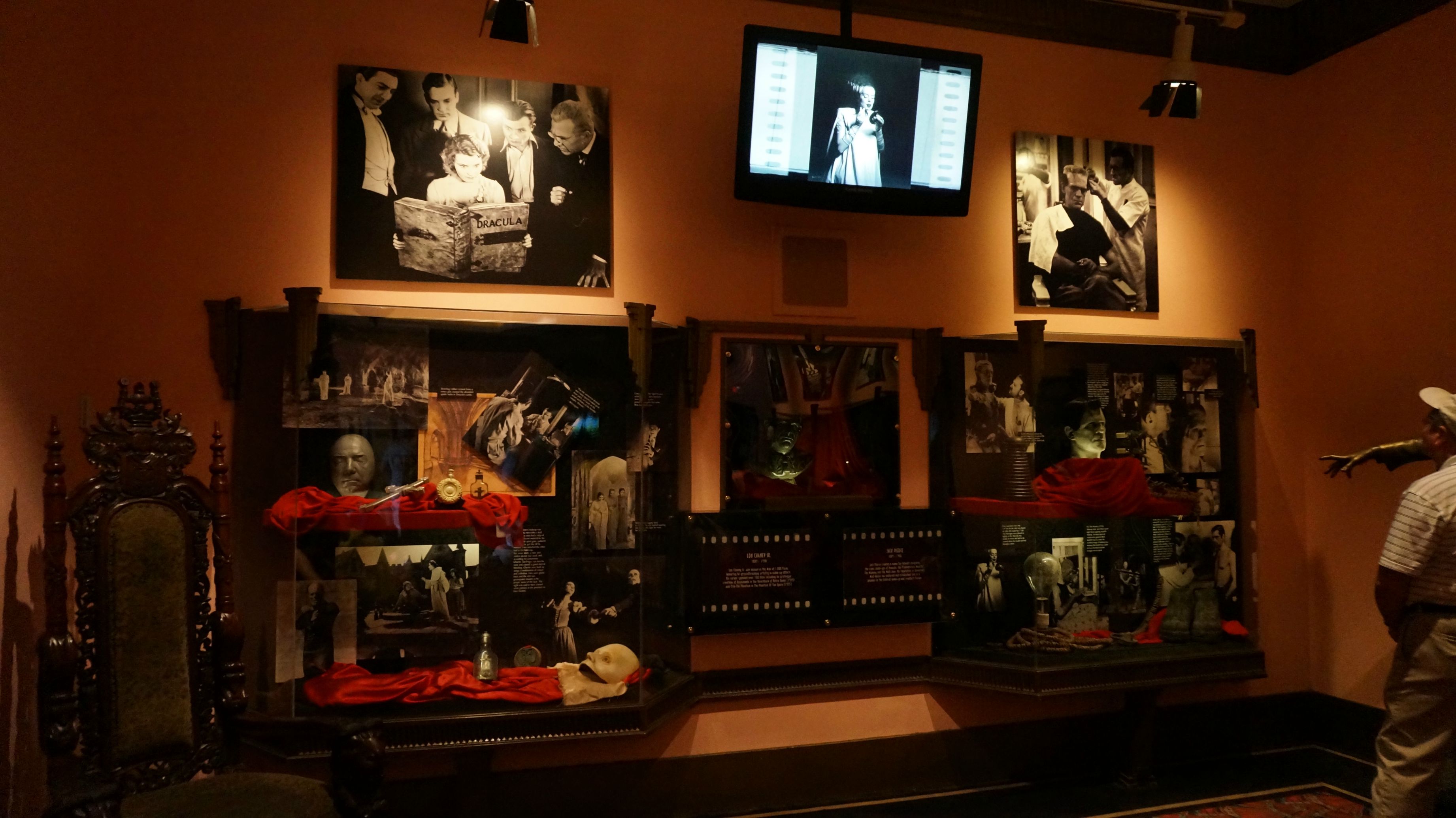 For more photos from the Horror Makeup Show, click on the link to the OI Gallery.

For lunch, I went to Fast Food Boulevard in Springfield and ordered a Krusty Burger with fries and a soda. With the annual pass discount, it was $13.12. 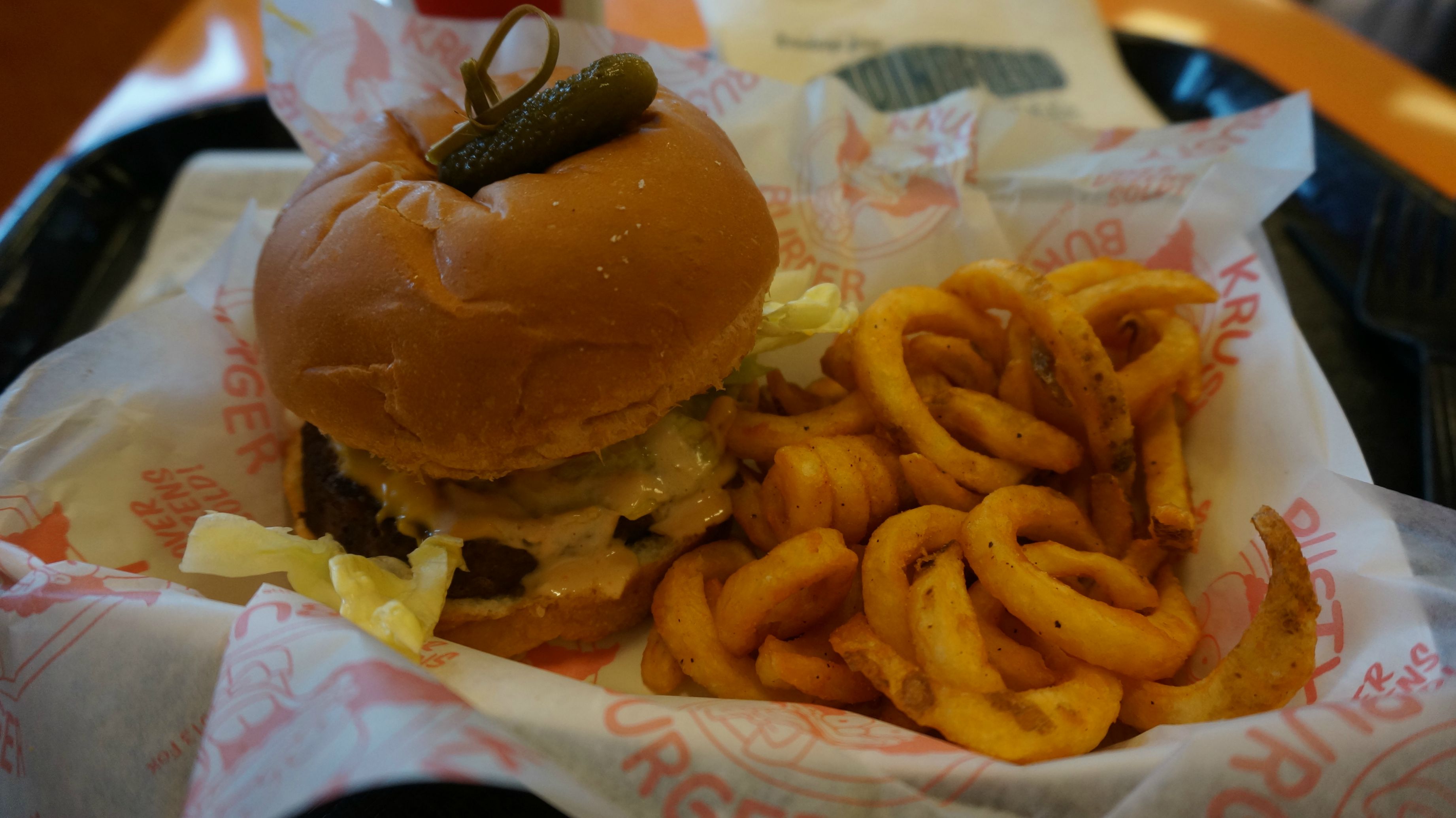 The burger was very filling and the curly fries were alright. Fast Food Boulevard has many culinary options to choose from including pizza, salads, wraps, and chicken and waffle sandwiches, which will surely satisfy the entire family. 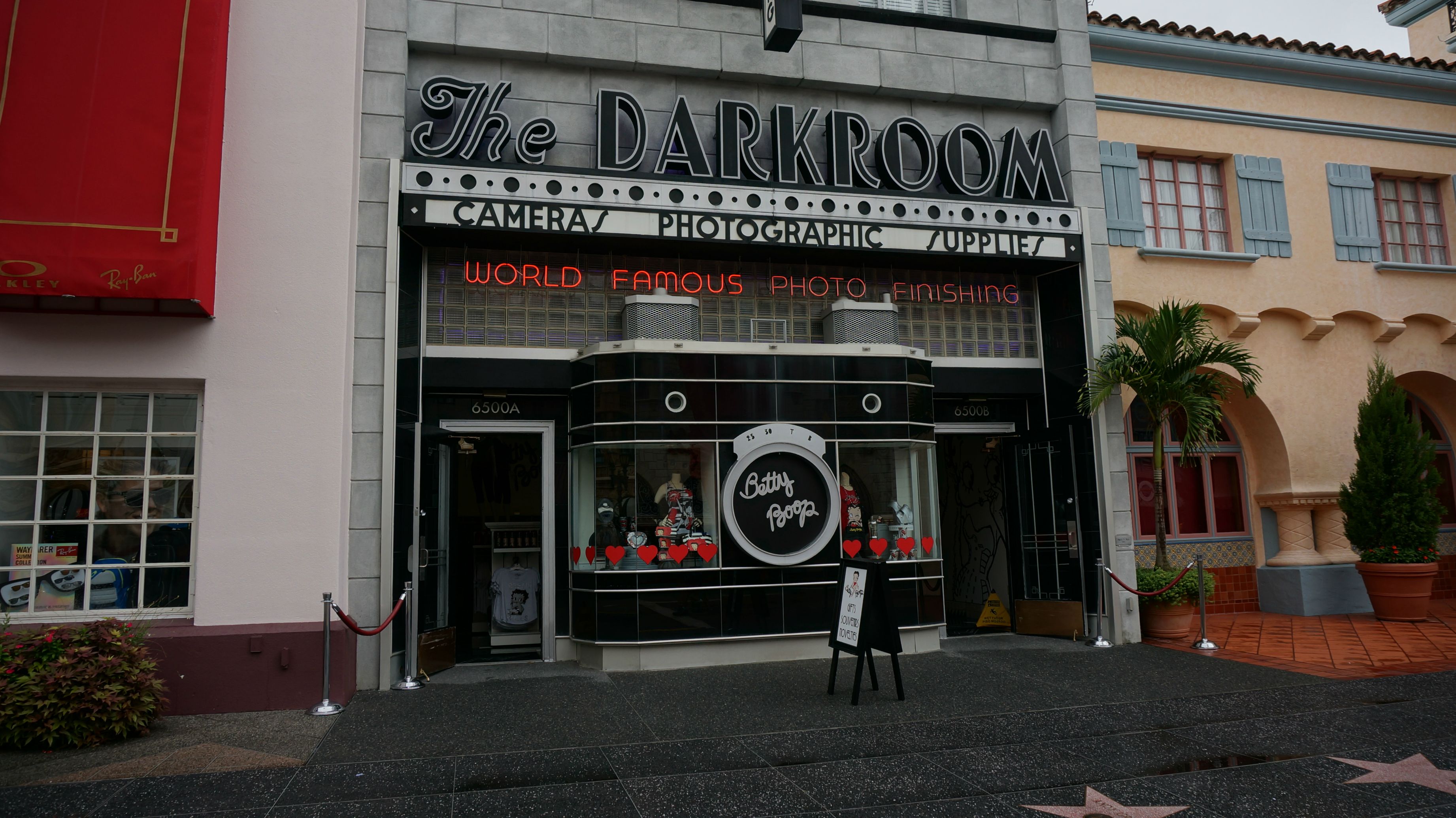 Since my last visit to USF, the Lucy exhibit permanently closed and the Betty Boop store moved to the Dark Room storefront on Hollywood Boulevard.

Disaster also permanently closed and will be replaced with a Fast and Furious attraction scheduled to be open in 2017. 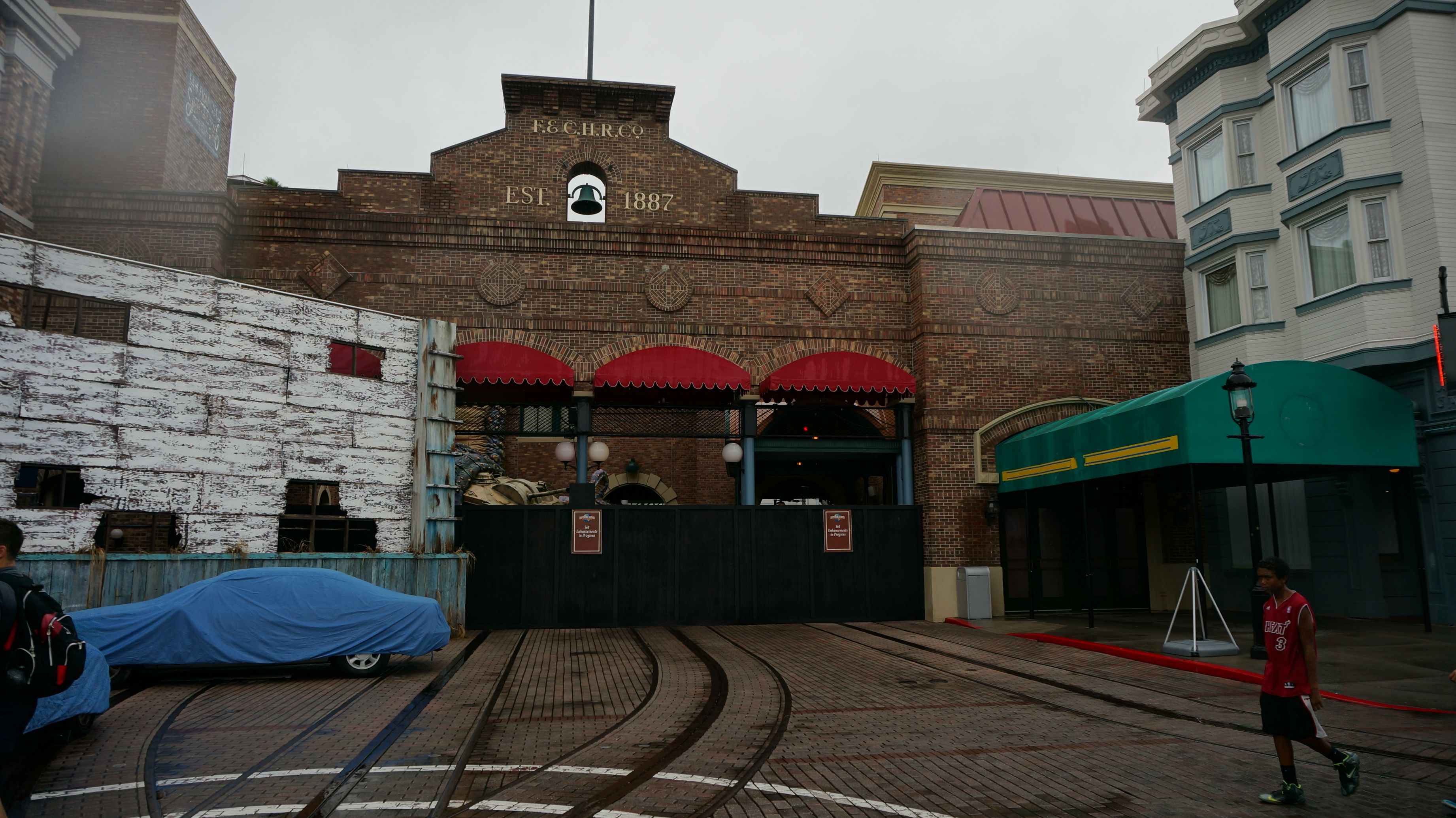 The following weekend, I visited Islands of Adventure (IOA) without my family again. This day was very warm with only a slight chance of rain and the crowd levels were low to moderate. 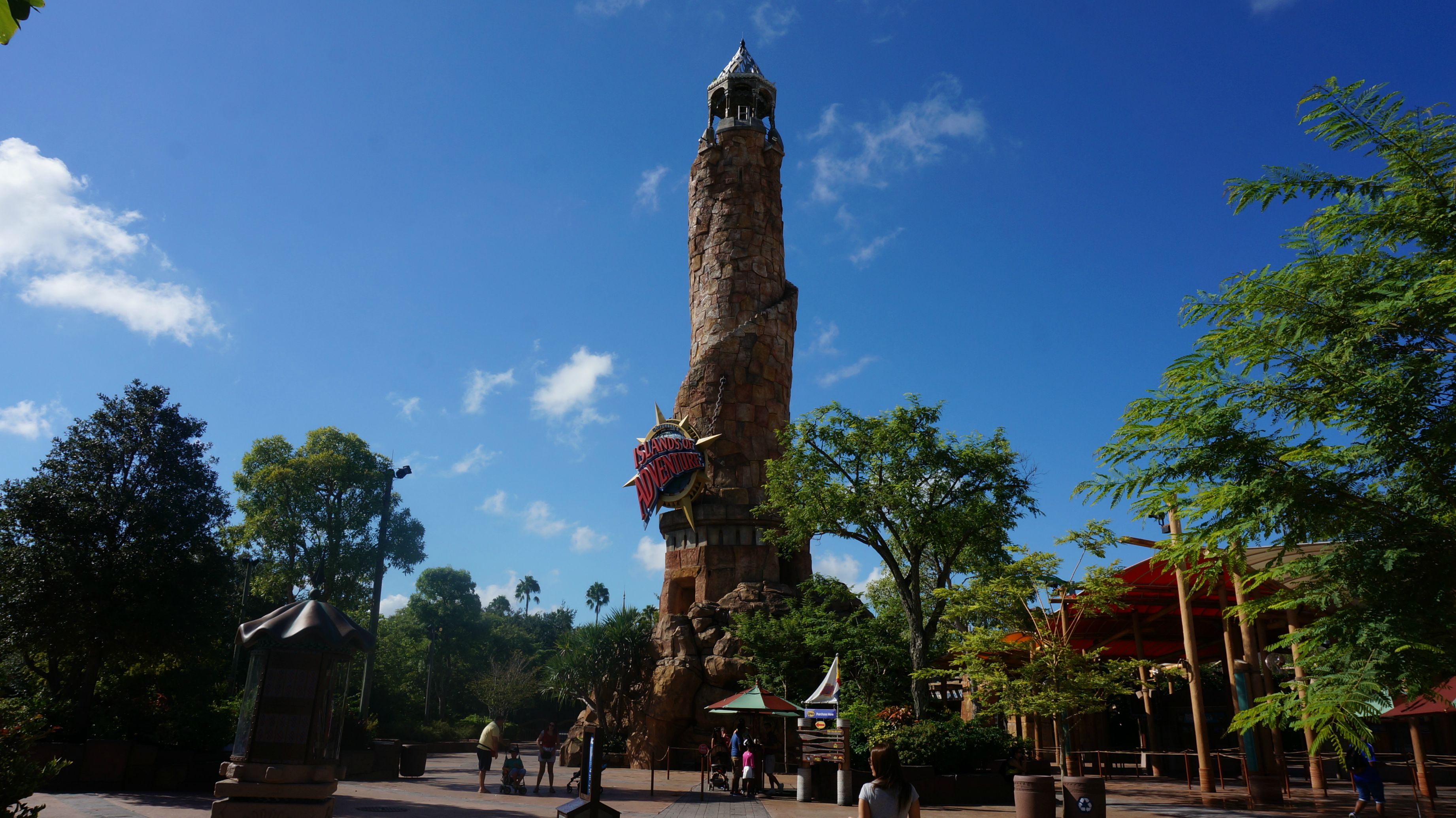 Walking to the entrance of IOA, I immediately missed the resounding and iconic roar of the Incredible Hulk Coaster. Since my last visit, this awesome coaster was closed for extensive refurbishment and will open again in the summer of 2016. Currently the construction walls surrounding the attraction are decked out with classic comic artwork. 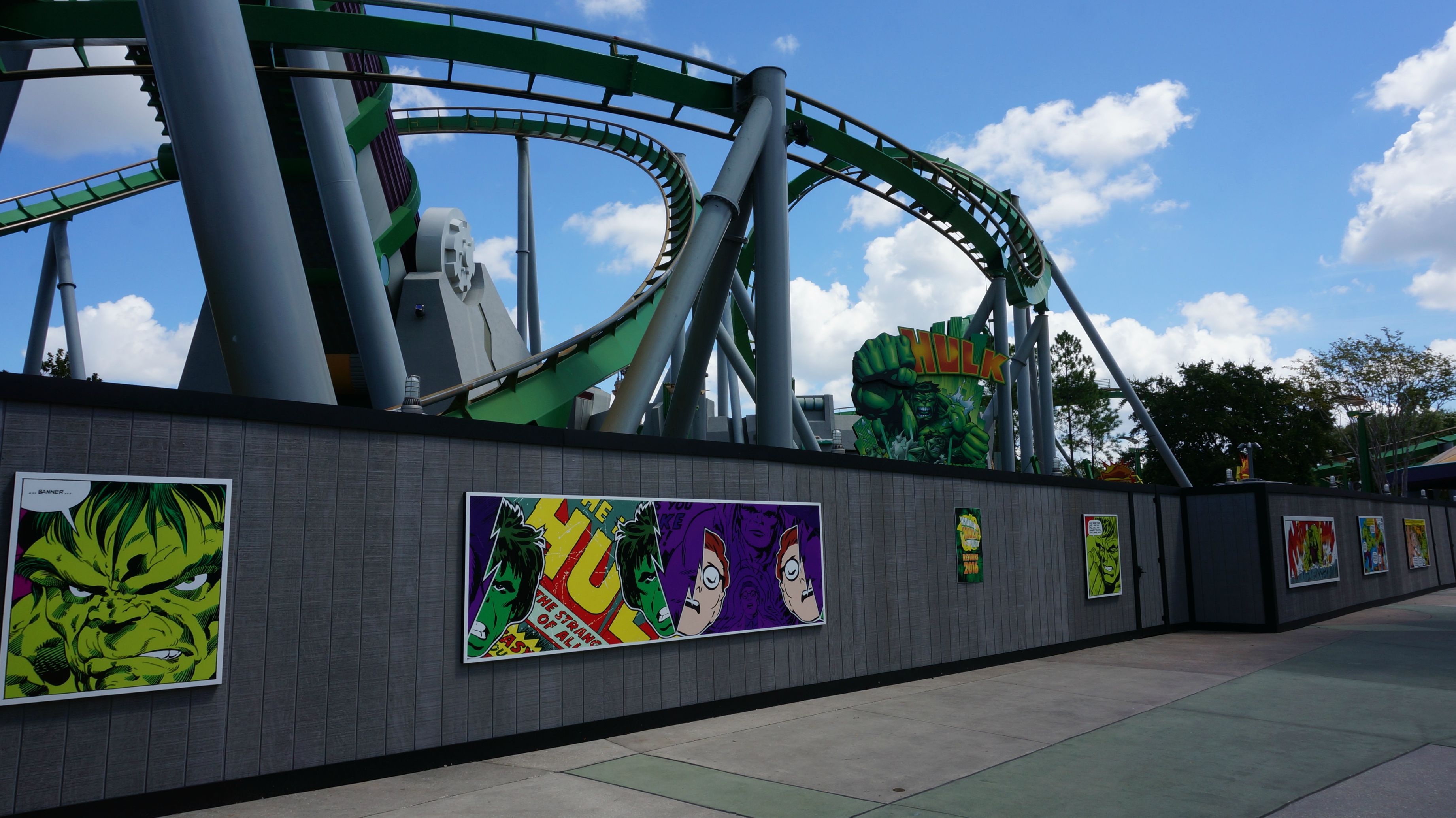 Also, the locker area next to the attraction has been converted to all day lockers in addition to cell phone charging lockers ($3 for two hours per cell phone locker). 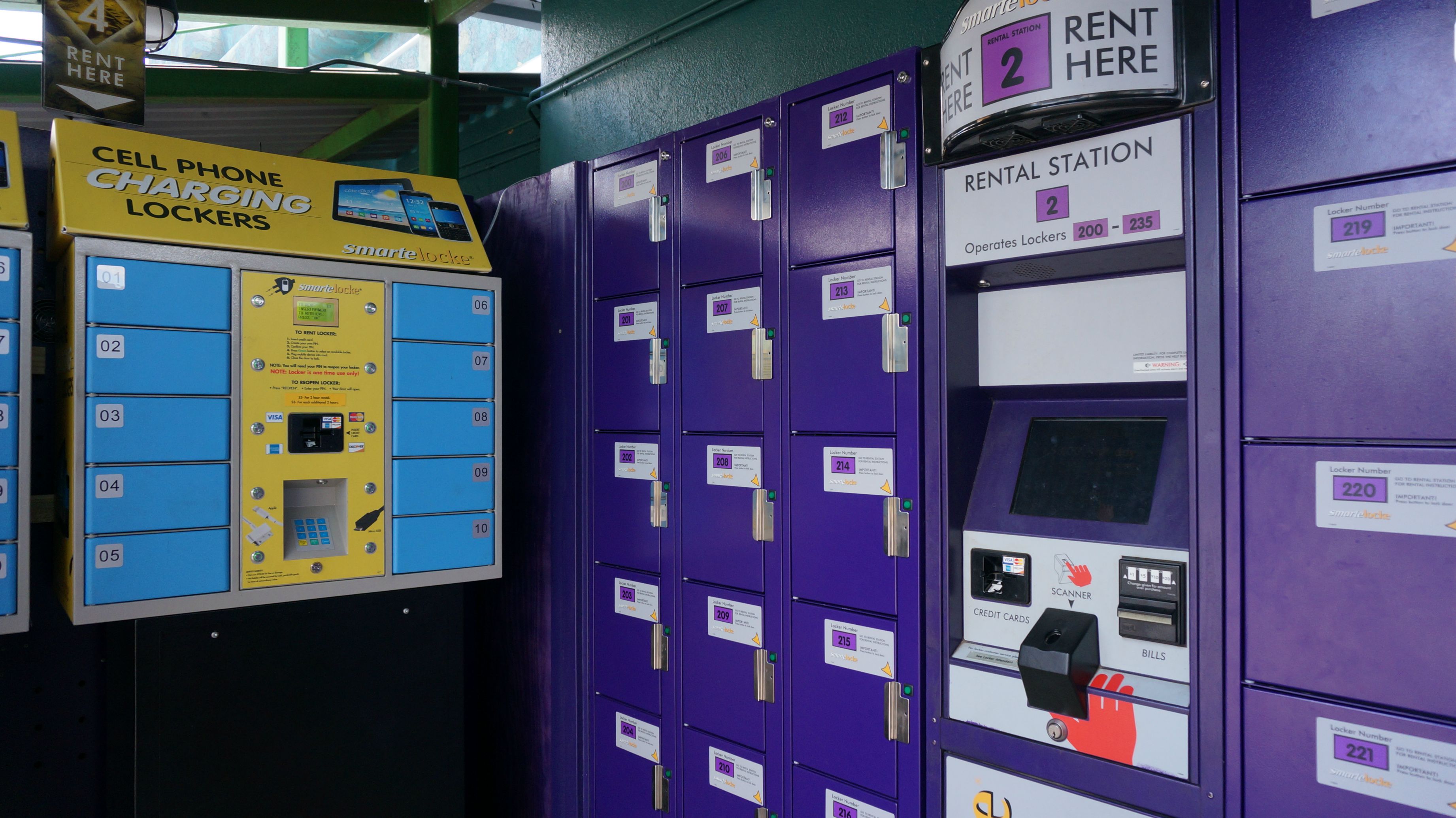 It was exciting to see the progress at Skull Island since my last visit. Prominent signs stating “Skull Island, Reign of Kong, Summer 2016” have been added to the construction walls along the walkway between Thunder Falls restaurant and Toon Lagoon. 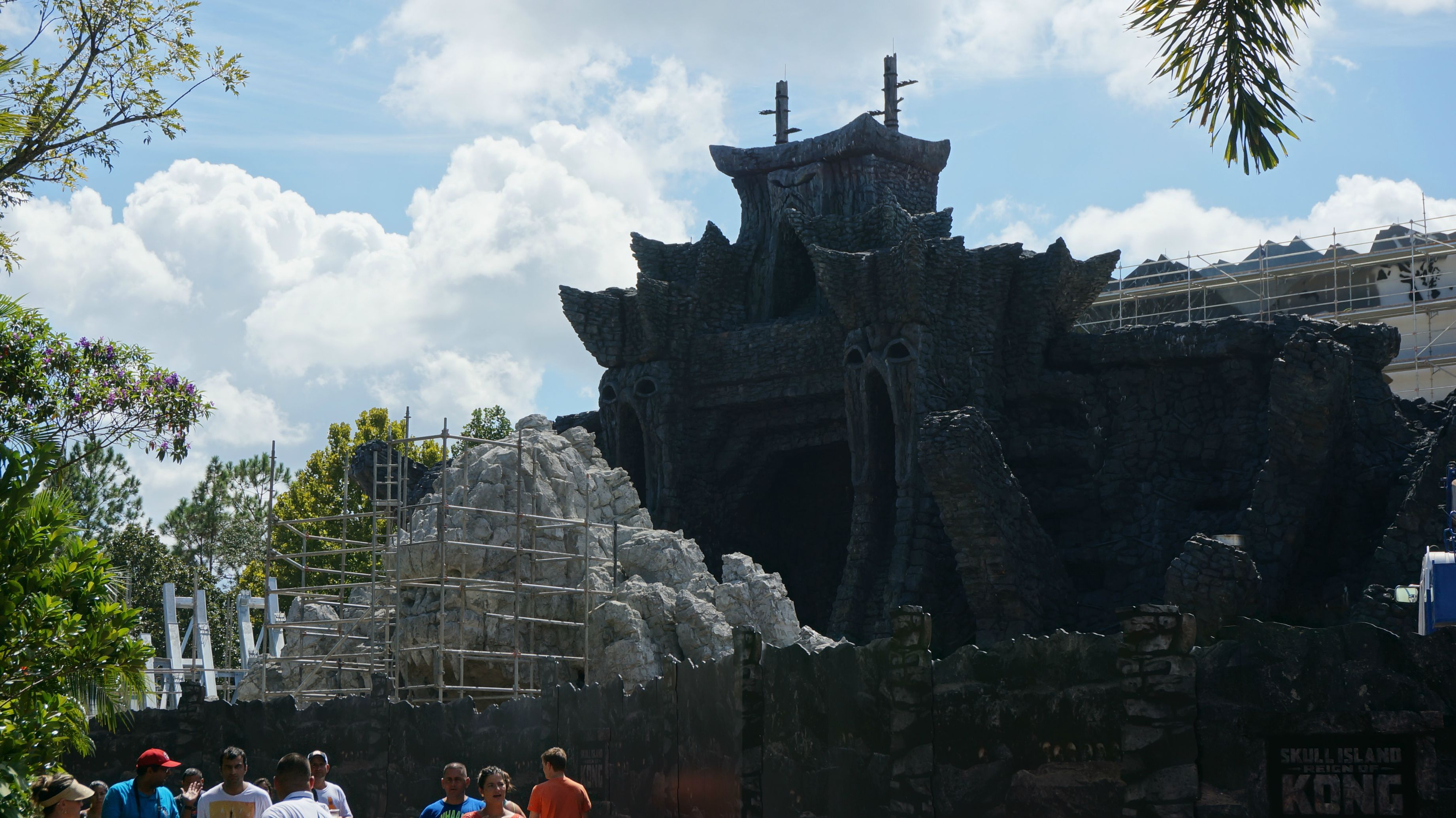 The massive and intimidating structures combined with the expectation that this attraction will be exceptional, increases my anticipation for its completion. 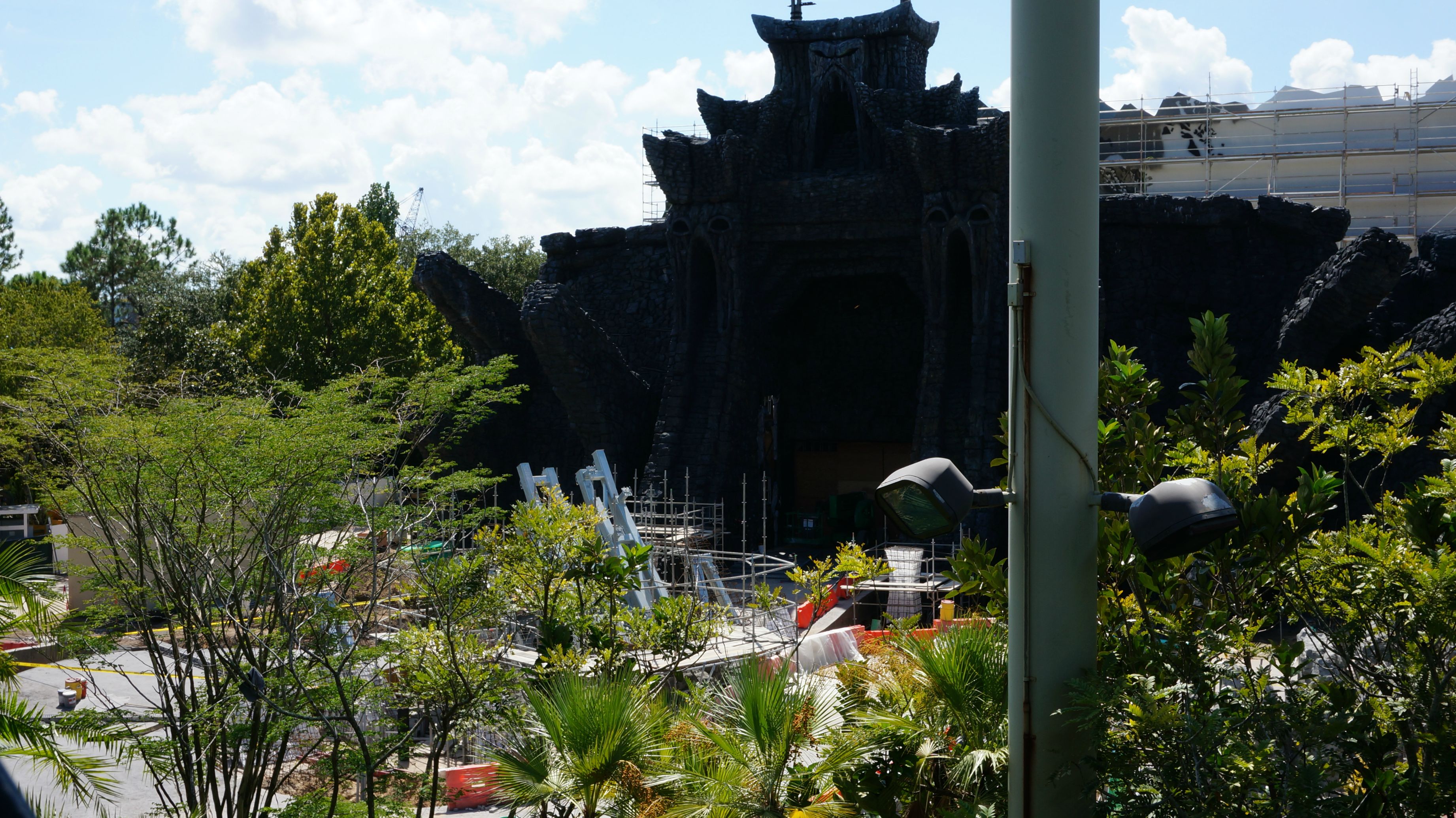 The posted wait times at IOA this day were reflective of the moderate crowds with 25 minutes for Spider-man, 45 minutes for Rip Saw Falls, Flight of the Hippogriff and Forbidden Journey 30 minutes. The remaining IOA attractions had posted wait times of less than 15 minutes. In Hogsmeade, I was even lucky enough to find a shaded bench to take a break which rarely occurs. 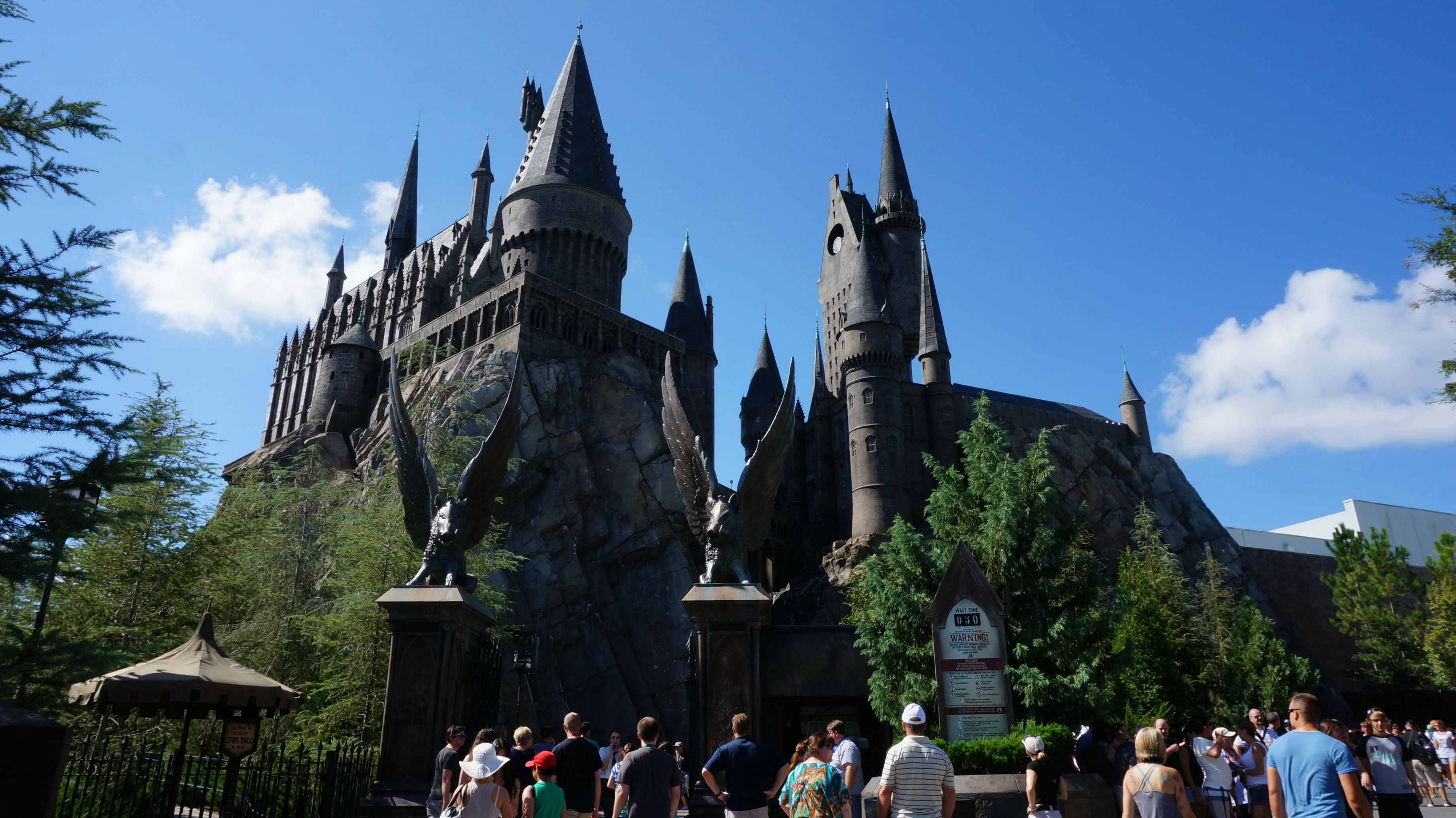 One advantage to visiting IOA on a day like this is the opportunity to ride attractions repeatedly. Taking in the antics of Thing One and Thing Two on the Cat in the Hat ride, getting soaked while swirling the rapids in Bluto’s Bilge Rat Barges, or experiencing the thrilling movements of Harry Potter and the Forbidden Journey are fantastic one time, but even more so if done repeatedly. 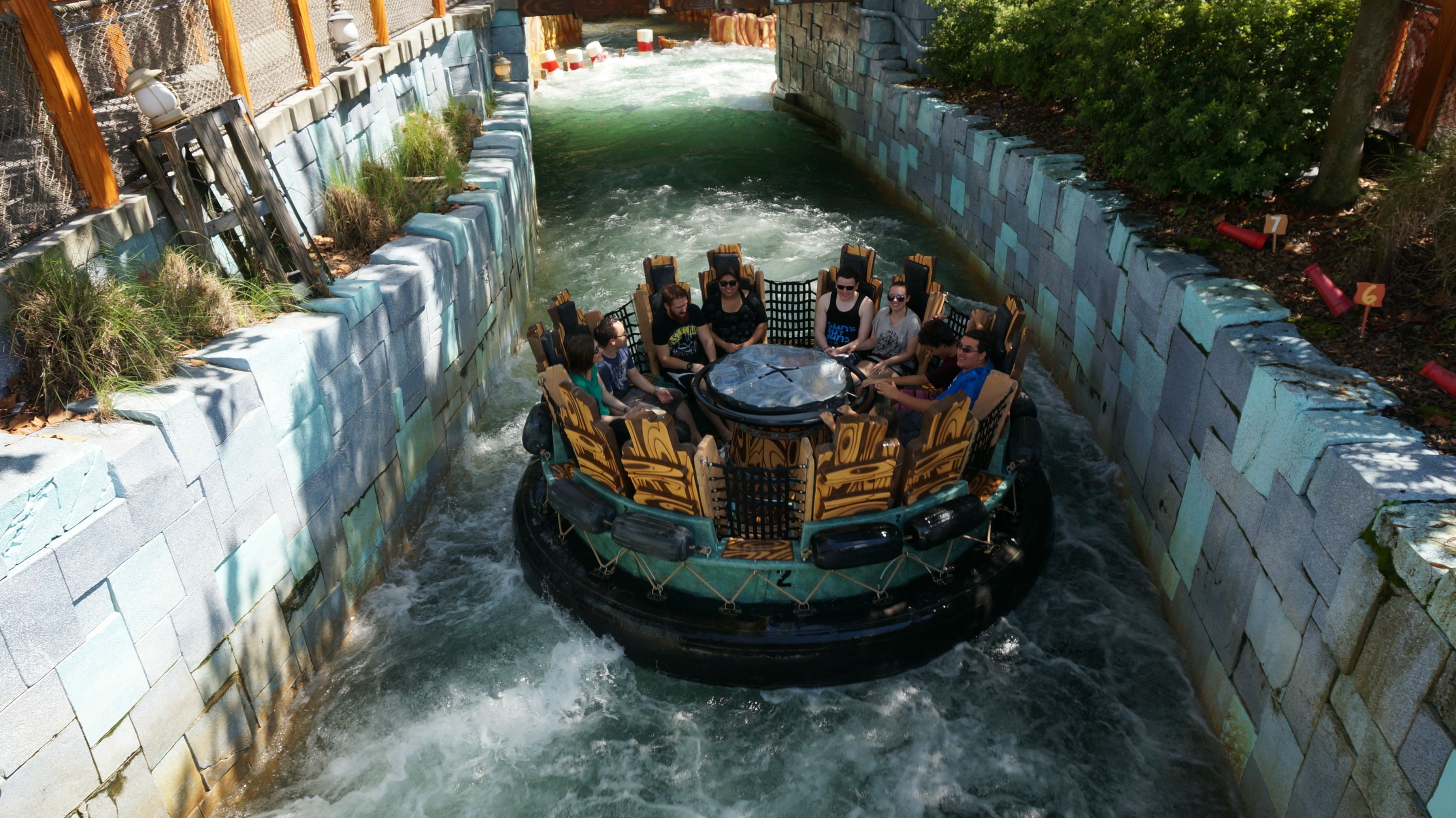 CityWalk continues to expand and change, I noticed the NBC Sports Grill and Brew looked almost completed. The monitors inside the grill and brew were on and construction workers appeared to be putting finishing touches on the huge outside screens. In additional, the NBA City restaurant has permanently closed, although there is no official word what will replace it. 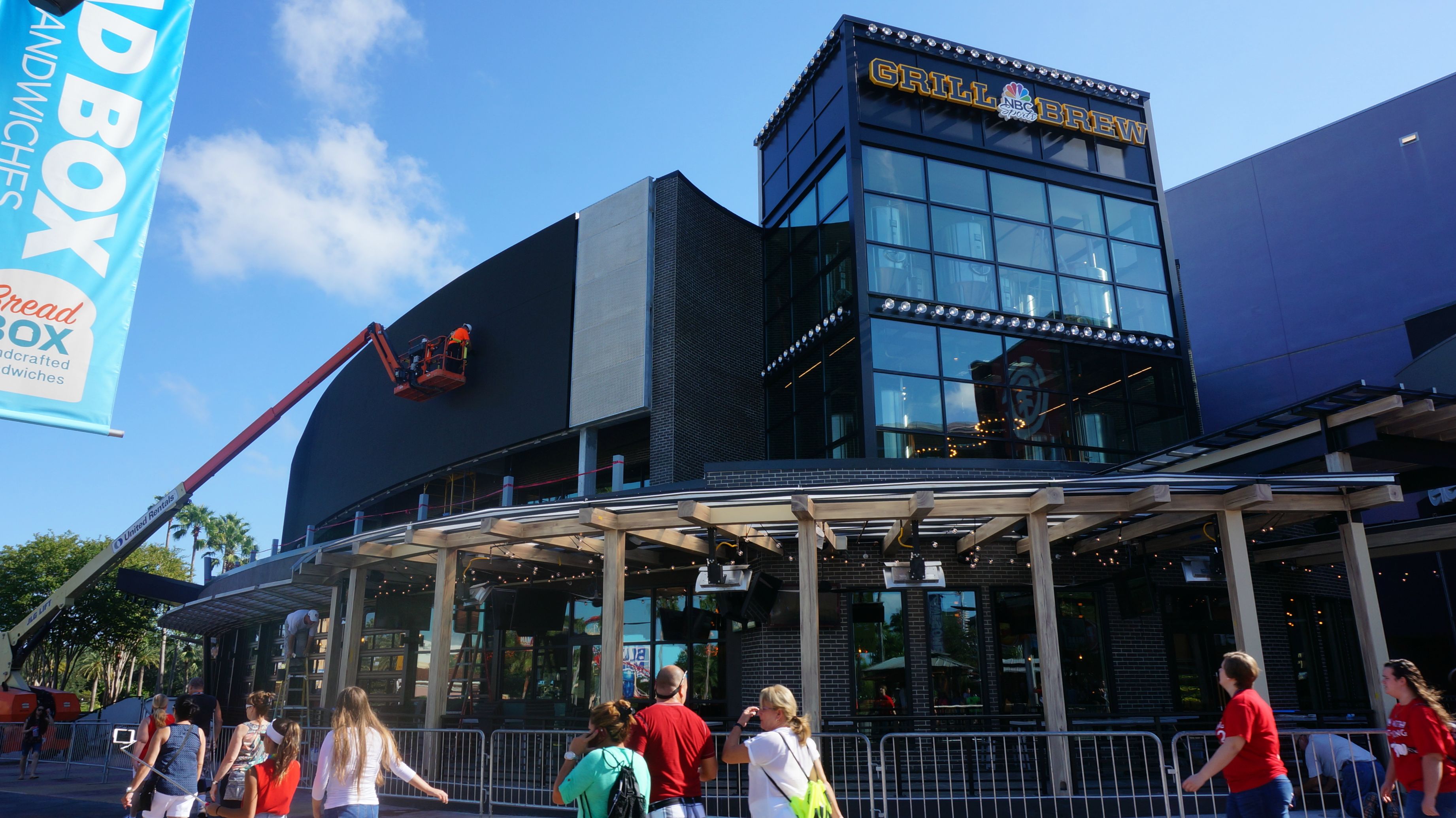 After my time spent at IOA, I decided to have a late lunch at Cowfish Sushi Burger Bar while I was in CityWalk. This visit was my first to the highly regarded addition to CityWalk and I was not disappointed. The menu featured a variety of choices including appetizers like Edamame and Parmesan Bacon Truffle Fries and entrees like sushi and half-pound burgers or unique combinations of both. 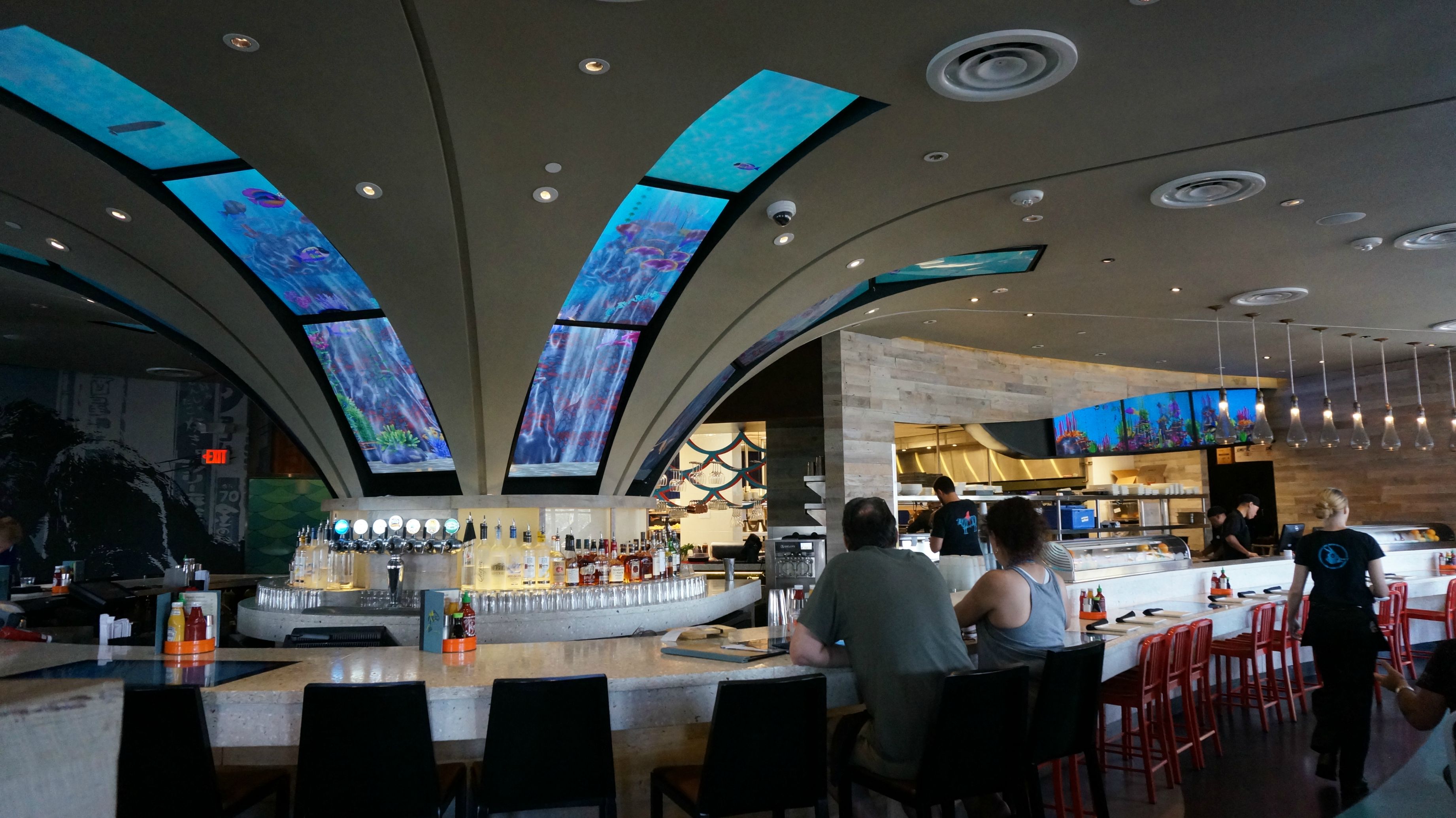 Also available were both alcoholic and alcohol-free milkshakes. Cowfish’s offerings would appeal to almost any palate. I ordered the Shroomin’ Swiss burger with fries and iced tea to drink. The burger was delicious and the fries could have been warmer. The service was excellent. With tax and tip, my meal was $22. I recommend Cowfish for guests vacationing at UOR. 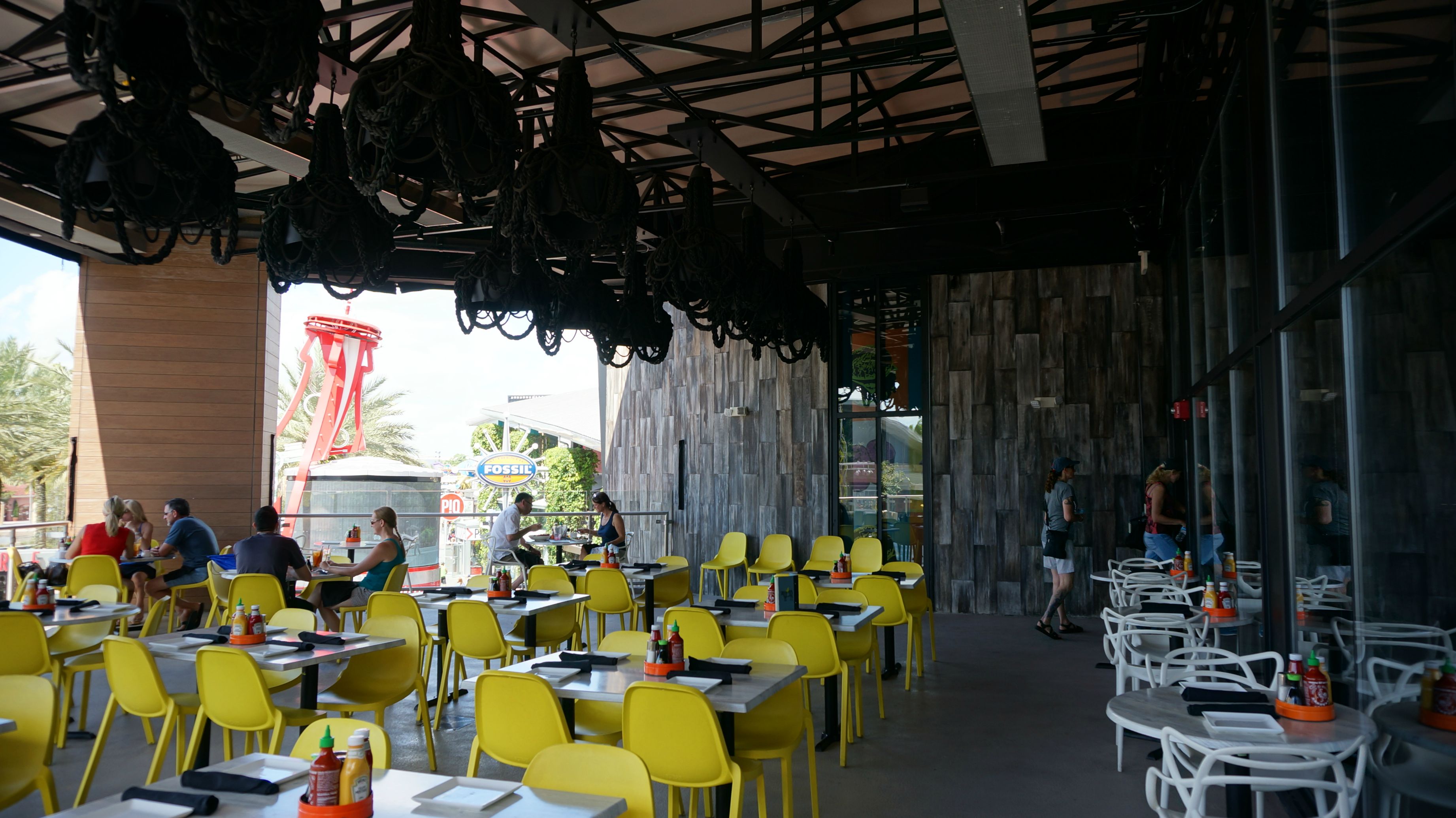 Visit the OI gallery for more photos from my September trip report.