This is a two-part article. To view the first part, click here.

Horizons, which bowed on October 1, 1983 – one year to the day after Epcot itself opened – quickly established itself as the park’s premiere attraction. In 1994, after General Electric opted not to renew its ten-year sponsorship contract, the ride was closed, only to be reopened sporadically over the course of the next several years. On January 9, 1999, the attraction closed for good; the following year, Disney tore down the pavilion – the first time that the company had ever outright demolished a show building in its then-45 years of theme park operation – and ultimately put Mission: Space in its place. Disney fans have never been the same since, consistently lamenting the ride’s closure and citing it as a symbol of what has befallen Epcot generally in the 30 years since its bright and optimistic (and Disney-character-free) beginning. 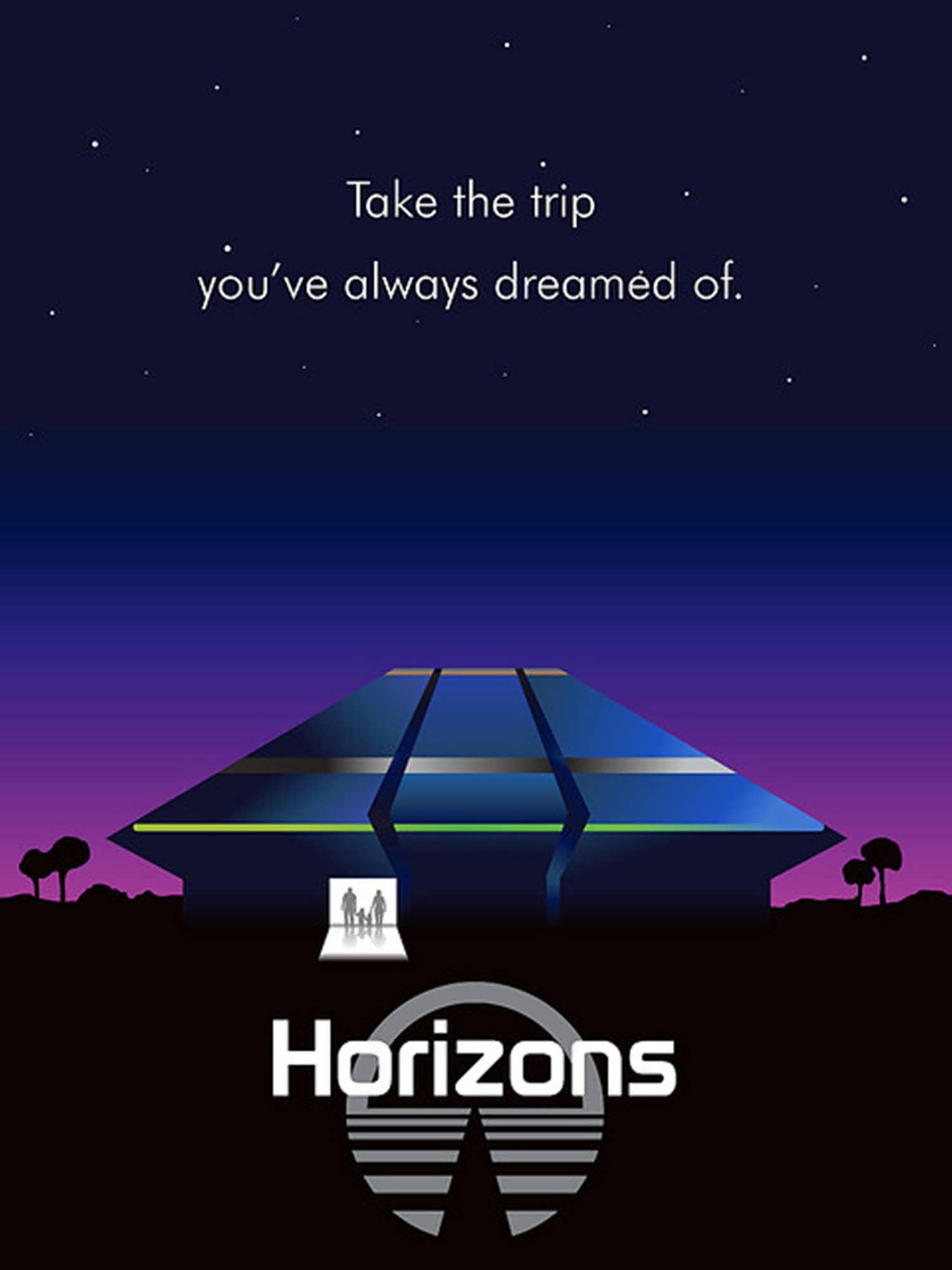 To chat about Horizons’s theming, history, and ongoing legacy – not to mention the still-lingering controversy over its demolition – a few notable names in the theme park world have been gathered and thoroughly debriefed.

Robert Niles got his start in the theming biz as a cast member (Disney speak for a park employee) at Walt Disney World’s Magic Kingdom from 1987 until ’91. For the past 13 years — since the time that Horizons closed, incidentally — Robert has been the editor-in-chief of Theme Park Insider, a leading site on the subject. (He’s also the author of Stories from a Theme Park Insider: Working Inside the World’s Most Popular Theme Park, which combines his experiences and his articles into one nice little package.)

Chris Wallace is on the other end of the spectrum. A designer, technologist, and entrepreneur who got his start by falling in love with Disney and its films and parks, he co-created The SuperGroup, an interactive design and digital promotions agency, and has now decided to take his talents and apply them to recreating Horizons in its entirety as a simulation using the Unity engine. His ongoing efforts are chronicled at Horizons: Resurrected.

Why is Horizons considered to be the best Disney attraction?

Fans loved Horizons because it was one of the first interactive theme park attractions, in that you had a choice during the ride which “path” to follow. And, like Haunted Mansion, a ride built on the same ride system, it was a very personal experience — with a narrator seemingly talking to you personally. That helped people to feel an individual connection with the ride.

Generally speaking, because it built upon all of the elements that have made other classic Disney attractions so successful and beloved. Rather than providing a quick thrill or piggybacking off of an associated movie franchise, Horizons told a unique story and brought people to truly unique places. Just like Pirates of the Caribbean or The Haunted Mansion, Horizons placed guests into a believable and captivating world that they wanted to revisit over and over again.

Do you hold it in such high esteem?

Well, my favorite “deceased” Disney attraction remains Disneyland’s Adventure through Inner Space, if for no other reason that it was the first ride I remember as a child. But Horizons was a delightful updating of the concept behind the Carousel of Progress, and my favorite of all the now-closed Walt Disney World attractions.

In my opinion, EPCOT as it was originally constructed was the most evolved and sophisticated of the Disney parks, because it went beyond the realms of fantasy and simple entertainment. Instead, EPCOT was grounded in reality and strove to inspire a better — and attainable — future. That optimistic viewpoint was most fully realized in Horizons, as it was a synthesis of every other theme represented in Future World. To put it simply, Horizons was awe-inspiring, and although some of its “predictions” may have seemed outdated in its later years, it was always successful at conveying excitement and wonder at what tomorrow may bring. In fact, it doesn’t matter whether Horizons presented a vision of the future that was accurate or subjectively “current” — the underlying message was that the future can be whatever we make it. “If we can dream it, we can do it.”

Why has Horizons lived on so fervently? Is it more of the ride specifically, or has it become something of a symbolic touchstone?

I think it’s the personal connection that people felt with the ride — the narration, the interactivity, the sense it fostered that the future was something you could control, and literally did on the ride. That’s so reassuring, especially when the future seems so perilous to so many so often.

I think it has to do with what in Portuguese is called saudade. Wikipedia describes it as “a deep emotional state of nostalgic longing for an absent something or someone that one loves. It often carries a repressed knowledge that the object of longing might never return. It’s related to the feelings of longing, yearning.”

For many, Horizons itself is associated with many beloved feelings of nostalgia, but it’s also closely tied to the nostalgia for EPCOT as a whole, as it once was. I think these feelings are compounded by the fact that hardly any trace of Horizons still survives – the show building was destroyed completely, and many modern guests are unaware that it ever existed. Like any other “lost wonder,” the fact that it’s lost is part of its fascination.

What is the one scene or detail that embodies the attraction’s overall narration or ethos?

Well, the obvious choice would be that moment when you got to choose between space, sea, and desert. But there was also a scene in the attraction that cast members couldn’t get enough of — mostly thanks to some potentially racy double-entendre in the dialogue.

I’d have to say the space colony scenes. To see people living and thriving in space, not simply exploring it, gave people the feeling that if we can do that, just imagine what else we could do. As one of the final scenes, it drove home the point that there is truly no limit to what we can achieve as a species. 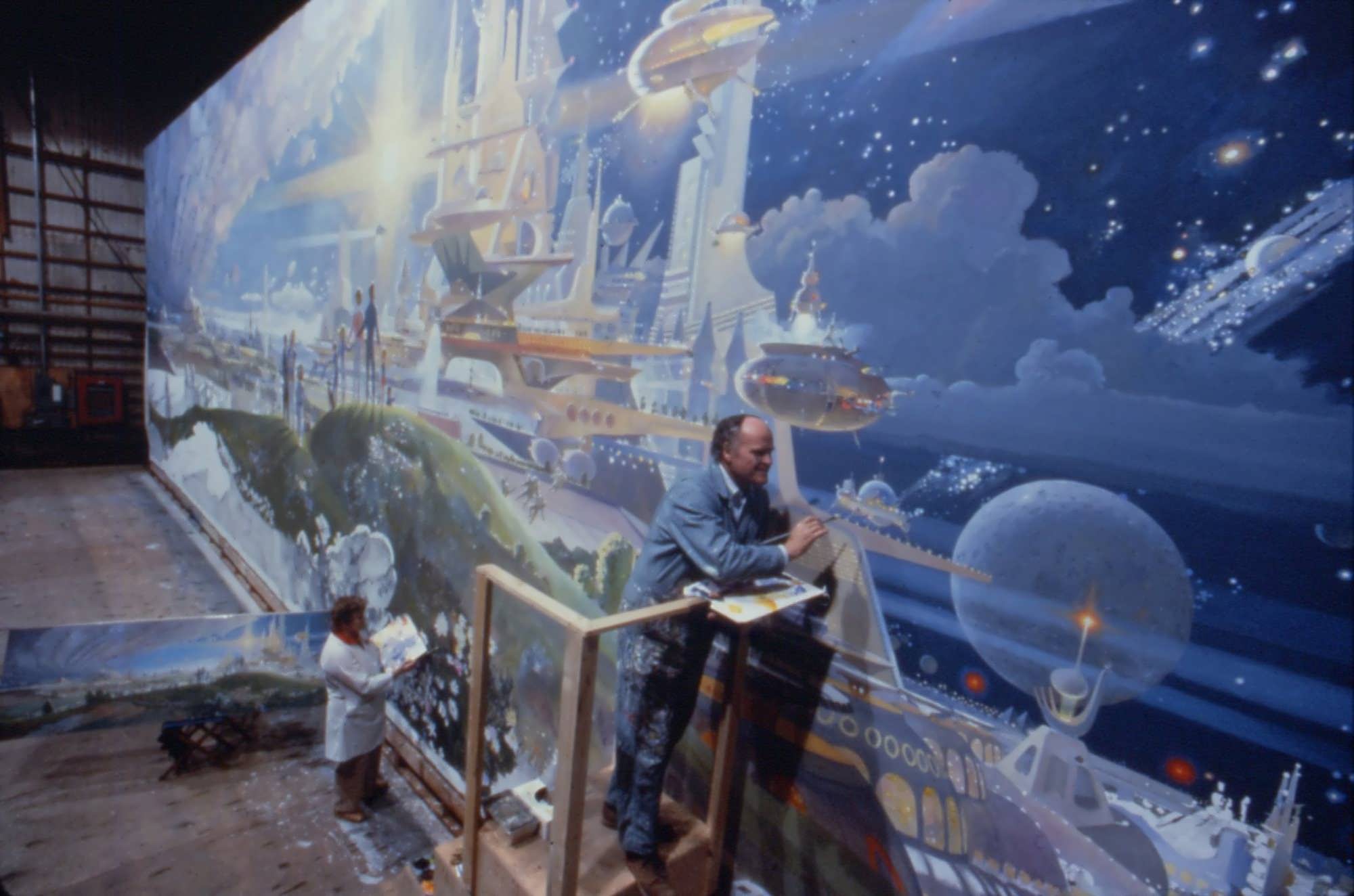 Do you know why the pavilion was closed? There seems to be conspiracy theories abound on the net…

Forget the conspiracy theories. Horizons closed because of one word: money. After GE dropped its sponsorship, Disney didn’t have enough of it coming in, and maintaining a ride that large with diminishing visitor counts meant Disney was spending too much for the worth it was bringing back to the company. So Disney made the decision to ditch it in favor of a shiny new Space ride instead.

Even if Disney had wanted to keep Horizons, attractions about the near-future become cheesy and out-of-date within just a few years. Since Disney was facing a rewrite and redesign of the attraction anyway, it made the sensible decision to go with a big change that might draw in huge new crowds instead of settling for a modest change that probably wouldn’t have moved the turnstiles much.

I don’t think there’s much validity to the conspiracy theories. The answer is a simple one: Horizons closed because it lost GE as a sponsor. As a 15-minute-long dark ride that was starting to show its age, I think there was a perception within the management of the time that modern audiences wanted more “thrilling” experiences, and so the decision was made to build an entirely different ride experience to replace Horizons and attract new sponsors. In this regard, I think they were successful and Mission: Space is an attraction that I do enjoy. However, it doesn’t inspire me – and that feeling is one that I know is sorely missed by many.

Epcot has changed considerably since October 1st, 1983. What has happened to the park?

I think that Disney’s stripped much of the “future” from Future World, which really doesn’t look forward anymore. Part of that is the inherent problem in keeping a look toward the future up-to-date. (After all, the future has this habit of actually getting here, no matter what, unlike Fantasy, Adventure, or Frontiers.) It’s kinda sad that the most popular ride in “Future” World is the Soarin’ travelogue from California Adventure. Instead of inspiring you to look hopefully to the future, that film’s grand-finale message is “Wouldn’t you rather be over having fun on Main Street USA?” Sigh.

On the other side of the lagoon, I’d argue that not enough has happened in World Showcase, which hasn’t added a new land in decades. Disney’s been relying more on special events, such as the Food and Wine Festival, to energize Epcot. And while those are fine events, with many fans, it’d be nice to see Disney do more to create ongoing new adventures inspired by places around the world that most Disney World visitors will never get to see in person for themselves.

That said, the France movie remains awesome and its music, flawless. Go see that, then get a French pastry afterward. So long as you can do those things in Epcot, the park will be fine.

Unlike the Magic Kingdom, EPCOT never had a younger “sister park” like Disneyland that was rooted in nostalgia and historically protected by Walt Disney’s direct creative involvement. Instead, everything about EPCOT was new and, as a result, subject to the types of changes that occur when decisions are made by executives rather than visionaries. Riding the coattails of Walt Disney’s original (and incomplete) vision for his “Florida Project,” it’s amazing that EPCOT was ever built at all. But since its opening, there have been no sacred cows – no untouchable, tenured attractions. So EPCOT has changed dramatically over the years, and the sheer number of people involved in those decisions has grown considerably. The result is that EPCOT’s original cohesive message and theme have been slowly eroded by franchise tie-ins, budgetary cutbacks, and “dumbing down” of the educational elements. Today, there are certainly more thrills and more references to characters and films that first-time guests may be already familiar with, but I dare say there are fewer kids leavings the gates at night and dreaming of the future.

To return to part one of this article, click here. Otherwise, please take a moment to enjoy my favorite Horizon YouTube video. It’s actual animation from the ride, and it immediately takes me back to when I was 11-years-old, riding that attraction with big saucer-eyes.

Still sad that Horizons and its like are long gone from Epcot? Still hopeful for the park’s future? Be sure to share your thoughts below.