In a completely surprise development, Comcast Chief Financial Officer Michael Angelakis casually mentioned on an earnings phone call this morning that King Kong is, indeed, returning to Universal Orlando Resort, marking the first time that either Universal or Comcast (the parent company of NBCUniversal) has officially commented on the property.

What exec said (shorten): "… as we continue to invest in attractions, inc. Potter and FastFurious in HWood King Kong attraction in Orlando

While it is exciting to have confirmation, no details – unfortunately – were offered on the call, leaving us still mostly in the dark on the King’s repeat appearance. Still, given that construction has been ongoing for nearly the past year and that rumored information was being leaked for nearly a year before that, we have a pretty good idea of what to expect.

To sort through it all, we’ve compiled a general primer on what will be Universal Orlando’s next big E-ticket experience, which we’ll continue to update as more information is officially announced or otherwise confirmed.

The basics
What has been officially confirmed by Universal?

Not much – only the fact that the new King Kong attraction is currently being built.

What is the ride called?

We don’t know. Rumors have it pegged as anywhere from Revenge of Kong to Kong: Skull Island (more on that in a moment).

Where is it located?

In Islands of Adventure, sandwiched in between Jurassic Park and Toon Lagoon. 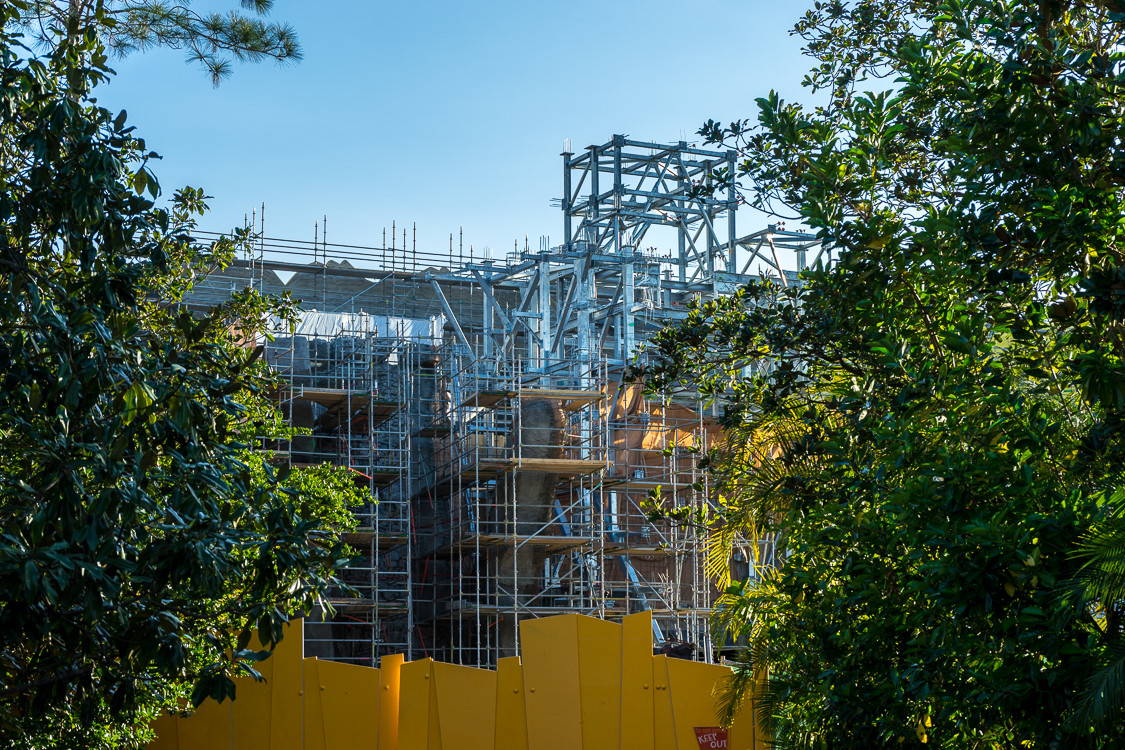 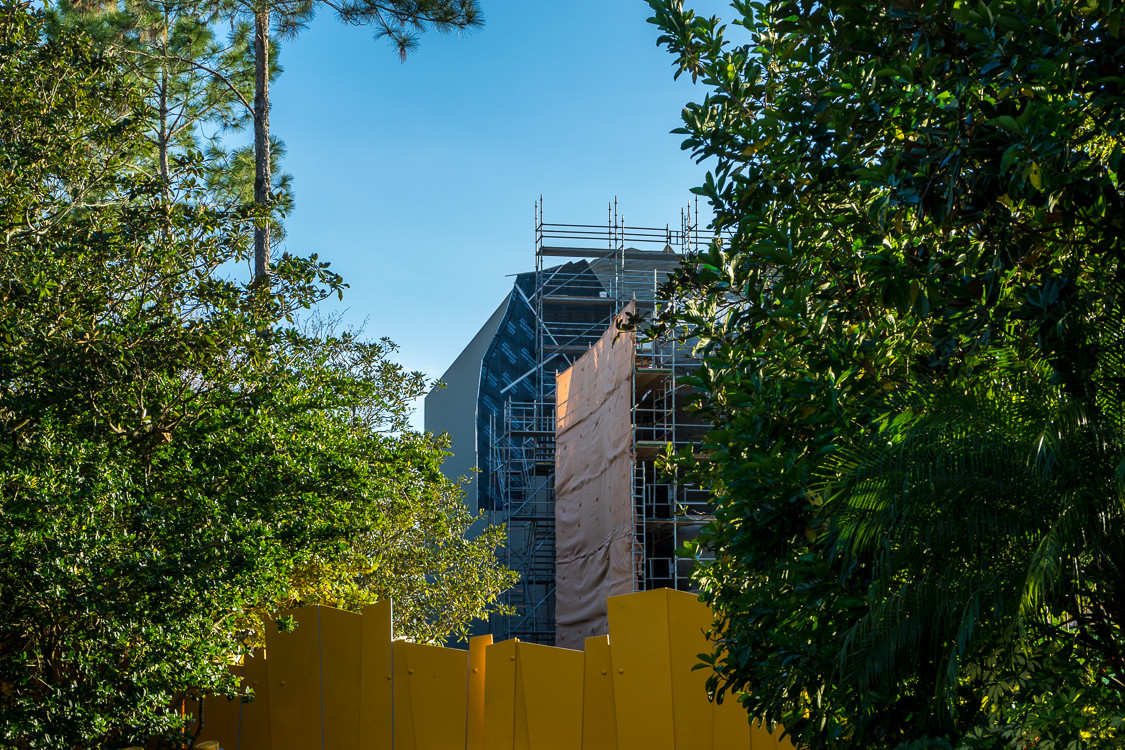 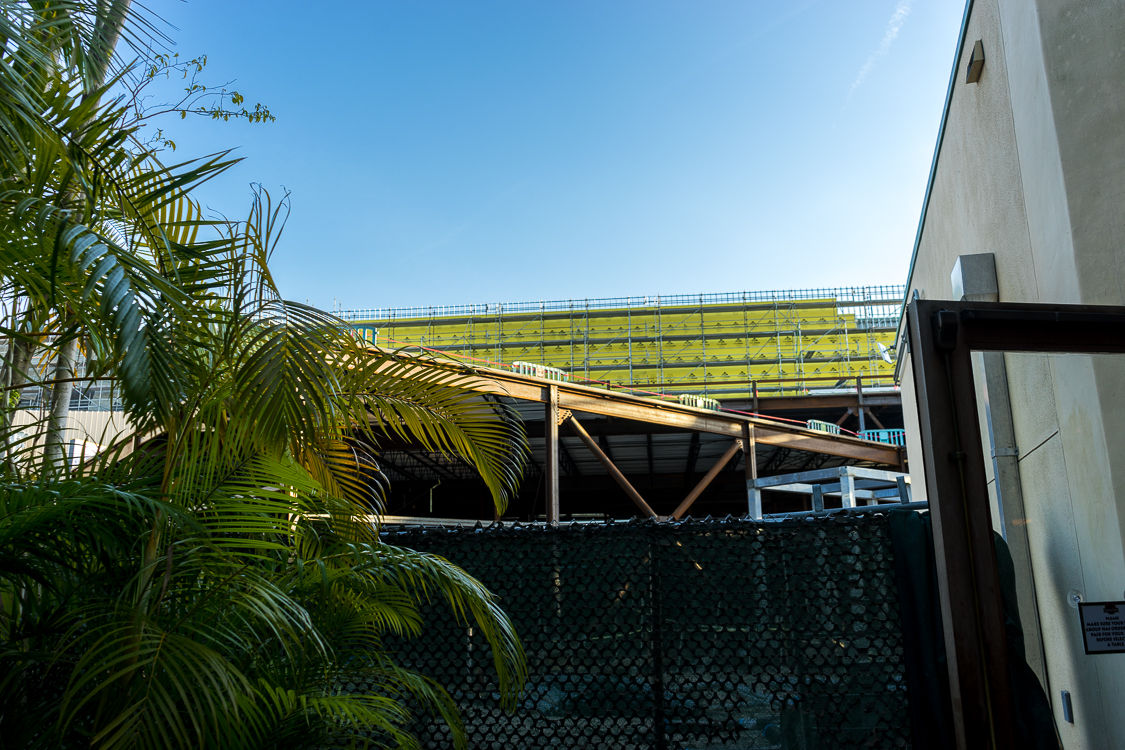 When will it open?

2016, most likely in the summer, when new rides typically debut (in order to meet the high traffic of the summer crowds). Some leaked information seems to suggest that Universal may have initially wanted the attraction to bow this year – which would explain the crazily expedited pace of the new “island’s” construction thus far – but it’s definitely been pushed back since then.

What is the ride’s premise or story?

Again, while nothing official has been revealed, there have been plenty of rumors over the past two years (or so) that get into some amazingly specific details of King Kong’s façade, queue, and, even, ride experience (thanks in part to its blueprints having been leaked some time ago). We’ll be sure to add some of these details to serve as a type of sneak preview as and when we can.

What’s this I hear about Kong: Skull Island?

Legendary Pictures, the studio behind the recent Godzilla reboot, is currently in development on a brand-new King Kong film that will act as a type of prequel or origin story for the mighty ape. Here’s the official synopsis:

Directed by Jordan Vogt-Roberts (The Kings of Summer) and written by John Gatins (Flight) and Max Borenstein (Godzilla), Kong: Skull Island will fully immerse audiences in the mysterious and dangerous home of the king of the apes as a team of explorers ventures deep inside the treacherous, primordial island. Legendary’s story honors the foundations of existing King Kong lore, but places it in an entirely new, distinct timeline.

After originally being announced last year for release on November 4, 2016 (the same day as Marvel’s Doctor Strange), Skull Island has since been delayed to March 10, 2017.

While there is no indication that the new movie will correlate with the new theme park attraction – the move could simply be a piece of multimedia marketing synchronicity, a practice which Disney engages in literally all the time – there may very well be some crossover, including the time period (the 1970s) and the cast (Tom Hiddleston [Loki from the Thor series], J.K. Simmons [J. Jonah Jameson from the first Spider-Man trilogy], and, very likely, Michael Keaton [Batman]). 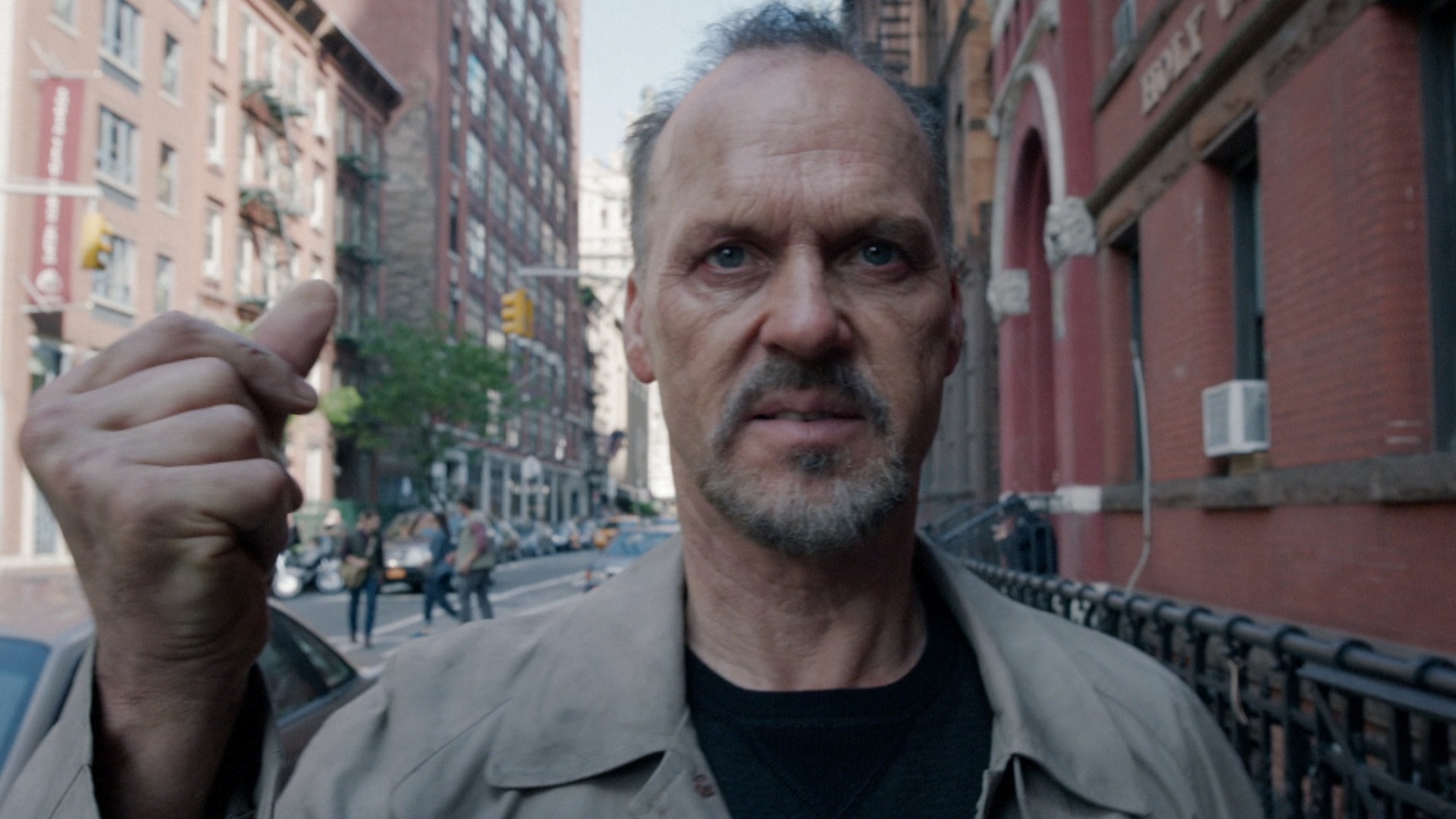 The history
Yes, this will be Universal’s fourth(!) iteration of the King, but, no, Skull Island won’t have anything to do with any of its predecessors/counterparts.

King Kong Encounter, located at Universal Studios Hollywood, was the progenitor, opening in 1986 as part of the park’s famed Backlot Tour and running for the next 22 years, until a three-alarm fire broke out and destroyed the soundstage the attraction was housed in.

In this version of the Kong experience, passengers brushed past a 30-foot-tall (and seven-ton) King Kong animatronic that shook the bridge their tram was attempting to escape out on. It was brief (much like other stops on the Backlot Tour, especially at the time) but also technically impressive – and essentially was the ride that gave birth to all the other Universal theme parks, as the company realized that it was finally playing at the level previously and exclusively reserved to Disney.

Kongfrontation, based upon the 1976 remake, came next, opening with Universal Studios Florida in 1990. Essentially an expanded version of Hollywood’s attraction, it took the singular run-in with Kong and expanded it to two even more gigantic animatronic figures – replete with authentic banana breath – and a plethora of special effects, ranging from erupting fire hydrants to exploding helicopters. (The king of the apes also picked up and slammed back down the ride vehicle, allowing for a little more in the way of thrills.)

Kongfrontation would last for 12 extremely popular years before it fell victim to Universal’s self-imposed constantly-refreshing-the-park’s-lineup mandate, being vacated to make way for another classic, Revenge of the Mummy.

(Sorry you missed the cult-favorite Kongfrontation? Fret not – YouTube is here to help fill the void. Check out this comprehensive, 30-minute long video tribute below.)

Most recently, in 2010, King Kong: 360 3D opened to replace the destroyed King Kong Encounter on USH’s Backlot Tour. Using the over-the-top action sequences of Peter Jackson’s 2005 remake, this version deploys a wide array of practical effects – air and water blasts, for instance – in conjunction with 3D film footage to replicate a dinosaur attack on the tram as it works its way through Skull Island, forcing Kong to leap to action to defend the hapless tourists (yes, even the ones stuck in the last car, which gets snatched up by one of the dino baddies and nearly lost in a giant, vine-strewn chasm).

In addition to being the first screen-based – and, not coincidentally, the most intensive – variation on the Kong theme, 360 3D is also clearly the predecessor to Universal Orlando’s Hogwarts Express, which also uses its 3D effects to create another novel, immersive ride experience.

The speculation
As previously stated, there is, at this point, some two years’ worth of rumors, leaked documents, and informed speculation that paint a remarkably detailed picture of what Skull Island’s ride experience will be like. In the interest of maintaining a healthy level of surprise, we’re not going to go too much into what the attraction will hold in store for guests come 2016 – but, with that said, there will still be what some may consider spoilers. Please proceed at your own discretion.

The façade of King Kong’s new digs will, not surprisingly, be molded almost exactly off of Skull Island’s appearance in the 2005 film, with its queue being themed as an ancient temple. The word from insiders is to expect something along the lines of either of the two Harry Potter flagship attractions, Forbidden Journey and Escape from Gringotts, in terms of its overall detail and sheer level of immersion. 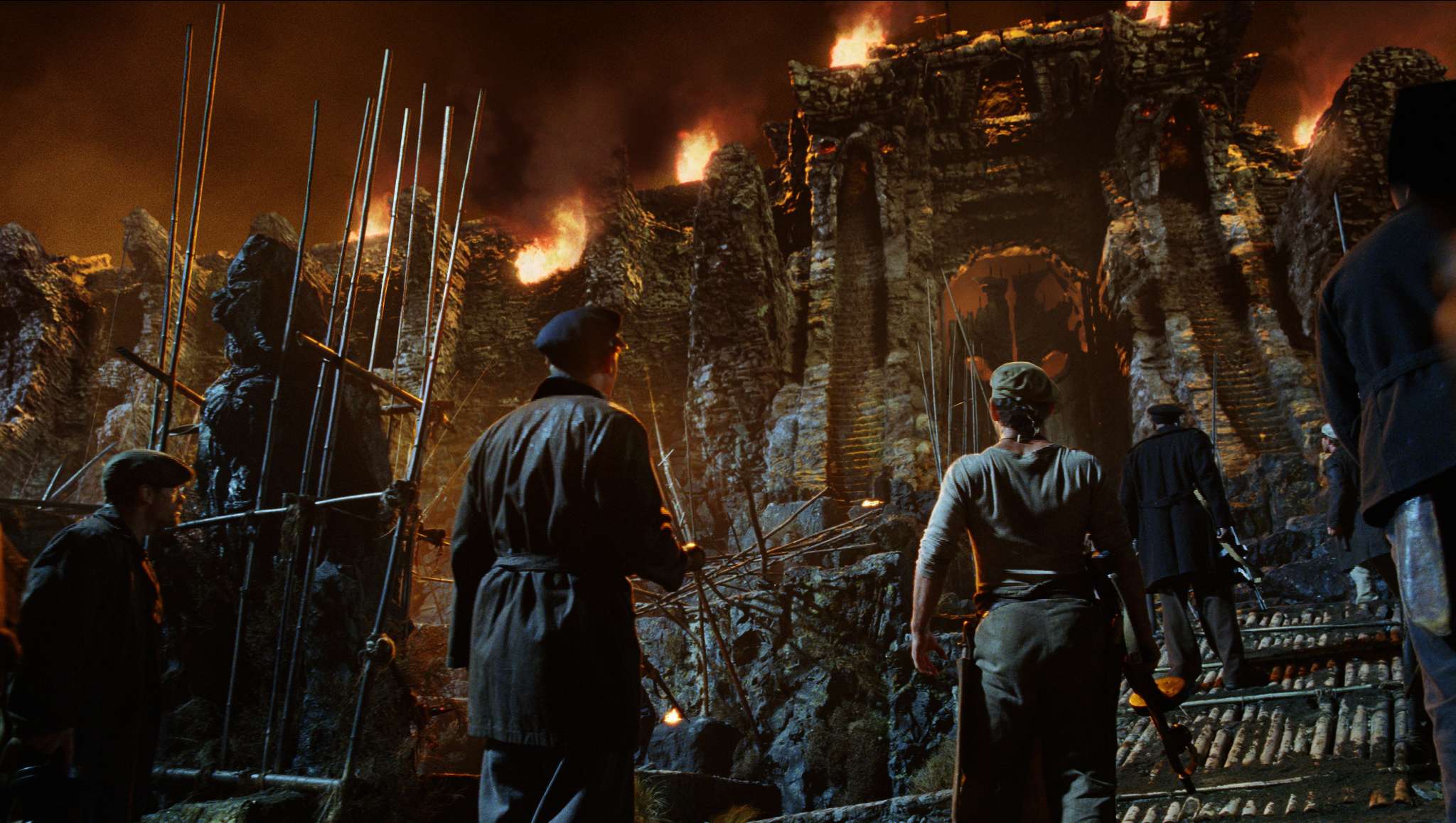 Unlike King Kong Encounter and Kongfrontation, which featured trams as the main ride vehicle, Skull Island will feature large jeeps, which may or may not have roofs on them; like its two predecessors, however, this new experience – should certain (wild) rumors be believed – will have the tour guide interacting with the attraction in a way that will be both revolutionary and spellbinding. 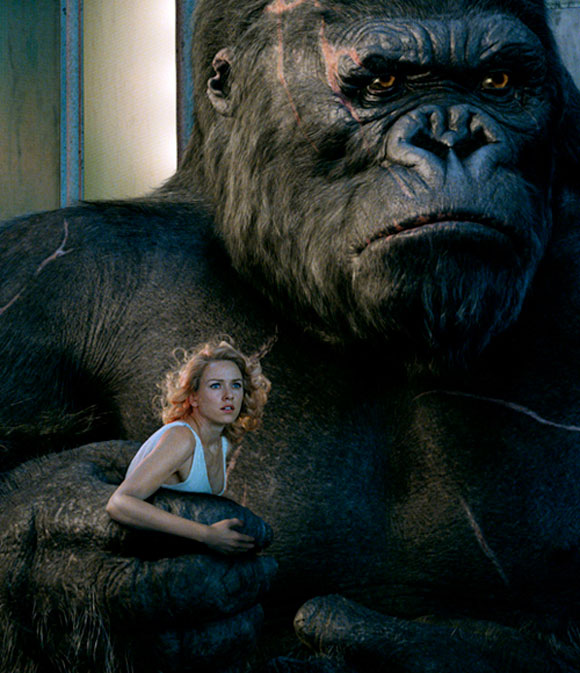 Taking cues from all three previous incarnations, Skull Island will bring the King to life by marrying large, fully articulated audio-animatronics with vivid, all-encompassing 3D projections; in fact, the grand climax is said to pay more than just a passing resemblance to Hollywood’s King Kong: 360 3D. 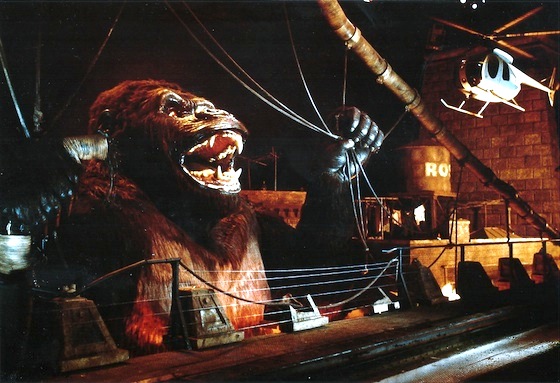 Excited by King Kong’s official announcement? Disappointed that it wasn’t anything more? Intrigued by the possibilities? Sound off in the comments below!

Marc N. Kleinhenz’s first dream in life was to be an astronaut. His second was an Imagineer. While neither completely worked out, he's now the editor of Orlando Informer, along with being its podcast co-host. He’s also written for 33 other sites (including Screen Rant, IGN, The Escapist, and California Informer [OI's sister site]), has had his fiction featured in several publications, and has even taught English in Japan. Imagineering school won’t be too far behind.