Is Universal building the best water park in the world?

Since the first of the year, Universal has been moving very quickly behind the scenes to ready Volcano Bay, the brand-new water park that is being constructed on-site just south of Cabana Bay Beach Resort: permits are being filed, designs are being approved, and construction has even started, with mounds of dirt already being moved about in the plot of land.

It’s time to not only get caught up on the latest developments, but to also start to lift the curtain a bit and get a sneak peek at what Universal will have lined up for guests come the summer of 2017. Like recent offerings at the resort – The Wizarding World of Harry Potter – Diagon Alley, anyone? – Volcano Bay is looking more and more like it’s going to be rather revolutionary.

The first unofficially officially confirmed details
Just two short weeks ago, Park Journey got the scoop of a (theme park project’s) lifetime: the latest rounds of permits for the water park, which reference a conceptual master plan that’s dated December 9, 2014 and which has a number of specifics for the property. Although none of them include, say, any attraction names, they do start to paint a fairly complete picture of what Volcano Bay will entail. 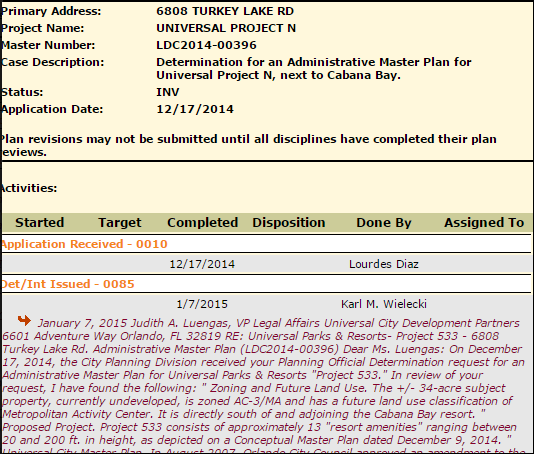 This is how everything is currently shaping up:

In case the construction work wasn’t enough to give it away, the latest documents specifically mention the water park’s location as being “directly south of and adjoining Cabana Bay Beach Resort.” It’s important to note the usage of the word “adjoining,” as various rumors from the past year have suggested that Volcano Bay will end up using the hotel’s parking lot, at the least, and some of its rooms, at the most – and this just may be our very first indication that this is, indeed, going to be the case.

The new park is officially listed as having a 34-acre footprint, which makes it just over half the size of Disney’s Blizzard Beach. Previous estimates have come in at 53 acres (which would make it just three acres smaller than Disney’s Typhoon Lagoon), and the discrepancy between the two could be accounted for by the presence of “backstage” areas, such as employee parking lots and offices. Or the previous number could just be wrong, of course.

This is, by far, the crown jewel of the unofficial reveal: the new permit lists 13 “resort amenities” that range from 20 to 200 feet in height.

What, exactly, is a resort amenity? The short answer is that we simply don’t know; the term doesn’t have an exact definition, and, depending upon the speaker, the usage, and the context, it could mean anything from a water slide to a water coaster to restaurants to changing rooms. Furthermore, a height of 200 feet would seem to suggest that these possible features or attractions may have theming that constitutes more than half of their actual contents, as it seems rather improbable to think of a water slide going quite that high. Then again, Verruckt (German for “insane”), which just opened last summer at Schlitterbahn water park in Kansas City, is a staggering 168-feet-tall (that’s taller than the Statue of Liberty!) – and if a regional player can pull that particular feat off, it’s hard to imagine a global giant like Universal not being able to top them by a mere 32 feet. 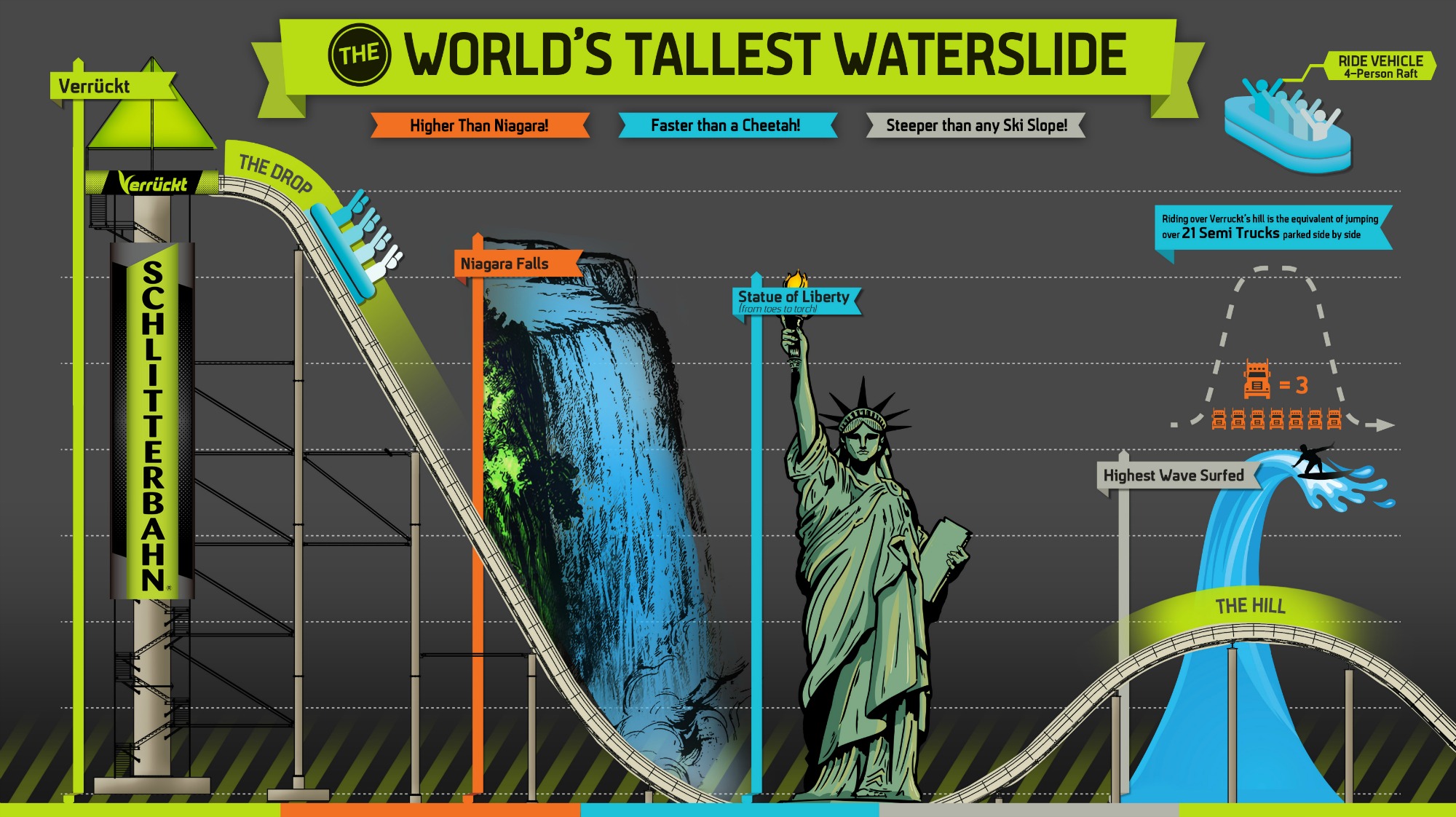 (Although, to be completely fair, the much larger capacity demands that a park at Universal Orlando will face might factor in here, preventing a slide of this magnitude.)

And if 200 feet sounds like a somewhat arbitrary number, keep in mind that Volcano Bay’s rumored icon – a massive, regularly-erupting volcano, but of course – is also supposed to be that exact same height. Should other structures around it, whether decorations or rides, come even close to its stature, the water park is going to easily be one of the most impressive in the world.

The attractions
Assuming that these resort amenities are, indeed, mostly or all attractions, what can we expect from them?

Teebin over at Orlando United has some information that might spill the beans on at least a couple of the rides: two lazy rivers, one slow and the other fast, are currently on the drawing board – and, even better, both will include sections that will be set inside the massive central volcano. Given Universal Creative’s recent track record, ranging from the twin Wizarding Worlds to Transformers: The Ride 3D to Cabana Bay, the sky is almost truly the limit with just how detailed these “magma” scenes could be – and what kind of surprises might potentially be hiding around each corner. 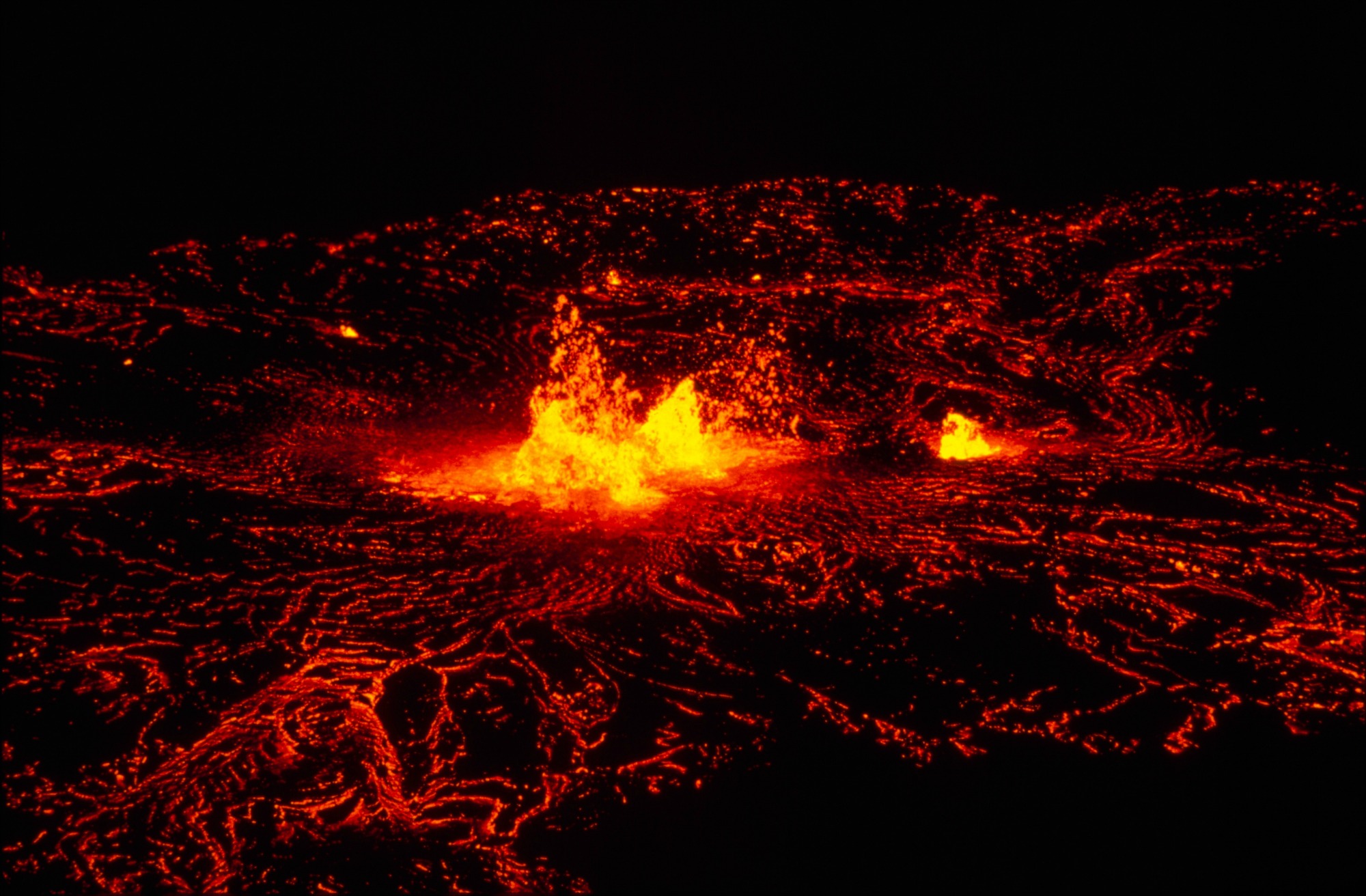 Yeah, I can see a spot where two lazy rivers could go…

There are very few, if any, other nuggets to go off of for the water rides, although one can easily imagine that the lineup at Wet ‘n Wild Orlando, Univesal’s other (off-site) water park, may hold some clues, given their rather standard nature. (The differentiation between Volcano Bay and Wet ‘n Wild – and, presumably, Disney’s own offerings – will mostly lie within the theming and overall presentation departments, not in the ride mechanics of raft slides or wave pools. Then again, if Universal could somehow build the water equivalent of The Amazing Adventures of Spider-Man, that truly would be a sight to behold and would instantly land the park on the global map.)

Finally, Screamscape comes to the rescue with one final attraction that may or may not constitute one of the documented 13: a nighttime show, which could possibly include pyrotechnics of some kind. This may be one of the more telling details to have slipped out (even if it remains unconfirmed), as it indicates that Universal is looking to deliver a whole package out of its new park, replete with day and evening activities and peripheral experiences.

The best of the rest
All right – this is where things start to get really interesting.

We’ve “known” for quite some time now that Volcano Bay will be the first water park in the world to be divided up into different themed lands, as is the case with any standard theme park since the 1950s. What, exactly, these lands will be – and whether they’ll be based off of any intellectual property, like we see so ubiquitously at both Universal Studios Florida and Islands of Adventure – is a giant question mark at this point, but Screamscape seems to have some interesting guesses as to what at least one of them may entail.

Noting that recent rumors have been swirling around Universal and Nickelodeon negotiating a new business deal, one that would specifically target increasing SpongeBob SquarePants’s presence at the Orlando parks, the site speculates that part of this may come in the form of a Bikini Bottom Land at Volcano Bay.

The potential for a whole slew of rides, attractions, and food (Universal’s new favorite) is certainly there, and it would establish a thematic litmus test for all other possible IPs that may be included. The company could certainly do much worse.

Even better, Screamscape has one final tidbit for all eager fans to mull on as the wait for the public announcement continues: apparently, the current plan is for each guest to receive an RFID-equipped wristband – yes, not unlike Disney World’s infamous MagicBands – that would double as a park ticket, credit card, and, most intriguingly of all, a Q-bot ride reservation system, which would (in theory, at least) eradicate all lines at all attractions across the entire park.

Welcome to the next-generation of water parks, indeed.

Tell us – will Volcano Bay live up to the hype, or will it be “doomed” to be just another water park? Leave your comments below.