Is the Hulk Coaster about to have a complete makeover?

In case you didn’t hear – and, really, you should’ve, given that we discussed this very point in some depth in the very hip and happening Orlando Informer Podcast – The Incredible Hulk Coaster is getting something of a major upgrade, and sometime in the very near future.

The news came courtesy of those master sleuths, Parkscope, after they recently dug up three permits for the mysterious Project 611 calling for the demolition and renovation of a pre-existing structure’s interior and for a new trailer for the work, which typically only happens for the bigger or more involved construction gigs.

What does this mean for your favorite coaster in Orlando, and when is it most likely to be finished by? We have the answers to these burning questions – plus lots more.

What’s this about a refurbishment?
Unlike the typical refurbishments that Orlando’s many attractions undergo (usually at the beginning of the year, the slowest period for the parks), which tend to be for simple maintenance upkeep, Incredible Hulk’s downtime will be for actual construction and renovation. Since Universal itself has yet to officially announce either the ride’s impending (and temporary) closure or the nature of its upgrades, all we have to go on is what’s been rumored over the past several months.

All of which is to say that, while we’re sure the info that’s been floating around out there is in the general ballpark of what eager new riders will be seeing next year once the construction walls have come down, be sure to keep the rumored portion of the intel in mind. It can save a coronary infarction or two.

What’s (probably) changing: The ride experience
While the actual physical layout of the track may not be getting altered in the slightest (don’t worry – those zero-g and cobra rolls, vertical loops, and corkscrews won’t going anywhere), the dynamics of the ride experience seem to be, in the immortal words of Walt Disney, getting “plussed.”

Firstly and, by far, most importantly, is that most (in)famous of first hills, which features a 150-foot-long tunnel out of which riders are launched to simulate their transformation into the Hulk himself. According to our friends at Pixels at the Parks, Universal is finally going to pull the trigger and update the mechanism that makes the ride vehicle go from 0 to 40 miles per hour in two seconds flat. 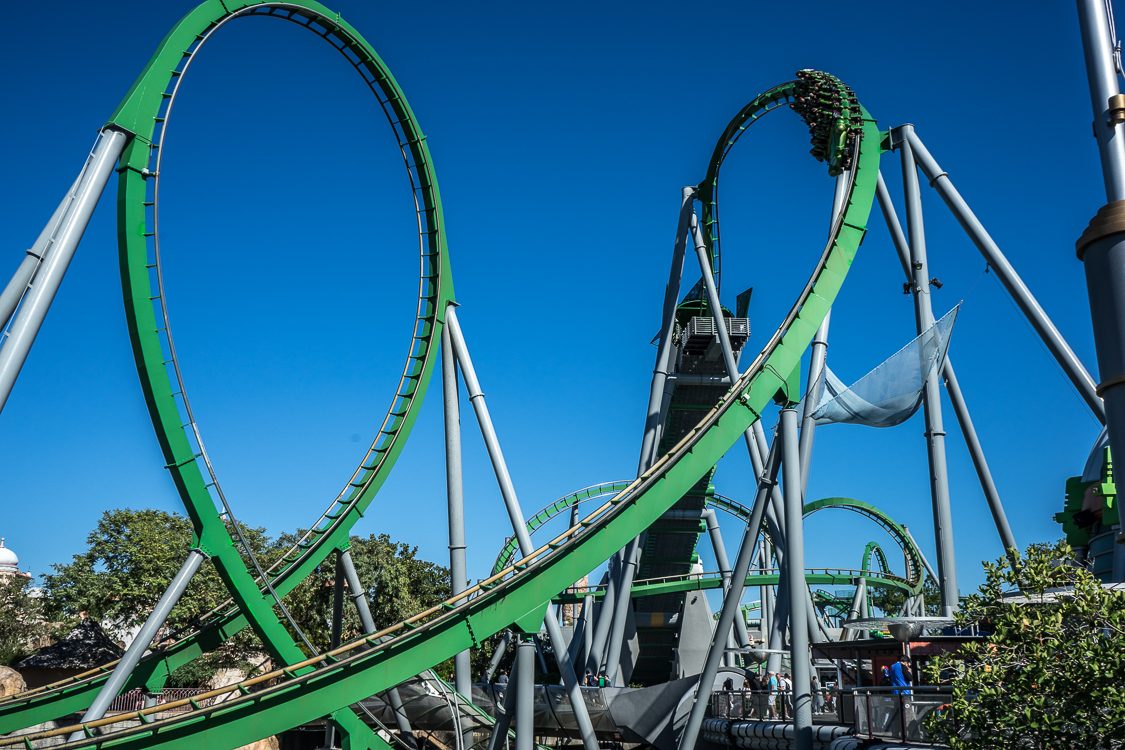 Originally, Universal and the vendor, MTS Systems, settled on using a series of drive tires to propel trains up that beast of a hill. The always-useful Wikipedia notes that while drive tires are typically utilized for braking on roller coasters, they can also be deployed for sudden accelerations, though usually only for lower speeds – such as five to eight mph – and never up an incline before Universal was crazy enough to try it.

Now, however, it seems likely that Universal will be switching from the tires to a linear synchronous motor (known as “ILMs” in the biz), which shouldn’t be that noticeable to riders but which provide a significant boon behind the scenes. Given my utter lack of an engineering degree, I turned to an expert on this matter, Steve Alcorn, who used to be an electrical Imagineer (he helped create Epcot) and who now writes a ton of books on the subject. This is how he explained it for my simplified brain:

In general, the incentive to change from drive tires to linear induction motors is strictly a maintenance one. There is virtually no preventative maintenance or wear-and-tear on LIMs, while tires need constant replacement, with significant materials and labor costs. The only reason LIMs aren’t used exclusively is that there is less total potential instantaneous transfer of energy available, which means less rapid acceleration, and LIMs require very close proximity to the vehicle, so they don’t work well on curved surfaces. When the first LIMs were installed on the Disney World People Mover back in the late ‘70s, they did not have sufficient power to move a vehicle up an incline, but since that time, they have gotten much more powerful and now make great launch canons for coasters.

Long story even shorter: if Universal is spending less resources on Hulk, that frees up more money and energy to spend on other, newer experiences – the best possible outcome for guests. 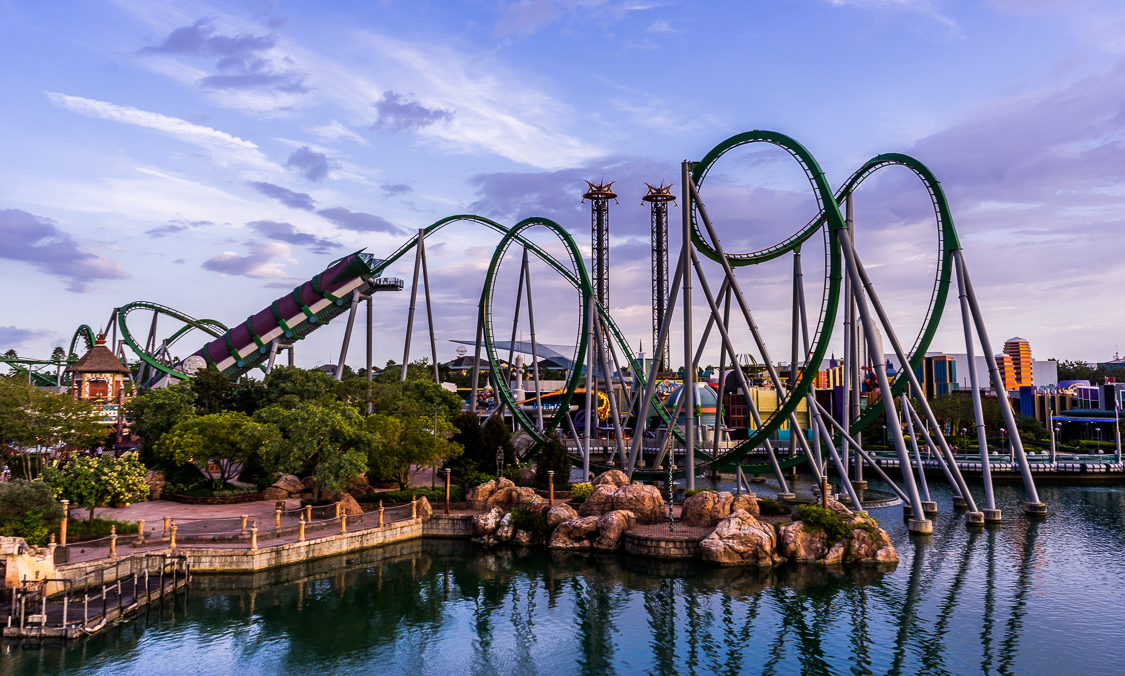 Other ride elements, meanwhile, that are rumored to be getting an upgrade include on-board audio (which may or may not tie into the attraction’s new story – more on this in a moment) and lighting, which just may make the track pulsate different colors during different parts of the day.

What’s (probably) changing: The queue
This is where things start to get really interesting.

As we’ve discussed before, the true heavy lifting of a themed attraction is done in the queue, where guests are transitioned from external reality to the internal dynamics of the story at hand. While Incredible Hulk’s technically does that – ushering riders into Dr. Bruce Banner’s science lab and showing his efforts at reversing his Hulk-prone condition via animated sequences on ubiquitous television screens – it only does so in the most basic of ways, with very little in the way of ambience, atmosphere, or, indeed, immersiveness (though it does feature a killer soundtrack the entire way through).

That’s why the single most exciting prospect of Hulk’s incredible refurb is the complete replacement of the queue. It’s probably too much to expect something along the lines of Harry Potter and the Escape from Gringotts, which includes holographic renditions of the movies’ actors and pseudo-elevator rides down into the depths of the Earth, but, still, there is much that can be done: imagine Banner’s lab, but after it’s been destroyed by a rampaging Hulk, hinting at the danger of the ride experience that is to come. Or maybe the lab will be destroyed while guests are in it. Or maybe the military is attempting to evacuate a civilian area before the green behemoth arrives.

Whatever form the new – or, simply, expanded – narrative takes, don’t hold your breath to see Mark Ruffalo, the actor who portrays Bruce Banner in the Marvel Cinematic Universe, pop up; although one can surmise that there is some level of cooperation between Disney, Marvel’s corporate parent, and Universal in redoing the coaster, it’s highly unlikely that Uni’s competitor wants to let some of its most valuable assets used in anything but its own endeavors.

The craziest rumor of them all? No shoulder restraints!
Given all those crazy inversions – and this should come as no surprise – Incredible Hulk has some pretty mighty over-the-shoulder restraints to make sure that you don’t fall out of your seat and into the Great Inland Sea during your rampage. The only problem with this scenario is that it tends to make guests feel boxed in, and it can, for certain individuals, make their heads do a painful impersonation of a ping pong. 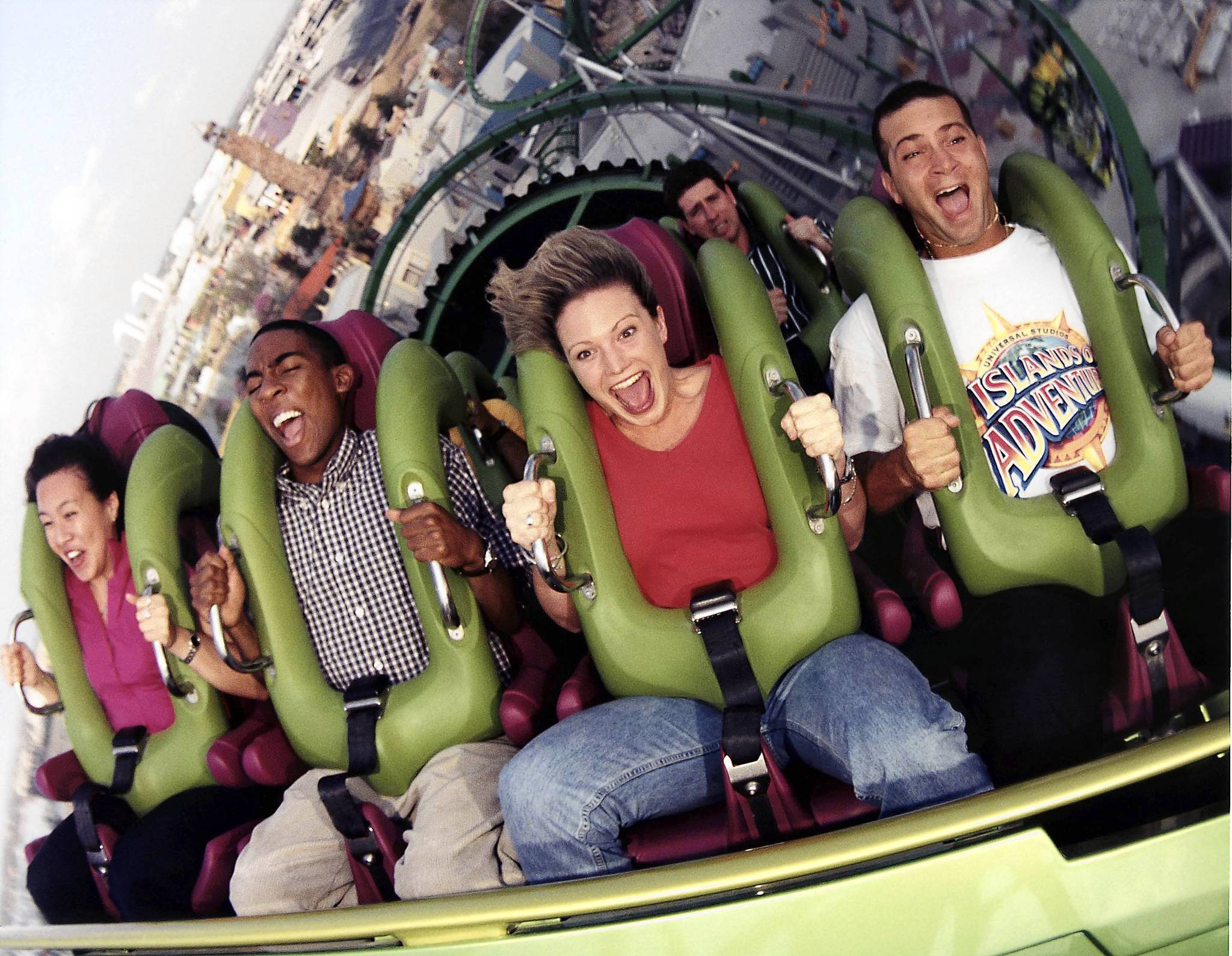 The solution? Why, a new, lap-bar-only restraint, of course, which the manufacturer, Bolliger & Mabillard, has apparently been working on for the past few years. There’s actually already a number of coasters that feature shoulder-less restraints, including Shock Wave at Six Flags over Texas (which, just for the record, was designed by Anton Schwarzkopf). A combination of lap bars, seatbelts, and that friendly by-product of nature, G-forces, all help to keep riders safely in their seats, in case you’re curious about the science behind the magic.

While this may not, on first glance, seem like a major change, the difference in experience can’t be overstated: the amount of freedom to move or, even, just look around would be unparalleled, and the contest to see who can keep his arms up the most during the coaster’s loops and corkscrews would instantly become the newest pastime at Islands of Adventure.

When is the refurb scheduled to take place?
The Incredible Hulk Coaster could be going down as soon as next month – it’s already been opening an hour or two later than the rest of the park the past few weeks, and will probably continue to do so for the next few – and it’ll stay down until sometime in November or December, just in time for the busiest period of the year: the holidays (when all attractions need to be up and running in a feeble attempt to process the crowds as much as humanly possible). Common consensus seems to indicate that Hulk would then close again in January for a much longer period, and then go fully operational just in time for the summer (and for the arrival of Skull Island: Reign of Kong across the park).

If true, expect the track-related upgrades to most likely be done in the first phase, and the more involved queue replacement to be handled in the second.

Do you think Hulk needs fixing in the first place – or that these changes will be enough to generate some new excitement in this decidedly old section of the park? Sound off below.