How Universal dropped the ball with Harry Potter

Editor’s note: This is my very first article on Orlando Informer, published all the way back in March 2012. Though now perhaps outdated by the presence of The Wizarding World of Harry Potter – Diagon Alley, I think the arguments it makes and the challenges to Universal Creative it issues are just as relevant as ever – if not more so, given the impending arrival of King Kong and Nintendo.

Disagree with my critiques? Happy that I’ve improved as a writer (hopefully!) since then? I’d love to hear your thoughts in the comments below.

Let’s get the obvious out of the way first: the Wizarding World of Harry Potter is unquestionably successful at that mysterious thing that theme parks do – theming. The flurry of colors and activity in the shop windows, the architectural detail of lurching buildings and talking portraits, the sounds of Moaning Myrtle snuffling and Mandrakes screaming and John Williams’s classic score gently swelling in the background… it’s a moving, magical experience, quite adept at immersing the guest into another time and place. 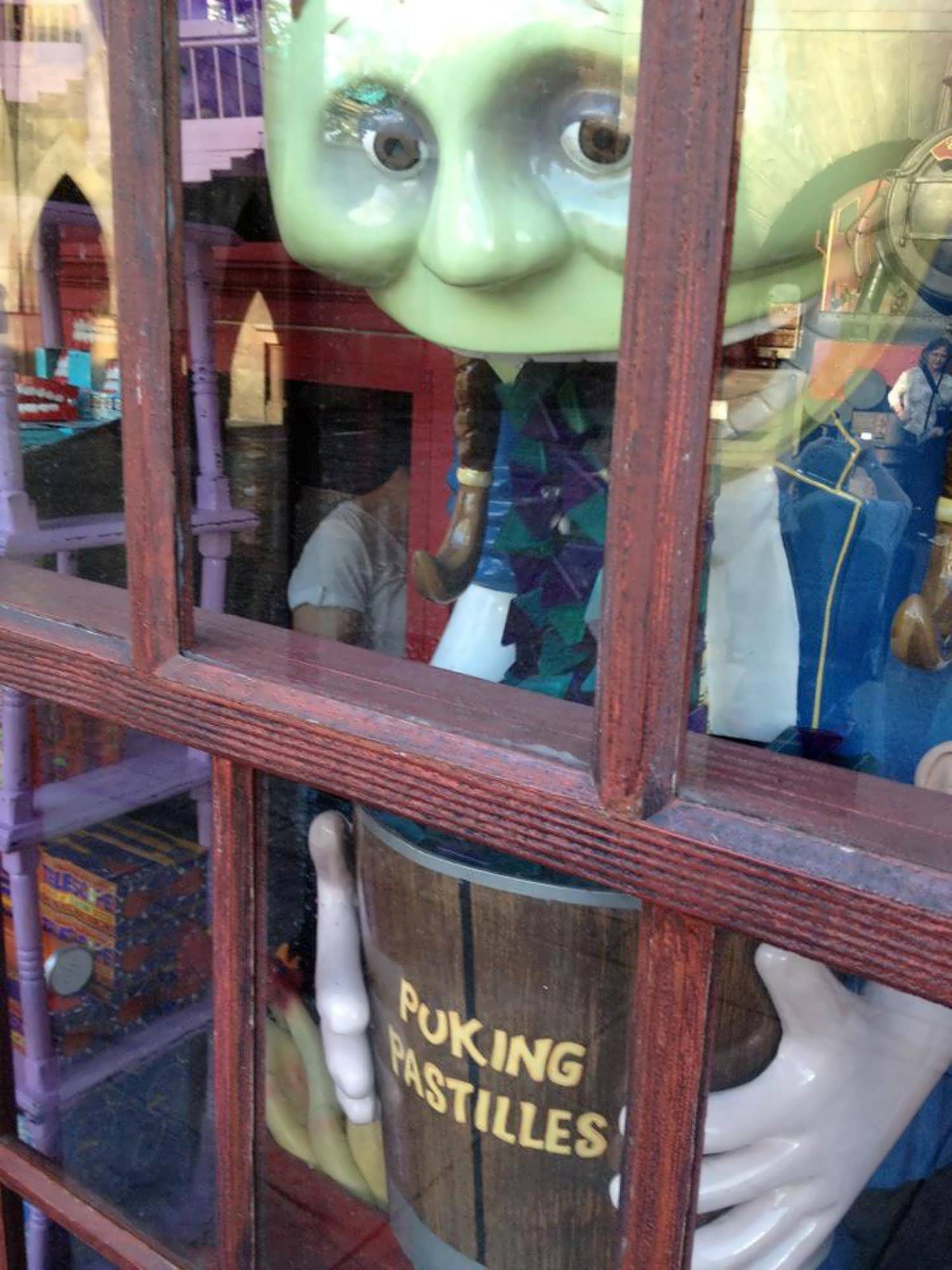 But like all park rides, there are a few bumps along the way, hiccups that jostle the guest out of the fantasy of J.K. Rowling’s world and back into the cold, hard reality of corporations literally spending millions of dollars to have you not think about the millions that were spent to trick you into believing. The centerpiece of these immersive difficulties is also, ironically enough, the park-within-a-park’s showcase of theming achievements: Hogwarts Castle.

There is something undeniably magical about seeing Professor Dumbledore’s office – particularly with Dumbledore himself in it, bidding you welcome – as well as being within touching distance of his Pensive or the Mirror of Erised or the Sorting Hat. The Defense against the Dark Arts classroom is literally brimming with detail; the Fat Lady serenades you with her rather – um, exuberant – personality. There was obviously painstaking effort to envelope the audience in the vitality of the books and the detail of the films.

And yet, for all the hard work at recreating the environments from these other media, seemingly no thought was given to their actual location to one another. It’s rather hard to truly believe oneself in Hogwarts – particularly for all the diehard Potter heads who constitute the rank-and-file visitors to the Wizarding World – if Dumbledore’s office from the utmost spire of the castle is literally right next to the Dark Arts classroom, which is (relatively) in the middle of the castle, and if the Sorting Hat is sitting quite randomly in the middle of a nondescript hallway (come to think of it, so are the house point counters, as well as all the rest of the props from the movies). 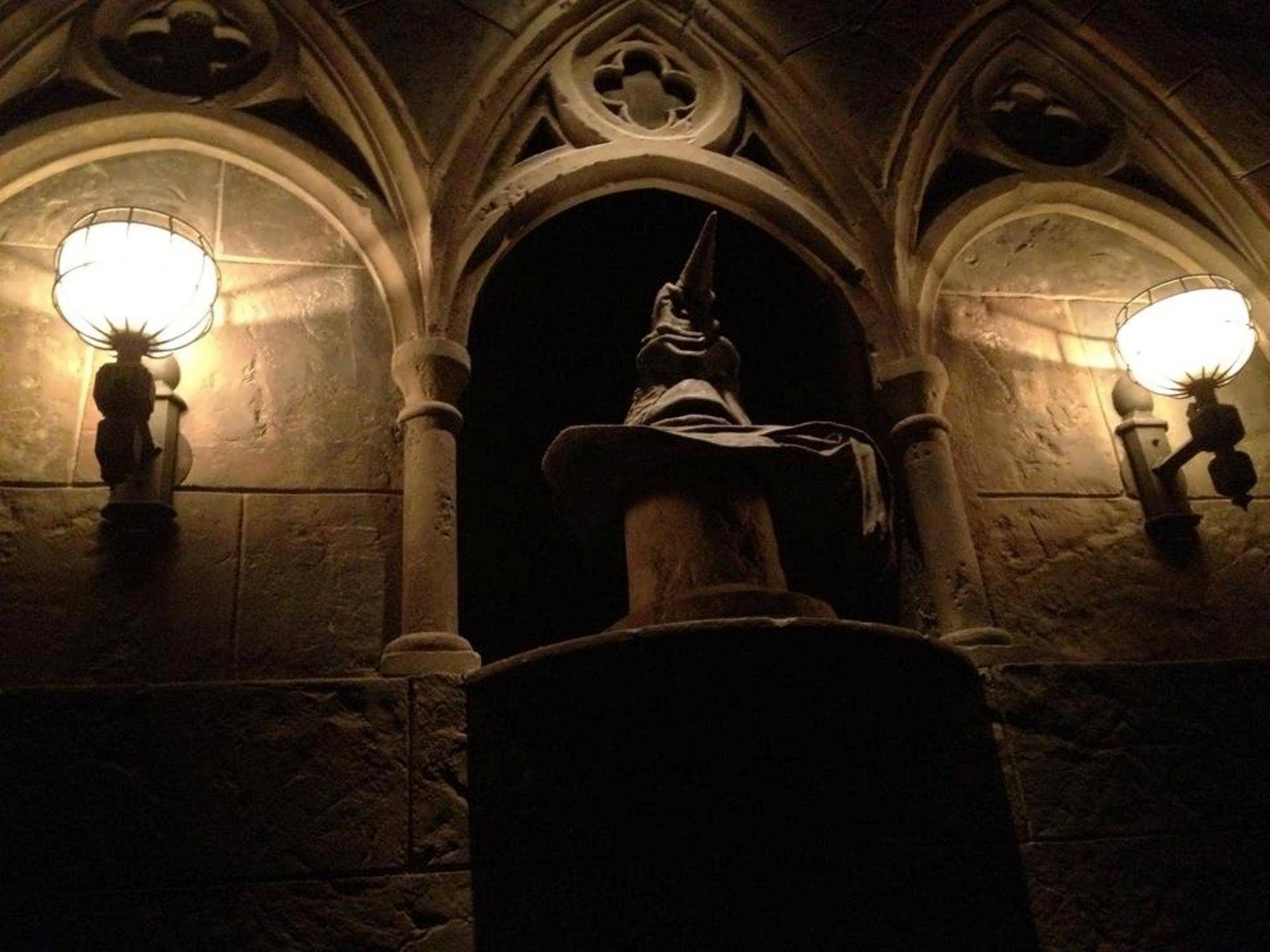 It is, of course, a nitpick, but it’s a formidable one nonetheless. Imagine going into a recreation of President Lincoln’s house from Springfield – one that is meticulously detailed, at great expense, in the sake of authenticity – only to have the order of the rooms be not only randomized, but also include elements from the rest of old Abe’s life, such as his office from the White House. One would still very much appreciate all the hard work and enjoy the accumulative effect of the individual pieces but would be left wondering at the thinking behind it all.

And then there’s the ride itself. Harry Potter and the Forbidden Journey is impressive, engrossing, wondrous – and, at least narratively, nonsensical. Much like what the videogame Enter the Matrix was to the two Matrix sequels, Forbidden Journey is merely a greatest-hits mishmash of action sequences from the source material; there is very little transition from, say, outracing a dragon to flying around a Quidditch pitch to being chased by Dementors, just as there is no explanation given for how the Forbidden Forest is somehow right next to the Chamber of Secrets. In fact, the only way wide swaths of the audience ever know that Hermione uses Floo powder to get guests from the Room of Requirement to outside the castle at all is because they read it online. This does not make for a solid story, even for a theme park attraction.

The common denominator between queue and ride is the lack of an internal structure. Universal’s Creative team has created the most lushly, lovingly detailed sack of skin and hair and eyes and organs but forgot to insert the skeleton, instead indulging in the guest’s willing suspension of disbelief to add the solidified calcium. The result mars the overall experience, but, fortunately for all involved, nowhere near substantially enough to diminish the joy of walking into Ollivander’s or peering at an animated Marauder’s Map or, most especially of all, drinking a butterbeer (frozen, of course).

Here’s just to hoping that the expansion of the Wizarding World takes a more robust, exhaustive, and, most importantly of all, seamless form.

Did Diagon Alley live up to the challenge? Tell us below.

How to make your family fall in love with Universal