When the Disney Company purchased Lucasfilm, Ltd. for $4 billion back in October 2012, everyone’s attention went straight to the mammoth Star Wars franchise. And rightfully so – Disney has wasted no time in bringing new television series, novels, comic books, and, of course, film trilogies to bear on the public at large, replete with the impending Star Wars Land that is currently (and unofficially) scheduled to be inserted into Hollywood Studios sometime in 2017 or 2018. 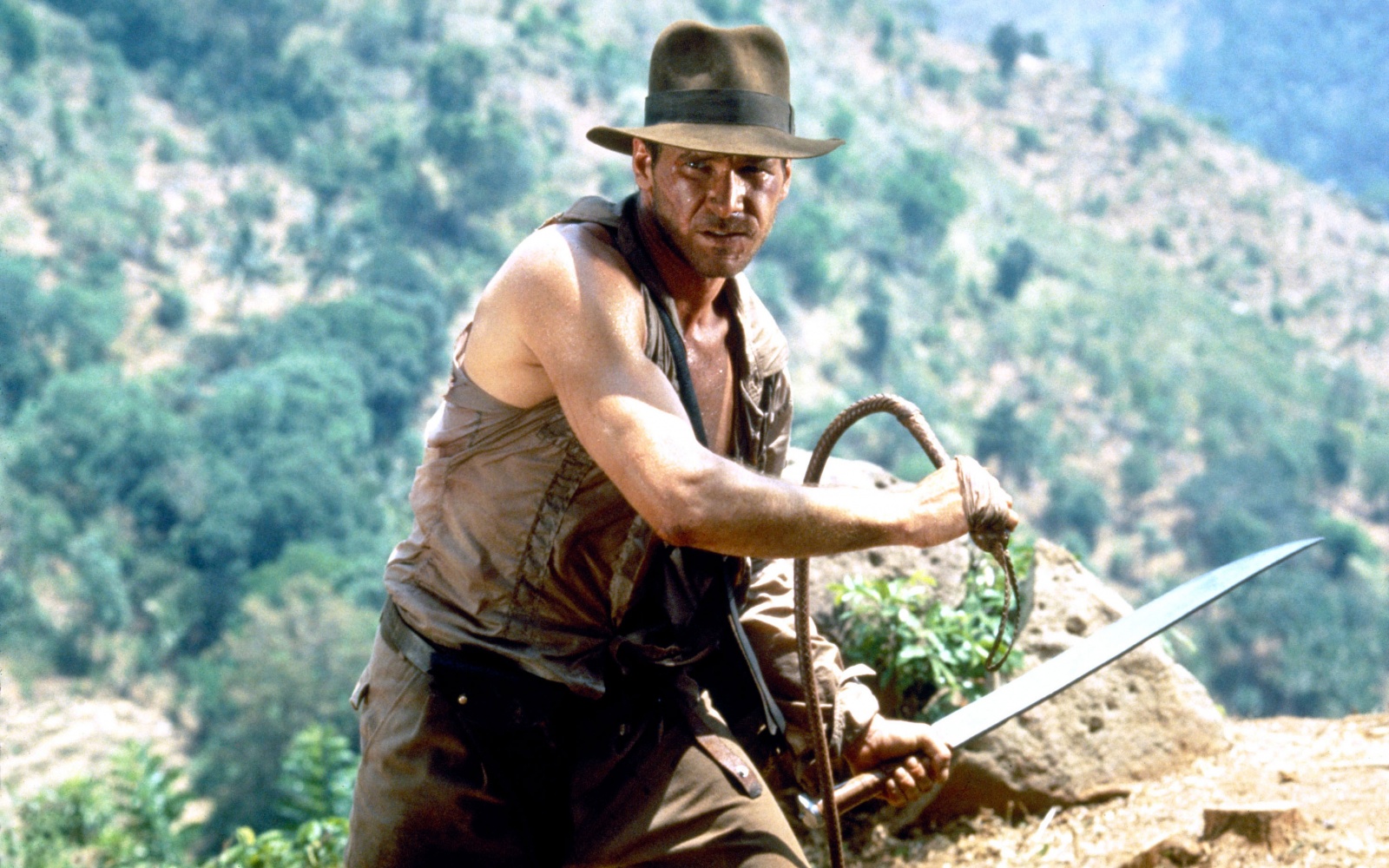 But Indiana Jones was also part of the deal, and though its multimedia presence is nowhere near as predominant (read: stifling) as its outer-space cousin, it’s still a considerable intellectual property in its own right. Word arose earlier this year that Disney is interested in rebooting the film series, with the company having purchased back the distribution rights from rival Paramount a year-and-a-half ago in order to do so.

And now comes the unexpected word that the Mouse House is going to be moving on this property at its theme parks well before it ever gets any of its Star Wars plans off the ground: earlier this week, it announced that a brand-new lounge called Jock Lindsey’s Hangar Bar will be opening up at Disney Springs (that’s the area formerly known as Downtown Disney, in case you haven’t noticed the massive amounts of construction over the past two years) sometime this fall. 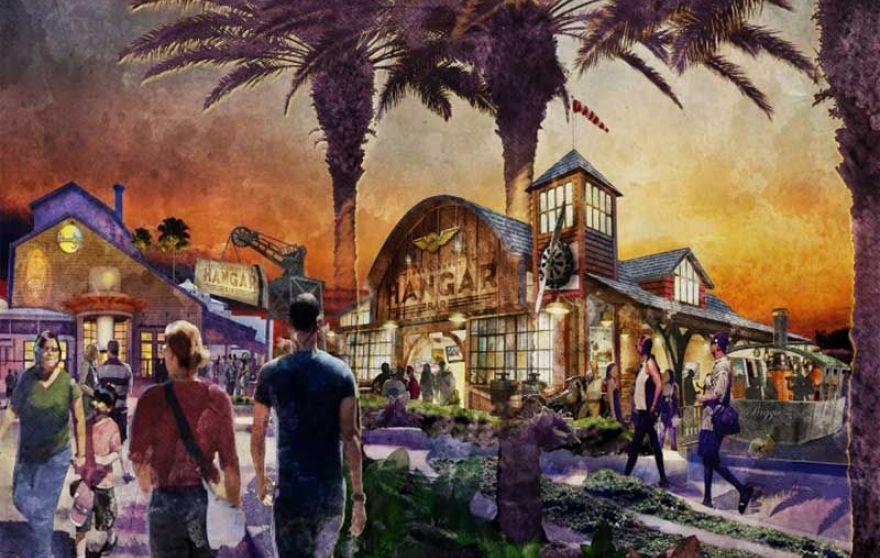 As it turns out, there’s much to be excited for in this announcement – as well as much to read into, as the Hangar Bar might not only point the way to Disney’s (and, of course, the industry’s) future, but sketch out its biggest aping of Universal’s recent approaches to and innovations on theming, as well.

Indiana Jones and the Theme Park Adventures
First, a quick recap may be in order.

After overseeing the first three films (starting with Raiders of the Lost Ark in 1981 and going to Indiana Jones and the Last Crusade in ’89), writer/producer George Lucas took his baby to Hollywood Studios in ’89 with the Indiana Jones Epic Stunt Spectacular, which is a – you guessed it – stunt show that recreates several of the first movie’s most iconic moments (and which is still running to this day, although word on the street has it that it might soon be closing to make way for, ironically enough, Star Wars Land).

Indiana Jones and the Temple of Peril, at Disneyland Paris, followed four years later (when the short-lived television series The Young Indiana Jones Chronicles was still on the air, for all those playing along at home). This may be the second Indy attraction, but it’s the first actual ride: a lightly themed roller coaster, with ride vehicles that were designed to look like mine cars (lifted from Indiana Jones and the Temple of Doom [‘84], appropriately enough) and a track that careens all over the face of the temple.

The first fully themed, built-from-the-ground-up experience would have to wait two more years. Indiana Jones Adventure: Temple of the Forbidden Eye debuted at Disneyland in 1995 (with a mostly-similar sister attraction, subtitled Temple of the Crystal Skull, following at Tokyo DisneySea in 2001) and can, in Universal terms, be best described as a combination of The Amazing Adventures of Spider-Man, due to its “enhanced motion” ride vehicles, and Harry Potter and the Forbidden Journey, thanks to its extremely detailed and immersive queue.

Indiana Jones Adventure has long been considered one of the gold standards of the theme park industry, a status which doesn’t seem likely to change for quite some time to come – if, indeed, ever at all.

Indiana Jones and the Next Generation
Jock Lindsey’s Hangar Bar won’t be anything like the previous Indy outings, and not only because it’ll be a restaurant instead of a ride; rather than being a reprocessing or general condensation of the source material, which has been the time-honored theme park model (think, say, Magic Kingdom’s Adventureland or Universal Studios Florida’s World Expo), or being a presentation of a particular slice of a fictitious reality lifted whole cloth, as Universal has pioneered with its twin Wizarding Worlds of Harry Potter, this new development is turning the immersion paradigm on its head – it’s drawing you into the IP’s world instead of the other way around. 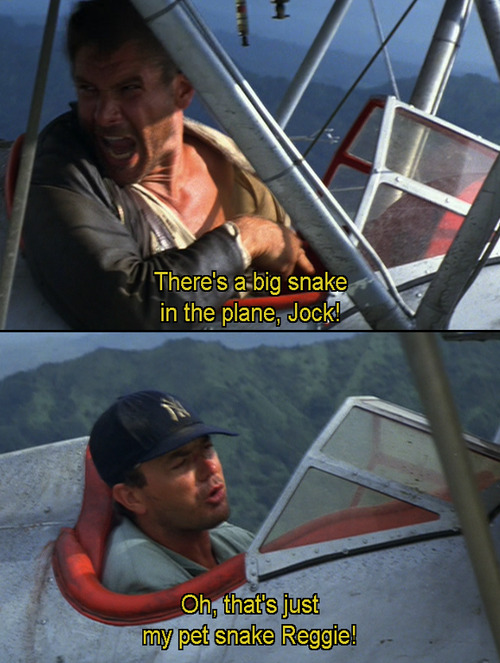 The name alone should be the first tip-off: “Indiana Jones” is nowhere to be seen, due to the small fact that he has very little to do with the venue even in the confines of his own imaginary world; this is an establishment owned and operated by his close associate and frequent pilot, Jock Lindsey, which explains what he’s up to when not whisking Dr. Jones around the world. (The character actually only has one quick appearance in the four films – in Raiders’s now-legendary opening sequence – but he’s since been given further adventures in the franchise’s “expanded universe.” As such, it’s not as unusual for Disney to pick the character to anchor the new eatery as it might initially seem.)

Given this premise, the whole lounge has been arranged to reflect Jock’s personal life and times instead of being a repository of various Indiana Jones props or other assorted tie-ins, meaning that 1930s aviation – vintage travel posters, propeller-based ceiling fans, and a diving bell booth, for instance – will be the main draw here. 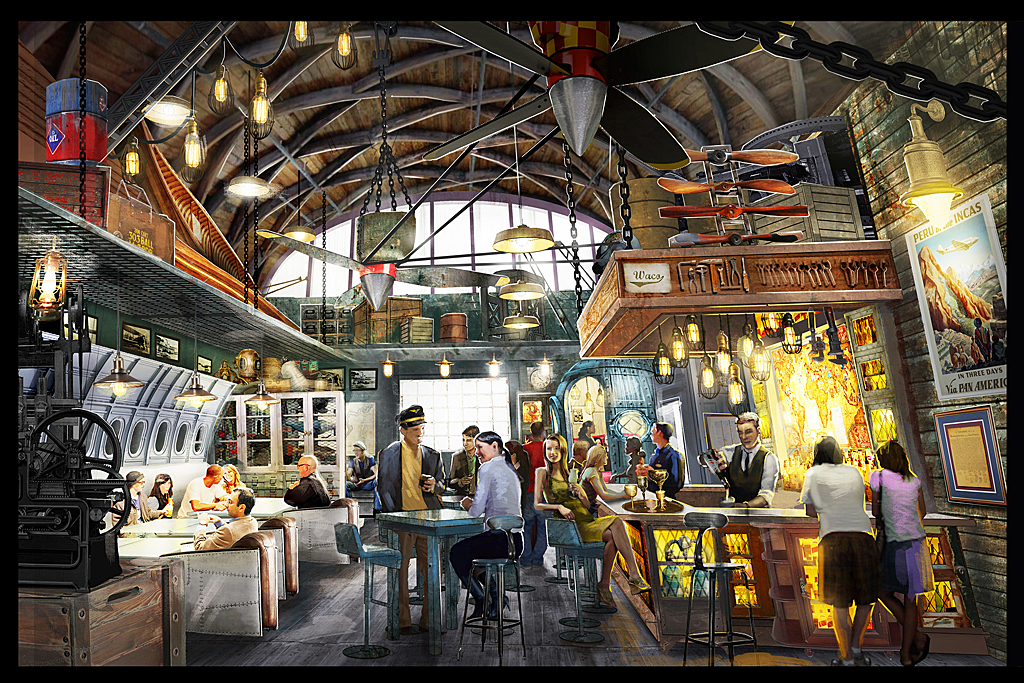 Which isn’t to say that the famous archaeologist won’t be making his presence known to some degree, of course, from letters to his good buddy being displayed around the joint to the appropriately named Rolling Boulder Meatballs (also lifted from that same Raiders of the Lost Ark sequence) being on the menu. But the fact that these little touches are allowed to be just slight nods to the greater franchise instead of being forced on the venue as a contrived premise speaks volumes to the newfound freedoms Disney is affording its Imagineers and the ingenuity they’re bringing to such a hallowed license. It seem as if the question that is fueling the design of the Hangar Bar was “How can we make guests feel as if they’ve truly stepped into the world of Indiana Jones?” instead of “How can we milk the Indy name for every last penny it’s worth?” The closest development would be the London waterfront at the new Wizarding World, though, even there, it’s about recreating a famous space instead of dragging a fictitious character’s hypothetical bar into the really-real world.

It is, needless to say, a refreshing development, and one that speaks well to not only future franchise deployments, but also to the giant Bantha in the room: Star Wars Land. (Just imagine a whole area devoted to such mini-portals into the Skywalkers’ world!)

How Disney is aping Universal
Opting to go for a new bar instead of yet another traditional attraction is extremely telling: not only does it allow the otherwise famously slow Disney to open the location in a matter of months instead of years (a problem plaguing its long-in-development Star Wars and Avatar projects), it also places the intent of the new venture exclusively on merchandise, allowing the Hangar Bar to be a money-printing machine. Where else can a guest have a Hovito Mojito (with Barsol Quebranta Pisco, fresh lime juice, and “simple syrup”) or the Air Pirates Everything Pretzels appetizer (with house-made mustard and beer cheese fondue)? 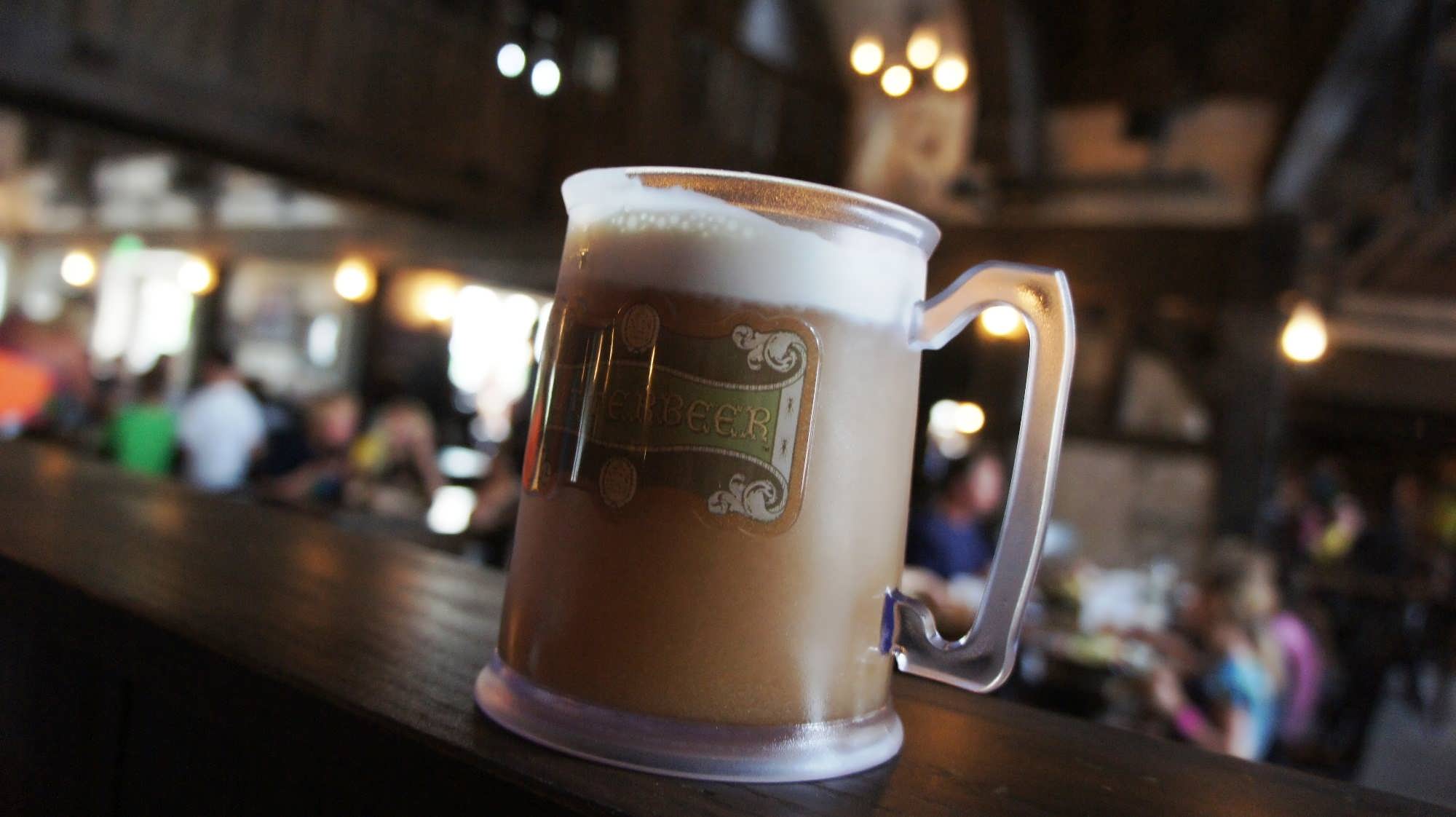 Of course, the lucrativeness of offering exclusive culinary delights was first pioneered by Universal’s Hogsmeade five years ago – the sheer popularity and profitability of Butterbeer almost singlehandedly recouped the company’s $260 million investment within a staggering four months, and it seems as if the totality of its follow-up, Diagon Alley, was greenlit solely on the expanded merchandising offerings, from wizarding money to, of course, Butterbeer ice cream. Disney’s first major attempt at cashing in on the theming of food and drink – Be Our Guest restaurant and LeFou’s Brew, both in Magic Kingdom’s recent New Fantasyland expansion – was solid, though lacking the presence of a franchise as substantial as Indy and the new wrinkle of incorporating it into the parks.

(Furthermore, just having alcohol being so heavily featured on Jock Lindsey’s menu goes to show that Disney has been paying close attention to Universal’s recent theming exploits, from Springfield‘s Duff Beer to Diagon Alley’s Dragon Scale and Wizard’s Brew.)

The most exciting aspect of all this is seeing how Universal, in turn, will lift this new theming experimentation from its rival and apply it to its own future developments. With such heavy-hitters as King Kong and Nintendo on the horizon, it’s extremely exciting to think of the sheer possibilities that are available. And then, of course, just around the corner is Pandora: The World of Avatar, putting the ball squarely back in Disney’s court…

The future of theming has, simply put, never looked brighter.

Think Disney will need more to overtake Universal’s creative roll? Sound off below.

In the meantime, be sure to check out even more of Universal’s future:

Nintendo is coming to Universal Orlando

The three things Universal’s new water park MUST do

A stroll down Universal’s memory lane