One holiday tradition for my family is our annual trip to enjoy the sights and sounds of Grinchmas in Seuss Landing at Islands of Adventure. It just doesn’t seem like Christmas without it and we think we’ve only missed a couple of years since its beginning. Best of all, it’s special needs friendly! 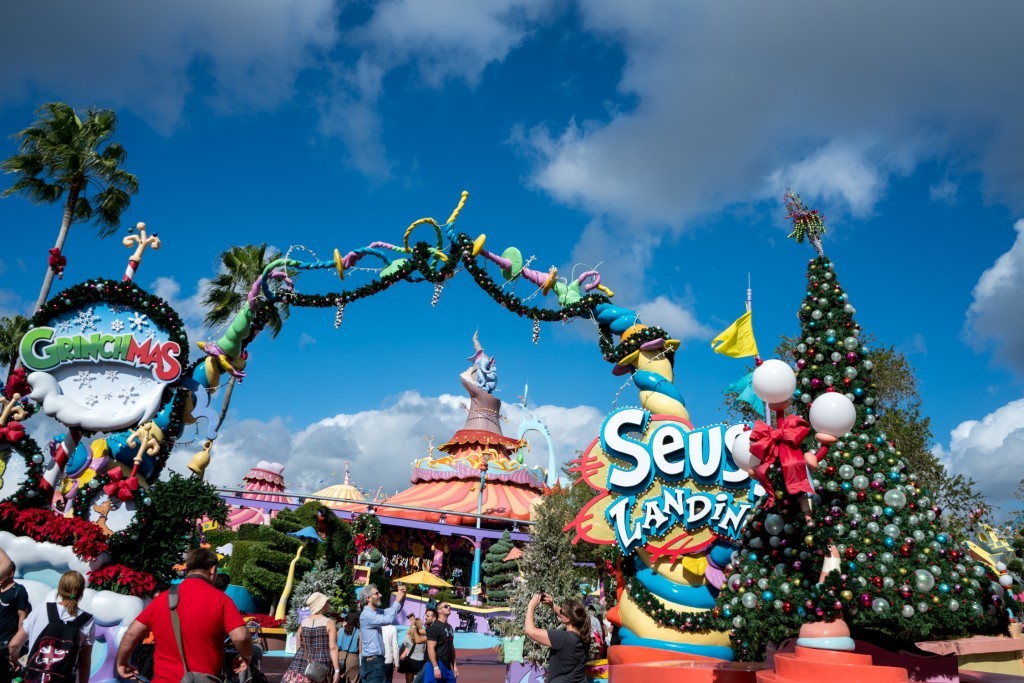 This year is the 15th stoo-pendous Grinchmas celebration which this year began December 5th, 2015 and ends January 2nd, 2016. Even though Seuss Landing is already unique in its design, the decorations heighten the feeling of this uncommon island within Islands of Adventure. It truly is beautiful to behold.

Seuss Landing is magically transformed into Who-ville for Universal’s Who-liday festivities, the town featured in Dr. Seuss’ story, How the Grinch Stole Christmas. If you’ve seen the movie by the same name, everything looks authentic, including the main character, the Grinch. We love the decorations, the team members happily calling out “Happy Who-lidays” and “Merry Grinchmas” — the atmosphere is one of celebration and joy. Even the makeup and appliances used to transform entertainment team members into Whos is unmistakably perfect (but keep that secret from your kiddos – let them believe they are real). No matter how long you stare at the Whos’ noses, they look like the actors really did grow into them! 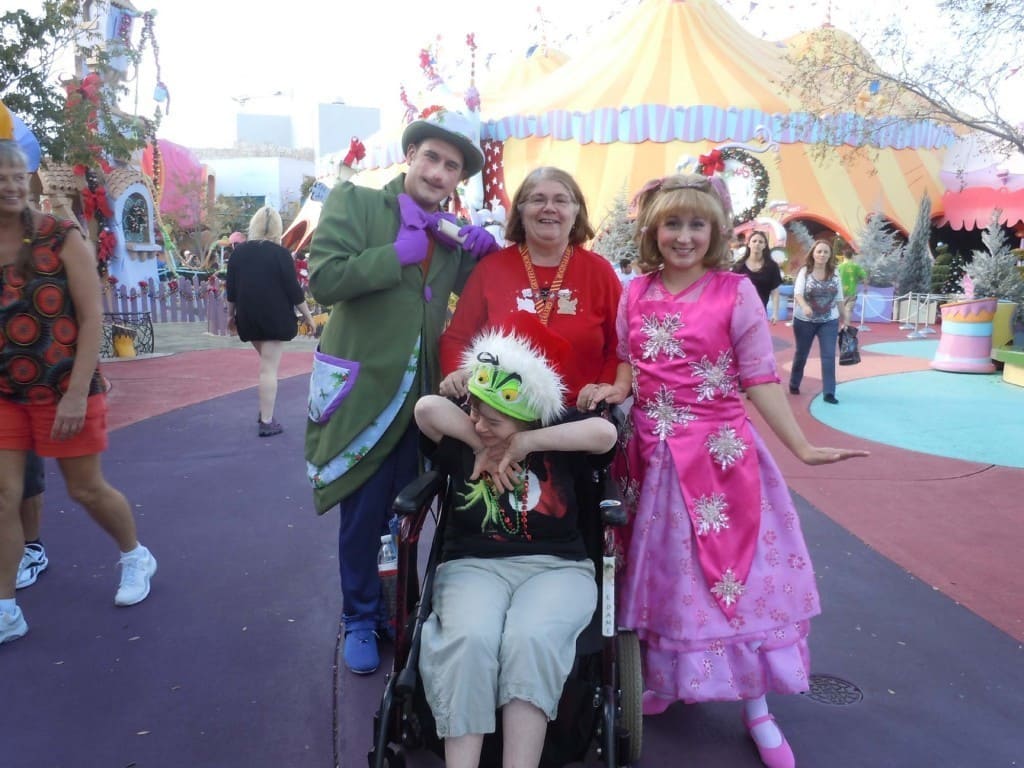 The Whos love to interact with all children and those with special needs are no exception! They have been so kind to our daughter and a visit to Who-ville brings out delight in her that we sometimes rarely see! She’s usually very shy, yet she wants to greet every Who she meets!

Grinchmas came to life in December of 2000, a year after Islands of Adventure opened and the same year the How the Grinch Stole Christmas Movie, from Universal Pictures, hit the theaters. With one exception, the celebration has been annual ever since. The year 2006 was a real let-down for those who visited the park and found there were no decorations, no Grinch’s Lair, no music, no Whos. Yes, I was there. 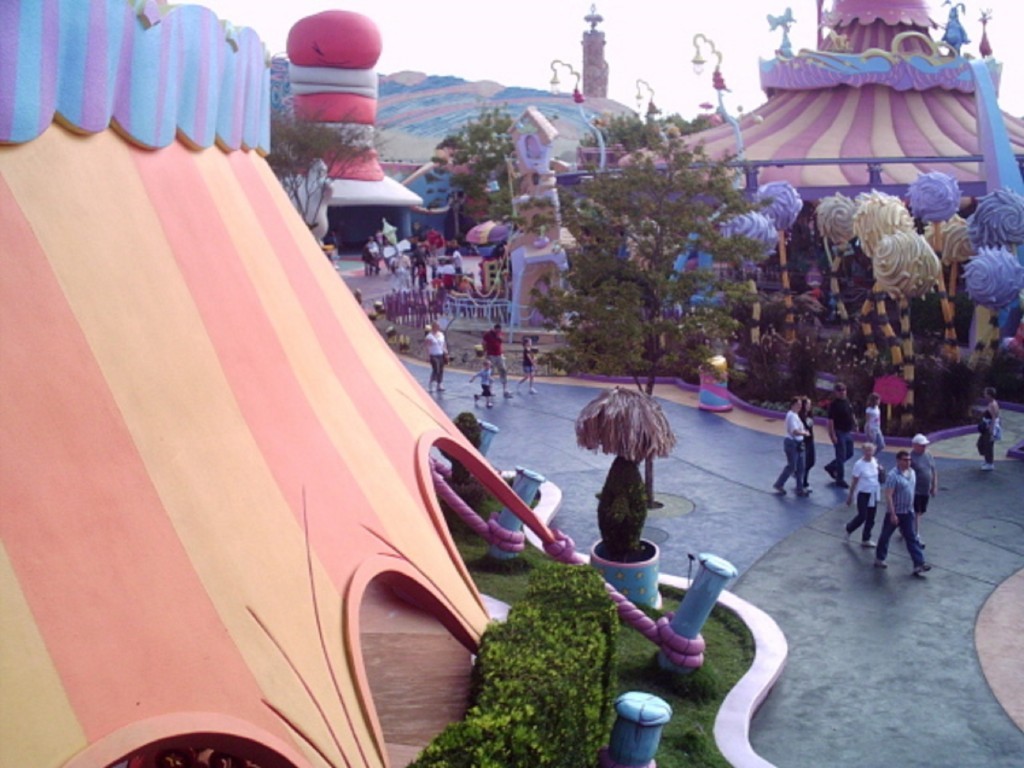 It was as if the Grinch HAD stolen Christmas! Happily, Grinchmas returned in 2007 to a grateful audience, along with the new High in the Sky Seuss Trolley Train Ride.

However, still missing to this day is the Grinch’s Lair, which had occupied the Trolley space previously. The Lair looked JUST LIKE the sloppy, unkempt and full of garbage scenes from the movie. As you waited in the cave-like queue, you passed all kinds of instruments and concoctions, many of them interactive, fashioned to look like those in the movie.  Also, the wait didn’t seem long because the movie was running on monitors made to look like they were trash. I just wish Universal execs would realize what a HIT this was with guests and bring back the attraction. (I apologize – we’ve either lost our pre-digital age prints or we were told no photos, but you’re free to use your imagination….)

I remember the first Grinch we met in his Lair in 2001. You would have sworn it was Jim Carrey in that Grinch suit! He and my husband exchanged verbal barbs, yet, when the Grinch talked to our daughter, there was no doubt his heart had grown three sizes. That guy was amazing with his interpretation of the movie’s Grinch. Our daughter was invited to sit with him in his over-sized recliner, but she sat on the edge. In his best Grinch voice he asked her to scoot back.  Being intellectually disabled, she didn’t understand his direction, so after a few seconds he belted out, “Well, allllrighty then. I’ll scoot UP!” which he did with over-the-top animation. I know he talked to her for a whole five minutes. Subsequent Grinch actors have brought the same authenticity to the role. One year, after the picture, the Grinch got up and walked us out through the exit, holding our daughter’s hand the entire way. 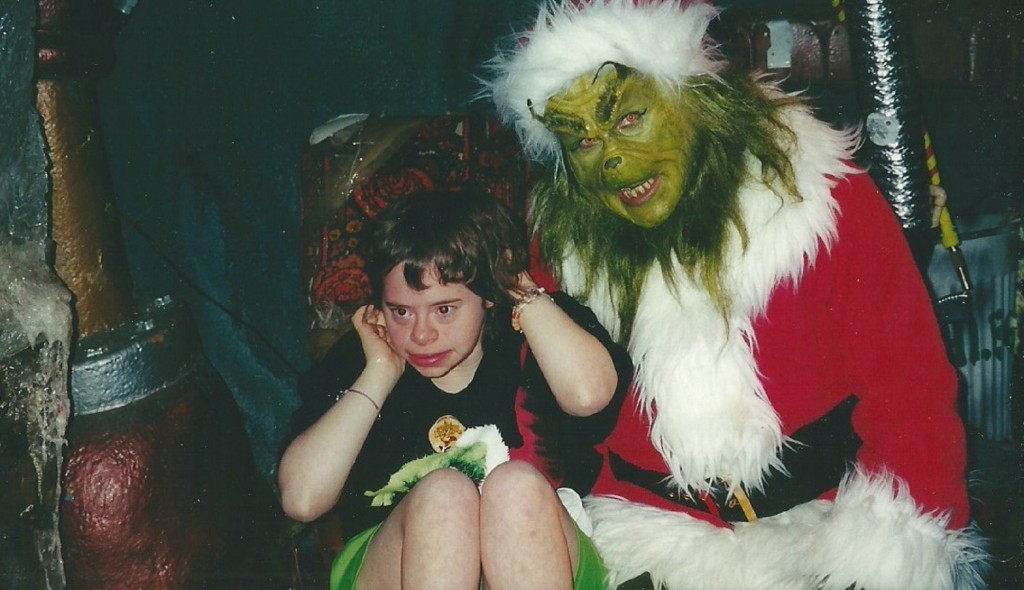 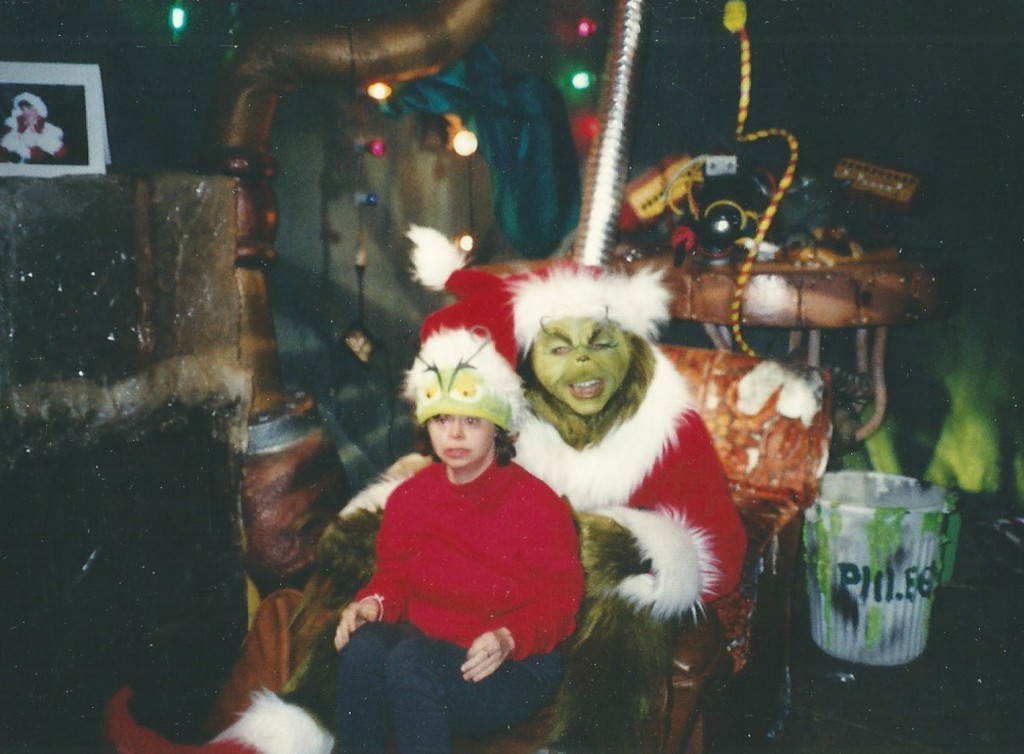 Since 2007 photo ops with the Grinch have been held in the All The Books You Can Read store and yes, you can take photos with your own camera. If you haven’t purchased a Photo Connect package, you will be given a card to take to any Photo Connect counter to see and purchase the professional photo, good for that day only. Don’t pass up this opportunity. Parents will love it just as much as the kids. 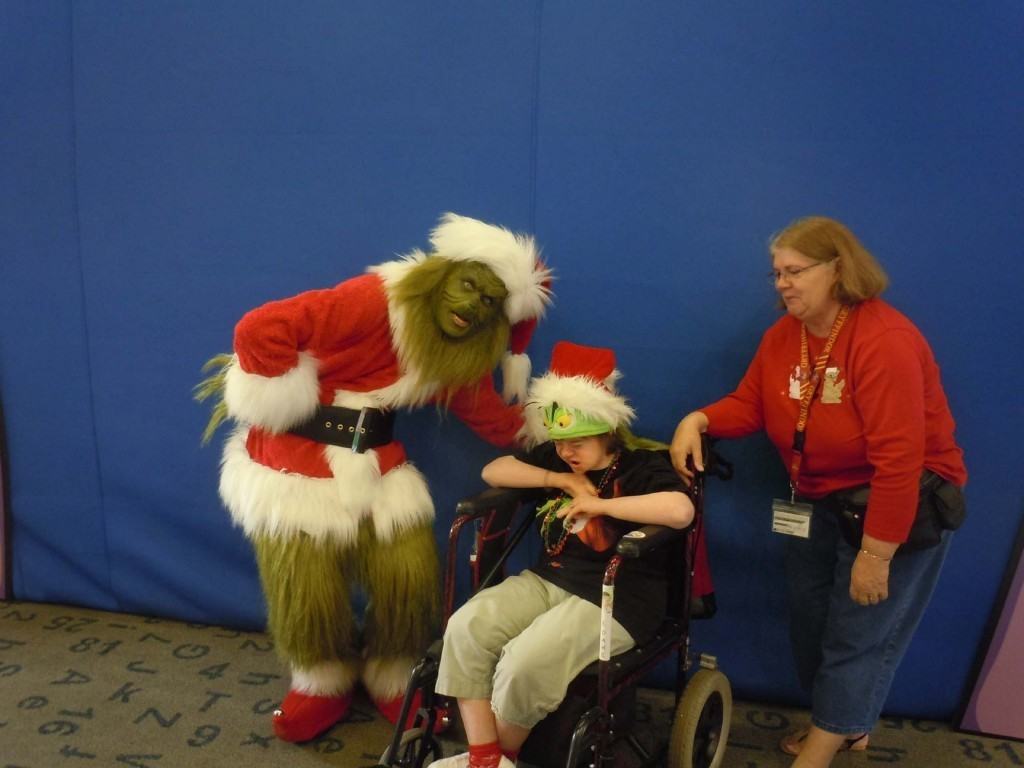 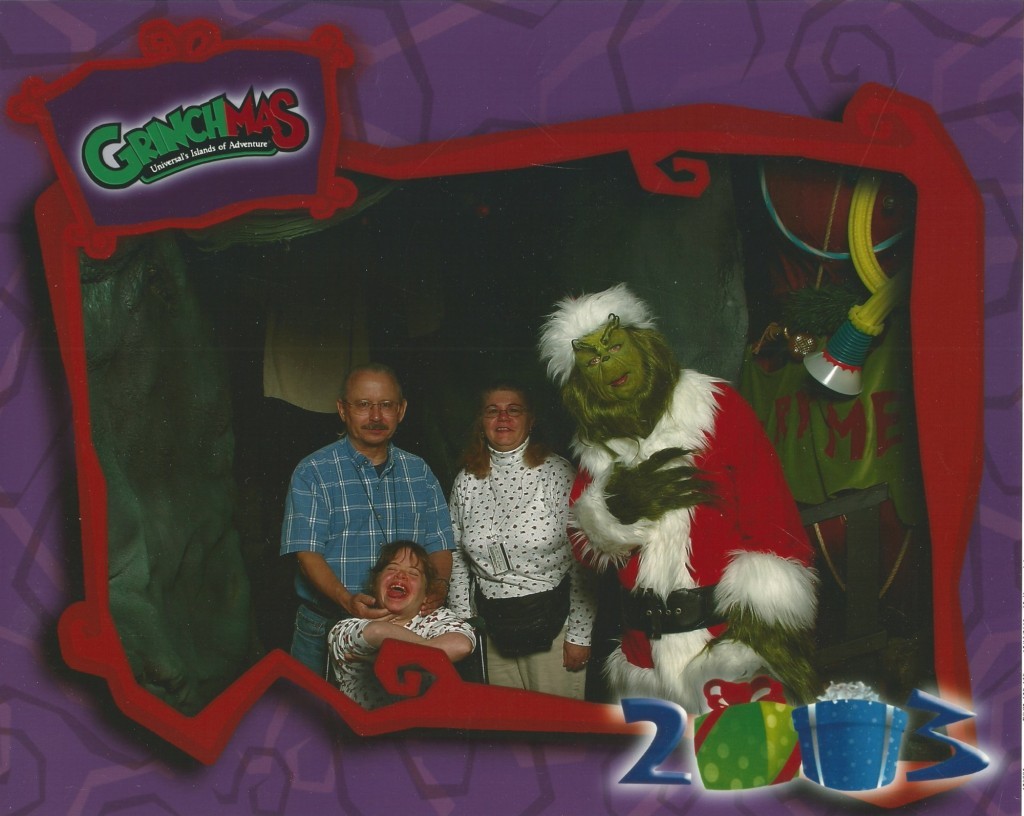 A Who-liday tradition you must NOT miss

Another favorite part of our visit is the musical, the Grinchmas Who-liday Spectacular. During the early years, the Whos’ story was told in three parts throughout the day on a small stage located between the Circus McGurkus Café Stoo-pendous and the book store. The final part of the play would be presented at dusk so when the tree was lit at the end of the story, the lights were ablaze as the sky darkened. It really was a beautiful site. 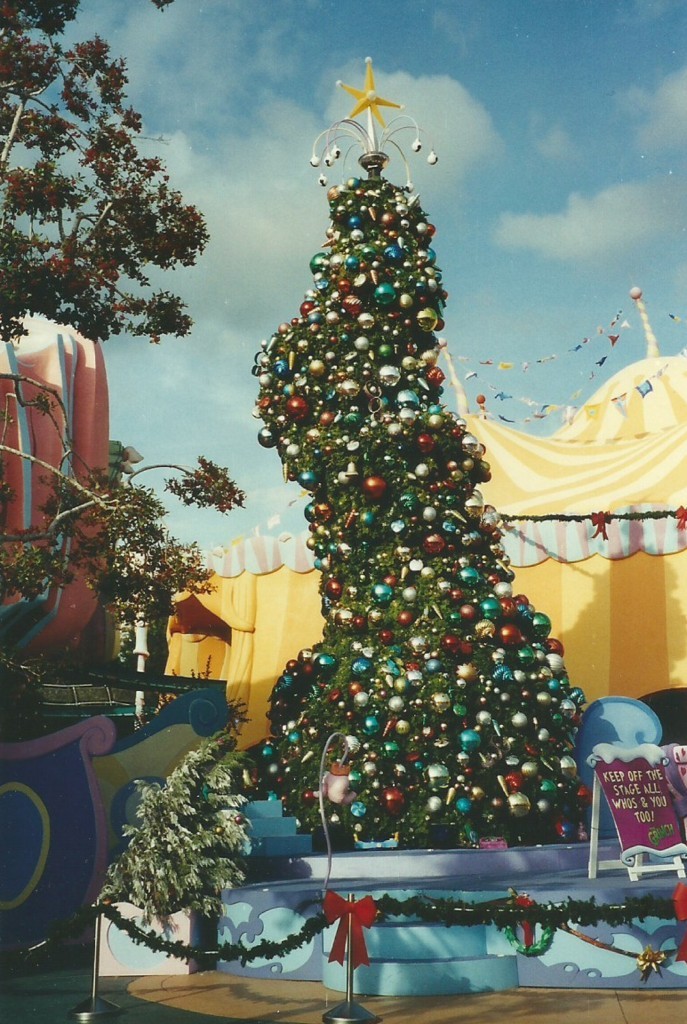 For several years now the Dr. Seuss classic has now been retold in various sound stages between Universal Studios Florida and Islands of Adventure. Just follow the signs near the Café for the entrance. Many of the songs are from the original TV cartoon version of How the Grinch Stole Christmas, also used in the movie. Show times will be listed in the in-park guides available as you enter the park.  The music is by Mannheim Steamroller, so you know it has to be exciting, melodic, and memorable; you just might be tempted to sing along. It will keep even the youngest child enthralled. For guests with hearing disabilities, a Sign Language Interpreter signs the entire show (check the park map for times as one will not be available for every show). Wheelchair seating is in the front row of the audience bleachers. If your child is sensitive to some sounds, I would also suggest bringing their noise-reducing earphones, just in case. And yes, Max is a real dog. 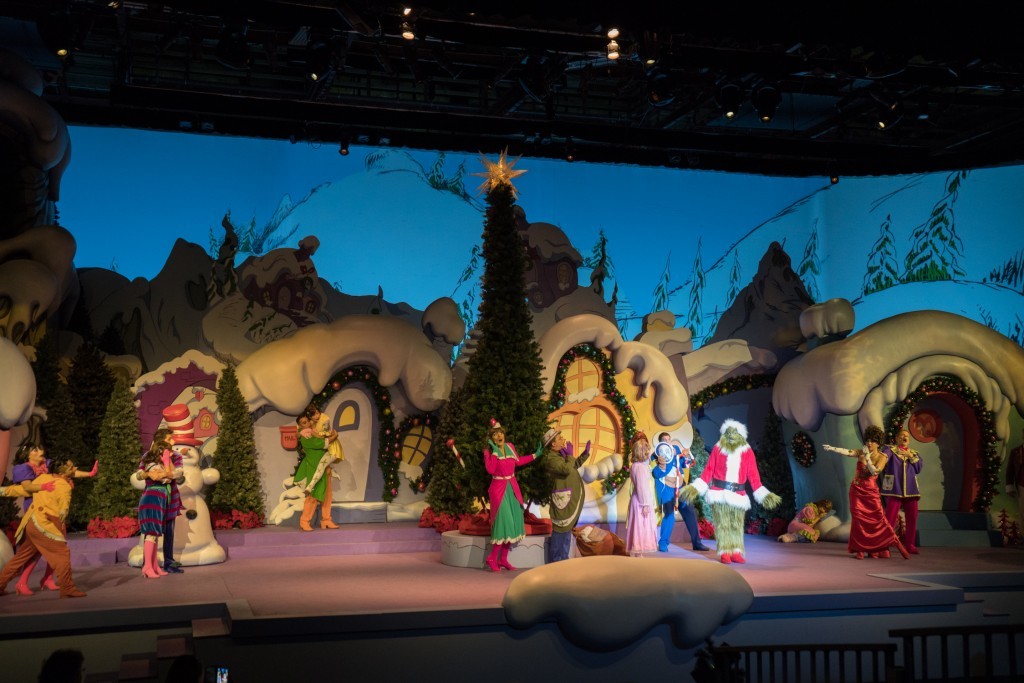 How The Grinch Stole Christmas 2015 at Universal Orlando Resort.

You can see photos from an earlier performance in the photo gallery at the bottom of this post along with other photos we’ve taken over the years.

Don’t forget – all the rides are very easy to ride for those with disabilities. If you scroll down the OI Complete guide to Attraction Assistance for special needs families page, you’ll find the special boarding procedures for some of them.

For us, Christmas just isn’t Christmas without a visit to Grinchmas. I hope you’ll consider it a must for your family, too! Merry Grinchmas to all!

When was your first visit to Grinchmas at Islands of Adventure? Sound off in the comments below.

Grinchmas through the years – photo gallery

Universal Attractions that NEVER should have closed, NEED to close, or MUST stay open!