Back in 1992, when Universal first began to sketch out the expansion that would turn its single-park Universal Studios Florida into the full-resort Universal Orlando, the company went to great lengths to design Gotham Island, home to Batman (and the original version of what is Marvel Super Hero Island today).

Featuring a great many interesting proposals, details, and hidden gems, we’re continuing our archeological dig into the theme park land that never was, guided once again by Jeff Tucker, who originally wrote about Gotham in an insanely in-depth eight-part series for Comics 101. 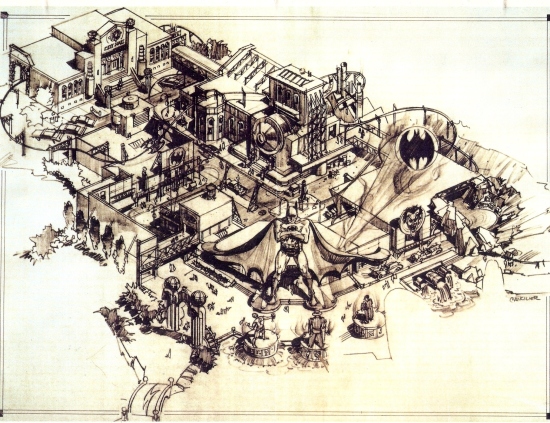 In the previous installment, we examined what the land’s attractions and restaurants would’ve entailed. This time, we’re exploring the best of the rest, from the gift shops to what could easily – and surprisingly – have been the single most immersive feature of any theme park at the time: the Bat-nightclub.

If you thought everything up ‘til now was enough to successfully challenge Marvel Super Hero Island, you haven’t seen anything yet.

Just as with the number – and range – of rides and eateries at Gotham Island, Universal wanted to have a similar versatility to the true money-maker of any theme park land: the ubiquitous gift shop.

Although not as thematically engaging as, say, eating your dinner next to the Joker and Lex Luthor, these retail establishments still provide more than their fair share of atmospherics, exclusive features, and, even, hidden surprises.

Easily the most impressive of the shops – and that’s saying a lot – Brainiac’s Bookstore is situated in a giant curved spaceship that’s ripped straight out of the 1930s. Patrons enter up an escalated ramp through the vessel’s rocket booster, and the motif continues once inside: a model of an alien solar system doubles as the store’s lights, a retro control panel acts as its main counter, and handrails function as the metal racks that display a wide assortment of DC comic books, original art pieces, and limited-edition prints.

The most intriguing feature, however, lies up above, with the domed roof and observation platform, which is ringed by rounded windows and features a series of Kryptonite laser guns, which are actually telescopes that allow guests to see into all the rest of Islands of Adventure.

Described in the proposal as a “bizarre palace,” this impressive store features stone steps that lead up to a black-and-gold-trimmed entrance that is flanked by two large panther statues. 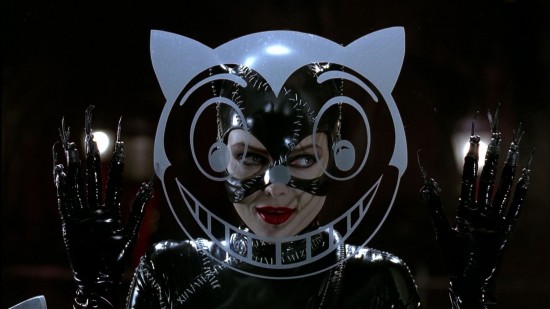 If the exterior fails to make a statement, the interior of Catwoman’s Lair doesn’t let up. Overstuffed couches, gold candelabras and chandeliers, velvet wall coverings, fake fur rugs, and exotic plants all exude a delectable poshness – which would have perfectly mirrored its high-end selection of handbags, shoes, hats, belts, costume jewelry, and day planners.

Straight out of the original Batman from 1989, Dark Knight Gifts – which features the largest selection of Bat-merchandise on the planet, the notes proudly proclaim – is a gloomy, cathedral-like building with tall rectangular windows and a heavy steel appearance, thanks to the metal beams that cut across the ceiling. 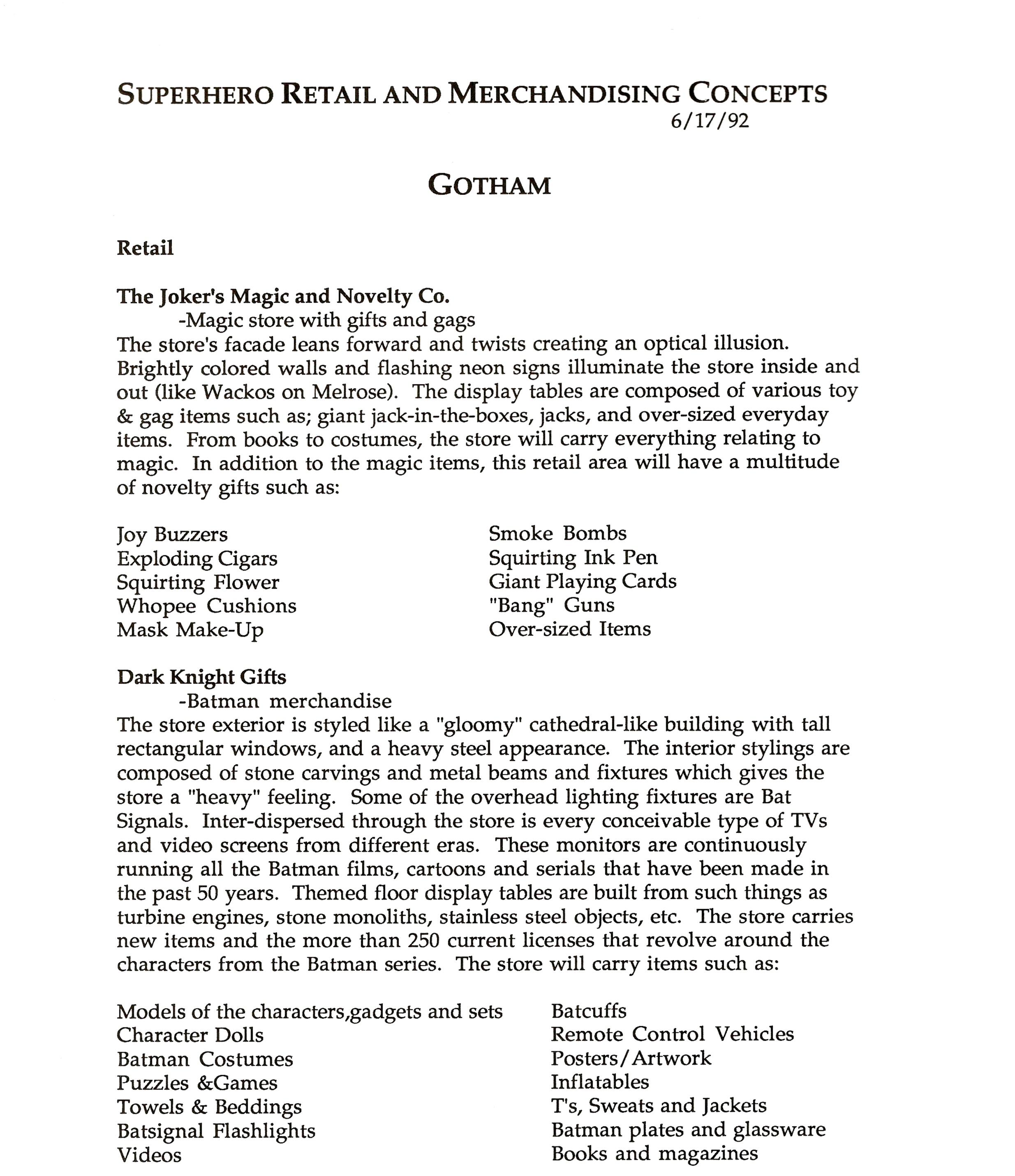 Large stone carvings, stainless steel sculptures, the occasional turbine engine, and television screens that display every filmic incarnation of Batman, from the 1940s serials to the ‘90s animated series, are interspersed throughout the neverending shelves of apparel, puzzles, action figures, and Batcuffs (more on these in just a moment). And just as a finishing touch, lights embedded in the floor cast Bat-signals onto the ceiling way overhead.

The Joker’s Magic and Novelty Co.

Set up in a LexCorp warehouse, with sawhorses and crates deployed as impromptu shelves, Lex Luthor’s Super Villain Store looks like a highly temporary operation that can be packed up and moved off to another secret location at the first sign of trouble from Batman or the Justice League. Strewn throughout are wanted posters, barred windows, and, of course, the merchandise itself, which ranges from the more generic (breakaway handcuffs and time bomb alarm clocks) to the more character-specific (Two-Face’s lucky coin, the Penguin’s trick umbrellas, Luthor’s glowing Kryptonite).

The Riddler’s Universe – Riddle Me This!

Just behind the giant Jack-in-the-box that plays ominous organ music (and which has the Riddler pop out every half-hour) is the Riddler’s Universe, which carries – what else? – riddles of every stripe, from puzzles to Rubik’s cubes. 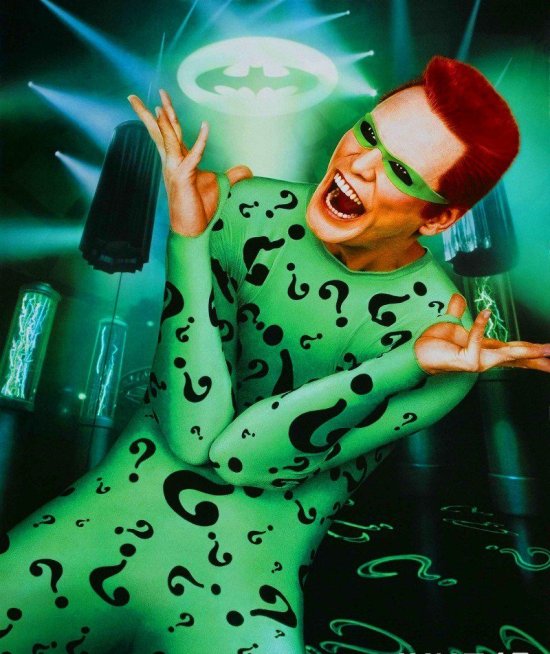 The Riddler, as depicted in 1995’s Batman Forever.

But the real star here is how the riddle theme plays out across literally the entirety of the store. Outside, in between question-mark-shaped windows, the shop’s large doors are fashioned in the shape of torn-out pages from a joke book, with the answers etched into their glass. Inside, the floor and ceiling are done in color-coded squares, with the bottom ones containing riddles and the corresponding top ones featuring the solution. And some of the merchandise comes in the form of green mystery bags, each brandishing a riddle that hints at its contents (sorry – all sales are final).

While attractions, restaurants, and gift shops form the thrust of Gotham, what would a theme park land be without the obligatory carnival games?

Unfortunately, this particular part of the Batman lineup isn’t quite as strong, individually, as the rest, though, collectively, it still offers a fun moment of respite from all the Batmobile-driving and Metropolis-eating action.

And the coolest part of the Justice League Games? Their venue – Superhero Stadium, which is themed as Superman’s Fortress of Solitude. Larger-than-life statues (including Supes’ parents, Jor-El and Lara), ice sculptures, and various props from the most famous DC comic storylines separate each of the games, each of which is dedicated to a different member of the League: 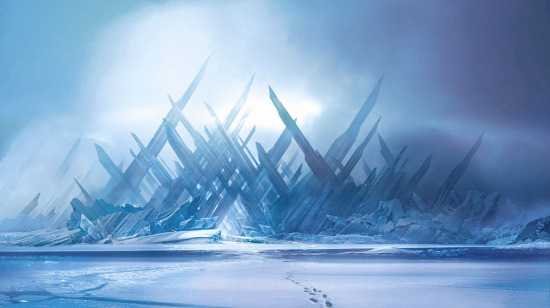 Superman’s Fortress of Solitude, from 1978’s Superman: The Movie.

​​
The Bat-nightclub
Just when you thought that you had seen it all – Gotham Island contains one final major component, something which not only helps to distinguish it from all the other theme park lands of the time, but something that still notably differentiates it from all the rest of Islands of Adventure to this day: the Batcave nightclub, which just might be the single biggest element ahead of its time.

(Come to think of it, even after the Wizarding Worlds of Harry Potter and the upcoming Skull Island, Universal still hasn’t attempted anything quite like this.) 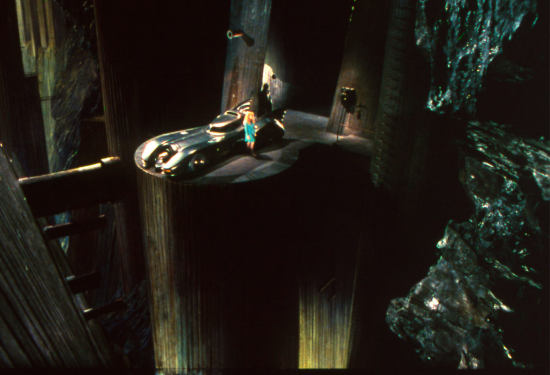 After entering the library of stately Wayne Manor, guests are served cocktails by Master Wayne’s staff and are left to mingle and explore its large leather couches and cathedral-esque ceiling. Once the requisite number of individuals have been allowed in, the doors close, the lights dim, and the Bat-signal can be seen shining in the sky above, visible through the skylight. The paintings on the walls slide away to reveal televisions, which display the latest music videos, and dance music starts to be piped in.

One of the staff activates a secret entrance hidden behind a giant bookcase by manipulating a wall sconce. A high-tech elevator is revealed, and guests ride it down into the Batcave – a journey which only covers one story but which, not unlike Harry Potter and the Escape from Gringotts, is made to feel like hundreds of feet in duration. 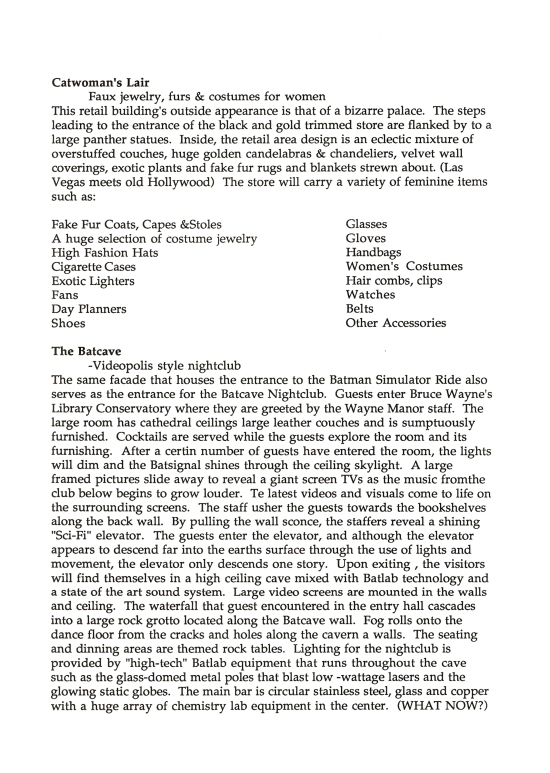 The design document for the Batcave.

Even better are the additional touches. The bar is decked out as Batman’s lab, a waterfall plunges down into a grotto below, the dance floor is perpetually cloaked with fog, and the tables where guests can enjoy their drinks (and flirtations) are all carved out of rock.

From beginning to end, it’s hard to think of a more theatrically complete presentation, particularly for an item that has become so incredibly commonplace in the Western hemisphere.

Is it possible for Universal to ever dredge these plans back up for a future Islands of Adventure expansion (or, if the rumors hold true, a replacement for Lost Continent)? Alas, not likely, as the theme park rights for all the DC Comics characters have since been scooped up by Six Flags.

Still, as heartbreaking as it may be, it’s incredibly fun to talk a walk down yesteryear and, even if just for a moment, take a spin on what could have been.

In case you missed it, be sure to check out our first Batman article about the land’s attractions and restaurants. Then visit the OI Blog archive for even more on Universal Orlando history.