We spoke a few months back about Disney’s plans for Hollywood Studios, which included the much-fabled Star Wars Land taking over all of Echo Lake and Pixar Place (which currently consists of just one [highly popular] ride) expanding to include all of the Backlot Tour’s former area. This Is Infamous has just last week followed up with an exclusive report of its own, and while the vast bulk of its scoop corroborates this game plan, it also goes a few steps further, detailing what to more exactly expect from the makeover and, even, adding one further killer intellectual property to the list of future offerings: Indiana Jones.

All told, the site says that the Disney Company’s board of directors has just greenlit an unbelievably massive budget for the park’s makeover: $3 billion. Just to put that in perspective, Universal won’t spend that much money on Universal Orlando resort until 2018 or 2019 – and the company has been spending a lot each and every year to put in a whole slew of new rides, hotels, and, even, a water park. If this is an accurate estimate, then Disney isn’t fooling around with what would be the most expensive – and expansive – theme park construction job in history.

(It should be noted – as we extensively did on this week’s Orlando Informer Podcast – that there are a great many across Internet Land who have taken issue with This Is Infamous’s reported price tag. For a full discussion on why I think the exorbitant price tag isn’t that far-fetched at all, be sure to give the podcast a listen [or watch!].)

So, what does six years’ worth of Universal-level spending get you? Let’s find out.

First, what’s leaving?
Of Hollywood Studios’s current roster of attractions, the latest rumor has a huge percentage of them getting the axe – about 7 out of the current 14 (and, no, this doesn’t include the Magic of Disney Animation tour and gift shop, which will both be shutting down by the end of next month). This definitely includes Muppet*Vision 3D and the park’s twin stunt shows, Indiana Jones Epic Stunt Spectacular and Lights, Motors, Action! Extreme Stunt Show, attractions which have long been rumored to be on the chopping block (even out on the West Coast, in the case of the Muppets).

Just what, then, is supposedly staying? In addition to the likes of Beauty and the Beast – Live on Stage and the ever-popular Fantasmic, the main leftovers include:

(An important caveat to Jedi Academy’s inclusion on this list: unlike all of the other entries, this show is, as has been consistently rumored for the past three or four years, purportedly going to be getting a transplant to a new [indoor] location and a major facelift in the form of new special effects and, even, a next-generation Yoda audio-animatronic.) 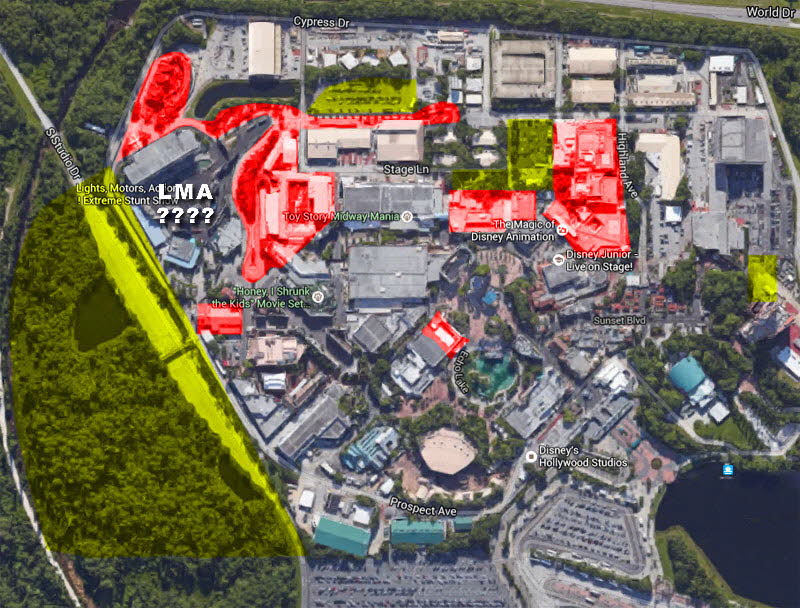 Just to put this in better perspective (literally), Screamscape has mocked up a photo of Hollywood Studios, with all the red areas representing the currently-closed attractions (no, not including the newly rumored ones) and the yellow areas showing potential zones of future expansion or construction.

Star Wars Land
The long-in-gestation theme park land to end all theme park lands will, according to This Is Infamous, consist of an additional two experiences to the two already-in-place attractions – although the site admits it has no idea what these new rides will entail. (Other rumors from other publications have ranged from everything from a speeder bike chase through the forests of Endor to a walk-through recreation of the Millennium Falcon, replete with a Chewbacca meet-‘n-greet.)

The most intriguing Star Wars nugget, it turns out, has nothing to do with the potential rides and everything to do with the land’s theming. With literally dozens of planets to choose from within the SW canon, the biggest question surrounding the project has been just what type of framework would Walt Disney Imagineering choose to erect for the new area. (Which is assuming, of course, that the company would opt to emulate the Universal/Wizarding World approach of taking one specific environment to painstakingly recreate; the other option being, obviously, to take the more time-honored route of simply doing an everything-jumbled-together-into-one mash-up overlay.)

Now we just may have an answer: Dagobah, the swamp world where Jedi Master Yoda lives out his many years of exile, is reportedly going to replace both Echo Lake and Gertie the Dinosaur. If accurate, it’s an admittedly strange decision (why not the gleaming towers of Coruscant, the very center of the galaxy? Or the sandy dunes of Tatooine, the most visited location in the SW mythos? Or the exotic beauty of Felucia?), although it may have more to do with matching the current park geography than with any creative considerations.

Of course, given the site’s further claim that there will potentially be a ton of dining and shopping options arrayed all around the area, it may very well be that Dagobah will simply be yet another attraction – a giant photo op and meet-‘n-greet location, for instance – and all the other planets (and movies!) will be getting their time in the twin suns, as well.

(The newly expanded) Pixar Place
This Is Infamous similarly doesn’t have any specifics on what new attractions will be added next-door to Midway Mania, but it does say that there will be three of them. Screamscape goes one step further and offers a list of previously rumored possibilities: a Finding Nemo-themed Crush’s Coater and a Monsters, Inc. “door coaster” (or, possibly, dark ride). Given the current success of Inside Out and the recent start of development on The Incredibles 2 – coupled with the Disney Company’s undying emphasis on multimedia synchronicity – there are many, many more possibilities on hand.

The only other tidbit offered by the site in this regard has to do with the possible mini-revelation that construction on these new experiences has already begun, snuggled safely away in the former territory of the Backlot Tour, hidden from public view. If this is true, don’t be surprised if the revamped Pixar Place will be the first new section of the park to open to guests, with Star Wars Land following some 12 or, even, 24 months afterwards.

Indiana Jones
The third and final new land will, the site says, be dedicated to Dr. Henry Jones, Jr. This is actually the skimpiest of all the reports, unfortunately, but it just may also be the juiciest: an updated version of Indiana Jones Adventure, which has long been considered one of the best dark rides in theme park history, is purportedly going to be the centerpiece of the new area.

Just what form these upgrades will take (a new ride vehicle? A bigger thrill element? An all-new queue to compete with Harry Potter and the Escape from Gringotts?) is entirely unknown, but should IJA be coming to the very same park with Star Tours, Tower of Terror, and a Pixar-themed roller coaster, Disney World’s weakest section could very easily become one of its very strongest.

Confirmations and intimations
All of this is, of course, quite a bit to take in, and, as mentioned before, many have received this report with the greatest amount of skepticism possible. It turns out, though, that we shouldn’t have too long to wait for an official confirmation: This Is Infamous reports that Disney’s $3 billion, ten-year overhaul will be revealed during August’s D23 Expo.

We’ll just have to wait to see what – if any – of these details are true until then.

Do you think all these plans will be enough – or that they’re even true? Sound off in the comments below.

Is the Hulk Coaster about to have a complete makeover?