Guests visiting Walt Disney World often return home with stories recounting a magical meeting with Mickey or Cinderella, sometimes even stating that this character interaction was the highlight of the trip for their son or daughter. But at what cost?

When “Frozen fever” first swept through the parks in 2014, guests were waiting sometimes upwards of five hours in the standby queue to meet Anna and Elsa. The demand for these characters was so high that Disney even temporarily tested closing the standby queue and only allowing guests with FastPass+ to enter. While the hype has calmed down somewhat (or at least become more manageable), guests still have the option to utilize FastPass+ at Princess Fairytale Hall, Town Square Theater, Ariel’s Grotto, Epcot Character Spot, and Animal Kingdom’s Adventure Outpost. The Norway pavilion at Epcot is expanding to include a 13,000 square foot Anna and Elsa meet and greet building.

Guests who book their stay at a Disney Resort can schedule their FP+ reservations 60 days out. This may seem like a lot of work, but for some families, it truly is the highlight of the trip to see their child or family member interact with their favorite Disney character.

Why doesn’t Universal take a tip from Disney and add character meet and greets to their Express Pass? The answer is simple: they don’t need to! 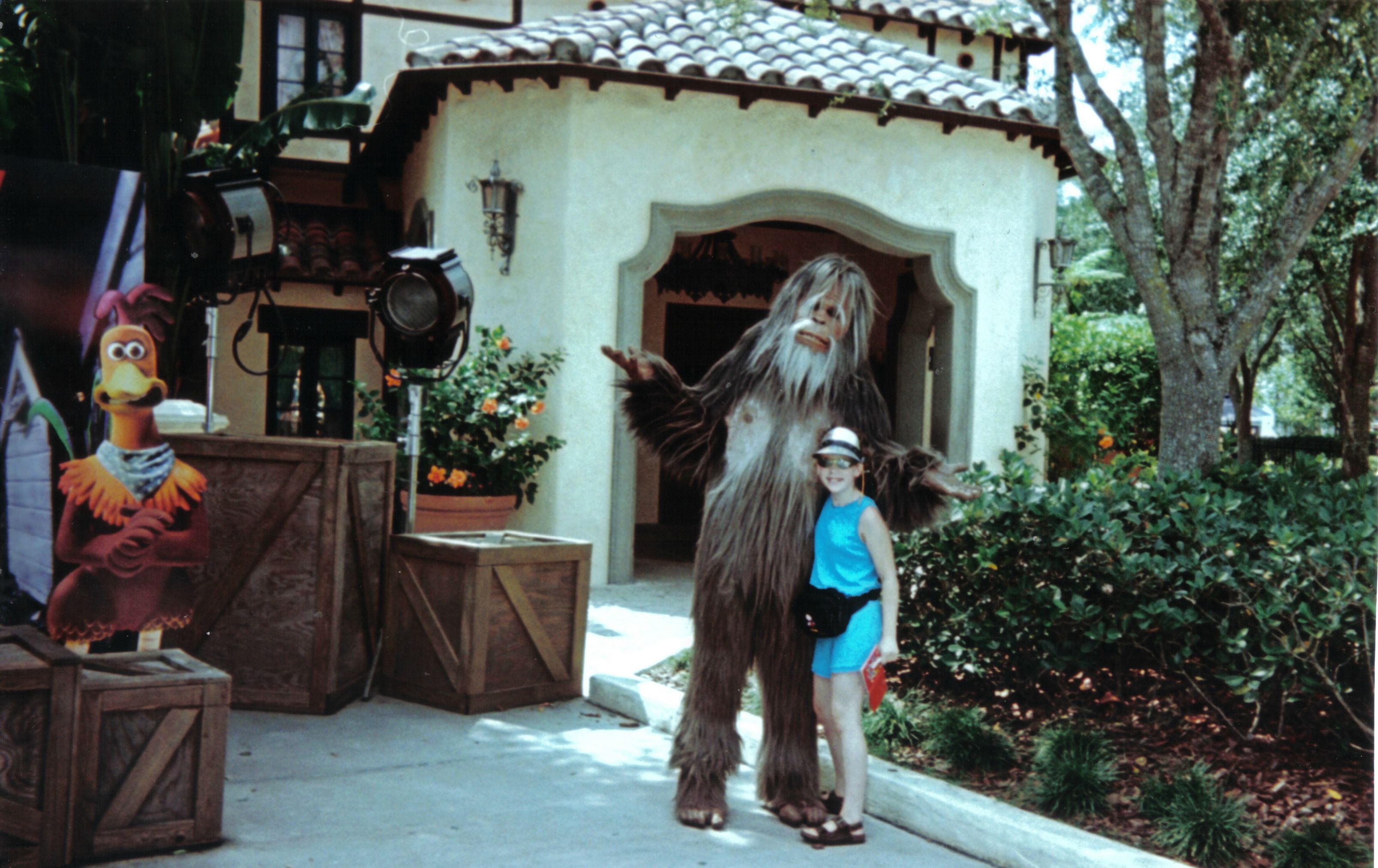 Harry of Harry and the Hendersons at USF, circa 2000

Universal uses a different tactic to immerse guests in a unique experience at the parks without having long waits. They use “roaming characters,” which are often found without attendants and queues. This was part of the original charm of Universal Studios Florida, where guests would simply stumble upon their favorite movie stars. Although the original line-up has changed over the years, characters such as Marilyn Monroe, Lucille Ball, Men in Black agents, and Doc and Marty McFly are some of the more common “stars” still seen throughout the park. Previous “stars” include Laurel and Hardy, the Marx Brothers, Frankenstein’s Monster, and Beetlejuice (who can still be found at Beetlejuice’s Graveyard Revue and occasionally out when the show is cancelled). Roaming characters may approach people and engage them in an impromptu skit. For example, Beetlejuice would often ogle over pretty women and make crude jokes.

Interestingly, some roaming characters simply wait for the guest to notice them. The Men in Black agents are notorious for this. They can sometimes be found sitting on park benches with blank expressions, sometimes even reading newspapers and chatting amongst themselves. This makes for a delightfully unique experience when Guests realize who they are, and they often have little or no wait. One additional magical touch is that the MIB agents very rarely have Frank the Pug with them, who will pose for photographs as well! (Otherwise, Frank can be found daily in the Animal Actors show.) 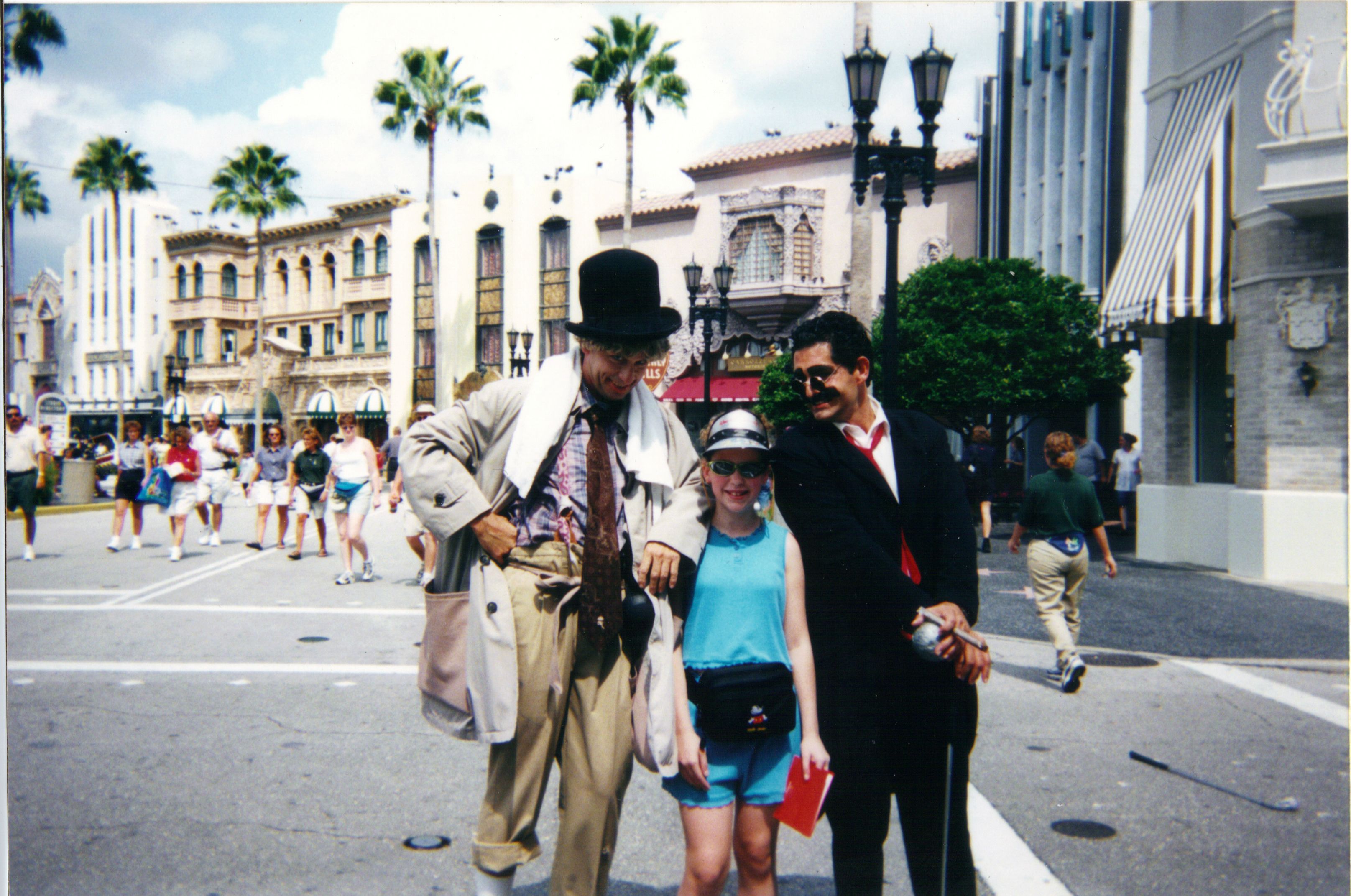 Harpo and Groucho Marx at USF, circa 2000

This isn’t to say Universal is totally queue-free or unstructured when it comes to character meet and greets. Guests may still encounter queues in some instances where a photo-op is used, such as with Shrek, Fiona, and Donkey, Spider-man, and the Transformers. One new experience that is offered (and unlike anything Disney has to offer) is the Raptor Encounter at Jurassic Park. 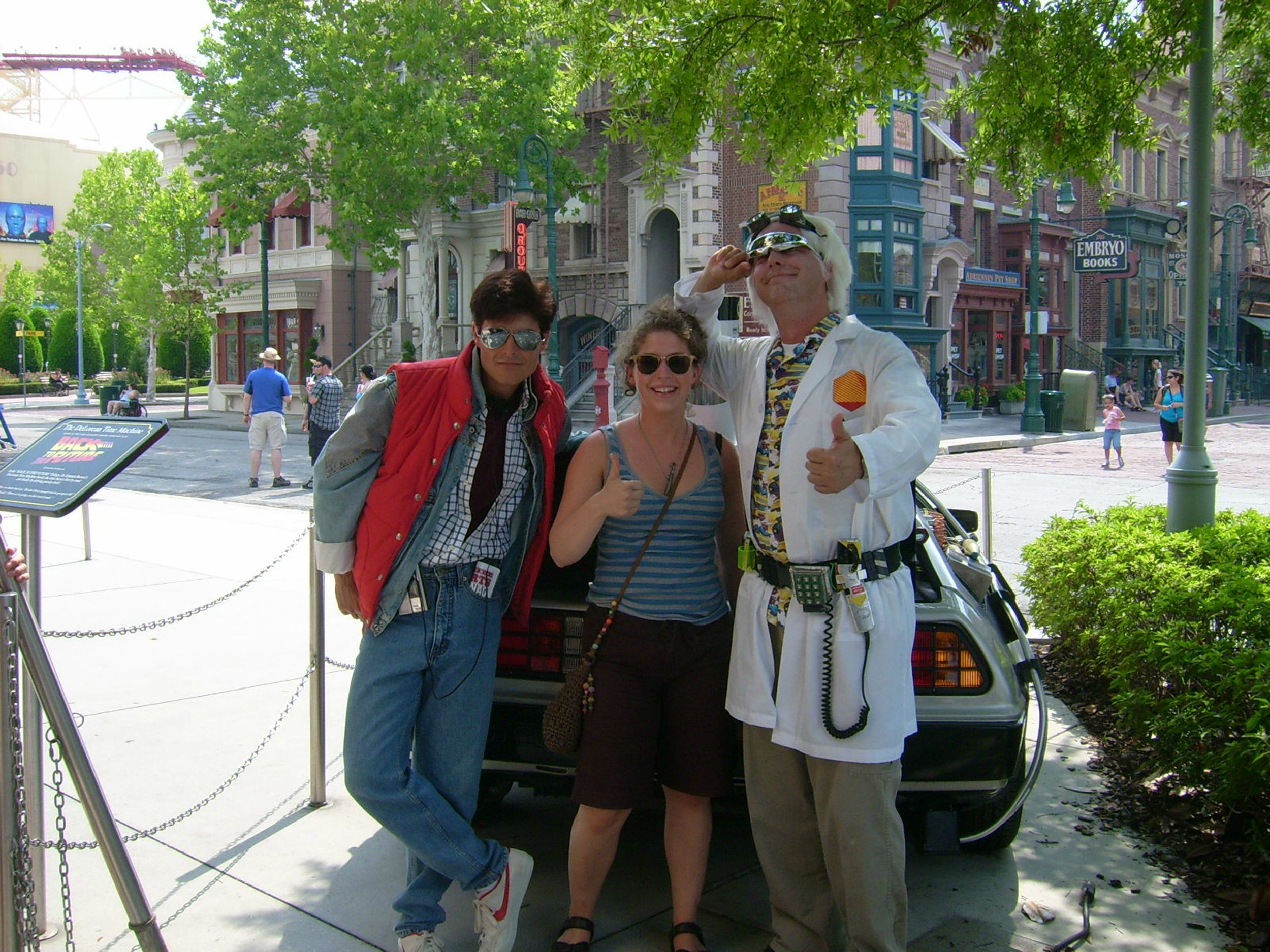 Marty McFly and Doc Brown sometimes hang out by the DeLorean.

Continue to the next page to learn more about Universal’s character offerings, and how Disney’s system may be transforming soon![page]Other unique experiences that Universal offers include the Minion Dance Party and the Superstar Parade. The latter offers children of all ages a chance to have fun up close with their favorite characters. Disney offers a similar “street party” atmosphere called “Move It! Shake It! Dance and Play It!” which occurs multiple times per day.

Disney World is famous for its character dining, which is great for families who do not want to wait in line to see characters. Instead, the characters come to you! Popular locations include the princesses at Cinderella’s Royal Table at the Magic Kingdom, Akershaus at Epcot, and Pooh and friends at the Crystal Palace. What some people may not know is that you don’t have to dine inside the parks to enjoy a character meal. Options outside of the parks include 1900 Park Fare at the Grand Floridian, Chef Mickey’s at the Contemporary Resort, Ohana’s at the Polynesian Resort, and Cape May Café at the Yacht and Beach Club.

While Disney World is predominantly all about queues, stationary locations, and character attendants when it comes to most of their meet and greets, they recently have tested out some new tactics to improve the guest experience. During mid-July, rumors are that Disney tested Flynn Rider and Star Wars Rebels characters in their parks as roaming characters, similar to Universal. The test was rumored to have been extremely successful. Will we see more roaming characters around WDW in the near future? It is definitely a possibility. 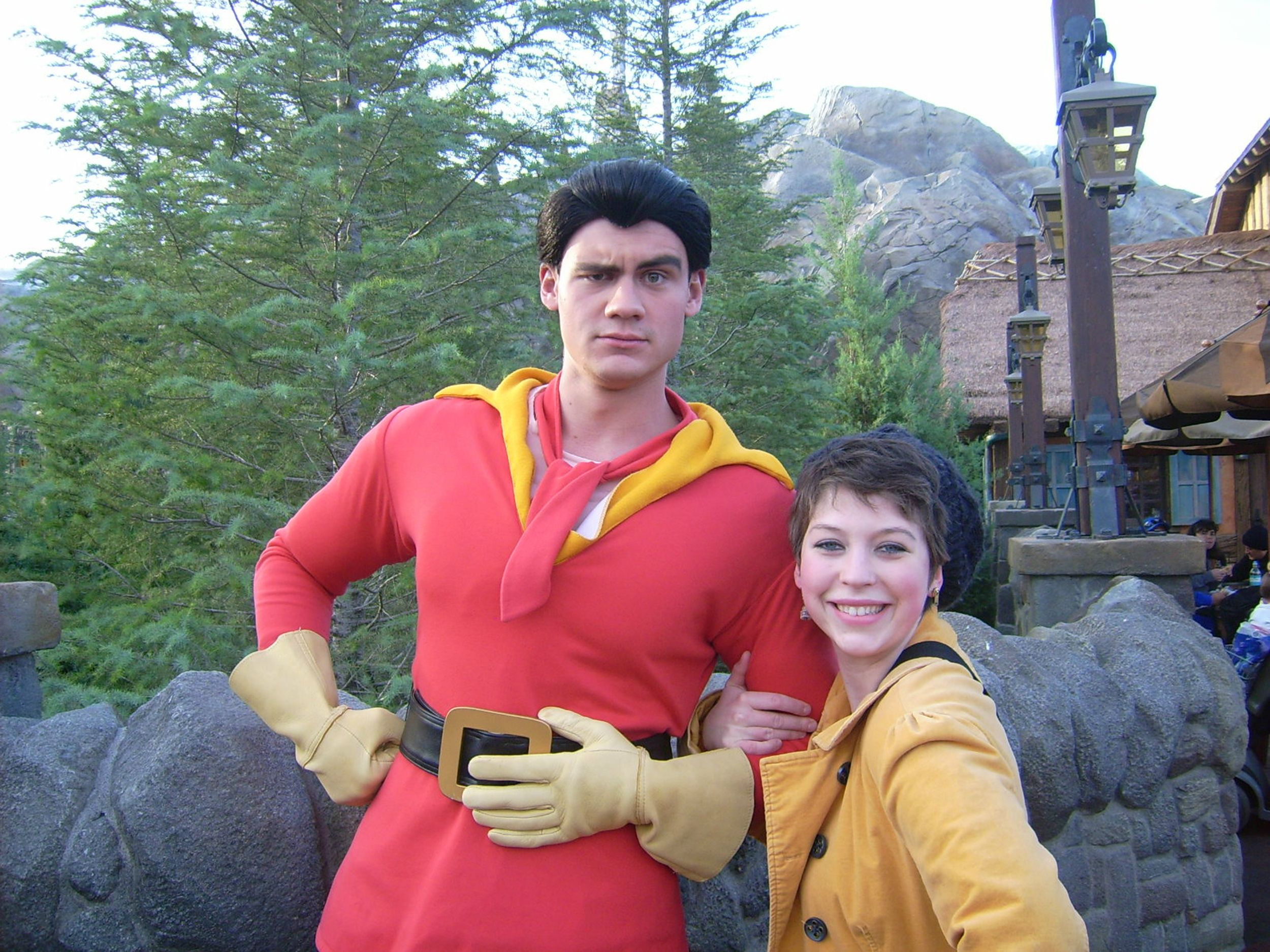 With Disney characters being some of the most well-known figures on the planet, it is difficult to discern whether having roaming characters at the world’s busiest theme park would actually be a good idea. As a prime example, Peter Pan at Disneyland Park in California actually uses a this style of meet and greet. Peter never stays in one location too long and can often be seen peeking through bushes, jumping off of park benches and galavanting about the park. Because Disneyland’s Guest demographic is a bit different than its Florida counterpart (Disneyland is made up of more locals than national and international tourists), it seems that it would be tricky to include roaming characters at their parks. On the other hand, Universal does this rather successfully.

But, will this work for more “attractive” Disney characters such as Flynn Rider? Will Disney World management be able to keep fangirls at bay? So far, the results have been reported as positive, but only time will tell as Disney constantly tweaks the guest experience.

Do you like how Disney and Universal do character meet and greets? What would you like to see them do differently? Should Walt Disney World loosen their grip on queues and character attendants for a more spontaneous experience? Sound off in the comments below.