Can you remember the first time that you ever witnessed one of Walt Disney World’s magical fireworks displays in person? Did you not cry when you first heard the soundtrack to ‘Wishes’ while watching each and every firework explode into the night sky?

Maybe that second question is only a yes from me, but despite how many times I have seen ‘Wishes’ or ‘Illuminations’ inside of the parks in my lifetime I simply cannot get enough of each and every show. In fact, fireworks are what inspired me to purchase my first DSLR camera back in February of 2015! I was dying to capture some of that Disney magic that was shot into the night sky with my own camera.

I purchased a Nikon D5300, borrowed a Velbon tripod from the 1970s, did as much research as I could on firework photography, and ventured into the parks to practice. Thinking that I knew exactly where I wanted to shoot first, I headed for the Partner’s Statue in front of the Magic Kingdom for some nine o’clock Wishes, and claimed my spot at six o’clock. At first everything was alright, with everybody standing around me, we all seemed to have a mutual understanding that I would be shooting the fireworks and that they would stay out of the way. Well, that all changed as soon as the Main Street Electrical Parade began.

Phones went up, people started standing on that ledge around the statue, and well, the rest is history; three hours of my life were wasted, and I was crushed. However, it didn’t end at the Magic Kingdom. At EPCOT, I tried shooting ‘Illuminations’ near a railing in between the Mexico and Norway pavilion, and though I did get a spot up front, people would not stop bumping into my tripod and ruining my long exposures.

As for Disney’s Hollywood Studios, I chose to shoot some Frozen Fireworks from the front of the park, near ‘The Crossroads’ building for my first time. Surprisingly, the crowds were not bad at all. However, the fireworks were obscured by some of the buildings, blocking the full view of the show that I was hoping for at the time.

It was a very frustrating process trying to locate photographable areas of the parks where people would not affect my photos, but I have finally mapped out some of my favorite spots around the parks, and I am here to pass on some of my these viewing locations to all of you! 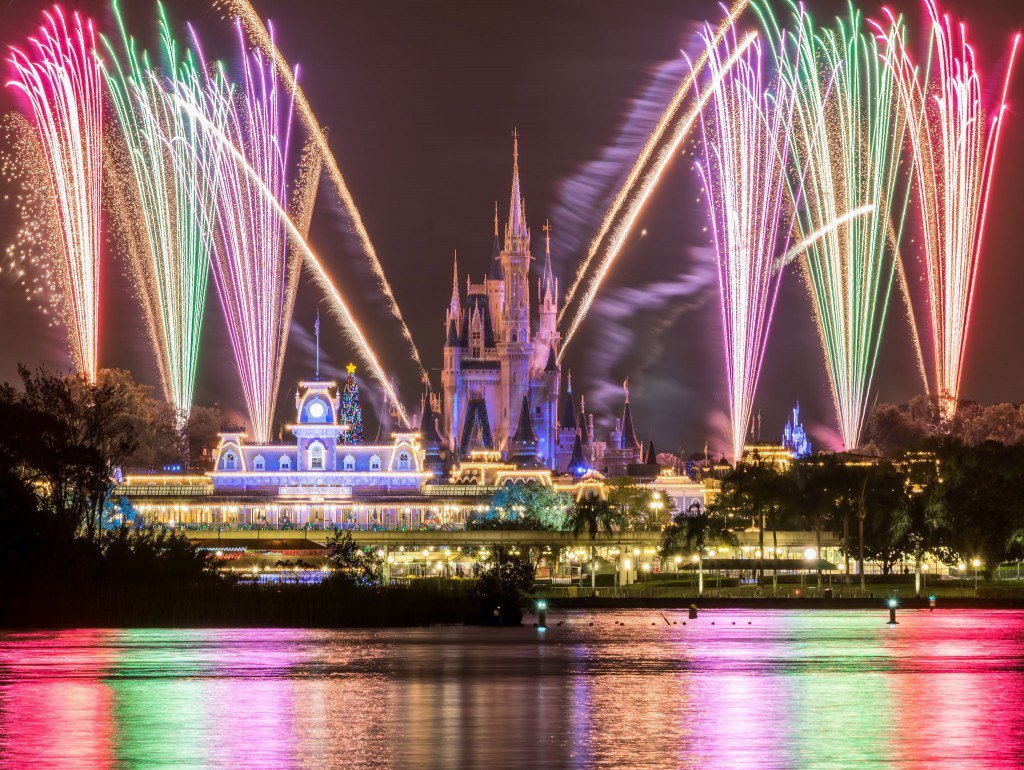 Many people do not think to look outside of the theme parks to view Wishes, and I totally understand. It definitely takes away from the magic of the show. With that said, there are virtually no crowds at the Transportation and Ticket Center ferry dock, and the music is still audible via speakers located around the TTC. 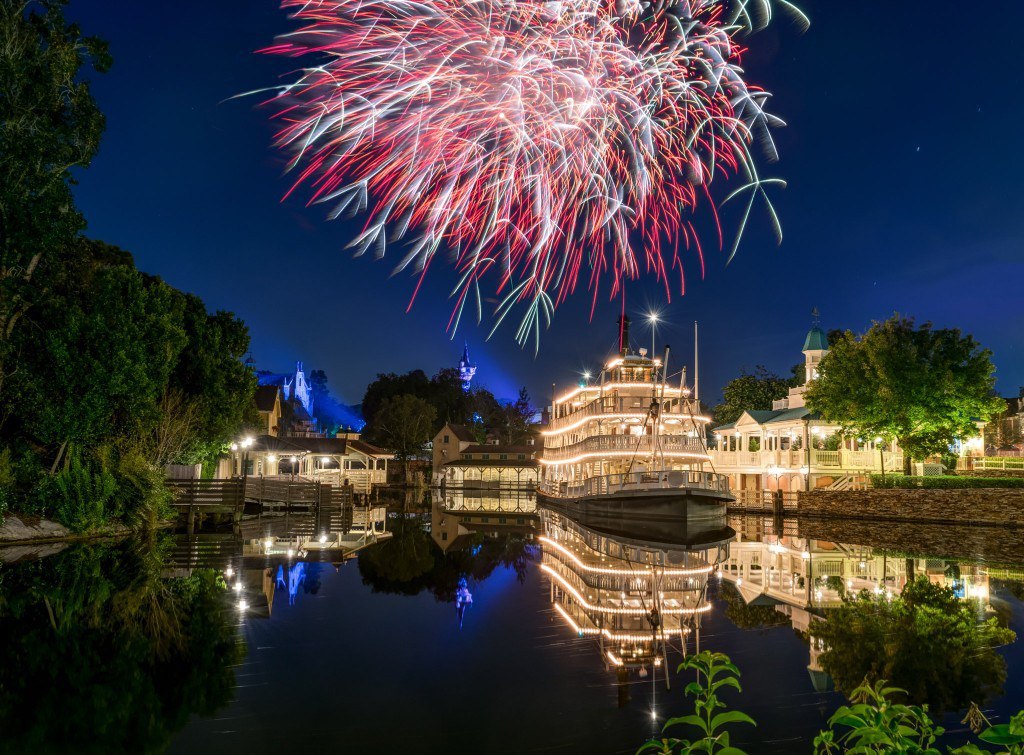 Fireworks at The Liberty Belle

There is a bridge that runs along the water, separating Tom Sawyer’s Island from land, that is less traveled as ‘Wishes’ begin. This location gives you a great foreground and a great view of the higher fireworks. However, you do miss the lower fireworks that fire off around Cinderella Castle.

3. Under the Sea – Journey of the Little Mermaid 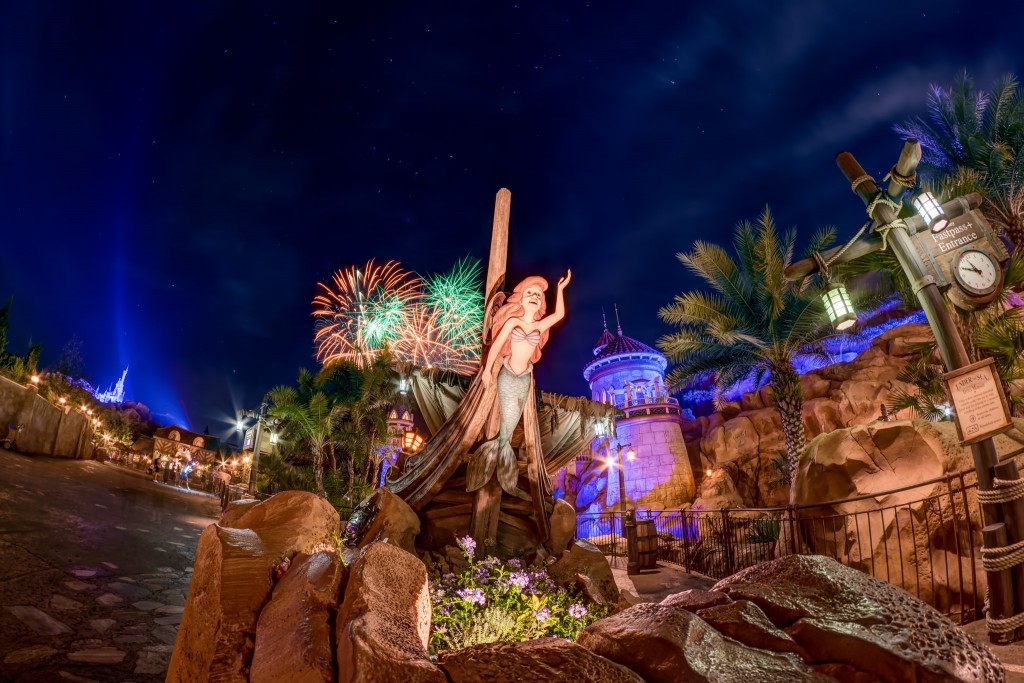 Fireworks at Under the Sea – Journey of the Little Mermaid

Directly out front of ‘Under the Sea – Journey of the Little Mermaid’ is a great view of the higher flying fireworks from the ‘Wishes’ fireworks show at the Magic Kingdom. Once again, you do not see the fireworks launched around the castle, but it is crowd-free! 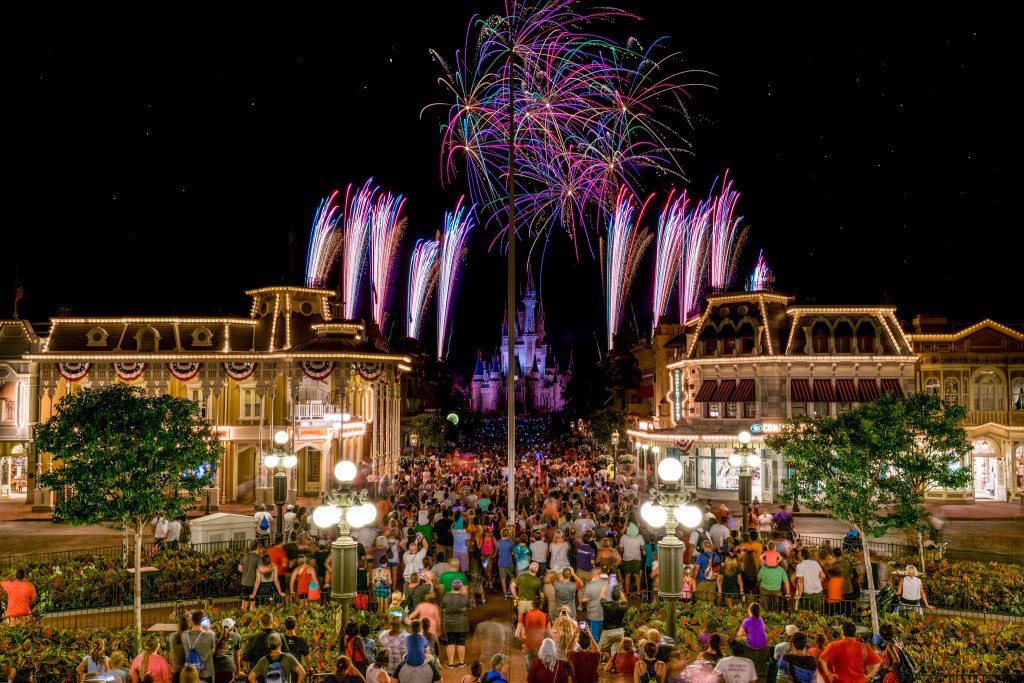 This is a great location to view both the Main Street Electrical Parade and the Wishes Fireworks from, but this location comes with a price. Starting three hours in advance people begin to camp out, holding their spot for the fireworks that they may never see again. This is a great location because you have a higher view and are not necessarily disturbed by the Main Street crowds. Though, it does get a little crazy right before the fireworks begin, it definitely beats the ground crowds! 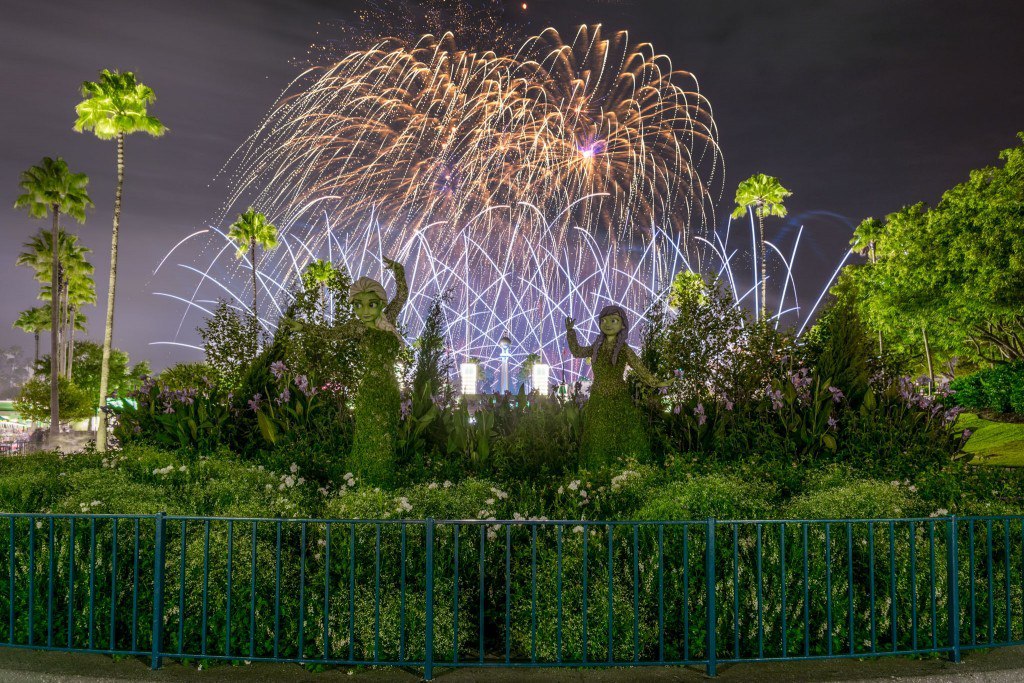 It just seemed right to view the Frozen Fireworks in front of the Anna and Elsa topiaries at the time, and with a majority of the crowds inside of the park, this location was virtually empty. The music was still audible, there were no crowds, and I was a few feet from the tram stop back to my car; it doesn’t get better than that!

6. Star Wars from Inside the Osborne Lights 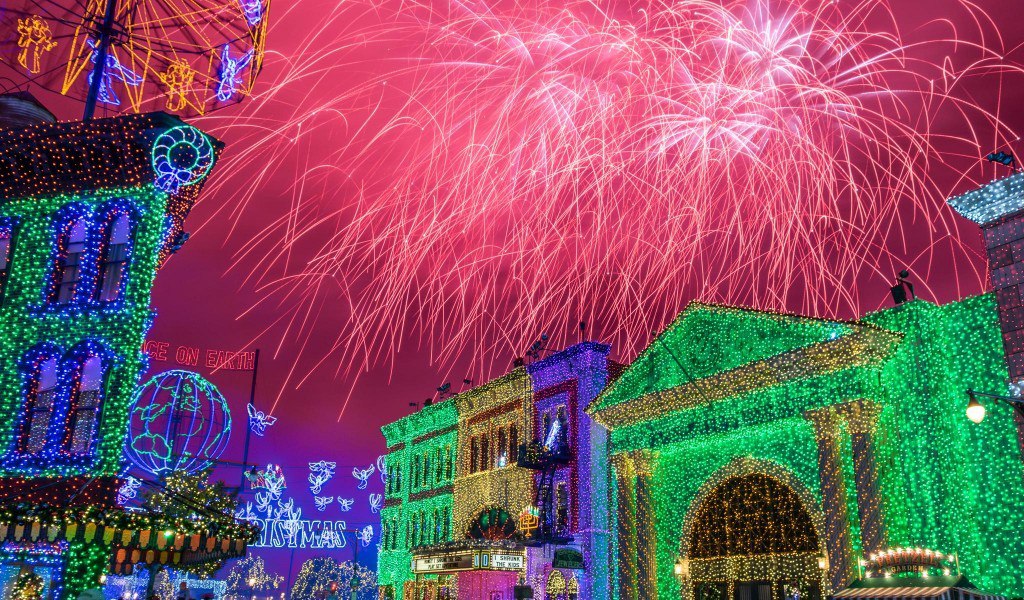 Star Wars from Inside the Osborne Lights

I’m not sure if this was allowed at any other point throughout the Osborne Lights’ final year, but for the last two days of this light display, people were allowed to stand, view, and photograph the ‘Symphony in the Stars’ fireworks show on the Streets of America. This was taken on the final night of the display, along with every other Disney photographer on the planet where the San Diego section intersects with the New York section.

7. Symphony in the Stars across the Water 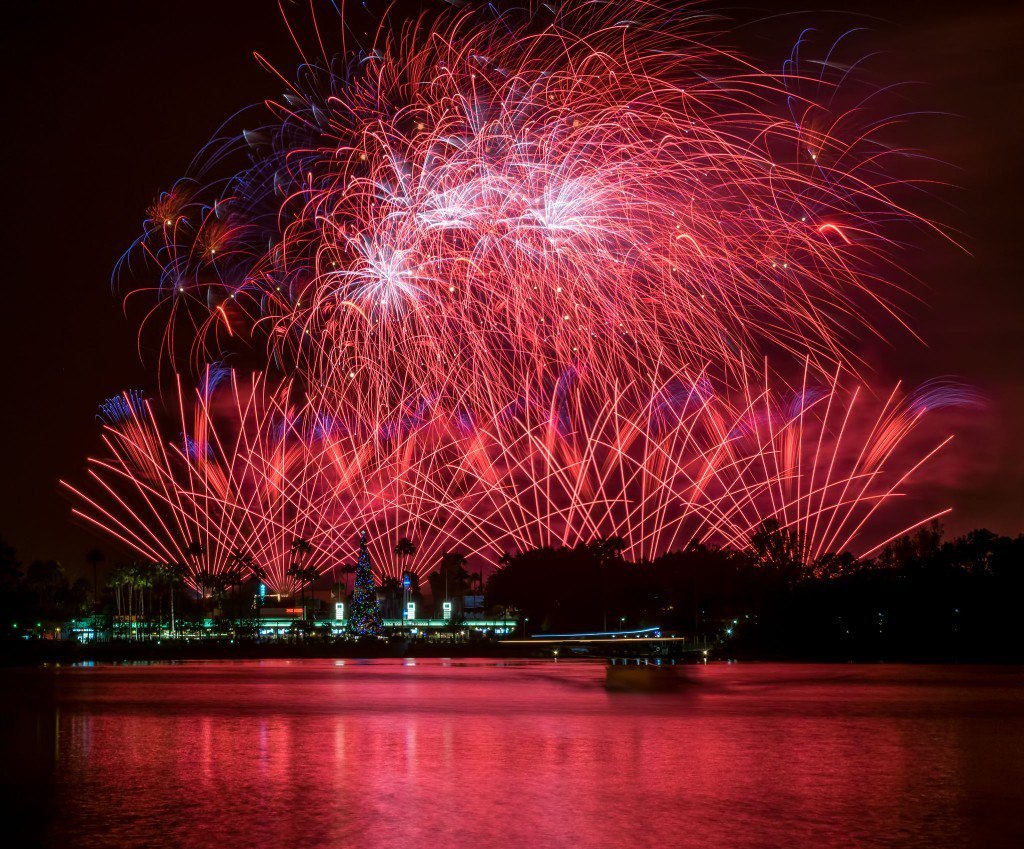 Symphony in the Stars across the Water

For this location, I had to travel down the path that connects Disney’s Boardwalk to Hollywood Studios. Just before we reached the overpass for guests on Buena Vista Drive, we turned around, stopped, and enjoyed this display with no guests around us. Though the music wasn’t as audible as it would’ve been if we were inside of the parks, you could still make out the music in each scene.

8. Illuminations from the Yacht club 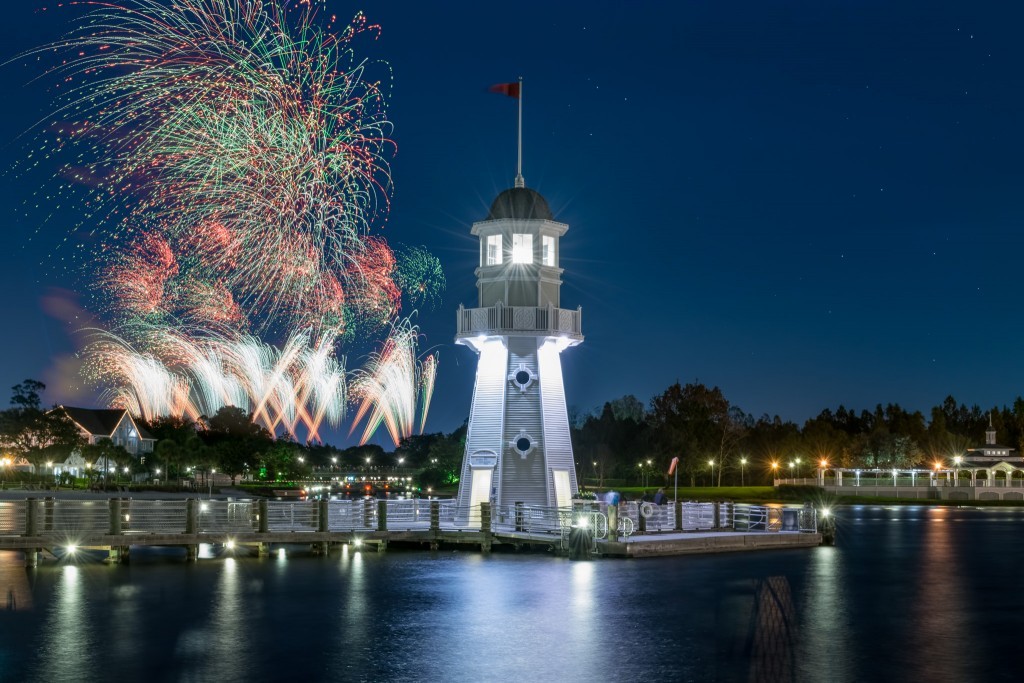 Illuminations fireworks from the Yacht club

Located at Disney’s Boardwalk, Disney’s Yacht Club and its lighthouse offer the perfect view of Illuminations inside of EPCOT. You do miss the fire barge scene, the globe in the lagoon, and the lower fireworks display, but the music is audible, and the crowds cease to exist from this area.

9. Illuminations from the Second Floor of Japan 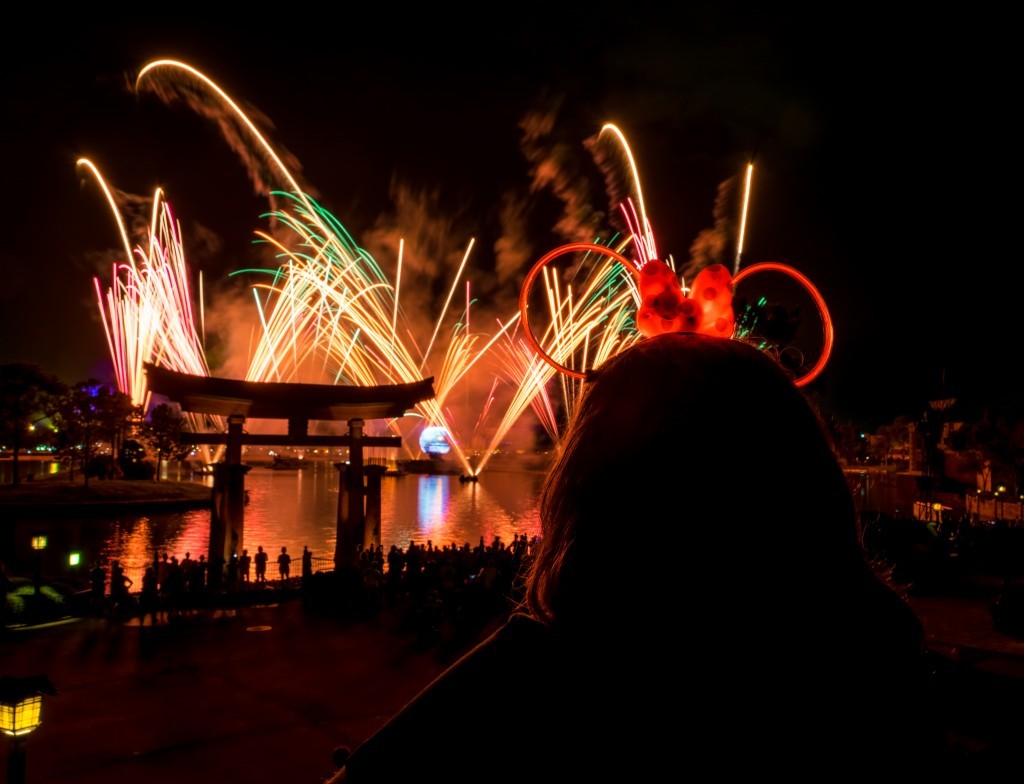 Illuminations fireworks from the Second Floor of Japan

Right outside of ‘Teppan Edo’ on the second floor of the Japan pavilion is a balcony that overlooks the pavilion and the lagoon. From here, you set yourself away from the crowds around the railings of the lagoon, while still being able to see every scene of Illuminations at an elevated location.

What is your favorite location to view Disney fireworks from? Let us know in the comments below.