You step into Diagon Alley and look around for the first time; what do you see? Attention to detail, simple, yet captivating colors, and a big metal bar going across the top of this Wizarding World. But if you take a few more steps just past the opening in the brick wall, you see a symbol that will live on in your memory forever: the dragon. The dragon really is my favorite subject to photograph inside of the Alley. Not only because of her massive size and great detail, (yes, if you ask any Wizard or Witch inside of Diagon Alley, they will confirm that the dragon is, in fact, a she) but because of the fire that she breathes!

In this group of photos, I will show you 9 different angles at which I have photographed this dragon that you may not have yet seen before. Some pictures do involve fire, while others simply involve capturing the beauty of this dragon at a time when she is in a more relaxed state.

1. Atop of the throne 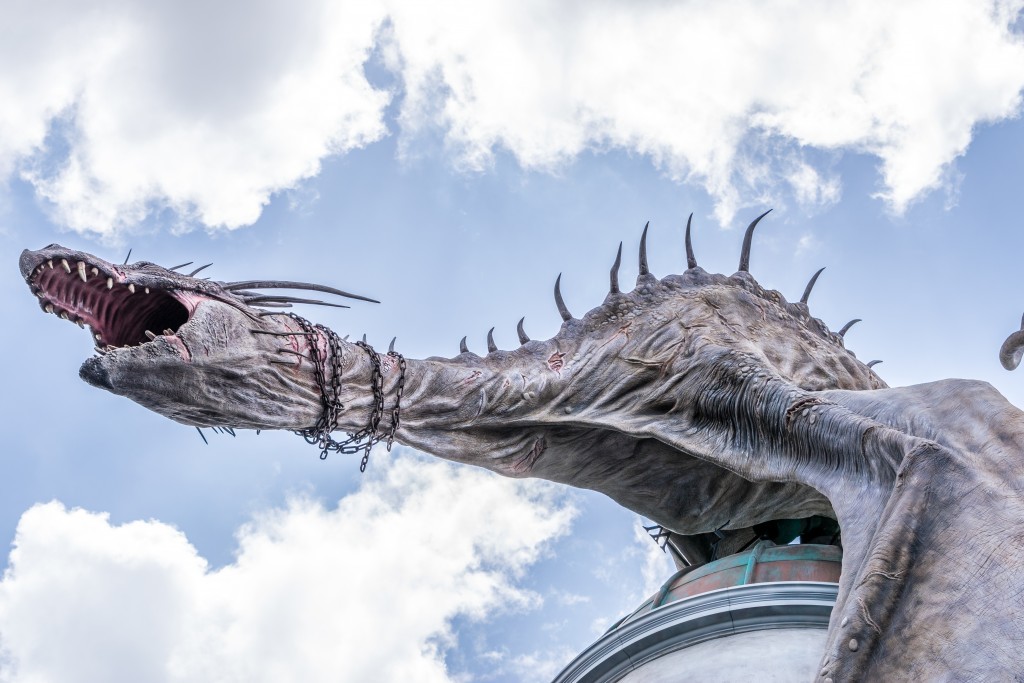 I have to admit, I am a bit jealous of the Gringotts Dragon protecting the Bank. Her view of Diagon Alley must be incredible from the top of this building. 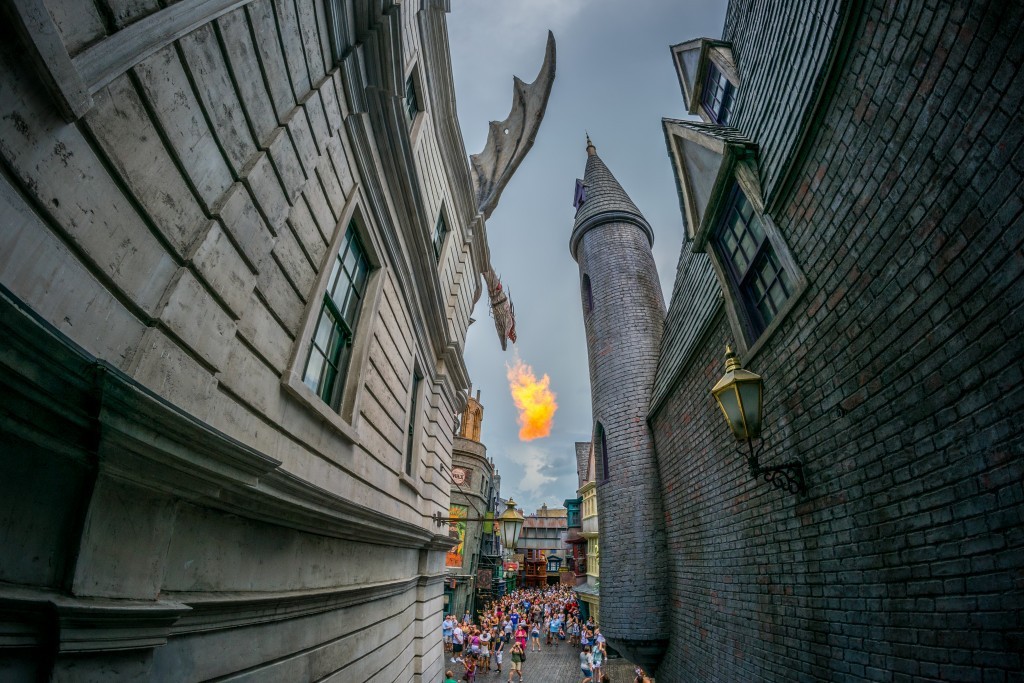 Anytime the Gringotts Dragon decides to breathe its fire, a crowd seems to gather and admire her in action.

3. Emphasis on the Fire 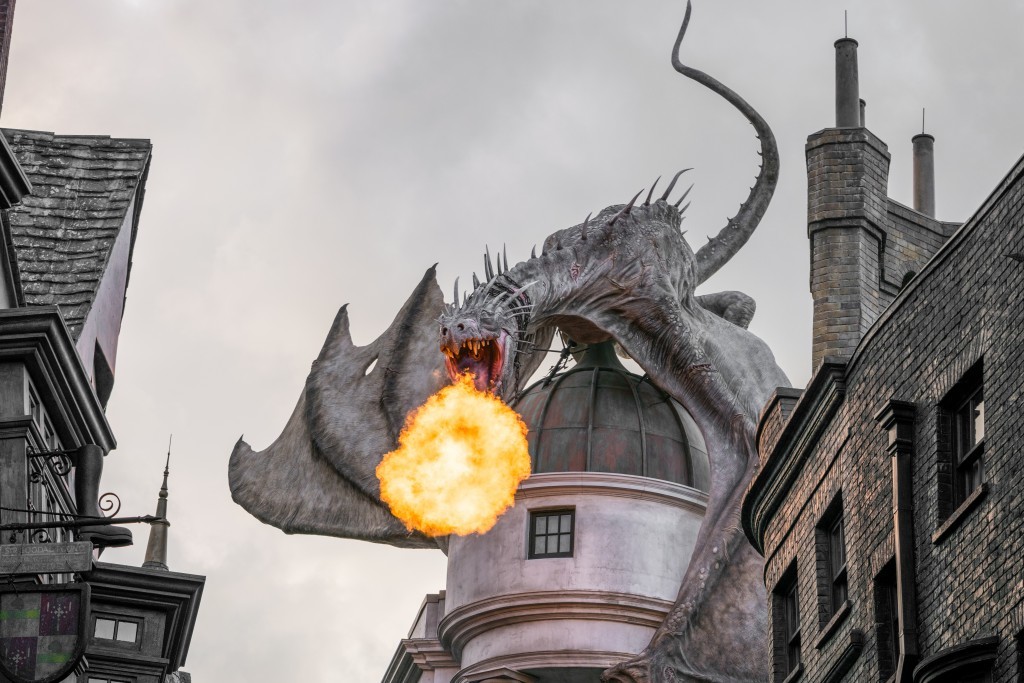 Most photos are a bust when it comes to a cloudy sky. In this case, the clouds seem to add the perfect mood to an already angry-looking dragon, showing off her fire-breathing.

4. Breathing Fire During the Blue Hour 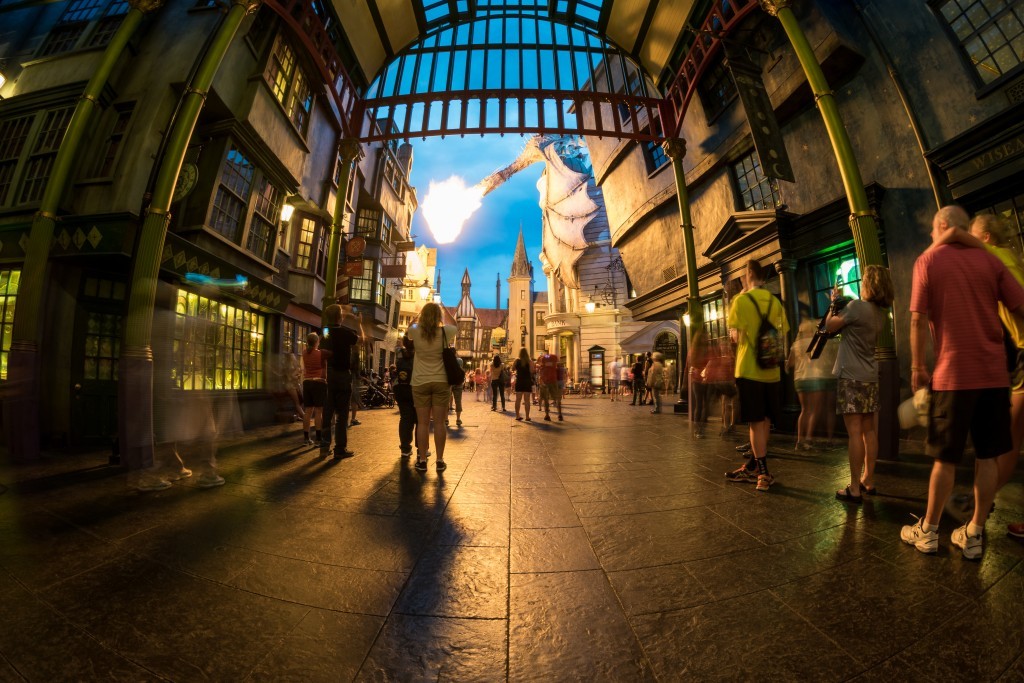 As the sun sets and night approaches, low shots inside of the alley with people around becomes no problem. It not only adds a sense of reality to the photo, but it additionally shows that even with lower crowd numbers, this dragon draws quite the glance with her fire.

5. In Range of Ollivanders 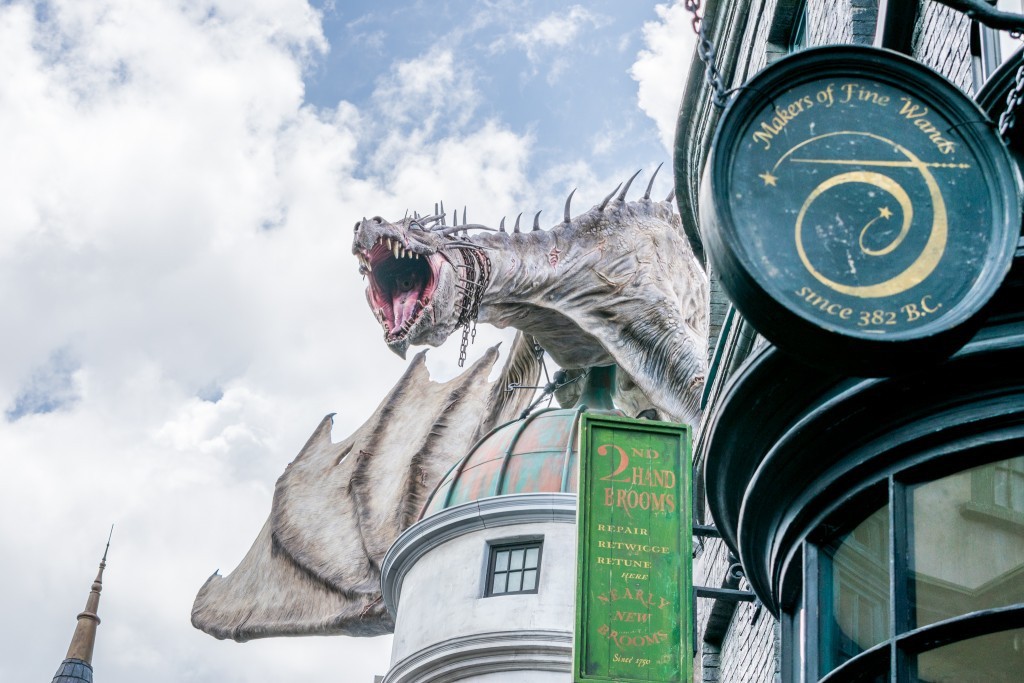 I’m sure that, if need be, the dragon could singe anybody attempting to steal a wand from Ollivander’s. (Not that wand theft is common inside of Diagon Alley.) 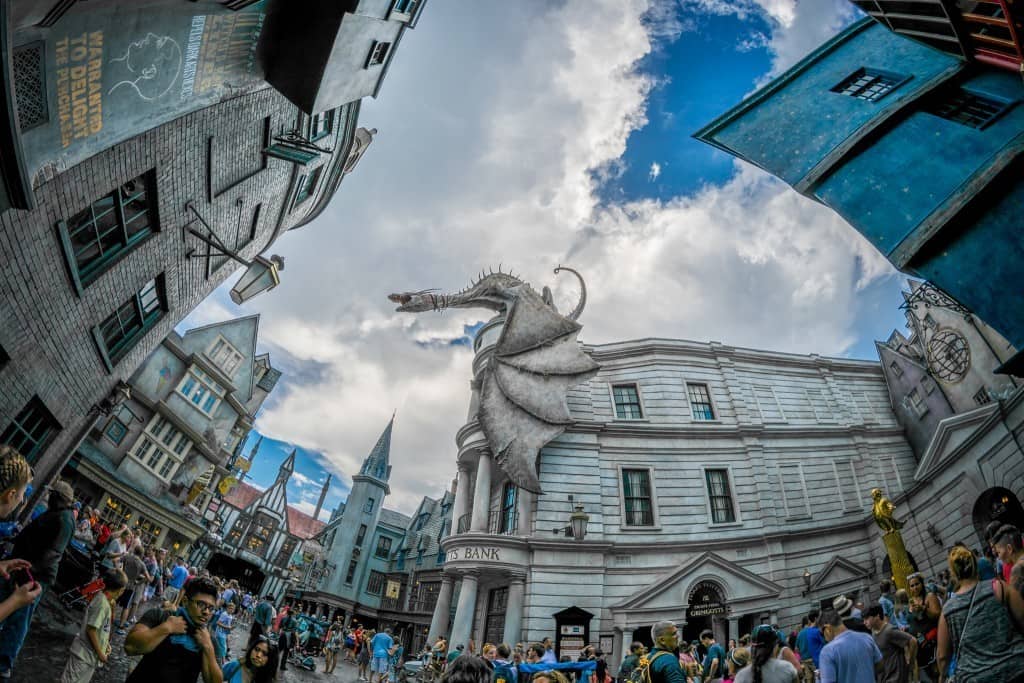 It may get crowded inside of Diagon Alley, but even so, this dragon stands watch over the bank that she loves most. 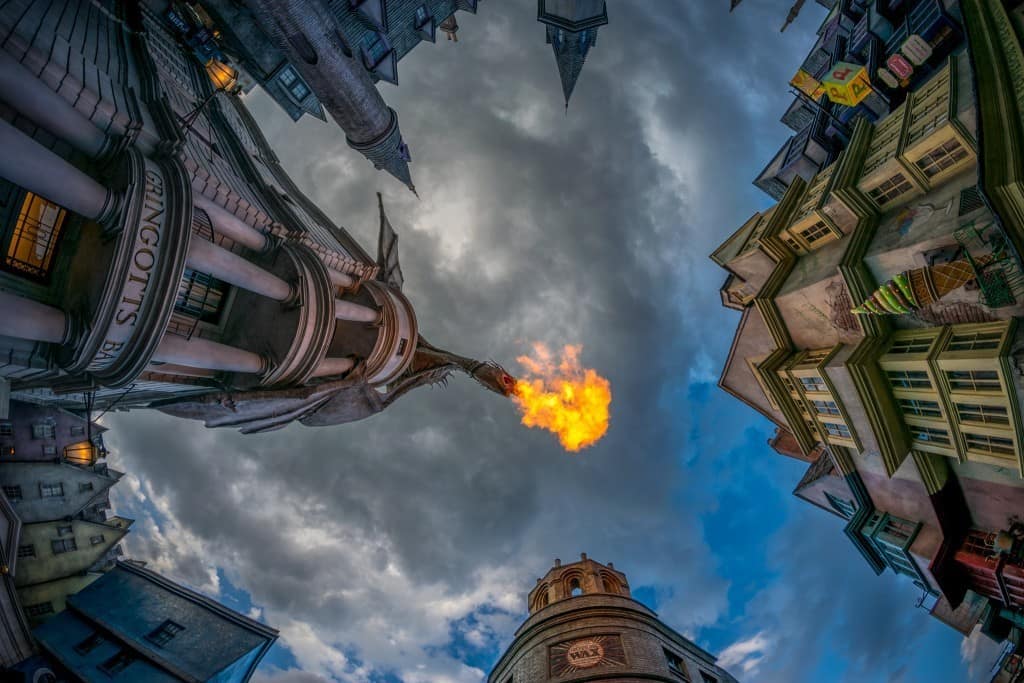 Looking up from underneath the dragon really gives you a different perspective of her, especially during one of her “fire-breathing episodes.” (Warning: Things may get a little heated.) 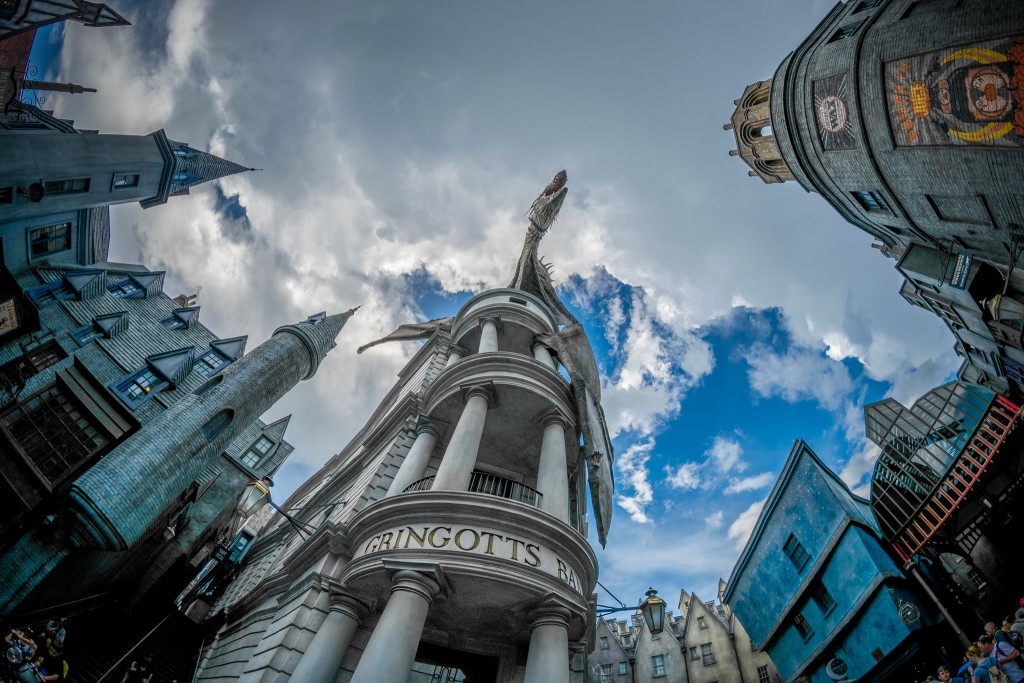 The Buildings surrounding the dragon really provide for some great drama in any photo involving the her. They truly set the mood of a photo, with their dark shadows and odd colors.

9. A Look at the Details 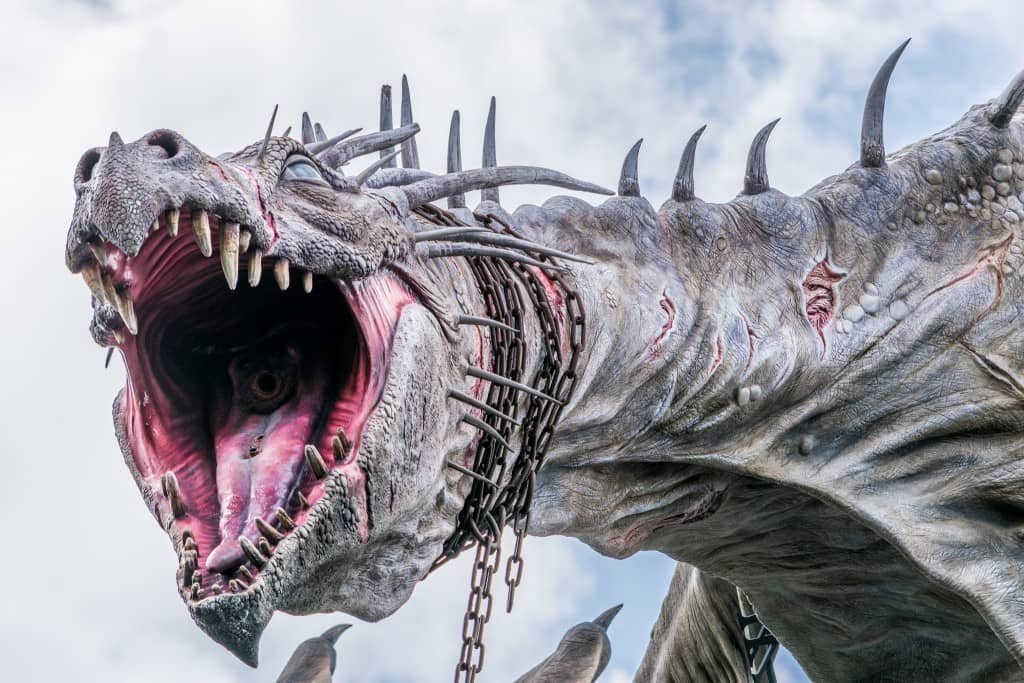 Upon closer inspection of the dragon, I can definitely say that she looks like she has seen some action in her day. Those cuts and scars say a lot about her time and experience at Gringotts.

We’ve shown you every angle of the Gringotts Dragon, now it’s time to plan your own trip to see her in-person. You can visit our Diagon Alley vacation planning pages or check out the other over 200 pages of Universal planning information!

If you don’t have the time to plan every detail yourself, Orlando Informer Travel can help! They can assist you with your trips to Universal, Disney, and more. Best of all, their services are free to you. Seriously. To get in touch, simply call (844) ORL-INFO or email them, or learn more by visiting Travel.OrlandoInformer.com.

What’s your favorite picture of the dragon? Sound off in the comments below.