5 things Universal can learn from Disney

In a previous OI Blog post I shared 5 things that Disney could learn from Universal. It’s only fair that I turn the tables. After all, one of the best places a business can look for inspiration is the competition.

Disney is the reason theme parks as we know them exist. Walt Disney World is the reason Orlando transformed from orange groves, cattle land, and military bases & equipment manufacturing into the most attended vacation destination in the country. So what could Universal learn from the mouse house down the street?

5 – In-park advertising signage
The first time I walked into Universal Orlando’s parks as a new annual passholder, nearly four years ago, I was immediately struck by the visual difference between Walt Disney World and Universal Orlando. Overall, Universal’s parks are more exciting, but in many ways less immersive. There are quite a few instances in which we are jolted out of the theme, the alternate reality, and made to quickly remember we are indeed in a theme park. 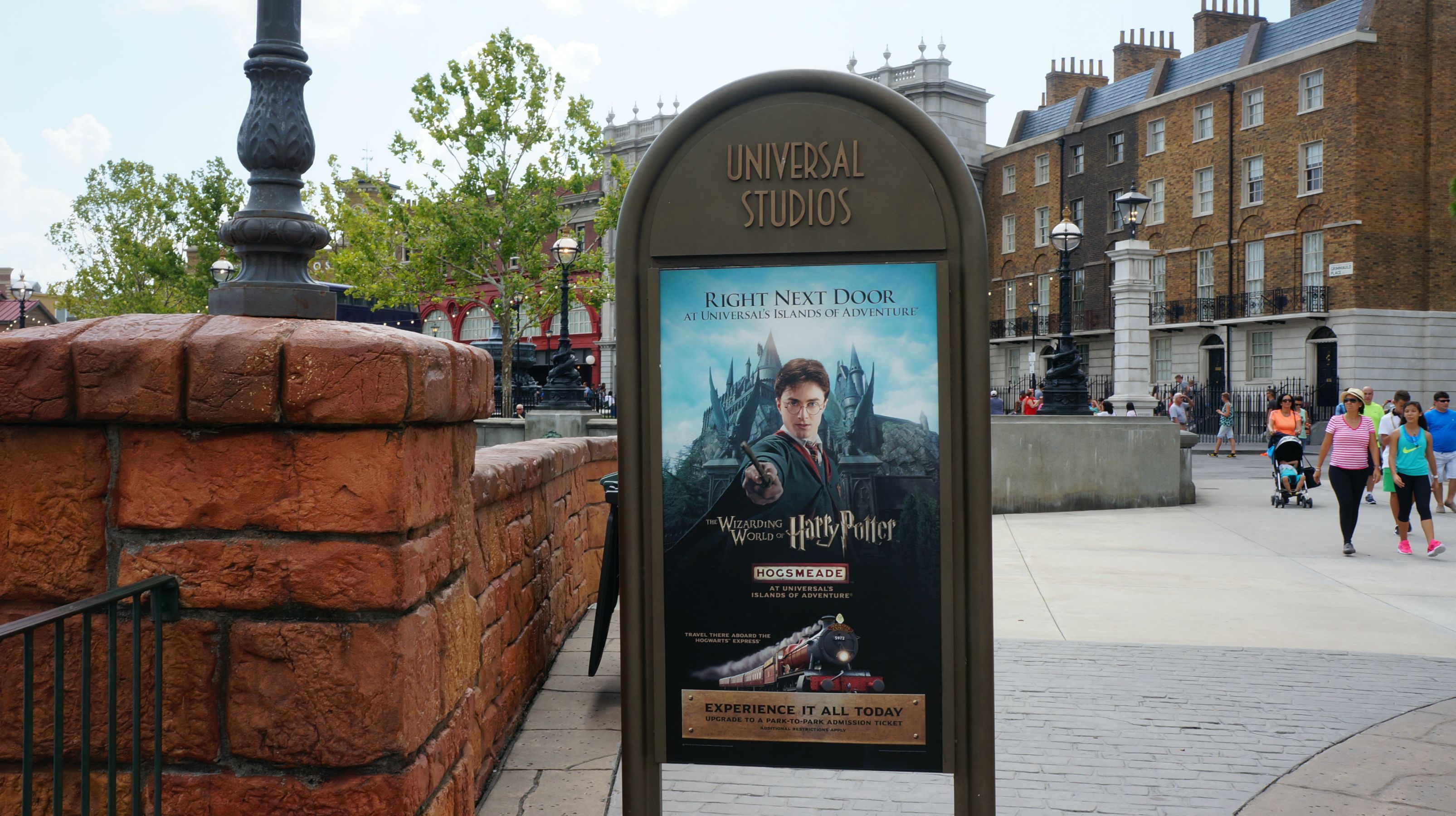 One of the most prominent ways this reality jolt takes place is due to the in-park advertising signage. Throughout the main walkways in both Islands of Adventure and Universal Studios you will come across signage that advertises a myriad of items, such as Express Pass, park-to-park tickets, or the Universal Dining Plan. While a lot of the text on these signs is well themed, the actual appearance of these signs are obvious advertisements and stand out, breaking the immersion and theme.

Walt Disney World on the other hand has very little in-park advertising. Moreover, the advertisements at the ticket windows at the entrance of each park are incredibly themed. These digital message boards were not introduced until an entire department studied the optimum messaging as well as details such as how long a particular image should stay on screen in order for it to appeal to guests.

The graphics and overall appearance of these digital boards are quite appealing, having been designed by some of Disney’s best graphic designers. If Universal insists on having numerous in-park advertisements it might be nice to consider a more artistic design approach so that the signs and placards feel less invasive. 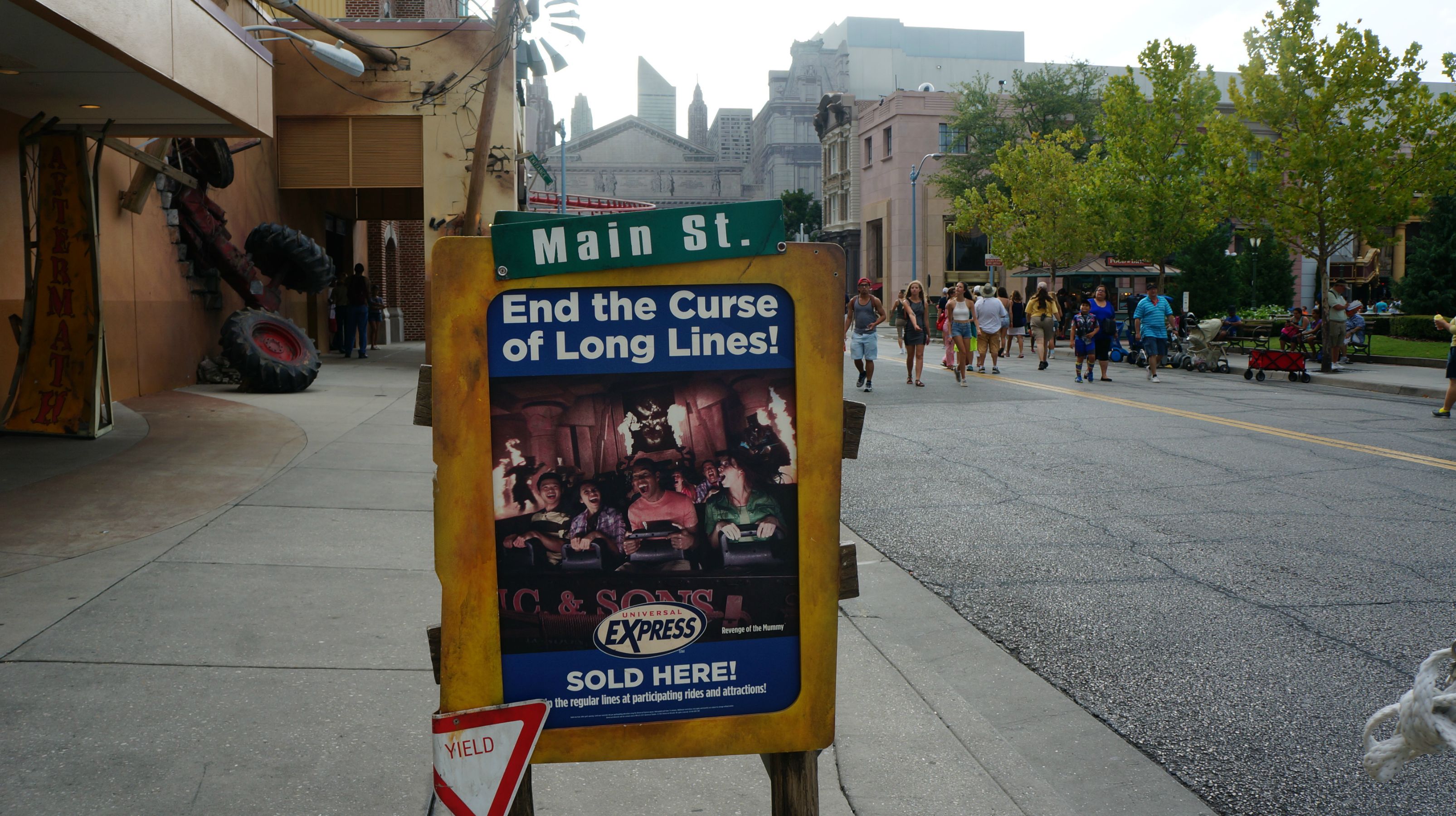 4 – Reserved seating for concerts
Universal Orlando is known around town for finding “free” money, or at least they used to be. There are multiple ways that Universal has found a way to monetize something that does not cost them much to produce, the most impactful being Express Pass. This is a product with practically no cost behind it, making it a very profitable offering. However, Walt Disney World is the king of hard ticket events and specialty seating packages, to the point it is almost comical.

Star Wars Weekends, the Osborne Family Spectacle of Dancing Lights, Fantasmic!, IllumiNations Dessert Party, are just a few examples of experiences that offer upgraded or reserved seating for an extra cost. While Universal does something similar for their Universal’s Cinematic Spectacular, they are missing an opportunity to make money by having reserved seating for their many concert series.

Between Mardi Gras, Manheim Steamroller during the holidays, and their Summer Concert Series, there is plenty of opportunity for Universal to sell a reserved viewing area. They don’t even have to follow Disney’s model of making it a dinner package. I know this idea may not be the most popular, but I personally would consider paying to have a reserved spot for a concert I really want to see instead of standing on the astroturf for two hours.

3 – Classics and nostalgia
To be clear, I am well aware that Universal Orlando’s claim to fame is not pixie dust and dreams come true. Universal is all about excitement. But there are some instances where it lacks a strong emotional appeal. One of the things that make Magic Kingdom and Disneyland the most attended theme parks on the planet is the nostalgia and emotional connections that span generations. 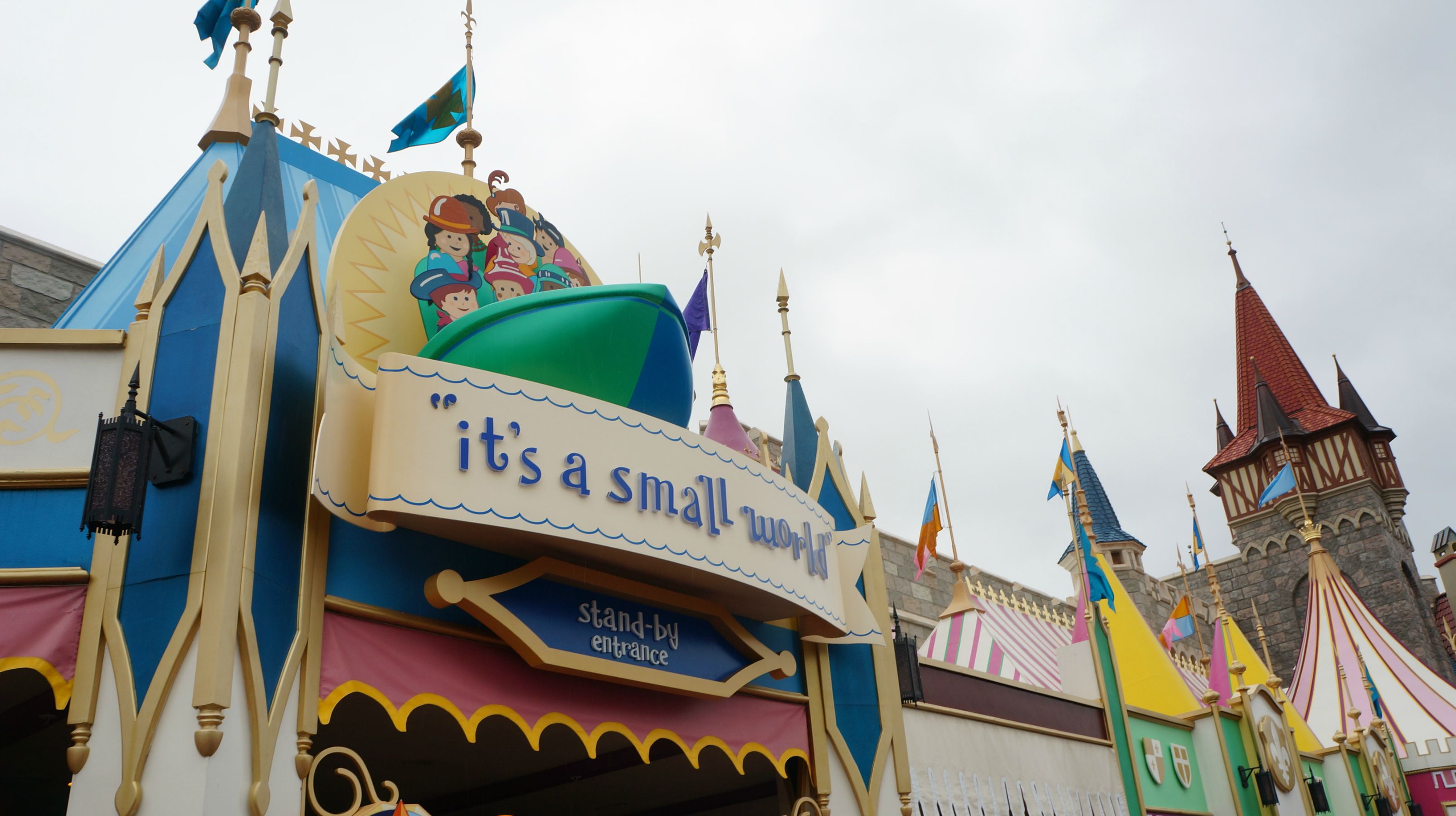 This year we celebrate the 25th anniversary of Universal Studios Florida, yet there is only one original attraction left operating today. I adore the ET Adventure. There are only two attractions left that offer me a connection with my visits to Universal Studios as a child growing up in Orlando: ET Adventure and Disaster. It is nice to visit these attractions and feel a tinge of nostalgia.

I am not saying Universal should not replace older attractions for newer and more relevant fare. What I am suggesting is that Universal remember to hang onto a few, meaningful experiences and update them as new technology and finances make sense to do so in order to keep a few emotional connections with guests who have been visiting since the early years.

2 – How to celebrate park anniversaries
Speaking of lack of emotional connections, does anyone feel an outpouring of love and jubilation over USF’s 25th anniversary this year? Show of hands? Not only is the lackluster celebration of their anniversary disappointing, it is also a lost revenue source. Walt Disney World, and especially Disneyland, have seemingly perfected the formula for making park anniversaries big and banking on it.

The special entertainment, enhancements, and decorations done at Disney Parks for their anniversaries are usually pretty fantastic. And when you add in specialty food & beverage and merchandise you’ve got a recipe for guests to really get in on the celebratory action, and lots of added revenue. It’d be nice to see Universal do more than nametag badges, lamp post banners on 1/3 of the park, some cool window displays, and a short concert series. I believe there is a strong enough Universal fan base to support better anniversary celebrations.

1 – Quick service dining
With the exception of Wizarding World of Harry Potter’s offerings and Springfield USA’s Fast Food Blvd, the quality of quick service dining inside both Universal’s theme parks is lacking when compared to Walt Disney World. Universal’s culinary team is capable of producing high quality, inventive food as evident by the options inside the Wizarding World of Harry Potter as well as the quality of food produced at private, catered events inside the parks. 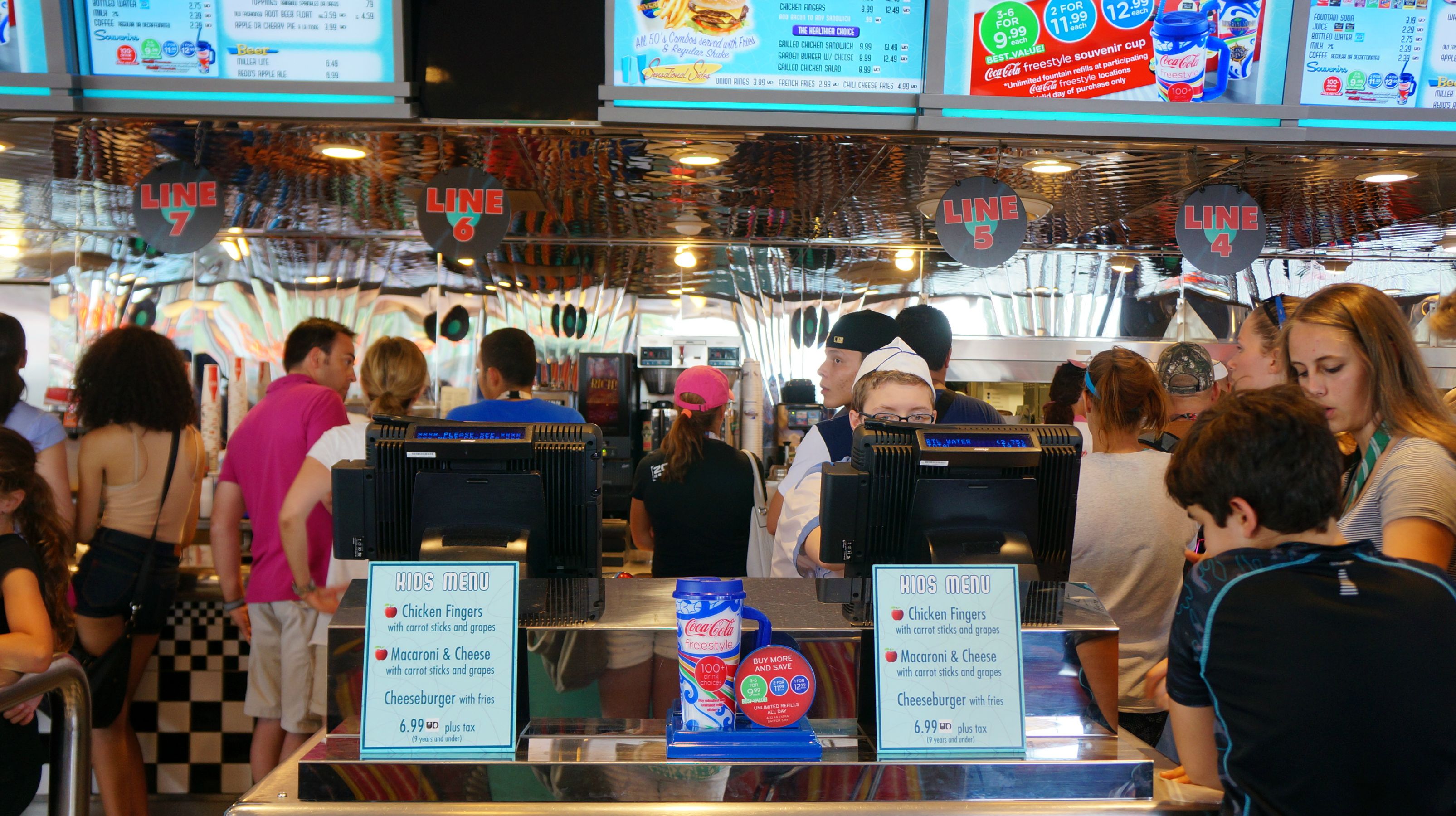 At Universal Studios you have Monsters Café (which has a pretty decent roasted chicken), Louie’s Pizza (which makes me wish it was Sbarro instead – which is not that great either), Mel’s Drive-In (which is certainly is iconic but the food is pretty underwhelming), and Kid Zone Pizza (which feels like it belongs in a smaller, regional park). Thankfully there is also Hogsmeade Village’s Three Broomsticks and Springfield USA’s Fast Food Blvd.

Still when you compare this line up to any quick service line up at any Walt Disney World theme park, it’s hard not to be disappointed. 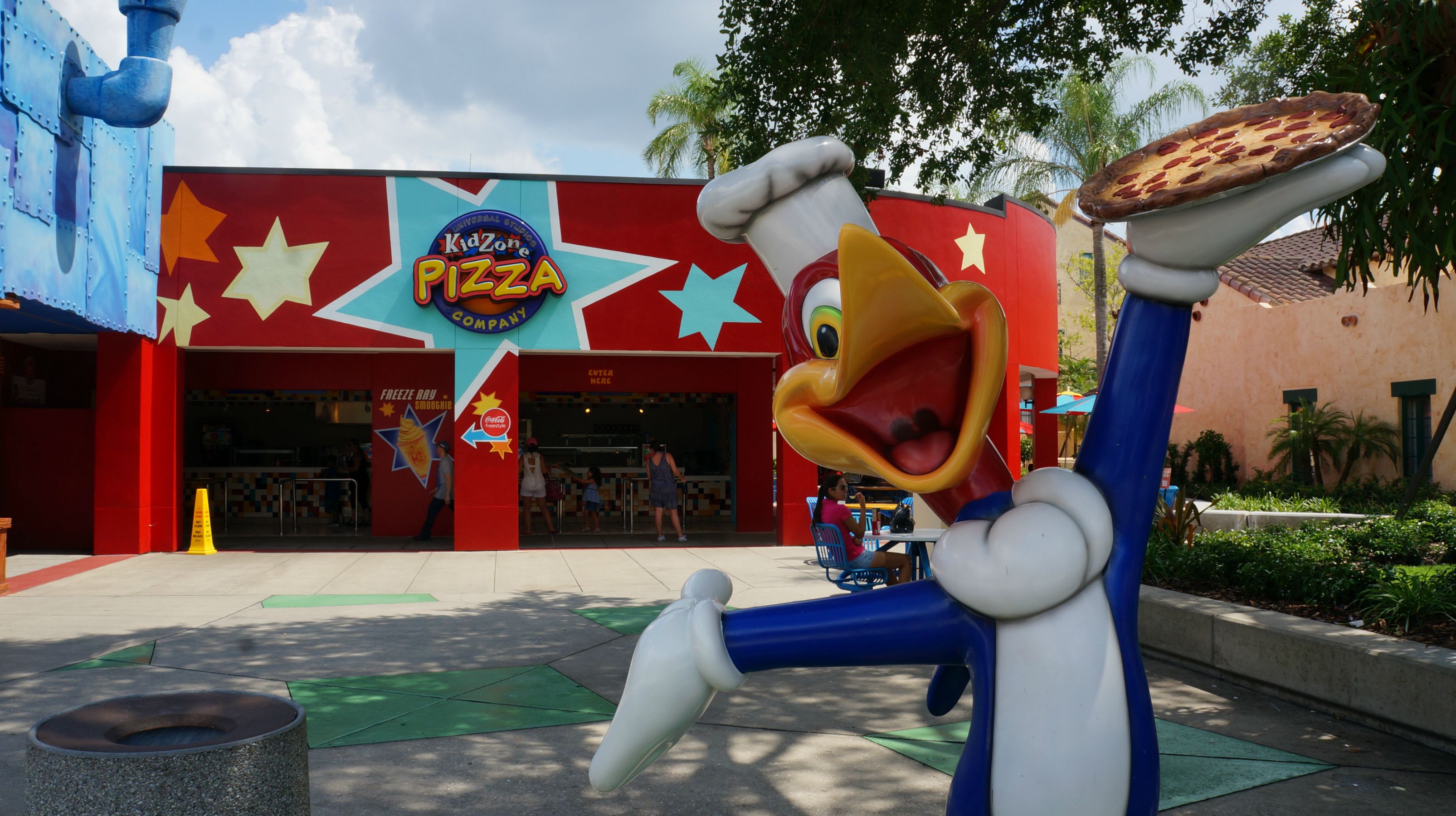 All in all, Universal Orlando is not meant to be the same experience as Walt Disney World. They are intentionally different. I love both destinations equally and for different reasons. While it is fun to compare and think about how each place could learn from the other, this healthy competition is most beneficial to us, the park guest. We get to reap the benefits of their one-upmanship and growth. In the end we can appreciate and enjoy each destination for their unique qualities.