It all started with Disney. Were it not for Disneyland, theme parks as we know them would not be. For so many fans and guests, the Disney Parks are the undisputed champions of theme parks. But, like all corporations and organizations there are some things that Disney could learn and improve upon. In fact they could learn a few things from the guys down the street: Universal Orlando.

As a fan of both destinations, I have the privilege of visiting both frequently. I also have worked for both companies, though much more time was spent at Walt Disney World. Let’s take a look at some of the things that Universal has mastered that Disney should consider putting into their acumen.

For being the organization that invented the use of the term “Cast Members” instead of staff or employees, the amount of themed interactions with front line Cast Members at Disney is surprisingly low. Other than a few exceptions, on my visits over the past few years, I have been disappointed in the amount of themed interactions I’ve had with Cast Members. Not everything a Cast Member says needs to fit the theme, but there are plenty of moments when a guest’s experience can be made better by doing so.

Walt Disney Imagineering spends so much time and resources creating a beautifully, immersive land, attraction, or venue just to have it ever so slightly diminished when Cast Members don’t get into character. For example, when an attraction is delayed or having difficulty, hearing “sorry guys, the ride is broken” just doesn’t cut it. Come on, there’s so much opportunity to have fun with this! You don’t even have to go over the top. Like at Kilimanjaro Safari: “We’re sorry folks, the wildebeest migration is moving through, we’ve had to pause our safaris momentarily” or at The Many Adventures of Winnie the Pooh: “Pooh bear got honey all over the place. It’s quite the sticky situation. We hope to open back up soon.”

Meanwhile at Universal Orlando, I often encounter some great themed interactions. This is not the case across all areas of both parks, but I feel I’ve experienced it more at Universal than at Disney in recent years. This is especially true at places like Men in Black: Alien Attack, both sections of the Wizarding World of Harry Potter, and Seuss Landing. It doesn’t take much to make the difference. And as someone who spent years on the front lines, I can assure you it certainly makes the job more fun. 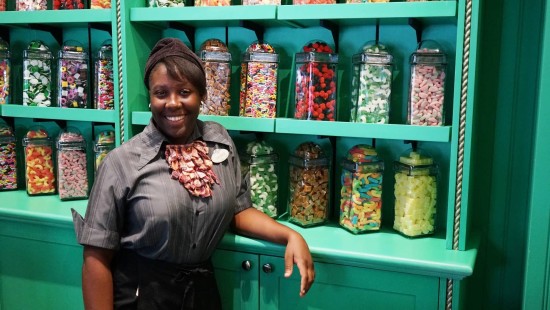 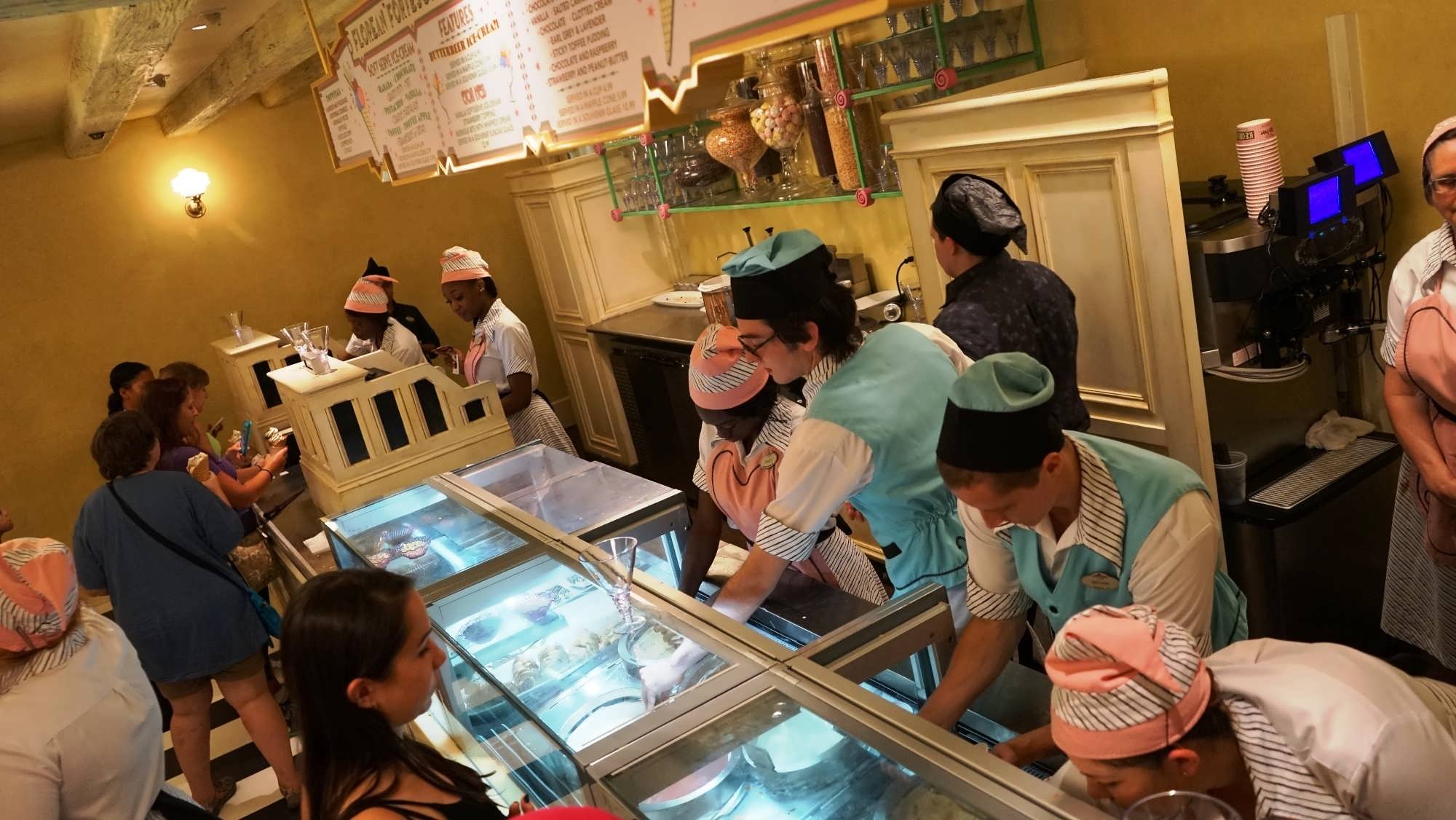 2. Dining without stress and super planning

Thanks to the Disney Dining Plan and the popularity of such premium experiences like Be Our Guest restaurant and Cinderella’s Royal Table, dining at Disney is stressful. If you want to dine at one of the most popular places you gotta book your spot 6 months in advance. If your plans change you have to make sure to cancel with 24 hour notice in order to not receive a $10 per person charge. If you’re on the Disney Dining Plan you’ve got to keep track of what food counts as what and what restaurants count double the credits, and chances are you’ll have way more food than you would normally order.

The most annoying aspect of Disney dining is for the table service restaurants, there is no such thing as walking up and getting in. Ok, that’s a little extreme, but it is very rare to be able to do so. While yes, we all know it takes planning to enjoy an Orlando vacation, there are still moments when you may want to do something spontaneous. It would be nice to have a few more occasions to enjoy a nice, full service meal when the moment strikes. 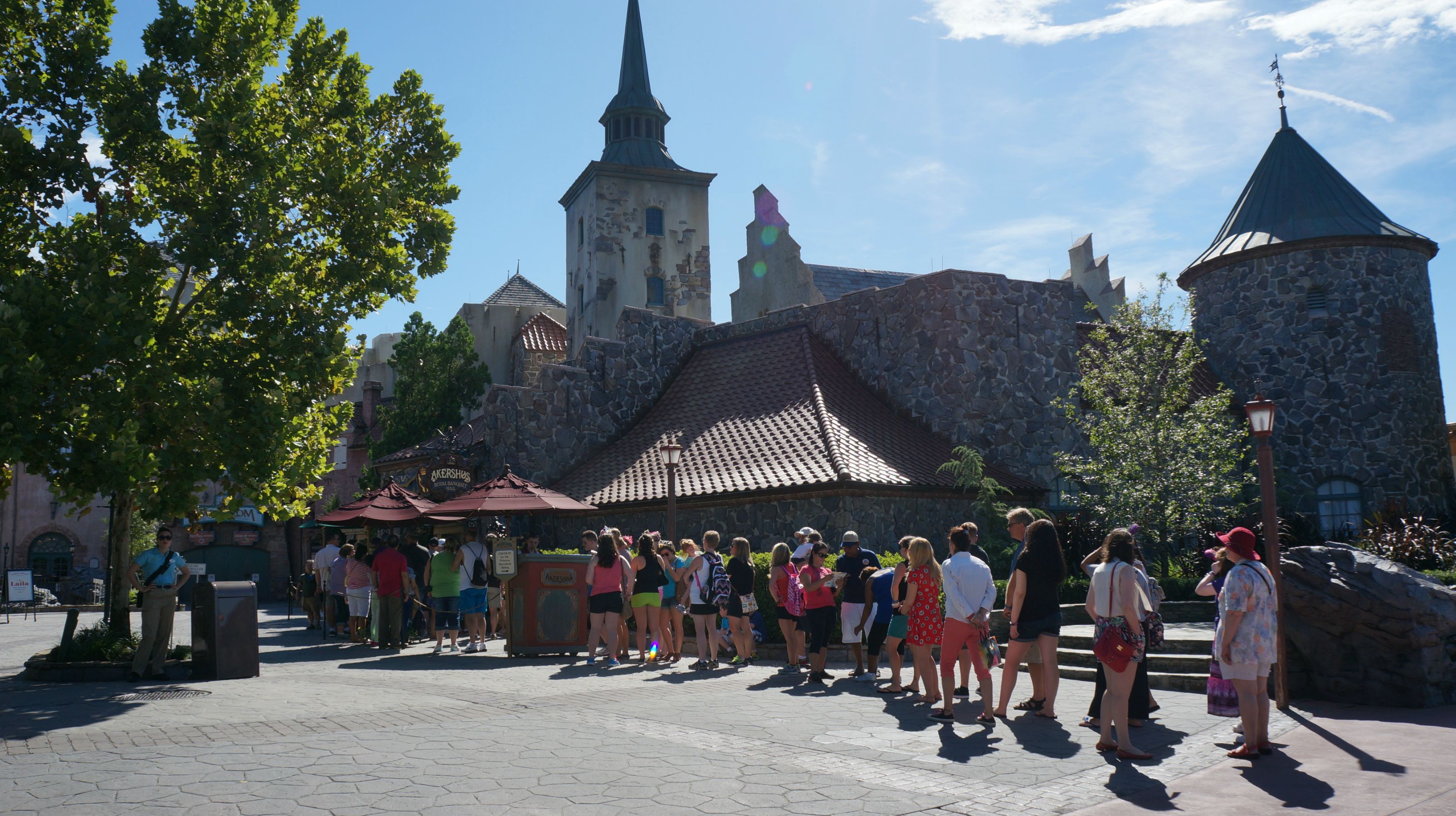 This is not to say that Walt Disney World is just for kids and families. Oh no sir, there are plenty of ways to enjoy Walt Disney World sans kids; I do it often. But in terms of events, venues, and experiences that really feel geared more to adults, Universal Orlando has it down to a science.
CityWalk (my favorite part of Universal Orlando Resort) itself is enough of an example. While I personally am disappointed that the number of nightclubs has been reduced, overall CityWalk has a variety of night time venues to satisfy all tastes. I have yet to have an evening there in which I have not felt perfectly able to kick back and be carefree adult.

Special events like Mardi Gras and Halloween Horror Nights also feel perfectly geared towards adults. Plus, at the on property resorts you can enjoy monthly special events that make for a night to remember. Jake’s American Bar at Loews Royal Pacific has a monthly beer pairing dinner that is a must-do. Though a little pricey, you won’t be disappointed. At Hard Rock Hotel, you can enjoy an intimate concert during their monthly Velvet Sessions. In the two theme parks, you’ll find lots of great bars and even a few offering happy hour!

Walt Disney World does have some night life venues like Atlantic Dance Hall (which can actually be pretty enjoyable, but only if you hit it on a rare night when it is busy) and Jellyrolls Dueling Pianos. And some of the lounges at the resorts make for a great night too, like Trader Sam’s Grog Grotto, or the River Roost lounge when Yehaa Bob is there performing. But with the loss of Pleasure Island, Universal still has the upper hand. Of course, we’ll see what happens once Disney Springs is finished, but I have a feeling Universal will still be the place to be if you want to be a carefree adult. 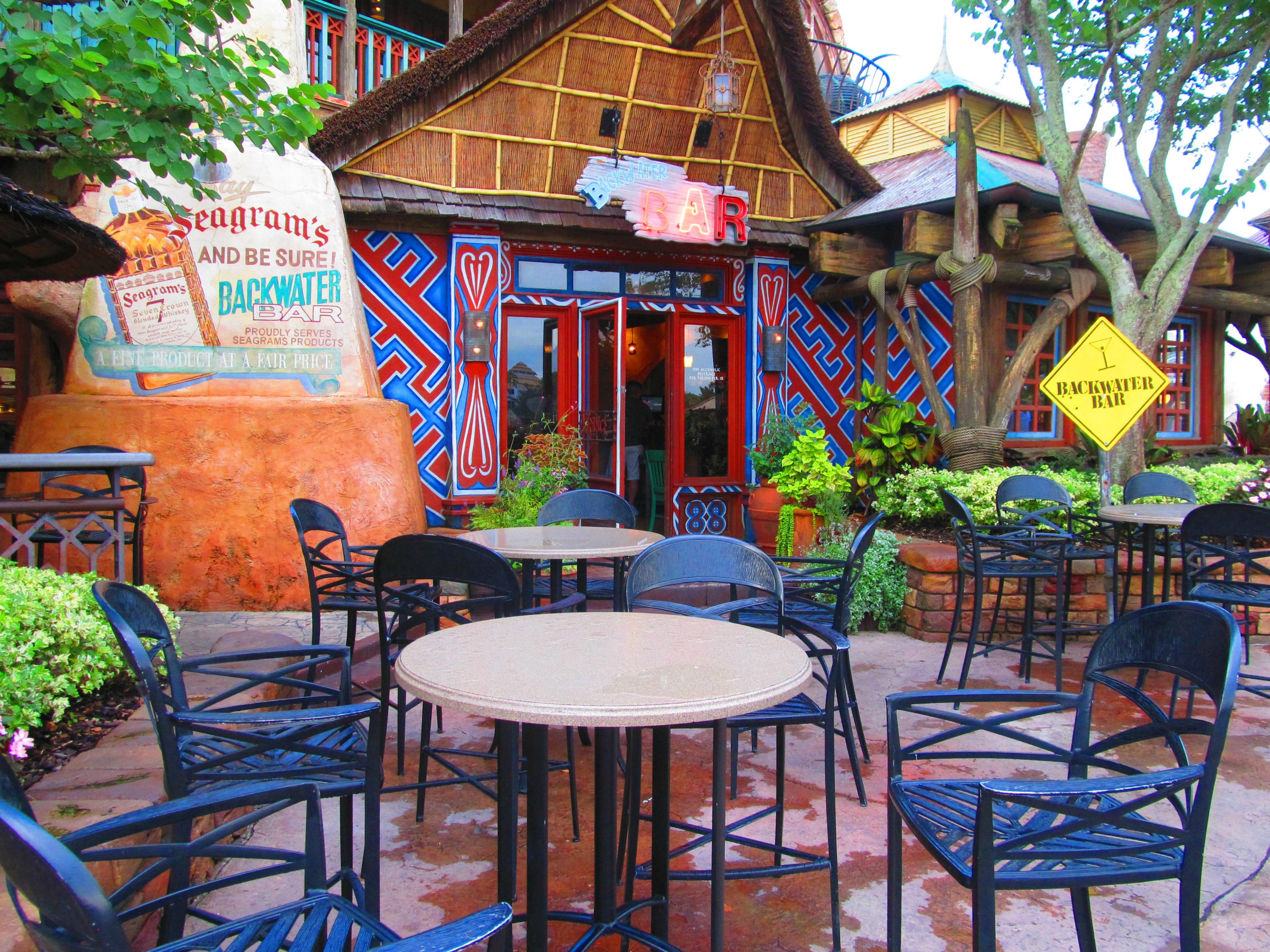 With the recent enhancements to CityWalk there are some good, relatively affordable quick service options. Meanwhile at Downtown Disney, soon to be Disney Springs, there just isn’t a whole lot of quick service dining options.

If you are a family on a tight budget strolling through Disney Springs, your options for something quick and less expensive than a sit down table service restaurant consist of Earl of Sandwich, Cookes of Dublin, and the Disney food trucks. Oh and maybe a sandwich from Starbucks. That’s it!

When the Wizarding World of Harry Potter – Hogsmeade Village opened, the merchandise at Universal Orlando was changed for the better. But then Diagon Alley came along and the themed merchandise game was taken to a whole new level, which continues today. While Disney does beat Universal in terms of overall merchandise variety, they are lagging behind in actual themed merchandise.

What I refer to is merchandise that looks and feels like it actually exists in the realm it represents. For example, Universal has interactive wands, specialty candy, plush animals, and even specialty trinkets like a glass jar from the Magical Menagerie or Quidditch supplies, all of which feel like items that would be found in the actual Diagon Alley.

While there isn’t a land inside any Walt Disney World park that perfectly recreates a land from a movie on the level of Wizarding World of Harry Potter, many of us wait impatiently for the creation of Star Wars land. When the time comes for such a creation I hope Disney takes a look at the amazing merchandise (and food & beverage) that is so perfectly themed at Wizarding World of Harry Potter, and even Springfield USA. 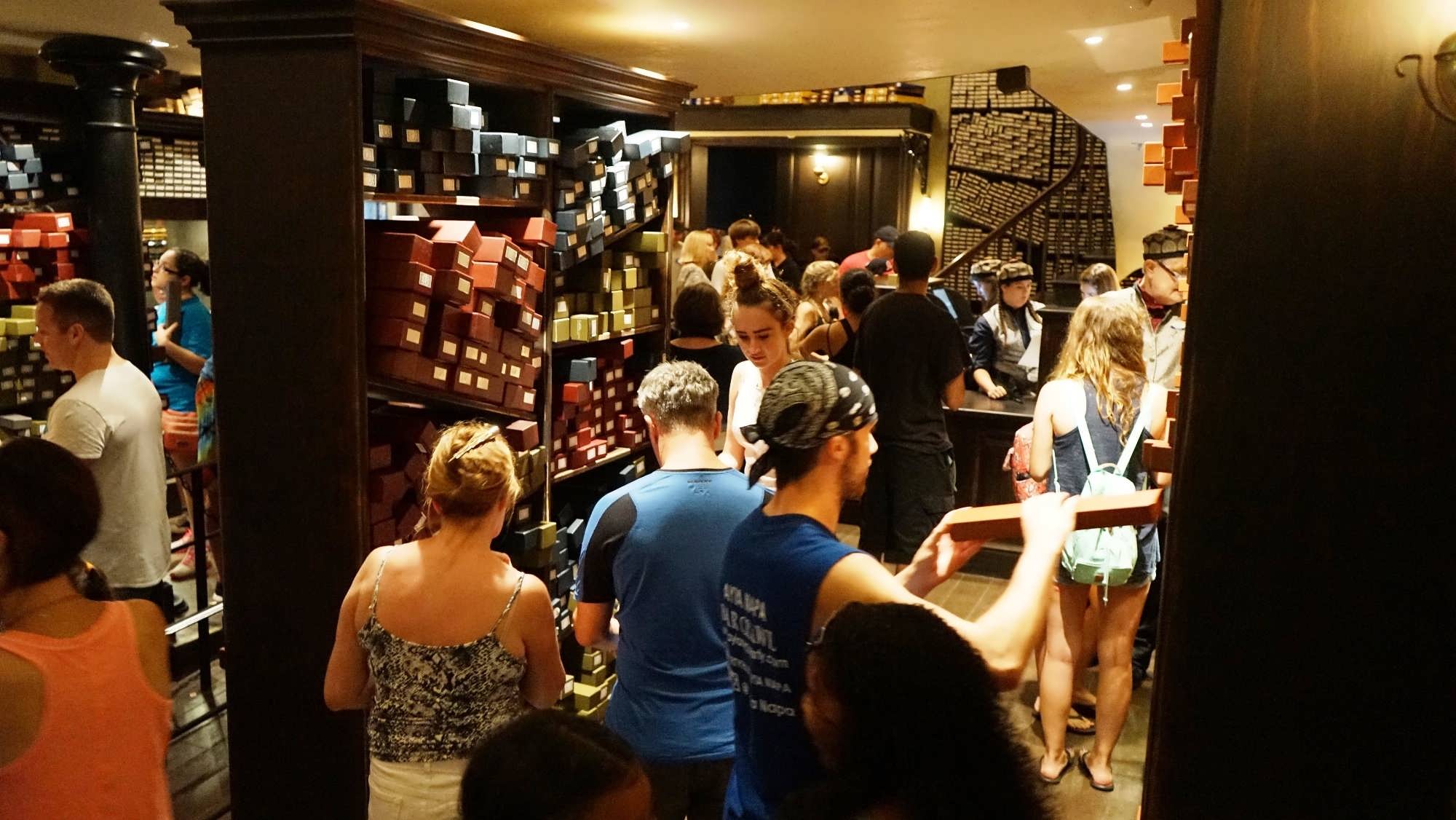 The great thing about competition in all business sectors is these competing businesses usually push one another to innovate and improve in order to attract consumers. As theme parks fans and guests, we get to reap the benefits of this competition. While there are some things that Walt Disney World can learn from Universal Orlando, the same thing can be said for the reverse.