Unless you’ve been stuck in line at Harry Potter and the Escape from Gringotts for the past year, you’ve heard all about this little water park that Universal is currently building from the ground up called Volcano Bay. Although only roughly half the size of Disney’s Typhoon Lagoon or Blizzard Beach, it’s already promising to be a game-changer, including – potentially – a queue-less waiting system, a 200-foot volcano that regularly erupts, and a night-time show, which implies a truly revolutionary touch: a full-day experience. (For all this and more, be sure to check out our in-depth article examining the park’s rumored attributes.)

While that’s all well and good, there’s a small, quiet, resolute reality deep within me that remains unchanged: I want more. For my money (and, really, Universal will be getting quite a bit of it if it keeps up its current pace of construction and envelope-pushing), Volcano Bay doesn’t just need to be the best water park in the world – it needs to be the Wizarding World of Harry Potter – Diagon Alley version of all water parks. It needs to paint on a canvas that has hitherto not been conceived of, let alone executed. It needs not only to expand the scope of the game, but to fundamentally redefine how it’s played. 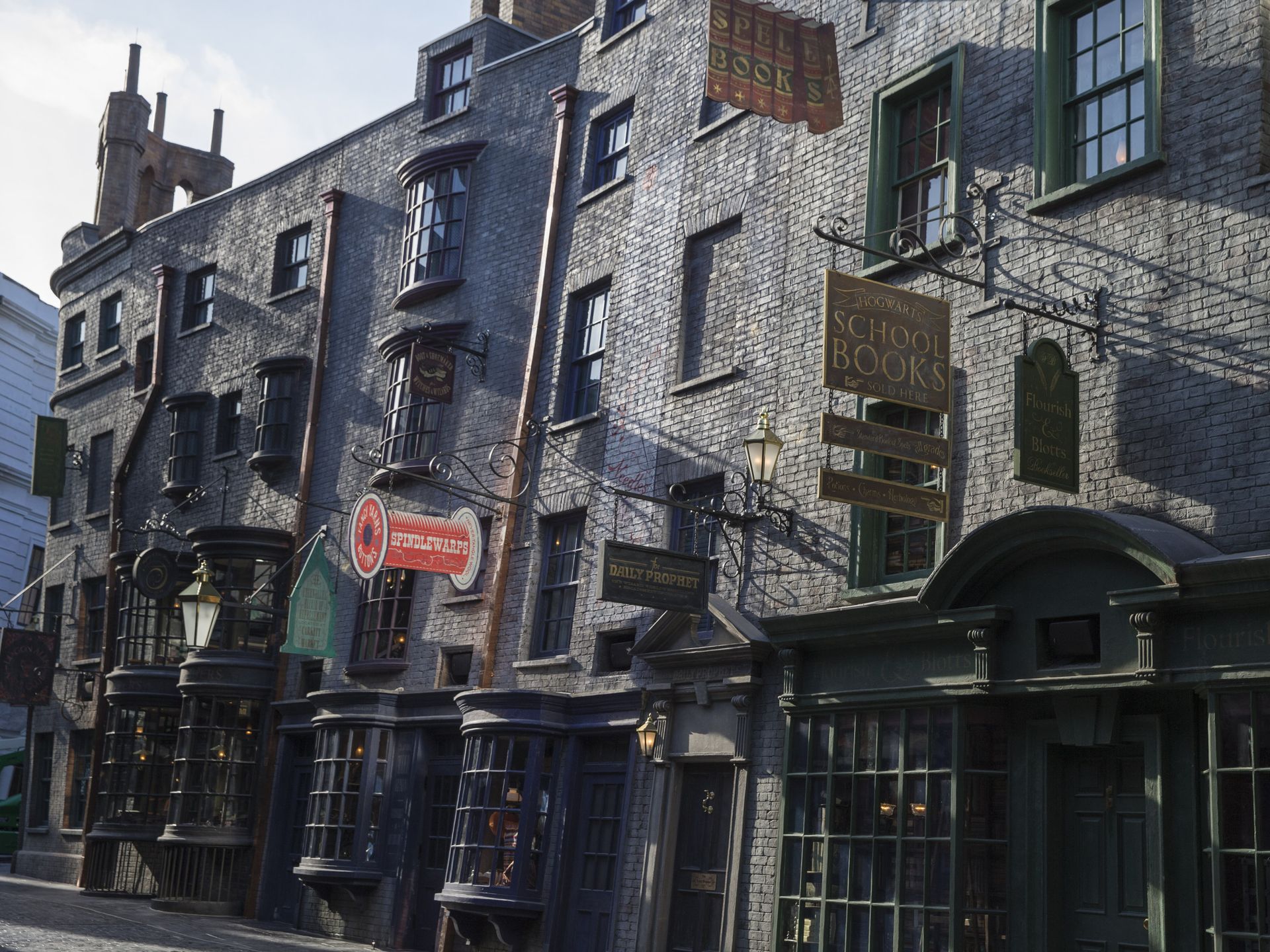 Imagine this level of detail surrounding you in a water park…

Here, then, are the top three elements I want to see Universal pull off when Volcano Bay opens in the summer of 2017 (or, just possibly, in the fall of ’16).

#1 – High-intensity water slides
There are two ways for Universal to tackle the particular challenge of creating the next generation of water slides. The first is for the company to take the same exact mentality it approaches its traditional dark rides with – that is to say, taking leisurely-paced treks through animatronic-infested buildings and injecting a large dose of thrill elements, such as Revenge of the Mummy’s twists and turns [and burning ceilings!] or Cat in the Hat’s erstwhile spinning, into the mix – and apply it to the world of water attractions.

Imagining what a thrill ride-equivalent of a water slide will be like, generally, can send chills down your spine all its own, but attempting to picture what an aquatic version of, say, The Adventures of Spider-Man or, even better, Harry Potter and the Forbidden Journey would entail, specifically, can easily blow your mind.

Just what might these suped-up behemoths look like? Fortunately for us, we have several real-world examples to pull from, ranging from the four-person inner-tube ride Tantrum Alley (which features two downhill and three water-tornado sections) at Wild Wadi Waterpark in Dubai to, of course, the impending king of all water slides, Verruckt, which is a staggering 17-stories-tall (that’s taller than either the Statue of Liberty or Niagara Falls), at Schlitterbahn Kansas City.

#2 – Dark (water) rides
But as exhilarating as these monster water slides may be, they’re still, at the end of the day, just that – water slides. What Universal has the opportunity to do here is incorporate its newly-discovered world-class theming sensibilities in entirely new – or, at the very least, unprecedented – ways. Boarding water rides that actually tell a story, and that use animatronics and, just possibly, giant 3D screens to do it, may be a rarity at the moment, but it’s undoubtedly the way of the future – just as hitting up fully-themed gift shops for hours on end has become the de facto standard after the Wizarding Worlds were unleashed earlier this decade.

Various amusement and theme park operators the world over have already tentatively started to dip their toes (no pun intended) into this pool. SeaWorld Orlando is home to Journey to Atlantis, which is, for all intents and purposes, the sister attraction to Islands of Adventure’s Jurassic Park: River Adventure – a flume ride with an elaborate (well, comparatively, at least) dark-ride intro section. And Germany’s Europa Park has what it calls a “water roller coaster,” Poseidon, which essentially acts as a traditional coaster with a few splash-downs and themed interstitial areas thrown in.

Imagine either one of these with Forbidden Journey’s incredible sets or the upcoming Skull Island’s massive King Kong audio-animatronic figure, and you’re well on your way to what Universal can easily accomplish.

All of which doesn’t mention a whole other possibility open to the company: trackless ride systems, which Disney has pioneered in its non-American parks (go figure) and which can easily be adapted to the realm of water, as Tokyo DisneySea’s Aquatopia amply demonstrates. Here, guests pile into “hovercrafts” that meander their way throughout a roped-off water-filled area; the lack of pre-established routes, the vehicles’ ability to spin about in place, and the added bonus of choosing a version of the ride that gets you soaked all add up to the possibility of a new type of experience that is, even better, completely unavailable anywhere else on property (or in the city of Orlando, for that matter).

What more could you possibly ask for? (Besides offering a better ride experience than Aquatopia, of course.)

#3 – A theme park experience
Whispers around and leaks emanating from Volcano Bay’s design team have consistently pointed to the fact that the future water park will be the first in the world to be divvied up into different, separately-themed sections, much like the basic theme park model that Walt himself created in the 1950s.

The effect such a move would have on the guest experience cannot be overstated. Despite being only some 60 or 70 acres in size, the park would immediately feel much bigger and much more expansive than it otherwise would. The different overarching thematic motifs of the different lands would potentially provide for more variation from attraction to attraction, whether they be crazy new water slides or stage show performances. And then, of course, come all the attendant elements that theme parks now take for granted, such as the ability to have character meet-‘n-greets, to line the streets with restaurants such as Mythos or stores like Diagon Alley’s, and to hide many Easter eggs or other thematic flourishes into every nook and cranny.

But the biggest personal wish I hold here is one that, funnily enough, runs counter to the growing demands of themed enthusiasts, particularly when it comes to such phenomenally popular events as Halloween Horror Nights: I want pre-existent intellectual properties.

Not all the lands, mind you, and not the immediately obvious licenses, like, say, Jaws (though that does have quite the potential for some amusing gags and rides, it has to be said). But embarking on, say, a water-propelled quest to evacuate a city from the onslaught of Pacific Rim’s kaiju can be both engrossing and potentially drenching, and I’ve always thought that the twisty-turvy circuits of time from the Bill and Ted movies demanded a water slide (or a traditional coaster – whichever would come first).

There’s always the possibility of Universal getting extra play out of its own licenses, as well, such as Waterworld, which has been a venerable hallmark of Universal Studios Hollywood for decades but has never once seen the light of day in Florida. And don’t even get me (or, presumably, Universal’s accountants) started on what an aquatic version of the Wizarding World of Harry Potter would be like.

The potential for creativity and name recognition both is certainly there – and such a move would instantly showcase Universal’s intent on making Volcano Bay a revolutionary experience.

Have other suggestions or your own must-haves? I’m eager to see ’em in the comments below.

Explore Port of Entry’s many secrets

wpDiscuz
0
0
Would love your thoughts, please comment.x
()
x
| Reply
We utilize cookies to ensure that we provide you the best experience on our website. By continuing, you acknowledge our cookie policy.Ok