If you’ve never visited a theme park after dark, then you are truly missing out on an entirely different experience than you receive in the daytime hours.  The disparity is so drastic that the simple overlay of nighttime can make it seem like you are in an entirely new park altogether.  At the very least, you may see things like you never have before.

The old storytelling trope that things come to life at night was never more apropos than in the theme park world.  Nothing can breathe new life into a visit to a theme park you’ve visited a hundred times before like an evening stroll through familiar old walkways that suddenly become unfamiliar and therefore more exciting.

What exactly changes as the sun sets?  Only everything…

Whether it’s a land or an island, each themed section of a park becomes more mysterious and amazing at night.  One of the most important agents of this metamorphosis is the lighting, and not just the lack of the big ball of light high in the sky.

You are now in the creative and capable hands of lighting engineers, whose empty canvass is the world of darkness and shadows.  By painting with light sources, they create ambience and atmosphere unique to the evening hours.

For example, a visit to either area of the Wizarding World of Harry Potter is always a magical experience in and of itself, but it just feels more mysterious and magical after sundown.  Diagon Alley in particular benefits from a night visit and the lighting, or lack thereof, makes all the difference.

A warm and comforting glow emanates invitingly from each shop and restaurant in the Alley.  Fiery blasts of dragon breath illuminate the night sky with a rush of heat and powerful flash.  The “Lumos!” Interactive Wand experiences light up even brighter. 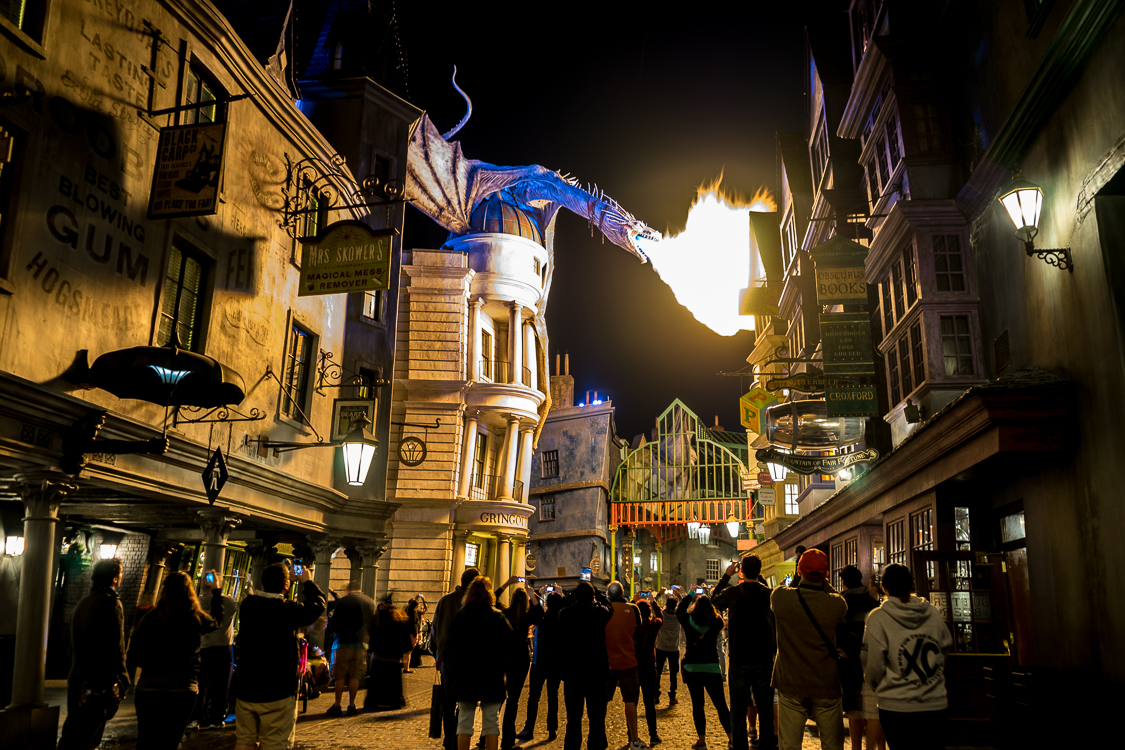 A lack of light can also create its own ambience.  Your little ones may cling to your hand a little tighter on a visit through the twisted corridors of Knockturn Alley.  The surrounding darkness only increases the sense of dread and foreboding nestled within its walls, making you hope you don’t run into a Death Eater…

Another example of nighttime increasing the immersiveness of a theme park land is the towering entrances to Jurassic Park in Islands of Adventure.  Seeing those torches flaring brightly as they welcome you to Jurassic Park makes you feel like you’re stepping right into the films… and that a Velociraptor could be lurking in the shadows of the surrounding vegetation.

As an added bonus, with the sun down the Florida nights are significantly cooler.  Walking around in a more pleasant environment affords you an opportunity to take your time and really explore the nooks and crannies of a park.  Linger in the lands and enjoy the beautiful details of art and design that went into creating the overall aesthetic.

Lands aren’t the only beneficiary of a literal night-and-day difference.  Riding an outdoor attraction in the evening hours can offer such a dissimilar experience that it may seem like a whole new ride entirely.

Roller coasters are obviously some of the biggest beneficiaries of this differential.  Launching out of the darkened tube on the Incredible Hulk Roller Coaster into bright daylight can be a bit disorienting, but doing so when the outside is just as dark is exhilarating in a unique way.

The same goes for the Dragon Challenge and the Flight of the Hippogriff, which not only gives you a new version of the same ride at night, but a wonderful bird’s eye view of a fully illuminated Hogwarts Castle and the surrounding land of Hogsmeade. 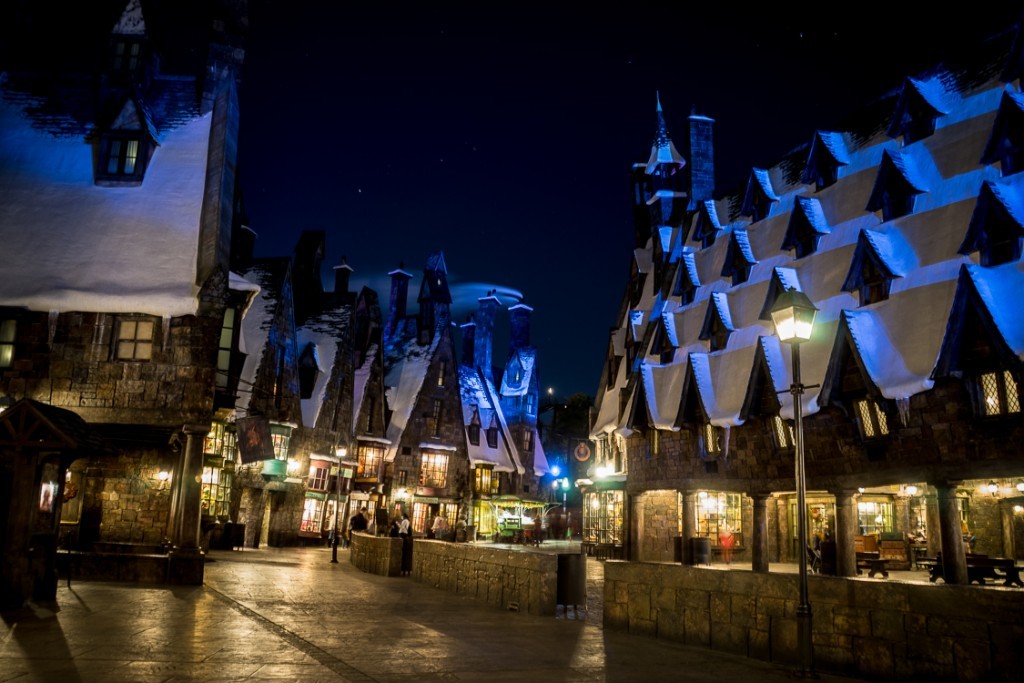 Hogsmeade at night inside Islands of Adventure.

Besides the rides, you can see a whole new side of your favorite restaurants with outdoor seating.  Whether in the parks or at CityWalk, the cooler evening temperatures allow for al fresco dining so you can people-watch the more colorful characters that emerge at night (especially as it grows later and later in CityWalk!)

Another bonus is the increased level of romance inherent in dining outside under the stars amid the neon of nearby attractions and restaurants.  Some great places to enjoy this atmosphere while dining include Lombard’s Landing (where you can also enjoy the Universal Cinematic Spectacular) in Universal Studios, Margaritaville’s Porch of Indecision in CityWalk, BiCE at Portofino Bay Resort, Mythos at Islands of Adventure, and the The Cowfish Sushi Burger Bar at CityWalk. 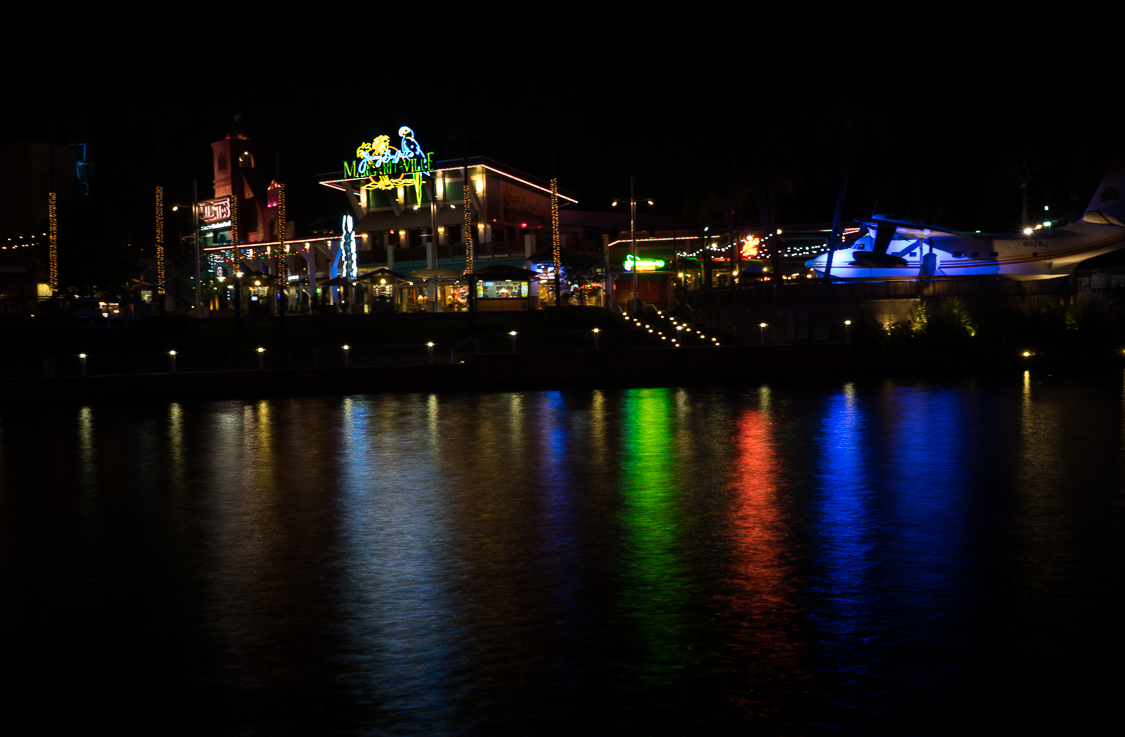 And I also highly recommend playing a late night round of miniature golf at Hollywood Drive-in Golf in CityWalk, which only adds to the creepy cool vibe of the already remarkable courses: “The Haunting of Ghostly Greens” and “Invaders from Planet Putt.”  The LED neon edge-lighting and special effects really pop spectacular fashion when it’s dark out. 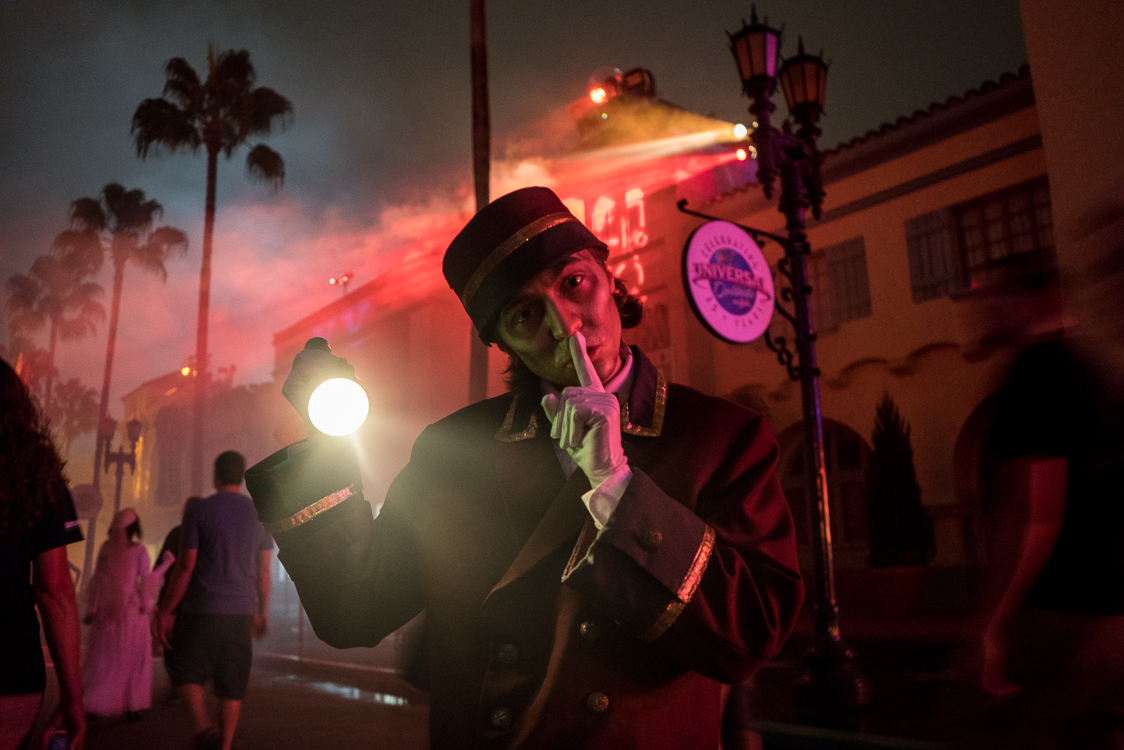 Night is also the only time you can enjoy some of the amazing special events offered at Universal Orlando Resort.

First and foremost is Halloween Horror Nights.  Why?   Well because Halloween Horror Days just doesn’t have the same ring to it.  Plus it wouldn’t be half as scary.  All the things mentioned above in regard to lighting and shadows come into full play here.

The lands grow thick with the type of atmosphere you can only find during the hours of darkness as the technical wizards of Universal Orlando Resort have you at their mercy.  Everything about the nighttime serves the inherent fear of this special event, particularly with regard to the outdoor scare zones. 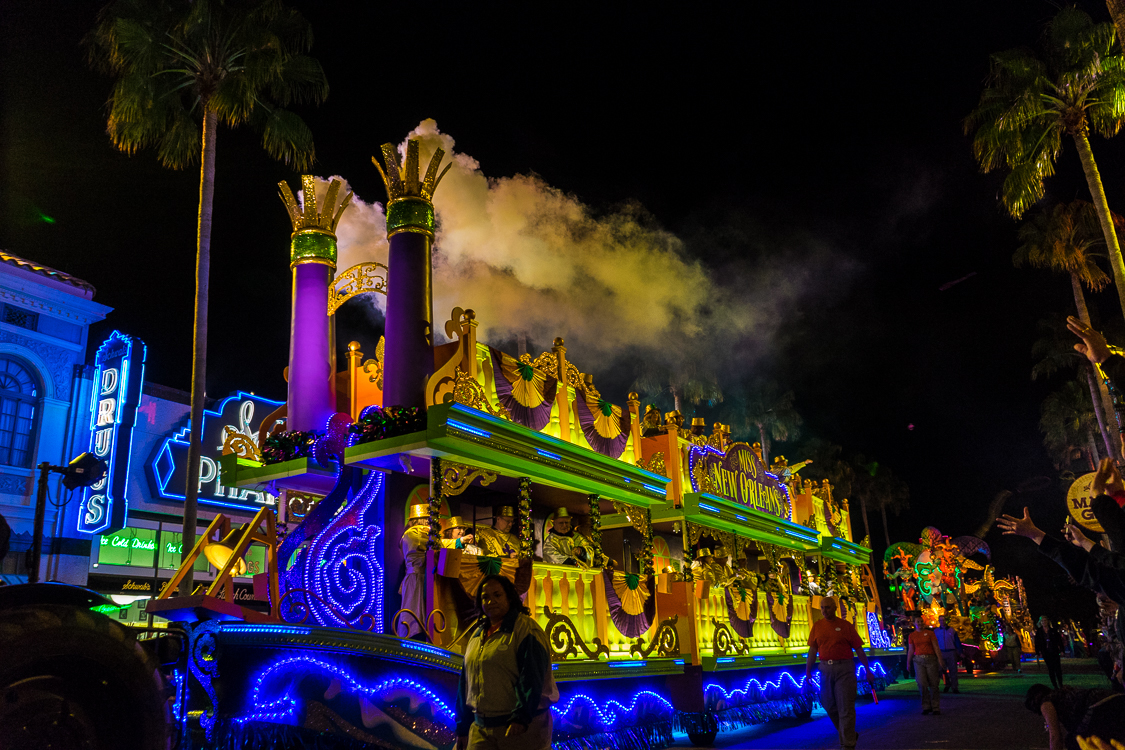 The riverboat Mardi Gras float makes its way down the streets of Universal Studios Florida.

As much as the evening hours can certainly add to the thrills and chills of a scary event like HHN, the darkness can also create a wild and wonderful party atmosphere, filled with fun and celebration during the huge party known as Mardi Gras.

The bright lights of the Big Easy add to the excitement of the flying beads, stunningly decorated floats, and colorful costumed street performers of the Mardi Gras parade, while the live concerts illuminate the stage.

To enjoy everything Universal Orlando Resort has to offer night or day, don’t forget to utilize the experts at Orlando Informer Travel.

Paul Danner believes Florida consists mostly of Orlando, and then some other places with oranges and beaches. He is a proud member of Gryffindor House, idolizes Donald Duck (but unlike Donald, wears pants… uh, most of the time), and occasionally writes things that some people find funny. He has visited theme parks well into the hundreds of times in his life so he knows more about them than other things, like politics and math.