It’s corny, ridiculous, and one of the silliest, hilarious things to ever grace modern television. The Sharknado series has put the SyFy network on the radar screens of many viewers who might not otherwise give the network any notice. The latest installment, Sharknado 3: Oh Hell No! takes place primarily in Central Florida, with Universal Orlando playing a major starring role. There’s lots of tasty morsels in this crazy made-for-TV movie for Universal Orlando fans. While the premier of the movie has already taken place, you can bet SyFy will replay it over and over,…. with the next showing on Saturday, July 25th at 7pm Eastern. So in case you missed it and want to know if it’s worth your time (it is) or if you were glued to the TV during the premier, let’s take a look at why every Universal Orlando fans needs to watch Sharknado 3.

SPOILER ALERT! Yes, this list will contain many spoilers, but really this is Sharknado we’re talking about, not some in-depth philosophical movie with deep plot lines.

3. Cabana Bay gets some major screen time
To the surprise and delight of many Universal fans, Loew’s Royal Pacific Resort makes an important cameo as the destination of the movie’s final scene (though it is not acknowledged as such and is simply used as a tropical beach). However, the resort that gets to have a starring role is Universal’s Cabana Bay Beach Resort.

Finale at the ROYAL PACIFIC RESORT beach. Captain Jake's plane in shot. I HAVE ASCENDED DIRECTLY TO HEAVEN. pic.twitter.com/hyScegtVta

Cabana Bay Resort is a great resort to be featured because of its beach theme and nostalgic vibe. The Swizzle Lounge gets some respectable air time, and while watching Sharknado 3 I could definitely go for a strong drink. But the best part about Cabana Bay’s scene is the shark cruising down the water slide before attacking NSYNC’s Chris Kirkpatrick playing the role of a lifeguard. Two fins up for the best use of resort pool slide in a movie! I do have to say though, it would’ve been even more awesome to also see sharks in Cabana Bay’s lazy river, am I right?

2. The attractions get shark-ified
I cannot personally recall ever seeing Universal Orlando’s attractions being used and shown in such a way. WOW! So many ridiculous moments! I am sure many of us knew from all the posts prior to the movie premiere that Hollywood Rip, Ride, Rockit roller coaster would play a major role. However, I was not prepared to see a shark actually ride the tracks! What’s more is Fin, the main character gets trapped on the ride vehicle resulting in him not only riding a portion of the coaster, with a shark attacking him, but then he is launched into Twister: Ride it Out! Are you kidding?!!

The Twister scene is short, but satisfying. There’s just no way they could have Sharknado 3 take place inside Universal Orlando and not have some sort of action take place inside Twister: Ride it Out. Sure, the attractions days are numbered, but it’s hard to think of a better sendoff that to have a shark vs. man scene and a cheering audience full of Orlando locals as extras.

That moment you have a captive audience and you're not even acting.👏👏👏 #Classic #Sharknado3 cc: @IanZiering pic.twitter.com/GbkodszgxI

As if these two over-the-top scenes weren’t enough, prior to all this action we get to see sharks invade Distaster! using one of the show scene’s most loved effects: water flooding the station. As the water rushes into the show scene, ferocious sharks ride the waves ready to chomp on the poor, innocent park guests. But this is not the scariest part, oh no, there is a much more dreaded foe for theme park fans: the selfie stick. Perhaps Universal is making an argument for why they still allow selfie sticks in their parks, even selling them in multiple locations, but the use of a selfie stick to kill a shark is a small but mighty scene.

Many viewers noticed that the only attractions used were ones that do not involve a well known movie or character franchise. Can you imagine pitching J.K. Rowling that sharks will be falling from the sky and attacking parks guests in the middle of Hogsmeade, or an epic battle of the Diagon Alley dragon vs. the sharks? It’d be awesome for sure, but we know all too well the parent companies of the different franchises probably wouldn’t take too kindly to such craziness, and the royalties would be astronomical. I also have to mention, I am so glad that Bruce the shark, the popular photo spot, was given some decent, and funny screen time too.

1. The Universal Globe like you’ve never seen it before
If there is one thing that Sharknado 3 proves it’s that Universal Orlando (and NASA) have a great sense of humor. Once again, many of us knew the iconic Universal globe would somehow be featured, and yet nothing prepared us for exactly how. 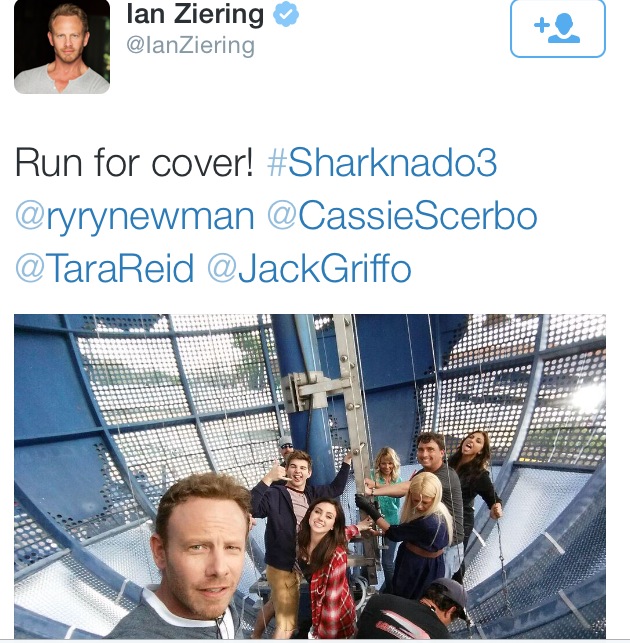 As chaos reigns (and rains) over Universal Orlando, the main characters take “shelter” inside the Universal globe, but alas the massive Sharknado closes in on the landmark, ripping it from its base. Suddenly we have an Indiana Jones moment as the massive globe rolls violently through CityWalk. Terrorized tourists run frantically through CityWalk, a la Jurassic World. This scene is pretty satisfying for Universal fans, but then the cherry on top (literally) is now a visual moment that we fans shall feast on for a long time…
The Universal globe is swept into the air and lands perfectly perched atop the Islands of Adventure lighthouse! Two Universal Orlando icons become one. It’s just….. it’s just fantastic!

While watching live, people took to twitter (myself included) posting pictures of their TV screens showing this unexpected, but oh so great moment, perhaps the best moment of the movie (for us Universal fans at least). 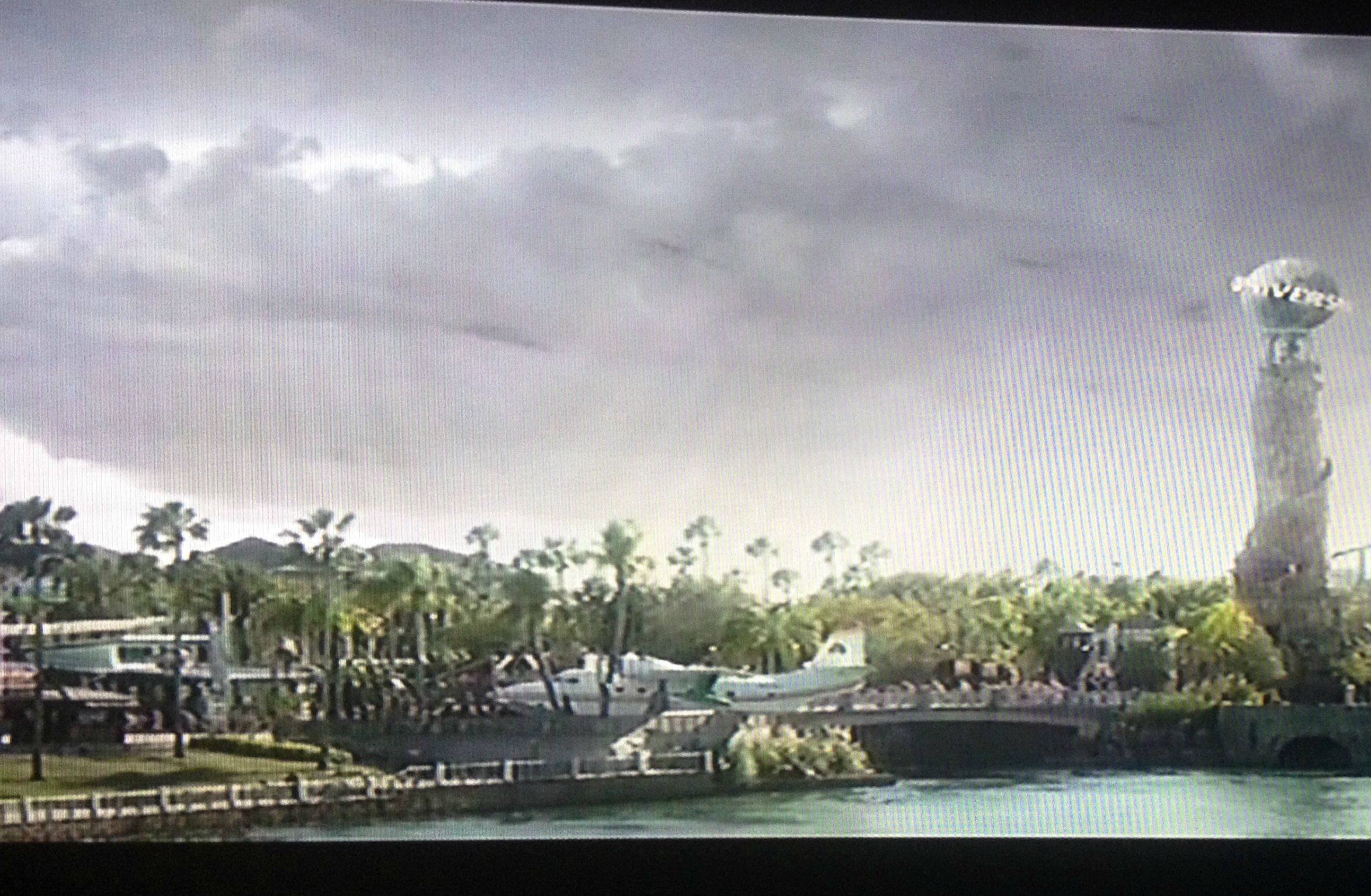 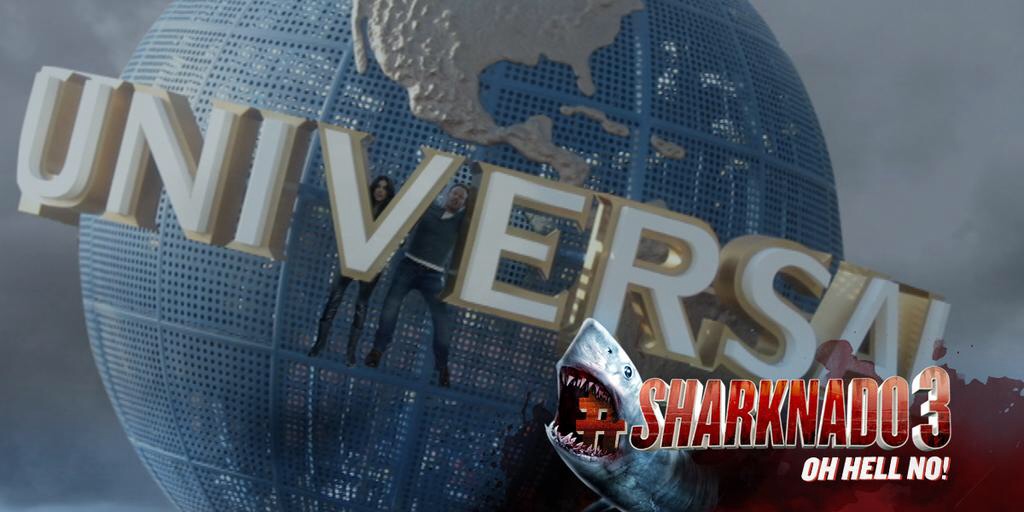 Bonus round: Clever use of Universal’s New York backlot area and Production Central
Initially, and for the first few years, lots of TV shows and movies were produced entirely or in part at Universal Studios Florida. The amount of production has been greatly reduced over the years, but recently we’ve seen a lot more production taking place at USF, including Extra with Mario Lopez, The Tonight Show with Jimmy Fallon, American Ninja Warrior, and more.

Sharknado 3 is the first movie to be produced at Universal Studios Florida in a long while. In days gone by of music videos and movie production Universal Studios would be used to recreate a different destination, rather than appearing as Universal Studios itself. The New York backlot was used the most, not only to representing New York, but other major metropolitan areas.

In Sharknado 3 the New York backlot is actually made to appear as Washington D.C. As a Universal Studios fan it is great to see the New York backlot serving this purpose again, though its scene was shorter than I expected. Using this backlot to serve as a place setting for a different city is a nice hat tip from Sharknado 3’s production team, honoring the history of this place in the park.

You should also keep an eye out for buildings in the Production Central area being used as “Stand-ins” for other scenes in the movie. And a keen eye will catch the Mardi Gras food and beverage tents during one of the movie’s early scenes as well as the under construction NBC Sport’s Grill & Brew during the spectacular Universal globe scene.

I have to admit, this movie “genre” does not float my boat (boat jokes…. in a post about sharks……..ok moving on), but the folks at SyFy made a smart move by using Universal Orlando to the fullest. No amount of B and C list celebrity cameos or chainsaw vs. shark scenes topped seeing Universal Orlando in such a fun way. 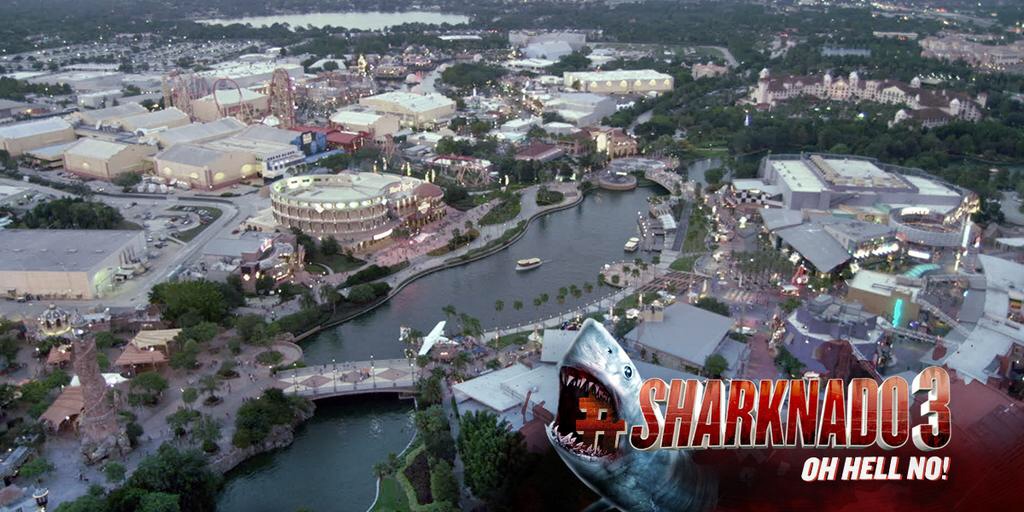 Did you watch Sharknado 3 yet? Tell us what you thought in the comments section below!