Universal currently owns and operates five theme parks around the globe (well, six, if one counts Wet ‘n Wild Orlando, which it purchased from the founder of SeaWorld back in 1998), though this relatively small number is certainly not from a lack of trying on the company’s part; it had locations lined up in both Dubai and South Korea that have long since fallen through, and it temporarily owned the PortAventura resort in Spain last decade, which consists of both a theme and water park.

And if the company has its druthers, it’s going to nearly double the number by the time the next decade comes to a close, thanks to planned parks in Russia and China and two brand-new additions to its Universal Orlando Resort (in the form of Volcano Bay, which just might take the title of best water park ever devised, and a long-gestating third theme park, which would probably take up residence down the road a ways). 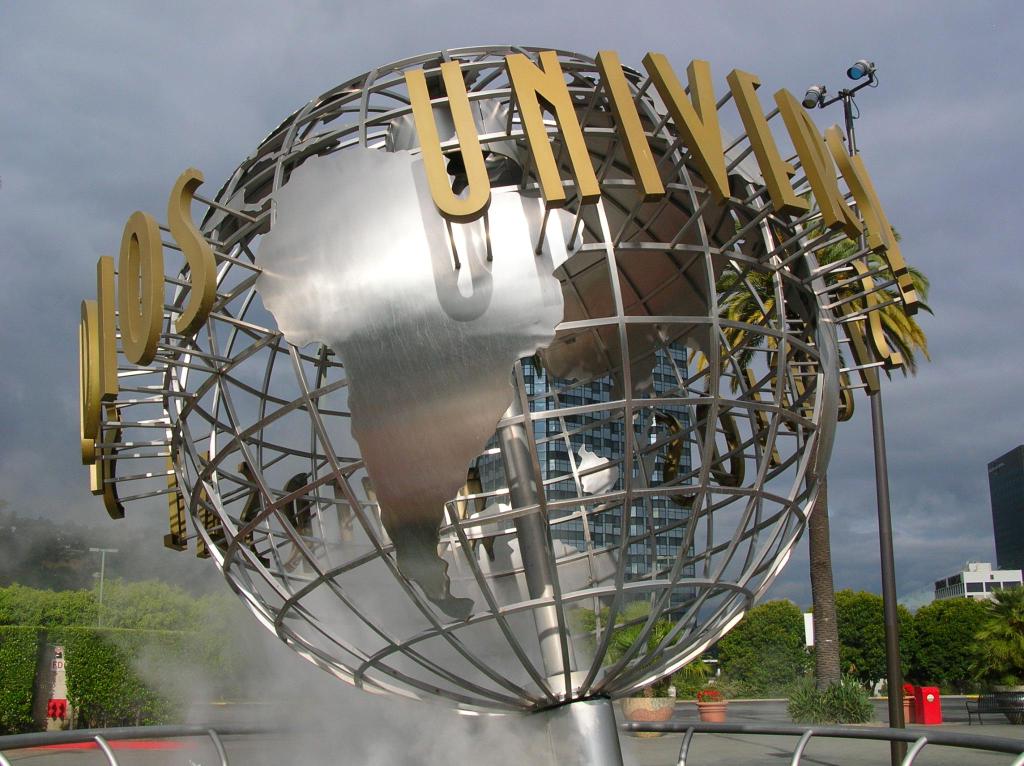 Why pay attention to Universal’s growing international empire? There’s one simple reason, actually, and it’s a rather intriguing one: much like Disney (whose model, of course, the company looks to be actively aping), Universal seems to be mostly recycling or otherwise reusing giant swaths of its previous theme park designs for its new locations – which means that, in turn, there is a rather good chance that whatever new elements are introduced overseas just might ultimately find themselves rebounding back to Florida (and Hollywood) sooner rather than later.

Yes, that’s right – by sifting through the discarded plans for, say, Universal Studios South Korea or combing over the concept art for Universal Studios Beijing, one just might be getting a sneak peek at certain design trends or pieces of technology that might pop up in Universal Orlando’s third theme park.

Let’s get started, shall we?

1. Mega-concentration of IPs
Universal Studios Hollywood, being the result of a natural (and slow) evolution of the company’s backstage film production tour from the 1960s, is essentially a theme park by accident; its attractions have accrued like barnacles on the filmmaking whale, resulting in a design that has been, over the past five decades, more haphazard and certainly squeezed than anything even remotely resembling Walt Disney’s meticulously mapped-out and lovingly-realized undertaking down the street in Anaheim. 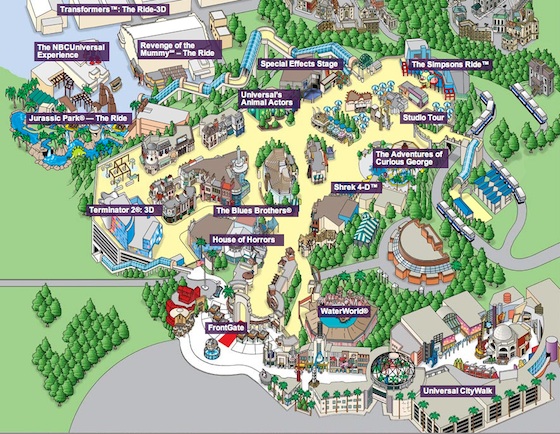 Universal Studios Florida (which opened in 1990) was Universal’s chance to rectify that, devising the location as a theme park first and foremost and as a film production facility secondly. For the first time in the company’s nascent history, it had themed lands (though most of them, such as New York, San Francisco, and Hollywood, were simply meant to be soundstage representations of real locations), with a number of USH’s attractions being ported over thematically to fit within them instead of being arbitrarily dumped wherever space or opportunity might present itself. 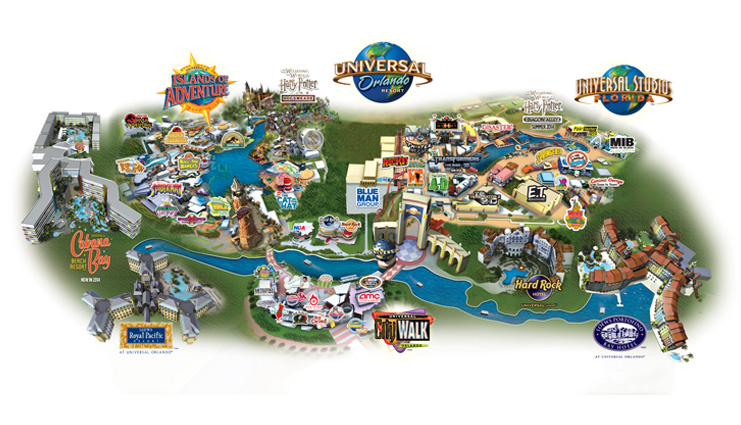 Both Universal Studios Japan (2001) and Universal Studios Singapore (2010) took that idea and ran with it, forgoing the film backlot angle altogether and instead focusing on the Disneyland-esque approach of fantastical lands, such as Universal Wonderland, Sci-Fi City, and Shrek’s Far Far Away. (Well, okay – yes, there’s still a lot of Hollywoods, New Yorks, and Madagascars, but they’re more for theme and less for practical filmmaking considerations.) 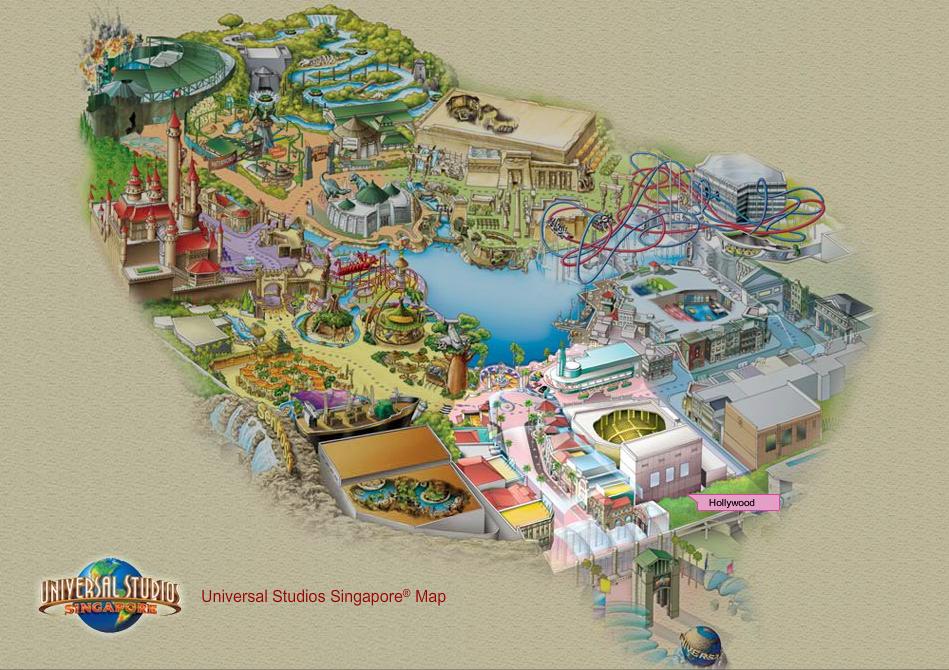 Universal Studios Beijing (2019), which is currently scheduled to be nearly three times the size of USF (that makes it roughly on-par with Walt Disney World’s ginormous Epcot), looks to take a slightly different tack on Universal’s park layout: rather than crafting new areas to house both original and repeat attractions, USB seems to be leaning in the direction of having a “greatest hits” collection of all the other locations’ E-tickets, ranging from Egypt to Sesame Street to both Wizarding Worlds of Harry Potter, replete with the Hogwarts Express connecting them. 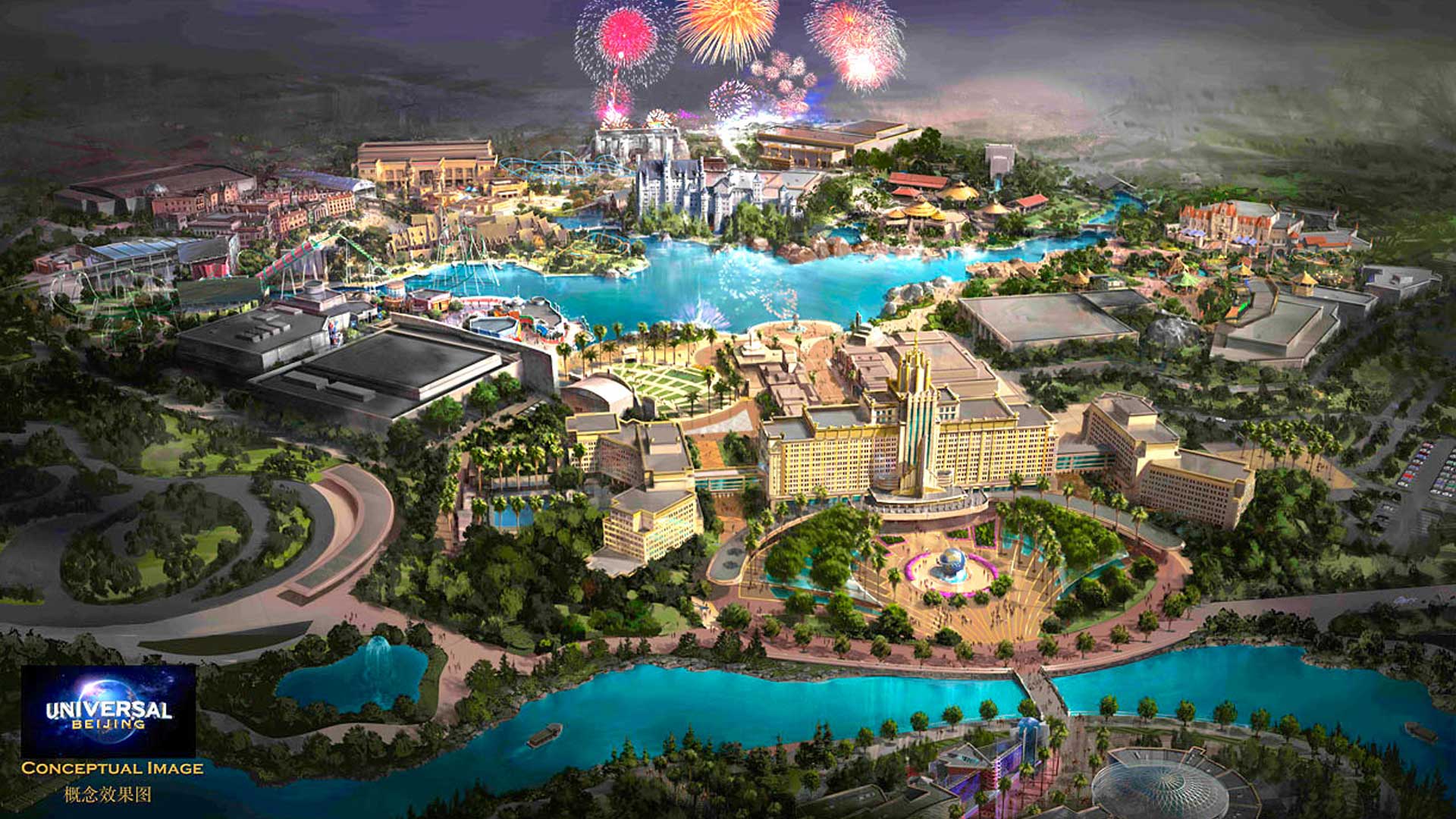 (It should probably be stated that this speculation is born strictly from the sole piece of concept art that has been released thus far, which could well be using all these components as filler instead of as an official roster. We’ll just have to wait and see as we get closer to its opening date.)

Should Universal take this same underlying approach to its third Orlando gate, it would contain several lands that consist of a packed-to-the-gills collection of overseas-exclusive rides, such as USS’s Battlestar Galactica dueling coaster and USJ’s Space Fantasy spinning coaster – along with, of course, a slew of new intellectual properties, which could hypothetically run the gamut from Star Trek to Fast & Furious (which is already going into place at USH later this year). This would actually help distance a possible third park from both USF and Islands of Adventure, as the emphasis would be placed on the attractions themselves instead of on their themed surrounding lands, as is seen in the brand-new Diagon Alley or the retrofitted Springfield, USA.

Think of it more as a Cedar Point and less as a Magic Kingdom – a potentially welcome and rip-roaring change of pace.

2. A mini-resort unto itself
Each of the locations at Hollywood, Osaka, and Singapore already feature – or will shortly – a CityWalk dining/shopping/entertainment district and at least one on-site (partnered) hotel, making them something of a mini-theme park resort (all they’re missing is a second park). South Korea’s now-discarded plans called for what would have been Universal’s most ambitious endeavor yet, resulting in a sister water park, tons of hotels and convention space, and the biggest CityWalk in the world – all of which seem to have been passed on to Beijing, which will be getting a 1,000-acre footprint (that’s even bigger than Universal Orlando’s non-contiguous 900 acres) right from day one. 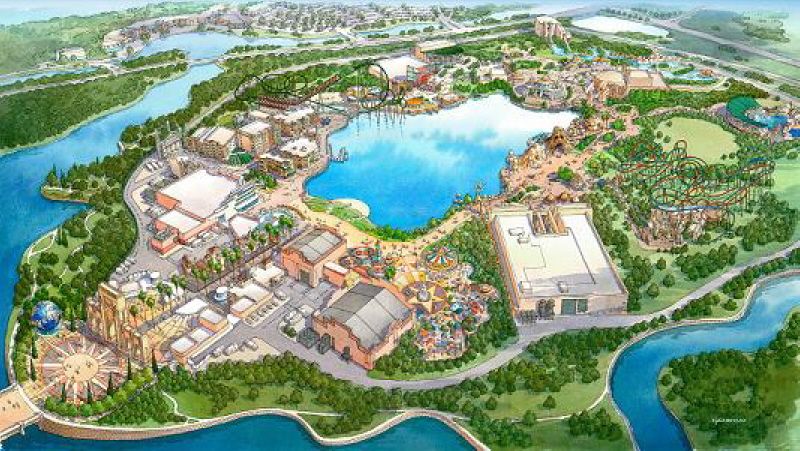 Depending on where Universal scoops up the land for its new Floridian site, it could skew more towards the Asian model than the Californian one; while getting several new on-site hotels is already considered a given (thanks to the company’s oft-publicized desire to more than double its number of rooms on-property), imagine receiving a second Volcano Bay or fourth and fifth inter-connected Wizarding World. Universal Orlando’s Site B would already, for all intents and purposes, be considered a second location that just so happens to share a number of services with its predecessor a few miles away, which means the company would have to design and promote its new property in an appropriately aggressive way.

Given how competitive Universal has already been with Walt Disney World over the past half-decade, it’s mind-boggling to think what would happen if it had two resorts that consistently tried to one-up each other.

3. A complete left turn
Universal Studios Moscow, which seems, unfortunately, more and more likely to be getting the axe, is something of an intriguing turn for the company – a “budget” park. At only 37 acres in size, the location would be completely indoors and feature an appropriately reduced ticket price: approximately $30.00. Think of it essentially as Universal’s version of DisneyQuest, Downtown Disney’s “indoor interactive theme park.” 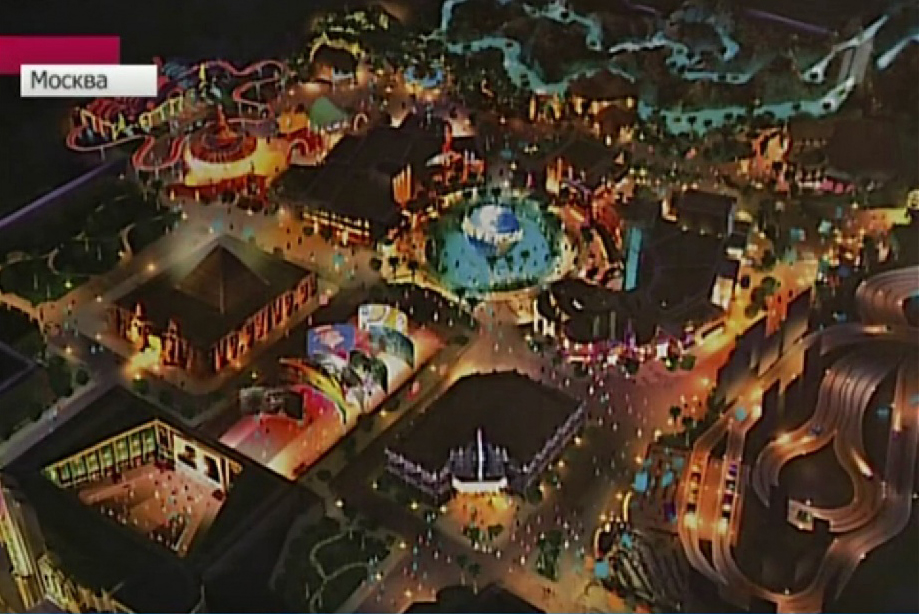 Now, of course, USM’s proposed layout was forced upon the company by circumstance; just as USS is part of a larger resort complex, Moscow is meant to be the same, sharing real-estate with a (unrelated) water park, hotels, a winter garden, and retail and office space. But what if Universal decides that this stripped-down, value-oriented direction is the best to head in, particularly considering that the 50-acre property Wet ‘n Wild is currently sitting on will, more than likely, be vacated within the next two years? In this way, Orlando’s third gate would feel and function much more like all the other attractions sprawled along International Drive, giving a different audience a decidedly different feel, though still with a taste of the theme parks proper.

Sound ridiculous? So did making food, gift shops, and, even, restrooms part of the themed experience just a few short years; now, after The Wizarding World of Harry Potter – Hogsmeade, it’s literally unthinkable to go back – not even for Disney, which is slowly bringing all of its new developments, from LeFou’s Brew to Avatar Land, in line with the new paradigm.

Despite the challenges involved, Universal could well pull the feat off again.

Which direction do you think Universal will go in with its next theme park – if any of these at all? Leave your insights below.

What happened to Gringotts?