As Universal continues its multi-billion-dollar overhaul of Universal Studios Florida, moving from area to area and replacing all of its lackluster or otherwise threadbare attractions with brand-new and highly immersive rides, there has been one rather large omission that has generated a lot of coverage in the theme park blogosphere: San Francisco’s Disaster: A Major Motion Picture Ride… Starring You.

Disaster has managed to accumulate so much hand-wringing thanks to a few special circumstances: it’s one of the few remaining opening-day attractions (even if it received a facelift into its current form back in 2008); it’s seen continual downtime over the past several months; and it has a huge footprint in the park, meaning that a potential replacement could be on the rather large side. 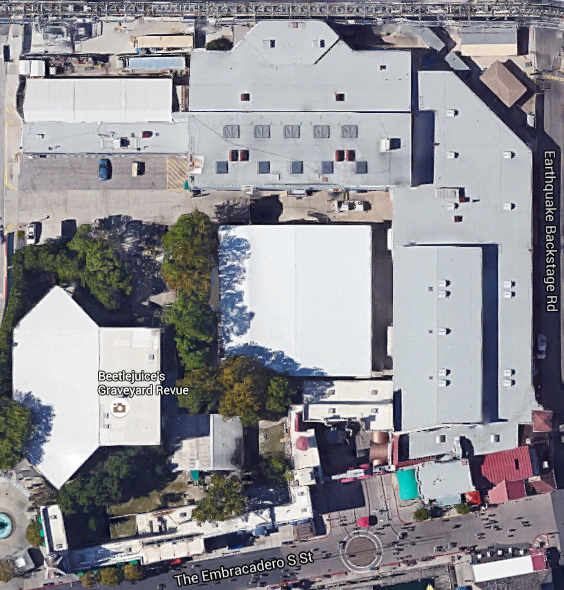 The Disaster and Beetlejuice show buildings.

It’s been largely accepted in the rumor mill that Fast & Furious, which just bowed at Universal Studios Hollywood’s tram tour to much fanfare from Universal (and, unfortunately, much criticism from guests), is the most likely candidate to take over Disaster’s well-used residence. What’s just recently made a new ripple in the themed pond, however, is a report from Orlando Theme Park News stating that the inclusion of Fast & Furious will actually precipitate a whole new round of construction that has hitherto been unconsidered, resulting in two major changes to the entire park.

#1 – Bye-bye, Fear Factor
Beyond Disaster’s (purported) imminent closure, there is another attraction that is now rumored to be on the chopping block: Beetlejuice’s Graveyard Revue, the next-door show which has also been a long-standing staple, in one form or another, since its debut in 1992. Yes, that’s right – nearly all of San Fran will be leveled to make way for just one ride. 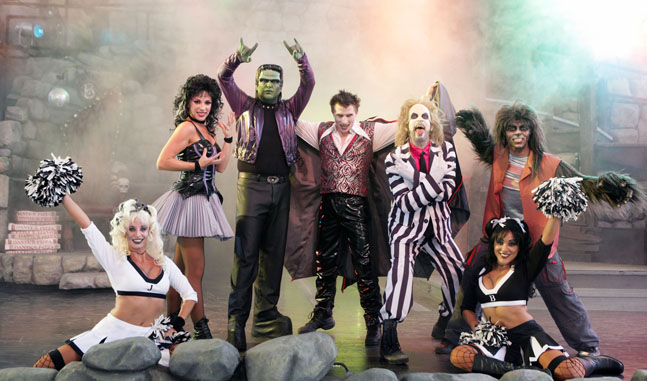 But Universal isn’t ready to sacrifice two attractions just for the sake of one new one, even if it may be one of the biggest – and, possibly, one of the most expensive – in the company’s history as a theme park operator. According to Orlando Theme Park News, the long-lived show will be kicked out of San Fran and will make its way around the lagoon to World Expo, taking up permanent residence in the Fear Factor Live theater.

Although wholly unexpected, the move does end up killing several birds with one well-placed stone. Beyond the obvious salvaging of Beetlejuice itself, it manages to finally oust Fear Factor, a show which has somehow outlasted (and outplayed?) its television progenitor; whereas the series ran from 2001 to 2006 (and was later revived for a short-lived seventh season in 2011), its theme park counterpart has been operating continuously, albeit seasonally, since 2005 (which, interestingly enough, seems to continue the tradition of that theater being used to host to a production that long overstays its welcome – The Wild, Wild, Wild West Stunt Show initially ran there from 1991 to 2003). 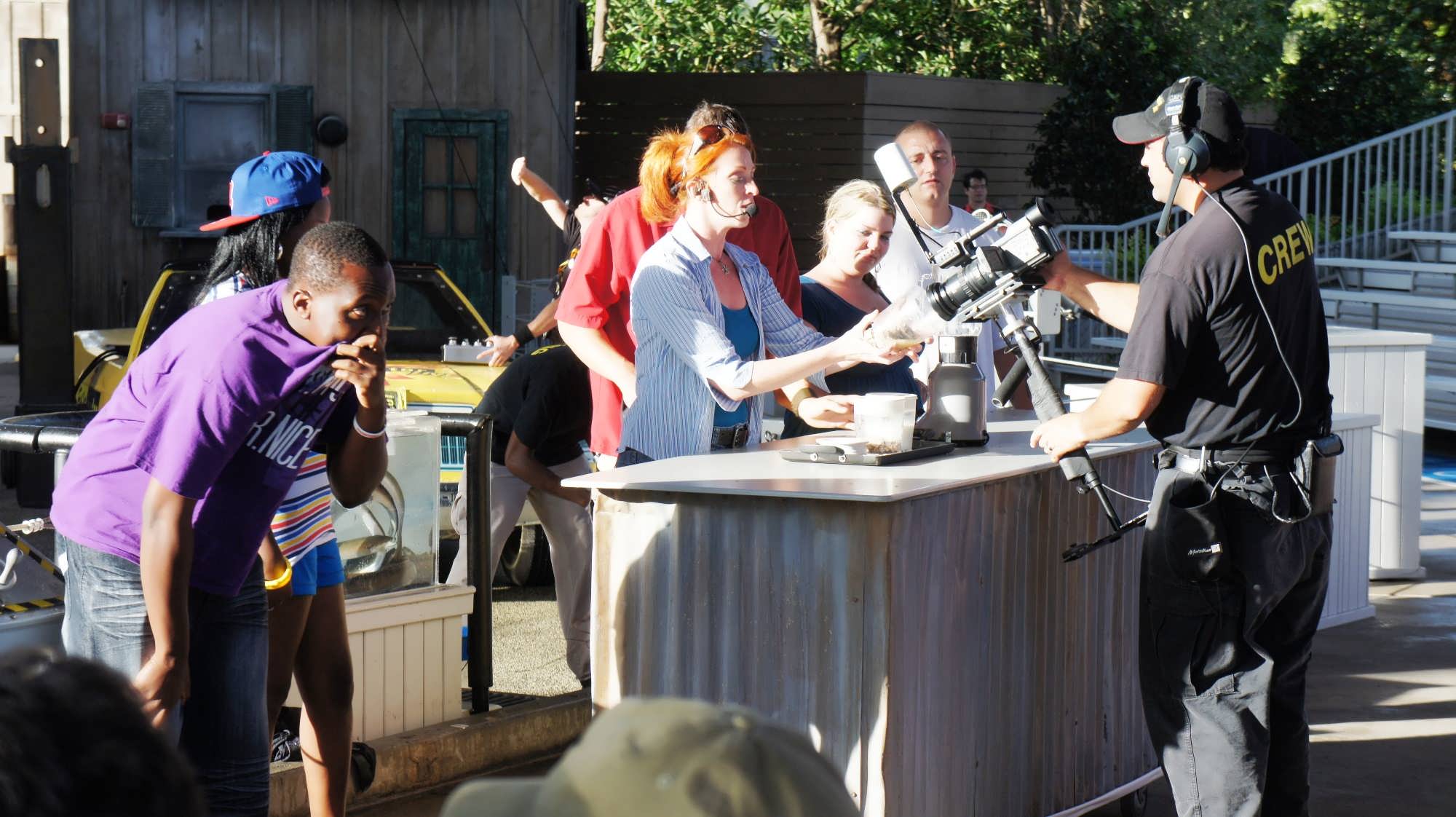 And Beetlejuice, as a concept and production both, is more at home in the rather nebulous catch-all that is World Expo’s premise, righting a thematically-incongruous wrong that has plagued the show since day one. (Why would a movie that is set in the ethereal location known as Connecticut be dumped into the San Francisco section of the park?) Although admittedly a quibble in the grand scheme of themed things, it is nonetheless the sort of minor detail that Disney long ago nailed and which helps to cement a guest’s belief that she has truly been transported to a different time and place – something which Universal will have to absolutely master if it wants its Orlando resort to be a viable alternative to Walt Disney World.

There is one last thought to be added to this possible round of musical chairs. Should the totality of previous rumors hold true and Universal really is going to knock down Fear Factor Live’s theater in order to make way for the third Wizarding World of Harry Potter (that’s the Ministry of Magic, for all those Muggles confused at home), that means Beetlejuice’s Graveyard Revue itself isn’t meant long for this world; should Diagon Alley’s construction cycle be more or less replicated for Harry’s third phase, visitors should expect only roughly another year of the Ghost with the Most at USF. Is that too short a time to justify all the hassles associated with the move, and does this mean that Universal won’t be pursuing the Ministry of Magic, after all? Or will it simply relocate Beetlejuice to a third home?

Only time, of course, will tell.

#2 – San Francisco will be replaced by…
Poor San Francisco. It was never meant to be an individual land, standing by itself; right from the word go, it was amalgamated with Amity, the former home of Jaws – “San Francisco/Amity,” it was officially called. 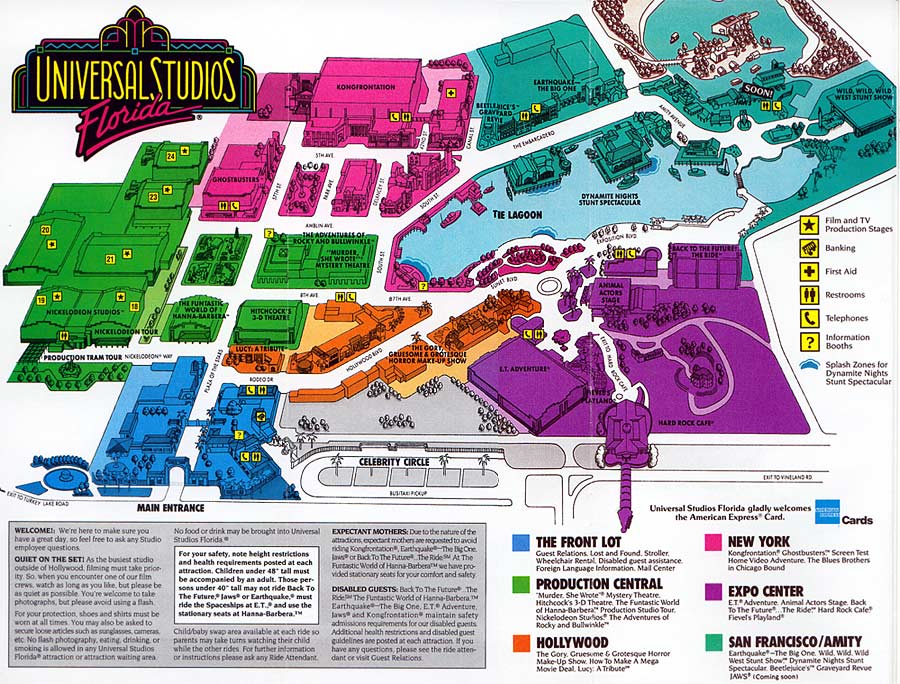 Once its better half was shuttered in early 2012 to eventually make room for Diagon Alley, however, it was left just as “San Francisco,” and Fear Factor Live was kept part of the land as a disjointed afterthought. That mistake wasn’t remedied until two years later, when FFL got grouped with World Expo, and what was once the park’s single biggest area got trimmed down even more, to just the two attractions and a small handful of food options. The land, for all intents and purposes, was a wasteland of forgotten concepts and progressively-more-broken-down rides.

Fast & Furious, of course, affords the opportunity to change all this – a brand-new ride with one of the most popular film IPs in history and one of the single biggest footprints in any of Universal’s parks around the world. It also provides Universal with the perfect excuse to give the entire land (such as it comparatively is) a breath of fresh air, a coat of new paint, and, even, an entirely new name. 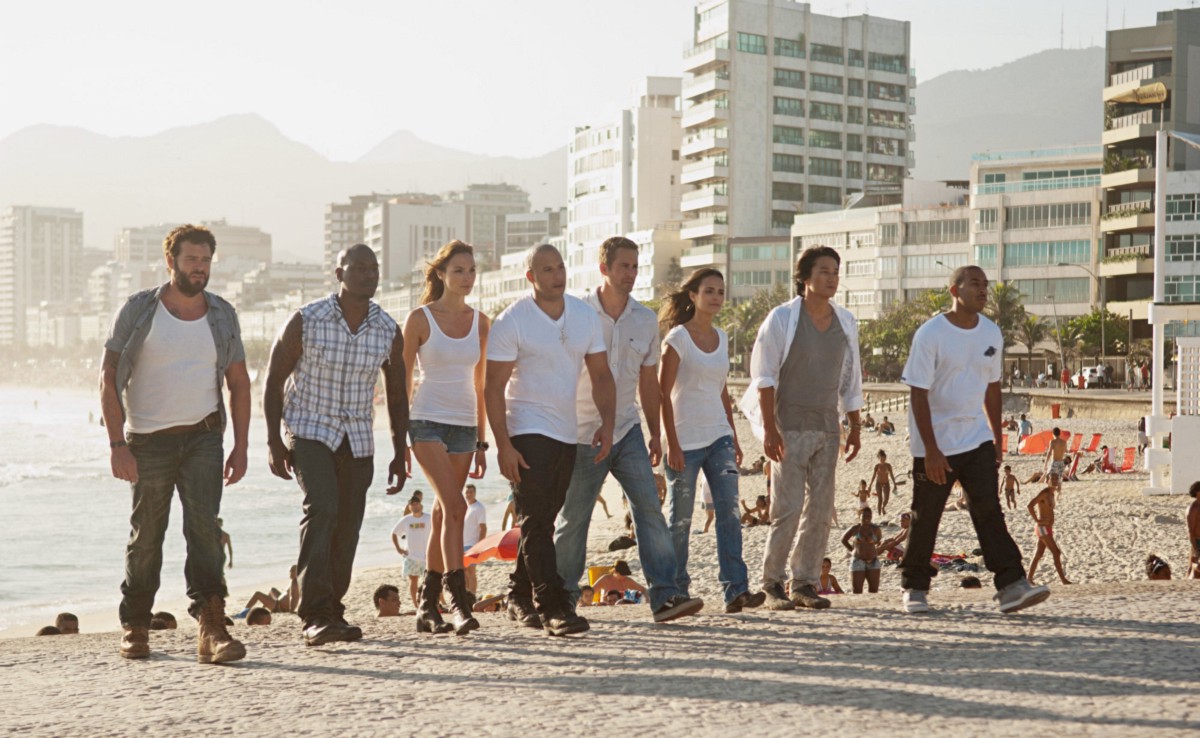 Word on what this makeover will actually – and structurally – entail for the area is non-existent, so all we can do, at this stage, is guess. First up are the four food establishments, strung out all along the waterfront: Lombard’s Seafood Grille (full service), Richter’s Burger Co. (quick service), San Francisco Pastry Company (quick service), and Chez Alcatraz (bar). The last two can simply be given a new name and be considered more or less rebranded, but the first two will actually require a bit of retheming, if not a full renovation into something entirely different and more appropriate for the southern Cali location. (For a more in-depth discussion on this particular point, be sure to check out the latest episode of the Orlando Informer Podcast.)

And then there’s the general ambiance of the streets and buildings themselves. Once again, should Universal choose to go cheap on the theming (and instead save all that cash for Fast & Furious itself), there is much that can simply be repainted and be considered thematically competent, though the likes of Ghirardelli and the Wharfside Cannery – two Bay-based landmarks – will need to be replaced by LA mainstays. On the other end of the spectrum, however, Universal could opt to demolish all of the present architecture and start anew, perhaps with towering skyscrapers and other SoCal flourishes that could conceivably complement its sister land across the lagoon, Hollywood. It all depends on just how much of a jolt the company thinks bringing its storied film franchise to the park will generate.

How long will it take for us to see if this report has any veracity behind it? Not that long at all, actually – late next month or early September is Orlando Theme Park News’s stated timetable for Disaster to close, which would, perhaps not coincidentally, make its demise line up with The Incredible Hulk’s protracted refurb.

Yes, sir – it’s looking more and more like (yet another) brand-new day at Universal Orlando Resort…

Do you think San Fran should be getting the axe? Is LA a good replacement? Let us know in the comments below.