Let’s walk through Hogsmeade Station, shall we?

Prolific rumor monger HateToFly is at it again over on the Orlando United boards, and this time, he’s going for gold: a breakdown of the Hogsmeade Station inside Universal’s Islands of Adventure, where guests will board the Hogwarts Express.

(HateToFly is quick to point out that he’s simply “guessing” with his virtual tour, but given how spot-on he’s been in the past – not to mention his plethora of inside information – smart money is on his “guesses” coming mostly, if not completely, true.)

Let’s start outside and work our way in. The exterior of the station, seen in the image above, will be “loaded” with a number of landscaping flourishes, such as embankments and tons of plants, to help spruce the space up but also, more importantly, to help block out the surrounding structures, most notably the Eighth Voyage of Sindbad stunt show building.

Standing in front of the building, the exit is on the left, the Express Pass line is in the middle, and the old-fashioned standby line is to the right. The queue for this last option actually shoots out behind the Sindbad building, wraps back around to Hogsmeade Station, enters on the first floor, and then eventually works its way up the second, where the loading platform is. Both the Express and standby lines will pass through a turnstile booth, which will have stroller parking on the left and the option to upgrade your pass with the park-to-park option on the right.

The loading platform itself is comprised of “an iron and wood overhand, with tons of iron work, [and] complemented with outstanding stone work.” It’s surrounded by a line of pine trees, which once again acts as a screen, this time against that incredibly-fun-but-really-visually-inconvenient Dragon Challenge. Additionally, the concrete wall that runs along the back of the station will act as primarily a sound barrier against the Ice track, which is literally right behind the new structure.

Now to bring it all together: the pink line in the above picture is the exit path. The orange and blue lines are the Express and standby queues, respectively. The green section is the loading platform, while the red box is the exit area – which will, by the way, be the only time guests will have the opportunity to see the extremely detailed Hogwarts Express engine car, with its billowing steam and other special effects (you can’t see the locomotive when entering/exiting the train at Platform 9 3/4 due to spatial constraints).

And if all this weren’t enough, HTF has one last little tidbit to drop our way: while the entry arch into Hogsmeade won’t be changing in the slightest, the brand-new area between the entrance and Hogsmeade Station will be getting a not-insubstantial retheming…

The very first effect of this has already been seen, as the Lost Continent midway games are in the process of making their way over to their new digs in Jurassic Park.

A fresh look at the Wizarding World of Harry Potter

A new piece of Diagon Alley concept art was found at Universal’s travel agent site. It’s not much, but at a time when Uni isn’t willing to talk about Diagon Alley at all (that’ll have to wait ‘til next year, in the run-up to the grand opening), it’s something welcome nonetheless.

Universal’s travel agent site also delivers a little bombshell in its own way. In the Diagon Alley section, it reads “with a park-to-park ticket, [guests] can ride the Hogwarts Express” between the two Wizarding Worlds. After literally months of sometimes-intense speculation regarding whether Universal really would make visitors with one-park tickets pony up for a Park-to-Park upgrade – remember, this is the very first time in theme park history that anything like this has ever been attempted – this seems to be the final say on the matter… for now.

And speaking of new (or rarely seen) Diagon Alley artwork, the latest issue of Family Getaways has some humdingers:

This artwork offers tantalizing glimpses into our (very near!) future.

Finally, Orlando Attractions magazine has a photo of one of the first Gringotts Bank ride vehicles being loaded into the show building – as best as we can tell, it’s the rear car of the two cars that pair up for the ride.

To learn more about the Harry Potter expansion at Universal Orlando, visit the Diagon Alley page in the OI Universal Center.

Bear with me for a moment here.

In 1992, Disney decided to follow up on its extremely successful additional parks in Florida and Tokyo by building one in France. Disneyland Paris would be only the second location on the planet – after Walt Disney World Resort, of course – to be designed from the ground up as a full-fledged resort, with multiple theme parks, hotels, and, of course, a Downtown Disney shopping/dinning district.

The Paris location was originally called Euro Disney when it opened in 1992, and it was an utter disaster.

Today, the renamed Disneyland Paris draws some 11.2 million visitors annually, just a fraction of the two American spots (and this is a decided improvement). The financial woes caused Disney to significantly draw back on the rest of its plans for Paris, as well as those for Anaheim, where the company was already gearing up for the expansion of the original Disneyland into Disneyland Resort. In addition, the stumble in Paris made Disney be much, much more careful about just how it was going to handle its next (eventual) overseas development.

That development ended up being Hong Kong Disneyland, which opened just a little over eight years ago – in phases, the first time this has ever been done. Disney, which owns approximately 48% of the park, was happy at the wait-and-see attitude, but the Chinese were less than impressed with the tiny theme park (it’s just a little over half the size of Magic Kingdom) and the miniscule amount of attractions. Obviously, something needed to be done.

There’s been the attempt at expanding HK Disneyland’s offerings over the past two years; the company has dropped $465 million on the effort, and it’s paid off by making the park 25% bigger and driving attendance up 14% (now it’s only the second-to-last visited Disney park on the planet) and by also delivering to the world Mystic Manor, Hong Kong’s version of Haunted Mansion, which is internationally critically acclaimed.

But all this pales in comparison, of course, to this week’s Marvel announcement. 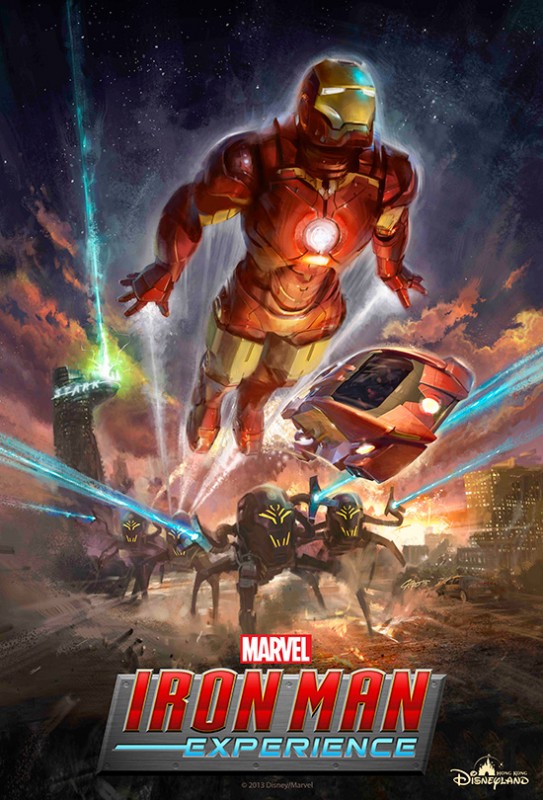 The Iron Man Experience will consist of a walk-through of the Stark Expo (which sounds suspiciously like the temporary exhibit at California’s Disneyland earlier this year), showcasing all the various Iron Man suits that Tony Stark has crafted over the past few years. From there, guests will board a motion-simulator ride vehicle to “take flight with Iron Man on an epic adventure that, not surprisingly, pits Iron Man against the forces of evil” right in the streets of Hong Kong. Just what that evil is has caused some confusion, but it looks to be Hydra villains introduced in the recent Avengers cartoon show.

From there, it’s exit to retail and also a photo op with the Avenger himself. All of this will be located in Tomorrowland, in exactly the spot originally reserved for Star Tours: The Adventures Continue (which is why the ride vehicles look so eerily familiar).

Will this be enough to turn around the sagging situation in Disney’s first Chinese park? By all accounts, yes, even if it’s a retread, on the one hand, and a retheming, on the other – the first Marvel-based theme park ride should be a major draw, particularly considering that (a) Disney World Resort can’t field it, due to ongoing contractual obligations to Universal, and (b) Disneyland Resort simply doesn’t have the space for it. Throw in the huge success Iron Man 3 saw in China this past summer, and you can see how the numbers overwhelmingly add up for Disney to move its hype machine overseas.

And there’s a takeaway to be had closer to home: any international park, Disney-owned or otherwise, that can innovate in terms of theming and succeed in terms of finances only underscores the growing perception that our own Walt Disney World is the last-place, least-cared-about destination in Disney’s global portfolio. More than providing a friendly boost, the Iron Man Experience actually ratchets up the pressure on the still-in-the-blue-sky-phase Star Wars Land at Florida’s Hollywood Studios – and the fact that Hong Kong’s new attraction will open a good year or two before Star Wars Land only adds insult to the injury.

Do you like Game of Thrones? Then check this out

Now for something completely different:

As you may or may not know, I write for several other sites as well as for Dan’s wonderful Orlando Informer, and one of these is the immensely popular Tower of the Hand, a Game of Thrones and Song of Ice and Fire super-site. I had the distinct honor of helming their very first anthology book, Tower of the Hand: A Flight of Sorrows, which came out last October as an ebook only. Now, due to popular demand, we’ve released a special print Collector’s Edition (256 pages, $15.99) just last week. It contains several new (and exclusive) essays, a behind-the-scenes making of, and an extremely limited print run – it’s available for the month of October 2013 only.

If you like HBO’s Game of Thrones and have enjoyed the novels they’re based off of, I strongly suggest checking the book out by clicking here.

DISCLAIMER FROM THE EDITOR

Please remember when viewing this post that a rumor is a piece of unverified information of uncertain origin; a statement whose veracity is not quickly or ever confirmed. So even though we try our best to present solid speculation, there’s no way to guarantee any rumor will come true (then it wouldn’t be a rumor anyway).

Thanks to Marc for researching the latest rumor buzz from sources across the Internet and condensing it down into a single post for us each and every week!

View all of our Rumor Round-Ups

THE BIG 5: Top five “hot spots” for an evening of entertainment on I-Drive

Incredible and amazing. Thank you for the great info. Thank you Universal for working so hard for the guests!

Andre, that system does look like the Mummy cars. That makes perfect sense too. Looks like stripped down mummy cars which would look just like the Potter movies.