Reader poll: If you could, which closed USF attraction would you bring back? 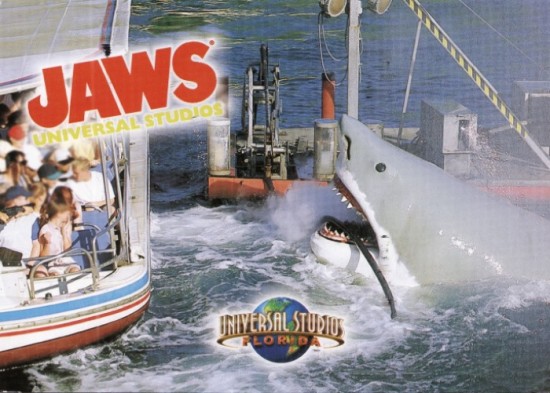 Universal Orlando is recognized around the world for their collection of first-class attractions. Unfortunately, as we all know, to make room for new attractions sometimes old ones have to be replaced. Over the years we’ve seen attractions that we hold near to our hearts disappear from Universal Studios Florida, the original theme park at Universal Orlando. In this week’s poll we take a look at the most popular lost attractions:

JAWS and the Amity backlot of Universal Studios Florida is the most recent area to close. Jaws gave it’s last voyage on January 2, 2012 to make room for the new Wizarding World of Harry Potter – Diagon Alley expansion. On the JAWS ride, guests would hop aboard a ship with the world-famous skippers to explore the wonderful Amity Island. But things took a turn for the worst when JAWS makes his presence known and its kill or be killed! This attraction thrilled guests until its closing, a true classic among park goers.

Kongfrontation gave guests an eye-to-eye encounter with a massive King Kong animatronic. Riders climbed aboard an ariel tram and went above the streets of New York City on the run from King Kong. There was plenty of destruction to see, courtesy of Kong, as riders tried to escape his path. Thankfully guests eventually made their way to safety and out of the city, where they were given the opportunity for a King Kong photo op. Kongfrontation closed in September of 2002 and was replaced by Revenge of the Mummy.

Back to the Future: The Ride was a simulator attraction based on the Back to the Future film franchise. Park guests were asked by Doc Brown to be volunteers as part of a time travel experiment. Riders boarded a DeLorean ride vehicle and soon found themselves in a crazy adventure across time, in hopes of capturing the movie’s villain, Biff. Back to the Future’s last time travel adventure was in March of 2007; it was replaced by The Simpsons Ride, which opened in May 2008.

Nickelodeon Studios was both a family attraction and working production studios that was with Universal from the beginning. Double Dare, GUTS and All That are just a few of the classic Nickelodeon shows that were filmed on-site. Sometimes guests were allowed inside to be a part of these show’s studio audience. There was a 40-minute behind the scenes tour that took park guests through various Nickelodeon sets and offered a look into the different production areas — and if you were lucky, you sometimes got a glimpse of your favorite Nick stars! Nickelodeon Studios permanently closed in 2005 and is now home to Blue Man Group.

We all have our favorite memories of past attractions, so now we want to know: if you had the power…

Upset your favorite wasn’t available as an option? Please tell us in the comments!

And after you’ve voted, here are a few fun blog posts to check out:

Remembering Universal history through memorabilia (plus, how to find the best stuff)

Nickelodeon Studios: A cherished history & our hope for its return

View all of our blog posts tagged with “UOR history”

Last week’s poll: The best place to party in Orlando? With 46 out of 73 votes, Universal CityWalk wins. I guess we should have expected that! View all of our reader polls

It would have to be Jaws. It’s just synonymous with Universal :o(

WHY ARE WE LIMITED TO JUST 1 VOTE? ( SAD FACE ) IF I HAD IT MY WAY WE BRING BACK JAWS, KONGFRONTATION, BACK TO THE FUTURE, ALFRED HITCHCOCK THE ART OF MAKING MOVIES ALL OF THEM WERE UNBELIVABLY AWESOME! YOU REALLY CANT OUTWIEGH ONE AGAINST EACH OTHER THERES ALWAYS ROOM TO GROW I SAY INSTEAD OF GETTING RID OF THE OLD BUILD AND ADD ON! ( LIKE DISNEY DOES NO OFFENSE ) BUT YOU CONTINUE IN TRADITION AS YOU TRANSCEND INTO THE NEW GIVING ALL THE CLASSICS AND INTRODUCING NEW THINGS AS YOU GROW~

Has got to be Back To The Future! 🙂

Jaws, we were fortunate enough to ride it before the official opening because we got talking to the operators, then took our kids for the first time 12 years later and our three year old daughter sat on the kerbstone and cried when the ride closed for the night because she wanted to ride again

Back To the Future

Back to the future.

Unfortunately I don’t give my profile details out except to those I know personally, so I was not able to vote. if I had voted it would be for BTTF 🙂

@Sue Whitfield You don’t have to sign in to vote. Just click your selection, and when you see the pop up, click “Keep vote anonymous” at the bottom 🙂

Back to the future!

Back to The Future Ride

back to the future and jaws win bring them both back

Hitchcock as I never experienced it, I went in 2002 but was too young to appreciate it!  Now I am a Hitchcock fan I would love it!

This makes me think of a 1989 USO mug I found at a thrift store this week. (I think it was made in 1989 and put in the stores when USO opened in 1990.) It has several rides featured on it but only one or two are still there. I should post a picture since y’all would appreciate it. 🙂

I would have to go with Jaws, it still is known and loved by all age groups. While it did need a major update, it still was fun and interactive.

Jaws. They should create a “universal gold” park and bring back the classic rides

back to the future loved it

Hard to pick between Kong & Back to the future, bring them both back. Dump twister, update T2

What jaws has shut down?!! Noooo I haven’t been for a few years!

I miss all of those as well as the wild wild wild west stunt show and the ghostbusters show. I feel like USH is not as good as it was 12 years ago.

I miss all of them but if they keep replacing things with better rides then what’s the problem?

I’ll always miss Jaws-one of my life-long dreams was to run that ride. Kongfrontation, too, the attention to detail was amazing. And BTTF. Oh hell, I miss them all. Except Jimmy Neutron.

Jaws. It closed a month before we got there.  =(

Jimmy Neutron’s Nicktoon Blast was one of my favorite rides at the park. Unfortunately, it was not included in this poll, but if it was it would most definitely be my choice. Who could forget traveling through all of Nickelodeon’s shows such as Spongebob and the Fairly Odd-Parents or ending with the chicken dance?
Also, the replacement of Despicable Me I found to be disappointing. The effects and ride are not as immersed and add the opportunity to get motion sickness.