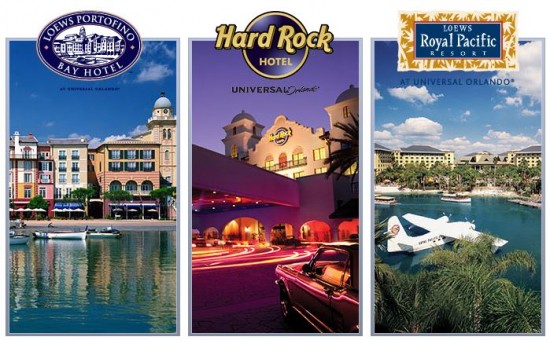 One thing I love about Orlando is the variety of beautiful hotels that are in the area. At Universal Orlando specifically, guests will find three AAA Four Diamond award-winning luxury resorts: Loews Royal Pacific Resort, Hard Rock Hotel, and Loews Portofino Bay Hotel.

Not only are these properties visually stunning, but they offer a lot of extra perks when you stay on-site. For starters, you’re only footsteps (or a water taxi ride) away from CityWalk and both theme parks. You also get unlimited Express Passes and priority seating at restaurants, just to name a few benefits!

Let’s take a closer look at each on-site property:

At Royal Pacific you’re transported to a tropical paradise, surrounded by lush landscaping and an island theme. Dine on-site at one of Royal Pacific’s several restaurants and lounges, including Emeril’s Tchoup Chop. On Saturday nights you can participate in an authentic luau at the Wantilan Luau, complete with Polynesian food, live entertainment, and complimentary mai tais. You can also kick back and relax at the lagoon-style pool, one of the largest of its kind in Central Florida.

At Hard Rock guests are treated like rock stars! There is an on-site Rock Shop featuring authentic Hard Rock merchandise and apparel, a body rock fitness center, and live concerts in their lobby on the last Thursday of every month (on August 29 Modern English is performing). But the most popular amenity at this hotel is the 12,000 square foot beach pool, complimented with a water slide and an underwater music system. This hotel is classy yet casual, and for the music fan it features over one million dollars worth of rock ‘n roll memorabilia on display in its public spaces.

Now the moment of truth…

See our in-depth comparison of the three properties

Where’s Cabana Bay Beach Resort? It doesn’t open until next spring, so Universal’s newest property isn’t part of this poll. But we do have a lots of information about the hotel if you’d like to learn more — click here.

Via Napoli at Epcot’s Italy Pavilion: This is the best pizza in “the world”

Royal Pacific, loved it so much we went back again the next year.We will be back when the new Harry Potter extension is built.

All these people saying royal pacific have obviously never stayed at the portifino bay hotel!

I agree with Ken! People think Royal Pacific is so amazing. It’s a joke compared to Portofino Bay. Hard Rock is great too. It’s a lot of fun and there is no shortage of alcohol!

We keep shying away from Portofino because the walk to the park is so easy from Royal Pacific!

Yes, that Royal Pacific walk is really short compared to the Portofino. We almost always skip the boat from Portofino cause we walk pretty fast and tell ourselves that we can have an extra cookie at the parks then.

I love both royal pacific and hard rock, both were amazing! Stayed at portifino once, liked it but I would say its more older adult oriented.

We (Mama & OrlandoInformer) got engaged at Portofino. It’s hands down my favorite resort!

MamaInformer We did, and as always thanks for saying “yes” 🙂

You’re lucky to be able to afford any of these hotels. Some of us have to slum it on International Drive to be able to holiday in Orlando

@Joy ShawIf you can get yourself an annual pass, depending on timing you can sometimes get into Royal Pacific for as low as $120 a night – probably not too much more than you’re paying on I-Drive. We have a entire page on our site about this topic if you’d like to learn more: https://orlandoinformer.com/wpold/universal/on-site-hotel-annual-pass-discount/.

Joy, I do the same thing as the advice from Dan. You only need to buy 1 annual pass for the discount on the room. Everyone in your party up to 4 also receive Front of the line passes for as many rides as they can walk on the day you check in and the day you all check out too. We see families buying front of the line passes every day at the registers and they spend like $60/ person and they can only ride each ride once on one day and not 2 days like your check out… Read more »

CaptainAction Lots of good info in there, thanks for sharing 🙂

I have been fortunate enough to have stayed at all three and I have to say for theming, appearance and comfort Portofino wins hands down. It is just a beautiful resort and sometimes it is even cheaper than The Hard Rock because that is the most popular with the younger crowd. The Royal Pracific is hardly slumming it by the way but the rooms are smaller and so is the price!

I have stayed at the Portofino Bay Hotel love that hotel a lot.

I have stayed at Portofino Bay and the Hard Rock. Loved them both but Hard Rock’s location is better. I prefer the atmosphere at the Hard Rock. Portofino is a bit too formal for me. Enjoyed the music at hard rock but we always go back to the Portofino to get out picture taken by Alex and his crew at the Family Art Studio! Just left Orlando today and we are trying to figure out when we can go back.