According to the annual TEA/AECOM Theme Index released yesterday, attendance data for 2012 reveals increases nearly across the board at major theme parks/amusement parks, with strong performance in both North America and Asia. Attendance at the top 25 parks worldwide grew 5.2 percent, to 205,906,000 visits in 2012. Attendance at the top 20 water parks worldwide grew by 5.4 percent, to 25,005,000 visits in 2012.

Here are the top 20 Amusement/Theme Parks in North America: 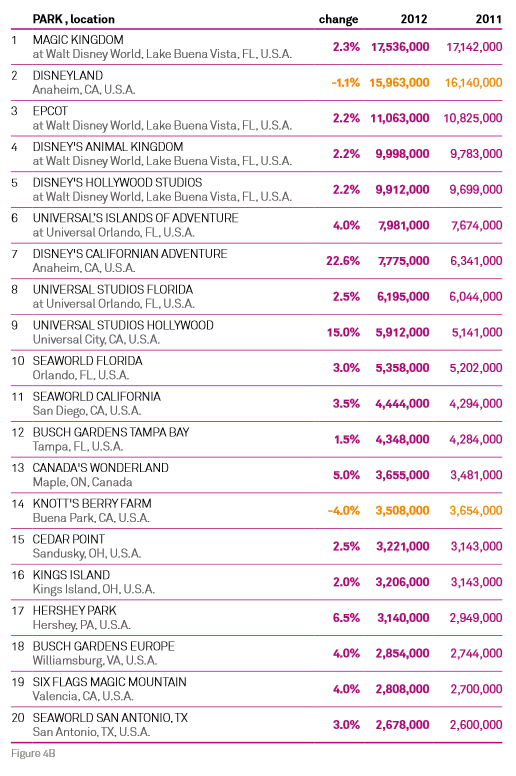 The report is available free online:

John Robinett, Senior Vice President, Economics, at AECOM, says, “The major operators in Europe, Asia and North America all had a successful year – but Asia is the really dramatic news. We forecast in last year’s Theme Index that the industry in Asia would begin to outpace the industry in North America, and the 2012 report contains the first clear sign of it: Our figures show that water park attendance totals in Asia have, for the first time, surpassed those of North America.”

The TEA/AECOM Theme Index and Museum Index is a collaboration of the Themed Entertainment Association (TEA) and the economics practice at AECOM, a global provider of technical-professional and management-support services. This calendar-year study of global attractions attendance is a free resource for park operators, land developers and the travel industry. Top worldwide theme parks, amusement parks, water parks, museums and theme park group operators are named, and industry trends are identified.

The complete TEA/AECOM Theme Index and Museum Index examines attendance trends by geographic region and park type, and includes rankings of top attractions. The full report is available free of charge on the TEA (http://www.TEAconnect.org) and AECOM (http://www.aecom.com/economics) websites as of June 4, 2013.

Aquatica introduces After-2pm Pass for FL residents: Enjoy SeaWorld’s waterpark every afternoon in 2013 for the price of a single day ticket

If the enormous crowds hovering around the ride just for the possibility to ride is any indication. The crowds are going to be huge when the ride actually opens!

I wonder if the Hollywood increase was because it is the first major attraction in several years. USF (Including IOA) is on it’s fifth straight year of major attractions opening (going to before the Comcast buyout). I think we may see an increase, but not as much due to the massive amount of new attractions over the past few years.

Any recommendations for the Summer Concert Series? My party is going to the concert on 29 June. Do they manage the line by assigning numbers to those who arrive early but would like to pop in and out for food, rest rooms, rides without losing their place in line?

@Anita Sliman They don’t assign numbers, but they do allow groups of guests to line up as early as park opening (if the artist is popular enough). If you come in a group, people can leave one at a time, but if the whole group leaves the line then you’d lose your place. Learn more on our Summer Concert Series page: http://bit.ly/oiscs13.