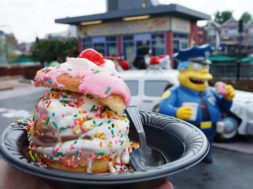 Orlando’s own House of Horrors

The demolition of Soundstage 44 is moving lightning fast, with crews working during the short gaps of rain to take down the building that formerly housed the Hercules and Xena: Wizards of the Screen attraction. The buzz going around is that there will be what amounts to a year-round version of Universal’s mega popular Halloween Horror Nights in this spot, focusing on the classic monsters in Universal’s stable (Wolfman, Frankenstein’s Monster, the Creature from the Black Lagoon, etc) in a walk-through haunted house-like attraction. It would be similar to Universal’s House of Horrors in the Hollywood park.

If done right, this could be a huge boon to Universal as most park guests would love a taste of the excellent Halloween Horror Nights flavor during the ten plus months that event is not running, and it allows an opportunity for the “classic” characters to get a chance to shine. Positioned directly next to the Monster Café, this would a natural tie-in and give Universal a chance to put a focus on some of their neglected in-house characters rather than license a new property.

See our photo gallery of the Soundstage 44 demolition at the bottom of the post.

Some former WWE stars may be showing up at TNA IMPACT tapings at Universal Studios. Recently TNA wrestler Sting was attacked by three masked men at a TNA show. While the three mystery men have not been revealed, one of the theories floating around is that it could be three men who formerly spent time in TNA’s competition, the WWE. John Morrison, MVP, and Chris Masters (or Golddust) would be the strongest bets. TNA has recently changed it’s creative vision, as longtime employee Vince Russo quit and longtime WWE employee Bruce Pritchard has taken a key role in the company. The reveal of three ex-WWE employees could even be a return of the old “Monday Night Wars” era of wrestling, when stars of then WCW and WWE would show up on the other shows.

What do you think of these rumors? Have any new ones we missed? Leave a comment at the bottom of the page.

It would be awesome if Universal Orlando got a year round haunted attraction similar to Hollywood’s. I always read about that and think how cool it would be.

Very interesting about TNA also. I am curious to see who shows up!

Some people are saying a year-round haunted house would be boring because, after all, don’t you get bored after going through an HHN house two or three times? I suppose……… but I still think it is a good idea!

Hopefully Universal learns from what “negatives” there are with what currently is in Hollywood. Also, I know more about how often the average Disney World guest hits the park, and I’m imagining they come back even less regularly to Universal. So I think as people who go more often we don’t consider the “99%” of are only going to see something like this once per trip and then not again for several years. All that said, Universal has been on a TEAR lately with Despicable Me ride taking a “so so” experience and making it one of that ride genre’s… Read more »

For me the more I go through a house, the more and more I like it, unless it was bad to begin with. I think it would be great for the people who can’t make it to HHN. Would give them a way to sort of experience it and might even entice them to make the extra trip back to attend HHN.

On some boards, there is also talk going around that the rumor released about SS44 becoming a haunted house style attraction was actually mis-information released by Universal to find out where the leaks were internally.

Some insiders are also pointing to the SS44 plot becoming a clone of Transformers, set to open in approximately 13 months.

All speculation at this point, but I thought it important to add to the post since there isn’t any agreement from some of the usual insiders I know as to what will actually be going in there.

As I’ve mentioned a few other places, I just don’t see Transformers happening. It is identical to Spider-Man, and unless Disney is buying out all of Marvel (which I think would be pretty big news, and we’d have some more hints about it), there’s no reason to bring Transformers here. Plus, it doesn’t fit in that area like a year-round HHN house would.

I’d like to see Universal go back to their roots with an HHN house.

Or is it the musical Wicked that’s coming to SS 44?

That would be “Wicked” cool. Not.