Much attention has been paid to Harry Potter and the Forbidden Journey, The Amazing Adventures of Spider-Man, and Revenge of the Mummy.  And for good reason – these are easily some of the best attractions in all of Orlando (and, according to many, in all of the world).  Very little has been said of the flip side of the coin, the weaker stops that Universal Orlando has to offer, though, and since I strive to provide the best possible experience for the guest – particularly those who, like myself just last month, have an extremely limited amount of time to spend at the parks – I want to give you sufficient advance notice of what to expect.

But this doesn’t (necessarily) mean you should skip these rides!  Indeed, most of these offer some of the best theming details you’ll find in Universal’s little neck of the Orlando woods.  Think of these, then, more as side dishes in-between the main servings of the (Harry Potter) feast for those with longer stays.

The last of the original rides to open with the park a little over 20 years ago, E.T. Adventure offers the most traditional, Disney-like dark ride experience to be found at Universal.  Part of this is the problem, however – despite some wonderful moments, including a Peter Pan-esque fly-by over a city and one of the most atmospheric queues in the history of themed attractions, the herky-jerky movements of some of the animatronic figures and comparatively-threadbare production values really betray the age of the ride.  Even worse, E.T. strikes both of the worst theme park chords:  a strict regurgitation of the source material in some scenes and a completely non-sequitur story in all the others.

Twister seems to work best in the in-between stage:  after the initial, borderline-tedious intro (essentially a “behind-the-scenes” DVD extra narrated by the film’s stars) and before the main thrust of the attraction (watching the twister unfurl), when the audience is in Auntie Meg’s storm-addled house.  The TVs crackle, cats mew in distress, the lights flicker… it’s engrossing, but it’s short-lived.  Bill Paxton and Helen Hunt yet again discuss both the movie and what is about to come, and then what comes simply doesn’t live up to either the creepy atmospherics or the potential of the premise.  This is partially thanks to similar, stronger-executed spectacles at other parks, but mostly due to a very fake cow being zipped on a very obvious line right in front of the audience’s faces.

It has to be said:  the combination of actors, animatronics, and 3D footage is extremely clever, particularly in how the one-screen theater metamorphizes into a three-screen, Cinerama-esque experience.  The inclusion of all the original actors is similarly a nice touch – but the carrying over of every plot point, character beat, and action-set piece isn’t.  There is not one new idea in the entirety of the 12-minute movie, making T2 3D feel singularly derivative (a shame, since such thought was put into its presentation and live action/film interaction).  Add in James Cameron’s penchant for names or story riffs that are outright ridiculous – the T-1,000,000 is dispatched to kill John Connor once and for all (no, really this time) – and the result is a recipe for the cheesiest of cheese.

Take Cat in the Hat’s penchant for spinning, combine it with Toy Story: Midway Mania’s laser-tag hook, and garnish with set design that has the decided feel of cardboard cutouts, and Alien Attack is the result.  It’s a fun ride that tries for all the world to be a zany, madcap experience, but it falls short in every category and in every instance.  For thrills – or just plain, old-fashioned fun – Revenge of the Mummy is superior in every conceivable way; for humor, next-door-stop The Simpsons has it beat.  (Even Cat in the Hat bests it in the silly spinning category, despite Men in Black’s technological improvements on their shared ride platform.)  At least there’s the ambivalent presence of Will Smith…

There is literally only one good thing that can be said for Poseidon’s Fury:  its art design is second-to-none, ranging from its much-discussed (and often malfunctioning) water vortex tunnel to the show building itself, which promises prospective attendees the adventure of a lifetime.  What they get instead, however, is an attraction – complete with dialogue, characters, costume design, and, sadly, even special and visual effects – that is so horrid, it would be extremely comical if it weren’t so embarrassing.  The final showdown alone between Poseidon and Darkanon is easily enough to make one banish the entire experience from her memory.  Indeed, if Walt Disney said that story is king in any themed attraction, he is more than rolling in his grave.

Ready to debate my observations? Leave a comment below!

previous SeaWorld: "Encounter" sharks in a new way
next Take a wild ride on Kilimanjaro Safaris 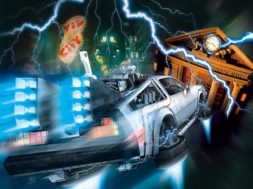 I totally disagree with MiB being included on the list, but otherwise the critique is pretty accurate.

I agree with you. I was surprised to see MIB on the list, although, to be perfectly honest, I’m not crazy about the ride. But that’s just me — I know its a huge fan favorite.

The attraction that is missing from the list, which most people seem to dislike, is Disaster. Strangely enough, I actually like Disaster considerably more than MIB. Go figure.

My wife and I loved Disaster!  Maybe it has something to do with the fact that I’m a filmmaking kind of guy, and that attraction employs some nifty tricks up its sleeve.

I was really surprised by my almost complete apathy towards Men in Black… but even more surprised by my almost vitrolic hatred of Poseidon’s Fury.  I made it a point to see that show, right before our lunch at Mythos, and I couldn’t have been angrier over the choice.  Even my wife found little to enjoy in the experience.

(But the art design *is* downright impressive.)

I would have to say I agree with it all as well, except for MIB. MIB is probably my favorite ride on the USF side of the park though. I could see adding Disaster! in place of MIB like OI said, and not because it isn’t a good attraction, but more because after doing it once it lost a lot of its appeal for me. I think the attraction I would absolutely add in place of MIB though is Beetlejuice as I’m just not a fan, I always found him super-weird even when he was in his heyday.

Yeah… I thought “Fear Factor” was… unimpressive.  But I didn’t want to include anything that was a straight show.

I didn’t get the chance to see Beetlejuice, even though I really, really wanted to.  Next time, I suppose.

I too was very surprised to see MIB on the list.  Of the interactive “shooter” attractions in Orlando, I prefer TSM over MIB, but MIB is better than Buzz.

I have a soft spot for Poseidon’s Fury because it has a ton of potential, but the dreadful story re-write kills it.  Story is indeed king, and the original story seemed great.  A few edits would have made it perfect.  Poseidon vs. Zeus > Poseidon vs. Lord Darkenon.

Every attraction listed here are all of my favorites at the park lol Well, not including Poseidon’s Fury, I can do withouth that one. My top 3 at Universal are MIB, E.T. (even moreso after our recent visit) and Twister. I won’t get into why I love each of them, but I do want to touch base on E.T. I just love how it is a traditional dark ride, that takes you through real scenes vs. movie screens or projections. I like being completly immeresed in something, being able to see things that are really there and not on a big… Read more »

Y’know, it’s funny… the more I think back on Twister, the more it grows on me.  Go figure.

This list kind of sucks… #1 – Poseidon’s Fury wasn’t great, but far from the worst attraction at Universal, IMO. My least favorite has to be Pteranodon Flyers at IOA… Long wait for a stupid roller coaster. #2 – Men in Black continues to be my favorite shooting dark ride, and would prefer it over Toy Story Mania and Buzz Lightyear at Disney. In fact, this ride fits more in the BEST list. My number 2… Woody Woodpecker’s Nuthouse Coaster. Kind of lame, #3 – Terminator continues to be my favorite 4-D show, and would prefer it over Shrek 4-D,… Read more »

This is just 1 person’s opinion, so also keep that in mind. These rides are completely subjective. Try them all 🙂 For me, its Twister. nothing happens. I think Twister is FAR FAR worse than Poseidon’s Fury. MIB isn’t bad at all!! I enjoy MIB, I love how interactive it is. Its just plain fun. Poseidon’s Fury is pretty cool too. I don’t think they should be on the list but that’s me.  I personally would put Minion Mayhem on this list,  as the #1 ride that’s not worth its average wait time. The lines have been so long lately and boy was… Read more »