Our family just made our annual Christmas trek to Universal’s Islands of Adventure for the special yearly event of Grinchmas. Once we’ve been here, we KNOW Christmas is not far behind.

Seuss Landing is transformed into Whoville for Universal’s holiday festivities, the town featured in the Dr. Seuss’ story How the Grinch Stole Christmas. And if you’ve seen the movie by the same name, everything looks authentic, including the main character, the Grinch. We love the decorations, the team members happily calling out “Happy Wholidays” and “Merry Grinchmas” — the atmosphere is one of celebration and joy.

Some history:  Grinchmas came to life in December of 2000, a year after the Islands of Adventure opened. With one exception, the celebration has been annual. 2006 was a real let-down for those who visited the park and found there were no decorations, no Grinch’s Lair, no music, no Whos. It was as if the Grinch HAD stolen Christmas. Happily, Grinchmas returned in 2007 to a grateful audience, along with the new High in the Sky Seuss Trolley Train Ride. However, still missing was the Grinch’s Lair, which had occupied the space previously. The Lair looked JUST LIKE the scenes from the movie. As you waited in the cave-like queue, you passed all kinds of instruments and concoctions, many of them interactive, fashioned to look like those in the movie.  Also, the wait didn’t seem long because but they had the movie running on monitors made to look like they were trash. I just wish Universal execs would realize what a HIT this was with guests and bring back the attraction.

I remember the first Grinch we met in his Lair. You would have sworn it was Jim Carrey in that Grinch suit! He and my husband exchanged verbal barbs. Yet, when the Grinch talked to our daughter, there was no doubt his heart had grown three sizes. That guy was amazing with his recreation of the movie’s Grinch. Our daughter was invited to sit with him in his oversized recliner but she sat on the edge. In his best Grinch voice he asked her to scoot back.  Being Downs, she didn’t understand his direction, so after a few seconds he belted out, “Well, alrighty then. I’ll scoot UP!” I know he talked to her for a whole five minutes. Subsequent Grinch’s brought the same authenticity to the role. One year, after the picture, the Grinch got up and walked us out through the exit, holding our daughter’s hand the entire way. (You can read more blog posts about the history of Universal.)

This year’s Grinch is no exception; he is wonderful in the role. It is a delight to meet him in the All The Books You Can Read store for a picture session.  And yes, you can take photos with your own camera. You will be given a card to take to any Photo Connect counter to see and purchase the professional photo, good for that day only. Don’t pass up this opportunity. Parents will love it just as much as the kids.

Another favorite part of our visit is the musical, the Grinchmas Wholiday Spectacular. Showtimes are listed in the in-park guides available at the front gate of the park.  The Dr. Seuss classic is retold on stage with music by Mannheim Steamroller, so you know it has to be terrific. It will keep even the youngest child enthralled, and a cast member signs the entire show for those with hearing disabilities (check the park map for the times when a Sign Language Interpreter will be available).

The entrance to the theater, Soundstage 19, is located between the Circus McGurkus Café Stoo-pendous and the book store. Just follow the signs. Many of the songs are from the original cartoon version of How the Grinch Stole Christmas, also used in the movie. It’s a BLAST! Here is a short video I took:

You can see photos from the performance in the photo gallery at the bottom of the post.

Much of our admiration is for the Whos themselves. Their makeup is stoo-pendous, and no matter how long you stare at the noses, they look like the actors really did grow into them! Costuming is beautiful and authentic. Meeting the cast as you stroll through Seuss Landing is a real treat, and they make you feel at home in Whoville.  We asked “Martha” why she doesn’t have a Who nose, but like a woman’s age, we were reminded that’s a question never to be asked nor answered. I said that I thought it was because Martha was perpetually young, and both she and the Narrator deeply nodded and smiled widely, but said nothing.  The Narrator actually performed in the 2000 production and was happy to hear we remembered. Members of the cast also carol as they meet guests.

For us, Christmas just isn’t Christmas without a visit to Islands of Adventure’s Seuss Landing for the Grinchmas celebration. I hope you’ll consider it a must for your family, too! Merry Grinchmas to ALL!

Learn more about the holidays at Universal Orlando 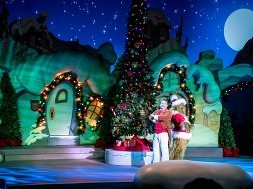 Thanks debi for sharing your family’s story with us. The holidays are certainly a great time to visit Universal.