In case you had any question whether or not September, October, and November are slow months in Orlando, the surest sign arrived in our inbox this morning: Rates as low as $129 for Universal’s on-site hotels: 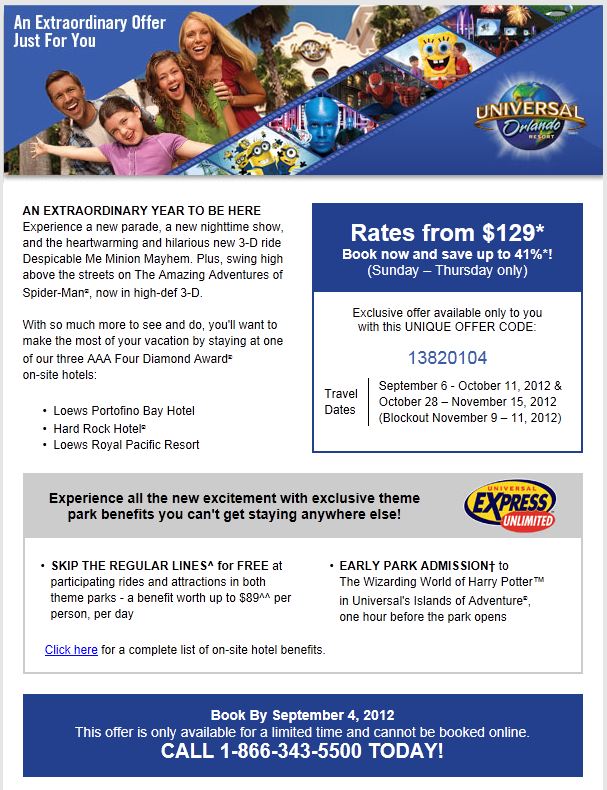 For those of you who may be unfamiliar with Universal’s on-site hotels — Royal Pacific Resort, Hard Rock Hotel, and Portofino Bay Hotel — during peak season a standard room can run up to nearly $300 per night. That makes $129 almost a third of the highest rank rate. So, yes, the autumn months are certainly a good time to visit. And not only do you get a great rate on your room, but it will finally have cooled down a bit!

Unfortunately the theme parks don’t follow suit, so you will still need to pay the same price for your admission tickets.

Here are a few links if you’d like to learn more:

Top 12 easiest ways to save time & money at Universal

PS. I think it is interesting that the promotional image I included above specifically mentions that November 9 – 11 are blocked out after already stating that the rates are only valid Sunday through Thursday. I see that November 11 is Veterans Day, but that by itself doesn’t usually bring up the crowd levels much. Is there a special yet-to-be-announced event happening then?

previous From the black lagoon: Weekly rumor round-up for Orlando's theme parks
next Endless waves of Halloween fun at SeaWorld every weekend in October 2012

Figures our dates wouldn’t be in the promotion!  Isn’t Nov 9-11 about the same time they had the big Harry Potter event last year?

It was the same weekend, but the dates were slightly different (Nov 11 – 13).

By the way, for anyone interested, we have a great write-up on our site about the Harry Potter film celebration event.

I just called the phone # listed and also called RPR directly. The resort told me that this discounted price can only be offered to the recipient of the email where the offer was sent. I assume the email was sent to you, so only you can book with this discount. Therefore, I am unable to take advantage of this offer. The resort said they’ve had a few other calls regarding this same matter. Just thought I’d give you a heads-up.

I was aware that this might be an issue. However, I assumed that they would still honor the price for anyone. When I worked in hospitality sales, the basic rule of them was that, if the consumer knew of the sale, he or she could take advantage of it. Same thing if you call Universal and try to get the Coke discount on an annual pass. They will give you the discount whether or not you have a Coke UPC code. Basically, you get it because you are aware of it. So it strikes me as odd that they would… Read more »

The other thing you can do is sign up for email offers from Universal and hope they send out another round of these… https://www.universalorlando.com/Customer-Profile/emailsignup.aspx

I agree with you. I think it’s good for business to honor these types of offers. Any yes, I did (nicely) try to “push” a little bit for the offer. But they stood their ground. I also asked if I could get on the “same” email list as you (and others). Both representatives I spoke to said they only send these emails to people who have stayed in their resorts before.

Well that’s disappointing to hear. Did you get a quote anyway, just to compare?

No, I guess I was so disappointed about the news that I forgot to ask about a comparison quote – LOL!  I’m already booked for 9/25 under a AAA discount for $190.40. Do you think I can get it at a better rate and how should I do this?

$190 looks like a pretty good rate. I would just check about once a week until you travel. If they don’t book up, they may drop it again.

If you are a Florida resident, here are some more deals for Universal’s on-site hotels: http://www.universalorlando.com/Theme-Park-Tickets/Florida-Resident-Tickets/Hotel-Offers.aspx